With international travel being on hold for most of 2020, this was the year we were supposed to explore our backyards. We did travel to lots of places inside Hungary, and now that 2020 is coming to an end, we’d like to share some newly discovered favorites. 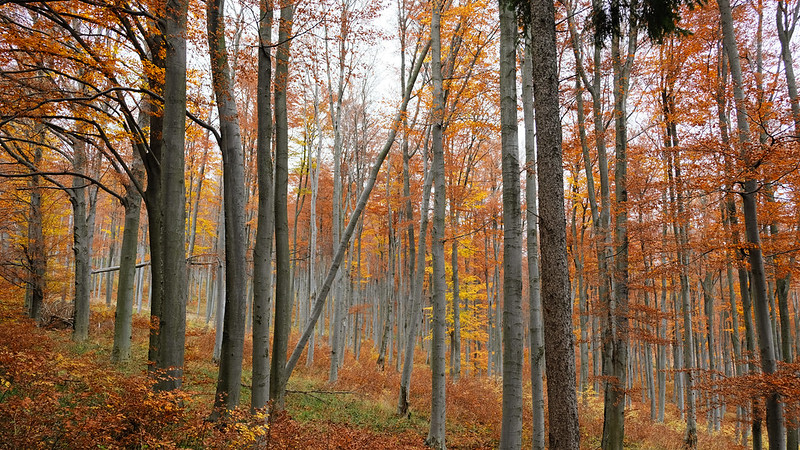 Balaton Uplands National Park is one of our favorites in our country. But it has a fabulous volcanic rock formation – the most unique one in Hungary, actually! – that we haven’t visited until this summer. 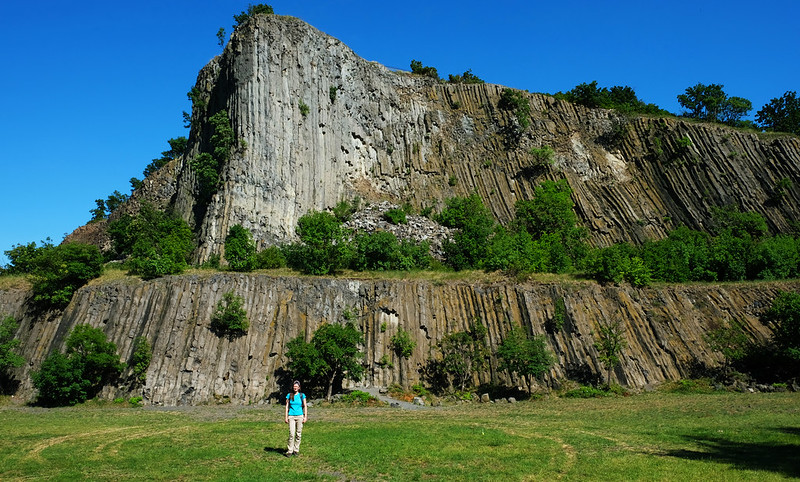 The Hegyestű Geological Visitor Site can be accessed from the road between the towns of Monoszló and Zánka. This protected site was once home to a mine, and the basalt columns of Hegyestű were quarried by hand.

There’s an admission fee to enter the site today, then you can visit an exhibition, and walk to the top of the basalt rock formation of Hegyestű on a well established path. The basalt cone is 337 meters high, and offers a pretty panorama of Lake Balaton, Tihany Peninsula, Káli and Tapolca Basins from the top. 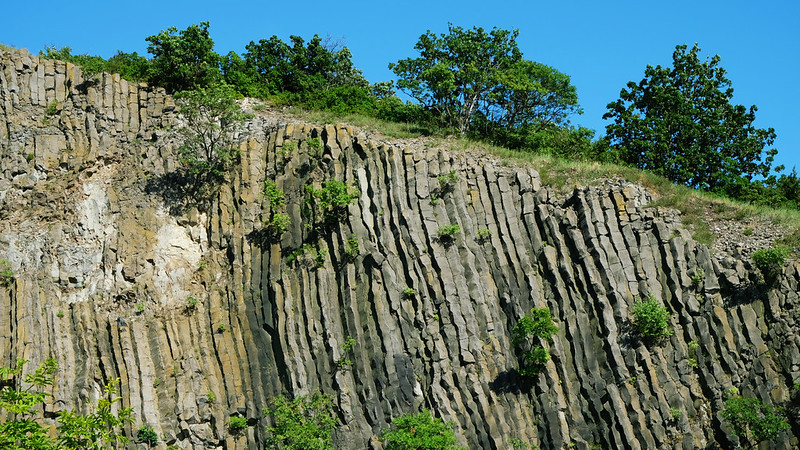 There’s no hike to do here, still we loved it very much. The only place we’ve seen such perfect basalt rock formations in Europe so far was Iceland. Okay, okay, don’t compare this place to Iceland (when it comes to nature, hardly any country can compete with Iceland, anyway), but these basalt rocks are truly unique!

The most famous places in this park are Tihany, Badacsony (and its wines) and Szent-György Mountains. Since we’ve seen them before, we were after the hidden gems this summer – and we did find some nice surprises.

Like the rock formations of Kű-völgy that can be reached on an easy loop trail from the village of Dörgicse. The trailhead itself is quite scenic with medieval church ruins and views of Lake Balaton below. The rock formations are hidden in the forest, and it’s a pleasant hike even on a hot summer day. 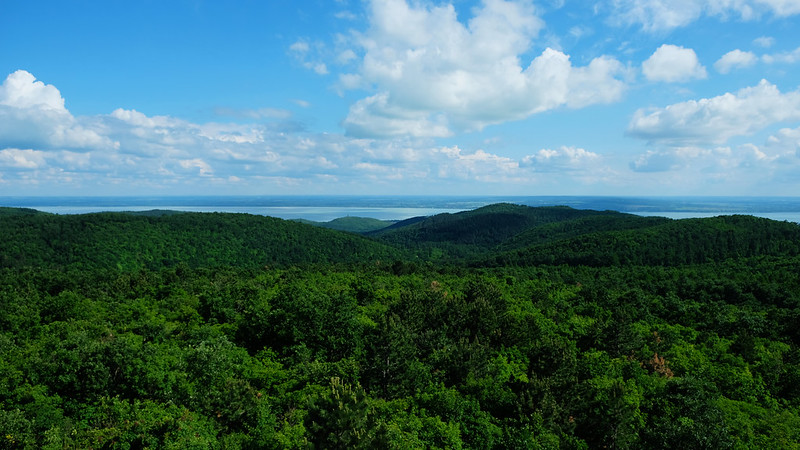 Several viewing towers (kilátó in Hungarian) have been built or renovated in the national park lately, and we hiked to quite a few in the Keszthely Mountains: Festetics-kilátó in Gyenesdiás, Bél Mátyás-kilátó in Balatongyörök, Berzsenyi-kilátó and Kitaibel Pál-kilátó in Vonyarcvashegy. They offer panoramic views of Lake Balaton and the green hills and forests of Balaton Uplands, and they can be reached on lovely forest trails starting from the mentioned lakeside small towns.

We also liked the moonlike landscape of an abandoned mine near the Nagymező picnic area in Gyenesdiás. It’s a man-made phenomenon but very picturesque. 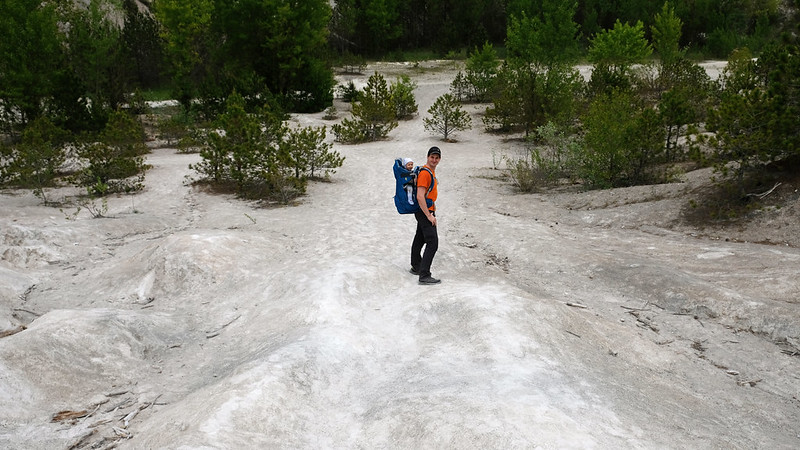 We’re sure we’ll return to Balaton Uplands National Park next year, as well, just like we did in the past couple of years. 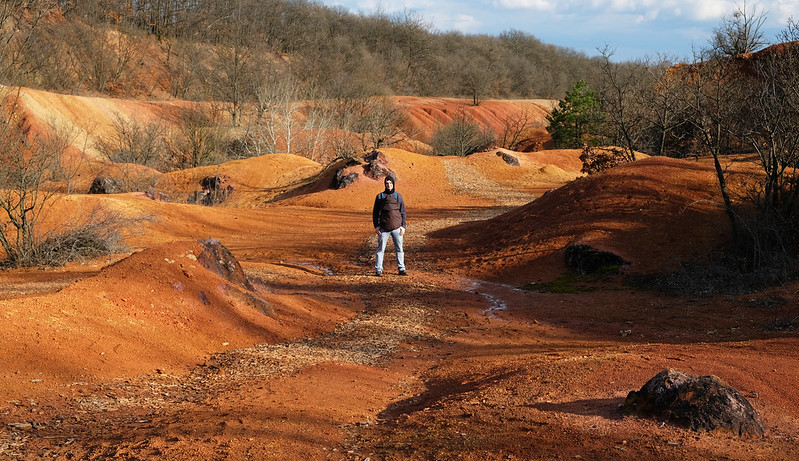 This one is actually a cool half-day trip from Budapest and exceeded our expectations. The abandoned bauxite mine of Gánt can be explored on an easy, 1 hour loop trail, and rewards with views like those on planet Mars.

The mine worked from the early 1900s to the 1980s. Today the place is called the Bauxitföldtani Park of Gánt, and an educational trail was established to give access to the otherworldly landscape of the mine. Visit it on a sunny day because that brings out the colors the best. 😉 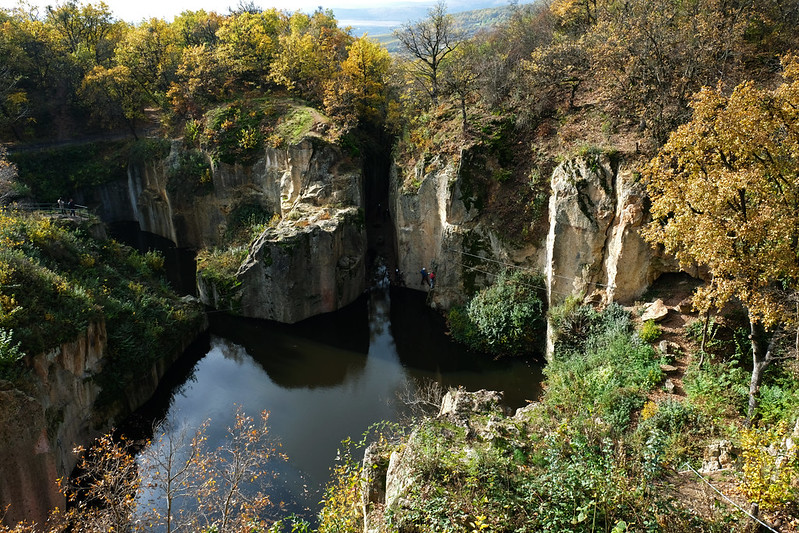 Megyer-hegy Tarn is one we’ve been planning to visit for a while – “for a while” meaning ever since everyone and their mother started posting pretty pictures about it on Instagram. We expected it to be nice but not to live up to all the perfectly edited pictures we’ve seen about it. And that was right.

Megyer-hegy Tarn is an abandoned mine. (Yeah, again.) Once millstones were made here, and it was closed in the early 1900s. Then water filled it, it became a protected area that belongs to the Aggtelek National Park, and it also became a favorite spot for Hungarian photographers. 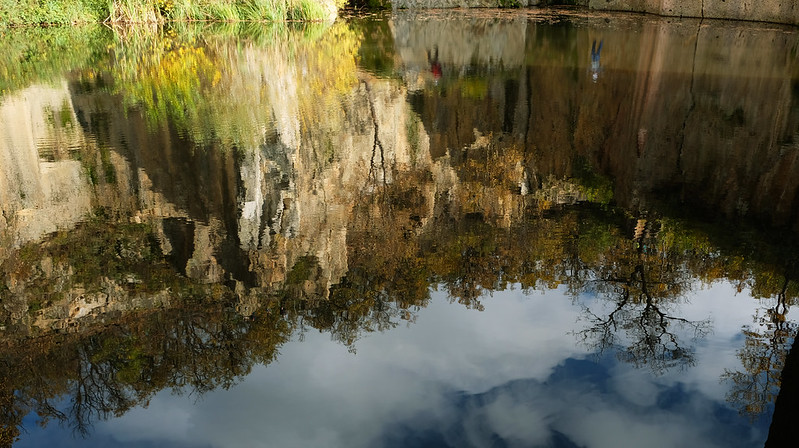 Today a short and easy hiking trail leads to the tarn from the parking lot. We could take a loop around it on a safely established trail with fences, then went up to a viewing tower that offers 360 degrees panorama of the landscape, including the city of Sárospatak and the Zemplén Mountains in the north. (The tarn can’t be seen from the viewing tower, the pictures that show it from above are taken by drone.)

If you like adventures, there’s a via ferrata trail in the tarn, and you can borrow all the necessary equipment on the spot.

All in all, we found it nice, but it’s quite small. We visited it in November, and unlike other places in this region, it was relatively busy. Needless to say, it doesn’t look like the drone shots about it. We still liked it, and wouldn’t say it was a disappointment, just don’t have your expectations too high. It’s a lovely nature walk, that’s all. 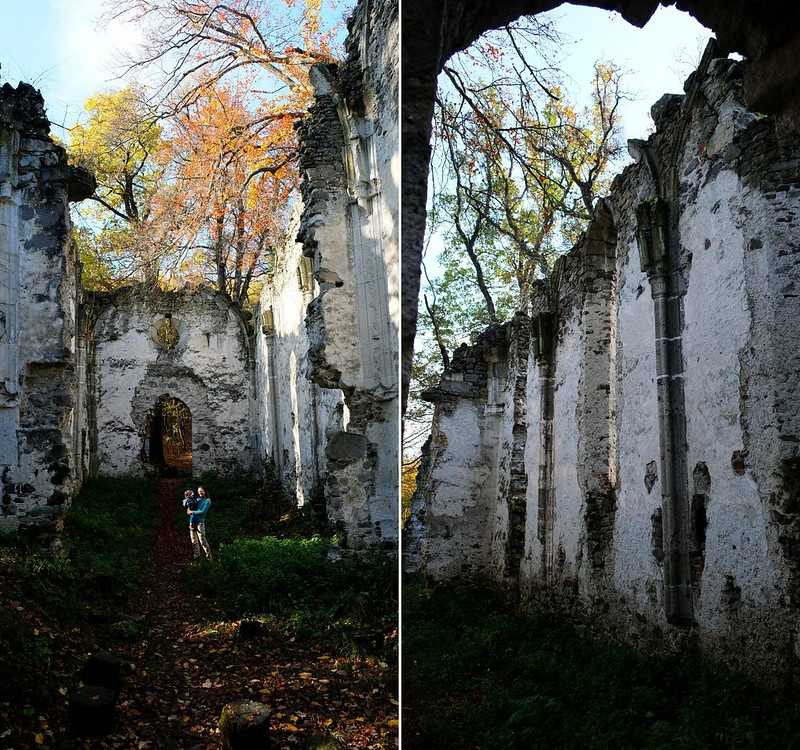 Zemplén Mountains are in the northeastern corner of the country, and that’s the exact reason why it took us so long to visit it. But we should have spent more than just a weekend there. It offers lots of lovely forest trails that are probably the least visited in Hungary.

We especially liked part of the Rákóczi Heritage Trail which we hiked from Telkibánya to the Amádé castle ruins. The highlight for us was the abandoned ruins of a Pauline monastery from the 14th century, hidden in the forest. They’re the coolest ruins we’ve ever encountered in Hungary!

By the way, Rákcózi Heritage Trail is a 60+ kilometres long walking trail that takes you to all the natural and cultural sites that are connected to II. Rákóczi Ferenc, a significant figure of 18th century Hungary. Completing this trail means exploring all the noteworthy sites – towns, ruins, castles – in this region. This is something that tempts us back, especially that several castles went under renovation shortly before our visit. 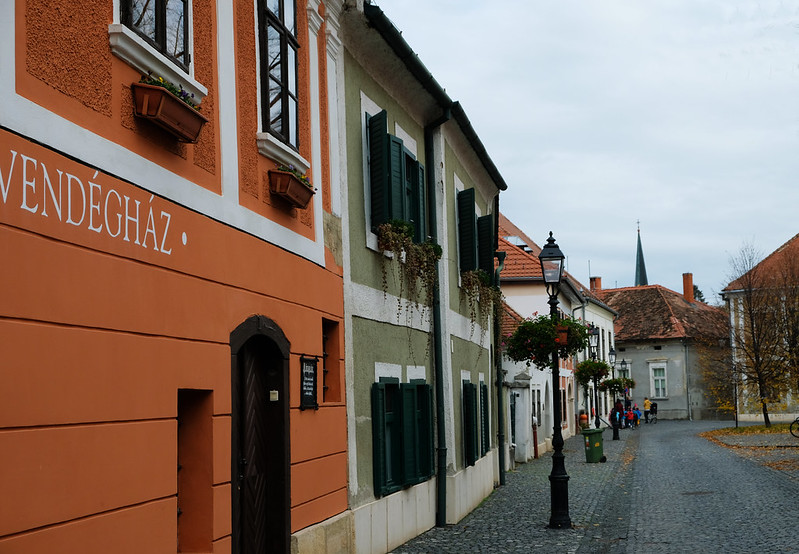 Close to the Hungarian-Austrian border, Kőszeg has a little jewel box of an old town. The historical houses are nicely renovated, we especially liked the beautiful Baroque Jurisics Square, Main Square, Chernel and Rajnis Streets. Jurisics Castle offers exciting insight into history, and the lake called “Csónakázó-tó” is perfect for romantic walks (unless you try to keep your stubborn toddler from walking right into the water in the November chill all the time, #parentingchallenges).

We only spent a couple of hours in Kőszeg which was enough to walk around the historical town, but not enough to visit museums, like the old Pharmacy Museum or Jurisics Castle. They wouldn’t have been very exciting to our boy, anyway, so I guess we need to return some years later. 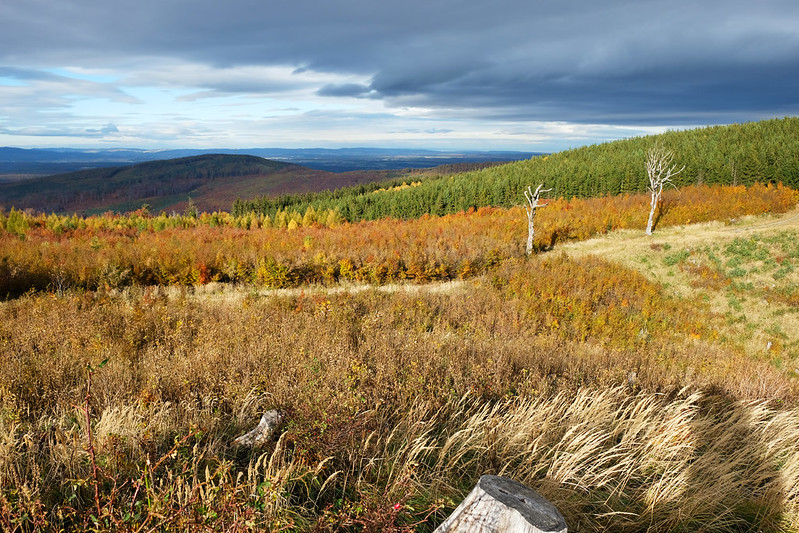 So we actually went to Kőszeg for hiking (surprise, hah?). Even though we like joking about Hungary not having real mountains (aka 1500+ mountains), in the 500-1000 range there are so many that some of them we haven’t ever visited (yet). Kőszeg Mountains on the Hungarian-Austrian border was one of them, and this year we chose the most perfect time to take a trip there: the beginning of November when the seasonal forests are in their autumn glory. 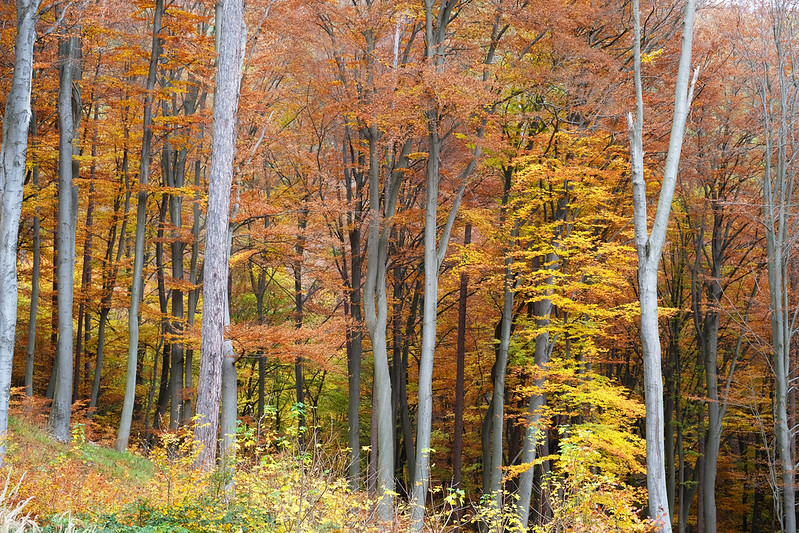 Of course, we fell for the lovely forest trails, the natural viewpoints and the panorama from the viewing towers. The area is part of Hungary’s Őrség National Park – which is another park for us to be explored more thoroughly. 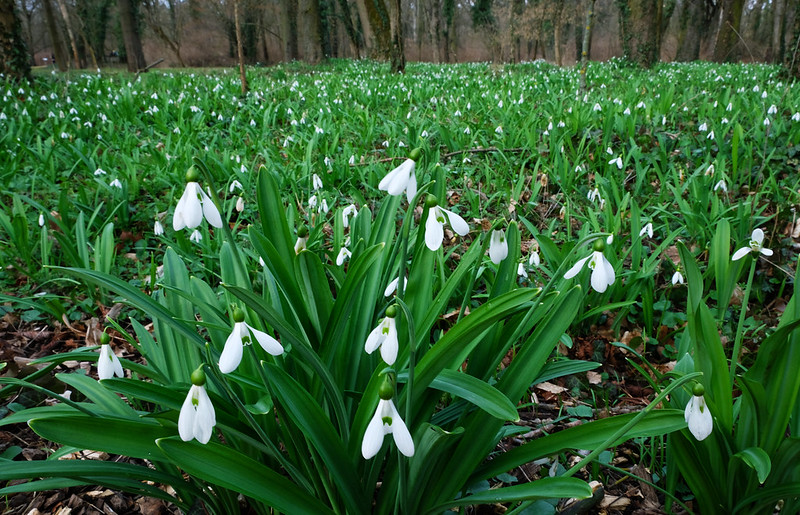 This large English park near Budapest is famous for having the largest snowdrop field in Hungary. We visited it for this exact reason late February, and the snowdrops were spectacular. Beside that there’s a picturesque little church and castle ruin, and a lovely park with lots of different tree species. It’s kind of a botanical garden and could be an easy half day trip from Budapest. 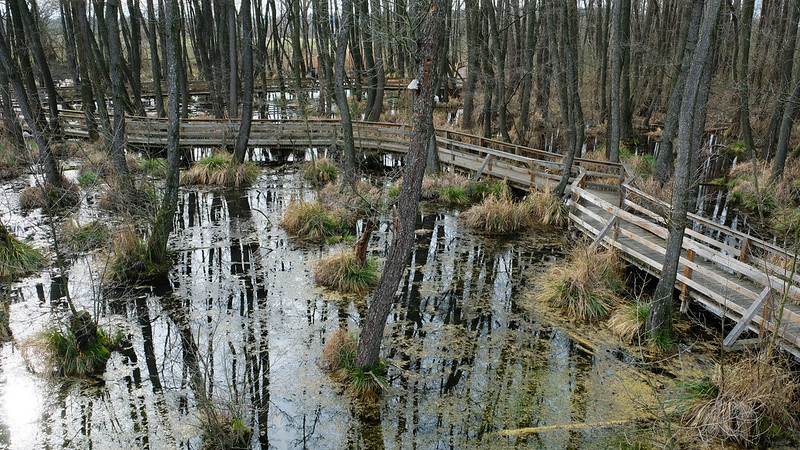 Another exciting half day trip from Budapest is the 1 hour loop trail at the Fényes karst spring. It’s a unique sight in Hungary: the clear spring, 20-22 °C year-round (never frozen, of course), the trees standing in the water. The water from the spring disappeared in the 1950s due to the extensive mining in the area, but it appeared again once the mines were closed in the 1990s.

A bit more than 1 kilometres long boardwalk has been built above the water where we could easily walk around in about an hour (with all the bird-watching and all the pictures taken). Different information boards on the way educated us about this special habitat. 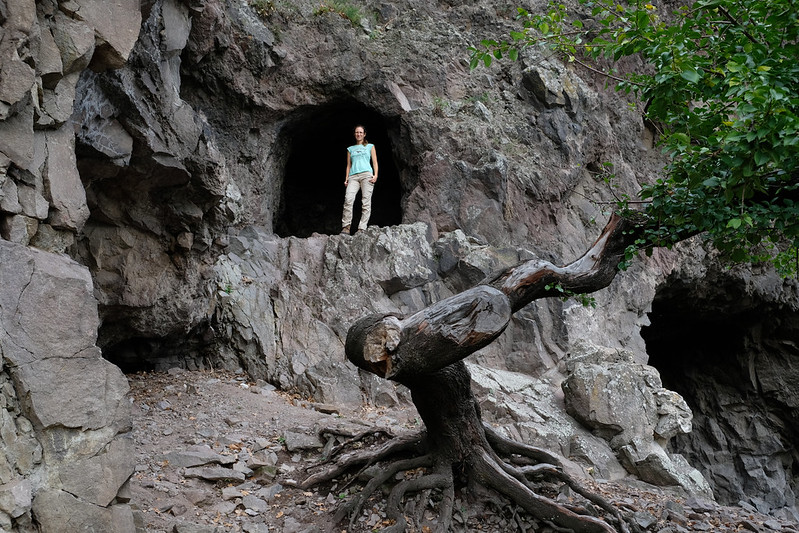 Börzsöny Mountains are part of Danube-Ipoly National Park, and we often hike there. However, the hermit caves are a special destination accessible only on foot through the forest that we haven’t been before. It’s an iconic sight and an iconic viewpoint, too. The caves are partly natural, partly man-made, and their inhabitants were most probably Roman soldiers, then later hermits.

Today it’s a favorite scenic picnic spot for hikers, offering pretty views of the Danube and Pilis Mountains on the other side of the river.

Have you explored some pretty places in your home country this year? Tell us about them!