12 Fabulous Wildflower Blooms For Each Month Of The Year

12 Fabulous Wildflower Blooms For Each Month Of The Year Have you ever planned a trip to see a specific wildflower bloom? Do you have a bucket list of the most spectacular wildflower blooms around the world? Our answer is YES to both of these questions, and if you also have at least one “yes”, you’ll like what we have for you in this post.

Visiting wildflower fields each month of the year is virtually impossible if you stay at the same location. We love hiking in Hungary in spring because of the millions of wildflowers in the forests. When bloom ends in early May, we head to higher elevations outside of Hungary, usually in the High Tatras or in the Alps in our neighboring countries. High mountain wildflowers bloom from April to August, depending on the elevation and the actual flower species.

That’s about the time we can find wildflower fields near our home: from late February to early August. However, we put together a fabulous calendar of spectacular wildflower blooms around the world – with some that we’ve seen, and even more that we haven’t (yet).

January is one of the hardest months to find blooming flowers. But they bloom in Thailand! The 10.000 acres sunflowers fields of Saraburi are in bloom between November and January, and are easily accessible from Bangkok. 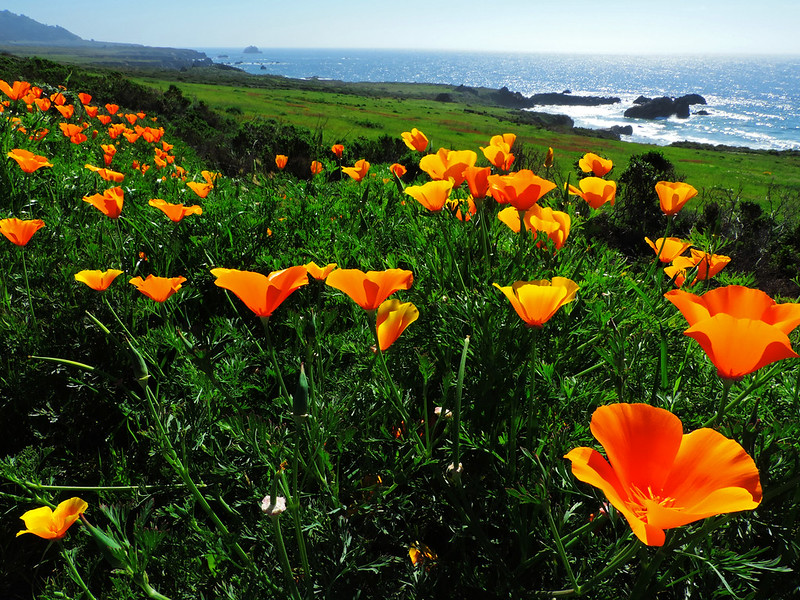 Blooming season and intensity depend on the amount of rainfall during the winter and early spring months (for your information, February counts as early spring in California :)). Superblooms – the most spectacular desert blooms of all – don’t happen each year, but if you’re lucky to catch one… We guess, you’ll never ever forget that! We still have this on our bucket list.

We’ve seen the stunning California poppies blooming on the coast though. Their vibrant orange made the Big Sur coast even more impressive than it is by default. Another popular place to see the poppies is Antelope Valley, about 90 miles from Los Angeles. The bloom usually starts in mid-February and lasts through mid-May.

And what about the deserts? Death Valley wildflowers at lower elevations bloom usually from mid-February to mid-April, a bit later at higher elevations. Deserts turning into a sea of gold, purple, pink and white flowers is a rare and beautiful sight. The wildflower display depends heavily on the current year’s weather conditions though. You can find more up-to-date info on Death Valley bloomings here.

Anza-Borrego State Park is another desert famous for blooming cactus and other flowering plants. It’s located south of Palm Springs, and you can enjoy the blooming from January through March.

What’s more romantic than cherry blossoms? The most iconic one that both locals and countless tourists anticipate each year is the cherry blossom season in Japan. The most famous viewing sights are Kyoto and the island of Hokkaido. Do we need to tell you if we’d ever visit Japan, we’d like to time that visit to see the cherry blossom? Depending on the current year’s weather it happens in March or April. 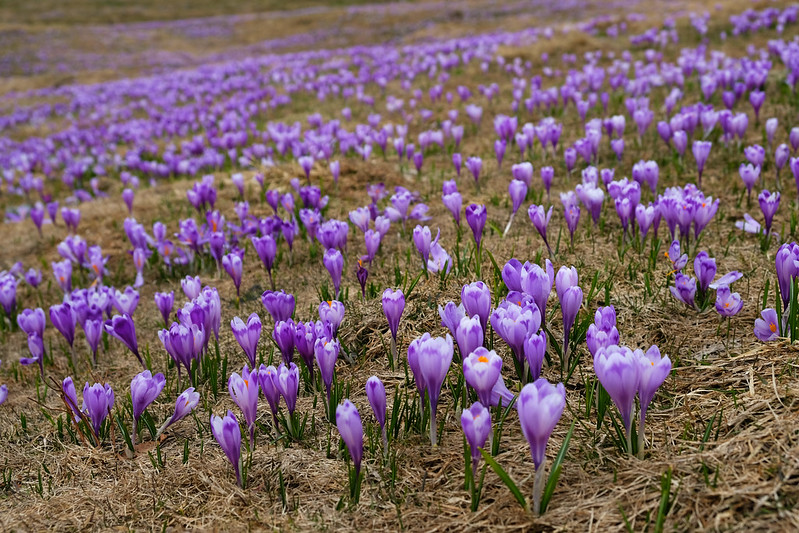 Almost two years ago we timed a hiking trip to Romania’s Apuseni Mountains so that we could see its famous crocus blooming. Our timing turned out to be just perfect to enjoy the violet heaven in the Apuseni Mountains that April!

Crocuses there typically bloom in late April or early May. It depends on how long the winter was that specific year. As a general rule, most of the landscape is still covered by snow when crocuses start to bloom. These tiny violet flowers pop their heads up under the melting snow, and by the time the snow is gone, they are gone, too. 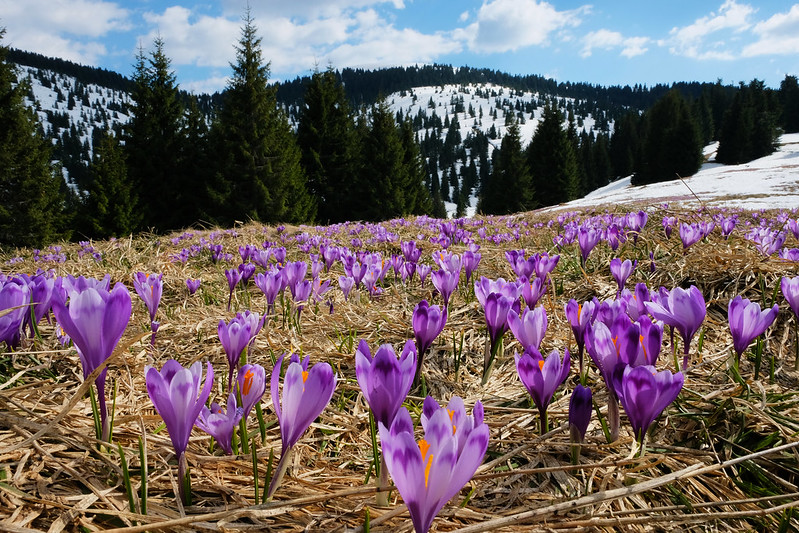 We’ve published a detailed guide about all the places and trails where you can see the best of the blooming – read it here!

May: tulips in Holland

If cherry blossoms are iconic for Japan, tulip fields are the same for Holland from mid-April through mid-May. Time your visit to the end of April or the very beginning of May to see the tulip fields at their very best. But where exactly to go to find them?

More than 6 million tulip bulbs, including 800 varieties of tulip, are planted in Keukenhof Gardens every year. The park is located in Lisse, about half an hour from Amsterdam. Lisse itself is actually surrounded by countless tulip fields that produce flowers for the international market.

Amsterdam is a straightforward place to find tulips, as well. Check out the floating flower market, the tulip festival or just walk in the parks.

Visit one of the many farms in Noordoostpolder that offer guided tours of their fields. Not so surprisingly, the area is exceptionally bike friendly, too. Another excellent tulip region to explore by bike is the small Dutch town of Noordwijkerhout and its surroundings.

June: rhododendrons in the Rodnei Mountains, Romania – Ireland, too!

Blooming rhododendrons can be seen in parks and flower gardens throughout Europe. But there are two places we know where they grow wild and spectacular. 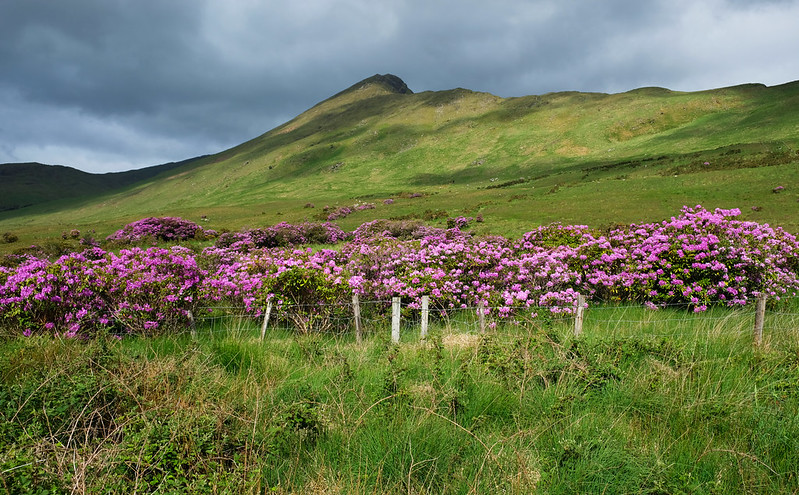 One is Ireland where we enjoyed the pink-purple rhododendrons with the lush green landscape on our road trip in May. Killarney National Park is especially known for them, but we’ve seen a lot in the gardens of Kylemore Abbey or near Killary Harbour, as well, and at lots of random spots along the Wild Atlantic Way. Strangely, aggressively growing rhododendrons are not native to Ireland, they were brought to the island from the Iberian Peninsula in the 18th century and spread quickly.

Another rhododendron blooming we’re yet to see is in the Rodnei Mountains in Romania. Rhododendrons there grow spontaneously in sunny alpine areas – and they’re protected flowers! At 1600-1800 meters, they bloom from mid-May through early June, at 2000+ meters the blooming is in the second half of June or in early July.

Ever since our trip to the Loire Valley, we think rural France is charming and romantic – much more romantic than Paris. While Loire Valley is world-famous for castles, Provence is known for its amazing lavender fields. The landscape with the bright purple patches can be the favorite of honeymooners or photographers – that if you arrive the right time of the year. Which is that? Undoubtedly July, even though you might find some lavender in bloom in June and August, as well.

The most popular areas to find lavender fields are Valensole Plateau, Sault Plateau, Verdon Plateau and the Luberon Valley. You can just drive around and stop at the fields by the road whenever you fancy. The lavender fields of Sault are best explored by bike or on foot though. A 5.7 km “lavender path” starts right after Vallon distillery on D164, and leads you through some of the finest fields. You can also find lavender farms where you can buy lavender.

Other than Provence, do you know where else to find lavender fields in Europe? In the charming little village of Tihany in Hungary! The best time is also July. You can sign up for picking lavender during the Lavender Festival each year, or learn why the volcanic soil of the area is perfectly suitable for growing lavender in the Lavender House Visitor Centre.

August: wildflowers in the Alps and the High Tatras 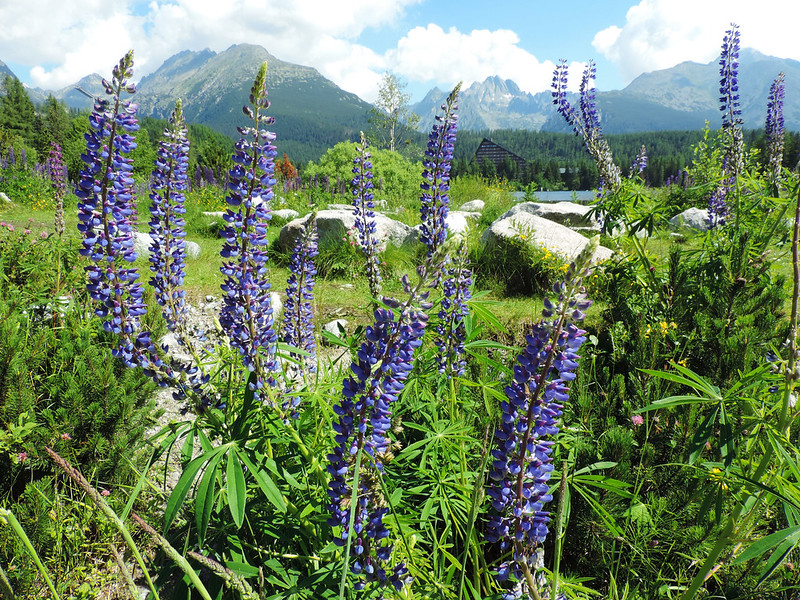 July and early August are the best time to marvel at millions of colorful wildflowers on the alpine meadows. In August, they bloom mostly at elevations above 2000 meters, I might add. Blue Monkshood, Yellow Monkshood, Globeflower, Mountain Arnica, Bellflower, Edelweiss, Primrose, Lupin and what not, they make the meadows a colorful feast for the eye.

Where to go for wildflowers? Anywhere high enough in the Alps in Austria, Slovenia, Switzerland, Italy or Germany, or the High Tatras of Slovakia for that matter. We’ve been to the Tatras the most during the past years, and our favorite wildflower valleys there are Small and Great Cold Valleys, Mylnická Valley, Furkotská Valley and Mengusovská Valley. In addition to the wildflowers, these valleys charm with lovely waterfalls, as well.

Another faraway desert that turns into a vibrant sea of flowers if the right weather conditions are met. The orange sand of Namaqualand desert is covered by orange, yellow, pink, red, purple and white daisies, and countless other wildflowers in the blooming season which is somewhen between August and October.

Visitors can follow the official Namaqualand Flower Route that starts about five hours north of Cape Town, and several hiking trails offer the chance to see the flowers from up-close. However, be aware that the blooms only open when the sun’s out (~ from 10:00 am to 4:00 pm).

October: the colors of fall in Hungary – and where else? 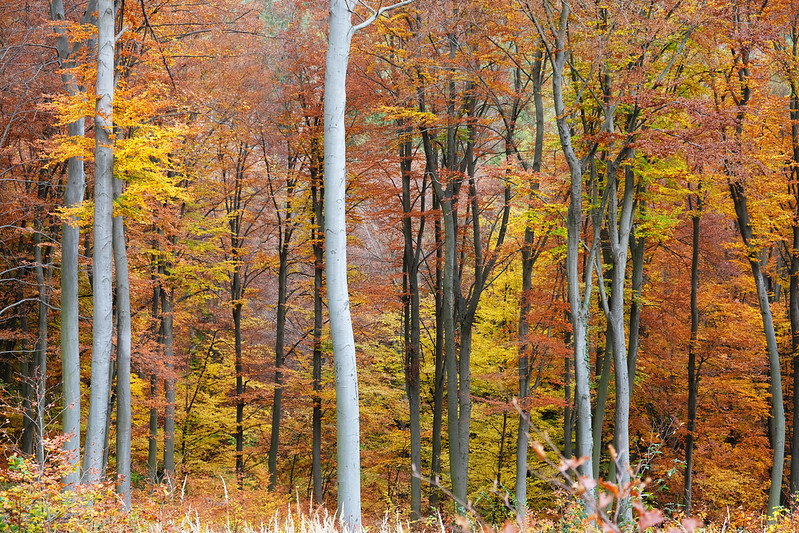 “Autumn is a second spring when every leaf is a flower” – says Albert Camus. Though we don’t fully agree (we like spring better than autumn), our favorite time to hike in the season forests is that few weeks when leaves turn golden, red, orange and brown, and fall is really at its most beautiful. So for October, we suggest you hunt for colorful leaves instead of wildflowers.

We’re lucky that it’s something we can enjoy without travelling far, because Hungary has four seasons, and fall colors from mid-October until early-November are amazing in our mountains and forests. Like Buda Hills and Pilis Mountains near Budapest, Börzsöny Mountains just north of the capital, Kőszeg Mountains at the Hungarian-Austrian border or Zemplén Mountains in the northeastern corner of Hungary.

Most European countries have fall – and a wonderful fall foliage, if you visit them at the right time. This is between September and November based on how north or south that particular country is located. Some famous places to find fall foliage are the Bavarian Alps of Germany (for example Berchtesgaden National Park), the Dolomites of Italy, Plitvice National Park in Croatia, Paris, Amsterdam, the UK’s Lake District or the Scottish Highlands.

But the giant country of the United States of America have some regions that turn a magical feast of colors in the fall, too – like aspen trees in Colorado’s Rocky Mountain National Park (starting in August, peaking in September), the deep reds of the state of Vermont, and also the states of New Hampshire, Connecticut, Massachusetts and Maine.

Australia is known for plants that can’t be found anywhere else in the world. Well, it’s true for flowers, as well. Western Australia is home to 12 000 different species – and about half of them is unique to Australia.

The Coral Coast is just north of Perth. You can go wildflower hunting in Coalseam Conservation Park, Lesueur National Park (blooming orchids!) or Kalbarri National Park. Even if you stay in Perth, you can see more than 1700 native Australian species in its Kings Park and Botanic Garden.

We couldn’t miss the lupin blooming in New Zealand from this list – which is one of our largest dreams to see, along with New Zealand itself! They bloom between mid-November and December, which is summer there.

Lupins grow all around New Zealand, but the most iconic place to see (and photograph) them is at Lake Tekapo in the South Island. As beautiful as they are, and undoubtedly very popular among tourists, lupins are actually invasive species that grow aggressively and threaten native species there.

Did we miss any spectacular blooming? Tell us!