On our first trip to Slovenia we focused on exploring as many natural treasures of the country as we can. Despite of Slovenia’s tiny size, it was a challenge. 🙂 Slovenia became one of our favorite countries in the world, and it tempts us back again and again.

This spring we returned to visit another region, further from the popular tourist path: Maribor and its surroundings. With some pretty historical towns, old castles and Pohorje Mountains nearby, this region makes for a great weekend trip. 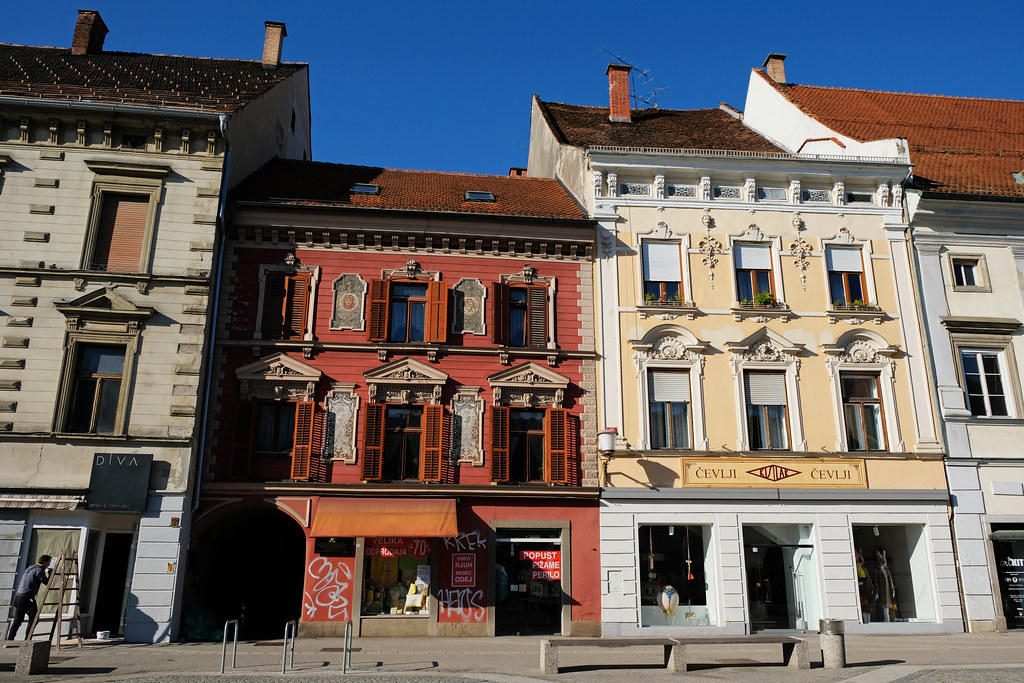 With Pohorje Mountains on one side and picturesque wine hills on the other, lies Maribor. If you’ve been to Ljubljana, the capital and largest city of Slovenia, you might have an idea what the title “second-largest” means: even tinier, but cute, colorful and chilled out. 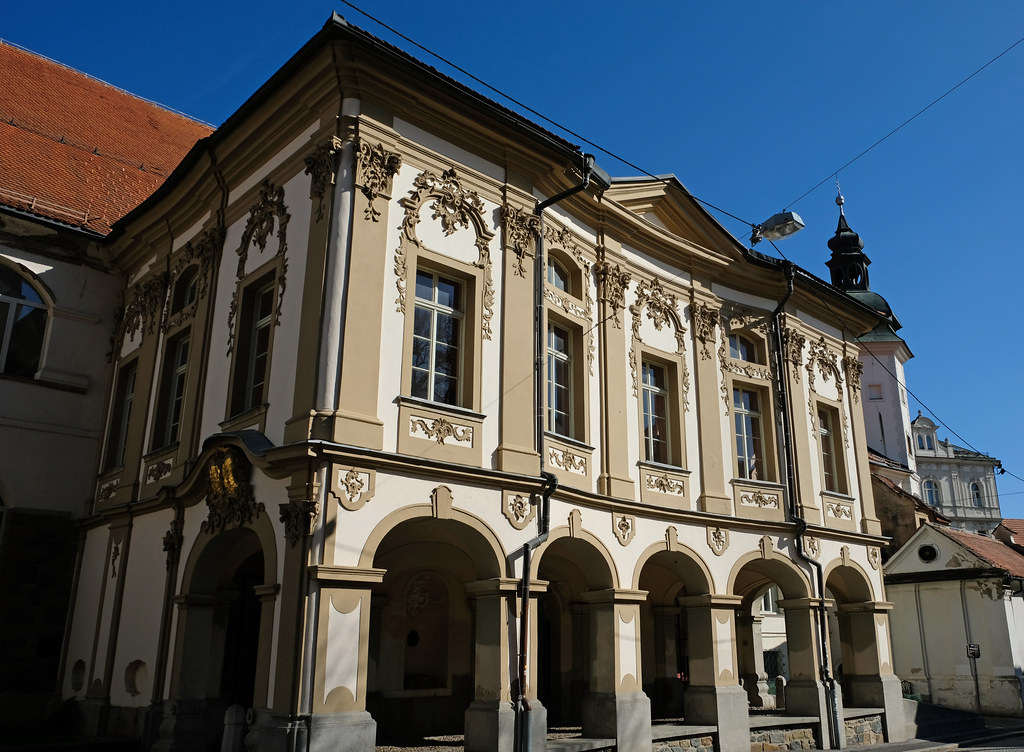 We could find Maribor’s historical center built around two beautiful squares: Grajski trg (the Castle Square) and Glavni trg (the Main Square). Impressive buildings like Maribor Castle, the Franciscan Church, the Renaissance Town Hall and Maribor Cathedral amazed us. But the whole city center is lovely with its narrow walking streets and pastel colored historical houses.

And we found the best ice-cream in town: Iglu Slaščičarna where we got delicious and huge portions of ice-cream and a friendly service. Actually, whichever region of Slovenia we visited, we always found that Slovene people are so friendly and welcoming.

The best views of Maribor 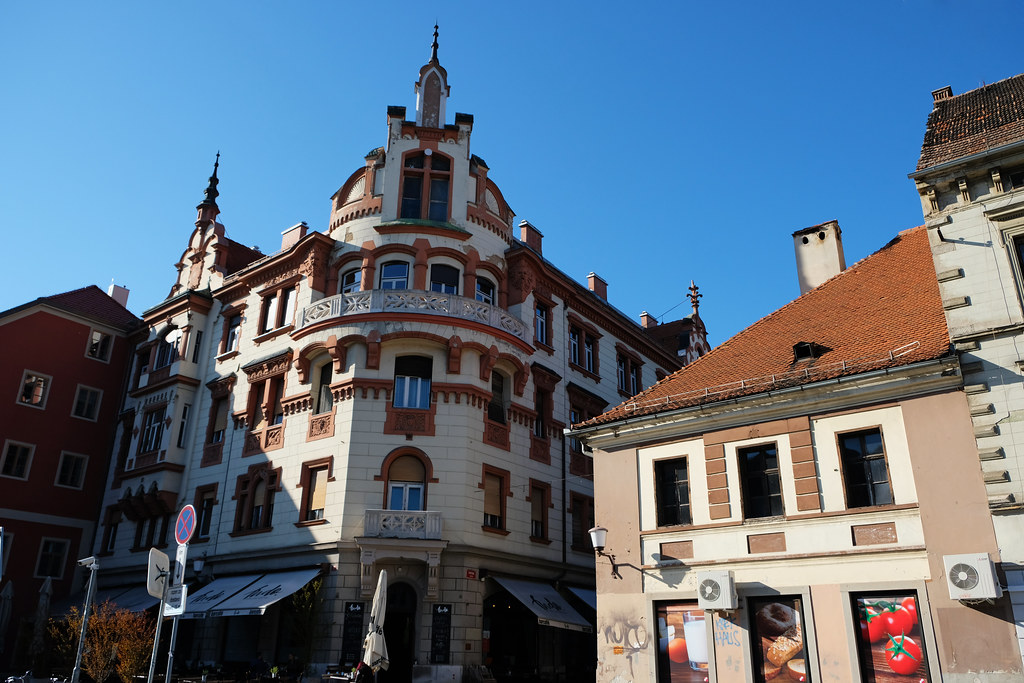 After strolling through the Old Town, we headed to the Drava River. This riverside walk is also nice, several bridges (including a footbridge) offer views of Maribor’s city center.

But for the best views, we hiked up to the top of Pyramid Hill before sunset. The path leads through wineyards, and we could also see the ruins of Upper Maribor Castle at the top.

Ptuj, the oldest city in Slovenia 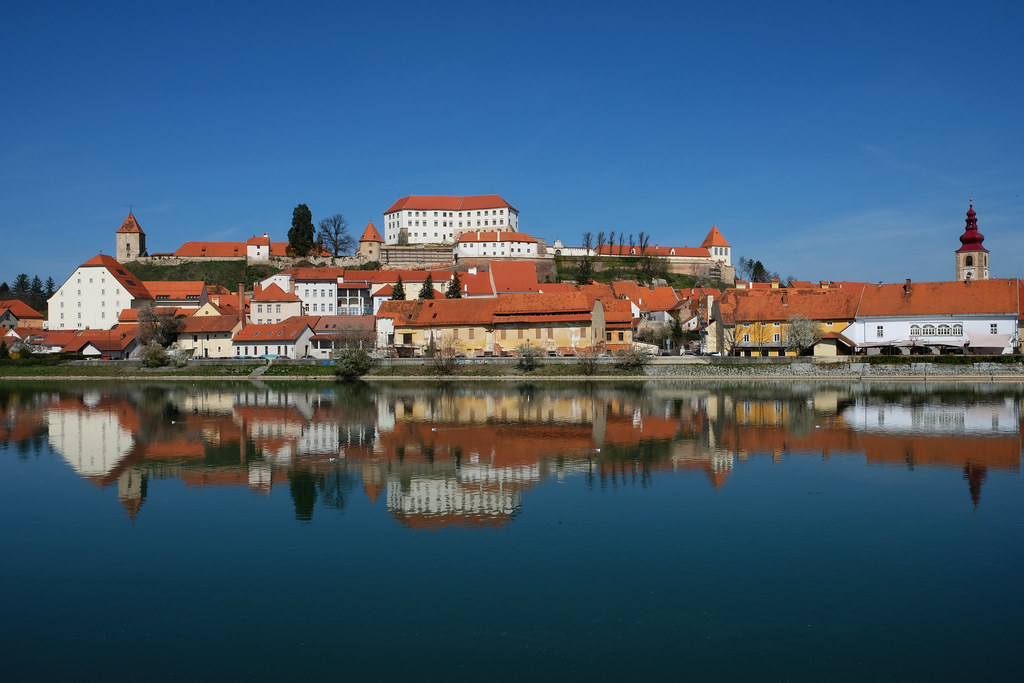 Ptuj is just half an hour drive from Maribor. Inhabited since the late Stone Age, it’s the oldest recorded city in Slovenia. Needless to say, it has a tiny and very pretty Old Town, with Ptuj Castle towering above it.

First, we visited Ptuj Castle. (Hint for the parking: a large, free parking lot is located just behind the castle hill.) It was built in the 12th century, and today it’s a museum, hosting famous paintings, old musical instruments, weapons and folk costumes collection. On the first floor we could also see some nicely furnished rooms and valuable tapestries. 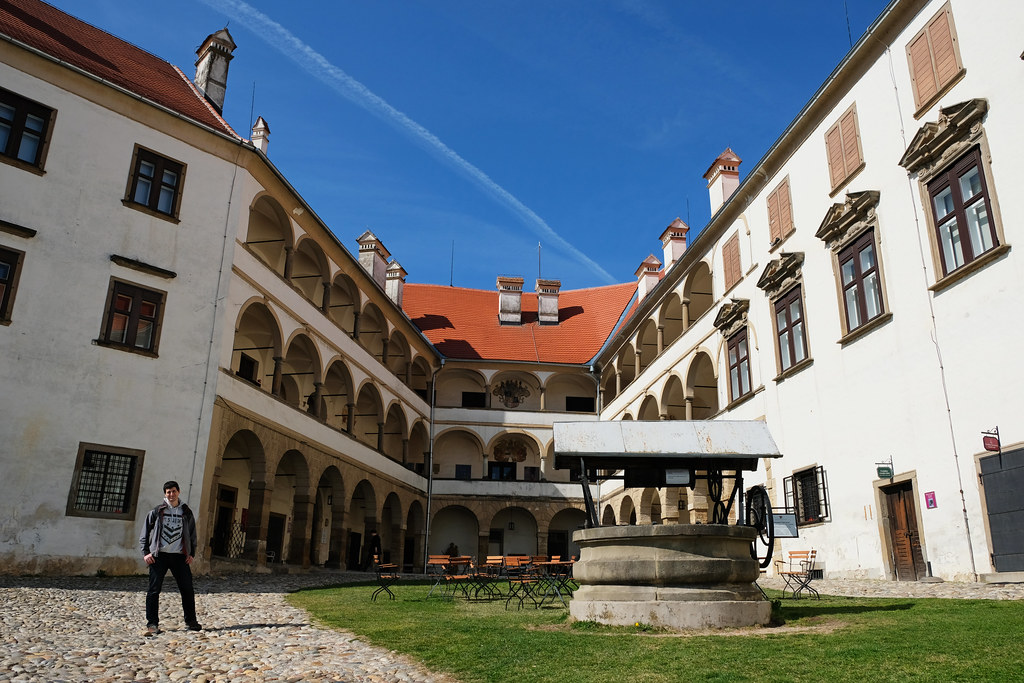 The castle grounds of Ptuj Castle are free to access, and they offer great views above the red-tiled roofs of the Old Town. The main square of the Old Town is dominated by the Town Hall. The magnificent Town Tower can be seen from everywhere. Strolling through the cobbled streets we bumped into wonderful façades from time to time. 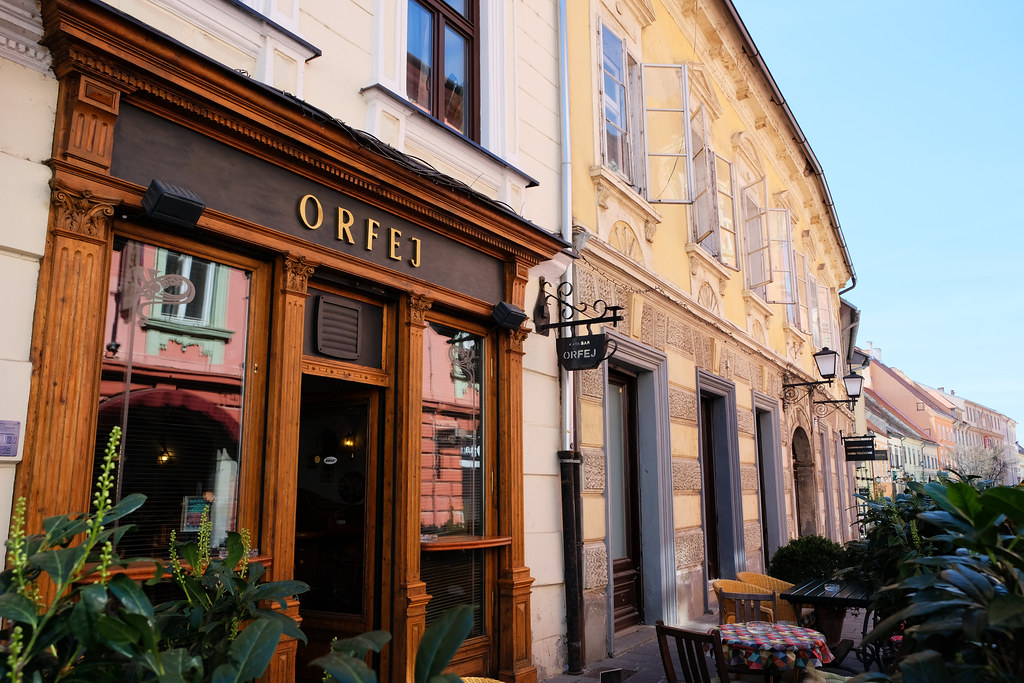 Finally, we crossed the footbridge for the best views: all the red-tiled roofs and Ptuj Castle reflecting in the Drava River. 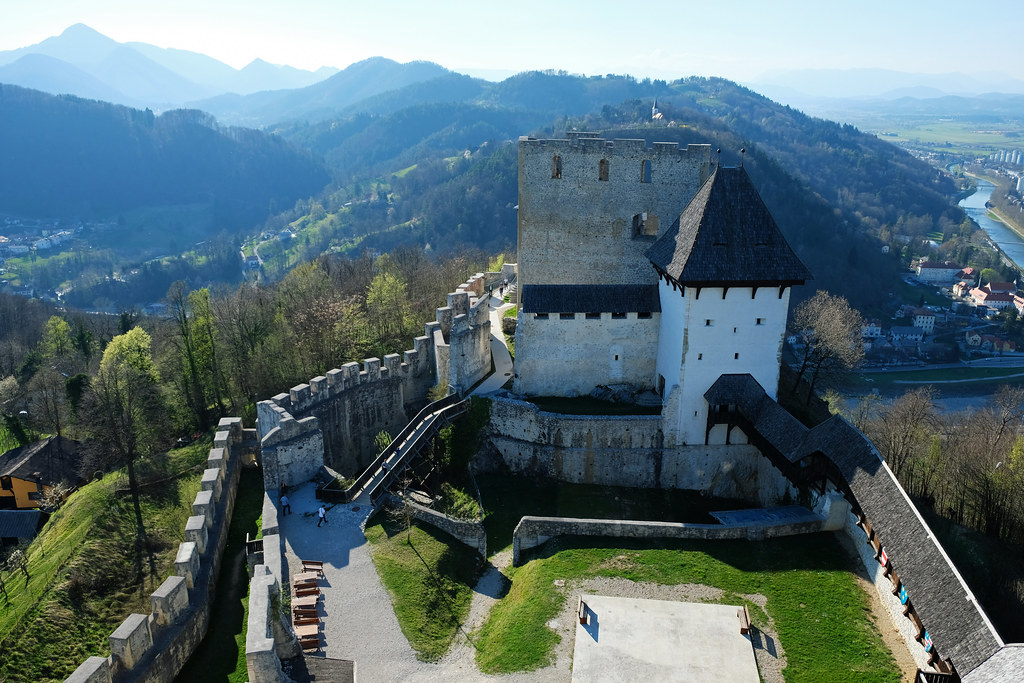 Sitting on the hills above the town of Celje, Celje Castle is also worth a visit. It’s Slovenia’s largest medieval fortress from the 12th century.

But don’t expect furnished rooms there, the castle is mostly in ruins. However, the tallest tower is rebuilt, and we could also walk around on the walls to get some nice views of the surrounding hills and the town below us.

We didn’t have time to walk in the city center of Celje though, because we squeezed in this trip into a weekend, and we wanted to do some hiking, as well. We can’t help it, we can’t resist waterfalls. 😀

Wildflowers and waterfalls in Pohorje Mountains 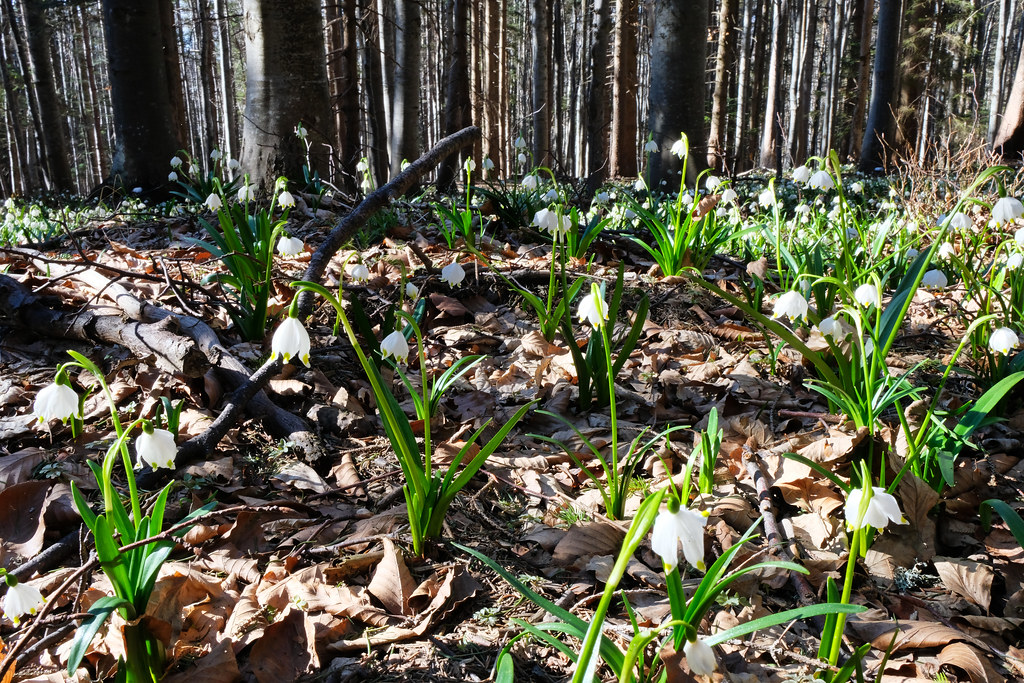 Slovenia’s highest mountains are not in this region. Maribor still offers a nice hiking (or skiing) getaway: Pohorje Mountains. It’s a mostly wooded, medium-high mountain range south of the Drava River. It’s a young mountain massif of the Central Alps, and its highest peaks rise above 1500 meters.

Visiting in March, we planned for some easy hikes in Pohorje, and we hoped to see lots of wildflowers. Since it’s an ideal season to visit waterfalls, we checked whether we could find any – the answer is yes! 🙂 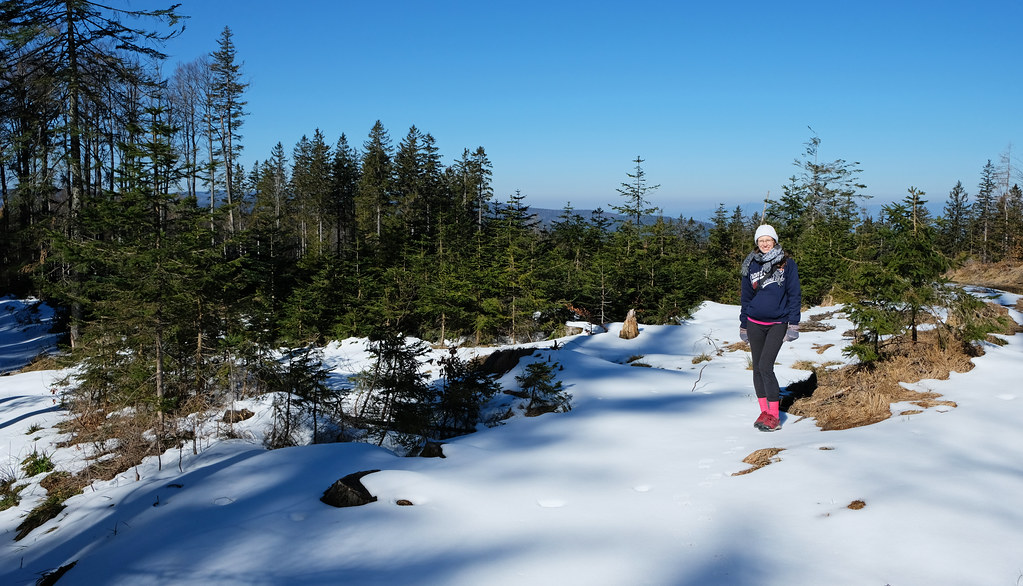 We ended up visiting two waterfalls. One of them, Skalca waterfall (Slap Skalca in Slovene) was a short hike from a pullout as we drove from Maribor to the Areh skiing resort. We didn’t find this waterfall on any of the online maps we use (Google Maps, MAPS.ME, Mapy.cz), we only saw a sign indicating it as we were driving towards the trailhead at Areh. Anyway, slap is a useful word to know when hiking in Slovenia, it means waterfall.

The hike itself was very short through the forest. A series of wooden stairs led us down to the bottom of 16 metres high Skalca waterfall. 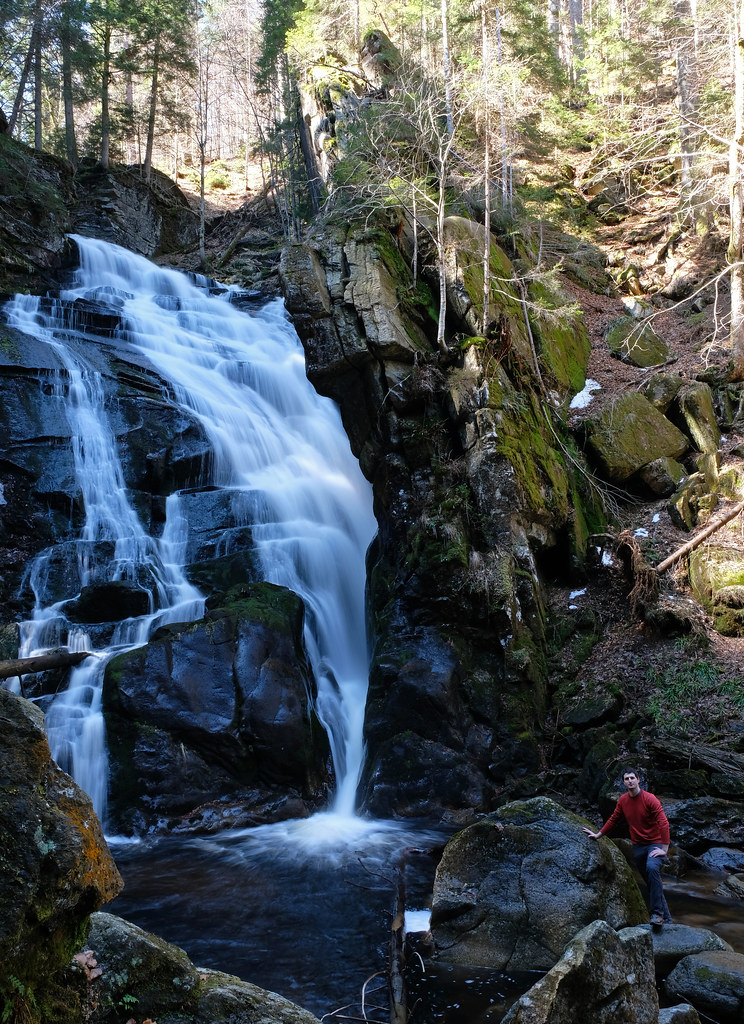 The second waterfall was the more impressive one, and the path there was also longer and more challenging. It started as a nice walk in the forest from the Areh skiing resort. We could still see some snow there in March, and that also meant countless early spring wildflowers, mostly snowdrops and crocuses.

The last section of the trail took us down into the valley of Lobnica stream. This was the most scenic and most challenging part. The path is very steep and could be dangerous, especially if it’s muddy or icy, even though some chains helped us on the way. 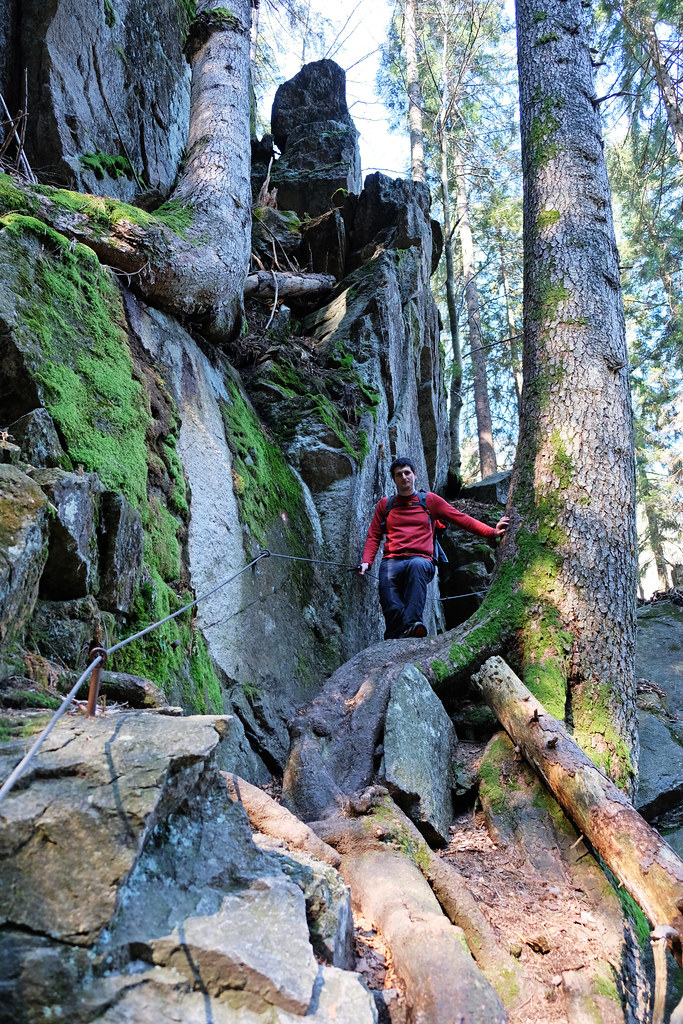 But Veliki Šumik waterfall was worth all the effort. It’s the mightiest waterfall on Lobnica stream, and it had a lot of water in it as the snow was melting. We could hike all the way to the bottom, but views are also great from above.

If you continue the path, it takes you to Mali Šumik waterfall. We felt sorry that we didn’t go further, but the path was still icy and very slippery, we chose not to take the risk. 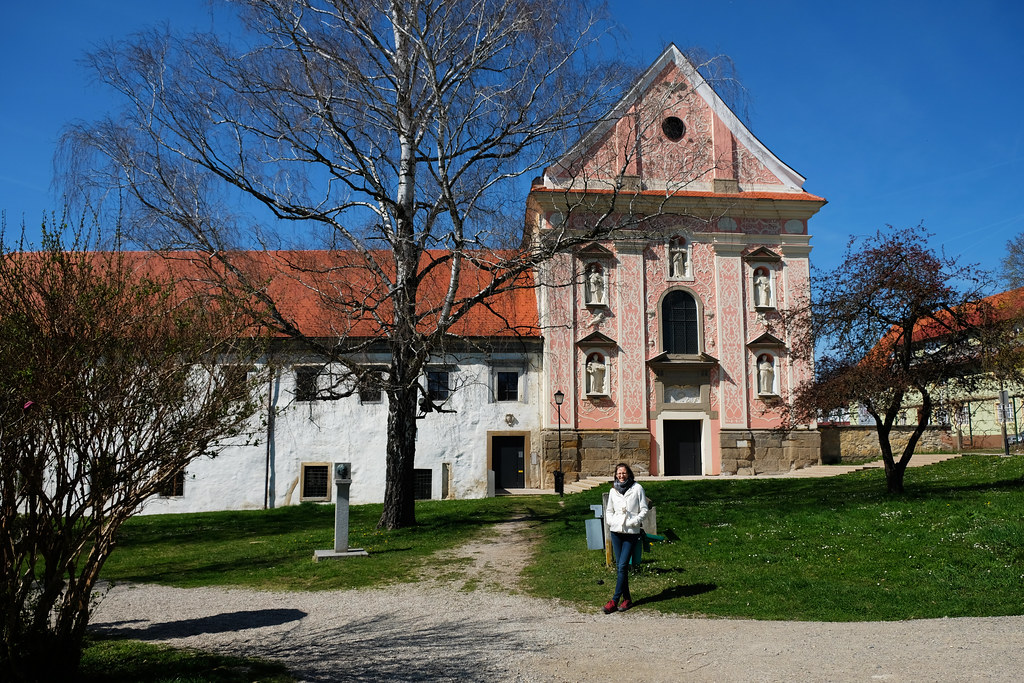 The straightforward place to stay is Maribor where there are plenty of choice. We chose a private apartment, Guest House Carmen. We really like these family owned places, they make us feel like we are at home, and this one was no exception. Our hosts were friendly, spoke good English and even provided some basic food for breakfast. It’s a bit further from the city center, but that means like 10 minutes by car. In exchange, parking was no problem, and since we arrived by car, it was convenient for us.

If parking is not a question for you, you can surely find tons of places walking distance from Maribor’s city center. Or you can choose to stay in the lovely towns of Ptuj or Celje.

Have you ever been to Slovenia? Any favorite cities or towns there?