We’ve been dreaming of visiting the castles of Loire Valley since we started planning our honeymoon – 4 years ago. Though we spent our honeymoon on the island of Corfu in the end, Loire Valley was in the back of our minds since then. It took a while, but finally we got there this May as part of our 10 days trip to France. The main goal of this trip was actually to visit the Loire Valley. And Paris, by the way, if we travel to France anyway. 🙂

Want castles? Here’s 50 of them! Your welcome.

We love castles. Their atmosphere, their stories and scandals, their amazing colorful gardens, their elegant interior and furniture, all their delicate decorative elements… everything. A region with almost 50 castles (they call them châteaux) is kind of tempting to us! Well, that is Loire Valley, in a nutshell. Maybe you can add some lovely small towns and vineyards. 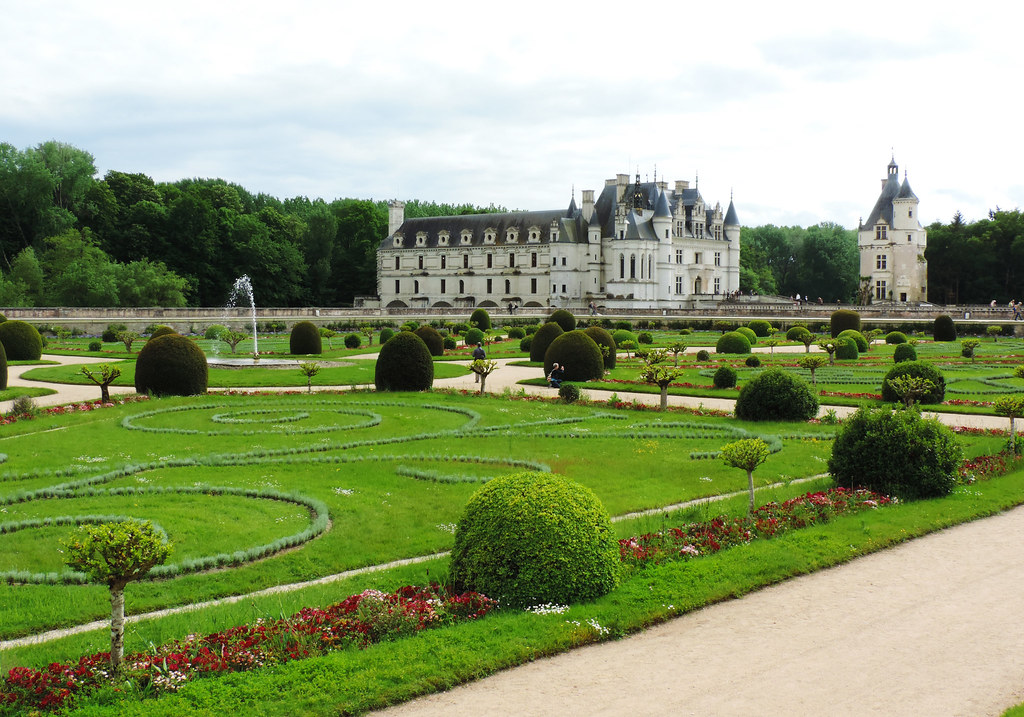 The first very serious problem we faced is which castles to visit. Sure, we didn’t have time for all and we didn’t want to get sick of them either. We spent 6 days in the Loire Valley and visited 7 castles. We chose them based on reviews and pictures, and we had a surprise, too. Because life always has surprises. So let me take you through our castle tour.

Is it your perfect list? I don’t know. Have we missed anything very spectacular? I don’t know. If I would, we would have visited it. 😛 But this 6 days as a whole with all the different castles was a unique and wonderful experience for us. It was a dream fulfilled perfectly. Apart from some heavy rainstorms. 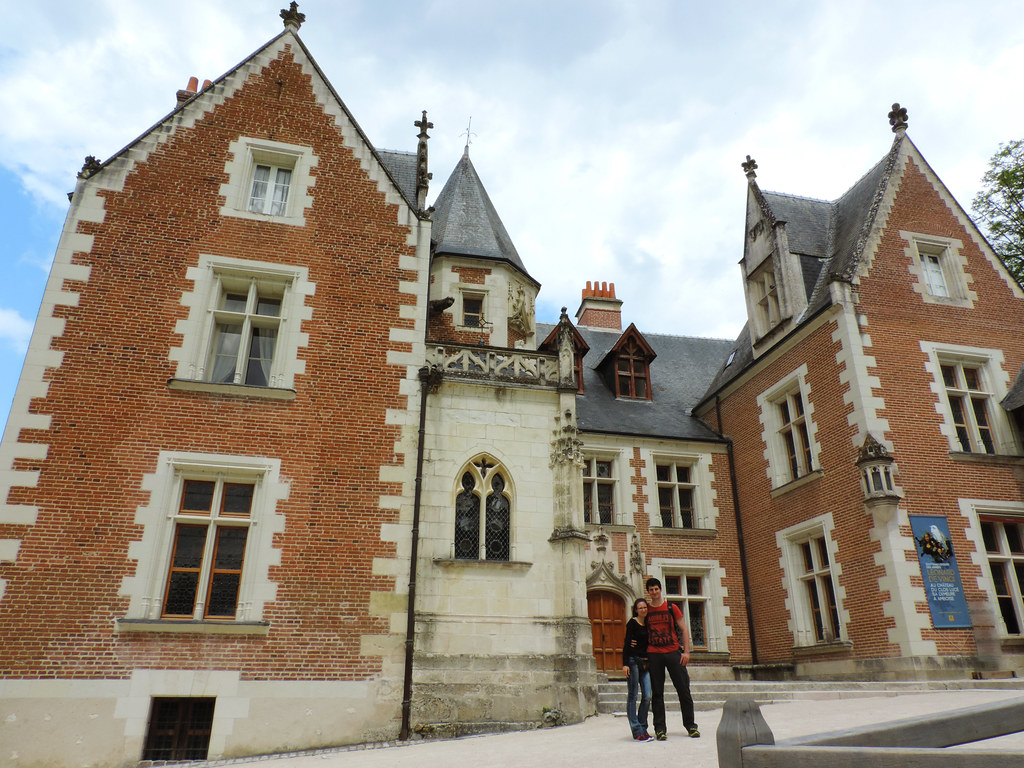 First of all, castles don’t look like as you might imagine them. But it’s not their fault, believe me. Can we blame Disney? Maybe. Because we tend to imagine castles like the ones from the Disney movies. Real castles are not like that (only very few of them, to be precise). They are much more diverse!

Château du Clos Lucé is definitely not the Disney kind, but it’s an elegant mansion built of pink bricks. Its most famous resident was Leonardo Da Vinci who was invited there by the king, and spent his last 3 years in Clos Lucé – painting, dreaming and thinking. Beyond his bedroom and some elegant salons, we could see what he was working on in his last years. 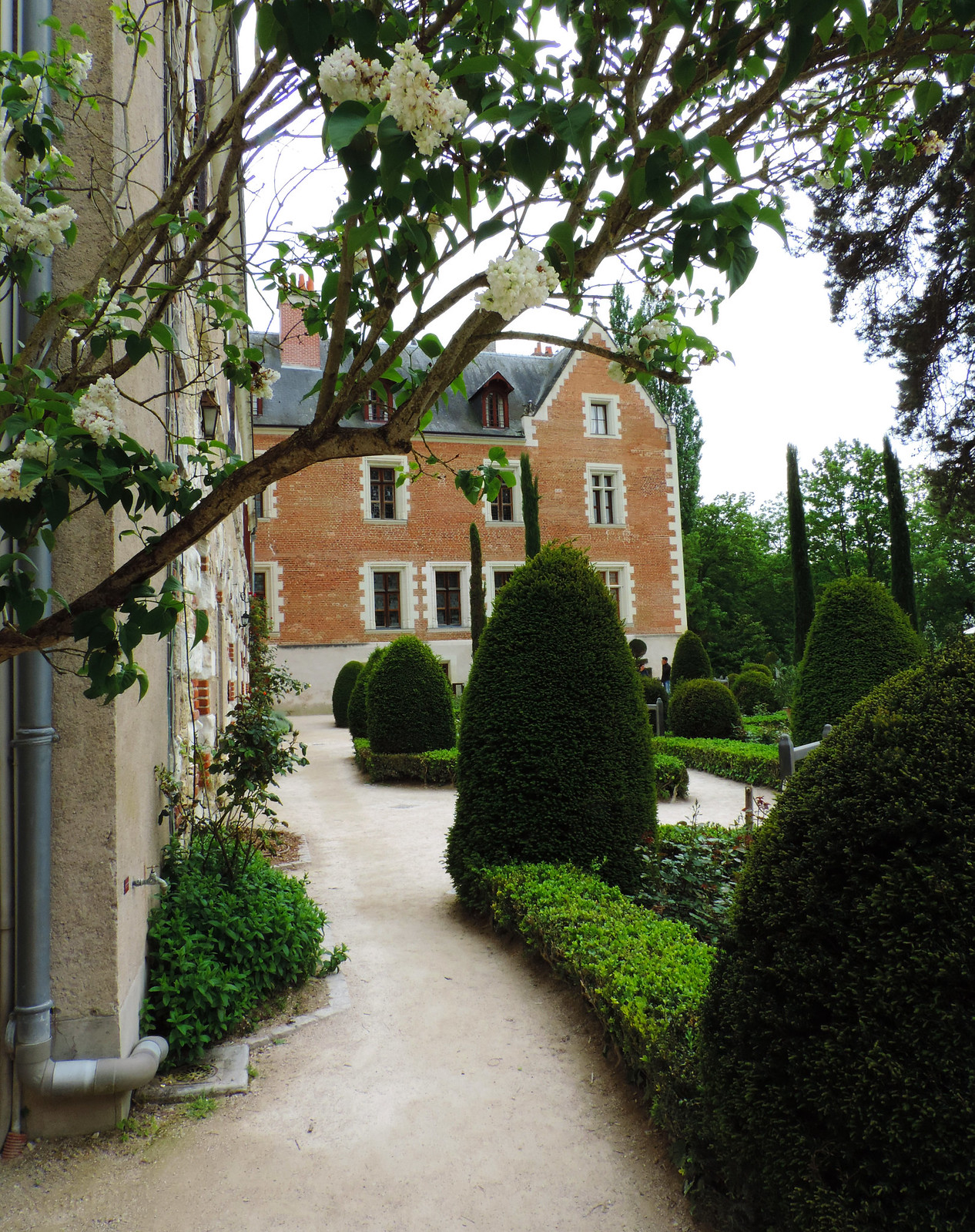 A lot of his inventions which were only plans in his life have actually been built since then. There’s a cool room in the basement where animations demonstrate how these inventions work. It’s just unbelievable what a genius he was. Some of his inventions can be found in the garden of the château, and we could even try them out! Okay, they’re mainly for children. But it wouldn’t be fair to miss out the forever children, right? 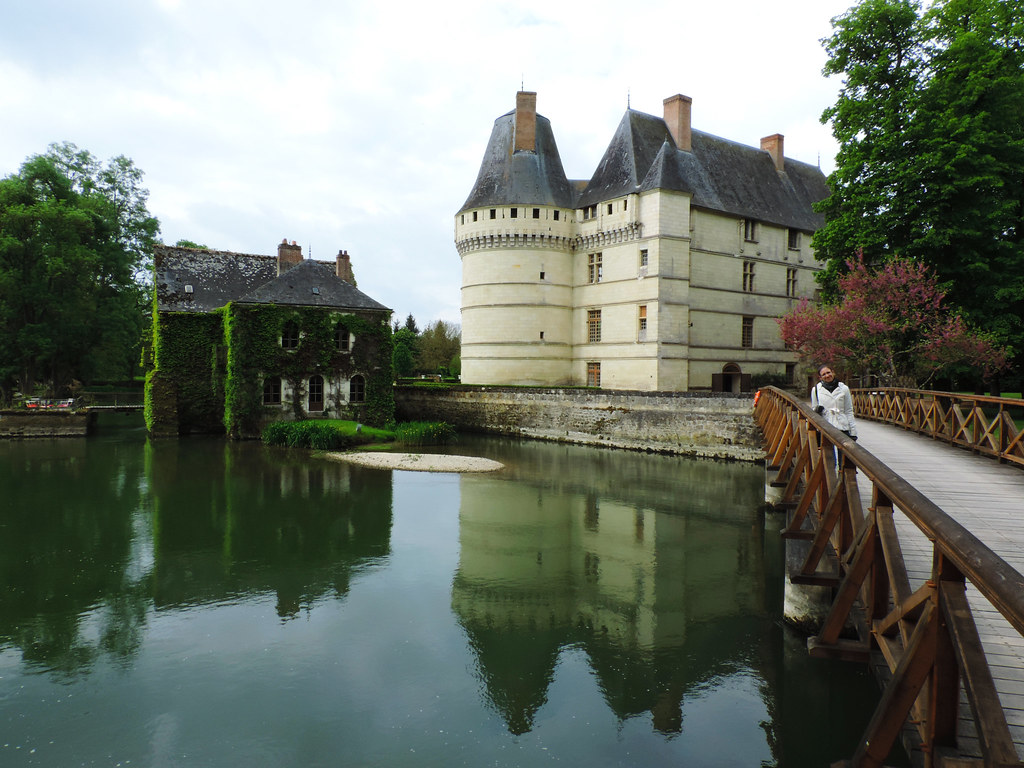 Château de l’Islette was the one we haven’t actually planned to visit. The more popular Château d’Azay-le-Rideau was the one on our list, but as we arrived and saw that its whole front facade is covered due to renovation works, we decided to change our agenda.

Sometimes it’s good that I’m a planner, because we had plan B, of course. It’s also good that Csaba was there to tell me that not visiting Azay-le-Rideau is maybe not the end of the world. Maybe this other one is nice, too. It also has a name that we are not able to pronounce after all. So we bought our tickets for Château de l’Islette. 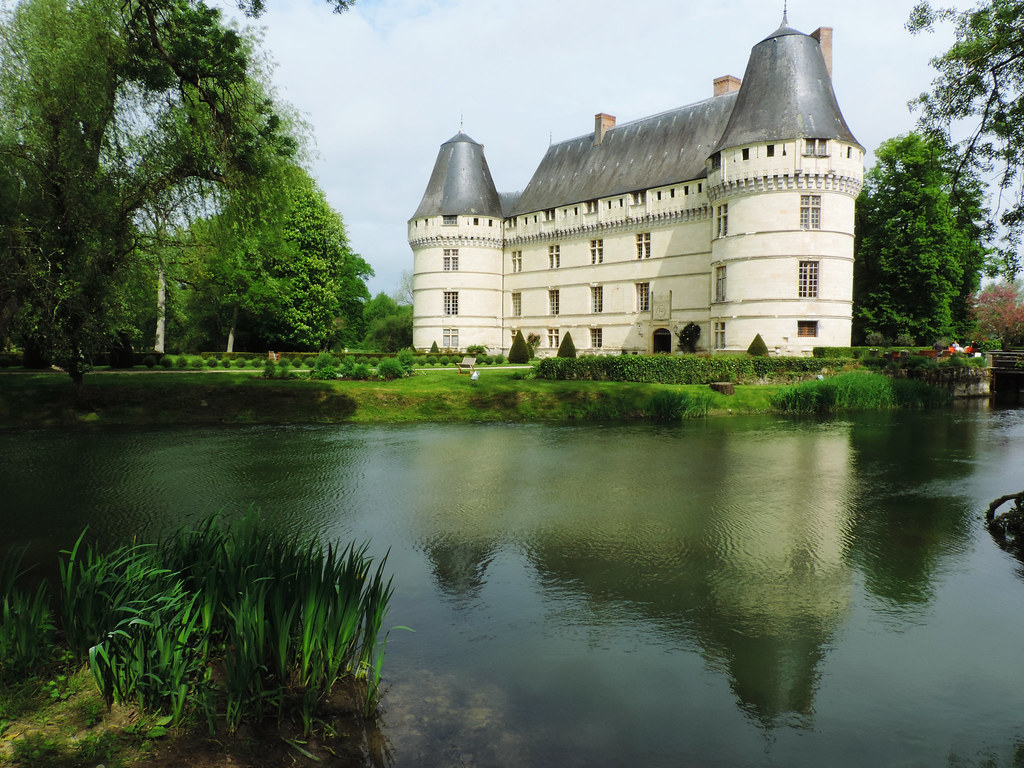 By the time I’ve first seen this charming little castle reflected in the river, I had completely forgotten about Azay-le-Rideau (sorry, dear). But when I say little, I mean according to being a castle.

Another interesting fact is that it’s not only a private property even today, but the family lives there, too. They move out each year from May to September to allow visitors to see the rooms. That is the reason that its atmosphere is a mixture of old and modern, elegant and simple. And we walked in the rooms alone most of the time – a much appreciated bonus of a not so well-known château. 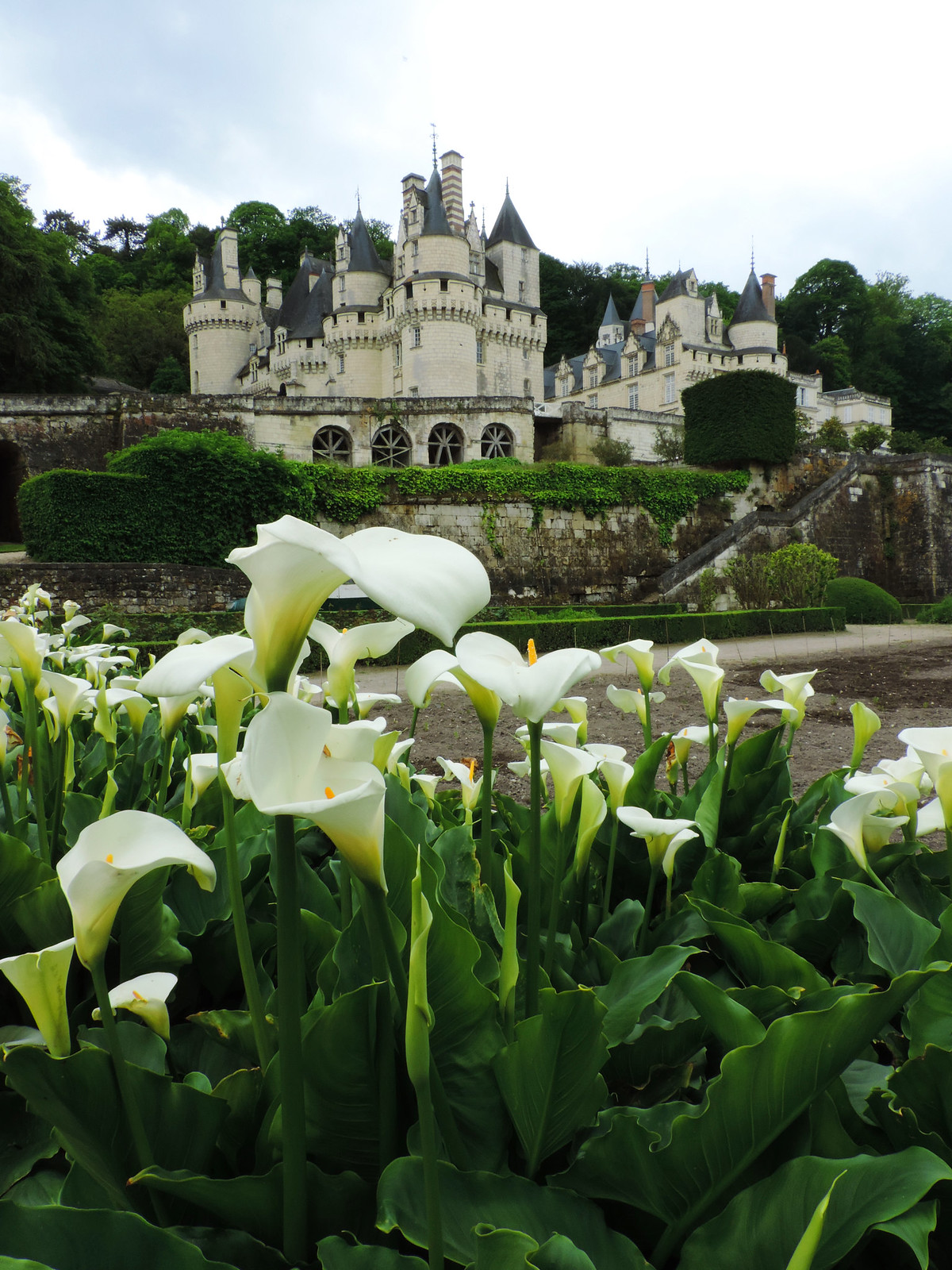 Want a fairy tale castle? Here you are! Ussé is said to inspire one of the most famous ones: tale of The Sleeping Beauty. We didn’t find it hard to believe as this château has quite a mystic atmosphere. Only some of the rooms are furnished, but we got lost easily in all the different towers with their spiral staircases and the passages between them.

The gardens and the small chapel are charming, too. Not to mention the majestic building of Château d’Ussé overlooking Indre river. 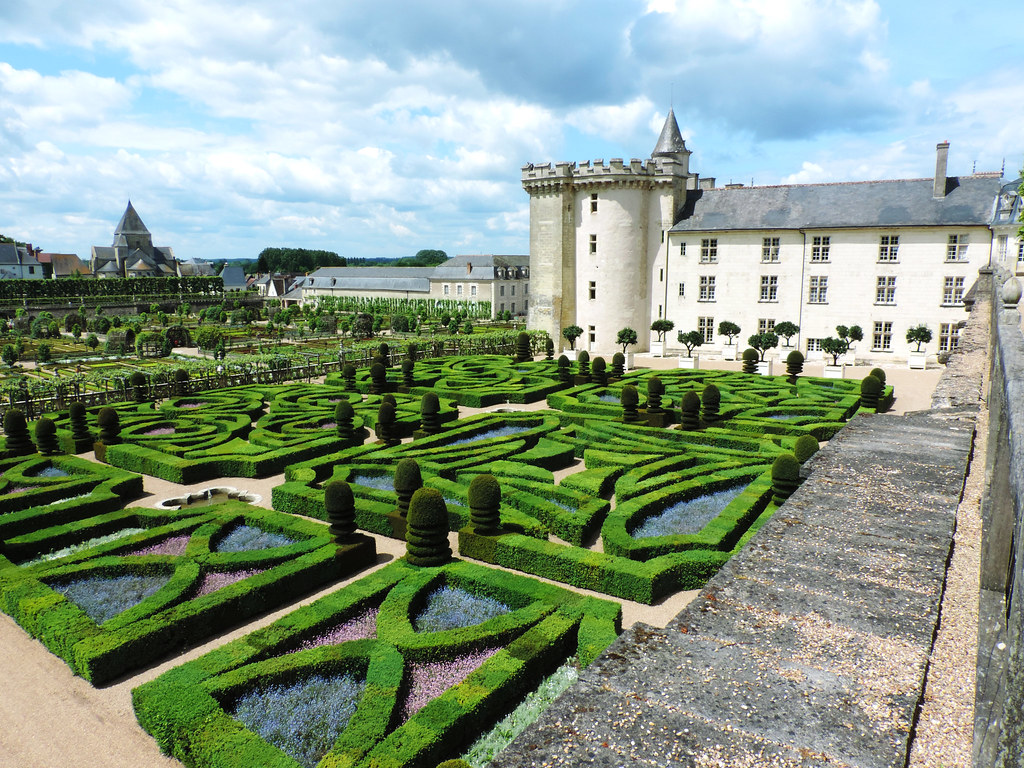 The building of Château de Villandry is elegant, but not one of the most spectacular ones – from the outside. Maybe that’s why it surprised us how nicely all of the rooms are furnished. Not to mention the view from the rooms and from the tower: the view of the gardens!

Because the main reason we wanted to visit Villandry is its famous gardens. And they didn’t disappoint. The 6 different gardens and the small maze are candy for the eyes and lovely places for romantic walks and talks. We haven’t expected a vegetable garden to be so colorful and beautiful either: 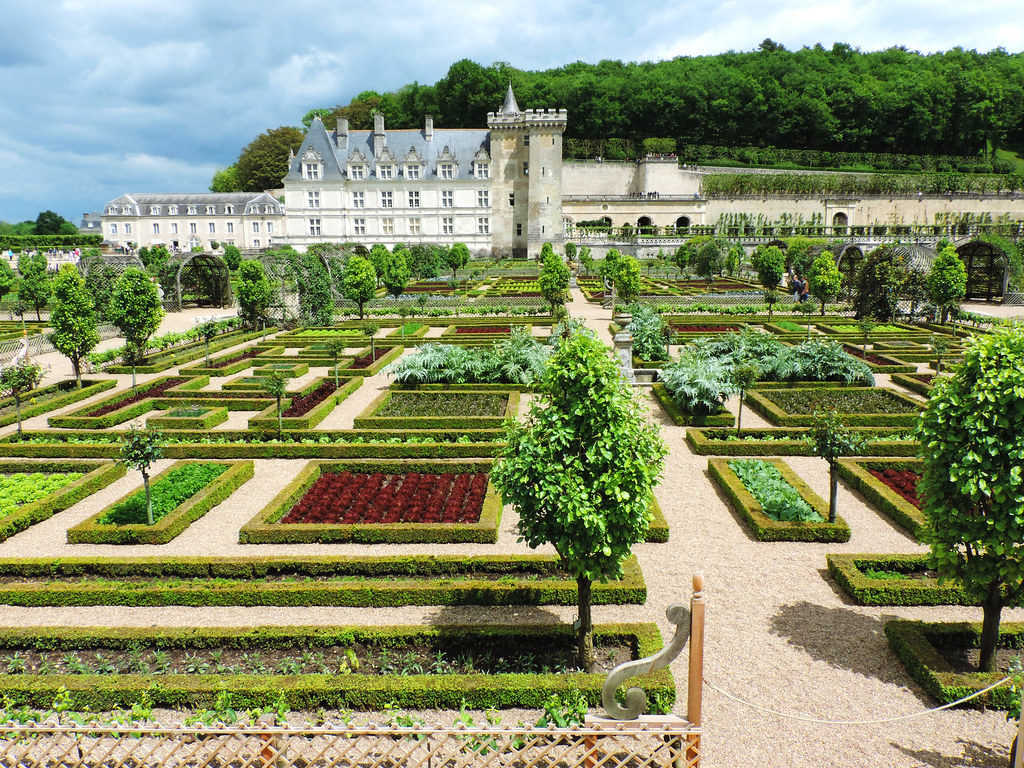 The careful planning of the ornamental garden’s love symbols amazed us: hearts for the tender love, broken hearts for the passionate love, fans and love letters for the flighty love, and blades of daggers and swords for the tragic love. You are not allowed to walk in this garden, but the real fun is seeing it from above anyway.

The sun garden with all the bright yellow and orange colors is a small jewel itself. 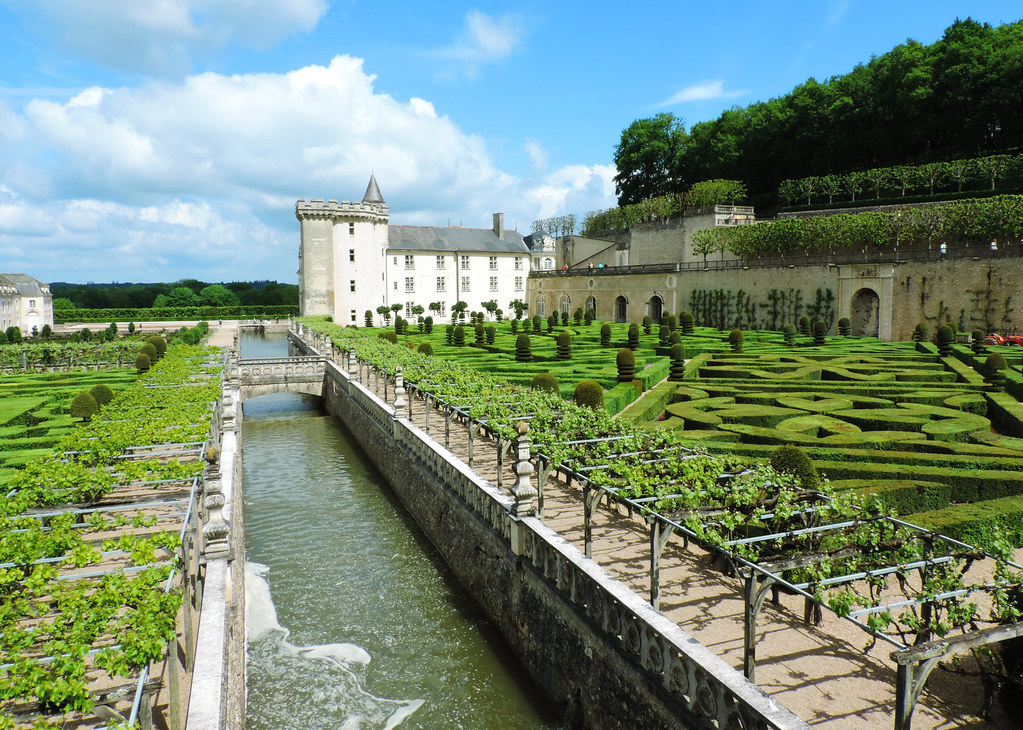 These are just our favorites, but there’s also a peaceful water garden with nice castle view, herb garden overlooking the symmetrical shapes of the vegetable garden, and some quiet trails up to the woods. It’s definitely worth taking your time to admire the variety and beauty of all the gardens!

It’s always hard to choose favorites, but probably Château de Chenonceau is our favorite of the Loire Valley châteaux. This elegant building is actually on the River Cher – part of it was only a bridge originally, but it was added to the château later.

It’s often called the ladies’ château because mostly women owned it and shaped its history. A history with scandals. It was the gift of Henry II to his mistress, Diane de Poitiers. Then Catherine de’ Medici, the widow of Henry II took it away from Diane. Later Louise Dupin made it a literary salon that attracted leaders of the Enlightenment. 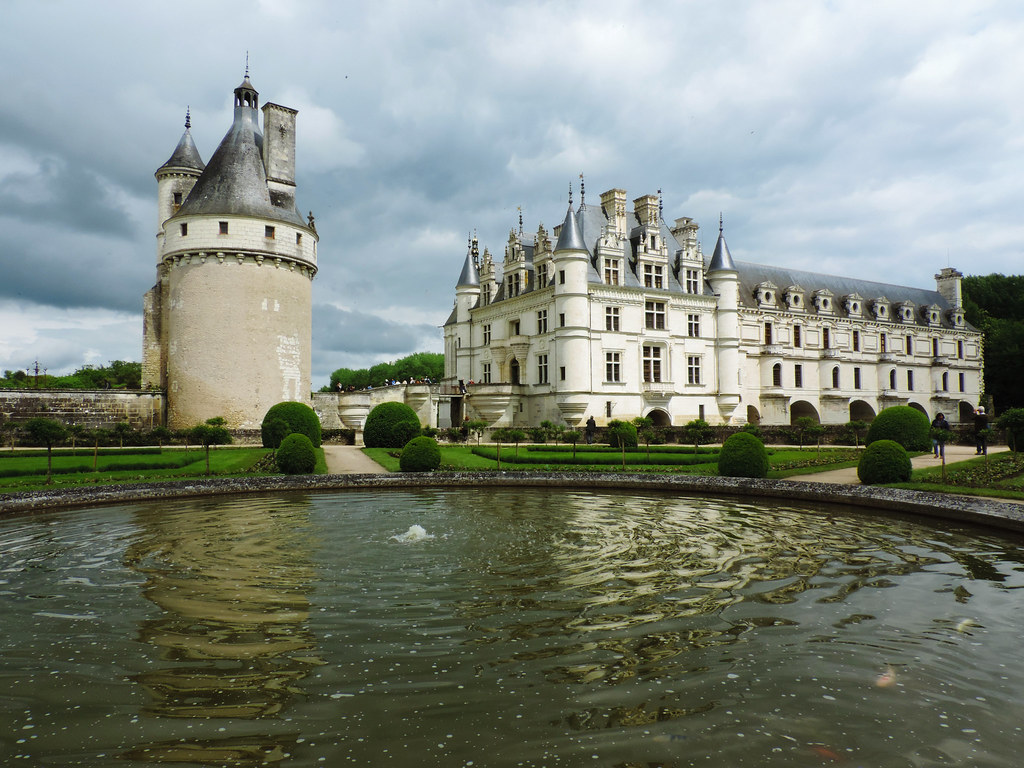 It has nicely furnished rooms and two lovely formal gardens. Walking along River Cher with the castle views was also a highlight. Actually, we even drove to the other side of Cher, parked next to the small bridge and walked there, too, just to see Chenonceau from every angle. 🙂 (The other side of the river is not part of the château’s territory, you are free to park and walk there any time.) 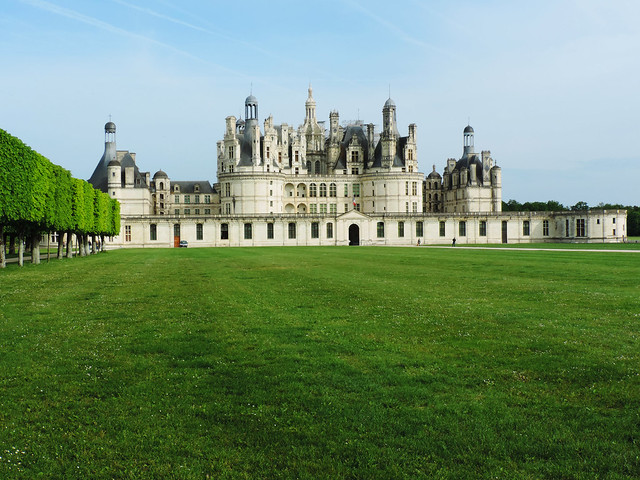 I wonder if Chambord is the most photographed castle in France and even if it is, it’s quite fair. This giant castle – the biggest one in the Loire Valley – would already impress with its size, but it’s also a magnificent work of art. I mean, can you imagine 77 staircases and 400+ rooms?

In spite of its incredible size Chambord is a very elegant building. Its famous double spiral staircase in the center of the building is the most unique staircase we’ve ever seen. Walking on the terraces and on the roof gave us unique views of the building and close views of its delicately decorated towers. Don’t expect much original furniture though, because it has actually never been furnished. Because it was barely used. Like ever. Oh, okay, except attracting thousands of visitors to the Loire Valley each year.

You can read more and see more pictures about Chambord in this post. 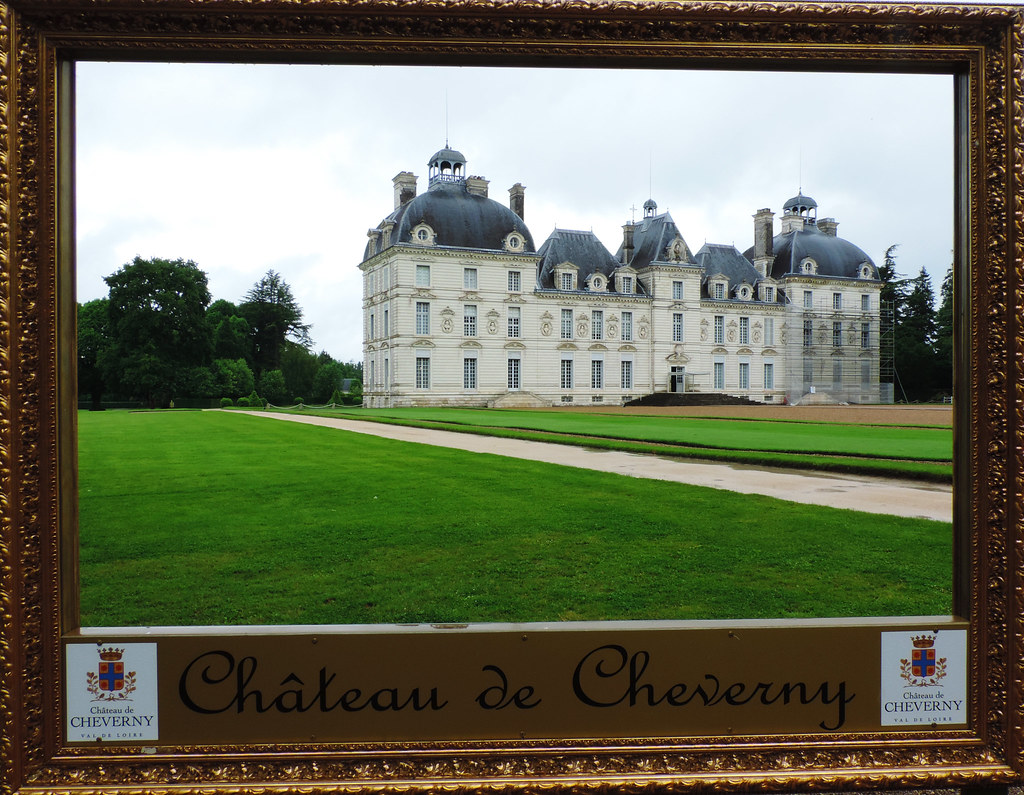 Château de Cheverny was the last one we visited on this trip, and we haven’t expected it to be such a special goodbye to Loire Valley. It was. It’s probably one of the simplest from the outside, but it’s the most beautifully furnished of all the châteaux we’ve seen there. Though only half of it can be visited by tourists, because the other half is still used by the family who owns it. But even the half of it was more than enough to impress.

It has a small, but very nice ornamental garden and a huge park with a lake. Csaba has saved the life of a baby swan there. Because castles are the places where you meet heroes who save princesses, right? Or cute swanlings. 😀

Driving around in Loire Valley 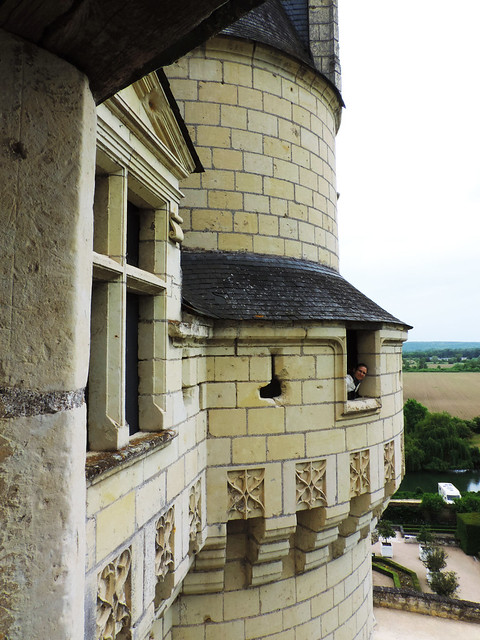 Lots of day trips are organized from Paris to the Loire Valley, and they could be a good opportunity if you only have a day. However, they were not an option for us. There’s no way we would leave this enchanted place after a single day.

So we rented a car in Paris, and headed to Loire Valley by ourselves. We like road trips, anyway – the flexibility of having a car and stop whenever we want. Get lost on narrow country roads – in a romantic way, but sometimes literally, too… And the roads of Loire Valley gave us plenty of excuses to stop: castles, small towns and all the French countryside charm. 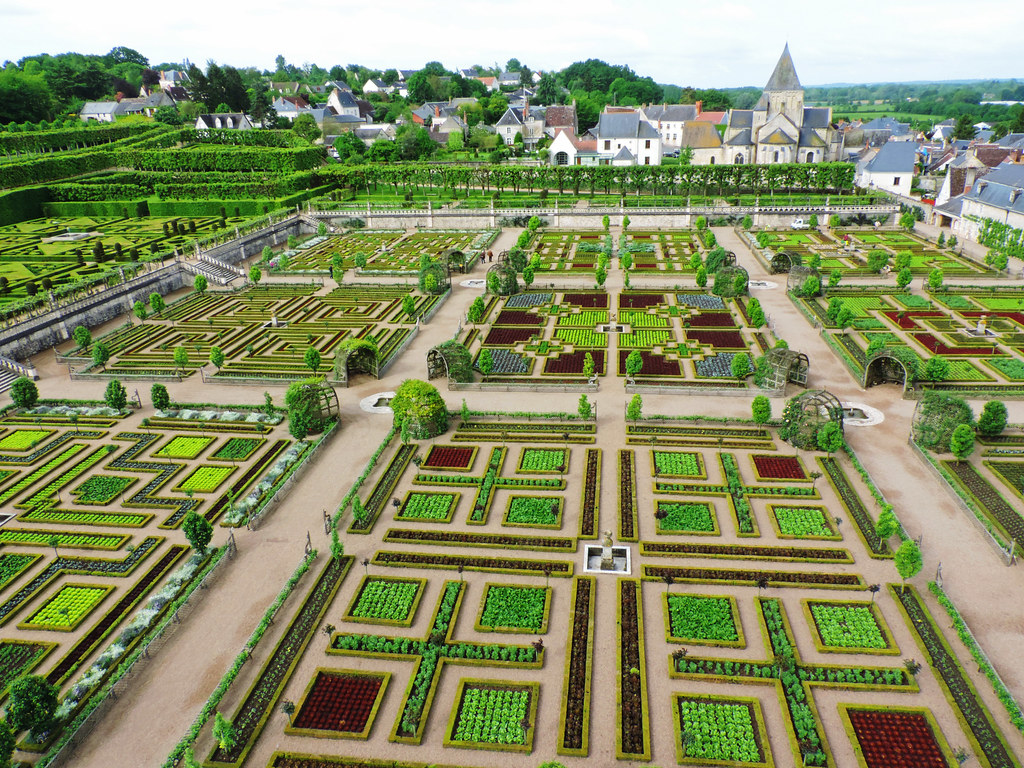 There’s motorway all the way from Paris to the Loire Valley. It’s a toll road, and you pay when you leave the motorway. We used our debit card, but you can find more info about the payment methods and fees here.

Once we were in the Loire Valley, we left the motorway, because it was cheaper and more scenic to drive on the country roads. Also, we haven’t covered long distances.

Are you ready to book your trip? Looking for car rental deals? Check them out here!

We found that Tours and Blois are perfect bases to stay while exploring the Loire Valley. Also, they are lovely cities to walk around. We especially enjoyed staying in First Inn Hotel Blois – a new hotel with tiny, but practical and nice rooms. The receptionist was also very friendly and spoke fluent English. 😀

Have you been to the Loire Valley? Which castles would you visit? 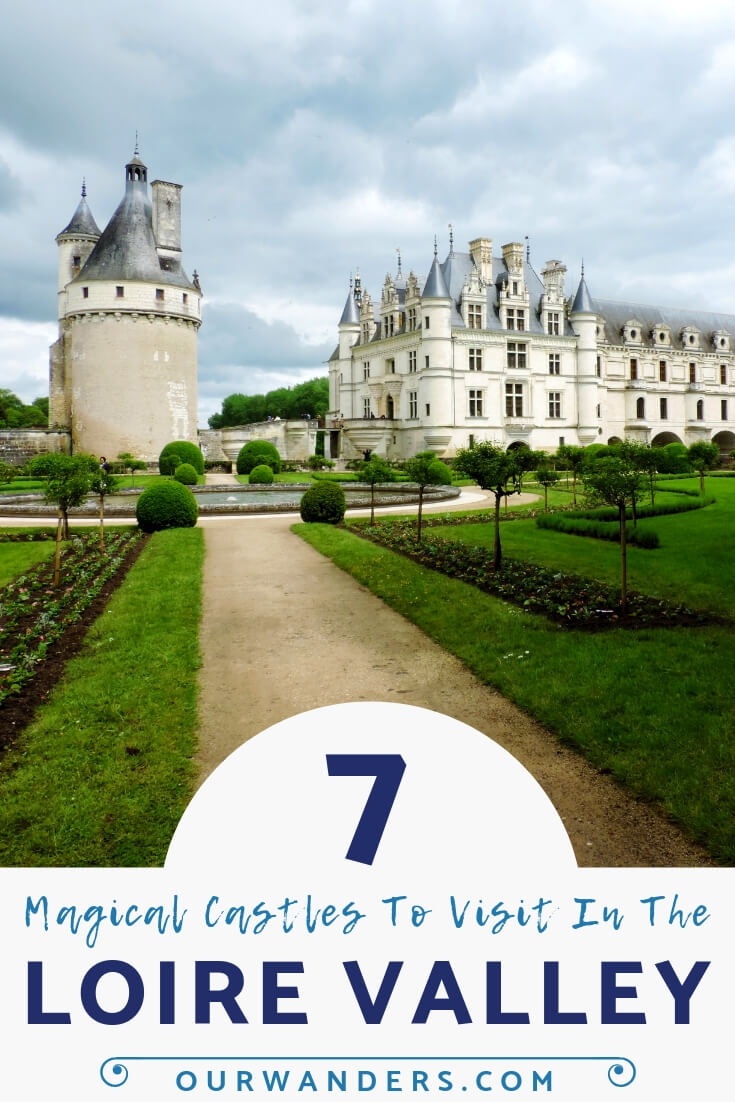 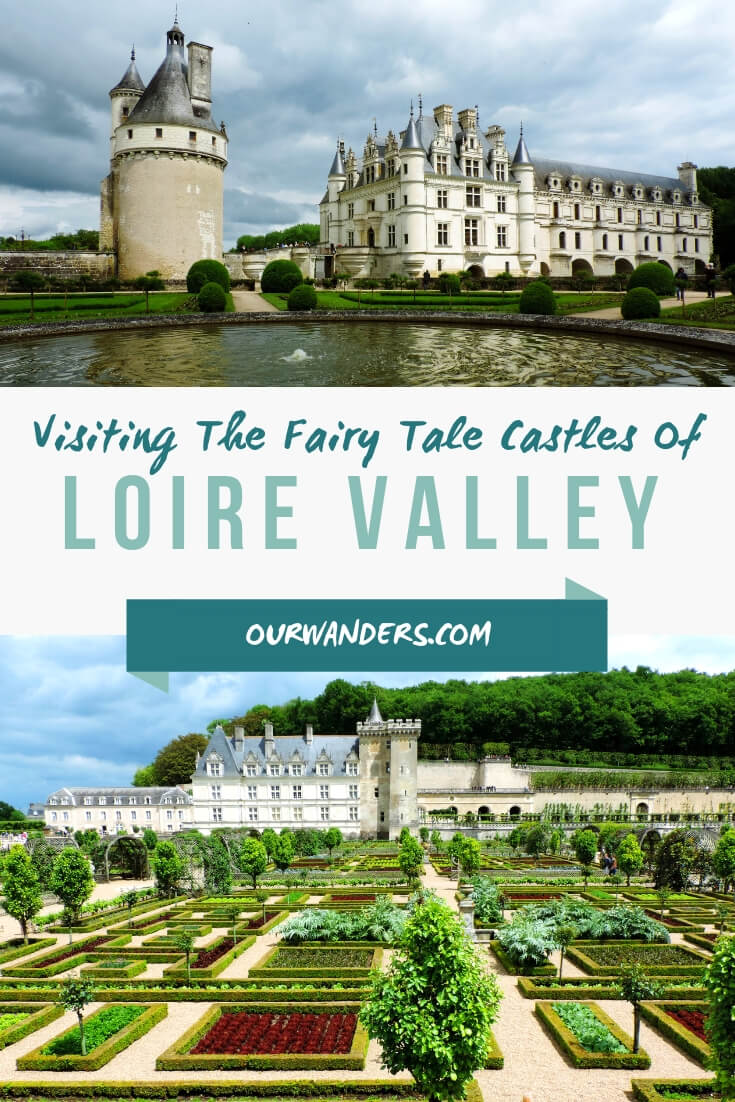