We’ve visited Paris for the first time this May and our most memorable day there was probably the one spent in the Palace of Versailles – or Château de Versailles in French. A whole day, you ask? Well, yes. It was not just because of our love for castles, but also because of the size of Versailles… and the other 3 smaller palaces built on the property – just because kings and queens want a lovely getaway from gorgeous and busy Versailles sometimes. It’s understandable, right? 😛

Why is Versailles so significant? 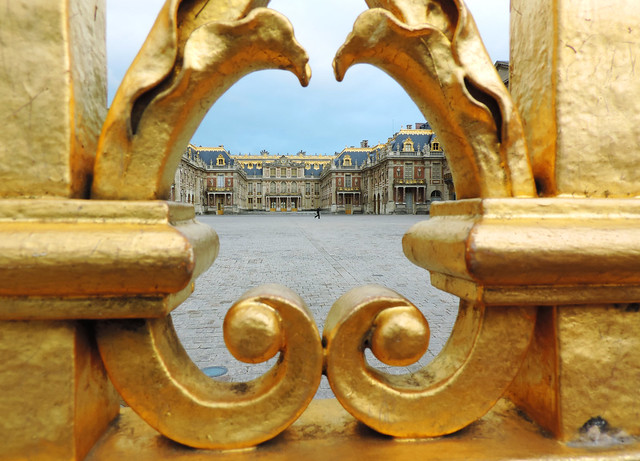 The royal palace of Versailles was the seat of the king of France from 1682 until about the beginning of the French Revolution. It’s not only a majestic building but also the symbol of the monarchy. It symbolized the power and wealth of the French kings and it has political and ceremonial functions even today. It’s also a museum and a UNESCO World Heritage site for 30 years.

How NOT to wait too long to get in

Château de Versailles is a popular tourist attraction. VERY popular. It deserves all the hype in our opinion, but you better plan in advance if you want to avoid waiting in line for too long to get in.

We arrived to the entrance of Versailles around 8:30 in the morning which is half an hour before the official opening time. And we did it right! We also bought our tickets online so we could stand in line directly at the entrance with hordes of other tourists waiting for the palace to open. We were quite satisfied with our decision to buy our tickets in advance because otherwise we would need to wait for the ticket office to open – and wait in line for buying our tickets, too… Yeah, there’s two lines: one at the ticket office, one at the entrance.

Arriving at 8:30 meant that the line at the entrance was not too long yet and it took us maybe 10 minutes to get in once the palace was open. Until then I took some nice shots of the palace from outside.

Tour of the palace 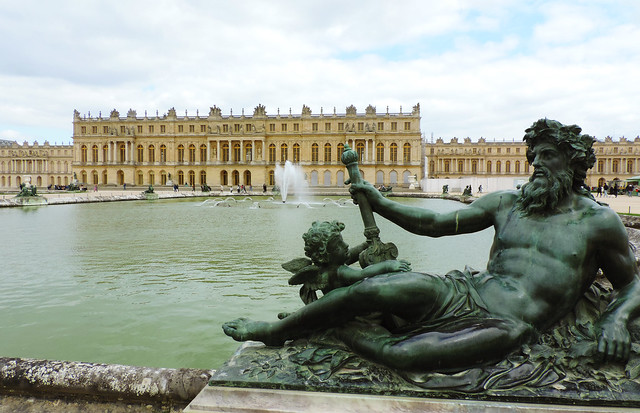 We started our visit with the tour of the palace: the Grand Apartments, the King’s Chamber, the Mesdames’ apartments and the very famous Hall Of Mirrors. Sadly the Queen’s State Apartment was closed due to renovation works.

Now let me tell you that you can maybe avoid waiting in line for too long, but I have no idea how to avoid the crowd inside. Because it was crazy crowded! We could barely move in some of the rooms. (No, don’t even dream about taking pictures without too many people – only pictures of the ceiling maybe… but ceiling decorations are amazing, by the way!). I don’t know if there is a limit on the number of visitors at a certain time in the palace, but our opinion is that it should be. For us the crowd definitely reached a threshold in some of the rooms that we could barely enjoy our visit. 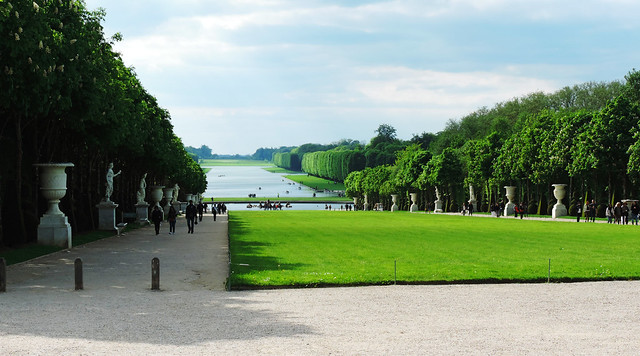 With that said, the interior of the palace is wonderful! The decorations (especially the ceiling decoration), the furniture, the architecture itself… and the Hall Of Mirrors. We had at least some luck with that one in terms of crowd. It was crowded, or course, but most of the people didn’t walk through the hall, only halfway until the exit which left us with plenty of room at the other end of this giant hall.

All in all, we still feel that it was well worth a visit, but we also can’t deny that we were happy to get out in the huge gardens and enjoy how much space we suddenly had.

Endless walks in the gardens 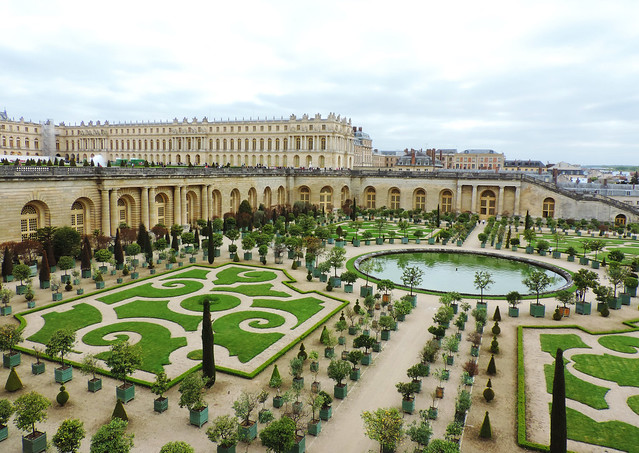 So the gardens. They are not just huge, but also beautiful – just as you would expect from such a gorgeous palace. I think we could have easily spent the whole day just in the gardens. And despite of the many visitors it can’t really get crowded – something what we truly appreciated after our palace tour. 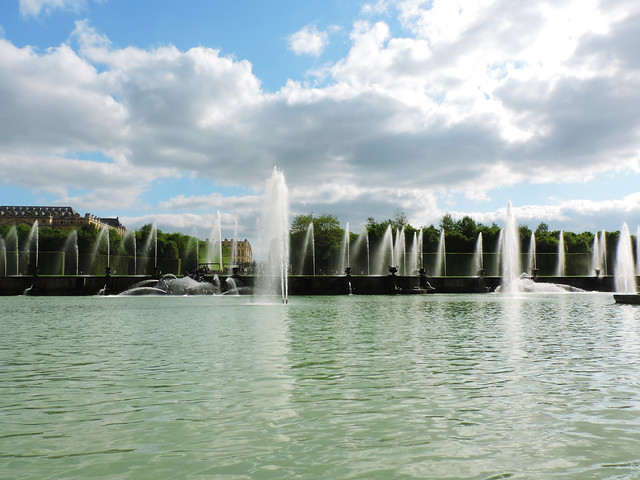 I don’t think we’ve ever seen so many fountains in any garden or park and a lot of them are architectural masterpieces themselves! They are even more spectacular in the summer season when they actually operate. It’s always hard to say that we love this or that the most, but these fountains shows were definitely among the best things we’ve seen in Versailles. 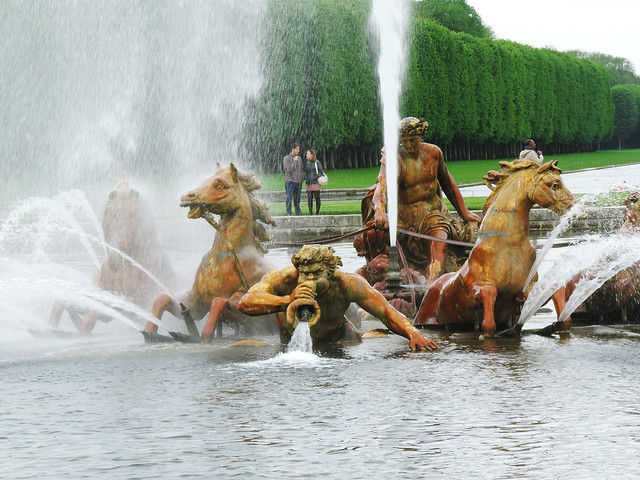 We’ve already missed the morning shows because we started our visit inside the palace so we kept track of our time not to miss the afternoon shows. They lasted only for an hour – all these beautiful fountains in every corner of the garden had the shows at the same time. They were spectacular and we wanted to see them all! So we ended up running from fountain to fountain in the giant garden. 😀

There was only one exception: Neptune Fountain. It’s the largest one and its musical fountain show started after all the other fountain shows ended. It was a breathtaking ending of our fountain hour! 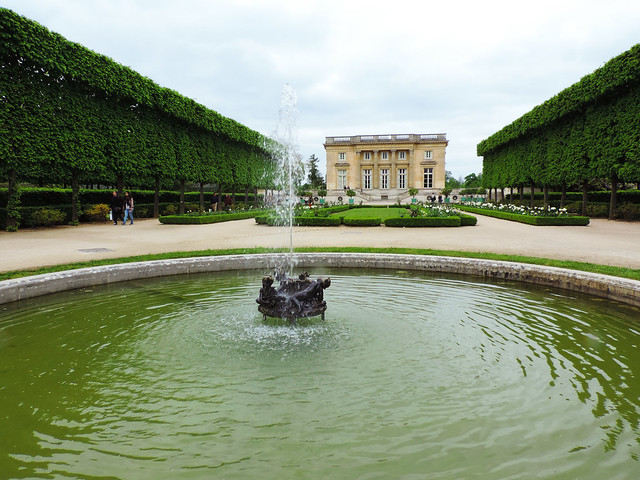 We bought a Versailles passport which gives access to all of the palaces and gardens on the domain. Well, if we visit it, we want to see everything. Good decision. But we only had a day and there’s so much to see that we really tried hard… I think we succeeded – I mean we didn’t see everything, but still we’ve seen a lot and we were not always in a rush… just sometimes. 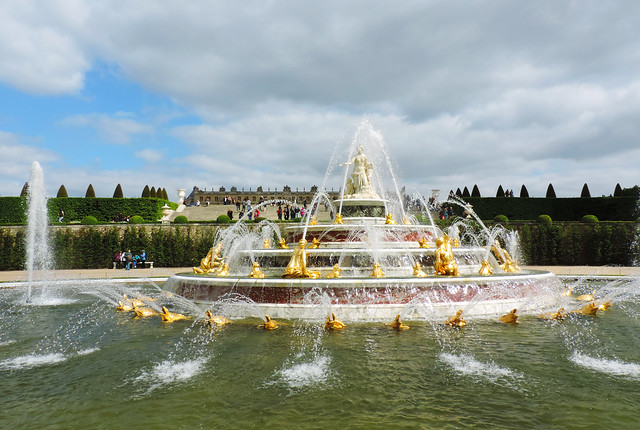 It was a long, wonderful day with so much beauty what is hard to embrace. With some stress in the crowd inside the palace. With some exciting scandalous stories. With beautiful fountain shows. With a peaceful walk in the garden in the late afternoon sunshine.

Useful things to know before your visit

Opening hours of the different castles and the garden is different and it depends on the season of your visit – check here for more info! 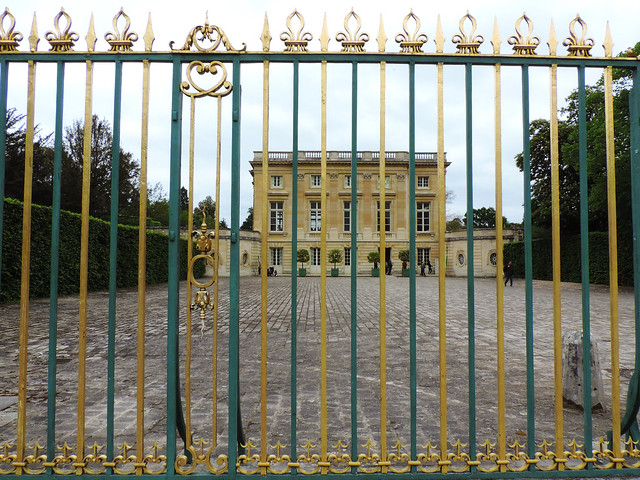 Believe us, you don’t want to stand in line twice: first at the ticket office and then at the entrance… Buy your ticket online! You can print it out and go directly to the individual entrance.

No food and drink is allowed in the palace, but you can deposit your backpack for free at the entrance. There’s dedicated picnic area in the garden.

Get a brochure about the garden at the entrance so that you know the exact times of fountain shows.

Finally: beware that Versailles is HUGE! A full day is a minimum what you need to enjoy it.

Do you like palaces? What is your most memorable visit to a royal palace?