Spending time in the high mountains means letting go. Letting go of your expectations and carefully crafted plans. Letting go of the feeling of being in control. Embracing whatever you get, whenever you get it. There’s no other way. You’re so tiny, so vulnerable in the wild.

You never know whether you get sun or rain, wind or fog (or our favorite, the summer hailstorm). Or how muddy and steep the trail actually is. Whether there’s wildlife around. You don’t know how you should be dressed up 2 hours later. Weather can change quickly and dramatically. You better have layered clothes and lots of water. 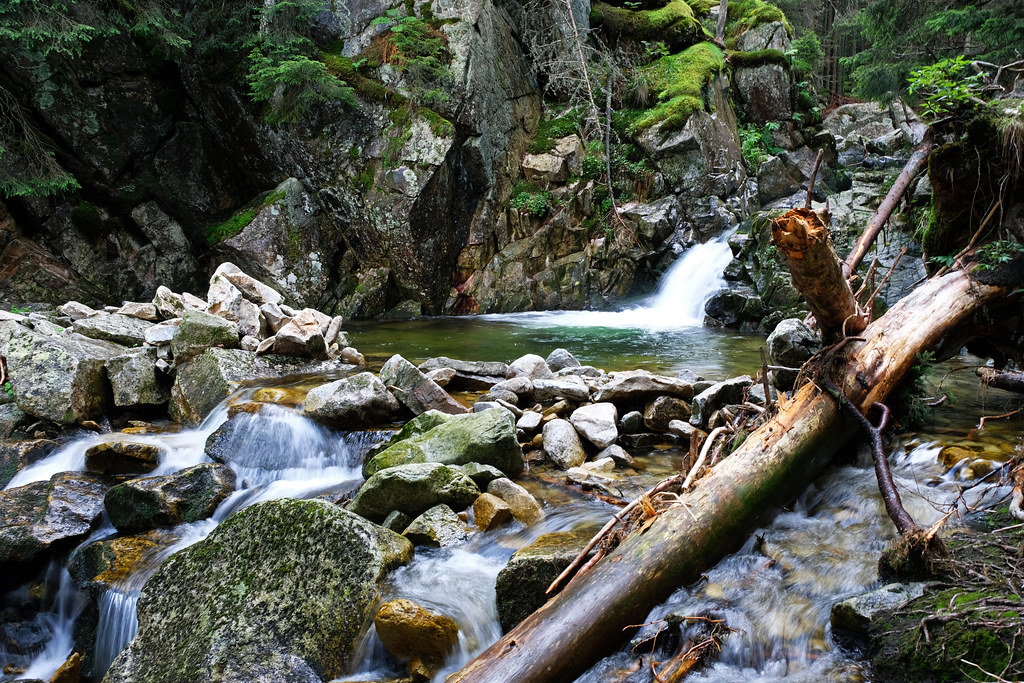 You need to learn how much your body is capable of. You need to learn when it’s time to turn back. And you need to change your plans according to all those factors you can’t completely foresee. The more remote and untouched place you choose, the more unexpected you can expect. 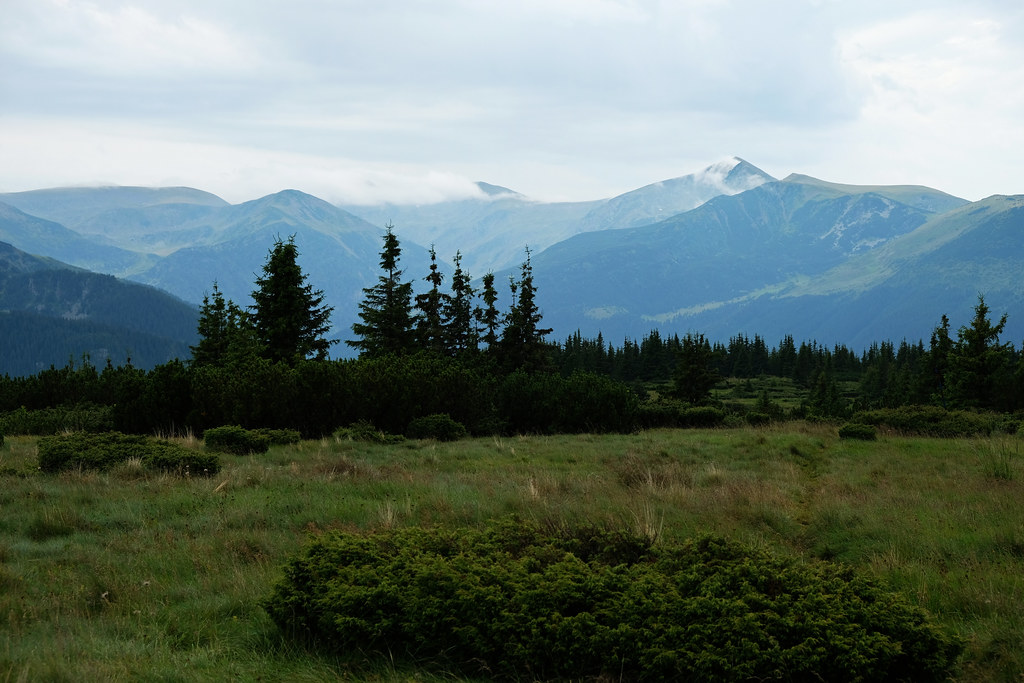 Transylvania’s Retezat Mountains are among the least developed areas in Romania. Or should I say they are among the best conserved wildernesses? Anyway, Retezat is still that wild, beautiful piece of nature that humans barely touched.

But it’s also challenging if you want to access it. There are very few roads, most of them are in quite bad condition, and adventurers need to prepare for long, demanding, multi-day hikes if they want to explore the beauties of Retezat. The climate is harsh. Retezat is rainy and unpredictable, even in the summer. 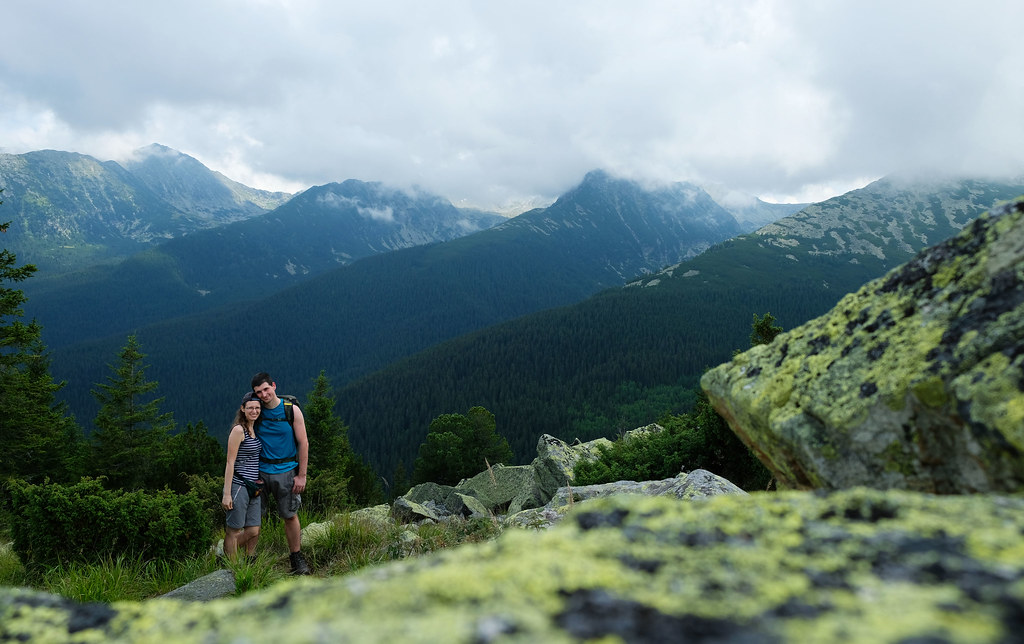 Retezat Mountains are part of the Southern Carpathians. Having more than 20 mountain peaks over 2000 meters, they’re among the highest massifs in Romania. Their highest peak is Peleaga with 2509 meters.

The area is a national park. Retezat National Park is actually the oldest one in Romania, established in 1935. Home to more than 80 glacial lakes, alpine and sub-alpine meadows and various wildlife species (chamois, wild boar, bear, wolf, fox and even lynx), Retezat is breathtaking. That and its remoteness tempted us so strongly. 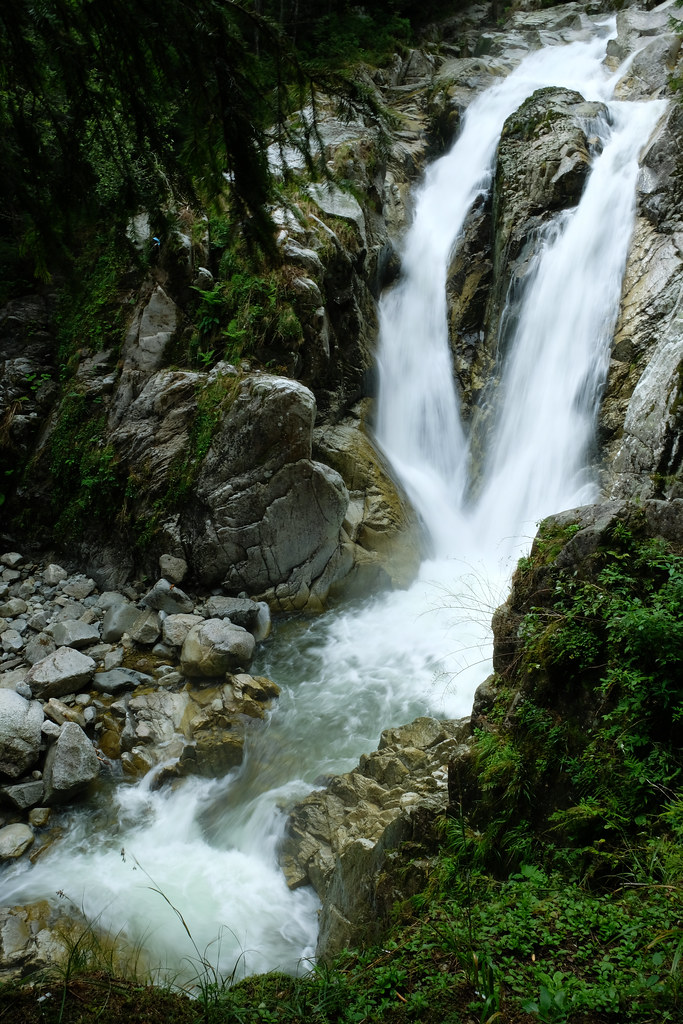 But we didn’t have endless time for Retezat. Still we wanted to include it in our first Transylvanian road trip. We planned to spend about 2 days there, so a pretty and easily accessible waterfall, Cascada Lolaia seemed like a perfect introduction. It was.

Only driving to the trailhead was challenging. Because the last few kilometres of the road towards the village of Cârnic is not paved, and it’s in a very bad condition (though the following day it turned out that this road was actually quite okay compared to others). We drove our own car, a Suzuki Swift that’s a typical city car, so we could tell it can be done. But we drove extremely slow and careful. 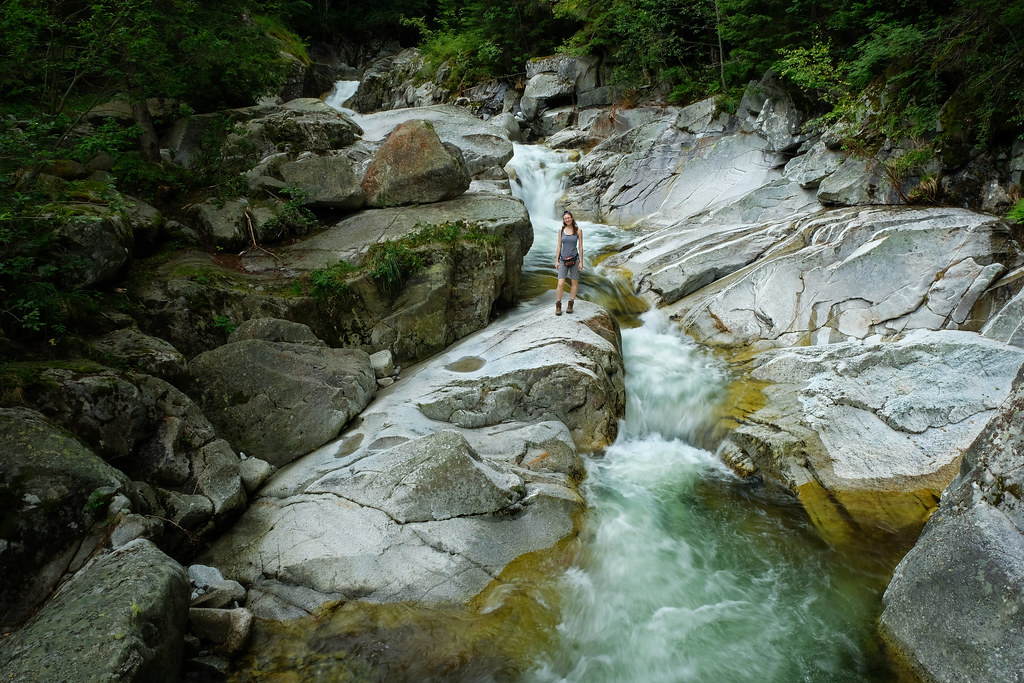 Things got easier as soon as we parked in Cârnic. (By the way, you can’t go further than Cârnic by car. Whatever Google Maps suggests. Yes, it does suggest you can.) It’s a pleasant 30 minutes walk in the forest to reach Cascada Lolaia: a 15 metres high, uniquely shaped, roaring waterfall. We couldn’t get very close to it, but there’s a viewing platform with excellent views, so there’s no need.

We walked a bit further up from the viewpoint and crossed a small bridge. It rewarded us with nice views of this wild mountain stream and some smaller cascades.

The path towards Retezat peak: valley of waterfalls 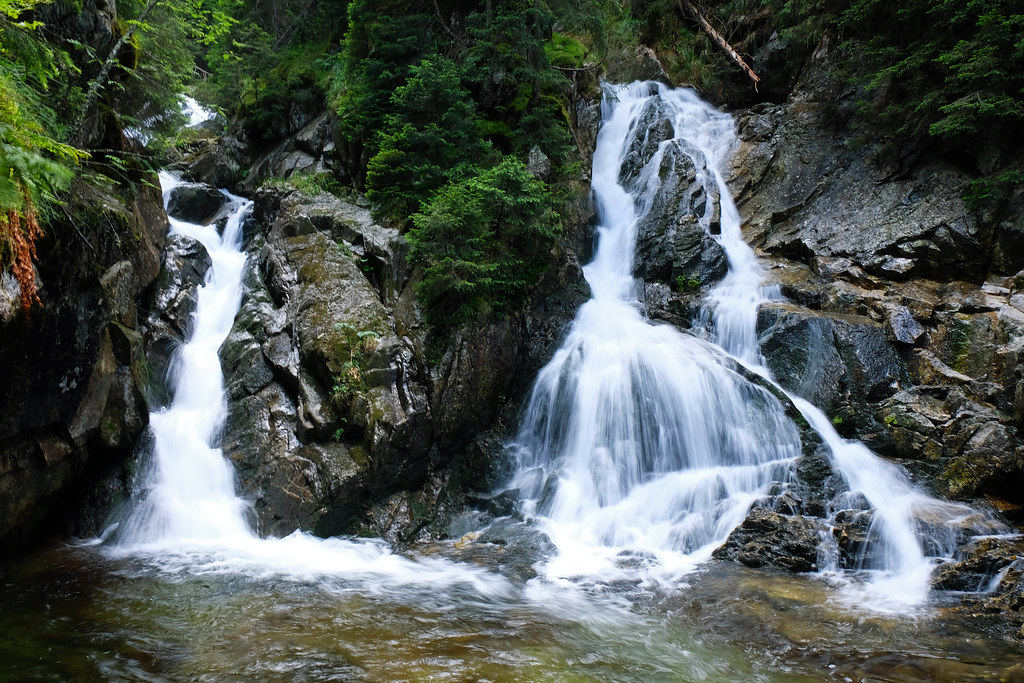 As the weather was nice, and we still had quite some time until sunset, we decided to hike further from Lolaia towards Pietrele mountain hut and Retezat peak. The challenging part of the hike started. Our reward was fabulous though. The trail runs in a lush green valley that’s full of amazing, hidden waterfalls. Some are similarly tall and pretty as Lolaia, but we couldn’t find their names on any of the maps we had.

As we reached the rocky saddle below Retezat peak, we had a short time to enjoy the views before everything disappeared in the dense fog. After some time, we decided to turn back. There’s no point getting to a peak when you can’t see anything. Instead we spent our time exploring more waterfalls in the valley on our way back. And that was time well spent. 🙂

The attempt to hike to Bucura Lake 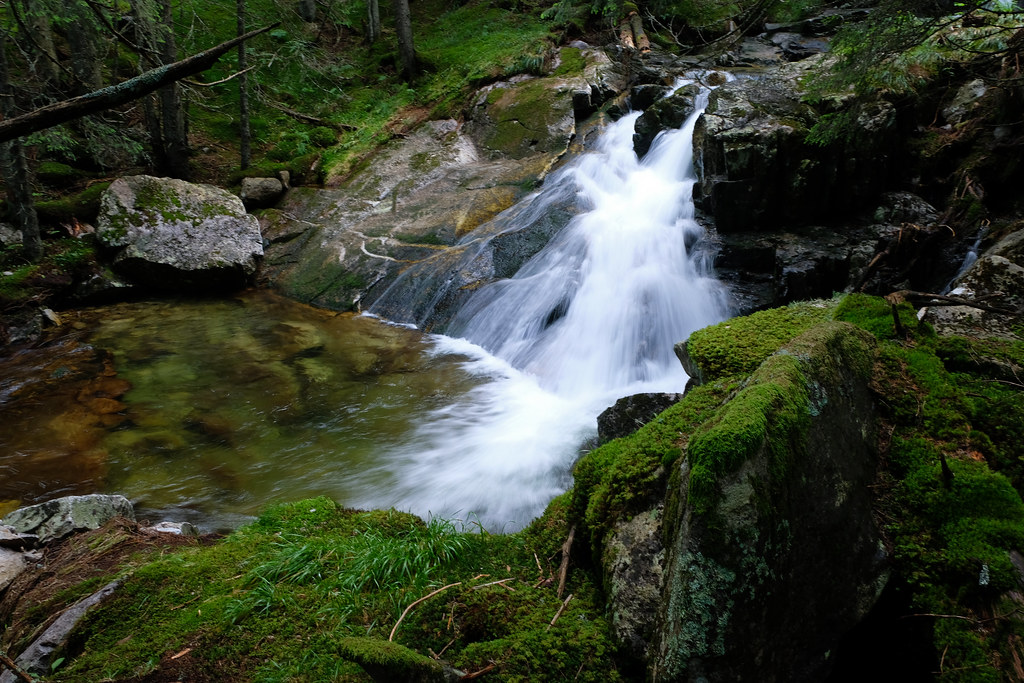 We planned a challenging full-day hike to Bucura Lake for the next day. Bucura Lake could be a great base to further explore the Retezat wilderness, but we thought it’d be impressive and tiring enough to just hike to the lake and then back on the same day. (If you plan a multi-day hike, you can camp at Bucura Lake.)

To do it as a day hike, we’d have had to drive to a camping named Poiana Pelegii. As you assume by now, we didn’t. Because we couldn’t. 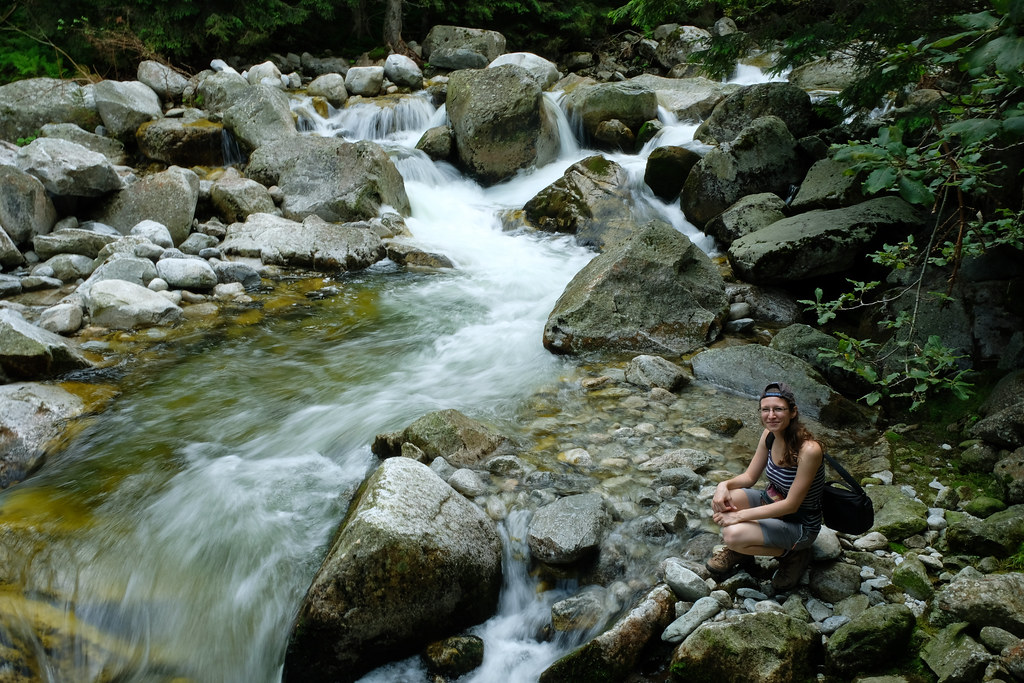 From our accommodation in the village of Rîu de Mori, we drove towards the water reservoir of Gura Apelor. For a while, the road was okay, later not so much. We saw the evidence of several landslides that damaged part of the road. We couldn’t tell how recently though – a month or a year before, who knows? We didn’t see any warning or road closure signs, but we weren’t too confident whether it’s a good idea to drive further.

Finally, we reached Gura Apelor, and the matter was settled: there was the road closure sign along with a barrier. We couldn’t tell the reason since the detailed information was written in Romanian, but it didn’t matter much. We were about 20 kilometres far from Poiana Pelegii and the trailhead to Bucura Lake. 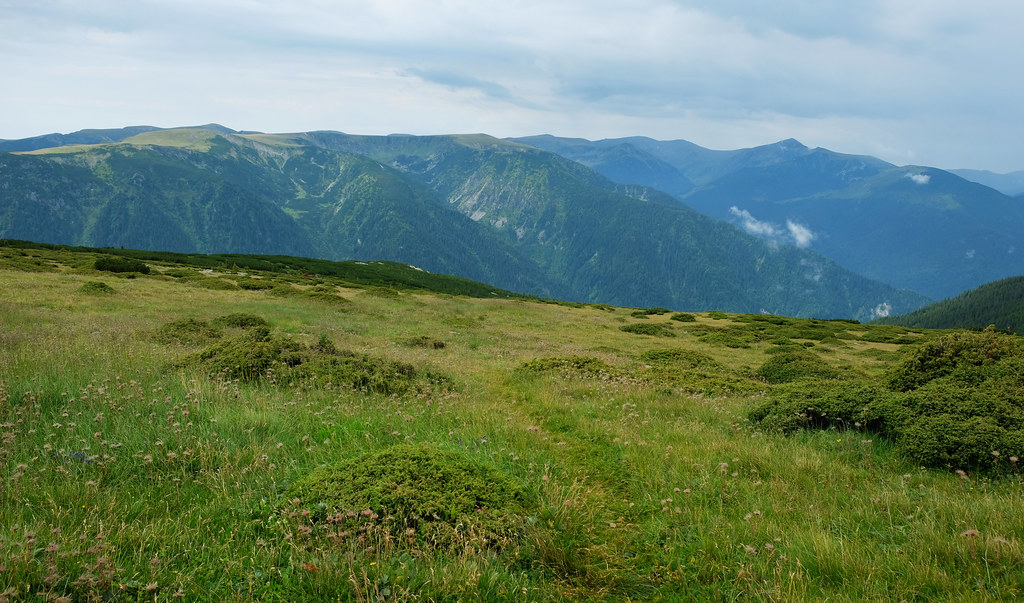 Some cars were parked there at the reservoir, we parked next to them. It was time to change our plan. We obviously couldn’t reach Bucura Lake from there and get back within a day. The weather didn’t look promising either, dark clouds were gathering.

We checked the trails starting from the reservoir (thank God, we had our offline maps since there’s no cell phone coverage there). We noticed a lake that looked reachable: Zănoaga Lake. I wouldn’t say it was close, but it was realistic as a day hike. 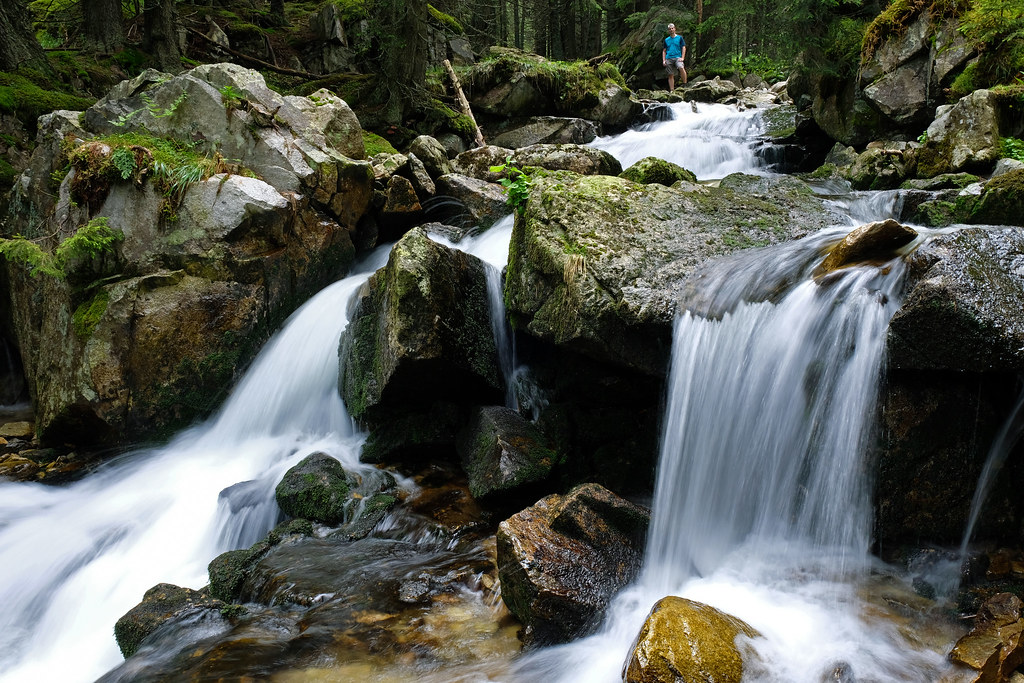 It started raining. But there was no thunder, and we hoped it would change for the better. We had to start the hike if we wanted to finish it before sunset. We put on our rain jackets and pants, and followed the blue sign.

The trail was steep. The rain stopped. Then the rain started again. It kept repeating during the whole day, and sometimes we wondered whether to turn back, but then it stopped and started clearing up again, so we hiked further. 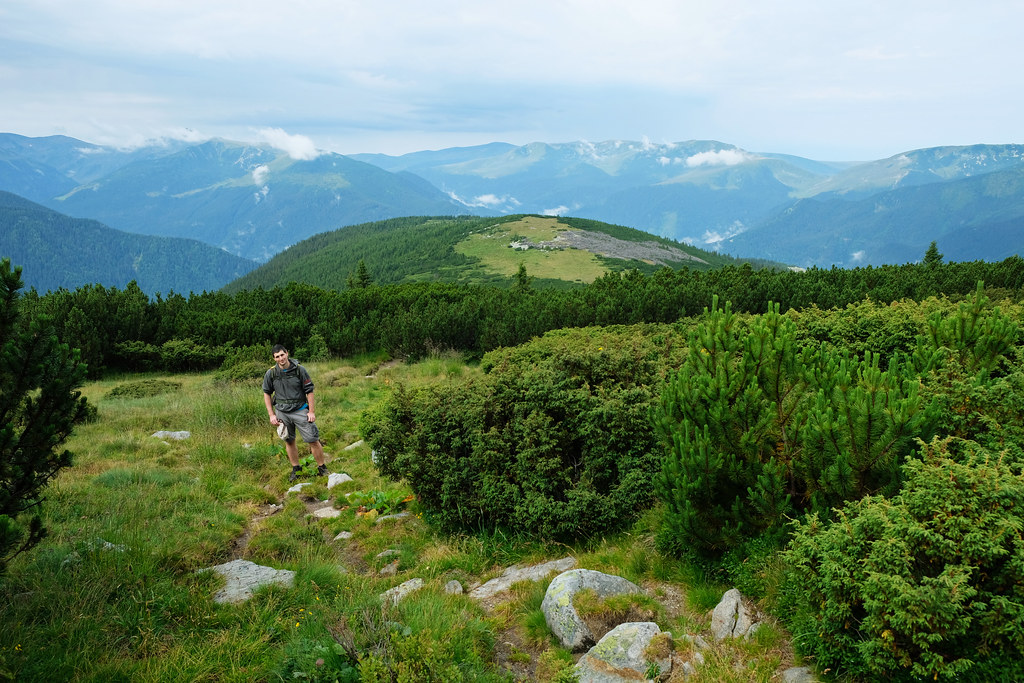 We left the forest and reached the wide alpine meadows. It was just nature and us (and no shelter from the wind and the rain… told you, it’s a wilderness). We didn’t even meet anyone. But we got what we came for. We experienced the beauty and solitude of this amazing landscape. And we reached Zănoaga Lake.

Zănoaga is the deepest glacial lake in Romania with 29 meters. It’s surrounded by giant peaks. And the moment we reached it, the rain started pouring like crazy. We quickly went to a mountain hut we noticed by the lake, and to our surprise, it was not empty. It was the accommodation of one of the mountain rescue teams in Retezat. 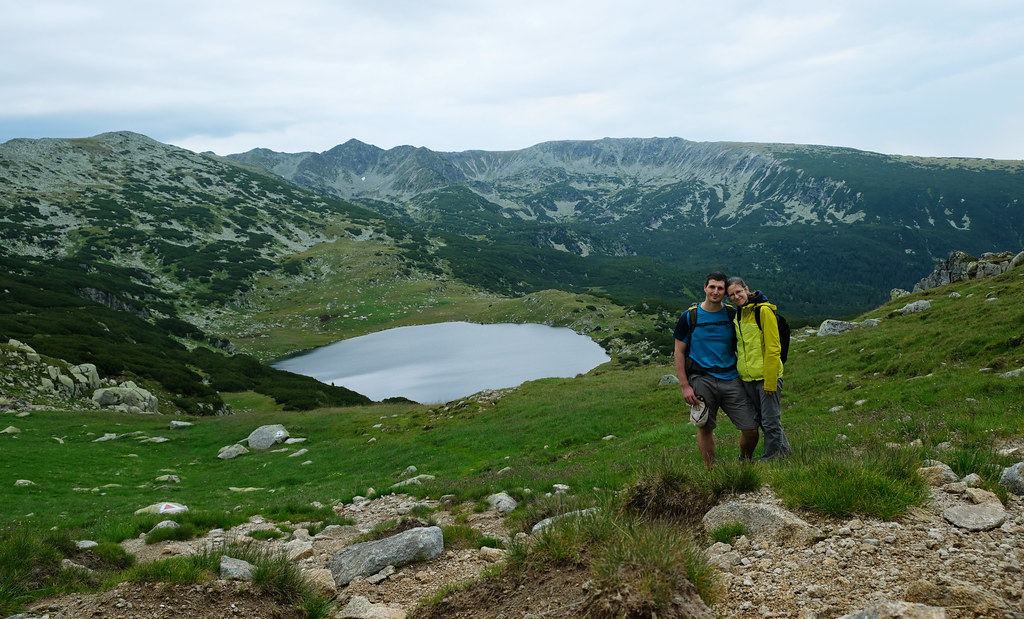 These people were so kind. They made hot tea for us, and we talked a bit. They told us the road was closed because of serious damages from landslides. And they quite agreed that Zănoaga Lake is the place for us to turn back. At least the rain stopped for a short time, so we could enjoy the views at the lake.

Then we headed back, coping with the wind and rain on the way down. We reached our car late afternoon, tired, dirty and satisfied. It was a wonderful day after all. And Retezat is a stunning place – and also a place that teaches you some respect.

Have you ever hiked in the Carpathians? Any favorite trails?