9 Things To Know Before Traveling To North Macedonia

9 Things To Know Before Traveling To North Macedonia We’ve been planning a Balkan road trip for years, and we just kept postponing it for several reasons. Then we jumped into it with the random idea that instead of Montenegro and Bosnia and maybe Albania, let’s visit North Macedonia. Why not? It has Lake Ohrid – and it does have Lake Ohrid, and it’s beautiful! But this country has much more to offer – without the crowds, because it’s among the most underrated countries in Europe.

What do you actually know about it? And what should you know about it to decide whether you’d like a visit there, and how to make the most of it? We’re here to tell you. 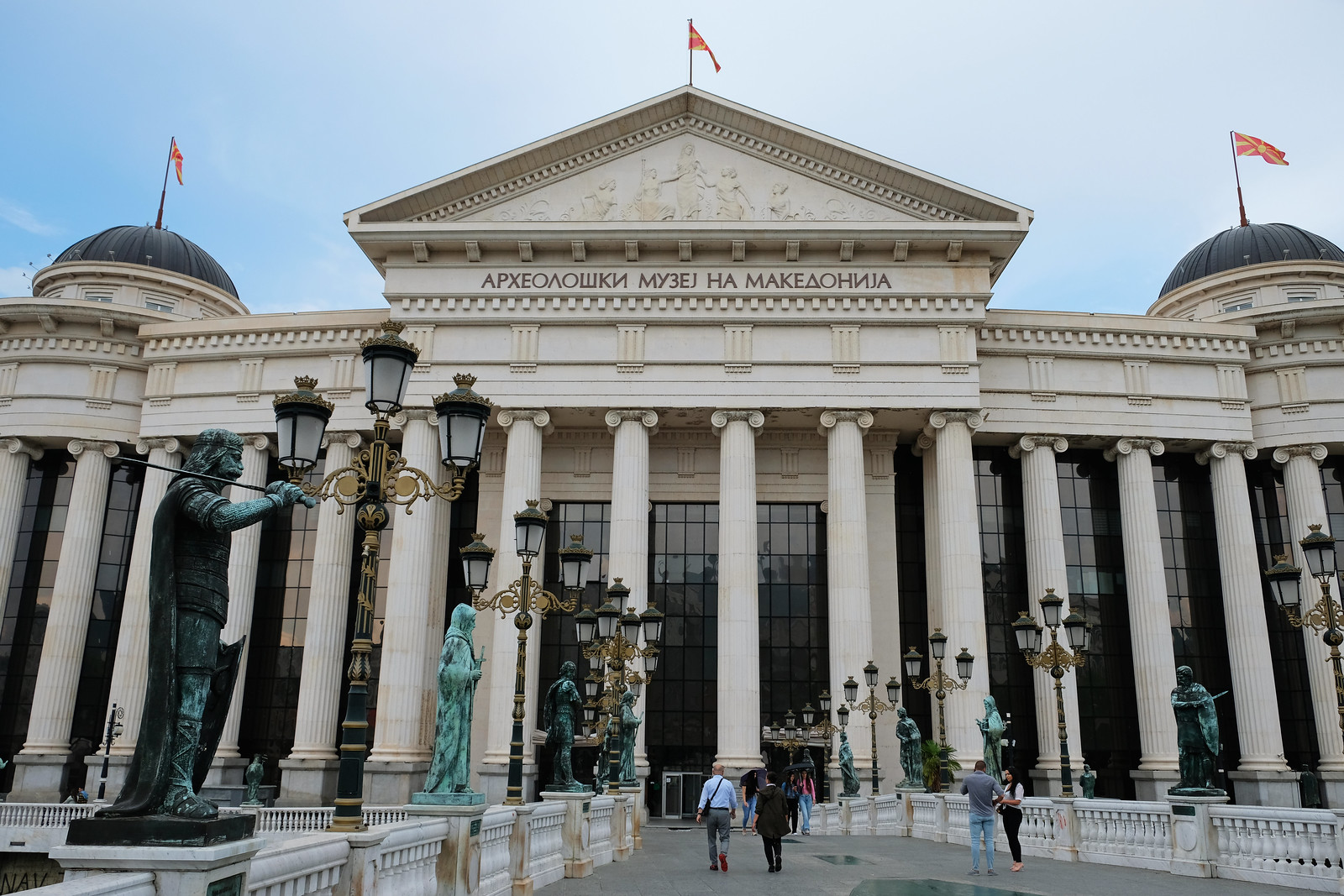 First of all, we need to start with the name – and a statement: while we use the name North Macedonia, this is not a political statement, we merely use the official name of the country.

But it was called Macedonia until February 2019, the renaming happened mainly in order to stop Greece from vetoing Macedonia’s entrance to the European Union. And it happened after years of UN-mediated negotiations between Greece and Macedonia, and also after a referendum which was boycotted by nearly 65% of the Macedonians. Hence it’s a sensitive and controversial topic, and many locals don’t accept the new name.

We are not here to summarize such a complex issue in a few sentences, but we’re telling you whether you call this country Macedonia or North Macedonia, someone will get offended. Since you can’t really avoid calling it something, we encourage you to be open and listen to the opinions and stories of local people – and also to do a bit of research about the history of this region.

It’s the land of mountains 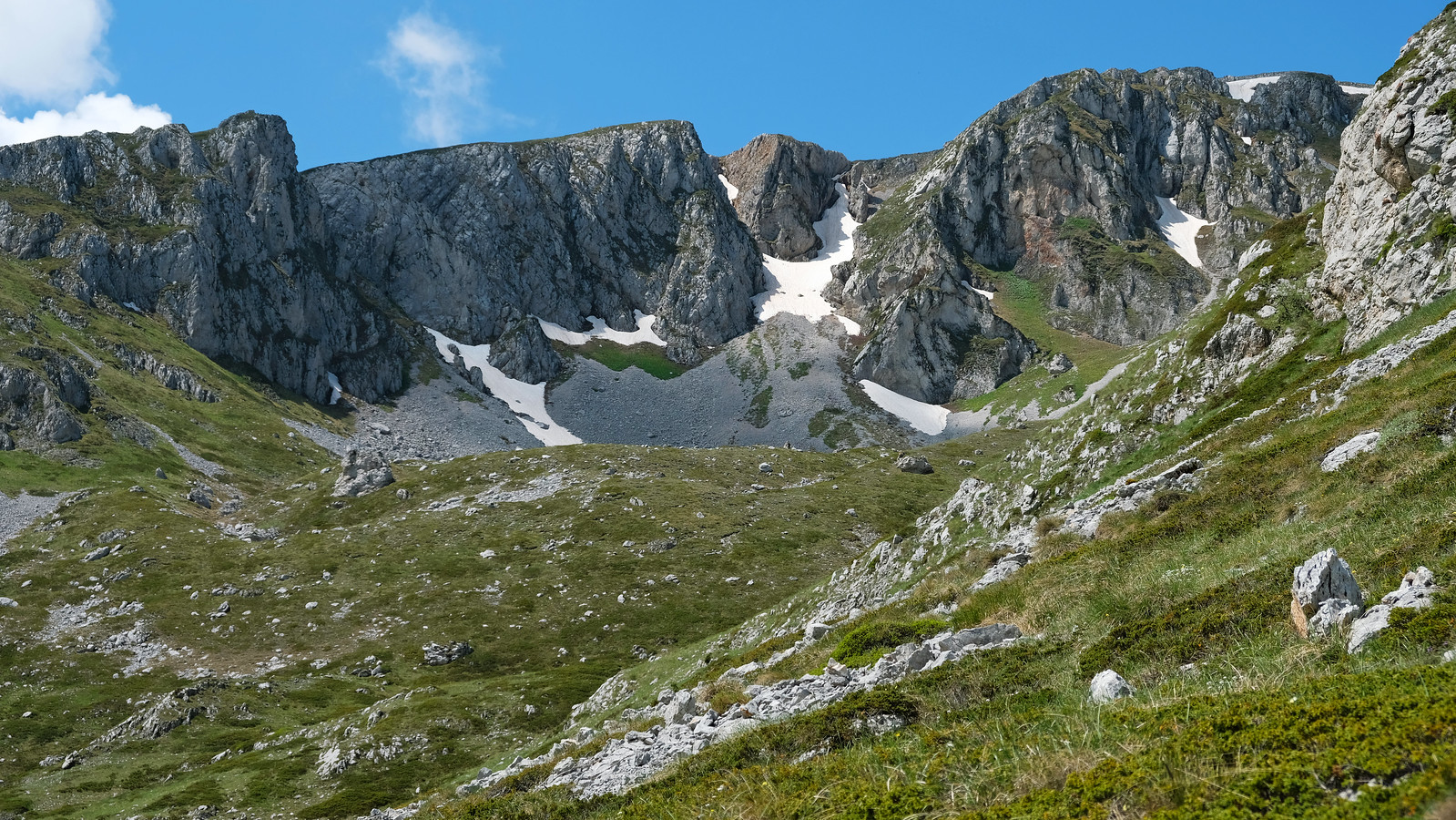 If you love mountains, this is your country as 85% of its territory is covered in mountains. With more than 30 peaks rising above 2000 metres, North Macedonia offers challenges, countless trails and pretty panoramic views. Ski resorts, too, in the winter. Its three national parks are all located in mountains: Pelister, Mavrovo and Galičica National Parks.

It’s really off the beaten path

We know it’s such a cliché, but it’s also very accurate in this case. Europe in general is touristy. Balkan countries are gaining popularity, and some of them are also very touristy. North Macedonia is not one of them – yet. Even people who take a road trip in the Balkans often only include a short stop in Skopje or at Lake Ohrid in their itinerary.

Our opinion is that this country deserves to be more than just a stop on your way to somewhere else. But being so undiscovered by tourists comes with both advantages and disadvantages. It’s not flooded with tourists, that’s the obvious advantage. In fact, we barely met any foreign visitors during the two weeks we spent there. We know it’s partially due to COVID, but we also know that lots of people don’t have a clue what’s worth seeing in North Macedonia. 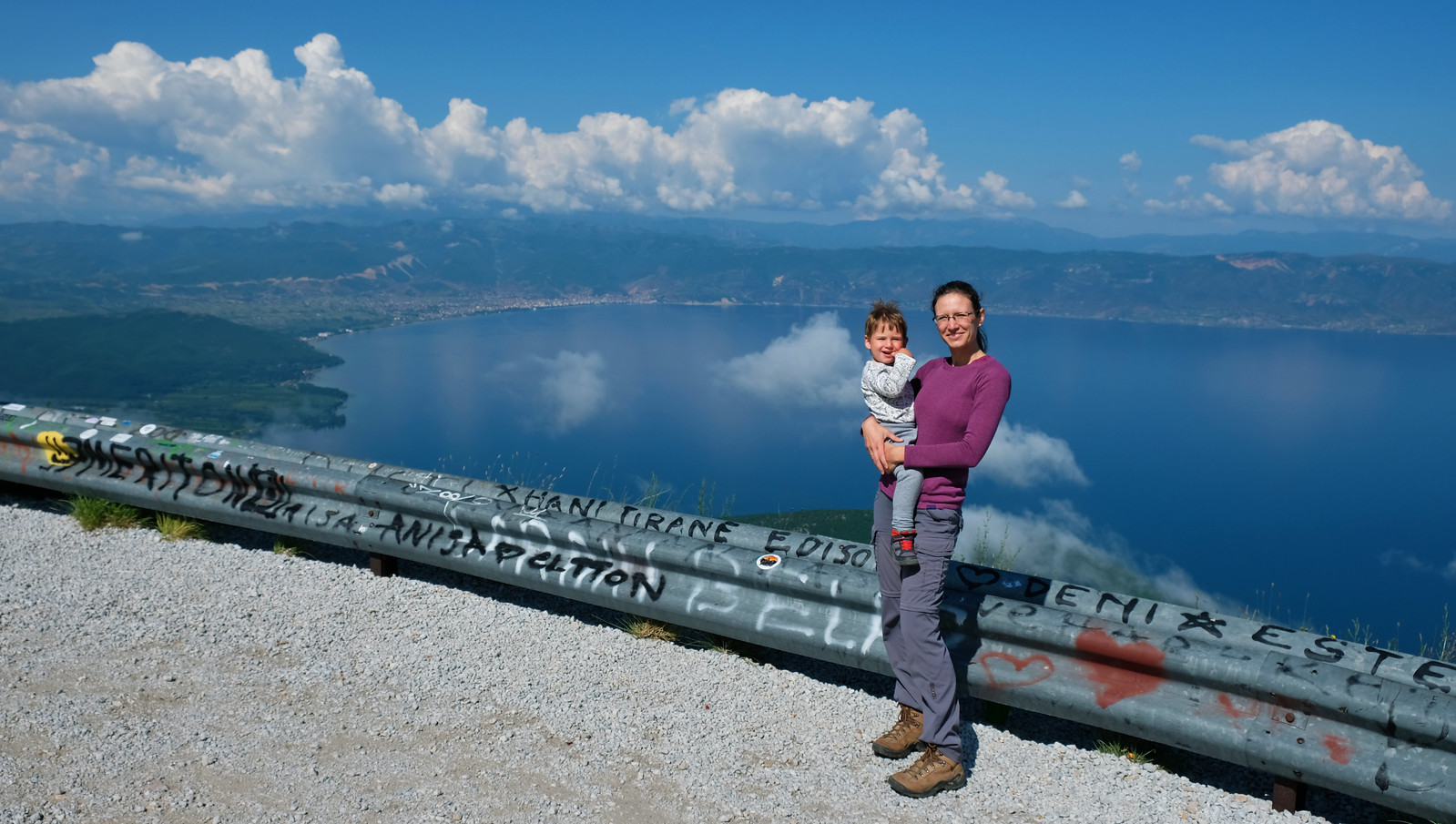 And there’s a lot to see, both natural and cultural attractions! But since it’s off the beaten path, sights are often not easy to research online, and detailed road and trail information is especially hard to come by. (Hey, adventurers, you can really explore here!)

We tell this not to scare you away from this beautiful country, but you need flexibility and an adventurous soul to enjoy exploring its lesser known areas. With that said, there are easily navigable areas like Skopje, Matka Canyon or Lake Ohrid. And you can also find local guides and tour companies, if you’re not confident to explore on your own. 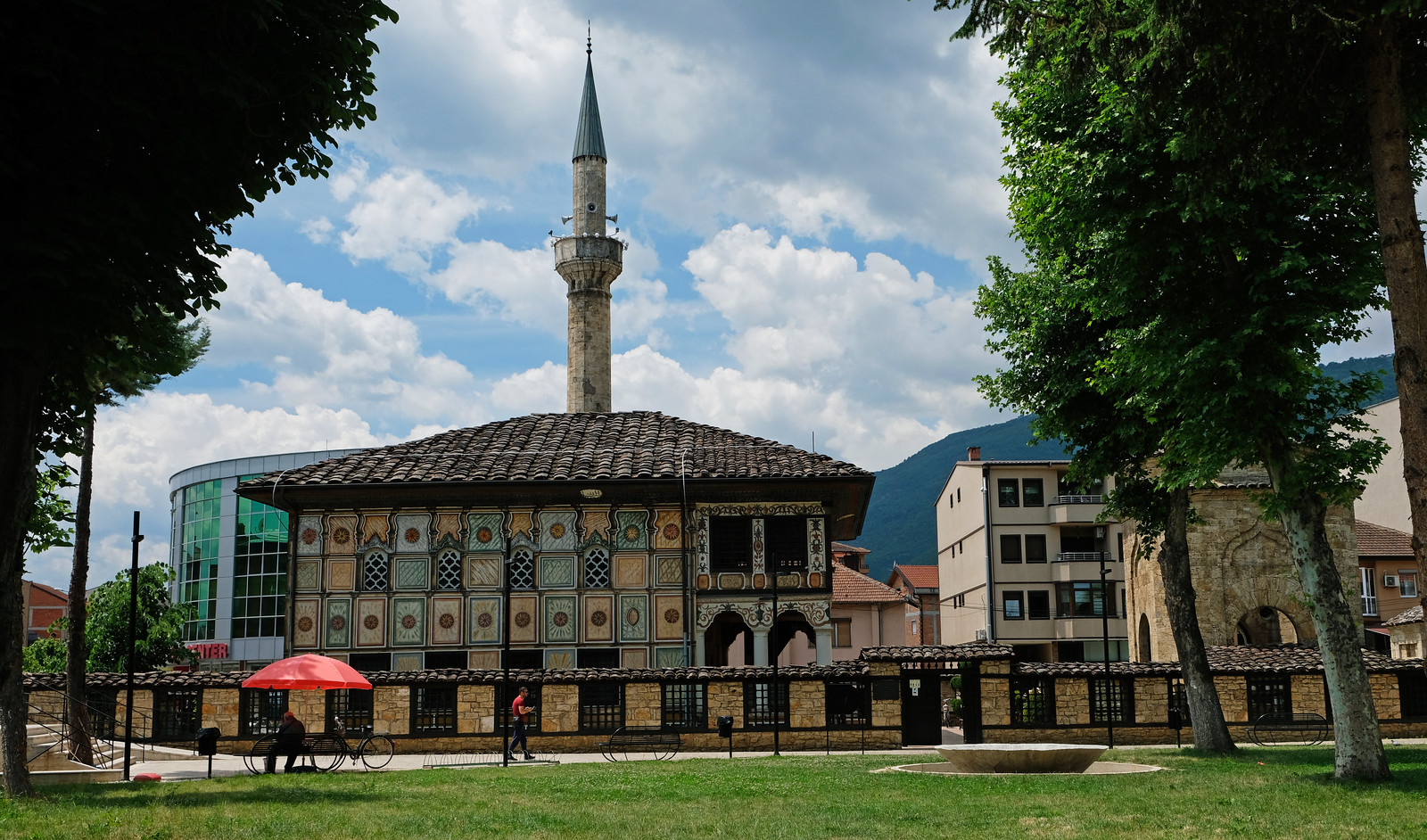 East and West. Asia and Europe. Islam and Christianity.

Religion is tied to ethnic and national identity here, and North Macedonia is mostly populated by Macedonians who are of Slavic origin and are Orthodox Christians, and by Albanians who are Muslims. Albanians are the largest minority, one-third of the inhabitants. Hence North Macedonia is a border zone of different cultures and traditions, and rich in both churches and mosques.

It’s a landlocked country, but it has Lake Ohrid 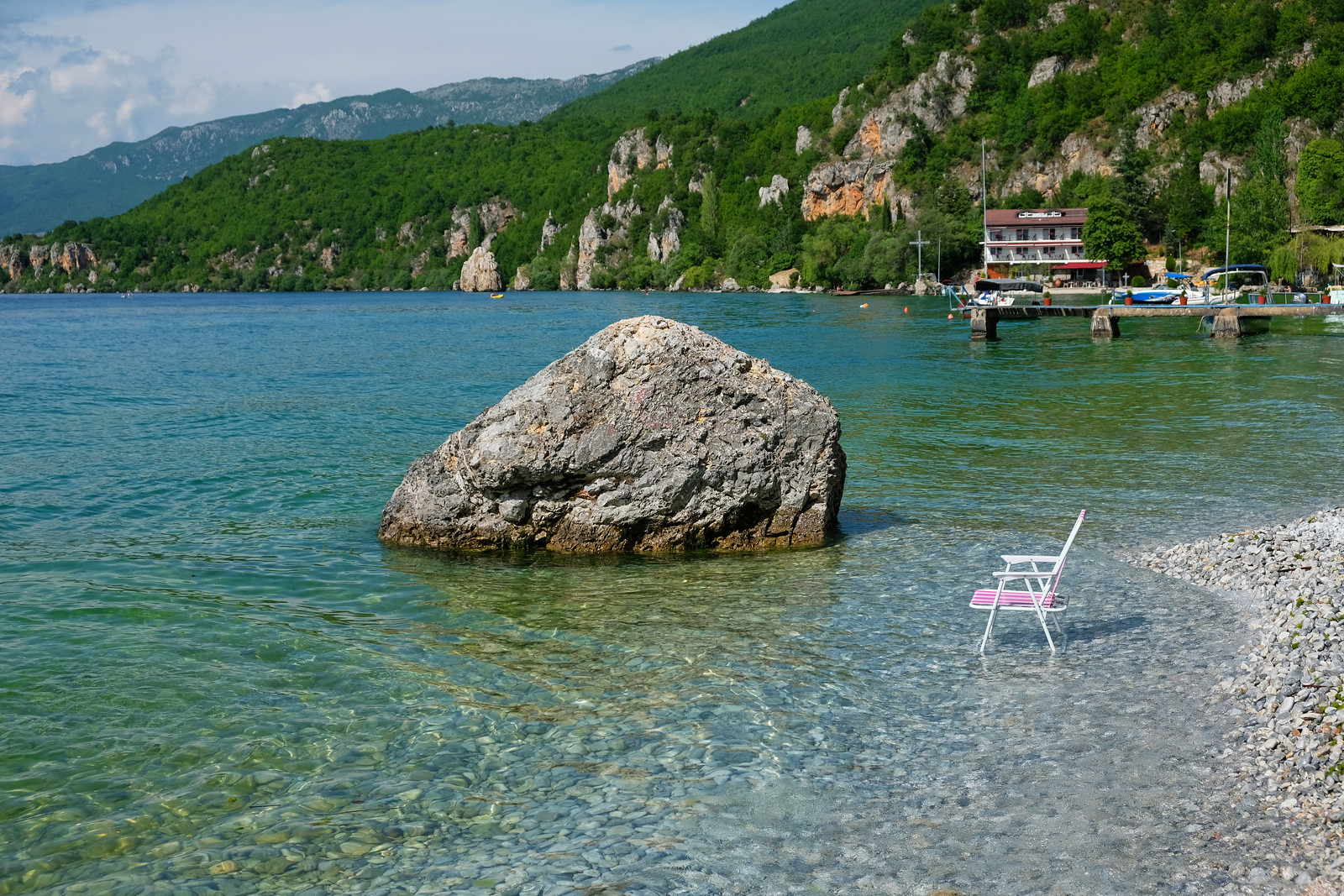 Unlike Albania or Montenegro, North Macedonia doesn’t have any seashore. But it has Lake Ohrid! You might think “well, fine, but that’s still only a lake at the end”. Yes and no. It’s a lake, one of Europe’s deepest and oldest lakes, that Macedonia shares with Albania. While we’ve seen many lakes before, Lake Ohrid still knocked us off our feet.

It’s really that beautiful! Some of its bays can be mistaken for the bays of the Adriatic Sea. The water is clear and has an incredibly blue shade. Its beaches are pebbly or rocky, and you can swim in the water.

Lake Prespa is not comparable to Lake Ohrid 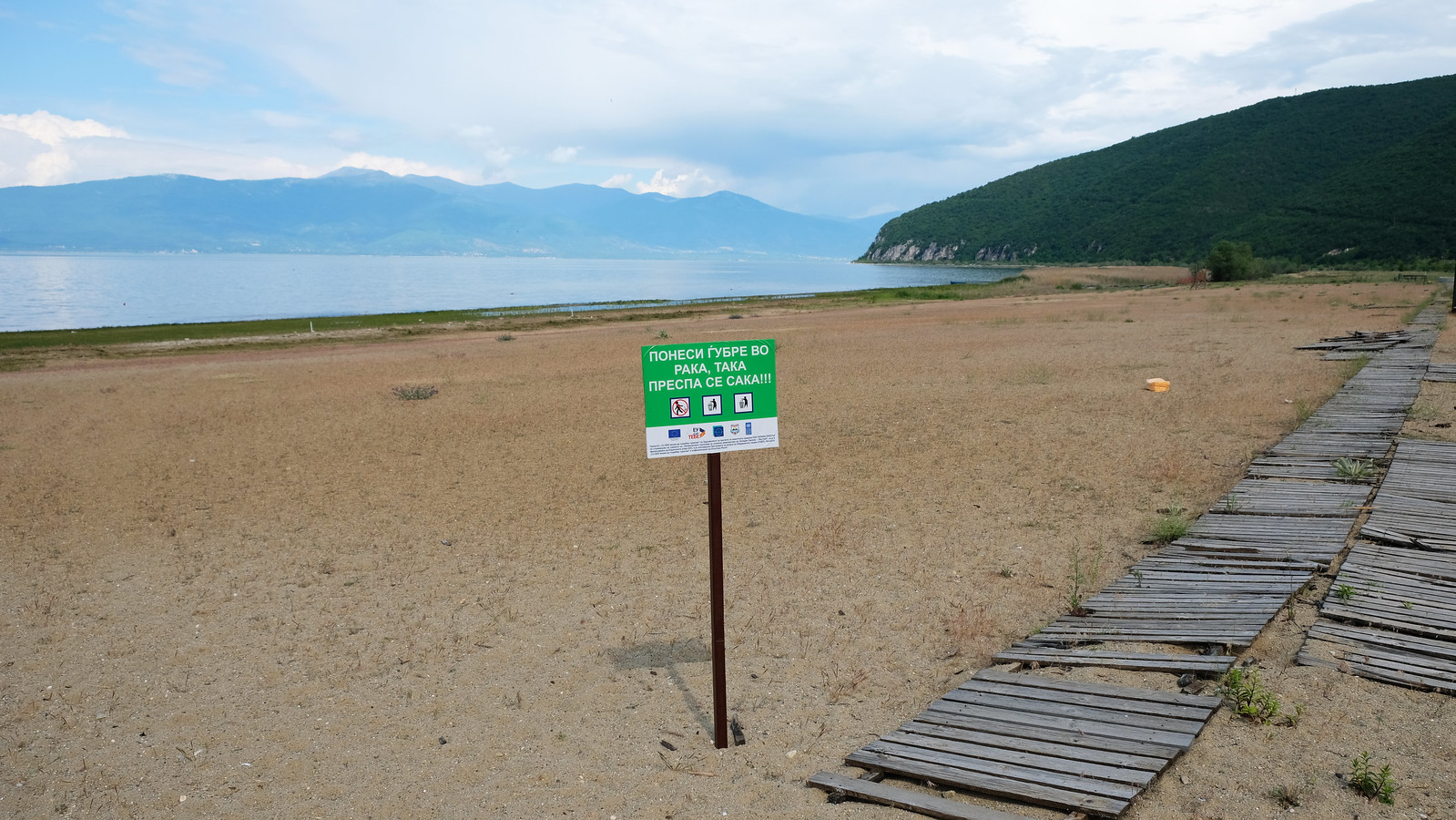 They’re the two largest lakes in the country, they’re both tectonic lakes, and their source is the same, too. Yet if you consider from a visitor’s point of view, you can easily spend a week at Lake Ohrid, swimming, paddleboarding, hiking, taking boat tours, visiting the town of Ohrid or the monastery of Saint Naum, while Lake Prespa doesn’t offer much. What we liked about it the most was the views of the lake from Galičica and Pelister National Parks.

We also stopped at Stenje Beach and Slivnica Beach on the shore of Lake Prespa, but we found them disappointing. They’re abandoned and look lifeless. The jetty is broken, the toys on the playgrounds are broken, and the shore of the lake is swampy. We don’t know if anyone uses these beaches anymore, but they gave us the impression that they don’t, and it was not hard to understand why. It was a sad sight, no one was there on that hot June day, and we, too, quickly continued our way towards Bitola.

Skopje, the capital is both very old and new 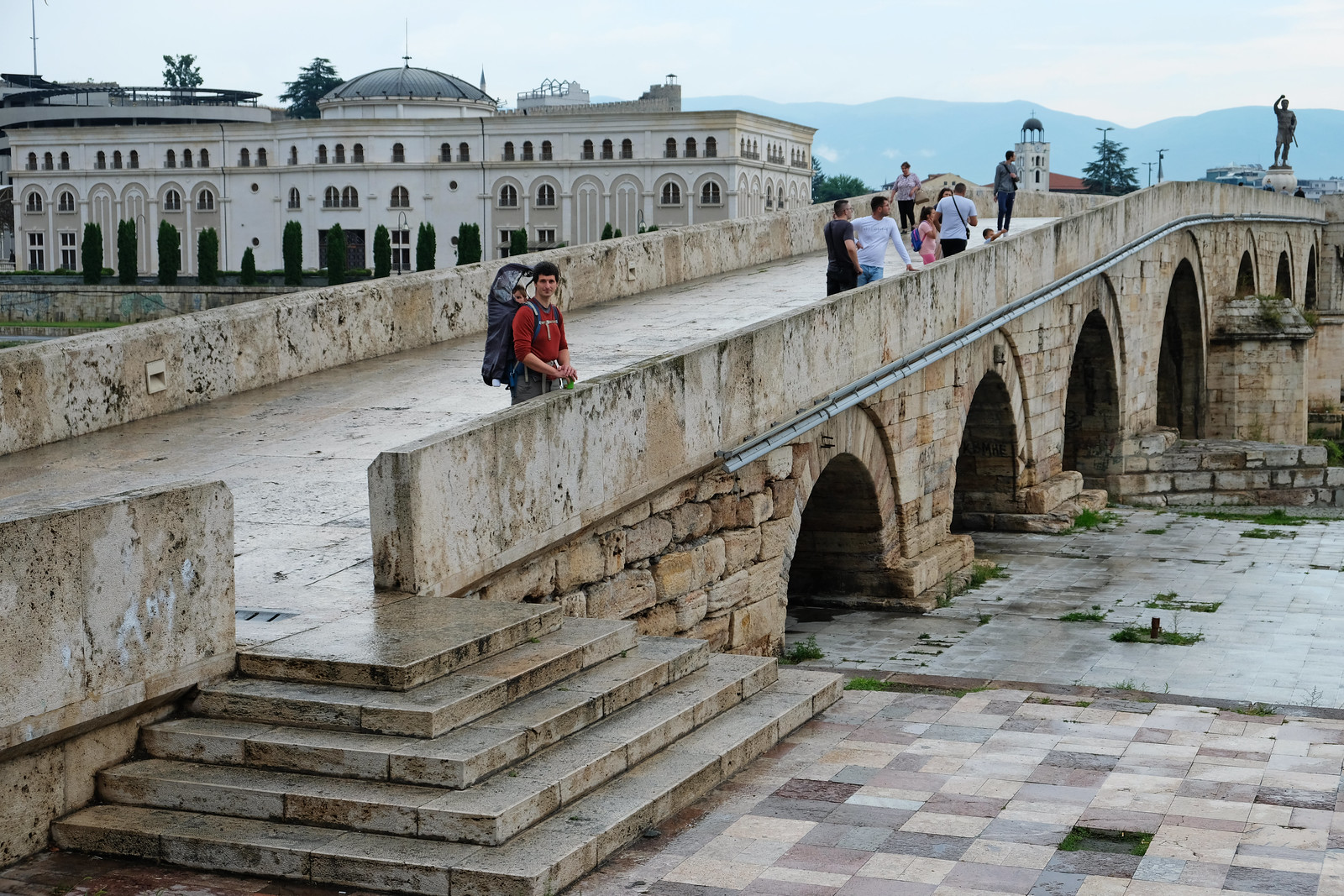 Skopje is an ancient city, it’s inhabited since at least 4000 BC. Remains of this ancient settlement can be found within the old Kale Fortress. The Stone Bridge that connects the main square, Macedonia Square to the Old Bazaar was built on Roman foundations.

But an earthquake destroyed approximately 80% of the city in 1963, hence a project called Skopje 2014 was introduced to give back the classical appeal of Skopje. Between 2010 and 2014, 136 structures were built. The project was heavily criticized though, stating it was too expensive and a waste of resources, and also that it was an attempt to change the nation’s history. Of course, some criticized the aesthetics of the buildings, too.

Whatever you think or know about Skopje 2014, you’ll definitely notice these new classical buildings when walking around in Skopje’s center. 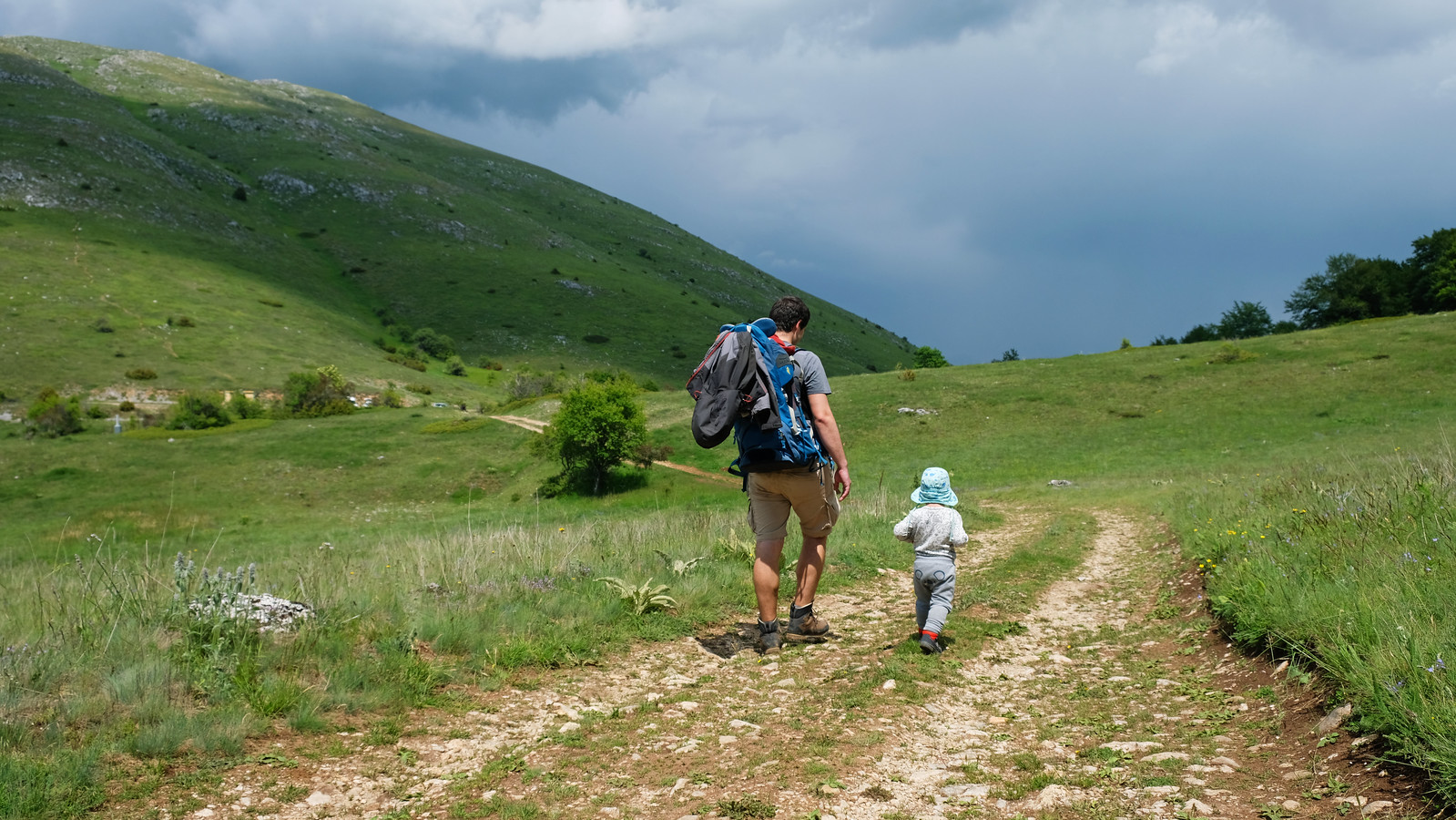 Traveling a lot in Europe and living in Budapest, a city that struggles with overtourism (not in the years of COVID, but in general), we got used to the fact that people are often neutral or even irritated with tourists. Well, not in North Macedonia. We felt welcomed, we felt that locals were happy to see us there, exploring their country.

Some of them spoke English, many of them not, but they were all eager to know where we came from or what places we visited in the country. They were also very warm and friendly towards our little Tomi, asking his name, showing him cute kittens that he can cuddle or giving him chocolate. (Here I have to confess that I ate that chocolate, all of it. 😛 We haven’t given Tomi any chocolate yet, and want to keep it that way until we can.)

The thing we liked the least: the driving culture 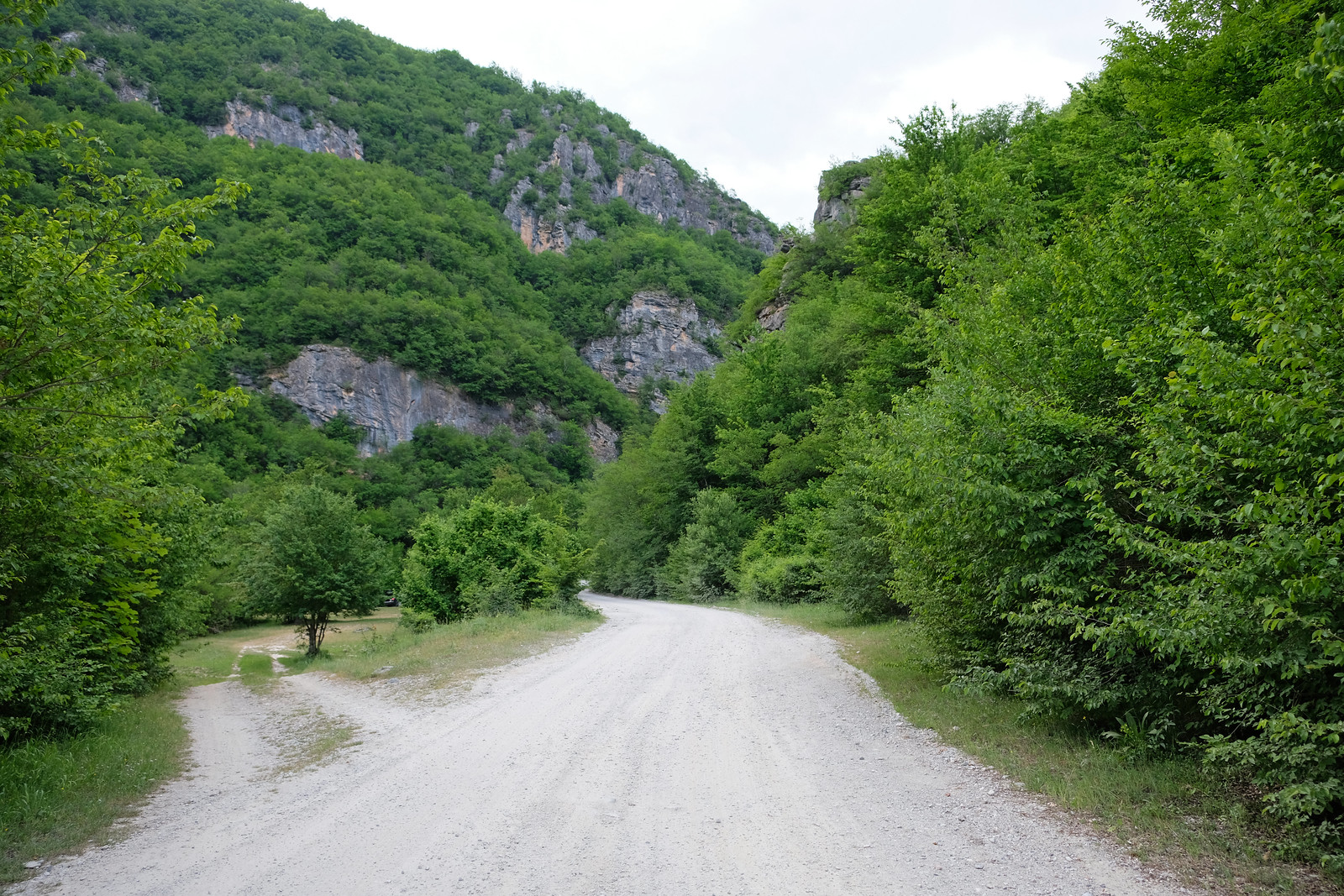 No, it’s not even the roads. Though the roads are of varied quality, most of the roads we took were acceptable, and the motorway was fine. (But don’t count on Google Maps! It may tell you to drive on “roads” that are actually trails.)

Our problem was the driving culture. We barely managed to avoid two accidents, caused by careless drivers who passed other cars on mountain roads where one can’t even see whether another car is coming. It looked like they didn’t even care, even though we were coming, and luckily we pulled our car off the road both times to avoid a head-on collision – and luckily, there was a grassy area and a small parking area (for the second time) where we could actually pull off safely.

We know it’s not a typical North Macedonia thing, rather typical to all Balkan countries. Speed limits, lanes, prohibition signs seem to be optional to a lot of people, and they often simply ignore it. Be very careful and vigilant, especially on narrow mountain roads! (And we know, it’s not enough for you to be careful, others should be, too.)

So is North Macedonia worth a visit?

Have you been to the Balkans? Which are your favorite places there?