We knew that the Wild Atlantic Way and its coastal hikes will be a highlight of our Irish road trip. Because we love pretty coastal drives and hikes! What we didn’t expect is that we were spoiled with memorable birdwatching moments on this road trip, as well. In case you doubt birdwatching is an exciting activity, just google for “puffin” or “razorbill”. And in case you’re eager to do some birdwatching in Ireland, we’re sharing the best places we found.

Being an island, Ireland has a relatively low diversity of birds. But being an island, Ireland is home to large colonies of seabirds – including Arctic terns, Atlantic puffins, kittiwakes, shags, guillemots, razorbills, storm-petrels, northern gannets, oystercatchers or roseate terns. Most of these birds prefer the high, steep and unreachable coastal cliffs and the smaller, uninhabited islands off the coast of Ireland. 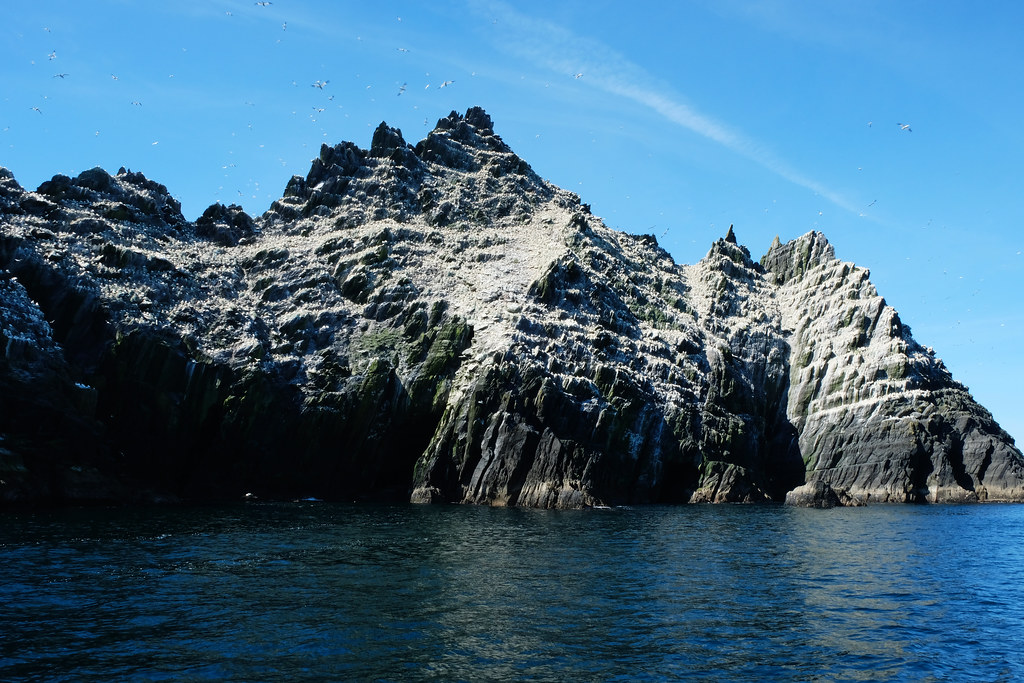 Observing them in their natural habitat is not comparable to anything else – not to mention how beautiful that natural habitat is. And just like every wildlife watching experience, it’s full of unforeseeable, unexpected and wonderful moments. Lots of surprises, but no guarantees. We love that. (It reminds us of life itself, said the wise 30 years old me…)

While you can reach the islands with boat tours, those steep coastal cliffs are usually great places to hike. Whether you have luck with seabirds or not, the views will surely be stunning. By the way, in addition to luck, it’s also good to have a pair of binoculars. And then let’s see where to go: 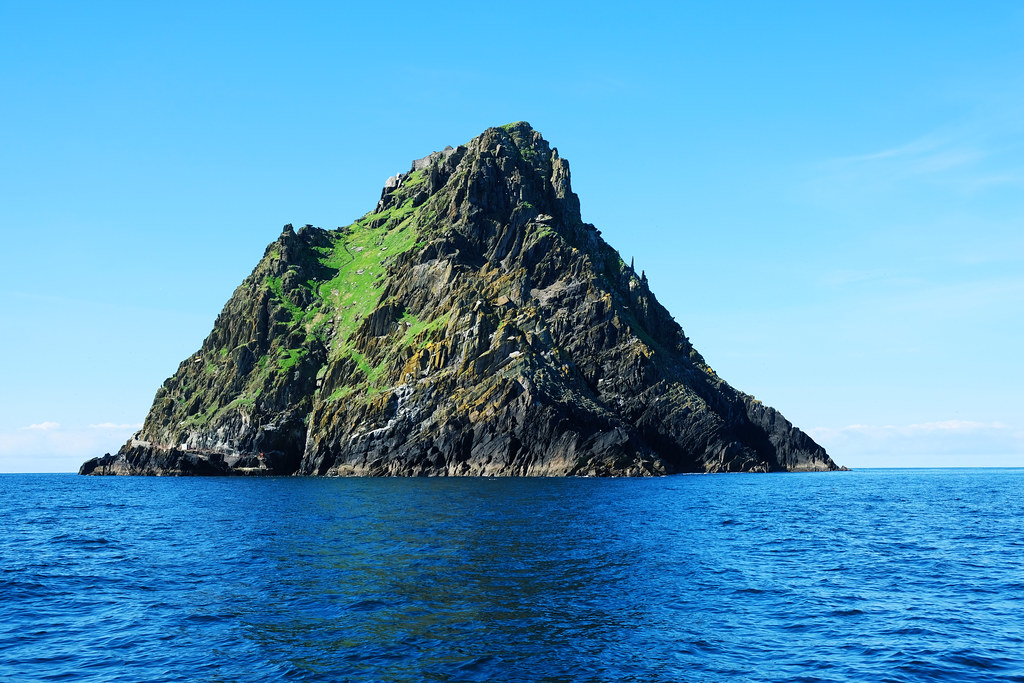 Where the Force awakens… Do you remember that so-very-green, dramatic island where Luke lived in the newest Star Wars movies? That’s Skellig Michael. The Star Wars shooting is probably the reason for its fame, but it’s not the only reason why it’s so spectacular. We’ve actually found it because of the birds.

A couple of seabirds don’t sound that interesting, do they? But the thing is that it’s not just a couple of birds. The Skellig Islands – Skellig Michael and Little Skellig – are home to countless seabirds, including the cutest ones ever: puffins! Yes, it’s possible to see puffins in Ireland. We’ve seen them at several places, and the Skellig Islands are where we’ve seen the most. We explored them on a half day boat tour that turned out to be our favorite bird watching experience in Ireland.

Read more about our visit to the Skellig Islands here! 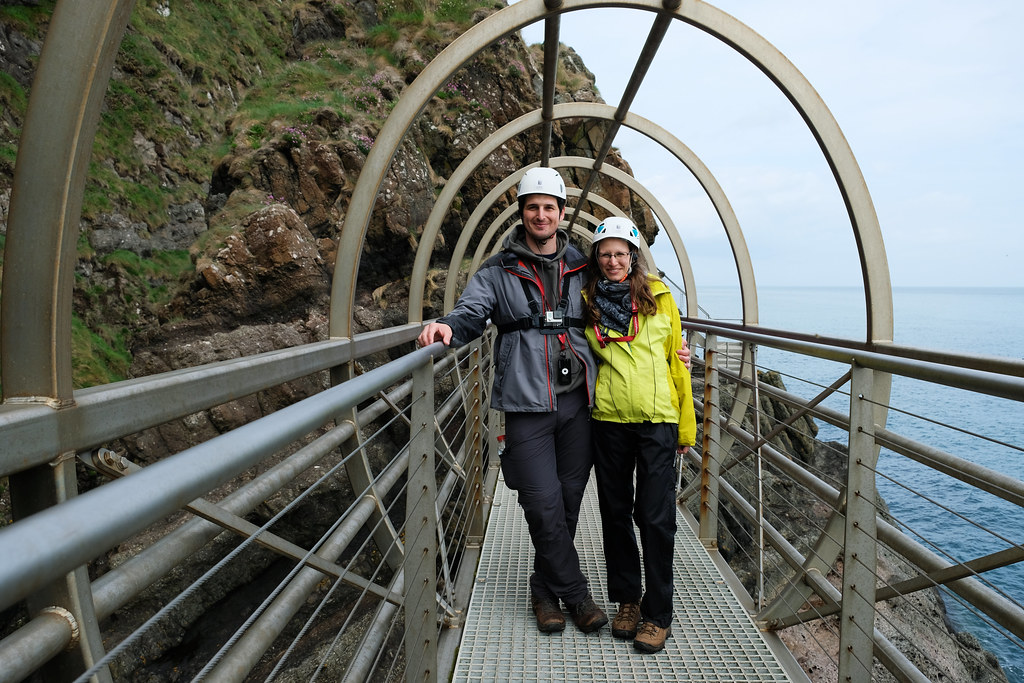 Though the boat tour to the Skellig Islands was our absolute favorite, we had another truly memorable bird watching experience on the mainland. The Gobbins Walk. This path through narrow tunnels, bridges and staircases carved into the coastal cliffs on the Causeway Coastal Route is spectacular as a hike, too. But the real highlight for us was the rich birdlife.

Here we come to puffins, again. Because the cliffs at the Gobbins are home of the only mainland colony of puffins in Northern Ireland. And they’re home to several other bird species, too – kittiwakes, shags, guillemots or razorbills. Even though we only saw a grand total of one puffin during our walk, we weren’t disappointed. 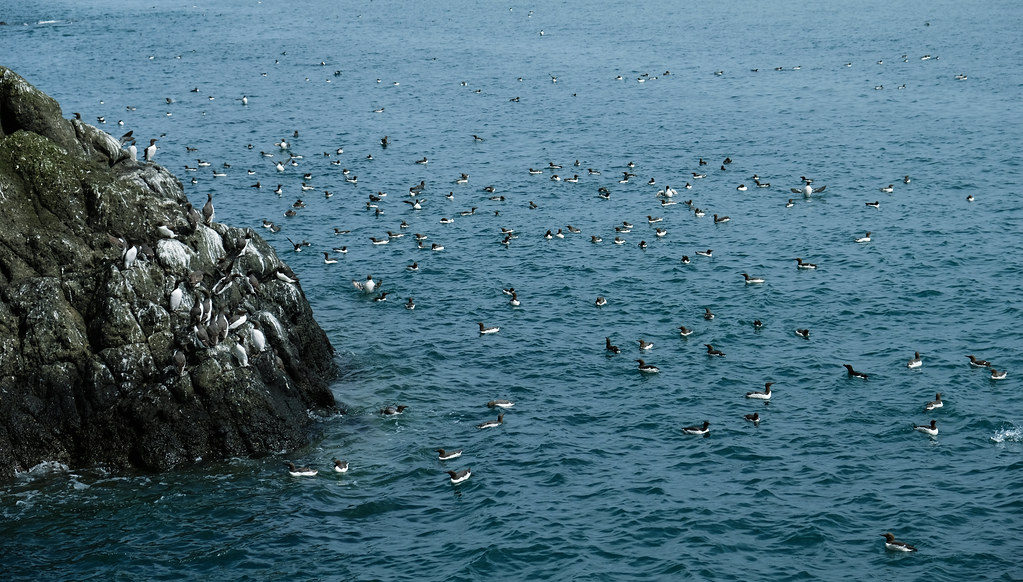 First of all, one puffin is more than zero. On the other hand, we saw lots of other birds nesting on the cliffs or diving for fish in the sea. We found razorbills especially cute. We caught a glimpse of cormorants drying their wings on the sea cliffs.

After falling into disrepair for decades, then being extensively renovated, the Gobbins Walk has been reopened. Today it can be explored on a guided walk – that we enjoyed so much. We had a knowledgeable and enthusiastic guide who told us everything about the birds we saw and answered all of our weird questions. (Well, we were never good at biology. We eagerly learn from nature and well-educated tour guides, though.) 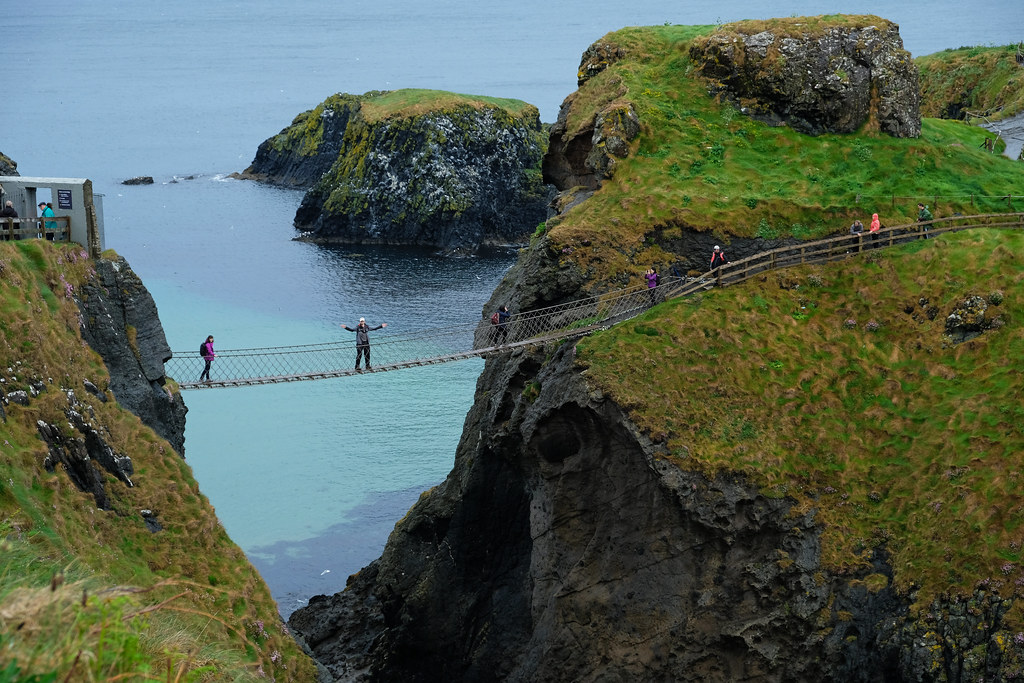 Carrick-a-Rede Rope Bridge is the Insta star of the Causeway Coast, and it’s a bit overhyped in our opinion. This pretty little rope bridge connects the coast with Carrick-a-Rede Island. It offers views of the surrounding azure bays. And walking across the rope bridge – about 100 meters above sea level – is fun!

But to get the best views, you better arrive there when the sun shines – which doesn’t happen that often. Grey clouds and pouring rain was not the only reason we were a bit disappointed when we arrived. (Of course, those azure bays didn’t look anything like on Instagram in that weather.) It was also that we realized that the island itself is small. Very small. We planned to do a short hike around it, but we took about 20 steps, and we were done.

There was one thing there to brighten up our mood. Birds. The steep cliffs of Carrick-a-Rede Island are home to sea birds, and we got a close view of them while walking on the island. 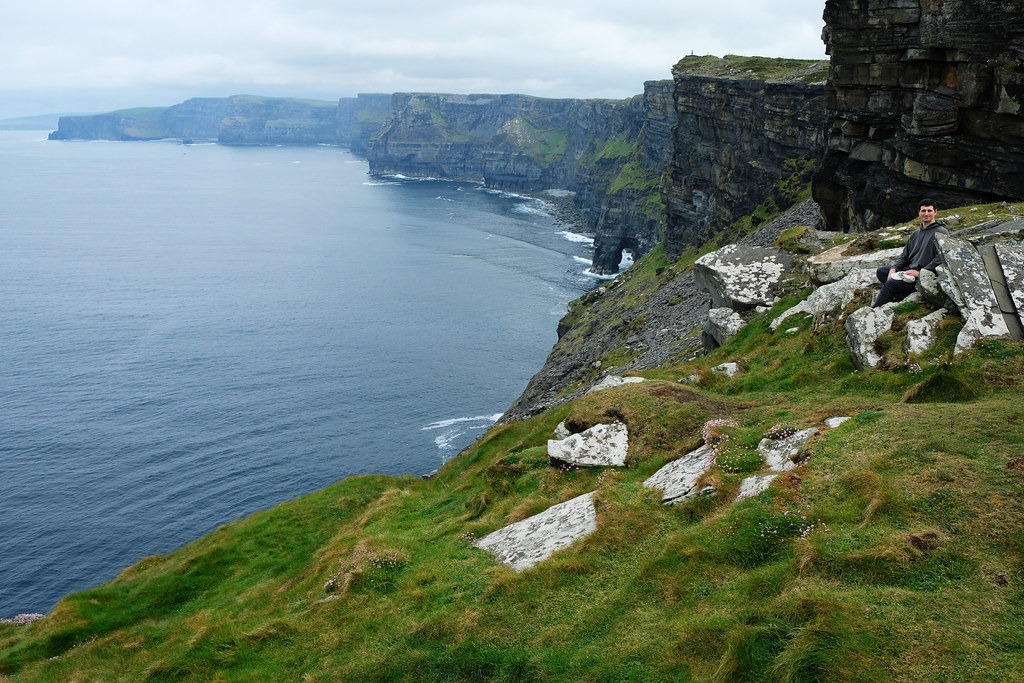 So birds like nesting at steep cliffs where they are unreachable. And Ireland’s most famous cliffs, the Cliffs of Moher are tall, steep and unreachable enough. They rise 100-200 metres above the Atlantic Ocean. They are home to more than 20 bird species, including puffins and razorbills.

We enjoyed the coastal hike in both directions from the visitor center, and we saw lots of birds around the cliffs – well, until everything disappeared in the fog. Again. 😀 Hag’s Head was our favorite bird watching spot. There we even saw a puffin far below us. Yes, again. We were really lucky with birds in Ireland. 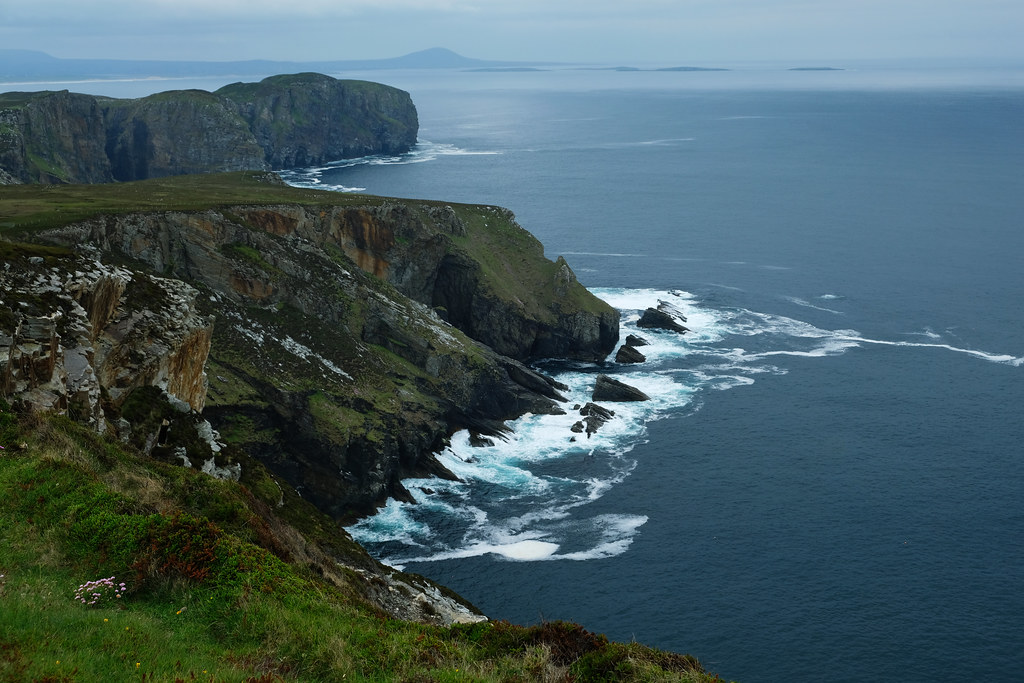 Horn Head is a peninsula with its cliffs rising out of the water to a height of 180 metres. And it’s an important area for seabirds to breed. The Wild Atlantic Way brought us along the peninsula, and since it was not raining at that moment, we took the chance to do some hiking.

We hiked to the tip of the peninsula and were rewarded with astonishing views! Some birds, too. Then it started drizzling which does not count as “rain” among Irish people. We saw the proof of that on this hike. A cheerful group of Irish hikers just started to lie down on their (waterproof) picnic blankets as we decided to turn back because “we’ve seen it all, and it’s raining again”. Well, you can’t get everything. We had luck with birds. We didn’t have luck with the weather. Disclosure: We paid for all of the tours mentioned in the post ourselves. Like always, all opinions are our own.