Transfăgărășan Highway climbs to the second highest mountain pass in Romania and is probably the best scenic drive in the country. It runs through the wild and unpredictable Făgăraș Mountains and gives access to breathtaking Lake Bâlea, pretty waterfalls and high peaks. We share our experience driving the Transfăgărășan – and all the tips that can make your trip more enjoyable.

First of all, we have to admit that driving in Romania was not our favorite experience. The landscape is usually wonderful, but the quality of the roads are quite varied and unpredictable. Just to be straight, it means bad in most cases. We don’t mean the newly built motorways, but the country roads, and especially the mountain roads. They are quite scenic, actually, but we were too busy looking for large potholes on the road, and paying attention to crazy drivers passing in the blind curves. 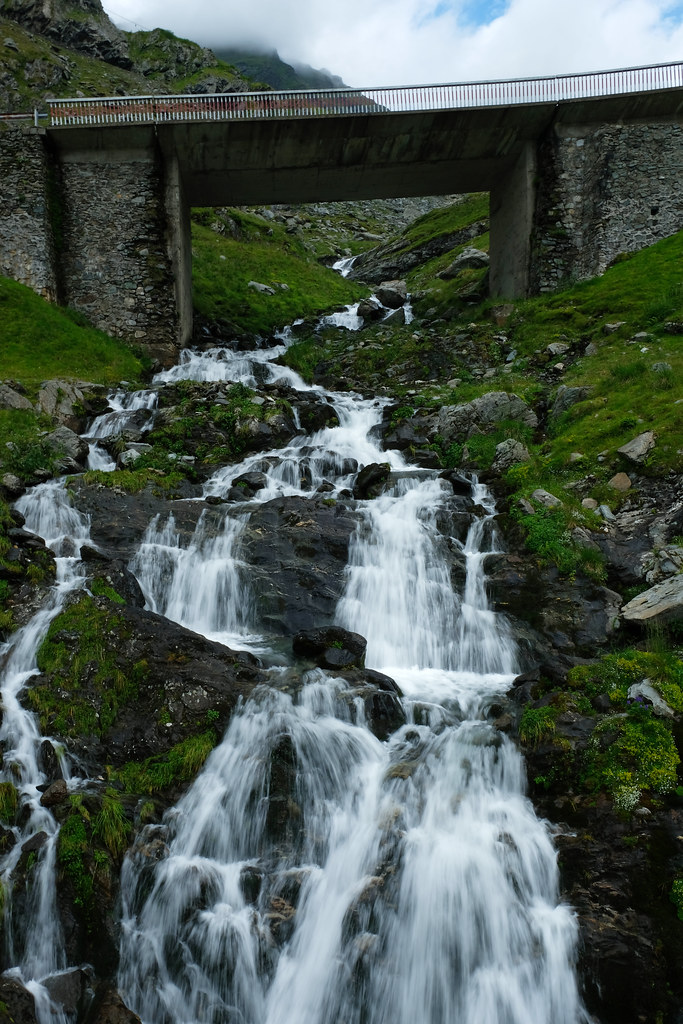 No, we definitely wouldn’t say we enjoyed driving in Romania. Transfăgărășan Highway was an exception though. This road is of good quality for the most part. And even though it’s a winding road with lots of blind curves, it’s not that narrow. We usually had two lanes, so oncoming traffic was not such a headache, that’s what I mean. And, of course, the views. Those incredible views!

Where is the Transfăgărășan Highway?

Transfăgărășan Highway (road DNC7) climbs to the second highest mountain pass in Romania. Its highest point is at 2042 metres. It’s a tunnel that connects the northern and southern sides of the drive at Lake Bâlea. 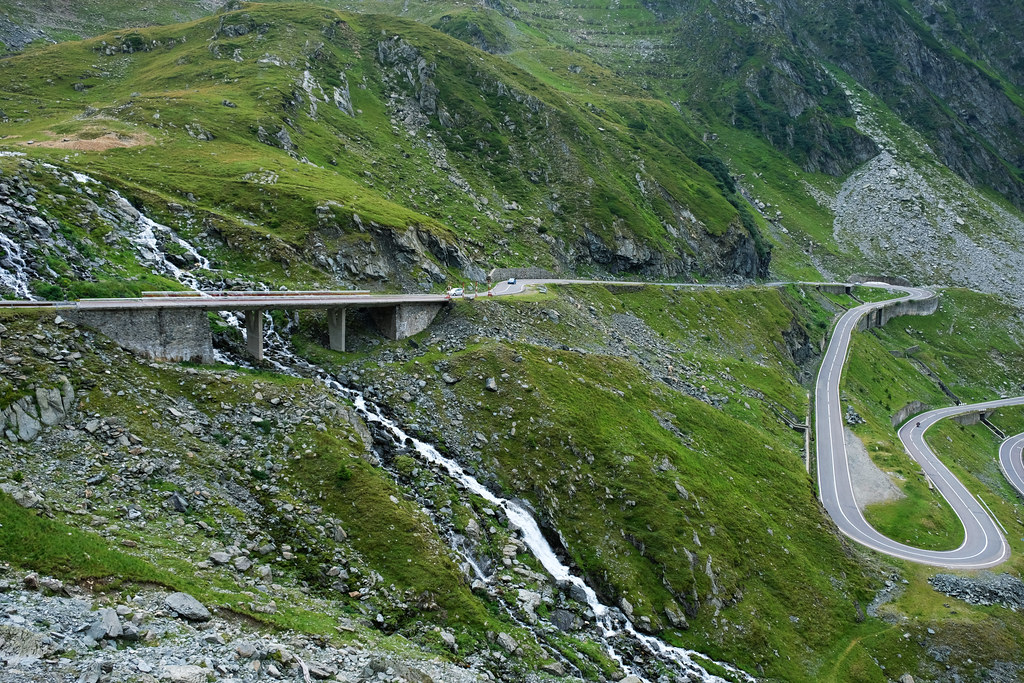 It starts from Cârțișoara and ends at Curtea de Argeș on the other side of Făgăraș Mountains. It’s about 115 kilometres long, and the pure driving time you need to do it is about 3 hours – according to Google. However, you certainly better not believe Google Maps in this case. (Be careful with Google Maps in Romania in general. Sometimes it recommends roads that you definitely don’t want to take with a normal car. Or any kind of car.) 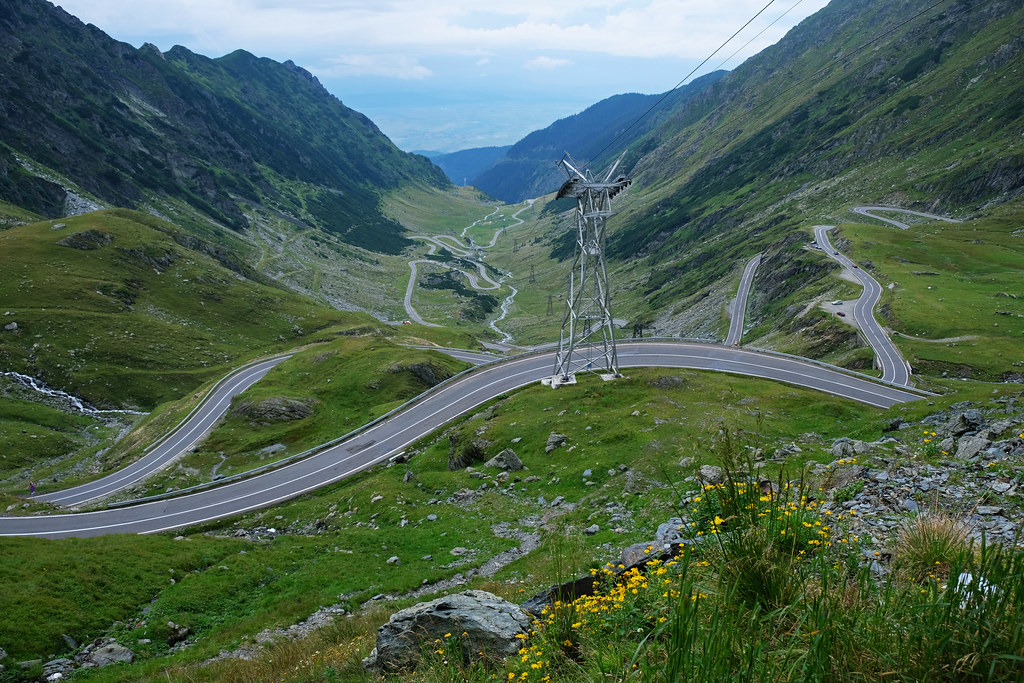 Transfăgărășan Highway is a winding road with lots of hairpin turns, sharp ascents and descents. It can get quite busy, too. There are not too many pullouts or parking lots to stop along the road, but most people try to stop – or at least take pictures from their car. You will want to stop and take pictures, too. Frequently.

So be prepared that you’ll need more time to drive the Transfăgărășan than what you expect. Not to mention if you have longer stops, because you plan to do some hiking, too.

History of the Transfăgărășan Highway 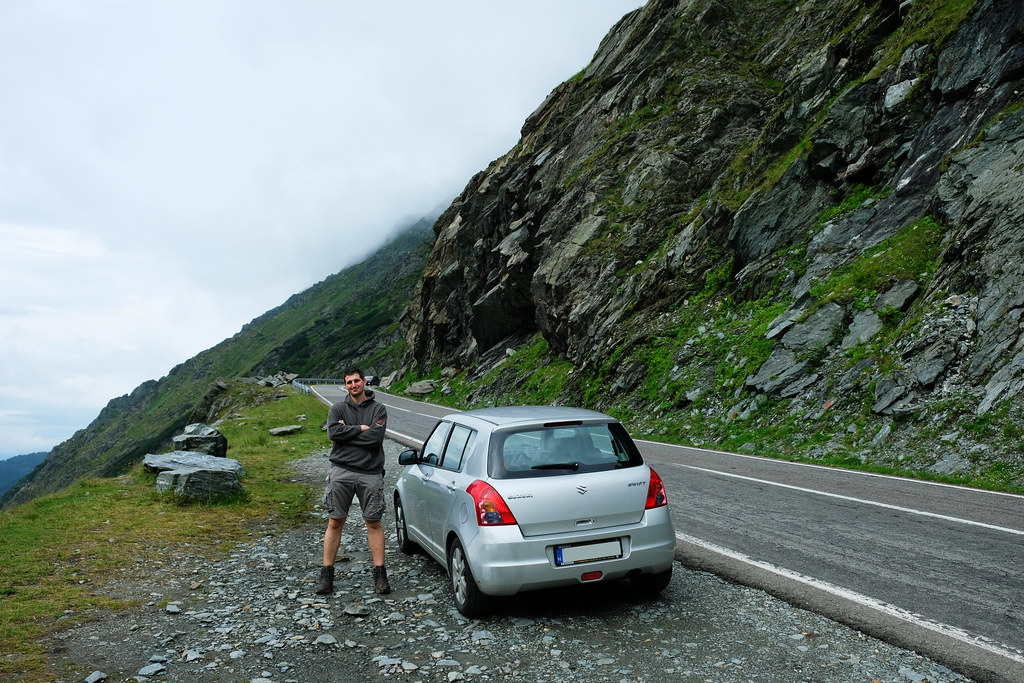 The history of this road deserves a couple of words. It’s a bit unusual – at the same time, it’s a very typical Eastern European story.

Transfăgărășan Highway was built from 1970-1974 on the personal orders of Nicolae Ceaușescu, the communist dictator of Romania. Why? Most probably because this huge mountain was there. So let’s build a road that crosses it to show the world what amazing achievements the socialist Romania (with Ceaușescu as its leader, of course) is capable of. Period.

No one questioned Ceaușescu. No one cared that this road is basically useless, because other roads are already there to connect the regions that Transfăgărășan Highway would connect. It was built as a status symbol.

Still, it became a popular tourist attraction since then. With all the locals and tourists driving it just because it’s a pretty drive, we definitely couldn’t say it’s useless. It’s beautiful. Hah, life and its unpredictability. 🙂 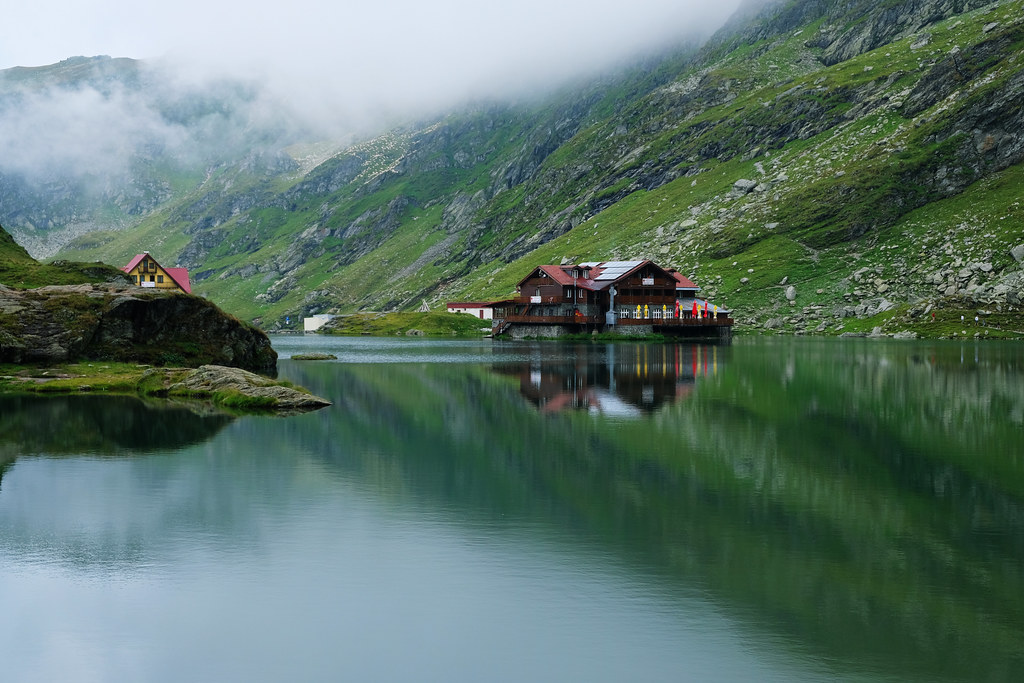 This drive offers spectacular views of the Făgăraș Mountains all the way. Dramatic peaks towered above us. Countless waterfalls were cascading down into the steep valleys. But our favorite stop was Lake Bâlea.

Lake Bâlea is a picturesque alpine lake surrounded by impressive grey peaks of the Făgăraș Mountains. Its average depth is about 11 meters. The only large parking lot along the Transfăgărășan Highway is located here. (It’s not free though.) The lake itself is right there by the parking lot, and we definitely recommend taking a walk on the lakeshore. 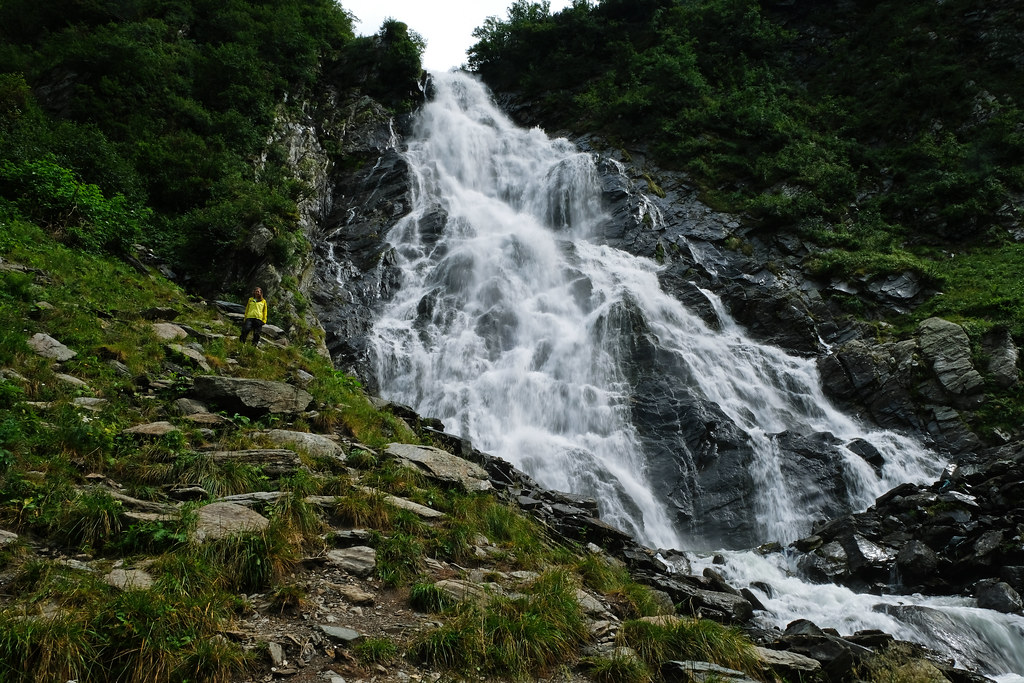 The other stop we liked very much was the short hike to 60 metres tall Bâlea Waterfall. This lovely waterfall can’t be seen very well from the road, but there’s a short, slippery trail that leads to the bottom of it. The trailhead is at the cable car station at Bâlea Cascadă chalet. It took us about an hour to get there, and the trail was very nice, running along a clear mountain stream all the way.

The reason we can’t name other favorite stops is that they don’t have a name. We were happy if there was some kind of pullout where we could stop. Because it was worth stopping quite frequently. For waterfall views. Lake views. Oh, and for bears. (A side note: we did not get out of the car when we bumped into a bear. A mummy bear as it turned out. With her two cubs.)

Hiking in the Făgăraș Mountains 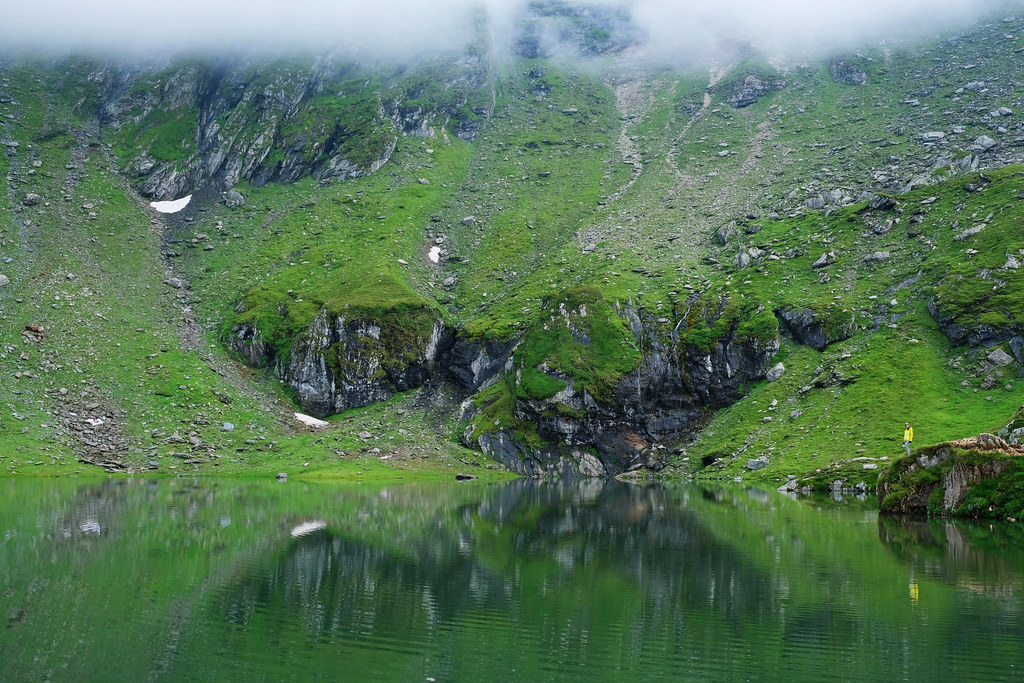 So we spent one day sightseeing in Sibiu and then driving the Transfăgărășan Highway all the way. We planned to return the next day to do some hiking in the Făgăraș Mountains.

Făgăraș Mountains are wild and unspoilt, and they offer challenging trails. They are definitely not for the casual walker, and we were excited to conquer some of its peaks, like Buteanu (2507 m) or Negoiu (2535 m, the second highest peak in Romania).

Now there’s another fact you better consider when planning to hike in the Făgăraș Mountains. The weather there is unpredictable, probably only one thing is for sure: it’s very rainy (or snowy) year-round.

How not to conquer the peaks of Făgăraș 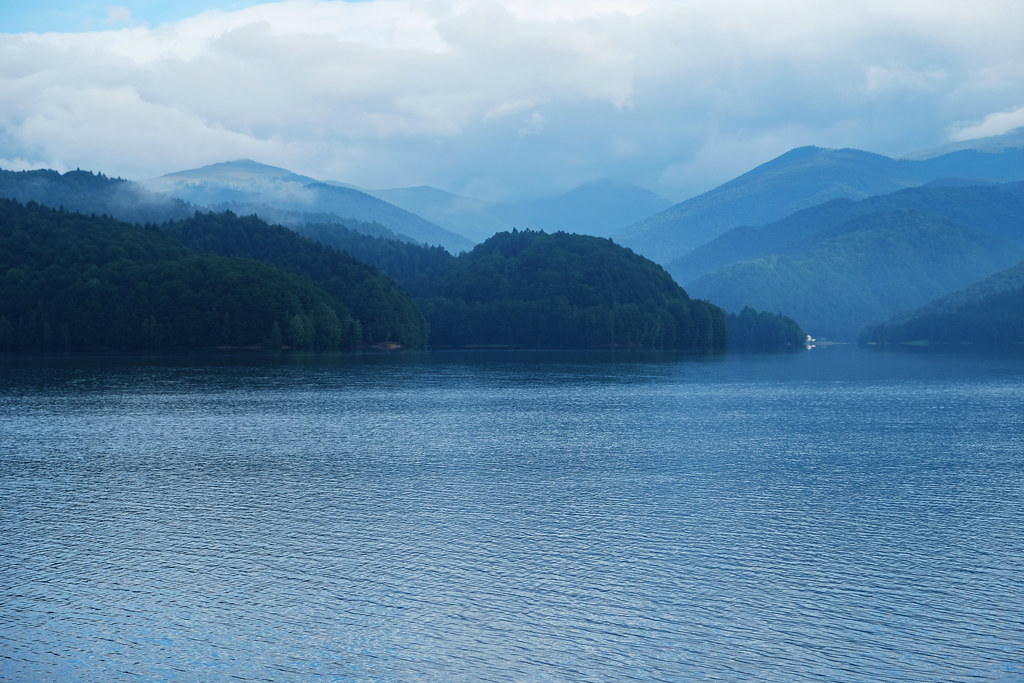 On that summer day when we arrived to a pullout near Lake Bâlea to start our hike, we got the worst weather we’ve ever experienced in the high mountains in Europe. It was raining, of course. It was cold, too – about 2°C in the middle of July. The wind was strong. But the worst was the fog. It was so dense that we couldn’t even see our car when being more than 2 metres away from it.

We decided to get back into our car and wait. At least the fog should clear up a bit, otherwise there’s no point going anywhere, least to a mountain peak. An hour passed. Nothing changed. We decided to drive to Lake Bâlea, probably we could walk around it a bit. Well, we were standing on the lakeshore and didn’t see the lake. No, the fog was not about to clear up.

We let go of our plans about conquering any peak that day. You can’t fight against a mountain, that we know quite well. We drove to a lower elevation to see if it’s any better there. It seemed to be, it was less foggy. We found a forest trail on our hiking map. Then in the moment we parked at the trailhead, it started pouring like hell. We took it as a sign. A last warning. Go away. We said goodbye to the Făgăraș Mountains. 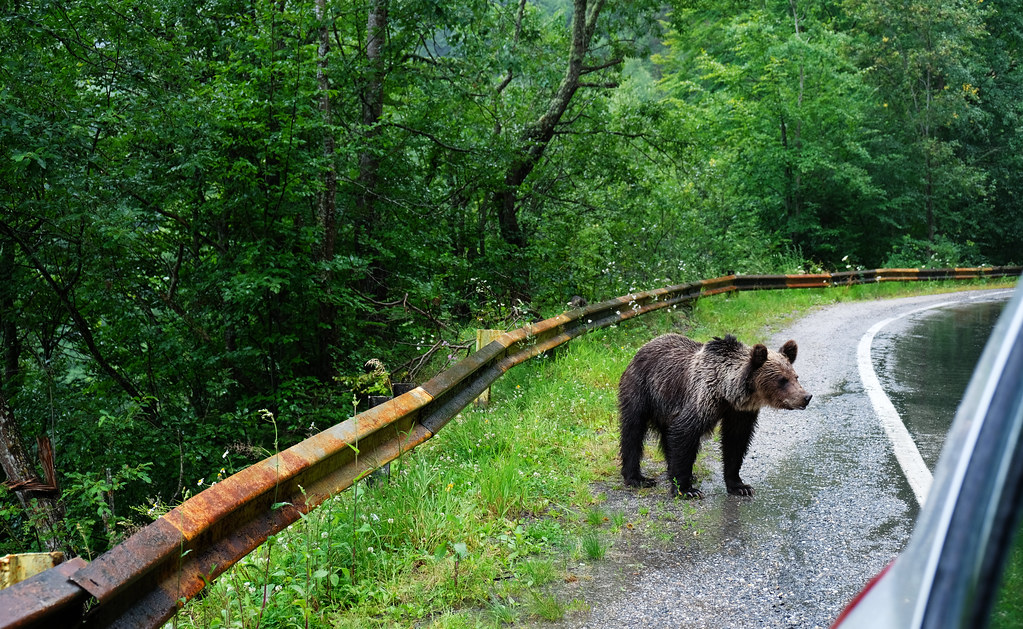 There are a lot of bears living in the Carpathians, including Făgăraș Mountains. Now, we’ve hiked in bear territory before. We know the general rules: make noise to let your presence known, don’t hike alone, don’t hike at dawn and dusk (when bears are the most active), don’t ever turn your back on the bear and don’t run. These rules are true whenever you hike in bear territory.

Wild animals will avoid contact with humans if they’re given the chance. However, the situation in Romania’s densely populated mountains can be a bit different. Some bears got used to the presence of humans. They steal food from trash cans regularly. These bears pose the greatest threat to you. So if you see a bear in or near a village, it’s best to go inside. Also, avoid walking around in mountain villages at night. 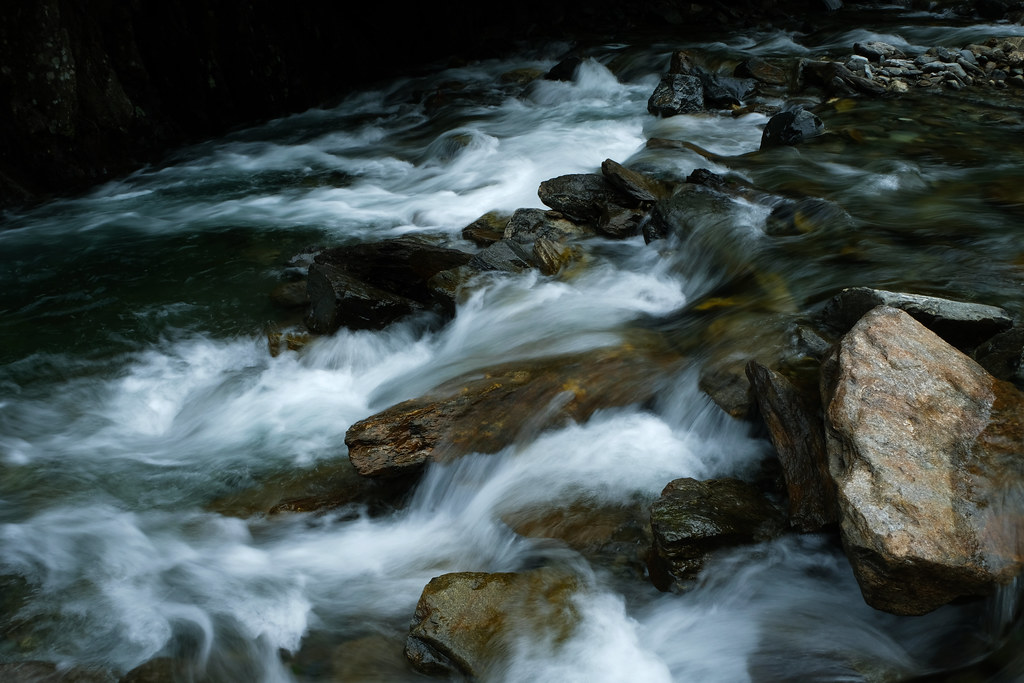 Be especially careful with mummy bears and their cubs. Females are very protective of their cubs. Our only bear encounter in Romania was a mummy with its two cubs while we were driving the Transfăgărășan Highway. They were right by the road, and we stayed inside our car.

For more bear safety tips specifically for Romania, read this article, we found it quite useful.

When is Transfăgărășan Highway open? 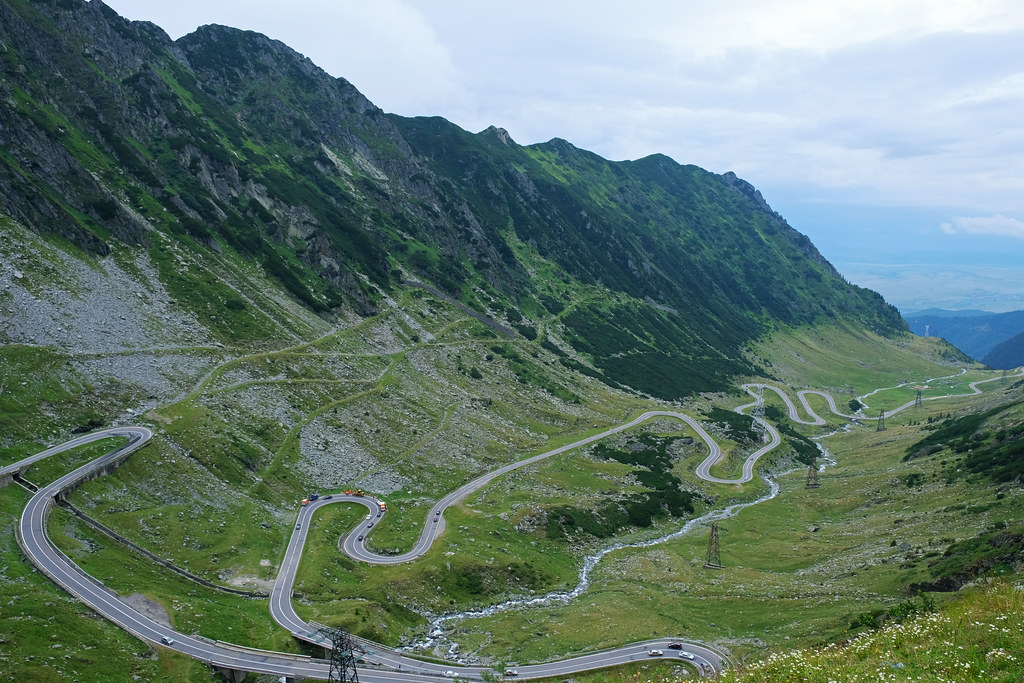 So we’ve already told you about the harsh weather in the Făgăraș Mountains. Transfăgărășan Highway usually opens only in the summer, June or July. But always check the latest news, it really depends on weather conditions. It may remain open until as late as November. However, if the weather is so terrible, it may close even in the summer.

It’s a whimsical place. Beautiful, too. We can’t help dreaming about it. We’ll return.

Have you ever been to Romania? Any scenic drive through the Carpathians that you’d recommend?