When we’ve visited New York State for the first time there were two obvious things on our list: New York City and Niagara Falls. Since renting a car in New York and driving to Niagara Falls is so much cheaper than flying there, we decided to go with the rental car option. We thought we could probably stop at some nice places to rest during that 7-8 hours drive… 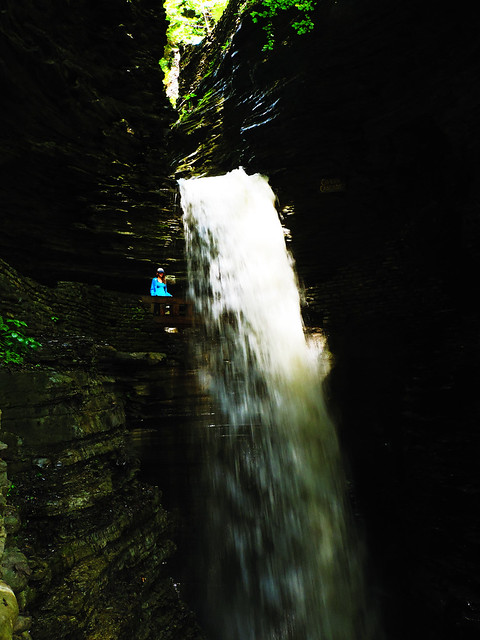 That’s how our New York road trip has started. We’ve stopped not only for a couple of hours, but alltogether for 2 days on our way from NYC to Niagara. Because we realized that there are actually a whole lot of places where we would happily stop for a short hike. So we did.

These small state parks with their charming waterfalls are not so well-known as Niagara Falls, but we enjoyed our time there just as much as at Niagara. Of course, we can’t compare them with Niagara, but that’s because they are so different. Niagara is world famous and mighty and stunning, but on the other hand it’s also busy and you have your (high) expectations. 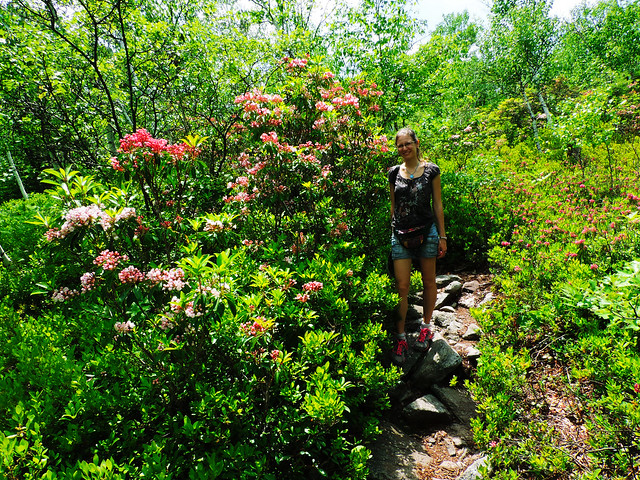 I’m not saying it hasn’t met our expectations, because it has, but the bad thing about expectations is that you feel ‘just normal’ if they are met. We tried not to have expectations towards our Niagara visit, but it’s just not working like that – especially when it’s about a place you dream about since your childhood and it looks so far away and perfect what is not even real.

On the contrary, we haven’t had any expectations towards the hidden state parks in the heart of New York State. They surprised us with their serenity and unexpected charm. 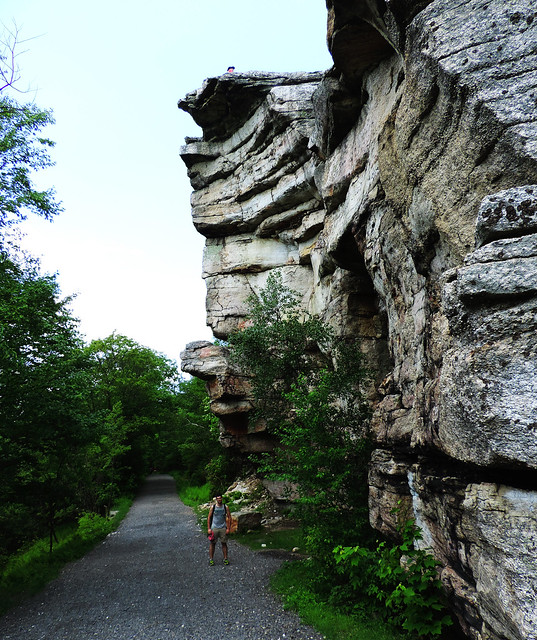 Our first stop was Minnewaska State Park. We’ve spent half day in the west side of the park which is called Sam’s Point Preserve. We hiked the Verkeerder Kill Falls Trail and it was especially beautiful in early July as pink flowers bloomed everywhere.

The beginning of the trail has views of the nearby hills and it features some interesting rock formations. We had to cross a small stream to reach the 180 feet (54.6 m) high Verkeerder Kill Falls. 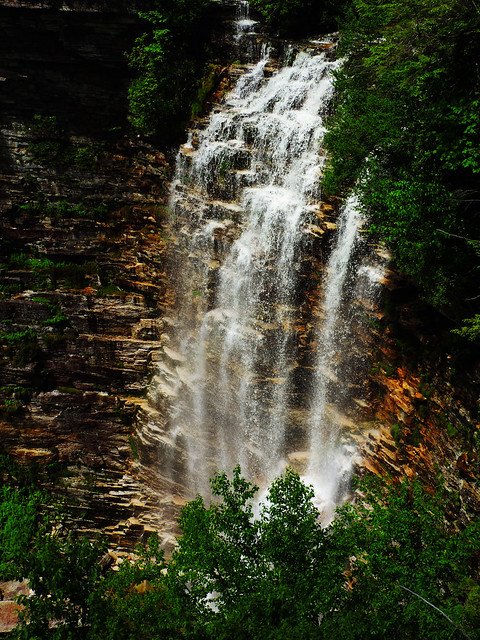 On our way back to the parking lot, we took two short detours at the junction. The first one to peaceful Lake Manzanita where we had some rest while cooling down our feet in the lake and the second one to the Ice Caves. Since we visited in June we found no ice there, just dripping water and the caves.

Verkeerder Kill Falls is a 8.4 mile out and back hike and roughly 6 hours was perfectly enough for us to do it at a very convenient pace even with the detours and rest stops. Then we headed to our accommodation in the Finger Lakes area. 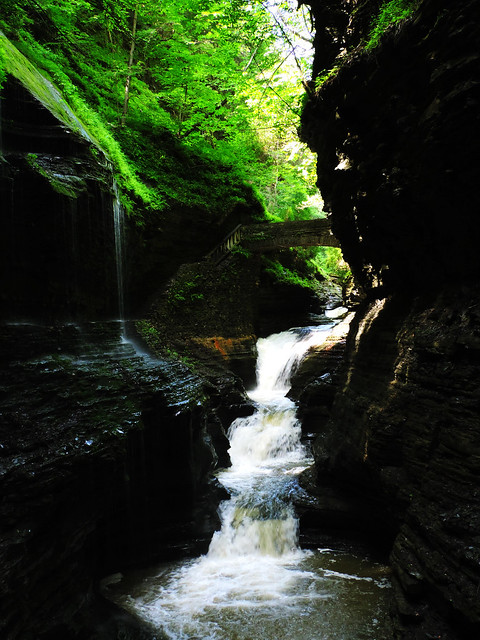 The Finger Lakes are a group of eleven long, narrow lakes and no wonder, there’s countless outdoor opportunities in this beautiful region. We stayed in a hostel in the small town of Bath and we spent our second day exploring the Finger Lakes region – well, a tiny part of it.

We started the day quite early in Watkins Glen State Park. Watkins Glen is maybe an exception in this list of hidden gems, because it’s very popular. Okay, not world famous, but popular enough that you better go early and on a workday to be able to enjoy it in peace and quiet. 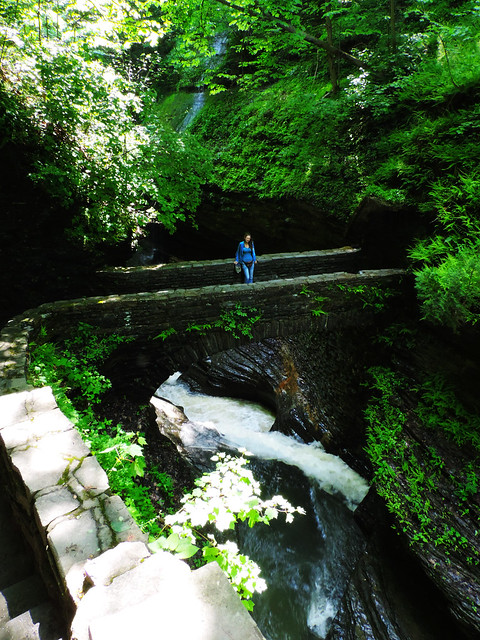 But the series of 19 charming waterfalls in the glen was definitely worth for us to get up early! The main attraction of the park is the Gorge Trail. It’s an easy and short hike (3 miles roundtrip) and it has all the waterfalls. These waterfalls are not huge, but they are so pretty and there’s so many of them that you feel yourself in fairyland.

As you may guess by now, Watkins Glen was our favorite state park in New York. 🙂 In case you are already sick of waterfalls, it’s time to say goodbye to us now as we will go on with all the lovely ones we discovered in each of these parks. 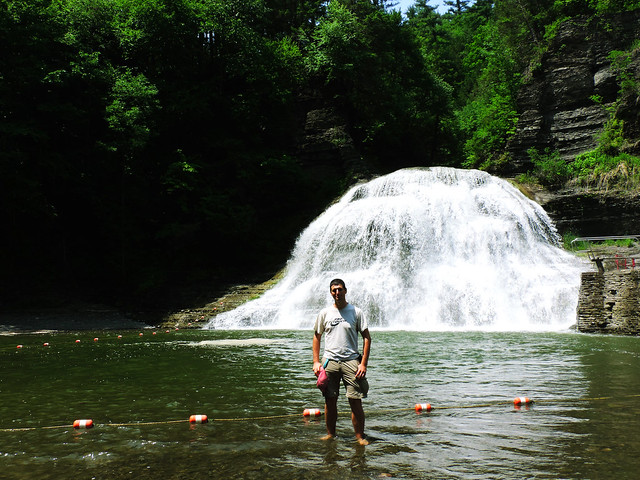 Still with us? Then you would probably be excited about the next park: Robert H. Treman. From Watkins Glen we headed to Taughannock Falls State Park for another half day hike, but we stopped at Robert H. Treman State Park on the way there. We didn’t hike in this park, still we had a good reason to stop: another nice waterfall, Lower Falls right at the entrance.

You can even swim in the pool at Lower Falls in the summer, though it was still very cold at the time of our visit (early June). If you have a bit more time then there’s another waterfall and several short trails to explore in this park. 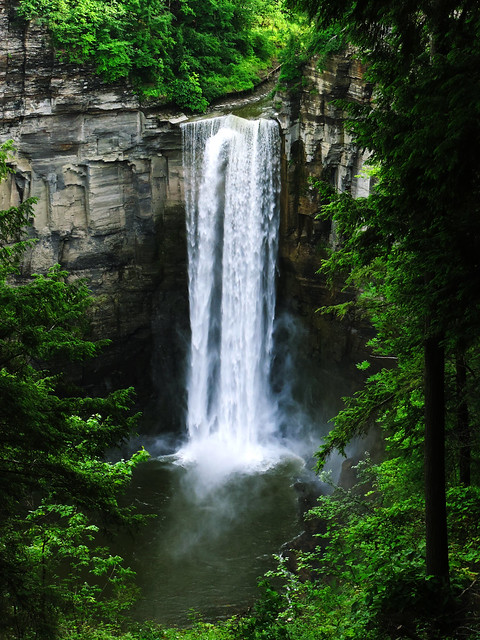 We finished our day in Taughannock Falls State Park. Again, this park has waterfalls as well, 3 very pretty ones. Though they are all accessible directly by car, it’s worth taking the lovely loop on South and North Rim trails if you have time. It’s only 3 miles and not really difficult, it took us maybe 2,5 hours.

We parked at Cayuga Lake at the north entrance of the park and the lakeshore itself is a nice place for a picnic or for a walk, too. 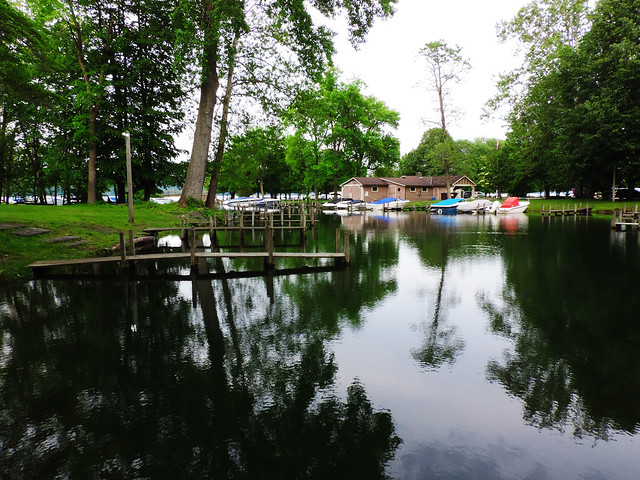 Have I said that we finished our day in this park? Actually, we finished only the hiking part, but not the driving. It was about another 2,5 hours later that we got into bed in our room close to Niagara Falls. Then came another two fantastic days, but it’s another story…Of course, you can read it: here! 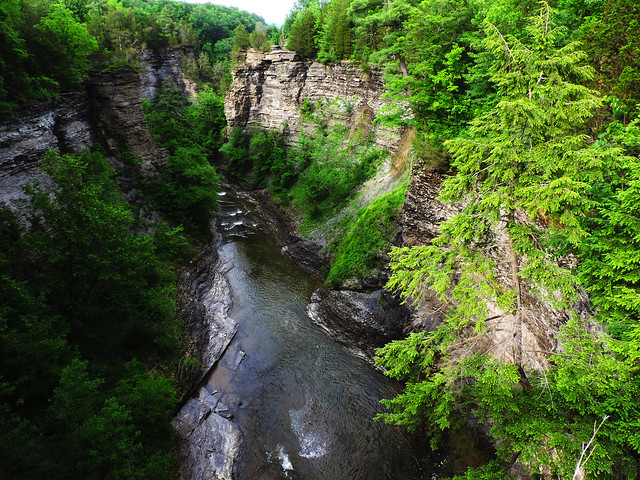 If you have more time than that 2 days what we had, you could not only hike more in the above mentioned parks, but also visit several others. So here are some from the Finger Lakes Area:

Last but not least: Letchworth State Park which is a short detour on the way to Niagara Falls from the Finger Lakes region. This is the one we are most sorry we missed. But we are sure we will return to this area someday.

Have you been to any of these parks? What is your favorite lesser known park?