It’s easy, isn’t it? Of course, it’s a sandy beach. Except, you’ll realize within a few hours on the beach that sand will get into everywhere – and when I say it, I mean it. Especially if you have a little crawler who drools a lot. His hands and half of his face are constantly wet. He puts his hands into his mouth quite often, because that’s what he does anywhere, anyway. Sand sticks to wet surfaces so easily. The result? He’ll eat sand. You can’t prevent it.

You can try. You put him on a towel. But the towel gets sandy, because everything gets sandy on a sandy beach. Or he crawls away, into the sand. Then back to the towel, so it gets some more sand. But you know what’s good in sand? It’s tiny-tiny. It won’t get stuck in his throat. Unlike pebbles. 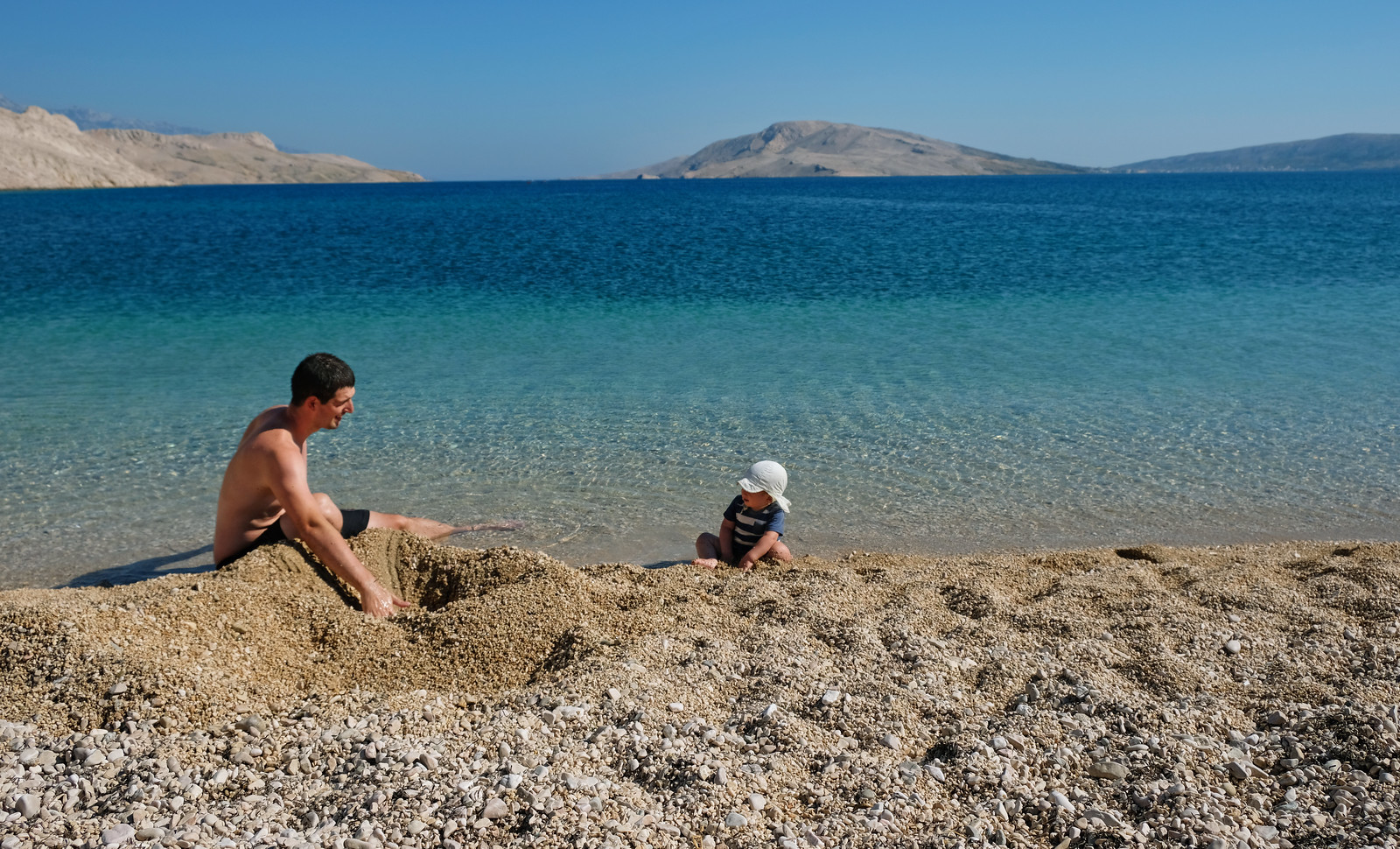 Because your adventurous little crawler tries to put everything he can reach into his mouth, including pebbles. Good luck with preventing him reaching the pebbles on a pebbly beach. It’s a full-time activity someone should do: following his every move and taking each and every pebble that he tries to eat out of his hands.

Are rocky beaches better? Rocks are too large to swallow, fortunately. Unfortunately, they’re sharp, too. Most often you can’t even walk barefoot on a rocky beach, because it hurts. Crawling on the rocks must hurt, too. Still your little one wants to take pride in doing that one thing he just learned to do, and you can’t stop him. You can only pick him up and take him to a…??? Sandy beach?

Okay, all depends on your baby’s age 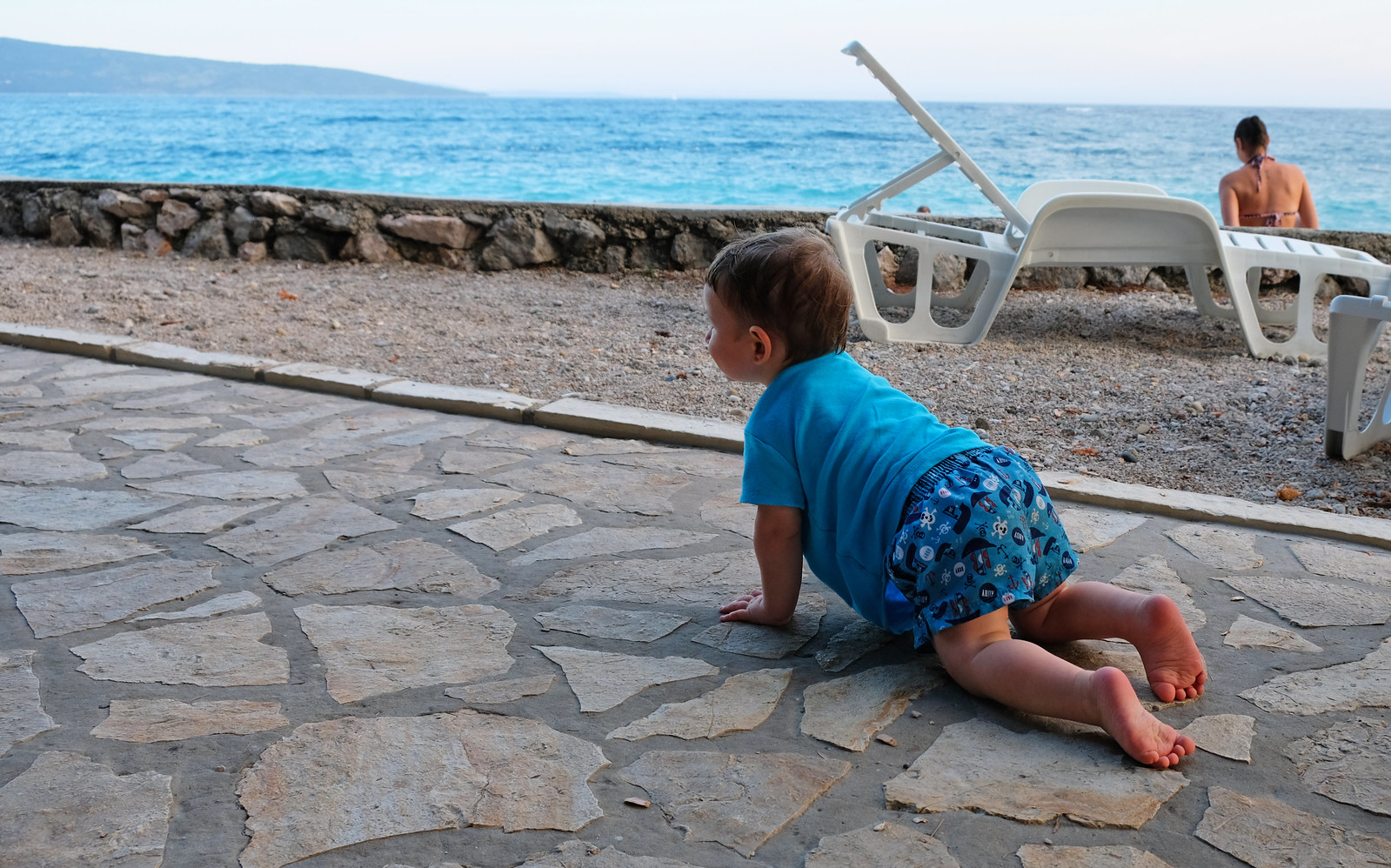 The above funny experiences are ours from several trips we had with Tomi in his first year. But to give you a better overview, it’s important to specify his age. Because 3 months old babies will likely do nothing on the beach – sandy, pebbly, rocky or whatever – but sleep in their carrycot or stroller. Since Tomi was born at the end of summer, the next time we went to the beach with him was just a few months before his first birthday.

He was barely 10 months old when he wanted to eat all the pebbles on the beaches of Lake Bohinj in Slovenia. It was tiring that one of us constantly had to watch him – and I mean it, don’t even think of taking a quick glance of the views around you. 😛 But only 2 months later, we didn’t have any problem with him on the pebbly beaches of Croatia. He must have figured it out by then that pebbles are not to be eaten, I guess, and he rarely even tried to put them into his mouth. He liked playing with them very much, though – and he still does, getting close to his second birthday. 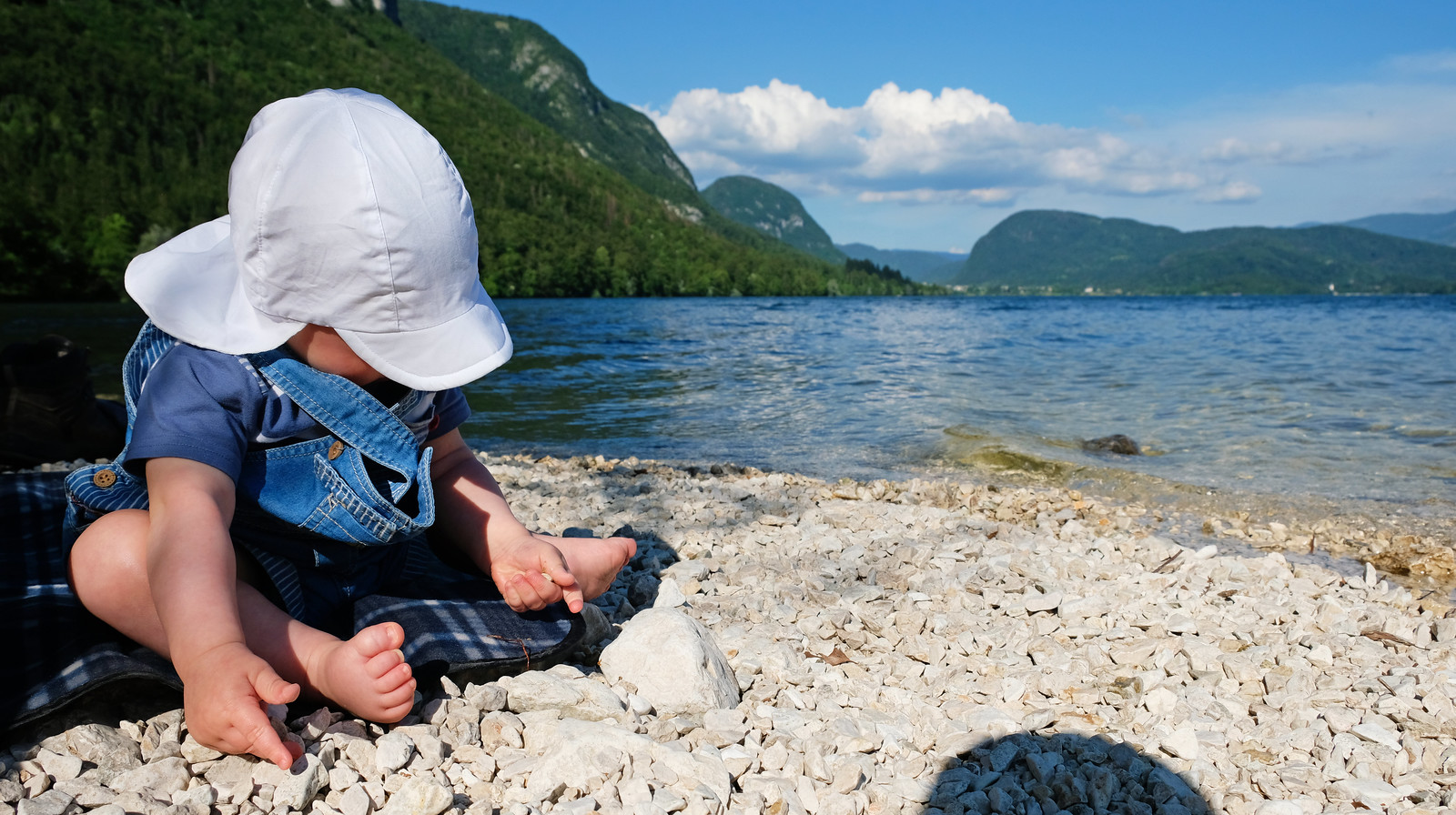 Being 9-12 months old, he was an energetic crawler, and even rough, uneven surfaces couldn’t stop him trying to crawl. Putting down a blanket worked for a while, but quickly he found it too small. He needed space, so the best places in nature for us that time were grassy meadows, smooth rocky surfaces and sandy beaches. However, we had to live with the fact that we couldn’t prevent him eating some sand.

He learned to walk barely before he turned one year old, and that was the time when we visited some of the sandy beaches in Croatia. They’re great for a baby who is experimenting with walking! Sand is soft and smooth, and well, isn’t it one of the best feelings in the world to walk barefoot on a sandy beach? I certainly like that (though sandy beaches are not our favorites in Croatia). Tomi did, too, but he still spent a lot of time sitting or crawling, and yes, his hands were always sandy, because they were always wet. And yes, he touched his face and mouth often, and you know… some sand ended up in his mouth. Just let it go, as a famous princess once said, that’s our opinion. (Plus, from all the things he tried putting in his mouth since he was born, sand on a beach was the least harmful, anyway.) 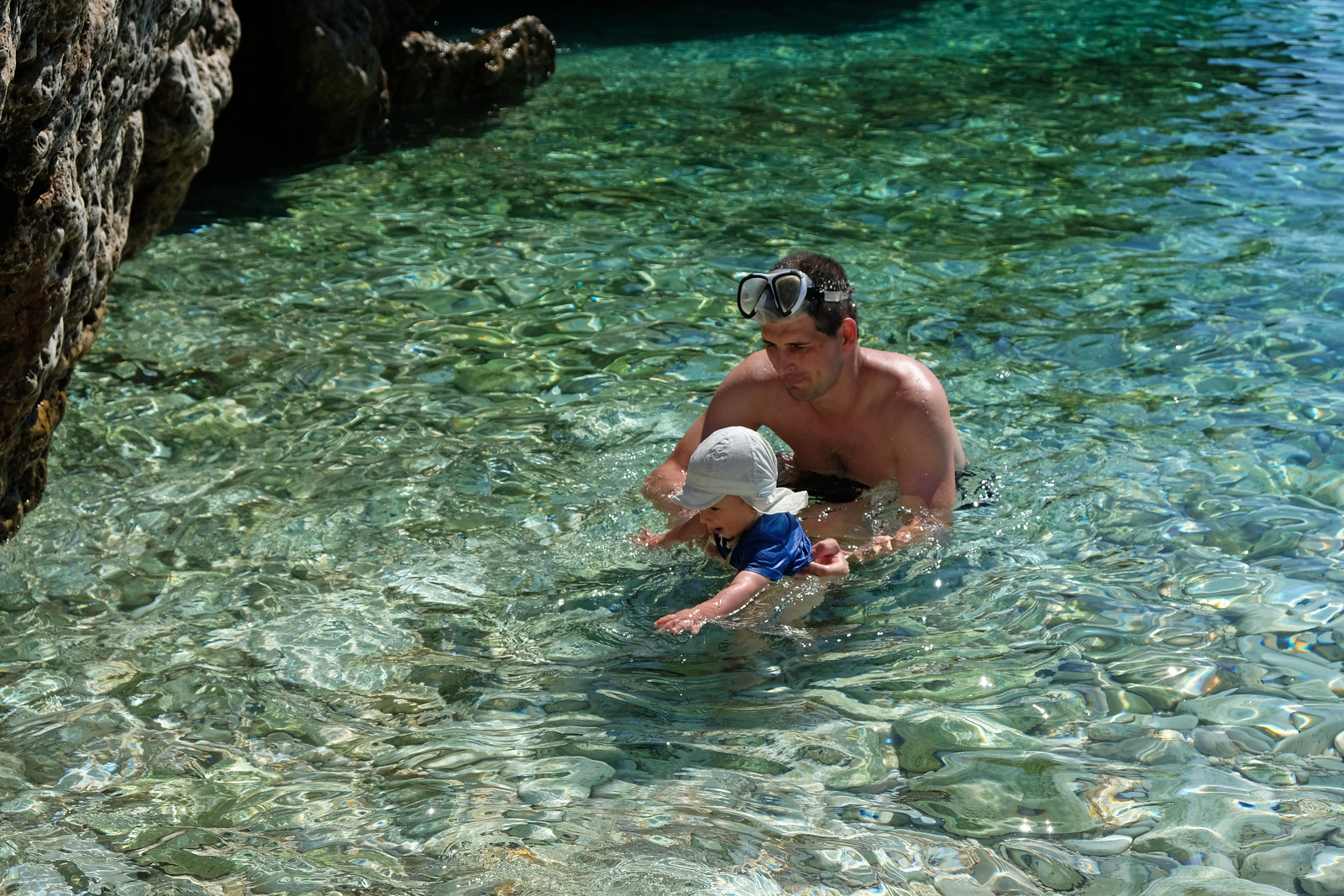 Now, we don’t say every baby will do (or won’t do) these things at the specified age, of course. We just wanted to emphasize that what is suitable at 10 months might not be at 12 months, or the reverse. Babies grow so fast and learn so many things in their first year that you constantly need to adapt to them. Just like you change the environment where you live so that it’ll be safe for them, you change your choices about which beaches to choose so that everyone can have some fun.

Half a year later 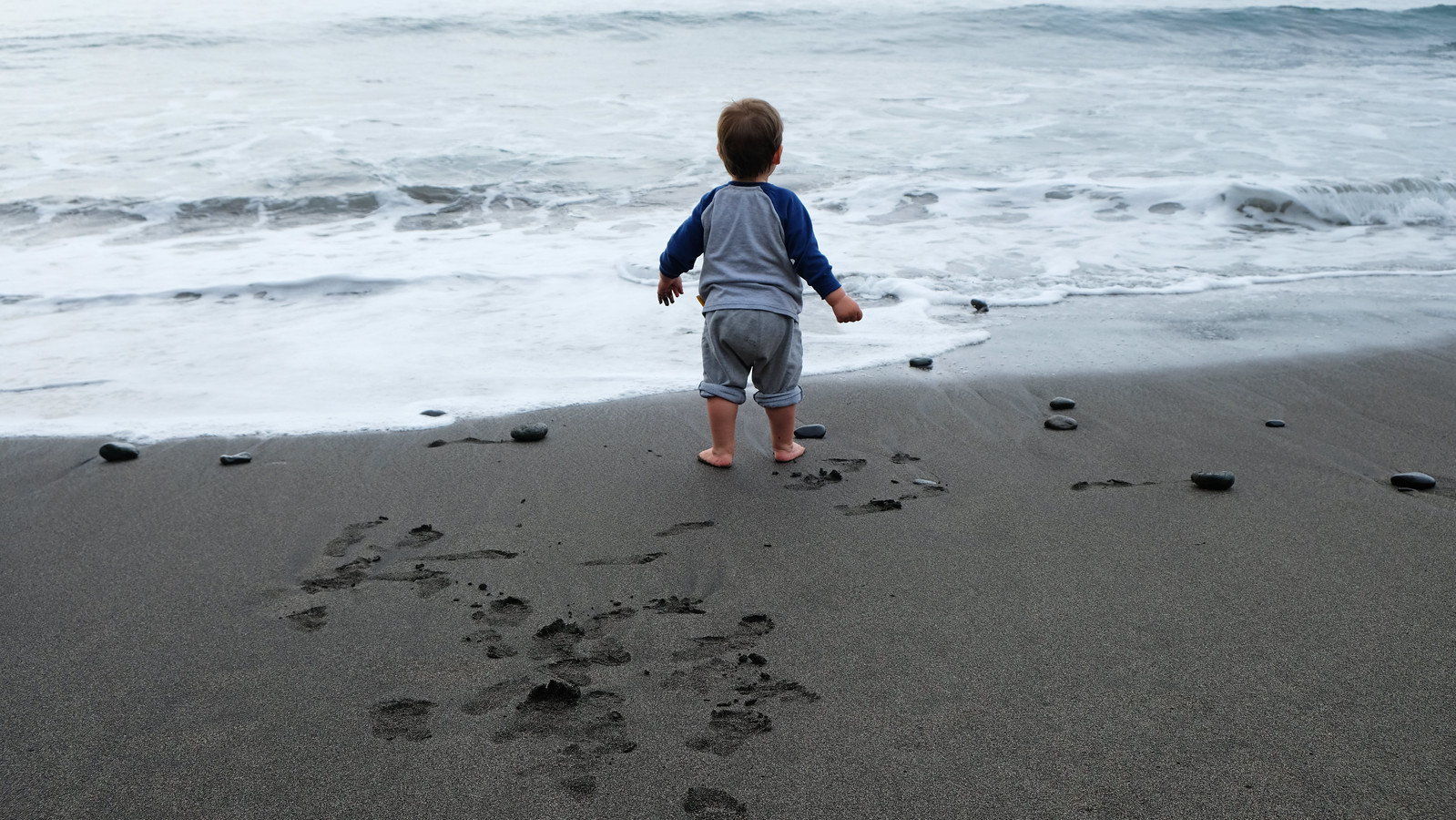 Fast forward a bit more than half a year. We had a three weeks long trip in Tenerife when Tomi was 20 months old. We went to every kind of beach there, and our conclusion was: any type of beach can be great for a toddler! On a sandy beach, he plays in the sand, on a pebbly beach he throws the pebbles into the water, on a rocky beach he plays in the shallow, warm tide pools. He still needs to be supervised closely, especially on an ocean beach where waves can be big and strong, but spending time with him on beaches gives joy to the whole family.

Nap time on the beach

Daytime naps are important even on a beach day, both for a baby and a toddler. A tired baby is one that’s very-very hard to handle, and unfortunately, they won’t just go have a nap on the beach if they’re too exhausted – unlike their daddy. 😀 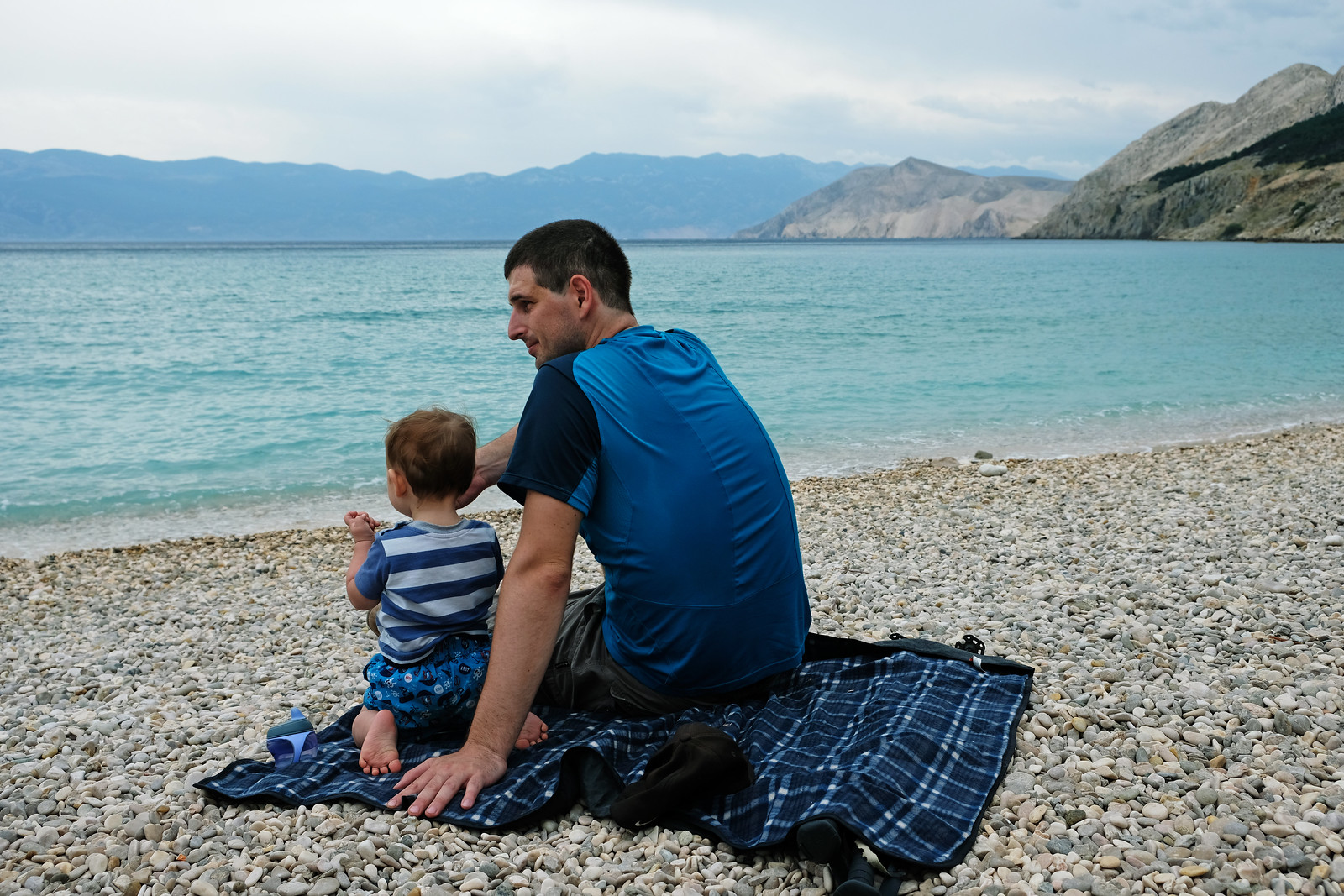 But sleeping is a giant topic to discuss, and I’m sure every parent figures out the ways that work best for them (sooner or later…). It was not easy for us, and it took more than 1.5 years for Tomi to sleep through the night, however, daytime naps were usually easier. The beach was no different, and we had not only one, but three ways to ensure a long enough nap for Tomi. And three is a good number, because not all three worked on any chosen day, hah.

Either we slept the same way as at home: me lying down next to him and breastfeeding until he fell asleep – but instead of the bed, we used the beach tent and towels. However, this didn’t work if we were by the sea, and I went in for a swim previously. Even if I dried myself with a towel, my body must have felt salty, because Tomi rejected breastfeeding (something that he’s never done otherwise).

So our second option was to put him into the carrier and walk with him up and down the beach. And walk, and walk, and walk… Until he slept enough. Understandably, this was our least preferred thing to do. We rather tried to plan our days in a way that we’ll be in the car for 30-40 minutes when nap time comes. Like going from one beach to another during Tomi’s nap. Of course, there was no guarantee that he’ll fall asleep in the car (and sometimes he didn’t), but then who gives any guarantee for anything, anyway?

But you know your baby and his sleeping routine (and how that sleeping routine changes with the months), so you might find other solutions. Or you don’t even understand why this could be a problem. (Don’t tell us if this is the case. We’d like to believe that it’s equally hard for everyone, not just for us. :P)

No one knows what’s best for you and your family 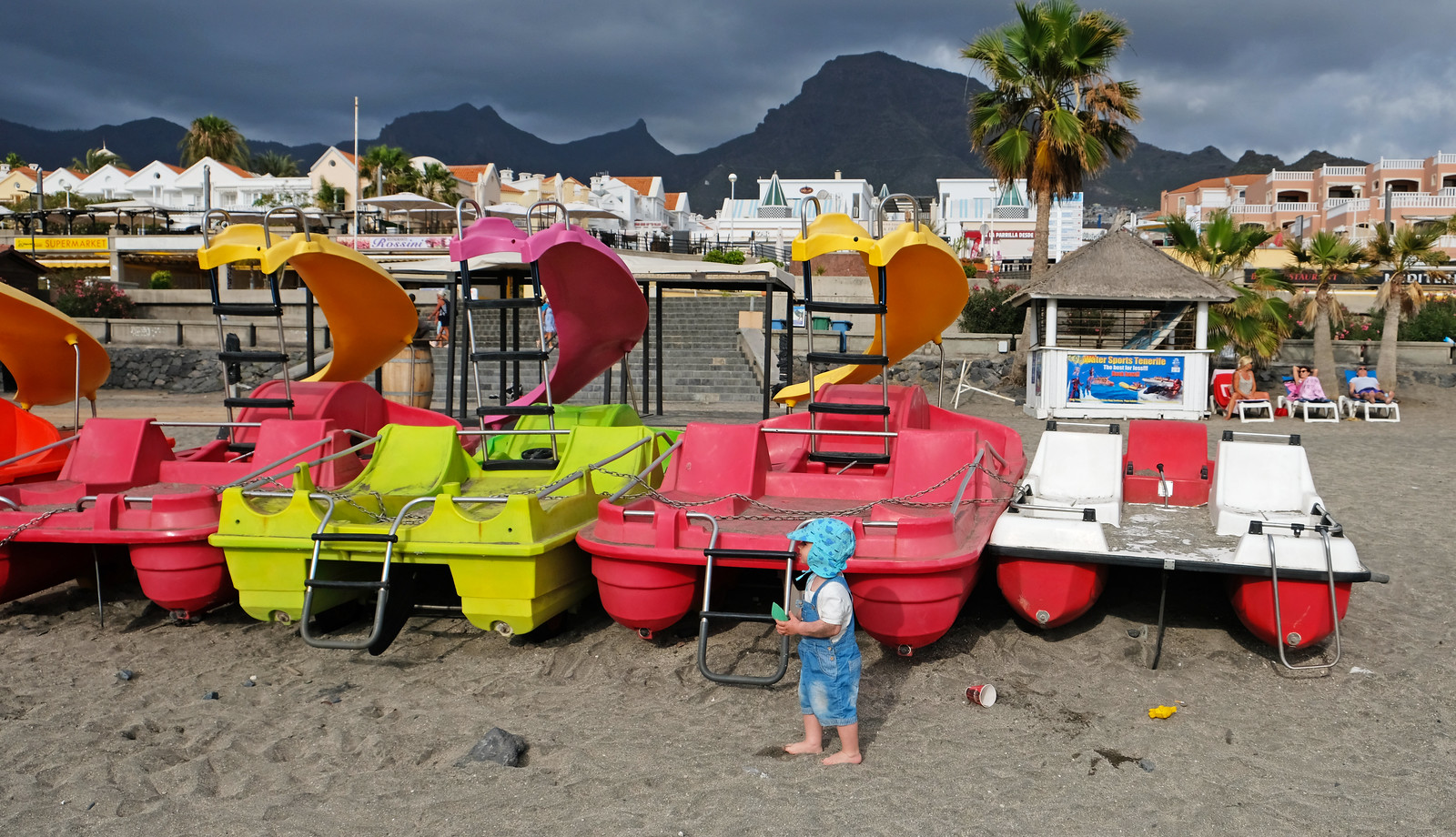 We liked all of our trips with Tomi so far, despite that we faced different challenges each time. We think that challenges are there at home, as well, but travel fills us up and gives us great experiences together – beyond the challenges. But ultimately, it’s only you who can decide what’s best for you. Maybe you don’t even feel like going to the beach? 😀