From deserted volcanic landscapes to lush green coastal mountains and black sand beaches, Tenerife’s richness in natural treasures is truly impressive, especially because it’s such a tiny island that we can drive around it in about 2.5 hours. We spent 3 weeks there and did lots of hikes in different nature parks, still we left countless trails unexplored.

In this post, we show you the diverse beauties of the parks we found along with some ideas where to start exploring them. 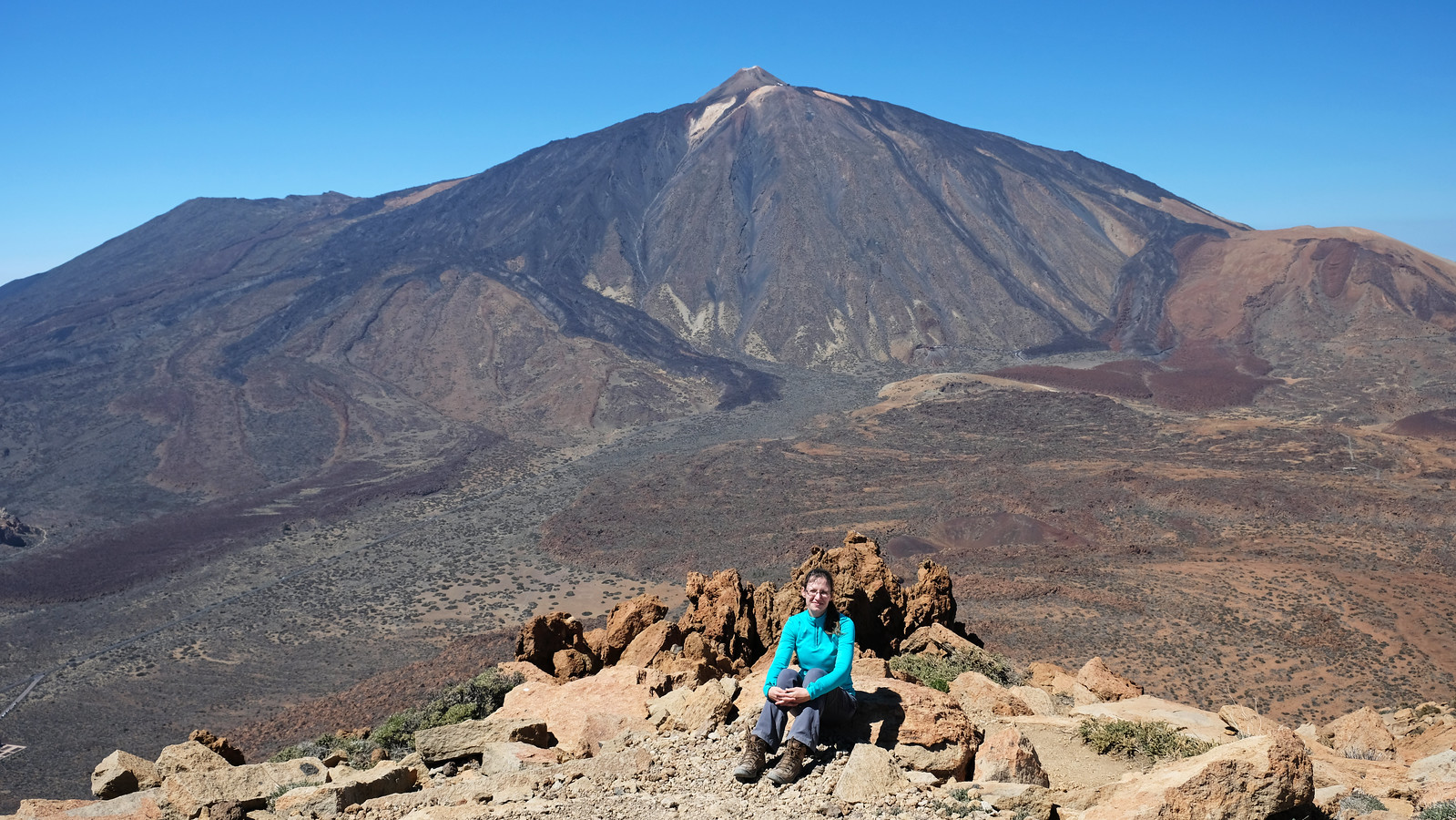 Would you be impressed by a landscape of volcanoes, craters and huge rivers of petrified lava, crowned by a 3715 high sleeping volcano? Not a real question. Teide National Park is on the list of every visitor, and rightly so.

Tenerife is dominated by its giant volcano that can be seen from almost anywhere on the island, and affects Tenerife’s climate, as well. Teide is an active volcano, but it’s so high that magma rarely reaches its summit, eruptions usually occur on its flanks. The most recent one (in 1909) was from the El Chinyero vent.

Teide National Park is the only national park in Tenerife – and the largest and oldest one on the Canary Islands. It can easily be visited as a rich network of roads run through the park – convenient, wide, good quality roads with viewpoints, two visitor centers and access points to countless hiking trails.

You can go up almost to Teide’s summit by cable car. Though to hike to the summit from there you need a special permission (and reserve it well in advance, or book a tour for it). We skipped this adventure as it’s not suitable with a 1.5 year old boy, but we enjoyed the scenic drive and several scenic trails in Teide National Park.

The best viewpoints in Teide 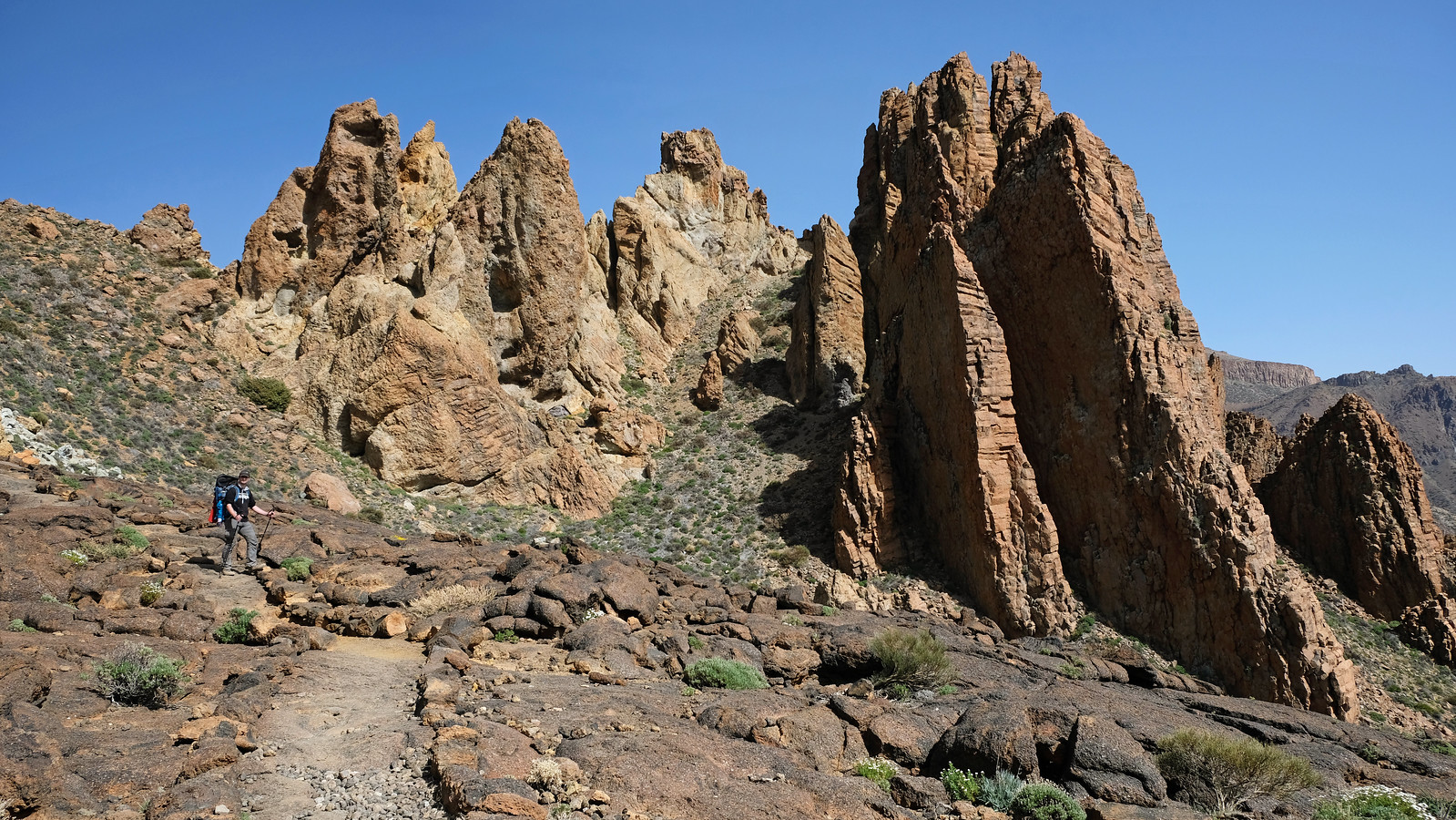 Just drive through the park, and you won’t be able to resist stopping each and every viewpoint you pass by. Some of our favorites that we know by name are:

Where to hike in Teide?

We only did a small fraction of the hikes that Teide offers, mainly the shorter and easier ones which we considered suitable with a toddler. Yet we had no shortage of great, better and EVEN BETTER views!

So the trails we’ve done and loved: 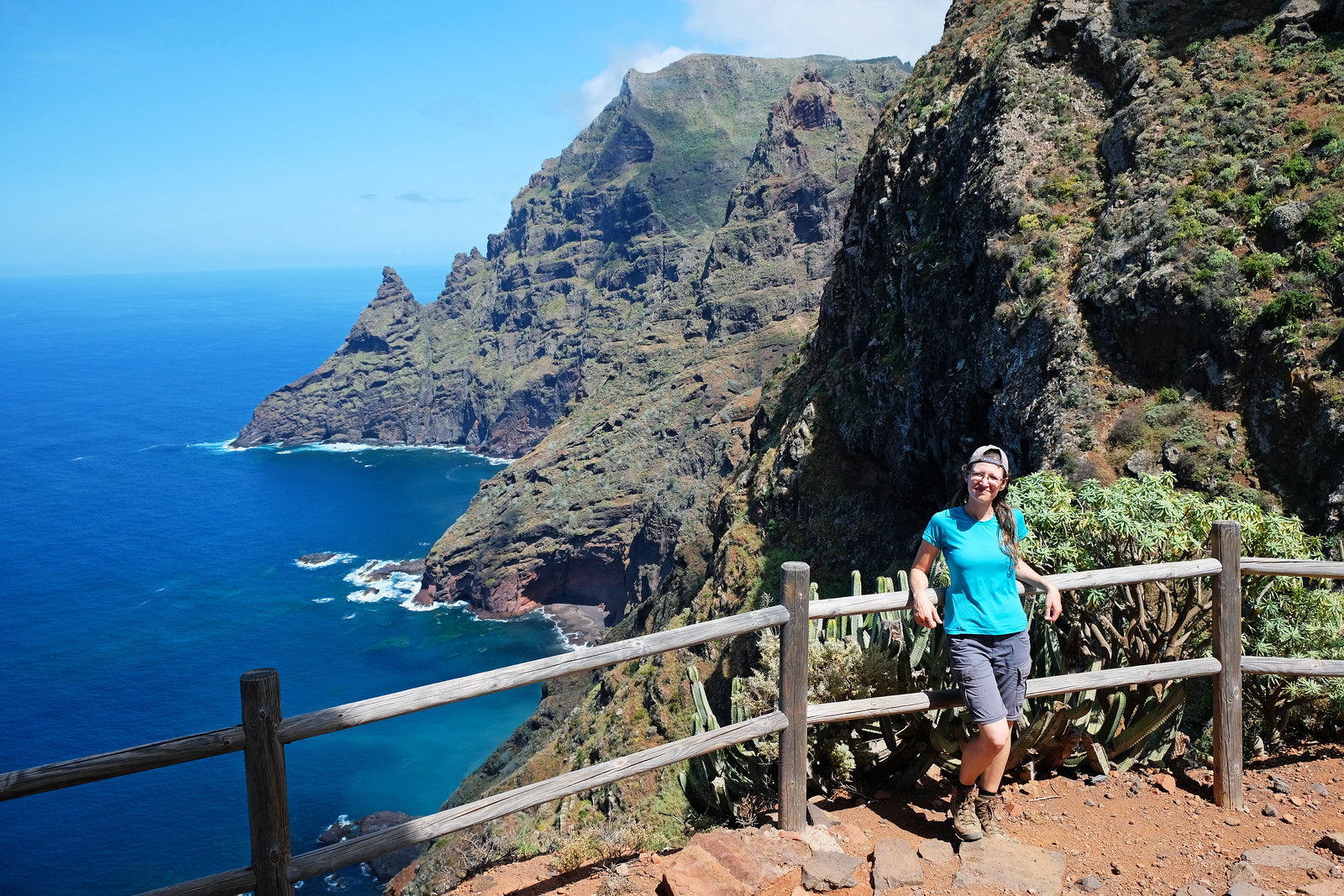 On the northeastern tip of Tenerife lies the highland of mountains with sharp peaks and deep ravines: Anaga Rural Park. We didn’t start the post with it, but if we have to choose only one favorite park in Tenerife, it’s Anaga.

Hiking on the coast, you find wild, remote beaches and wonderful coastal views, hiking towards the inland, you get to the largest laurel forest in Tenerife. It’s the rainiest area on the island, but it’s lush green and quiet, one of the most untouched areas, too.

Anaga is just the opposite of the resorts on the south coast. No hustle and bustle here, just small towns hidden in the mountains, the sounds of the wind and the ocean, and a few people you meet on the trails. Oh, the trails! The coastal trails of this park ended up being among our favorites in the world.

The best viewpoints in Anaga 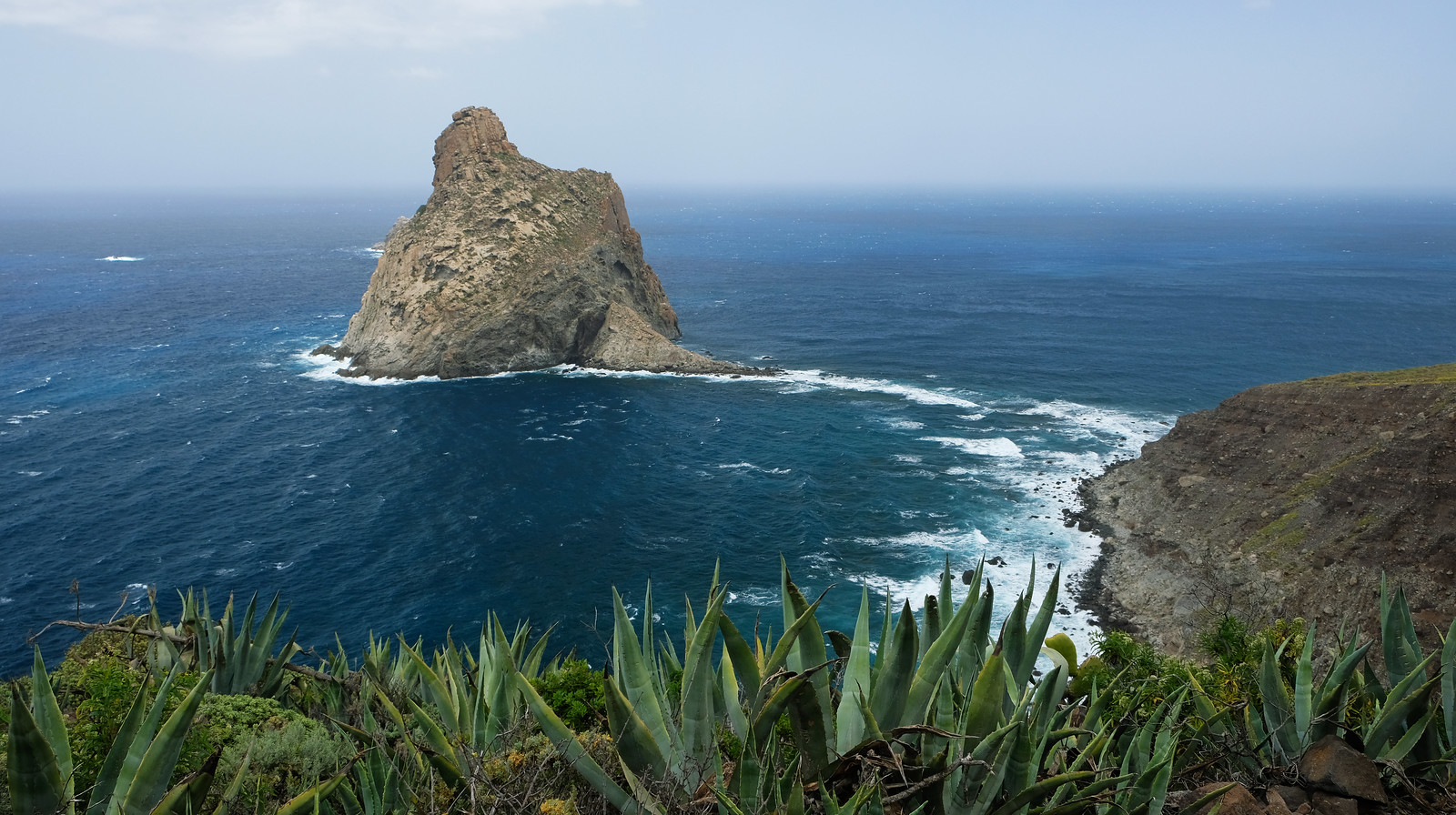 Take any road in the park, it’ll be a scenic drive. And unlike rural mountain roads in lots of places in Europe, the ones in Anaga (and in Tenerife in general) are surprisingly good quality roads, and not too narrow either. Our favorite viewpoints were:

Where to hike in Anaga? 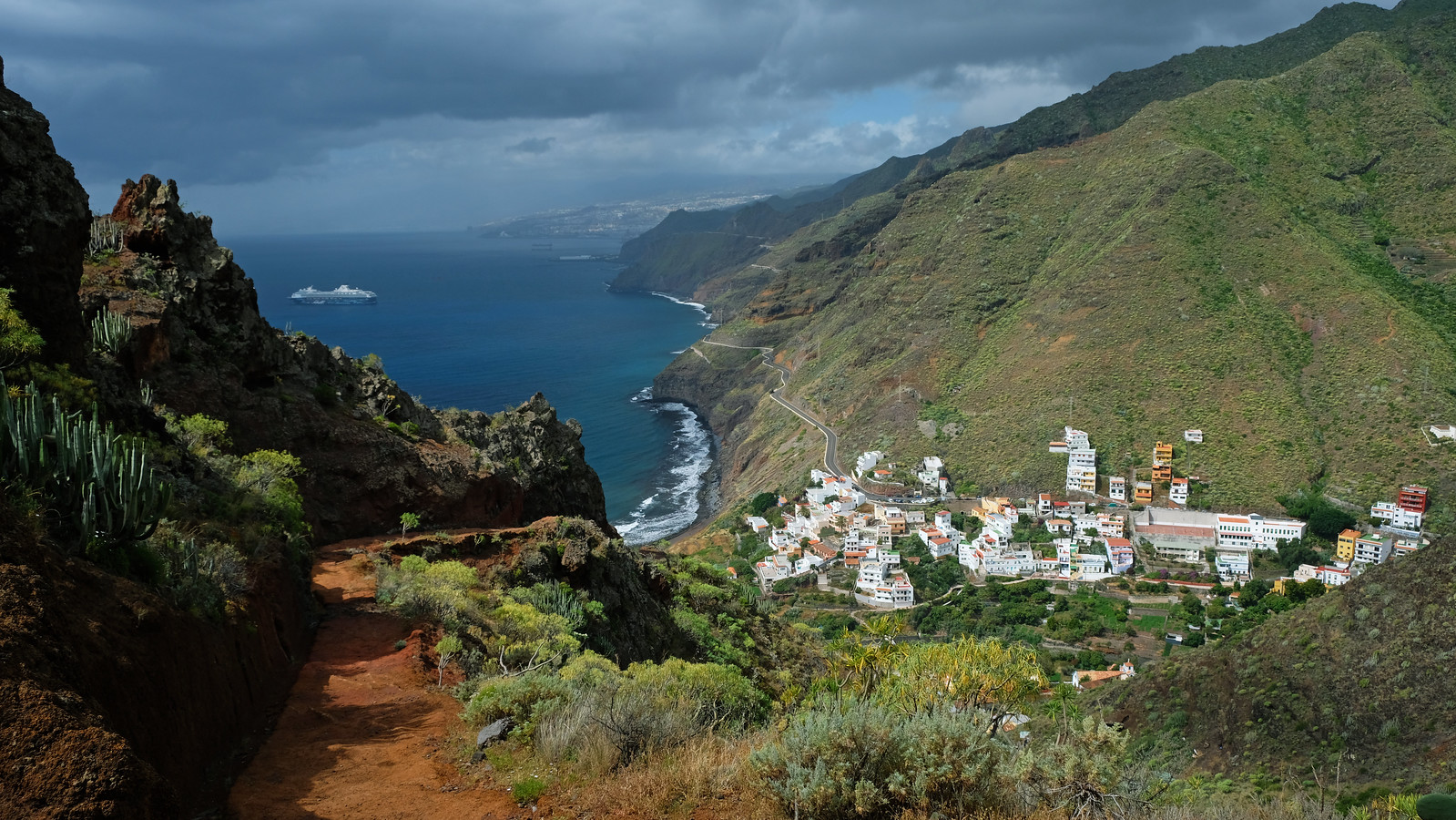 No matter the pretty viewpoints, you have to hike to really appreciate this park. But you can choose anything from short walks to easy, medium or strenuous trails – the point is to know which one is which. 🙂 Even though it’s somewhat relative, we grouped our favorite trails in Anaga based on length and difficulty. There’s no need to talk about beauty, anyway, because all of them are beautiful.

FYI: We did all of these trails, of course. Moreover, we did them with our 1.5 years old Tomi, though we wouldn’t say each one is family-friendly. 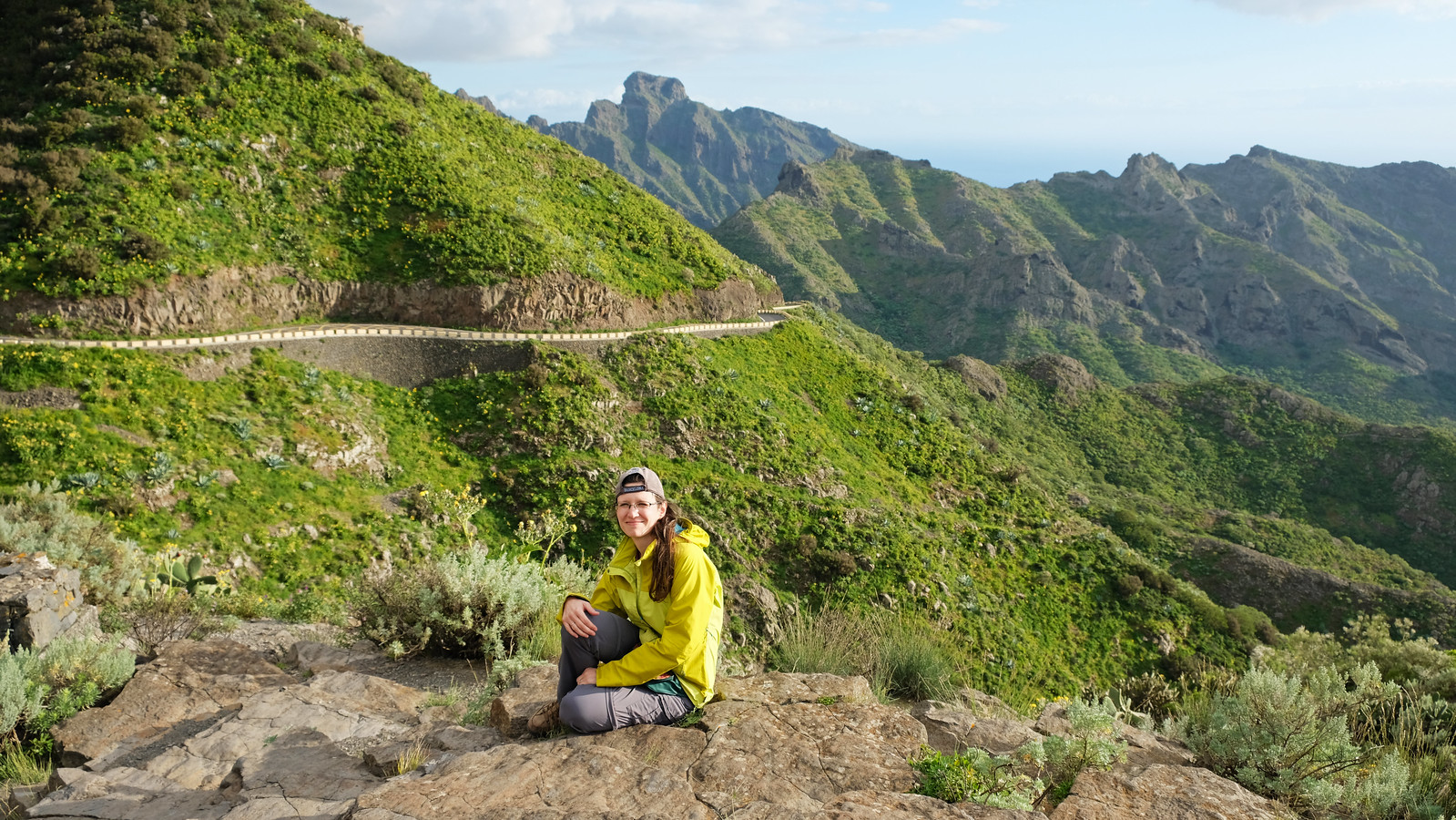 Teno is a bit like the brother of Anaga, on the opposite side of the island, in the southwest. It’s a mountainous region with vertical rock walls and deep ravines, with laurel forests, hardly accessible beaches and lots of greenery. Despite its small size, the mountains of Teno Rural Park rise above 1300 metres.

One of its traditional villages, Masca is the most special on the whole island: it’s built between towering rock walls. There starts the famous trail through Masca Gorge that has just been reopened in 2021 after a long time (and what we haven’t done, because kids under 8 years are not allowed due to safety reasons).

We found several other, incredibly pretty trails though, and enjoyed the views, the rich vegetation, and also the natural pools on the coast.

The best viewpoints in Teno 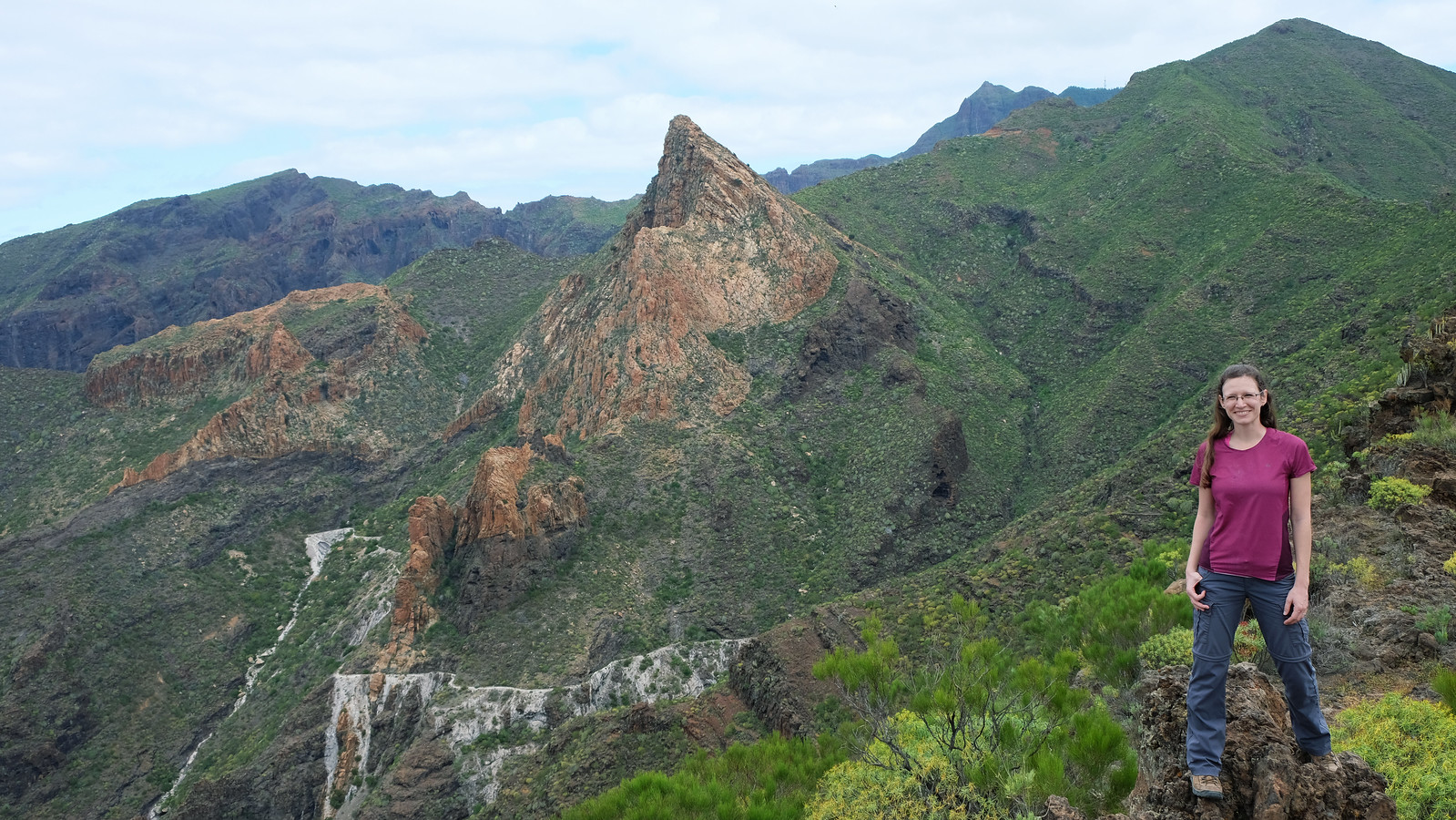 Teno has a main road: TF-82, and while it offers some nice views, it’s worth taking TF-436 for jaw-dropping views. It’s a winding minor road, sometimes a bit narrow, but good quality all the way. Our favorite viewpoints in Teno are all along it:

Where to hike in Teno?

Masca Gorge is extremely popular, but we can’t tell about it from our own experience. Instead we can show you the trails that impressed us: 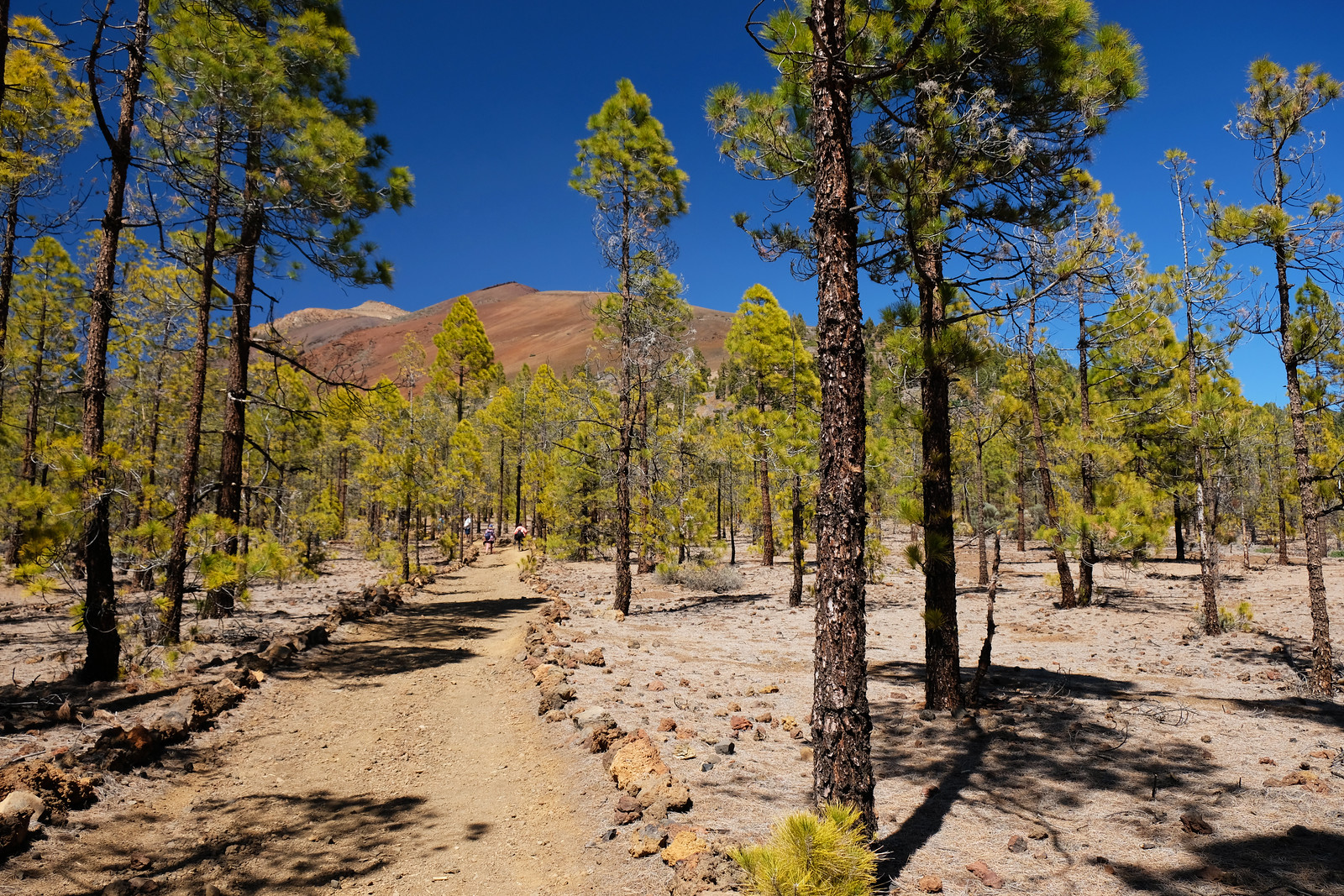 The name of this park means Crown Forest, and this protected woodland really is like a crown on Teide. It surrounds the national park and gives home to the largest forests in Tenerife. It’s a bright forest, mostly pine, with a warm Mediterranean vibe.

You drive through Corona Forestal on your way to Teide, anyway, and it tempts with some nice picnic spots under the pine trees. It offers hiking and biking trails, too, and we did the one trail that’s said to be the most special there: the Lunar Landscape Trail from Vilaflor. It was a rewarding day hike with pine forests, spring flowers, spectacular rock formations and distant volcano views. If you get tired of the bareness of Teide’s landscapes, visit Corona Forestal for some greenery. 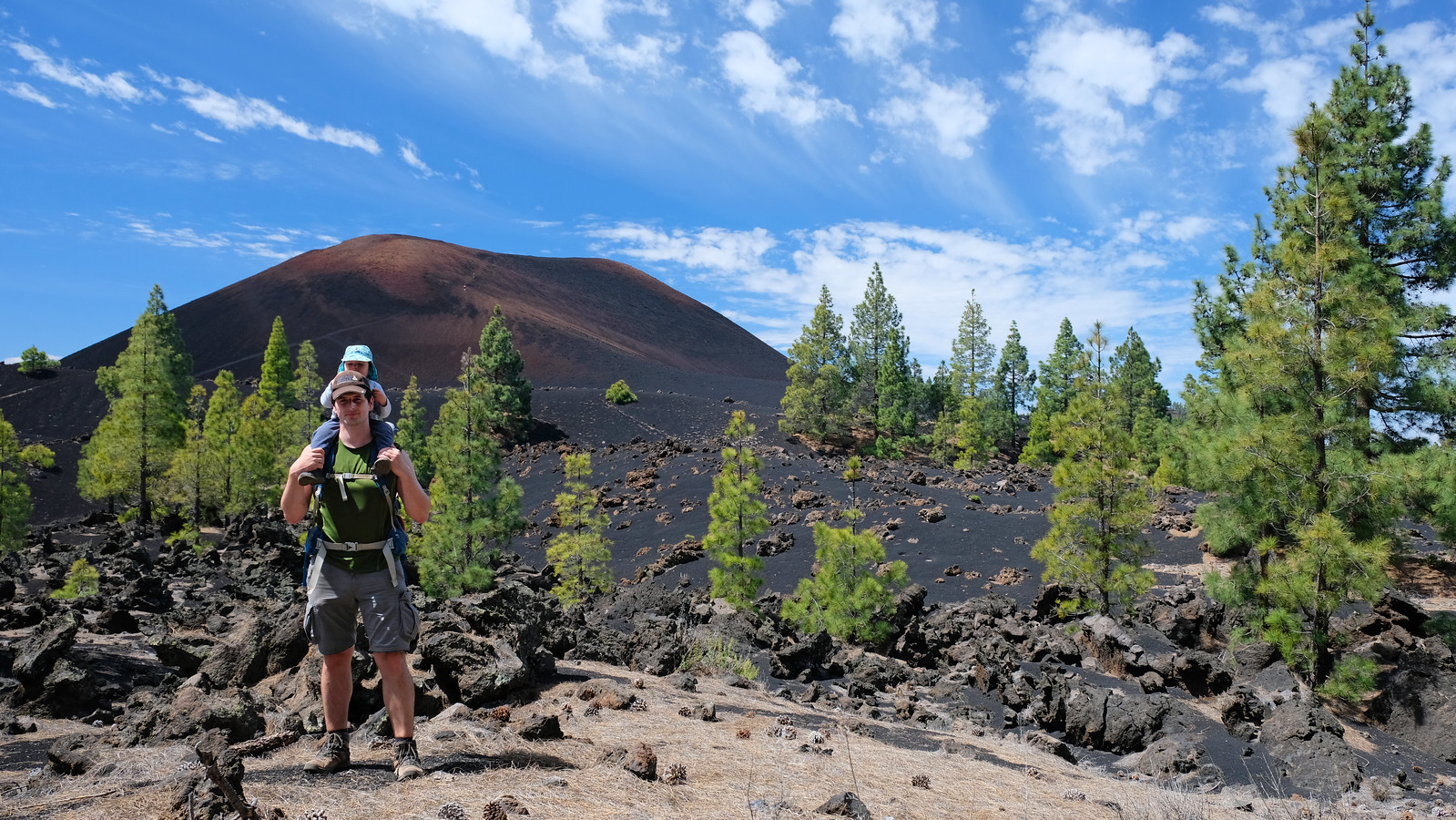 Do you want to see Tenerife’s most recent lava flows? Sure, we did! El Chinyero, standing proudly at 1560 meters above the ocean, spurted out lava for ten days in 1909. It’s almost completely bare even today, but the vegetation started to regenerate on its surroundings. 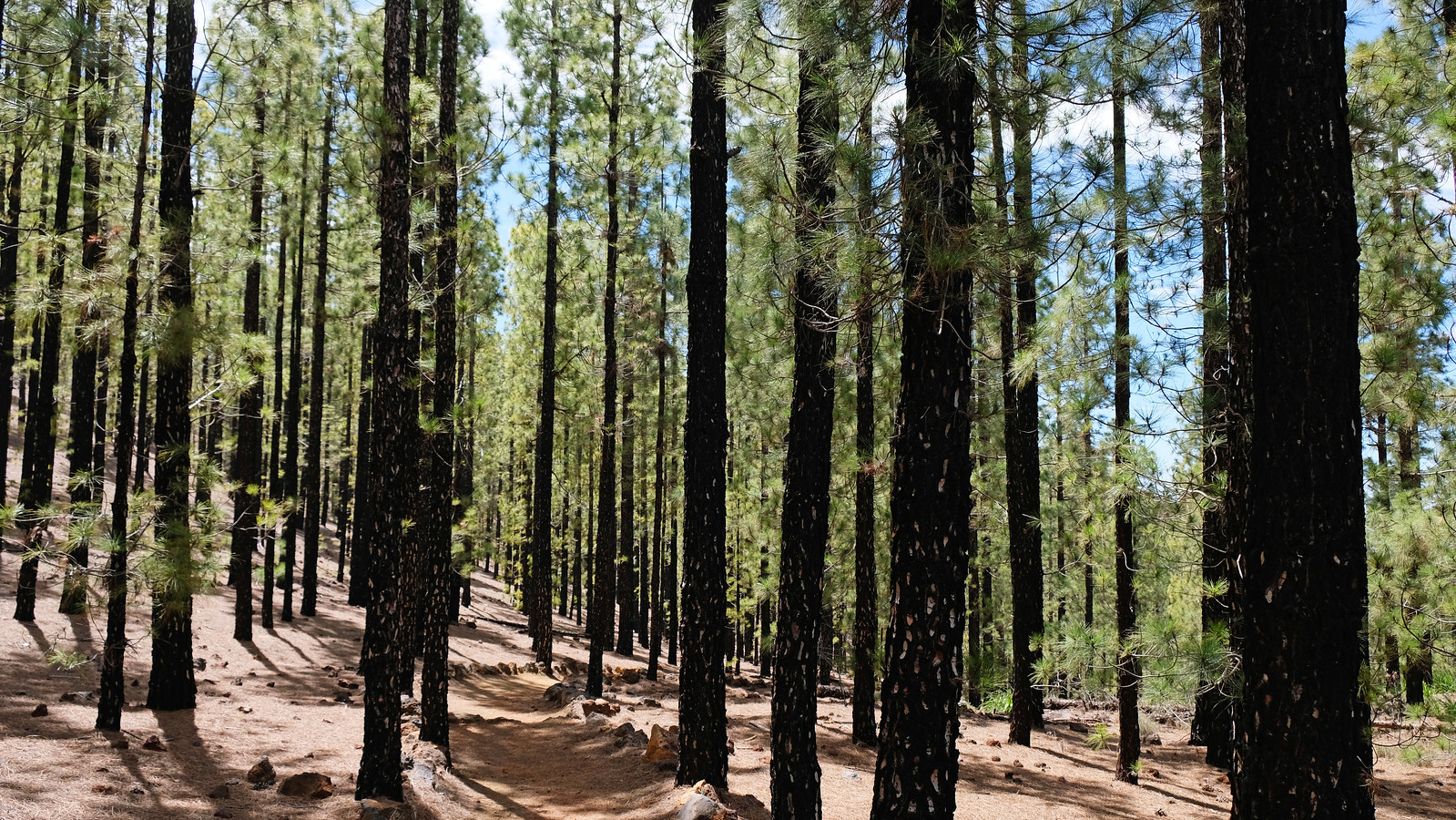 El Chinyero is a unique sight, and can be accessed from several directions. Actually, all trails in this small nature reserve end up at Chinyero. We hiked from the village of San Jose de los Llanos which was a 15 kilometres loop trail, but very easy, almost flat. 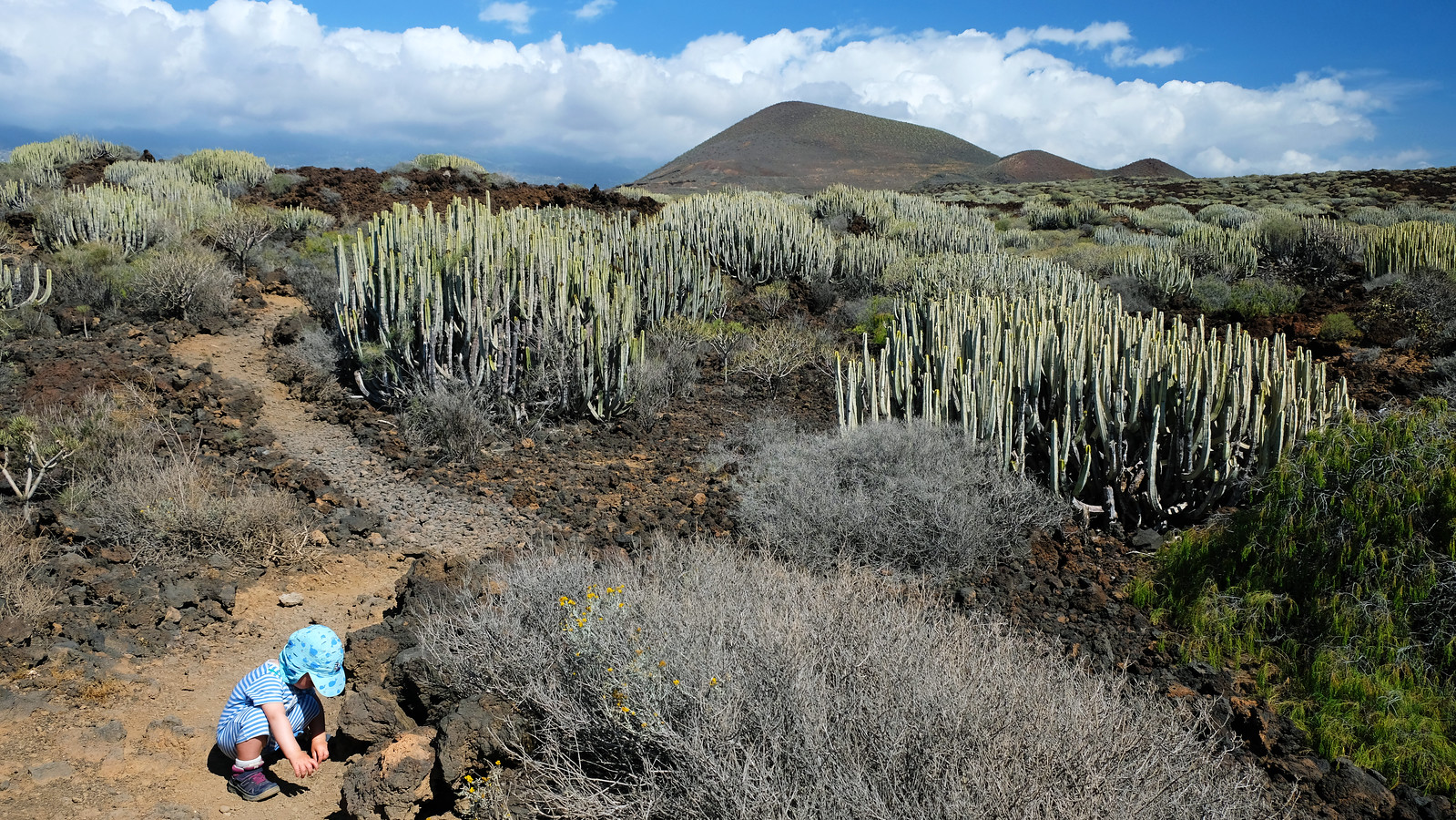 Here’s another small park, the Badlands of Güímar, with a unique volcanic landscape combined with a desert on the northeastern coast of Tenerife. We could see lava flows right by the ocean and lava tubes crashed by the waves in this wonderful park! Even some beaches were formed among the black lava rocks. 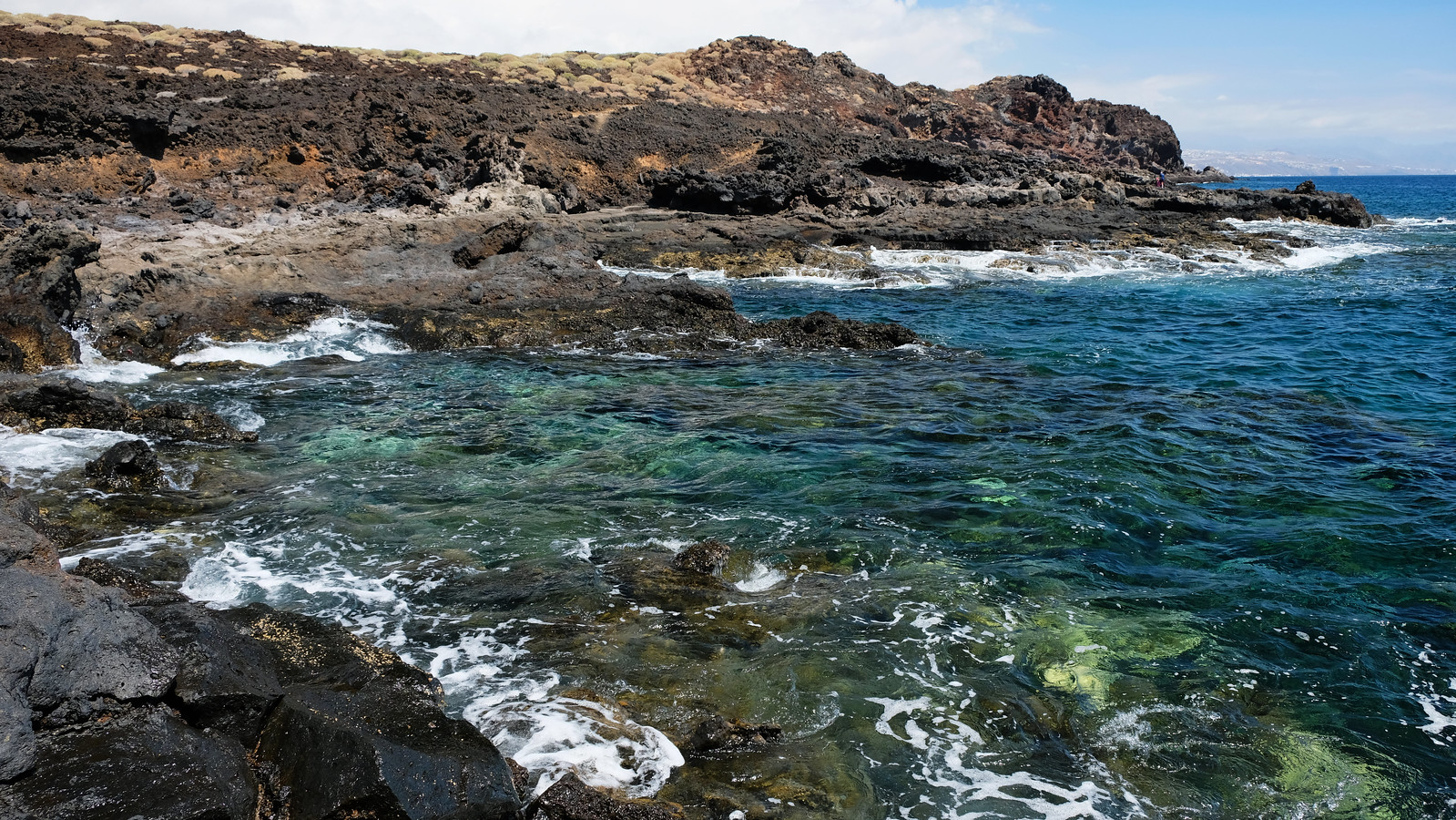 We also hiked up to the top of the cone of Montaña Grande. Its crater is about 300 meters in diameter and 50 meters deep. Actually, half a day is enough to hike all around in this park – maybe a full day if accompanied by a curious kid. Not to mention a curious toddler. 🙂

Our favorite plants were the giant cacti that look like candelabras and are native to the Canary Islands. We’ve seen lots of them on our hikes in the south part of the island, but the most in Malpaís de Güímar. 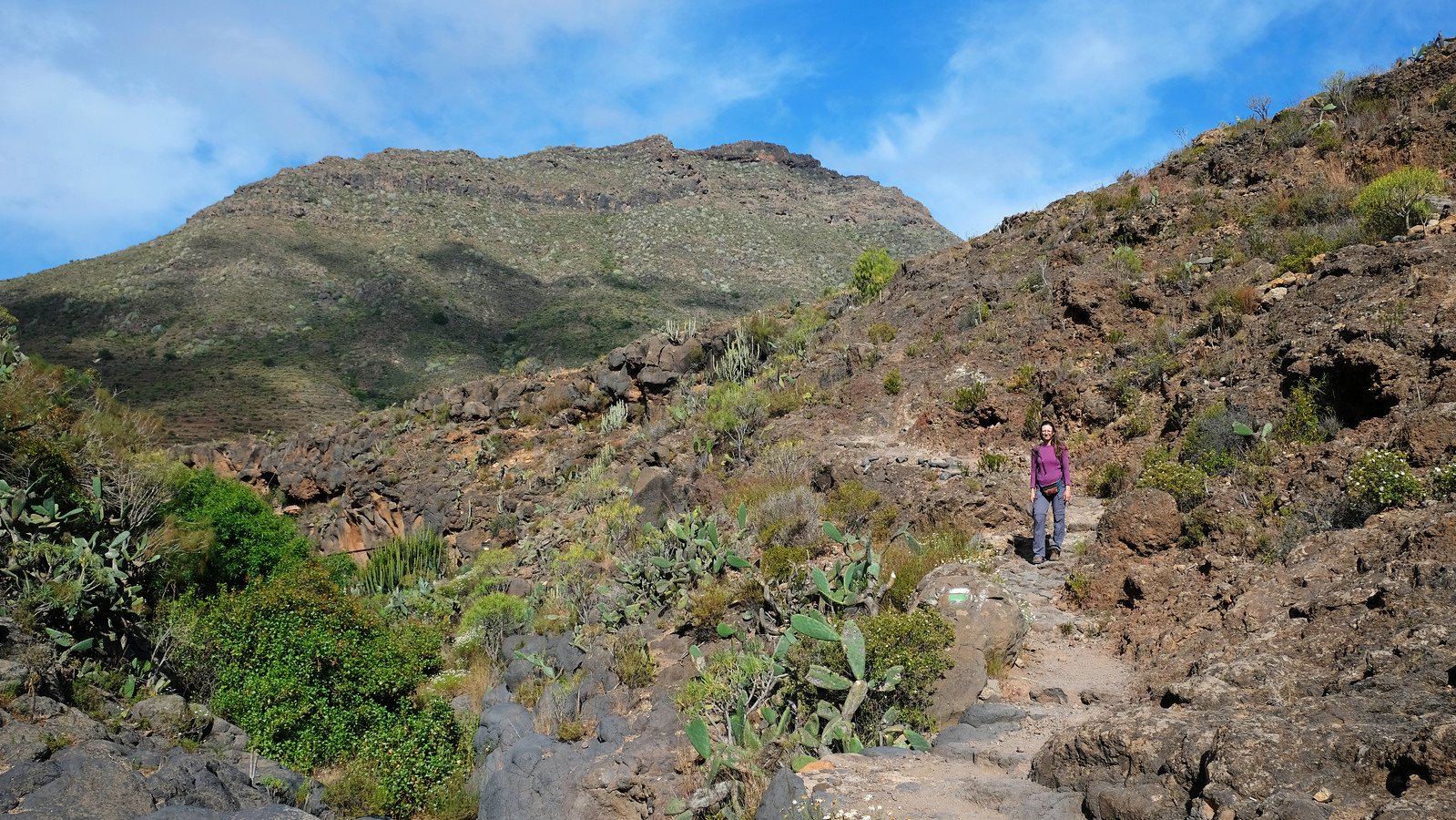 If you’re looking for trails in the south, explore the Barranco del Infierno Special Nature Reserve. It’s named after Barranco del Infierno, the “Ravine from Hell”, and it must be an amazing gorge trail that ends at a 200 metres high waterfall. It’s limited to 300 people per day which means you must book it in advance. But the reason we didn’t do it was that it’s only allowed with children above 5 years.

Barranco del Infierno is not the only trail in the reserve though. We hiked the short and scenic Roque del Conde that ends with a fabulous 360 degrees panorama of the region. Since it was April, wildflowers covered everything. It took 3 hours there and back. 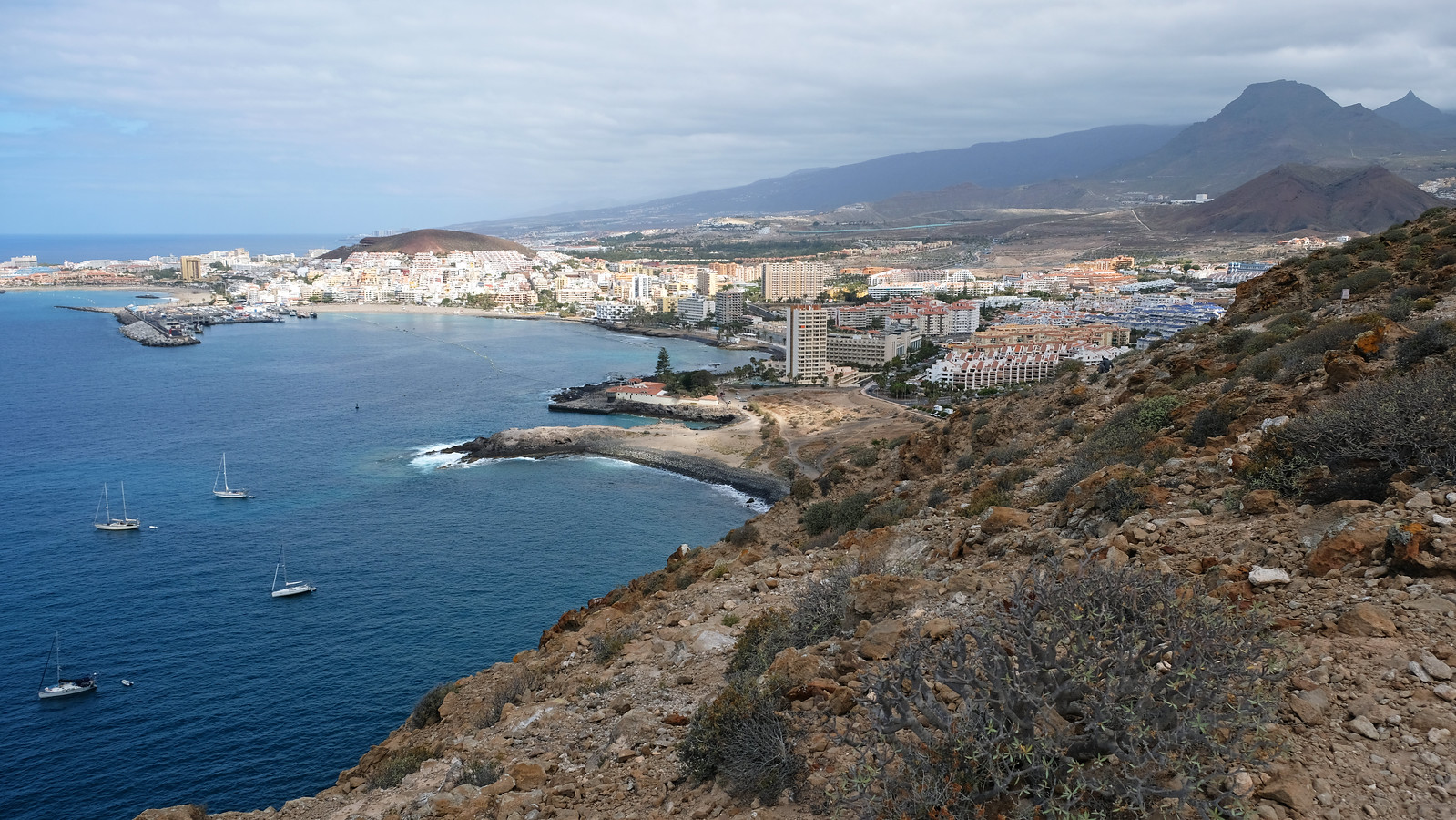 Our first coastal hike in Tenerife took place in the barren Montaña de Guaza Natural Monument on the south coast. This trail starts from Los Cristianos and ends in Palm-Mar, and most of it runs through the natural monument. There are no trees, but lots of cacti and other thorny plants – and lots of seabirds nesting at the high, vertical rock walls. Palm-Mar at the end of the trail looked like a sleepy little town with lots of palm trees and wild La Arenita Beach.

Though Montaña de Guaza is one of the small parks, the coastal trail is not the only one. You can conquer the 400 metres high volcano, too, with its two concentric craters, and wander through the deserted land. 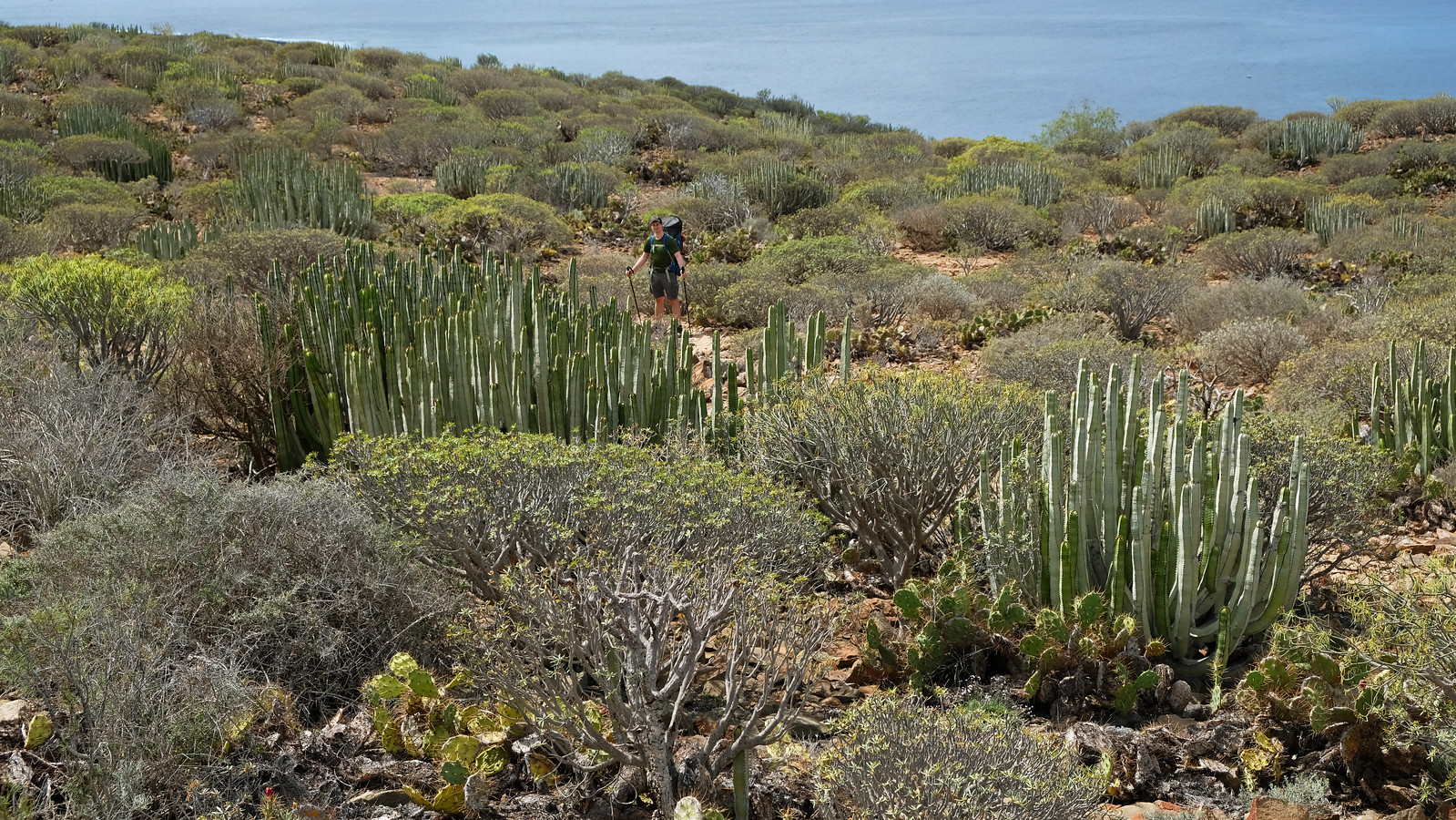 Small as is, Tenerife is in no shortage of hiking trails. Three weeks was only enough for us to explore the most well-known ones, and we could have easily spent at least another three weeks, hunting for more parks and trails. Still, the parks we collected in this post give an insight into the beauty and diversity that Tenerife offers, and everyone can find their perfect hiking trails or roadside viewpoints in them.

Which is your favorite park in the Canary Islands?