Natural pools are special – and rare. But not in Tenerife where we bumped into lots of these very own, naturally formed swimming pools of the ocean while exploring the coast. At some places, local authorities intervened to make the pool safer, or they promptly built a swimming pool right next to the ocean so that waves crash into it. However, most pools were formed by the waves and the lava that flowed into the ocean.

While it’s a unique experience swimming in a pool like this, it could be dangerous, too. Big waves could sweep you out into the ocean or hit you to the rocks. The general rule is to swim in the pools only when the ocean is calm, and possibly at low tide. The swimming pools are somewhat safer, but there are times when waves just sweep through them (a fascinating sight, by the way). They’re closed during that time – and some of the natural pools are also closed (by a barrier or chain at the entrance) when they’re not safe to swim. 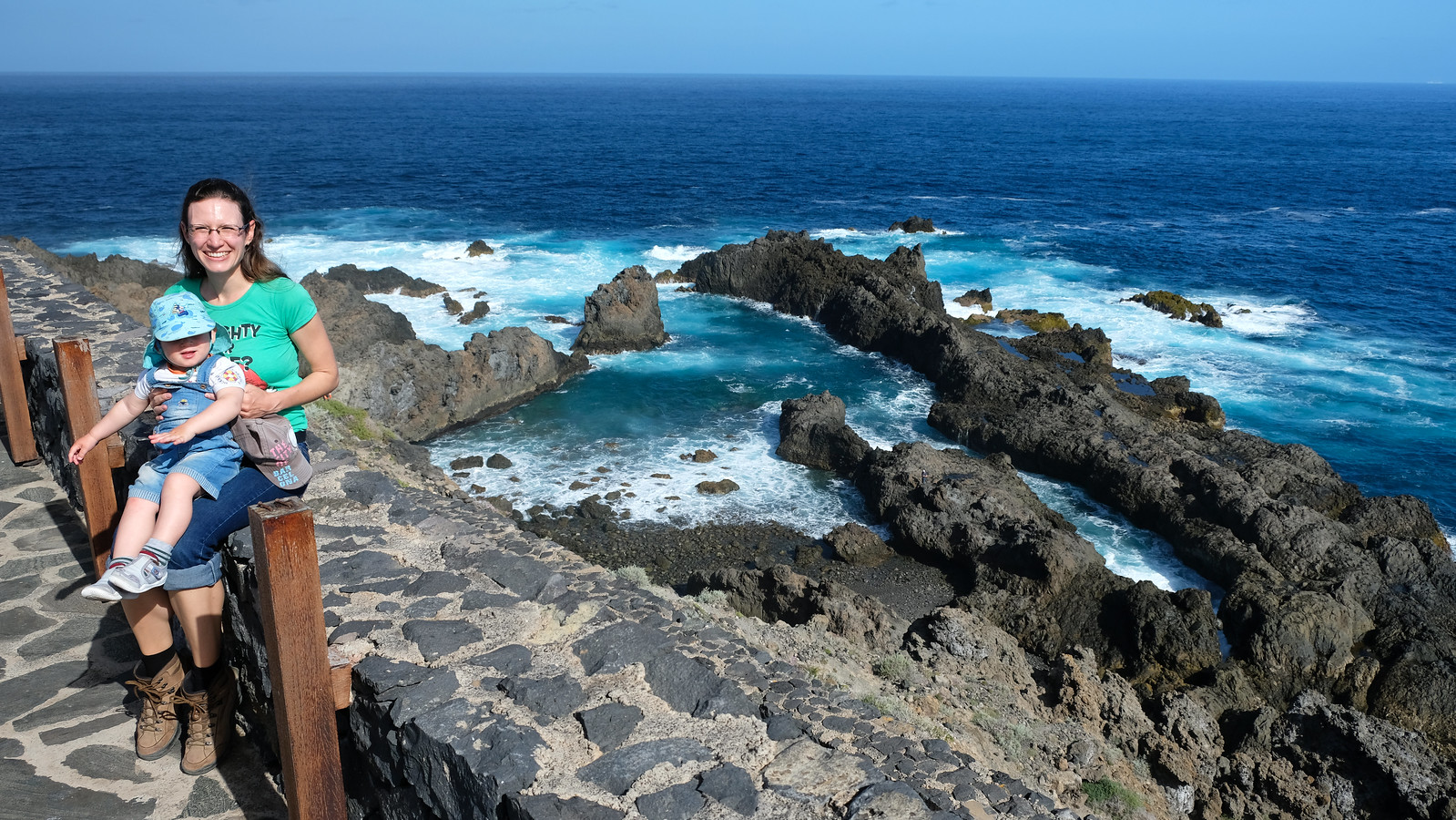 So even though we’ve never seen so many natural pools anywhere else as in Tenerife, we only swam once – and in a natural swimming pool. This was not only because the waves were large, but also because sea temperatures in March and early April were not what we’d call pleasant for swimming (18-19°C). 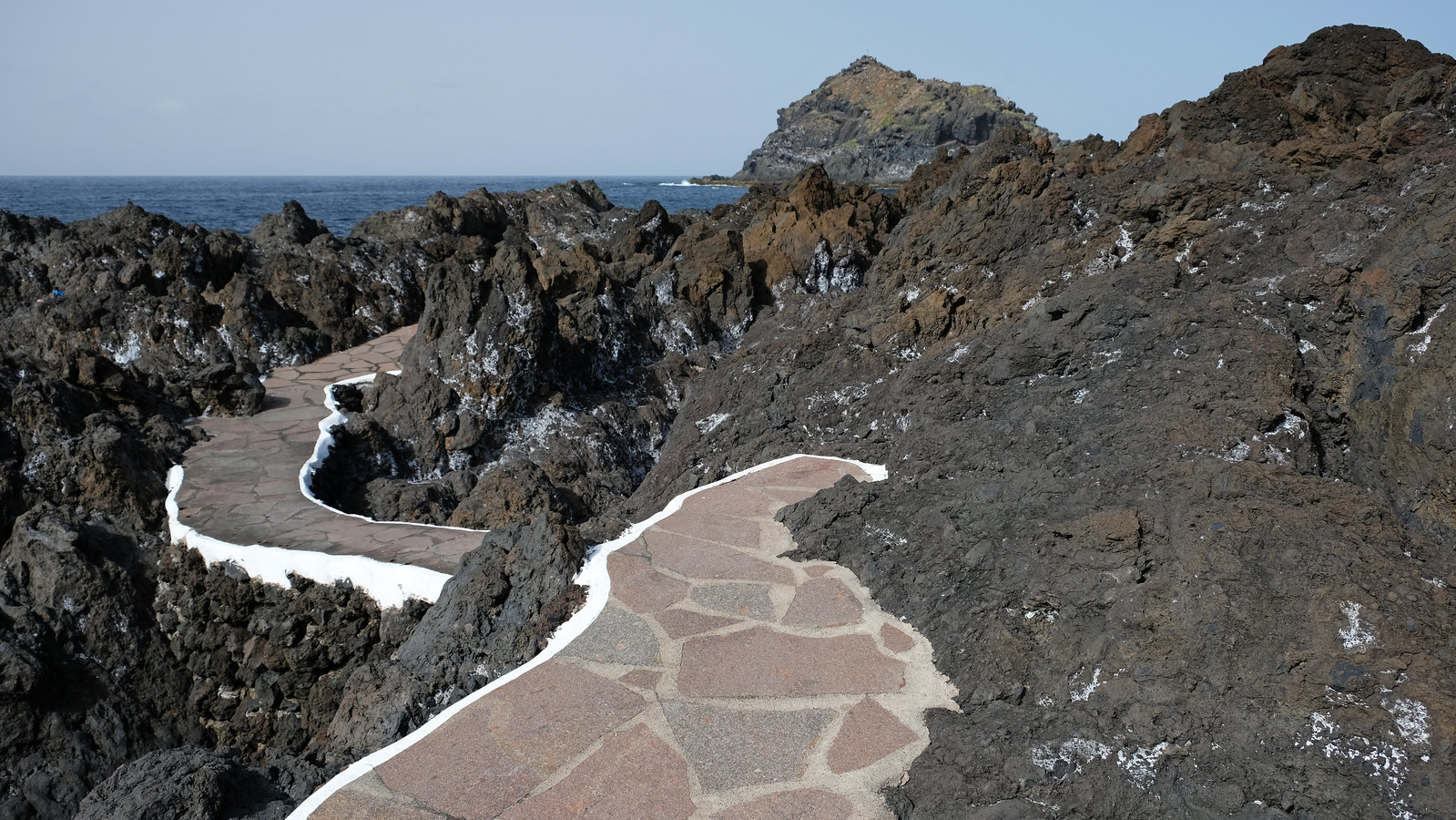 The first natural pool we encountered was in Garachico. El Caletón is actually not only one pool but a series of them. Some are deeper and larger, some are shallower and smaller – just the ideal size for a toddler to play in the water, and so did our Tomi. The pools are natural, but a paved walkway connects the rocks, and stairs were built to help you access the pools. Except for the human made swimming pools, El Caletón pools were probably the most protected natural pools we encountered in Tenerife. 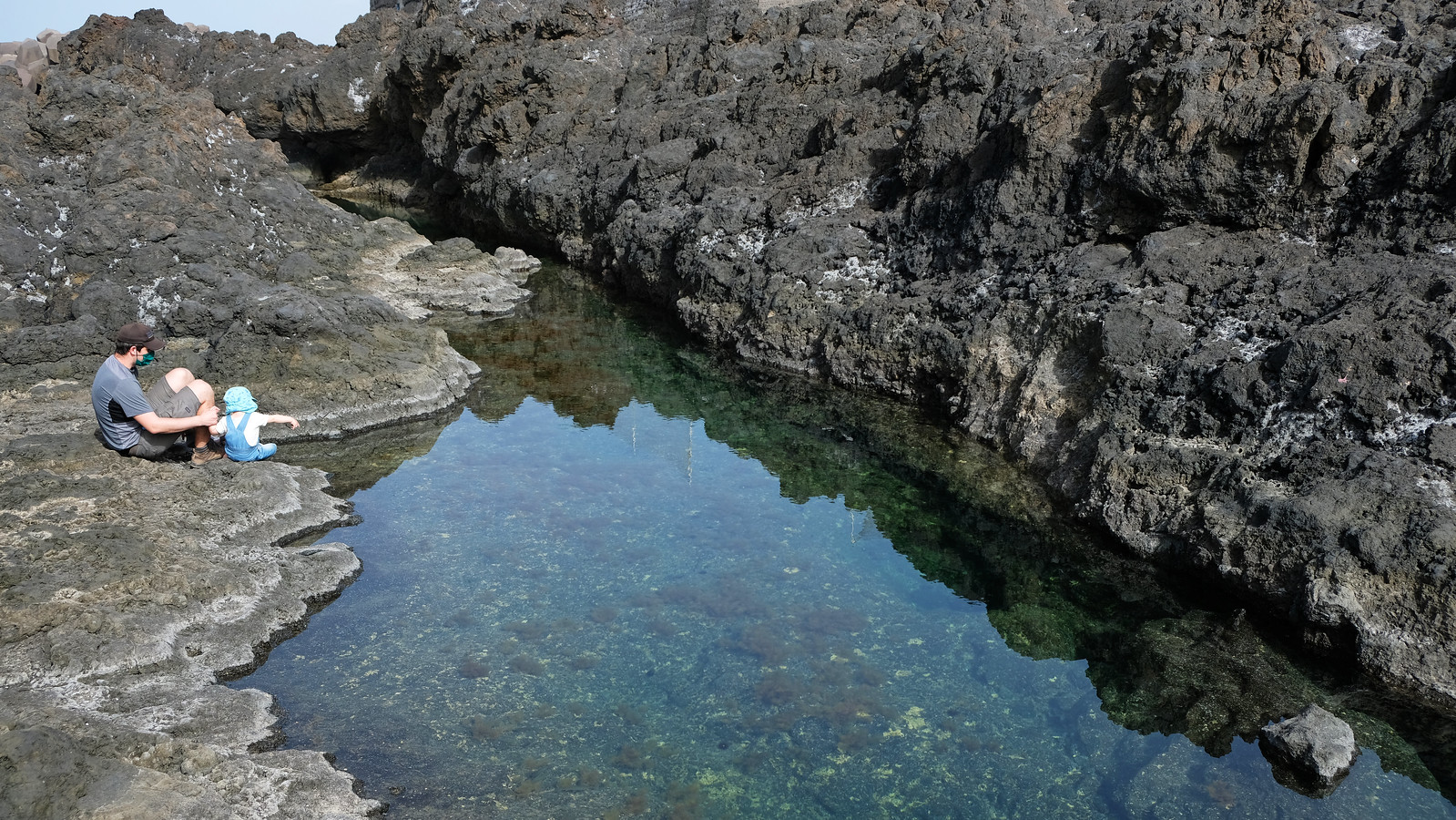 The pools were formed as a result of the eruption of 1706 that changed Garachico’s fate, turning the busiest port into a laid-back coastal small town by filling up the seabed with lava. However, this is the lava that created the El Caletón natural pools, too, giving tourists a good reason to visit the lovely town.

Another northern coastal town, San Juan de la Rambla is home to the La Laja pools (charco is the word for pool in Spanish). We parked our car on the street and walked to the La Laja viewpoint. Stairs took us down to the rock pool from there. La Laja is a single pool, but deep enough and very picturesque. 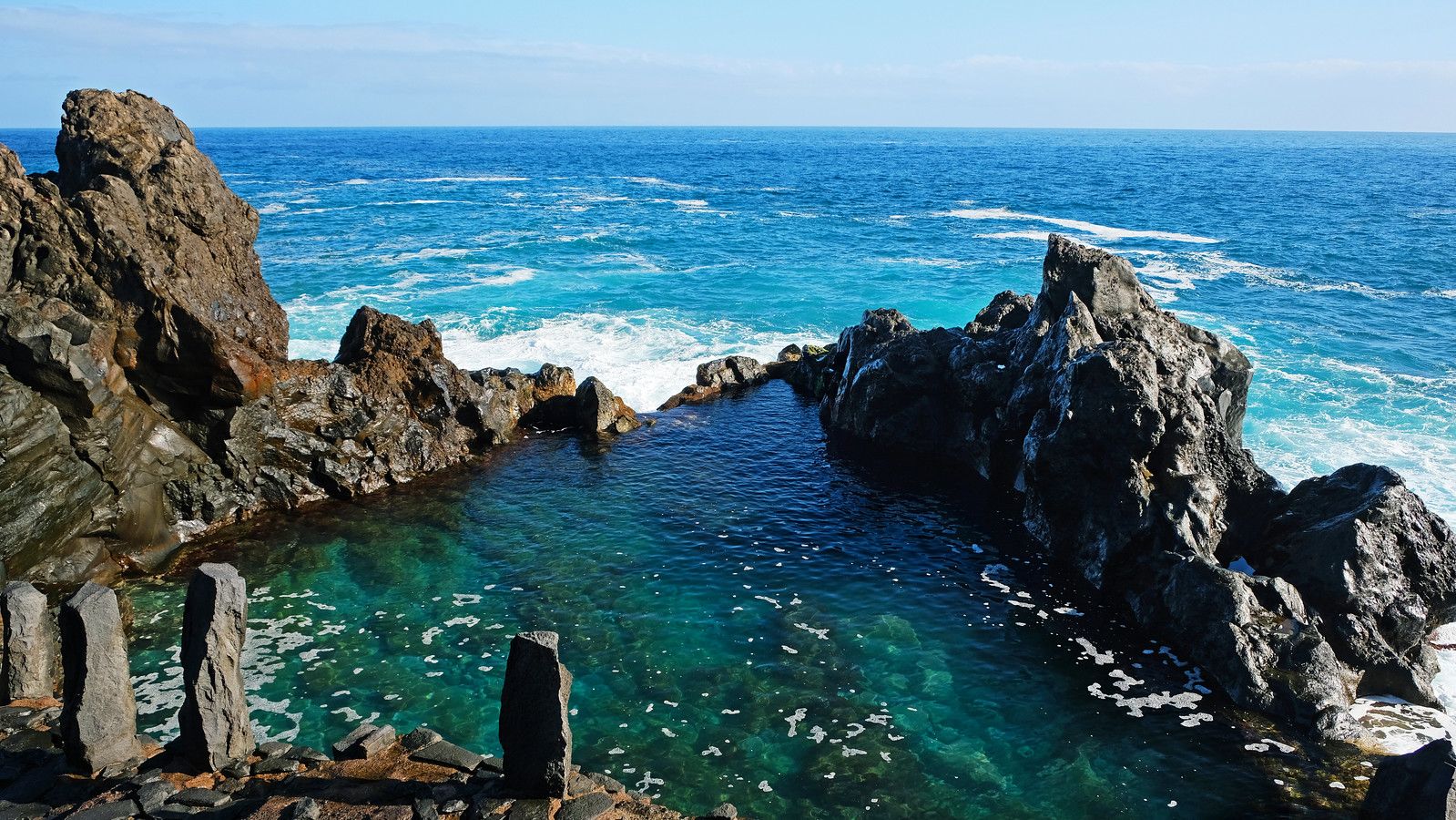 Giant waves swept through the pool as we walked around. It was definitely not the time for jumping in, rather for taking pictures. 🙂

Not far from La Laja, there’s another small town, La Guancha with another set of natural pools surrounded by lava rocks: Charco del Viento. It has four pools to choose from when sea conditions allow. 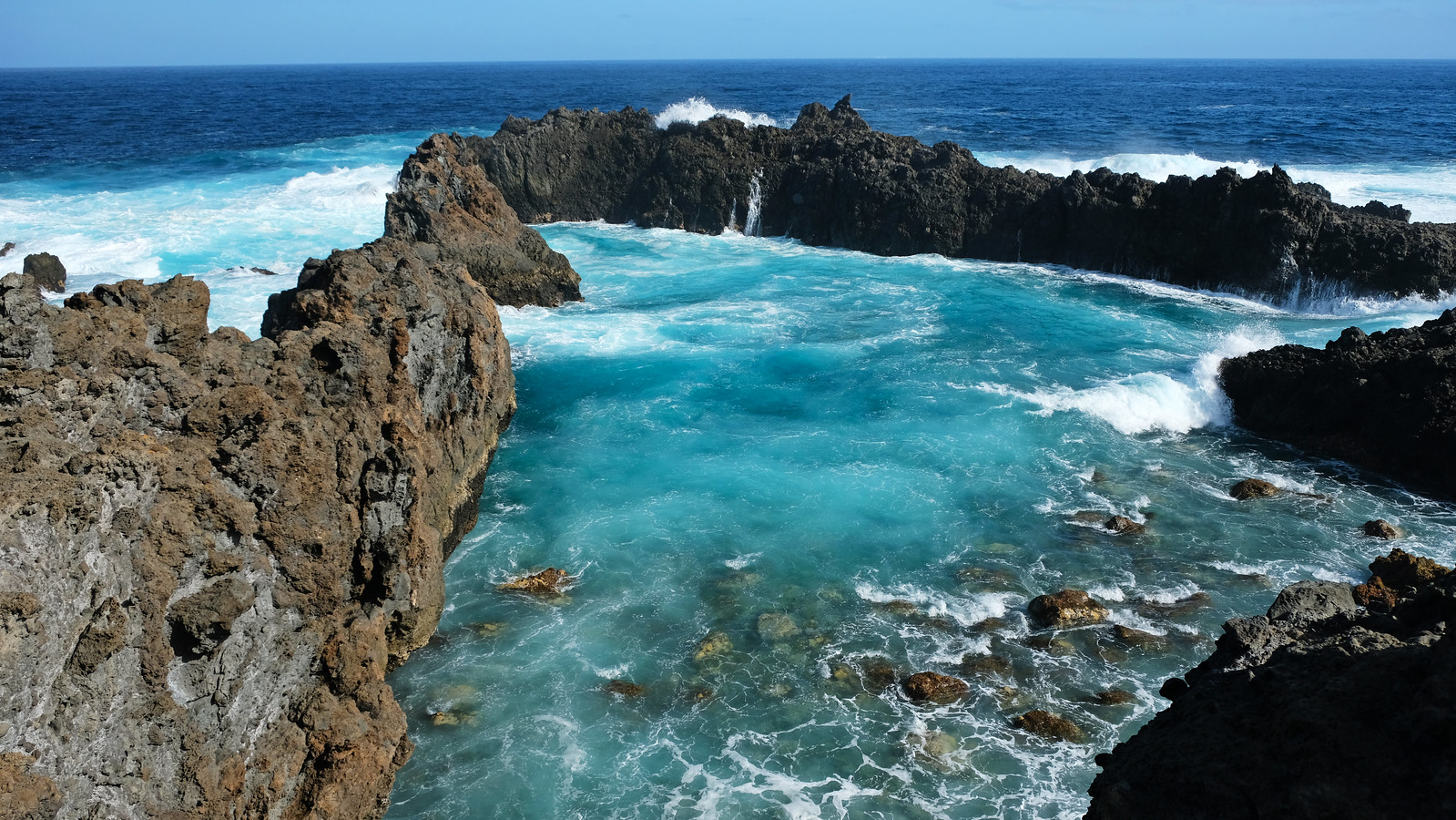 To access the pools, we had to drive down a narrow road passing by banana plantations, then a parking lot awaited at the end of it. It seemed to be big, but on a hot, calm day I imagine it filling up quickly. Our day was sunny but not calm, and the power of the waves was impressive, it even created little waterfalls while crashing into the largest pool. 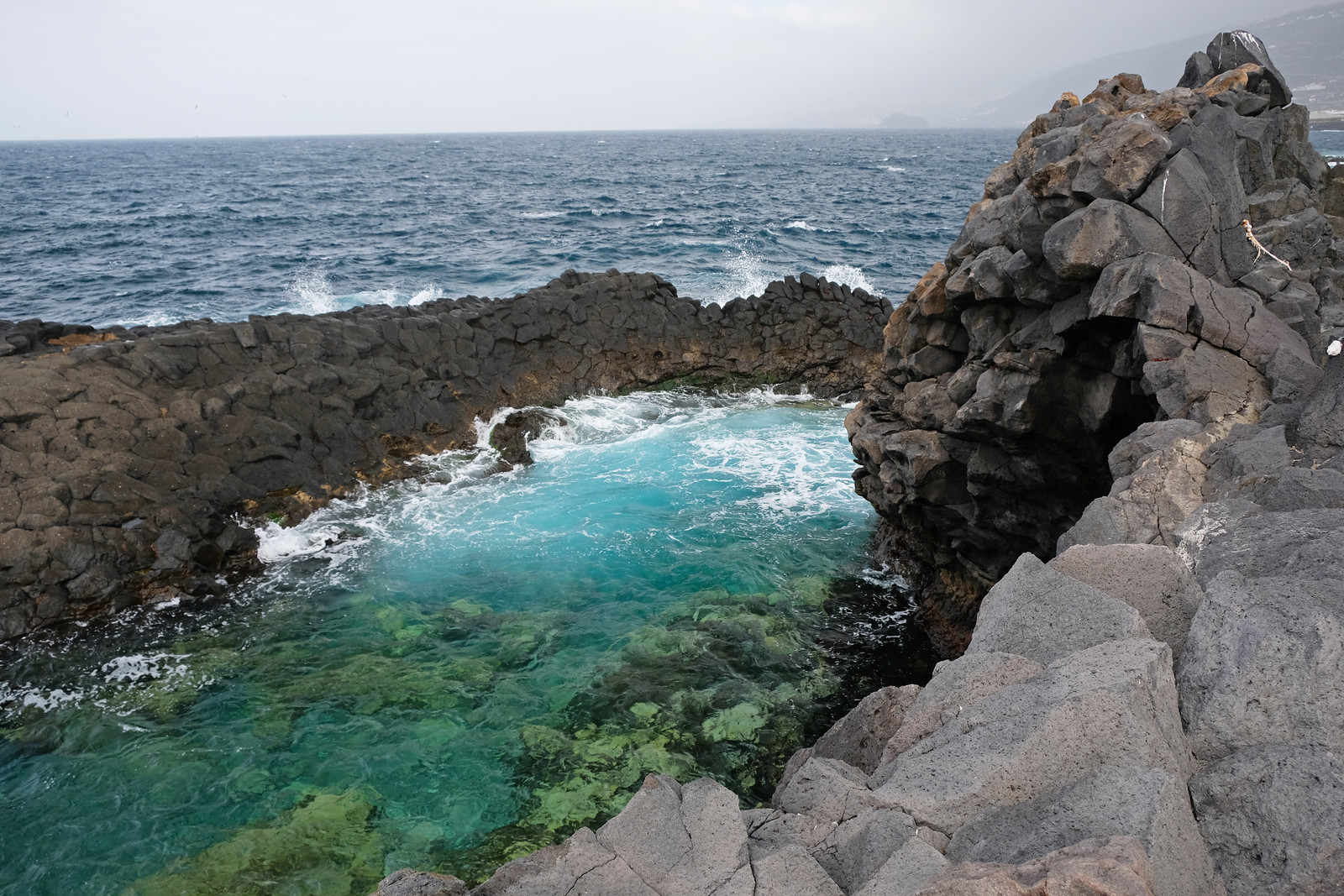 The volcanic rock pool of Don Gabino is on the coast of Los Silos, and stairs give access to it. We couldn’t drive all the way there, so we left our car where the paved road ended and walked to the pool in about 10 minutes. But this walk turned out to be the highlight! 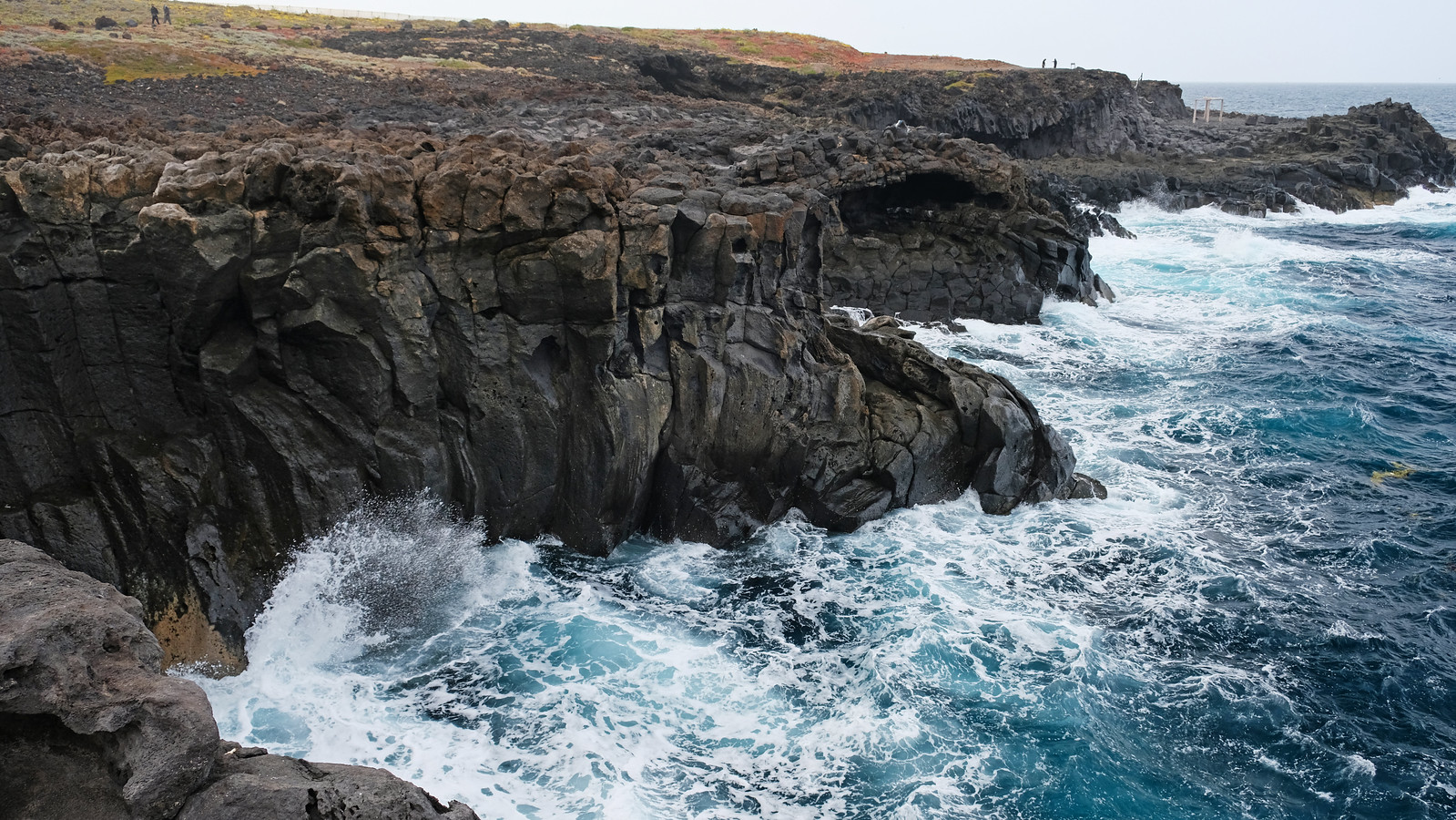 An easy, almost flat trail runs along the coast, and we continued further after Charco Don Gabino. The coastal basalt rocks were fascinating, the waves were crashing hard against them, it sounded like thunder as they filled the coves.

After walking back to Charco Don Gabino, we realized there’s another natural pool if we walk a few minutes into the other direction… 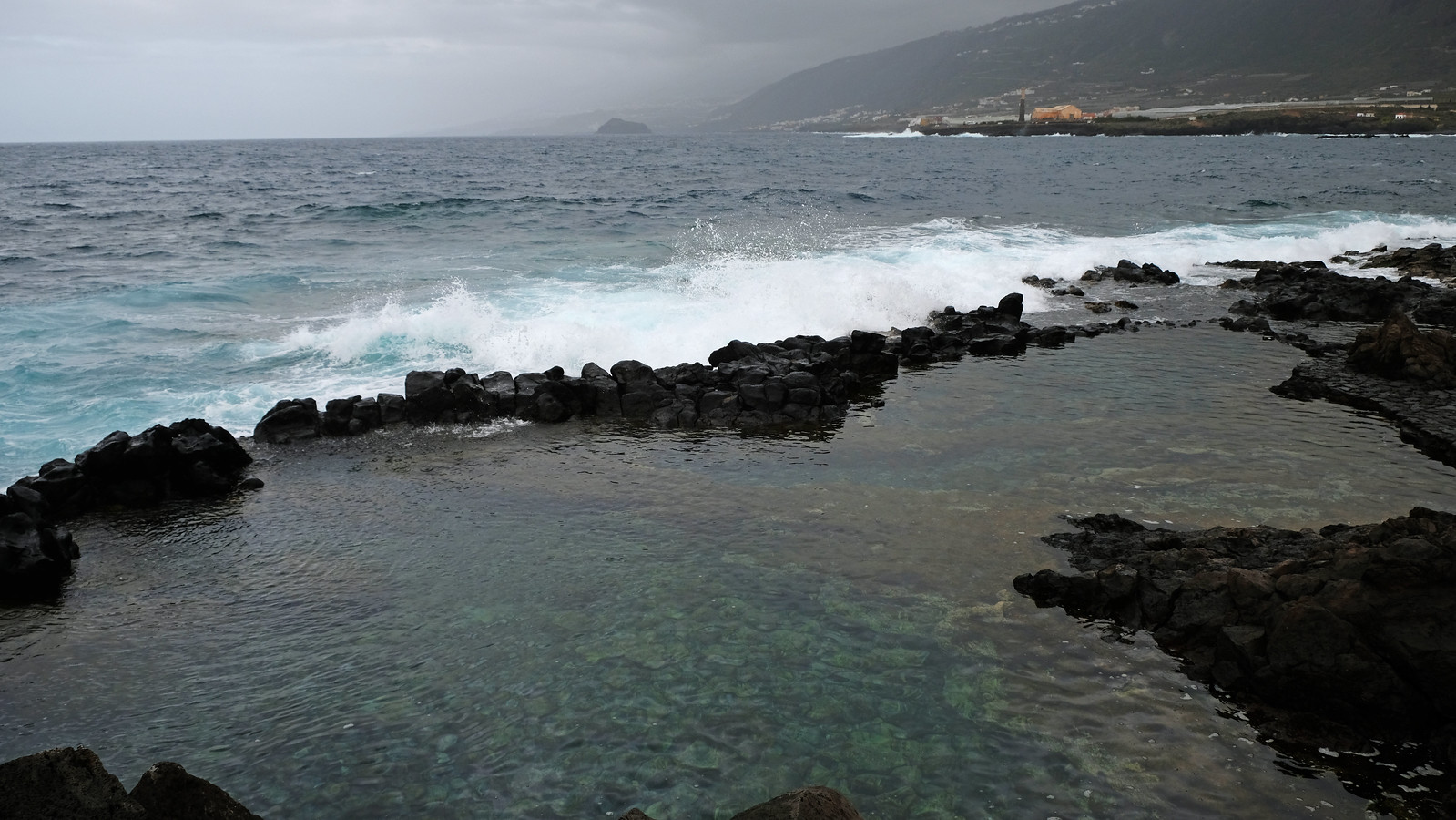 That was Los Chochos, another rock pool that’s about 2 meters deep and can be accessed by stairs. Not that anything tempted us into the water, because it was drizzling, strong wind blew – and the waves were magnificent! 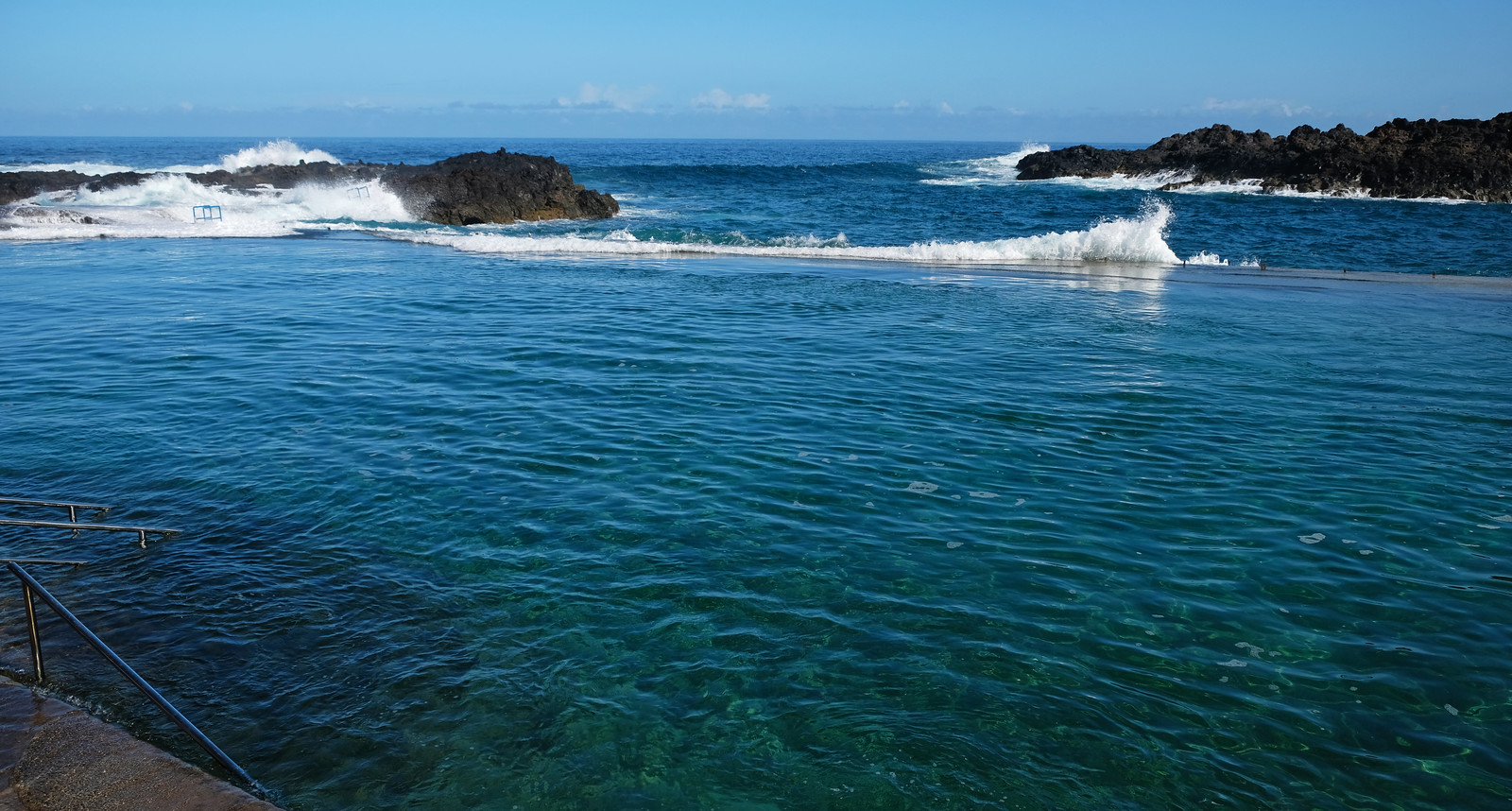 Mesa del Mar offers a variety of options for swimming. The large natural swimming pool can be seen from the winding road that took us down there. This is a real swimming pool, not made of basalt rocks but built by humans, however, the mighty Atlantic Ocean fills it with water, and it’s a free public pool. 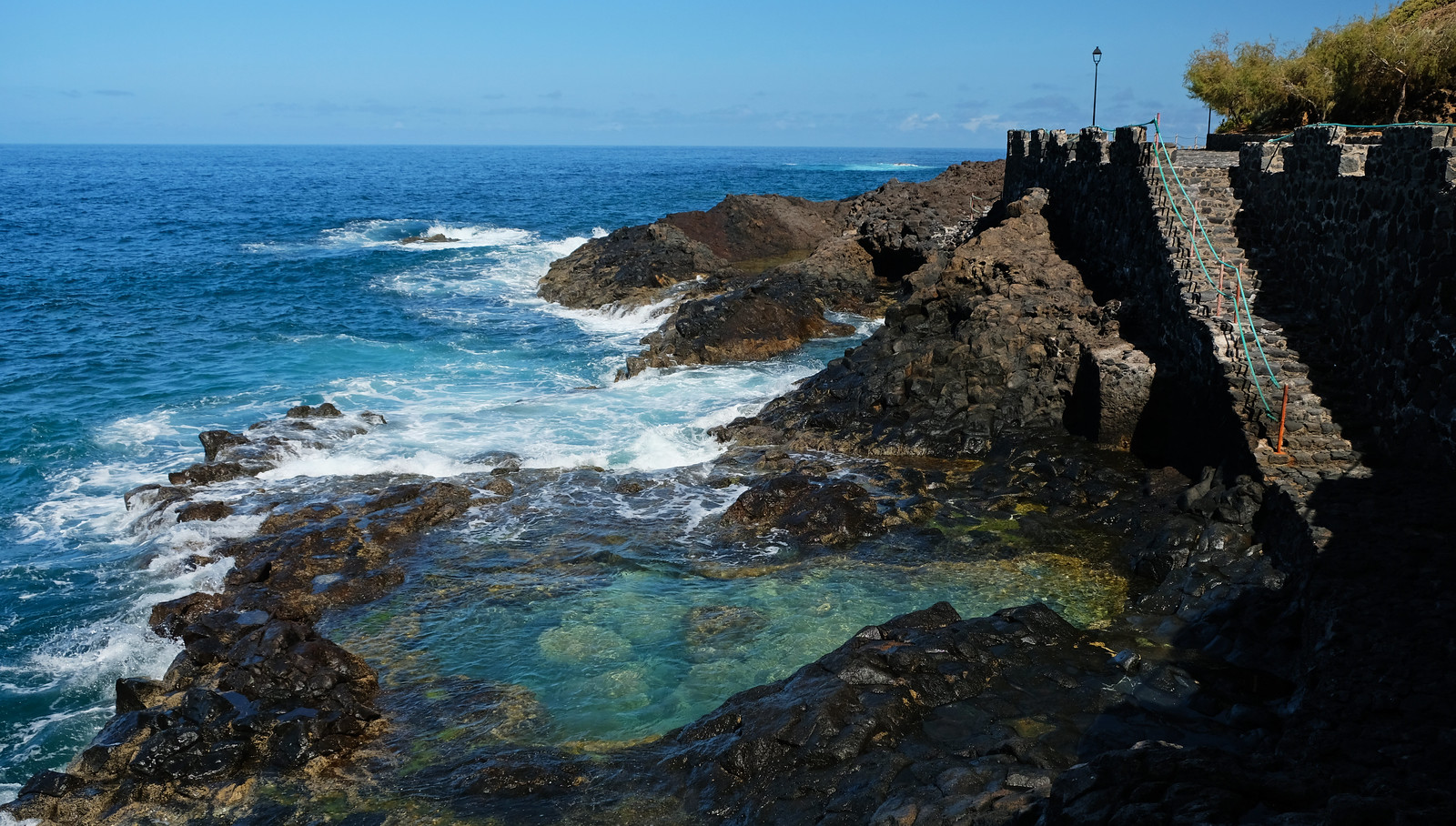 After a short visit, we walked through the tunnel to La Arena Beach where we spent most of our day. We even had a swim in the ocean. La Arena Beach is a beautiful, natural black sand beach with views of El Teide in the distance. It’s somewhat protected, but waves can still be large, so you need to be careful. 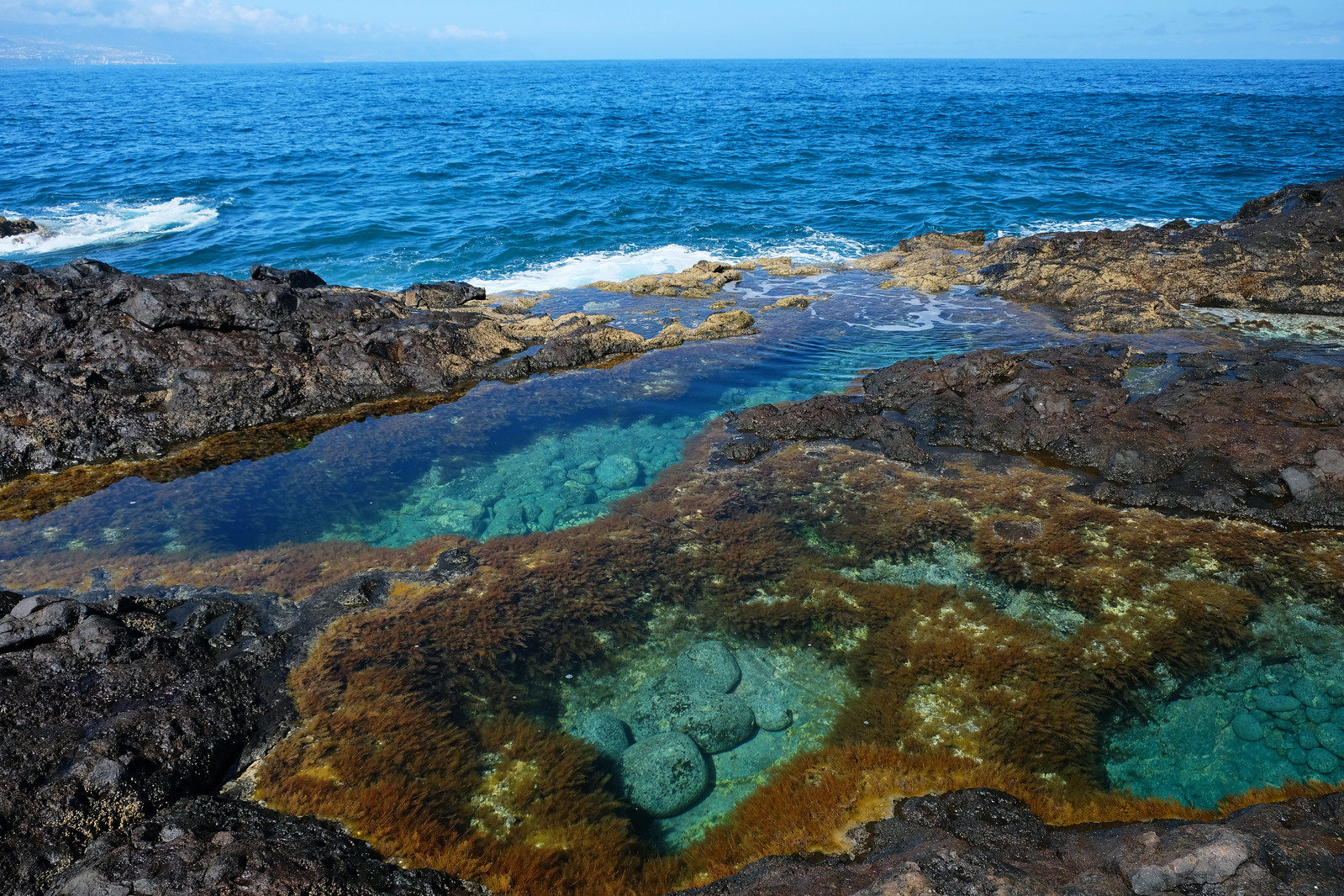 You’re still not out of swimming options though. Walking to the end of La Arena Beach and then further on the promenade, we found natural rock pools, as well. Sea conditions were not calm enough to use them, but they looked awesome. So Mesa del Mar is really a 3 in 1 when it comes to enjoying the water, and hopefully at least one of the available options will be safe. 😀 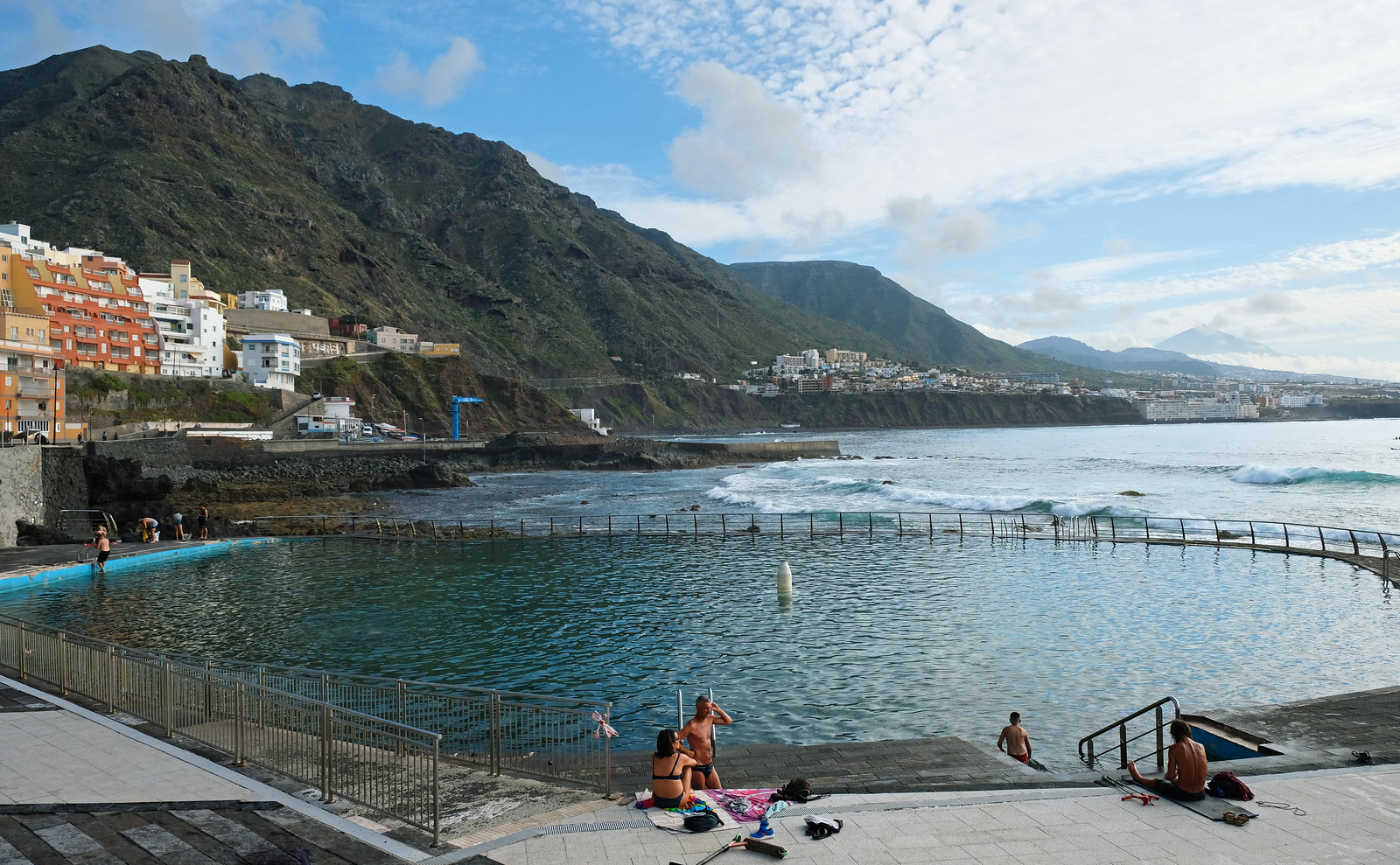 In addition to the rock pools, there are some more natural swimming pools that are similar to the one built in Mesa del Mar. We’ve been to the swimming pools at Punta del Hidalgo (Piscina Natural Punta Del Hidalgo) and at Bajamar (Piscinas de Bajamar). Both offer great views of the lush green Anaga Mountains towering above them.

Punta del Hidalgo has one swimming pool, but it’s surrounded by a large tide pool area which is suitable for toddlers and small kids, too, because most pools there are sheltered, shallow and warm – at least at low tide. 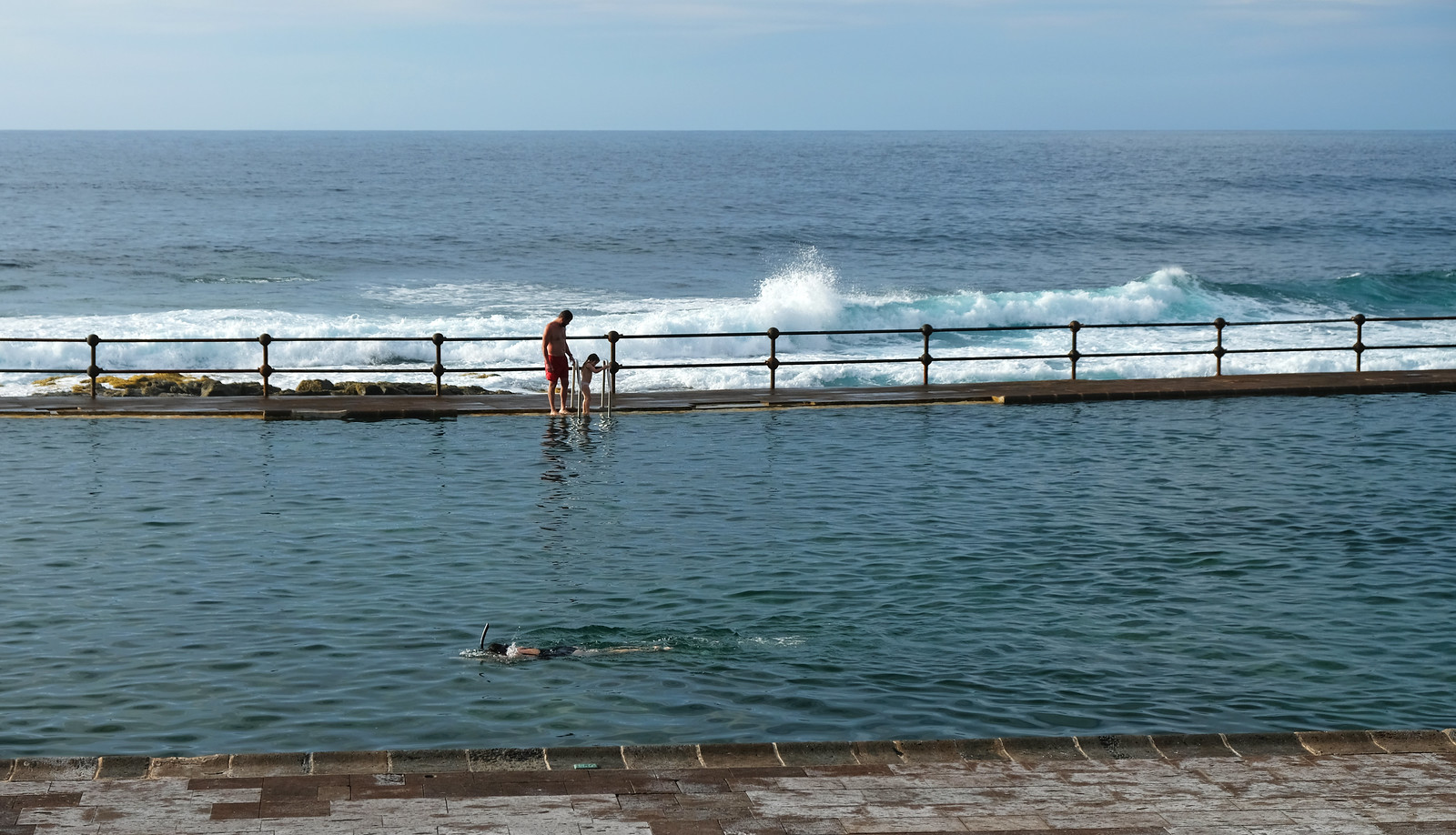 Bajamar has a nice, artificially protected, small sandy beach and three natural swimming pools right next to it. One of the three is specifically for kids, and the two other ones are directly by the water, so waves crash into them. Even though waves are often big here, the beach and the swimming pools are protected enough to provide a safe swimming opportunity, and they make Bajamar one of the best places for families on the north coast of Tenerife.

All the pools on a map

In case you have any trouble finding these pools, we marked all of them on the map below:

And no, they’re not all the natural pools in Tenerife, they’re those that we visited. There are Charco de Isla Cangrejo in Los Gigantes, Charco de El Rayo in Buenavista del Norte or the natural swimming pools of Alcalá. Tenerife surely offers a large selection, and they all have their own charm.

Do you have a favorite natural pool – anywhere in the world?