We think it is, and here are our reasons: it’s very scenic all the way, with panoramic views of the heart of Teide National Park and close views of several cool rock formations; it’s a medium difficulty, 10 kilometres loop trail that’s doable for the average hiker; no permission is needed to do it (unlike for conquering the peak of El Teide). 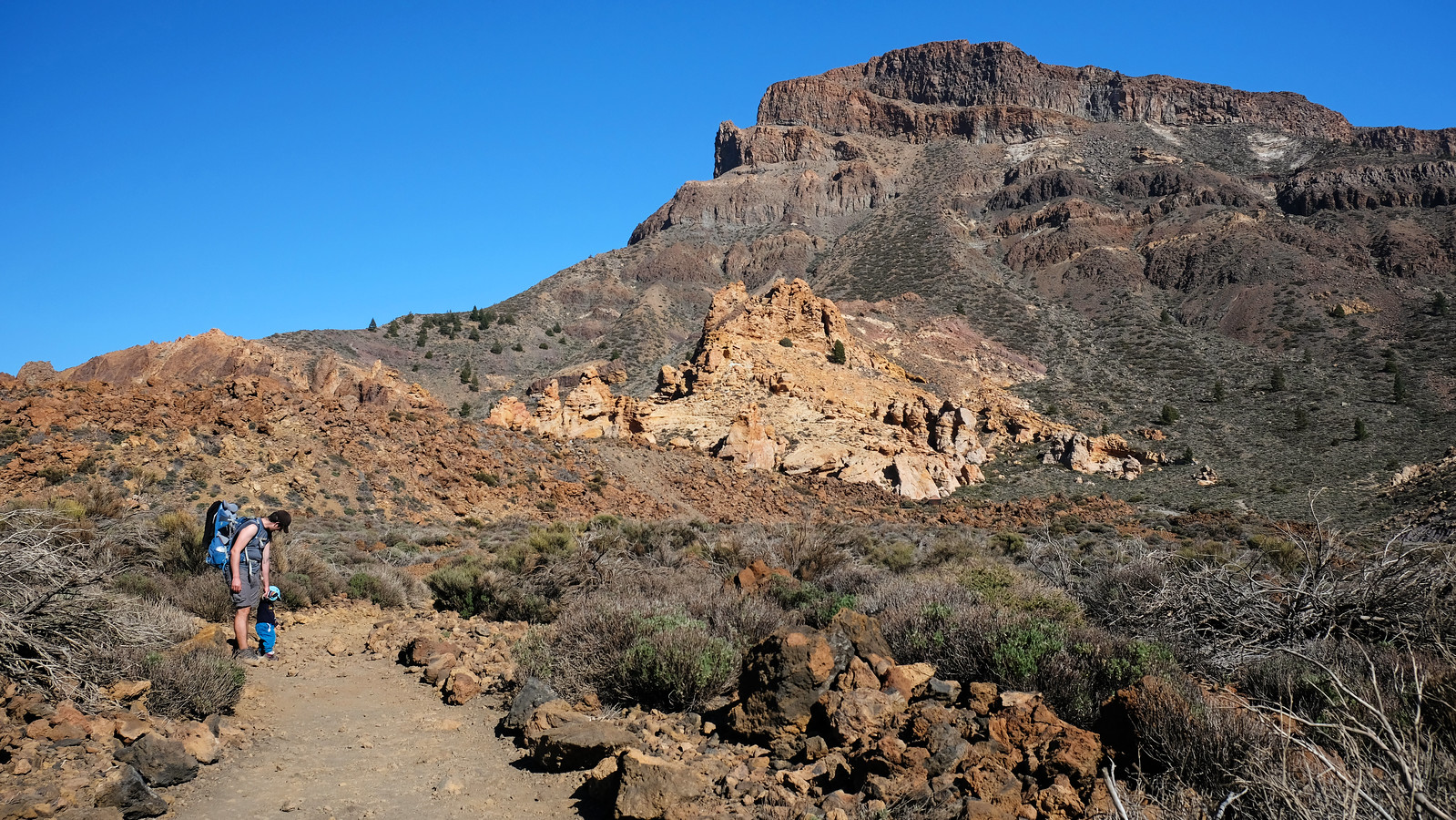 The Montaña Guajara Circuit Trail is long and challenging enough to be considered as a proper hike, but it won’t fill your whole day, so you’ll still have time to comfortably do your scenic drive and stop at all the viewpoints in the national park. It offers amazing views of the lava flows and the peak of El Teide, and also of the “Sea of Clouds” from above. Wildflowers are abundant along several sections of the circuit in spring. Do you need any more reasons? Then let’s see the details of the hike. 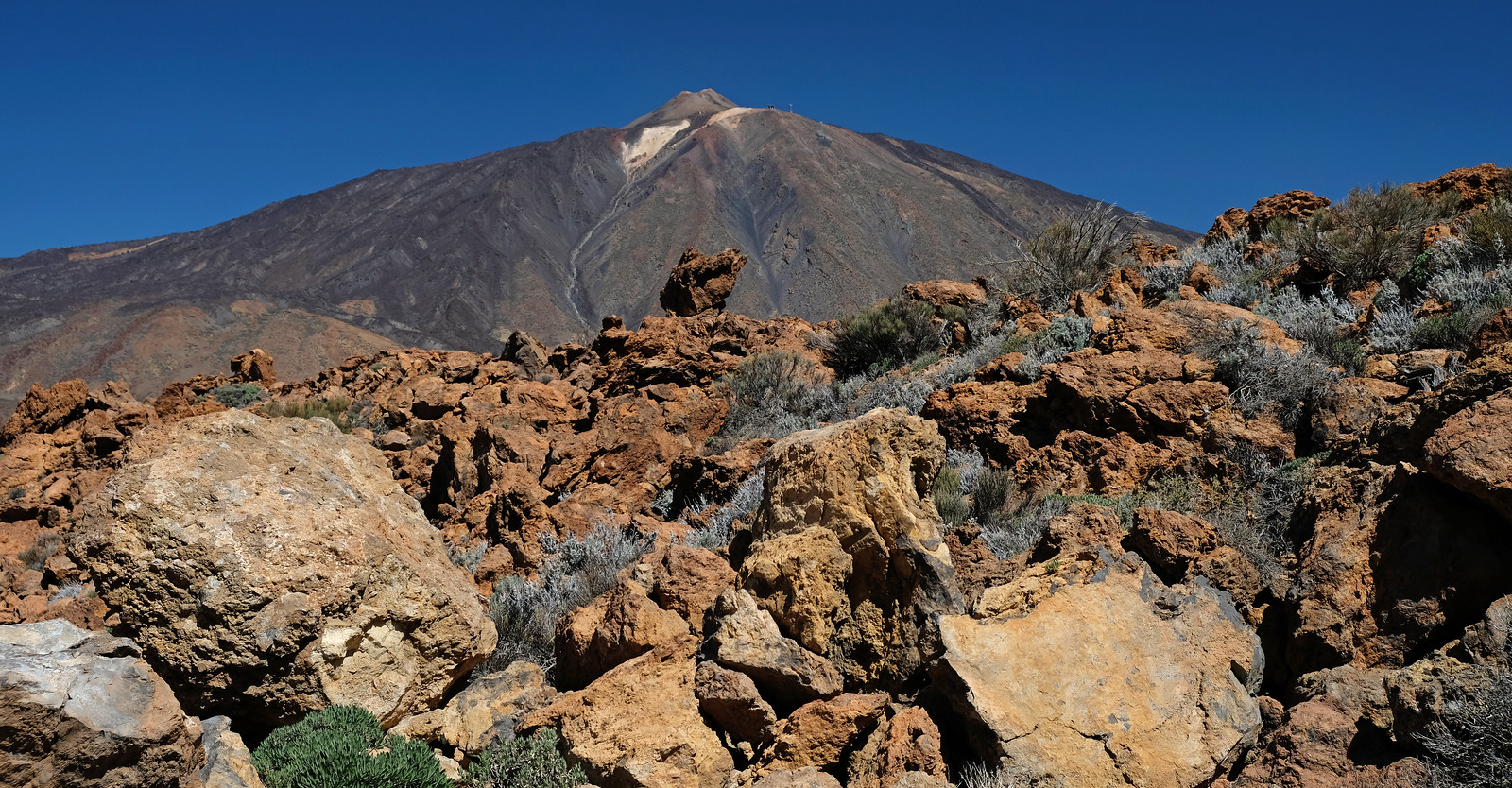 The trail starts from the Cañada Blanca Visitor Center & Hotel Parador (you find it as Centro de visitantes de “Cañada Blanca” on Google Maps). There’s a parking lot that’s reserved for the guests of the hotel, but there’s still plenty of space to park on the side of the road in front of the visitor center.

As we got out of the car, El Teide towered above us on one side, and Montaña Guajara on the other. Guajara is a 2718 metres high peak, but since we were already above 2100 at the visitor center, it seemed doable even with carrying Tomi for the most part. And it was – however, don’t forget that the higher you are, the harder it is to do any physically challenging activities. So hiking above 2000 metres is tiring, even if it’s not a strenuous trail, like this one. 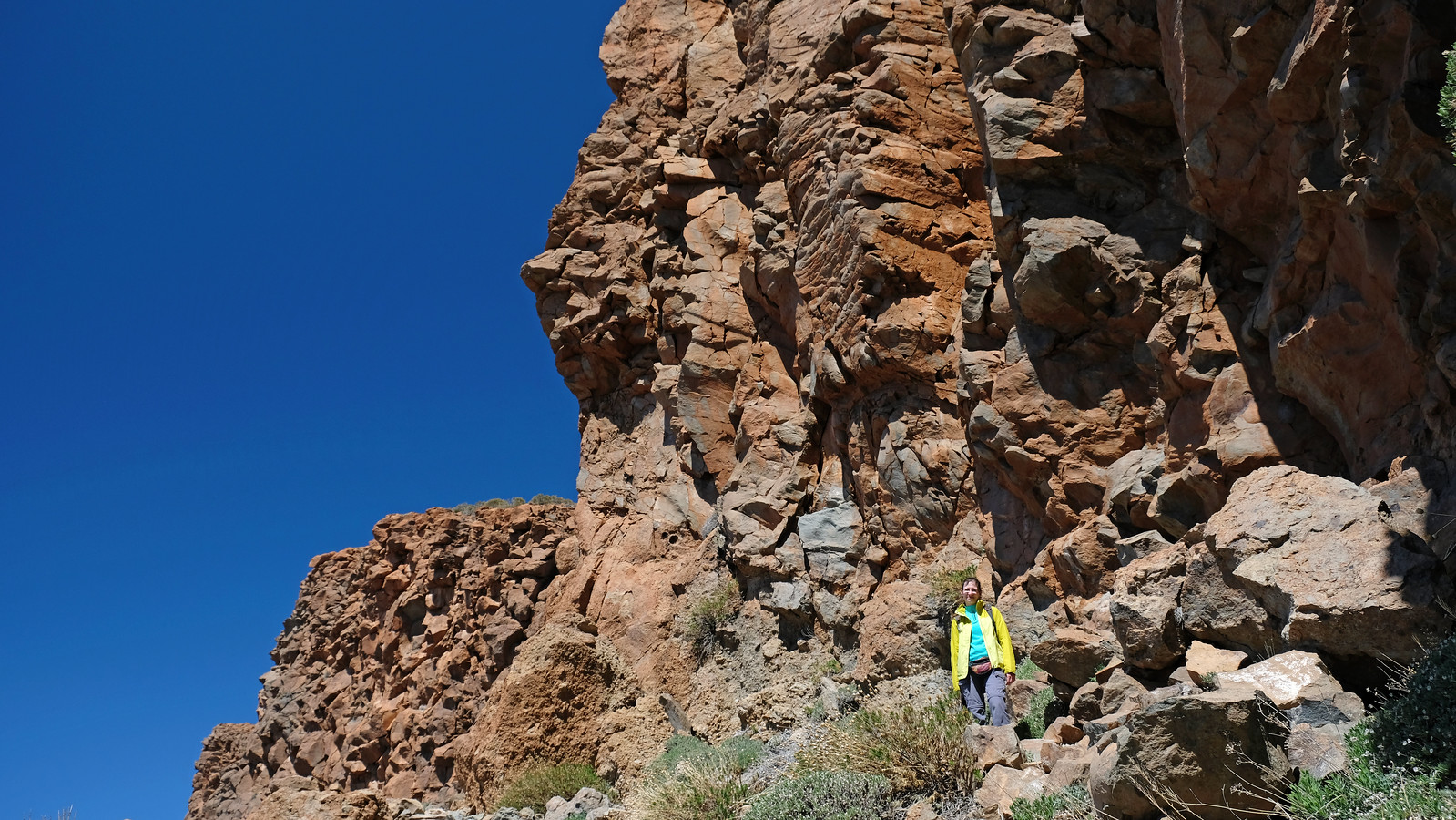 The very first section of the trail (until the first crossing) was the same there and back, and it’s almost flat. Then it started to ascend, but very mildly as we hiked along the giant petrified lava field in front of El Teide. It was a red-brown landscape with some thick, thorny plants and some picturesque rock formations.

Then came another crossing where we really started to ascend, leaving the lava field further and further below us. The view of El Teide followed us almost all the way on this trail – a majestic sight we couldn’t get bored of.

It was a perfectly clear day, but as we hiked up I noticed some clouds building up in the distance. There was no need to worry about rain though, because they stayed below us. It’s the phenomena called the “Sea of Clouds” – the effect of El Teide that clouds build up on most days at around 1600-1700 metres altitude. It’s not just a fascinating sight, but it helps separate Teide’s continental mountain climate from the subtropical climate of the coast.

So we could see the higher mountains and plains as we hiked upwards, but below them was the thick blanket of white clouds hiding the coastline. Like a trail leading to heaven? I know, I’m a bit dramatic, but I loved this hike and the panorama so much. And Montaña Guajara does offer a special 360 degrees panorama!

Back down to the visitor center 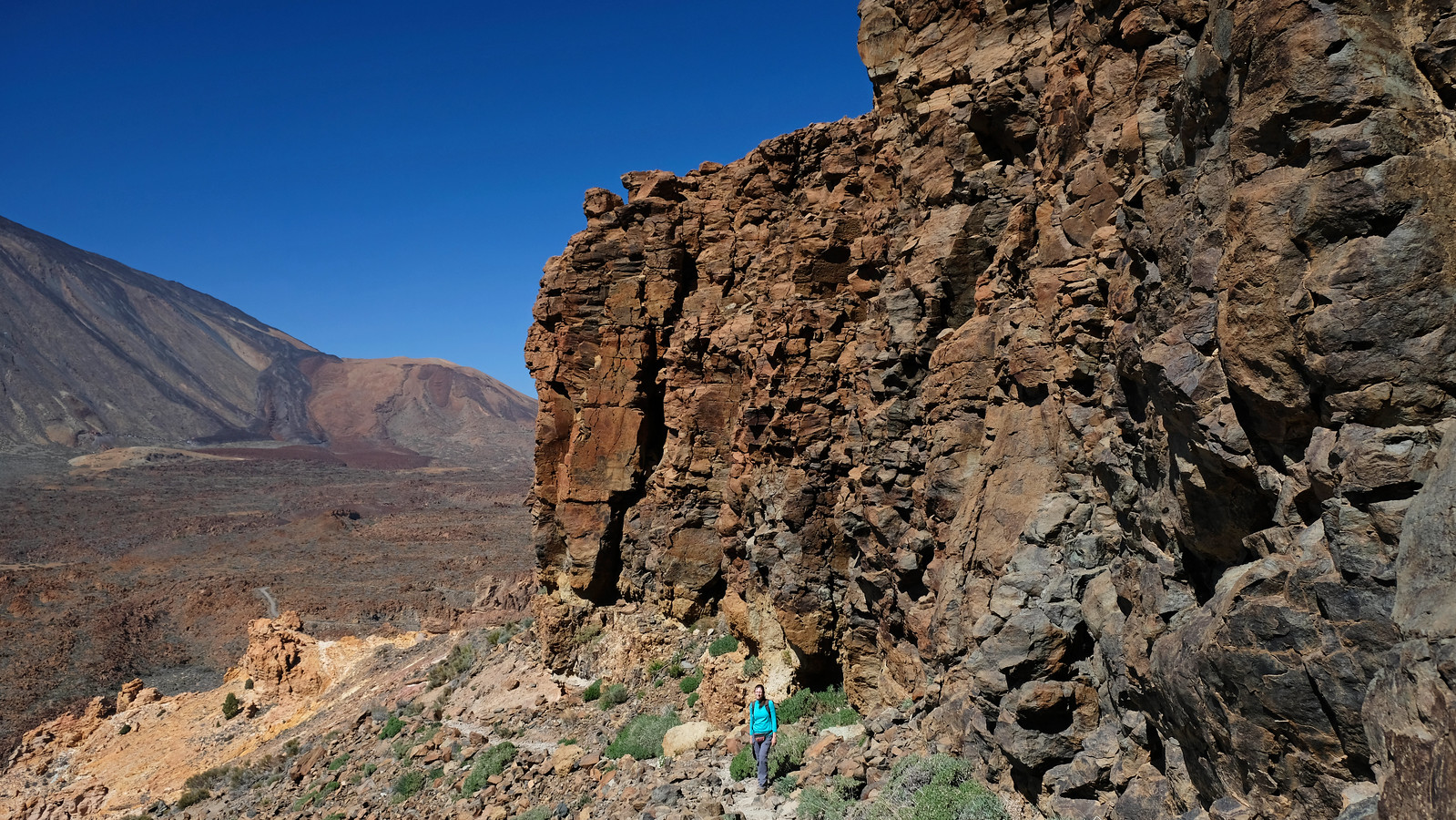 From there we started to descend on another trail, so we literally ended up making a circle around Montaña Guajara. It was a relatively steep trail, decorated with pretty basalt rock formations and spring wildflowers (it was the end of March). Finally, the last easy section was the same path where we started our hike, and it took us back to the visitor center. 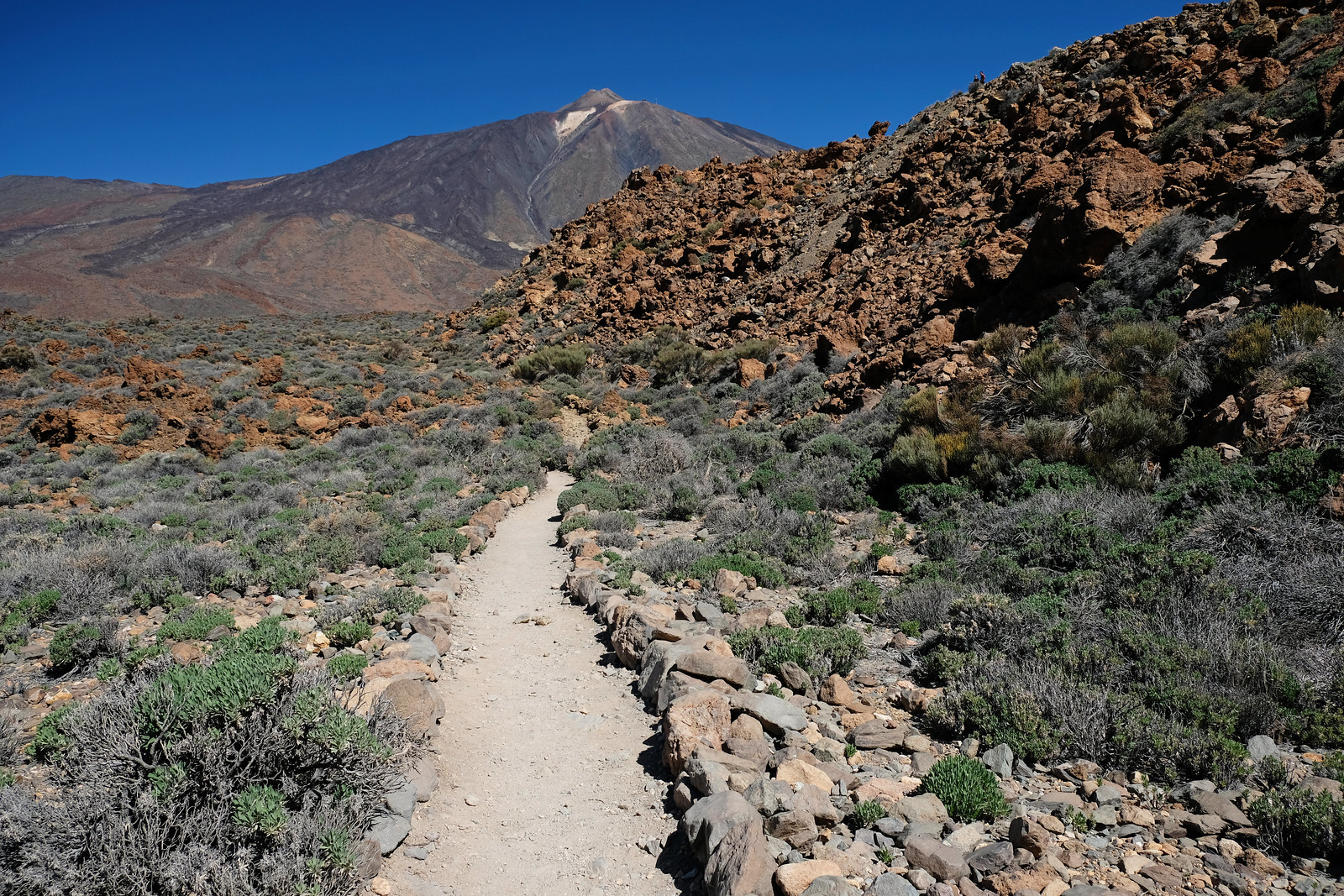 Though it was a full day hike for us with 1.5 years old Tomi, an average hiker might comfortably complete it within 5-6 hours. What if you’re looking for a shorter trail? Then Roques de García Circuit might be for you – we’re working on the hiking guide for it, and will publish it soon.