I was doing a research about waterfalls in Slovakia. Because one can never get enough of pretty waterfalls, right? At least we can’t. So we were happy to figure there’s a large waterfall in that part of the High Tatras we haven’t been yet. Naturally, it became the main scene of our next weekend getaway.

The 80 metres tall, two tiered Kmeťov Waterfall is among the most beautiful ones in Slovakia. And it’s located in a similarly beautiful valley: Kôprová Valley (or Kôprová dolina as they call it in Slovak). That was the place we were heading after we left our car in the huge (and almost empty) parking lot in Podbanské.

Kôprová Valley, another fairy tale valley of the High Tatras 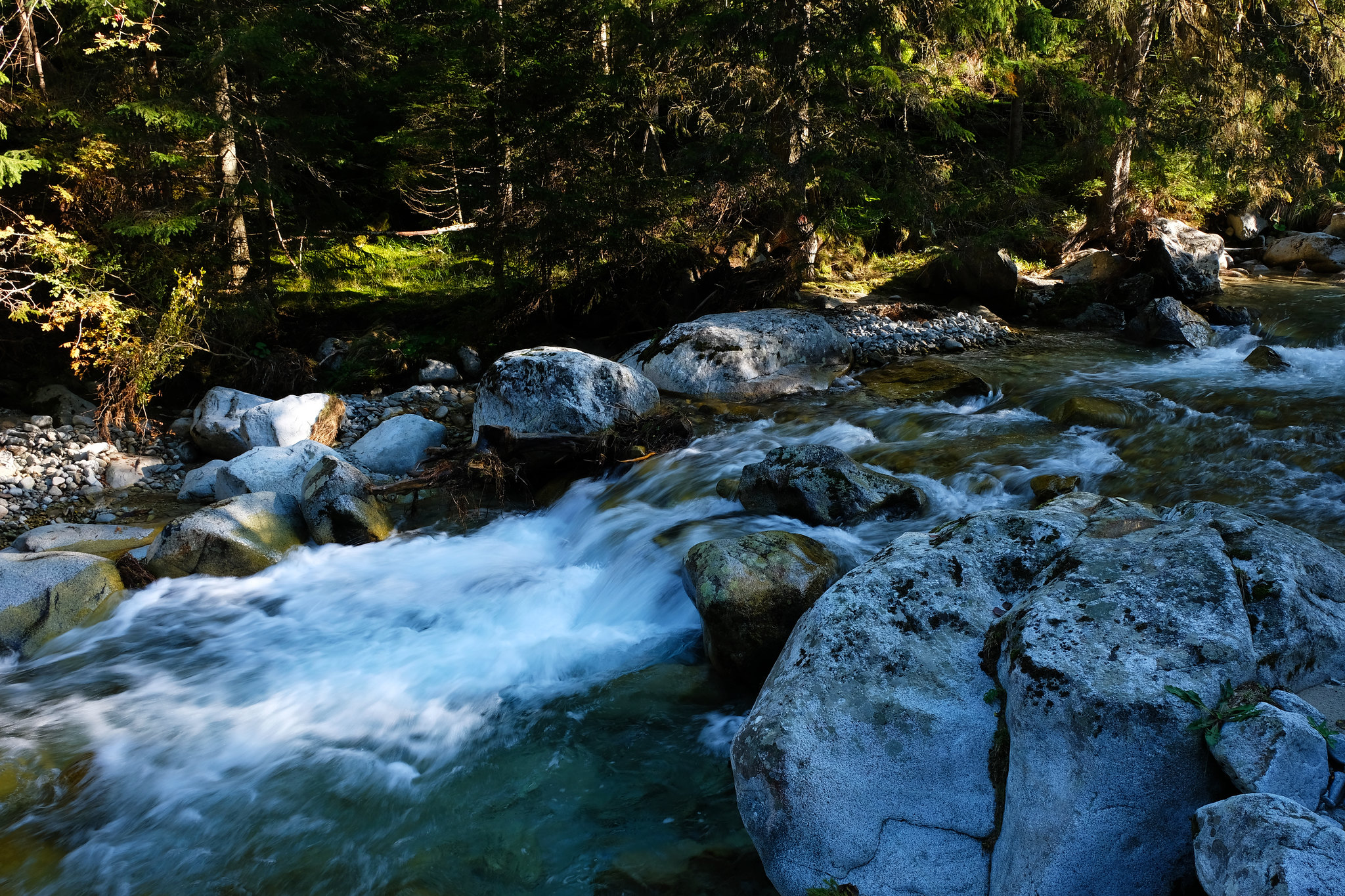 Our wonderful memories from the Mylnická and Furkotská Valleys, and from the Small and Great Cold Valleys set our expectations high. But the Tatras never disappoint (except when we can’t see ANYTHING in the dense fog, but that’s another story).

Kôprová Valley is further from the central region of the High Tatras. It’s not that well-known, and therefore not too busy. That few hikers we met on the way were all Slovaks – or curious Hungarians like ourselves. 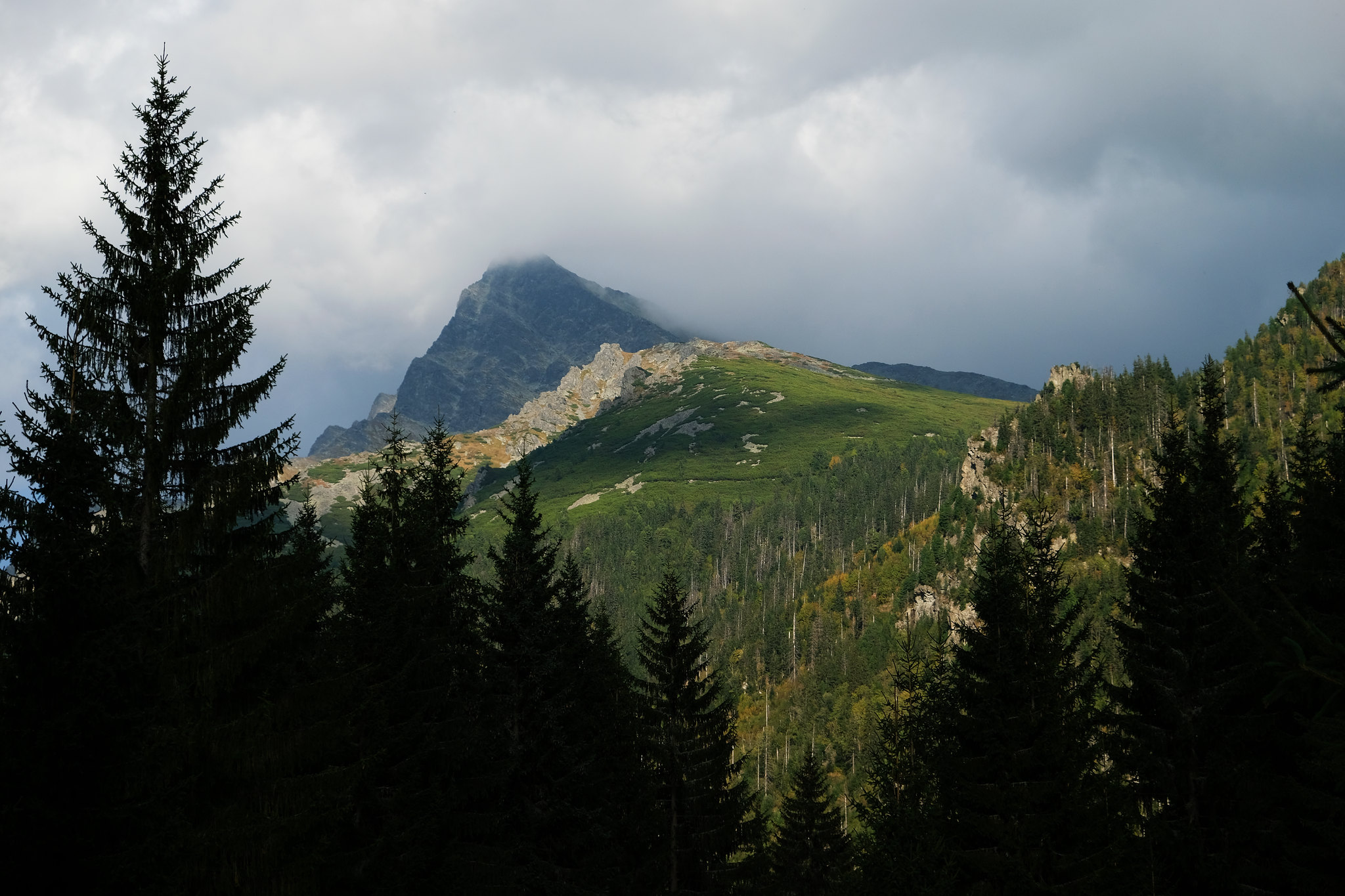 The lovely forest trail offered views of some distant peaks quite soon. One of those peaks were easily recognizable: Kriváň, the uniquely shaped national symbol of Slovakia. But it was worth looking around, too, not just looking up. Our path ran along a pretty, crystal clear mountain streams with lots of small cascades and fabulous green pools. 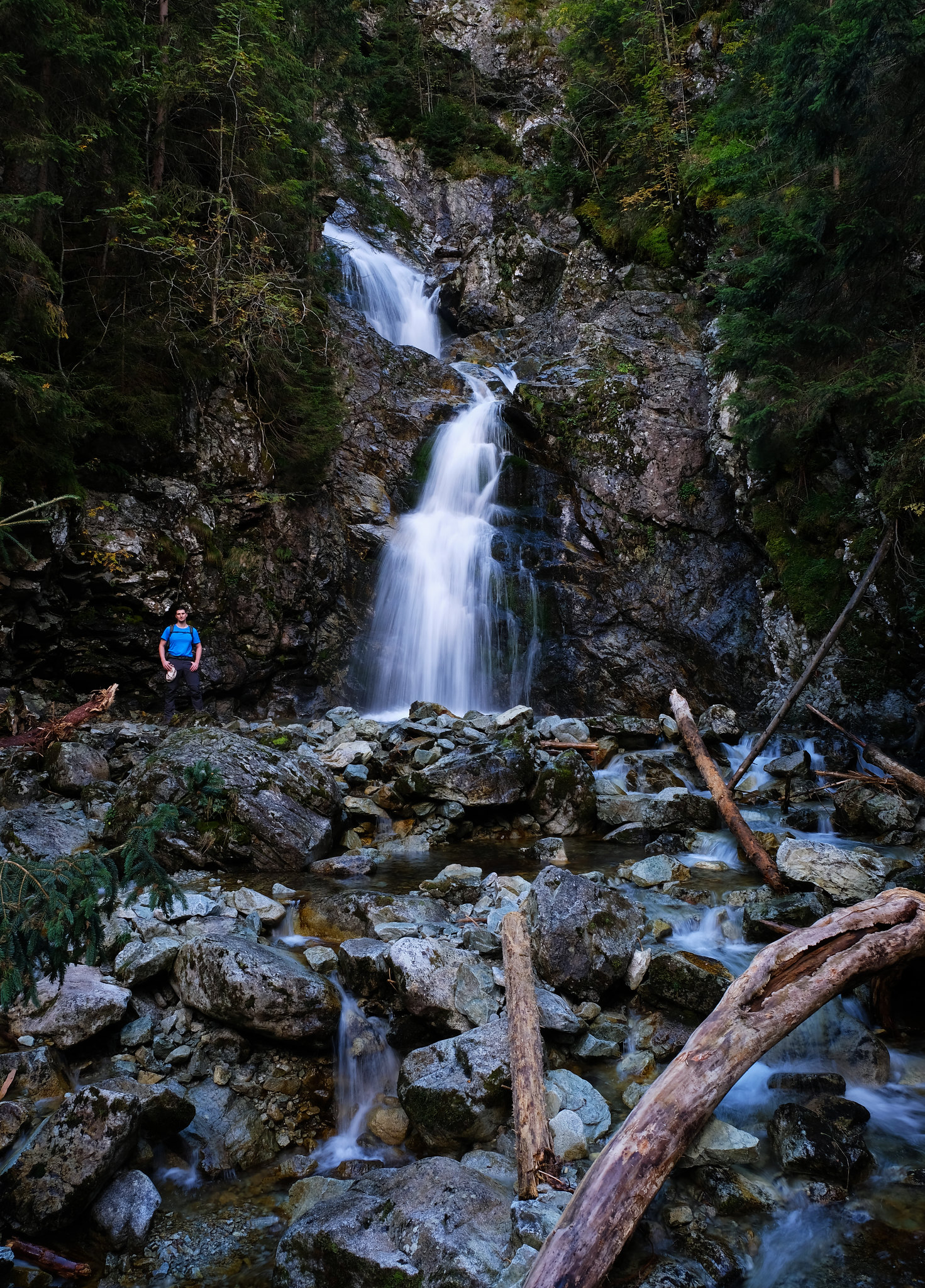 After about 3 hours we reached Kmeťov Waterfall. There’s a bike route all the way there, so you can be faster if you have a bike. Either way, the waterfall is a perfect rest stop. It’s worth walking up all the way to the top of the platform, since half of Kmeťov Waterfall can’t even be seen otherwise.

My only problem there was that it’s impossible to take a picture of the whole waterfall. I know. 😀 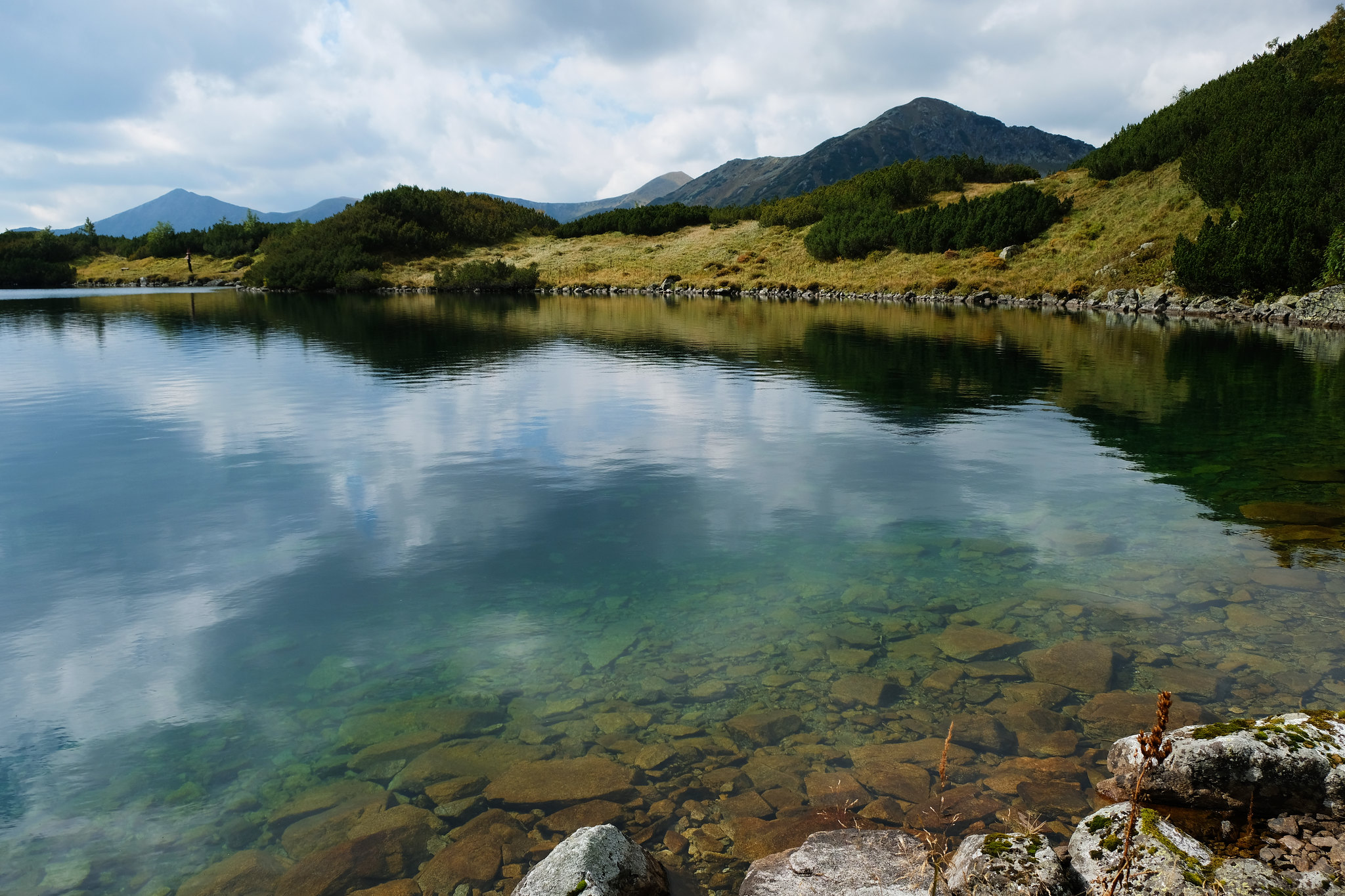 The hike to Kmeťov Waterfall and back is a pleasant half-day hike. But we couldn’t stop there. And we were right. Because we found the most beautiful section of Kôprová Valley after we left the waterfall, and headed towards barely pronounceable Nižné Temnosmrečinské pleso. Pleso means lake in Slovak. And whenever we see pleso on the hiking map of the High Tatras, we get excited.

Well, Nižné Temnosmrečinské Lake was a good reason to get excited. After hiking all the way up in the sun-kissed valley, we got an astonishing view of dark peaks towering above a magically turquoise lake: 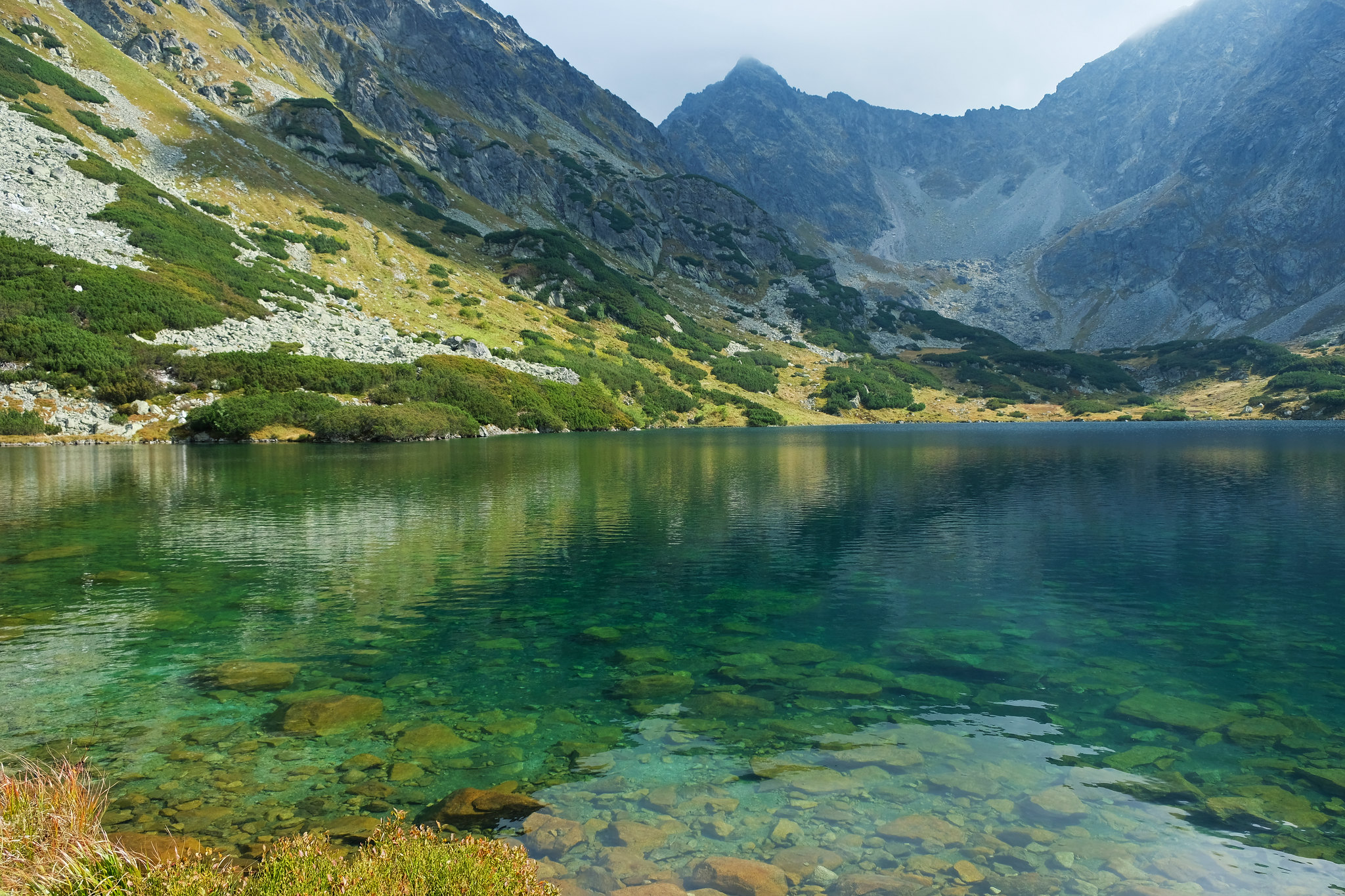 While eating peacefully on a bench right by the lake, we noticed some hikers following a narrow path around it. After taking a look at the map, it was obvious: the upper lake, Vyšné Temnosmrečinské pleso was very close. So instead of heading back, we were heading there, and reached it in about 20-30 minutes. 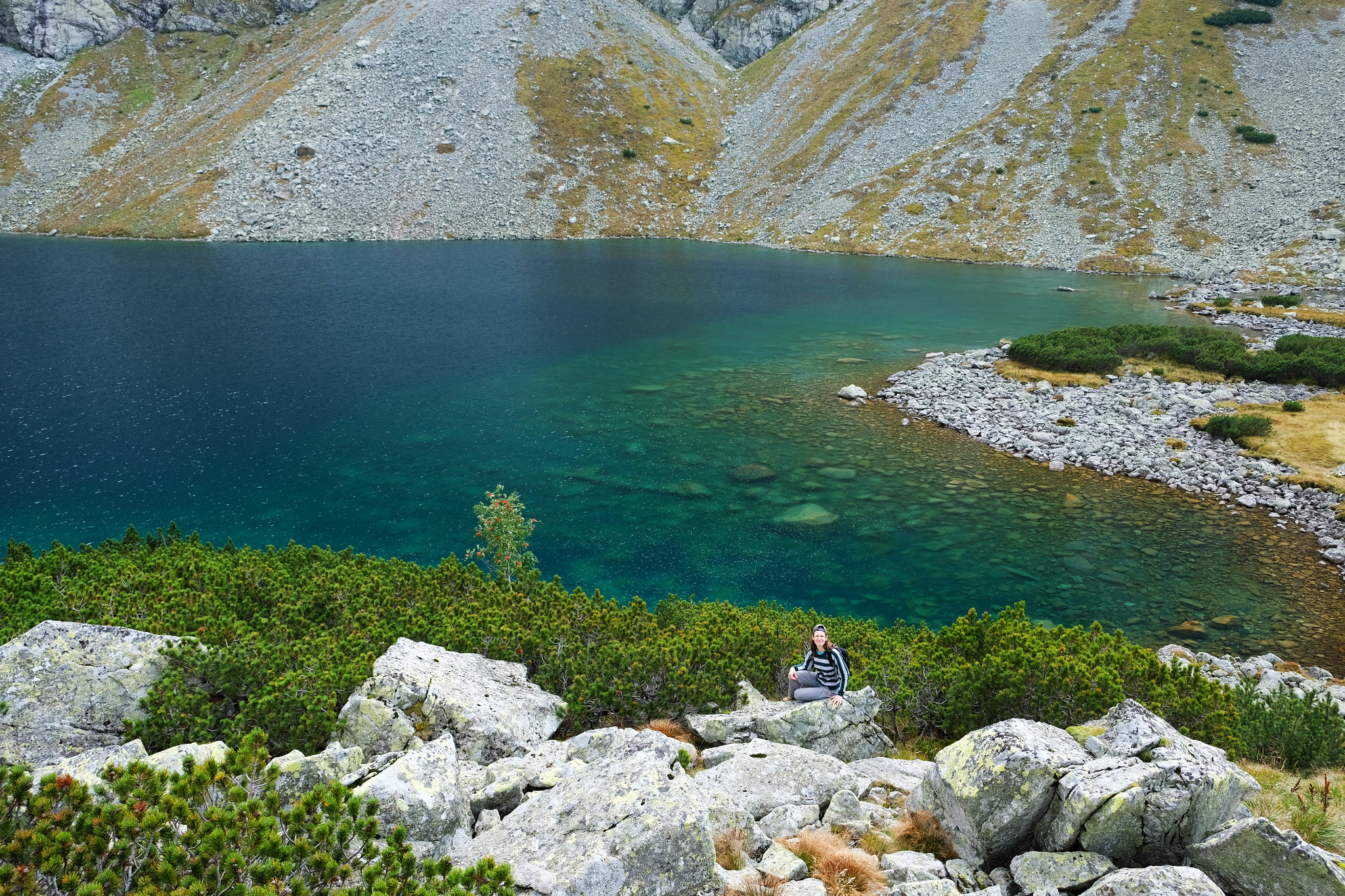 It was another place for a short rest since we needed time to take in the views and all the amazing shades of blue. Oh, I love being in the Tatras, especially in the sunny Tatras.

But Vyšné Temnosmrečinské pleso is truly the end of Kôprová Valley, so there was only one way to go: back. It took almost 4 hours to hike back to Podbanské. The route is not too steep, and from Kmeťov Waterfall it’s almost flat all the way. But it’s long. 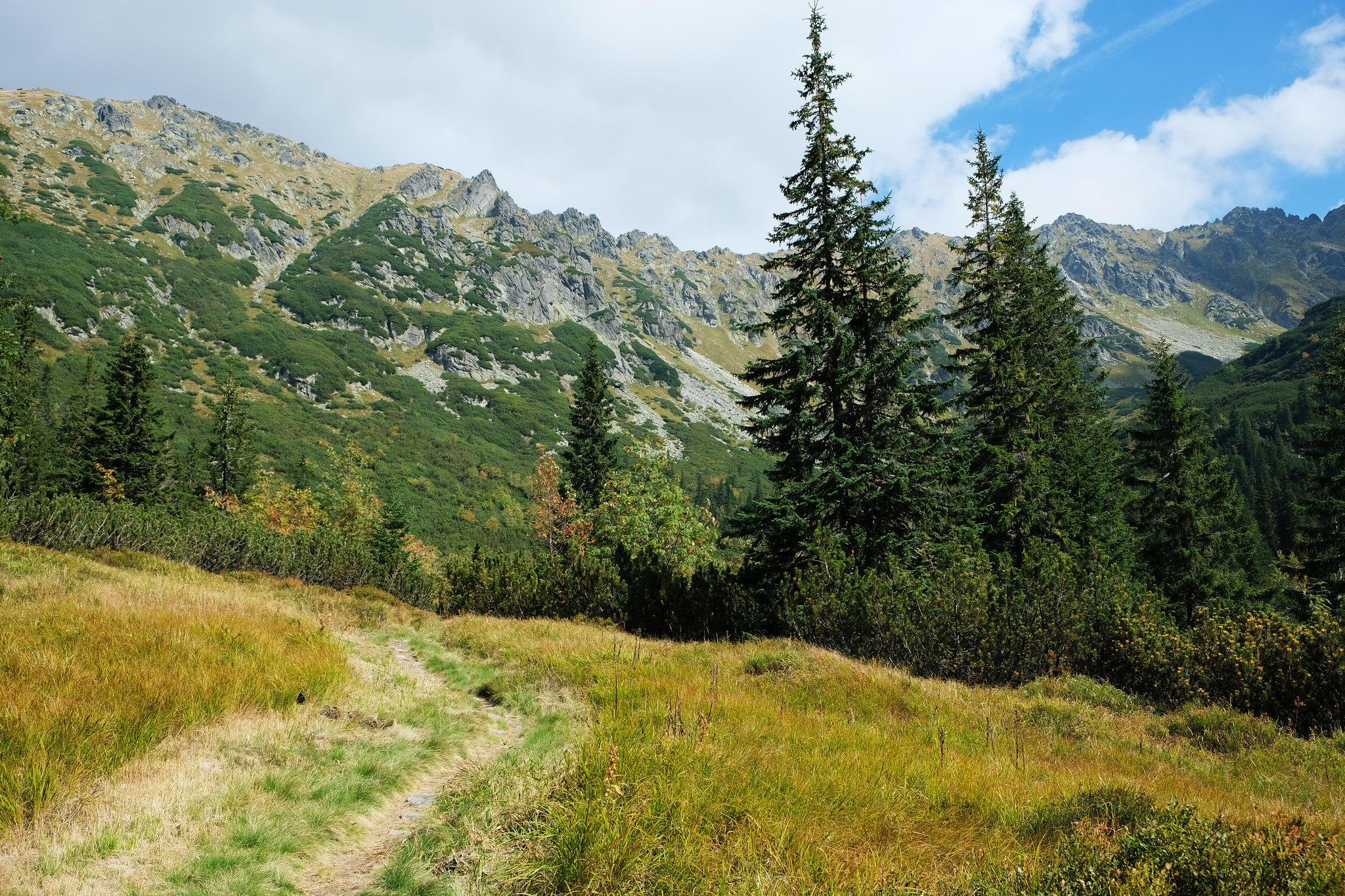 It looks like the Tatras still have surprises for us. Kôprová Valley was a very nice one. And we got sunny weather all day that’s also a rare surprise. 😛