Is It Hard Traveling With A Baby?

Is It Hard Traveling With A Baby?

Let me answer it plain and simple: it’s not traveling that’s hard with a baby, it’s everything. Life with a baby is hard. Traveling? It adds fun to the everyday challenges, and it creates unique memories, that’s what we think.

To no one’s surprise, traveling with a baby is quite different from traveling without one. But life is different, too, so how could we expect anything else being the same? People often tell us that it could be extremely tiring to be on the road with a baby. They’re right. But the truth is, being at home with a baby is also extremely tiring. And I’m much more motivated to get up at 6 am knowing that a fabulous beach or a giant mountain is waiting for us than to get up to an average day at home. (Not that there’s an average day with a baby…)

What does even count as traveling? 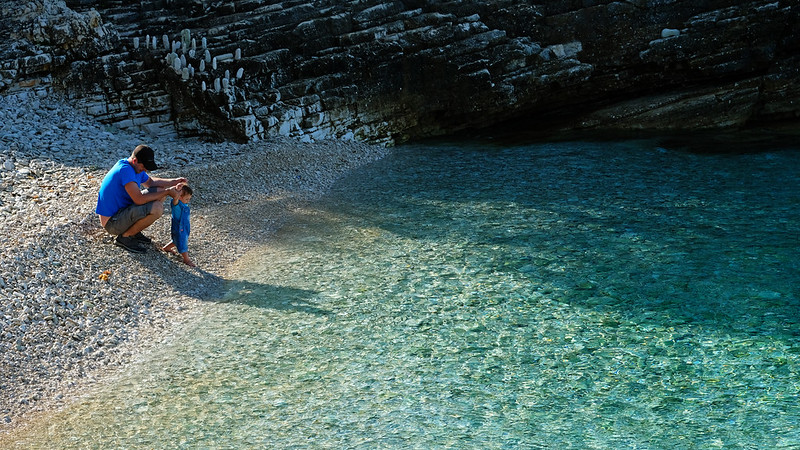 Have we really travelled so much with our baby boy in his first year? I guess, it depends whom we compare ourselves to and what we count as traveling. During the majority of 2020 even a short hike near our home felt like traveling. (And we did lots of hiking for sure.)

We haven’t traveled anywhere by plane with him yet. Sigh. 2020… and all that. But we did a two weeks road trip in Slovenia when Tomi was 10 months old. We took him hiking since his fifth week (our accomplishment, not his, as you can guess, he slept through those hikes), first in the mountains in our home, Hungary, but then also in the Alps and the Tatras in our neighboring countries. We hiked to 2244 meters high Krn peak in the Julian Alps with him – also our accomplishment! 😀 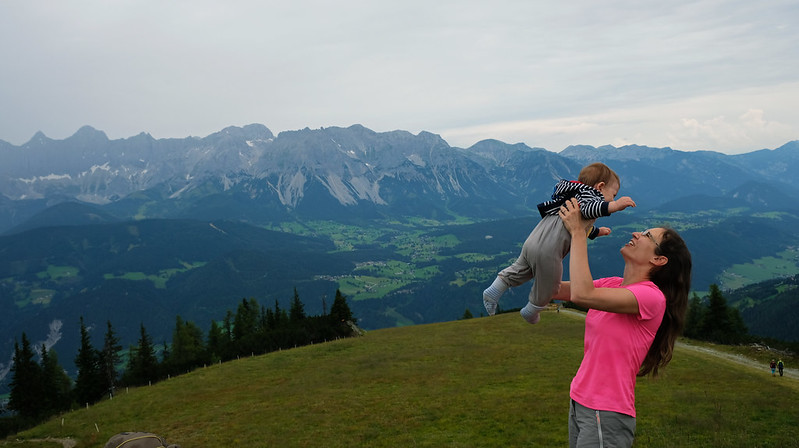 We also took him to Austria for a week when he was 12 months old. Then we spent an entire month with him in Croatia after his first birthday, starting in Istria and getting down to the Central Dalmatian coast. It was all so wonderful! Of course, tiring, too. 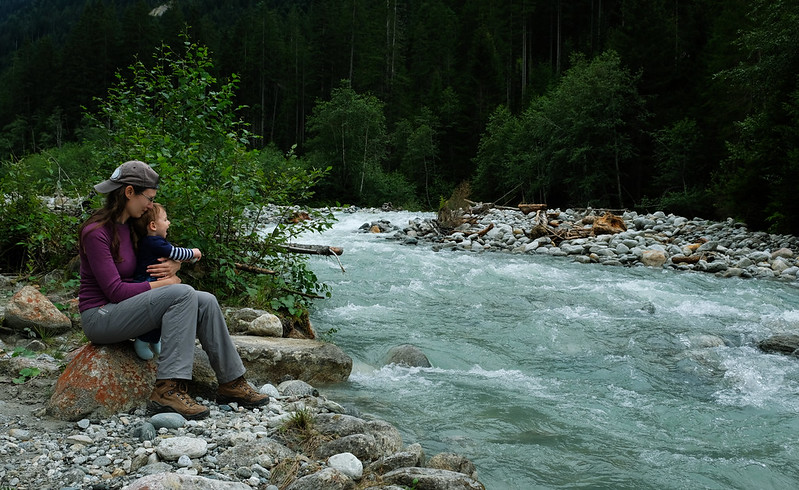 Our experience during these road trips with Tomi is that we have just as many challenges on the road as at home, only they’re different.

Like putting him to sleep is a challenge at home, but we have no problem with it when on the road. He’s either on Csaba’s back in the carrier or sitting in the car, and he can fall asleep easily when he gets tired (and he does). Fresh air also has something to do with those good sleeps, I guess. 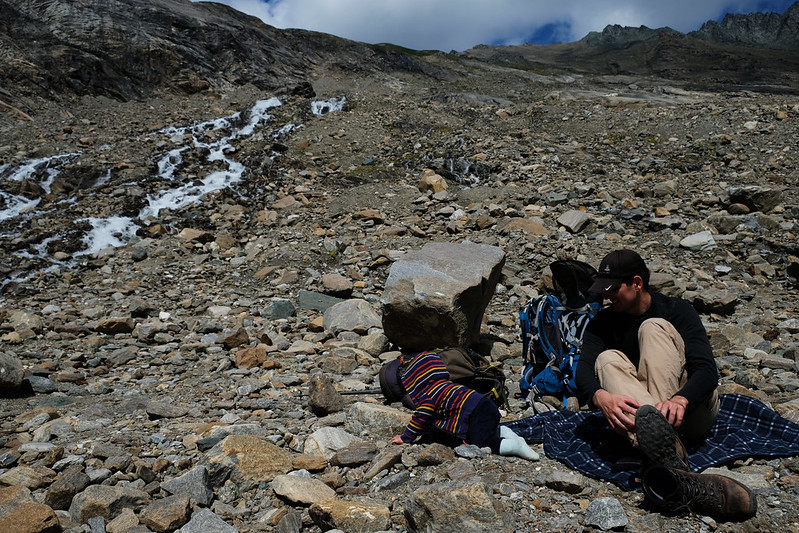 Long drives on the other hand are new challenges. We need to plan our road trips in a way that we don’t drive more than a couple of hours a day, because it’s usually 1.5-2 hours that Tomi is able to spend in the car without a long rest stop when he could finally move (crawl/walk).

Night sleeps are challenging no matter where we are. In his first year he was in our bed during the night, so it didn’t really make a difference for him if it was a different double bed as long as we were there. If anything, his sleep might be better when we are on the road, because he gets more tired, spending the entire day outdoors. 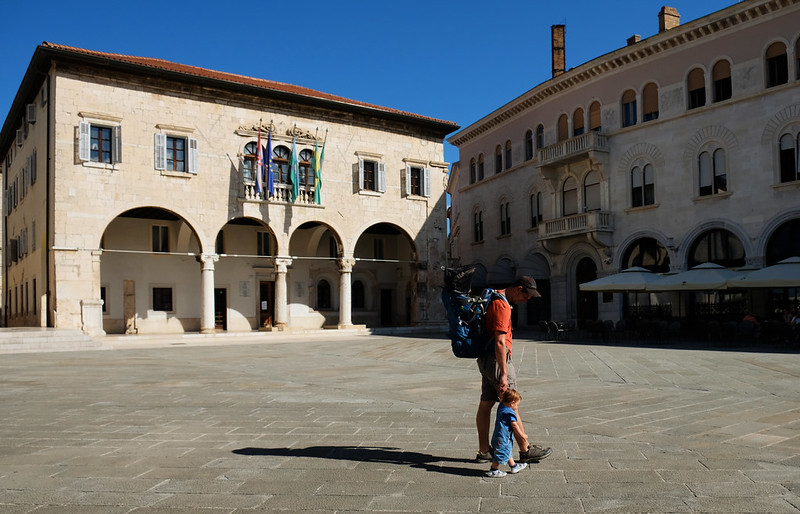 Bathing him was more challenging when we didn’t have his own little bathtub. But by the time he turned one, he got to like bathing in any bathtub or taking a(n assisted) shower anywhere.

Then there’s no chores or cooking to do while on the road, so we can spend more time together. We have a usual daily routine, it’s just different from the one that we have at home. Or is it really? As far as Tomi’s concerned, I’m not that sure. He gets his meals in time, he gets his daytime naps, and the rest is “play and explore the world” time. It’s only his environment that’s different, but he still has the two of us, and it looks like that’s what really matters.

Do we travel with a lot of stuff? 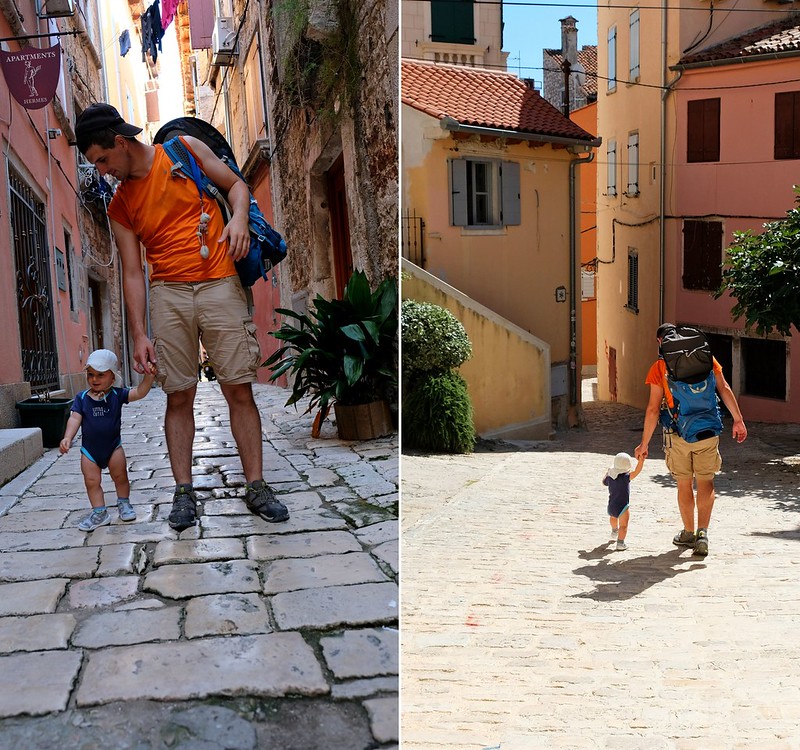 So far we’ve travelled with our own car, a small Suzuki, so you can have a guess. (No – correct.) And before you ask, we don’t mind. We used to travel within Europe with a single carry-on backpack. We are minimalists at home, too. We knew that having a baby wouldn’t mean we buy whatever everyone says to be absolutely essential.

So we don’t have too much stuff to start with – only what we think is necessary for us. And we can give up on most of those for a few weeks while we’re on the road. Like Tomi’s bath tub (that we don’t even use at home since then) or high chair. The most essential thing we have for him on the road is the carrier. Now that we have a carrier backpack instead of a mei-tai carrier, it takes up some space. But other than that we only have his clothes (more than necessary, so that we have spare ones), the nappy kit and a few toys. 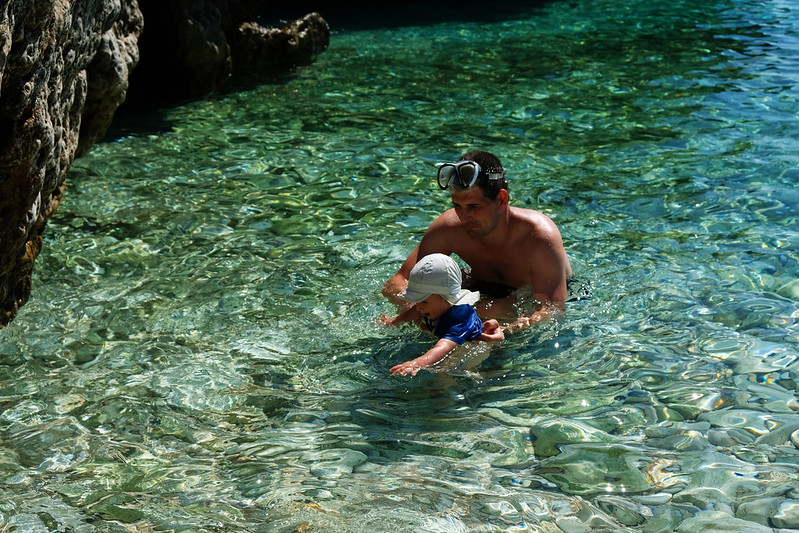 By the way, the countries we visited with Tomi were all incredibly kid-friendly, including accommodations. A lot of them were equipped with everything that makes your stay more comfortable with a baby. However, it looks like the term “kid-friendly” means a bit different for everyone, so in case you have a specific need, it’s worth double-checking with the accommodation.

Are our trips different?

Well, yes, our lives are different, after all. Our travels change as Tomi grows. In the first six months, he didn’t care wherever we went with him. We carried him, and he slept a lot even during the day. We planned fewer things and shorter trails than before, but nothing else changed much. Sightseeing, hiking, even museum visits or meeting with friends was all fine. 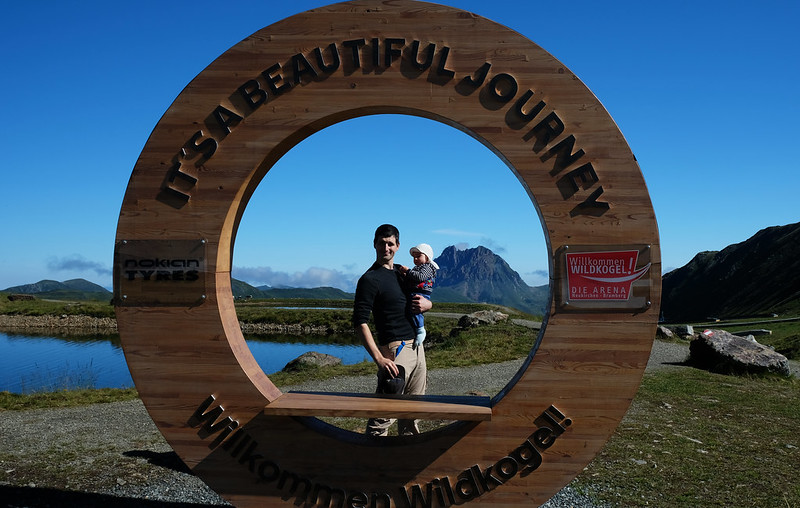 As he started spending more time awake, then crawling, standing up and walking, he started paying attention to his surroundings more, and we couldn’t carry him all day long anymore (not that we could, anyway… he is getting heavy!). But until he actually learned to walk on his own, still not much changed. We planned 30-60 minutes long breaks during our travel days, we put down a blanket in the forest or in a park, and let him crawl around a bit before we carried on with the day.

Museums were out of the question in this period, though – ironically, most of them were closed, anyway. 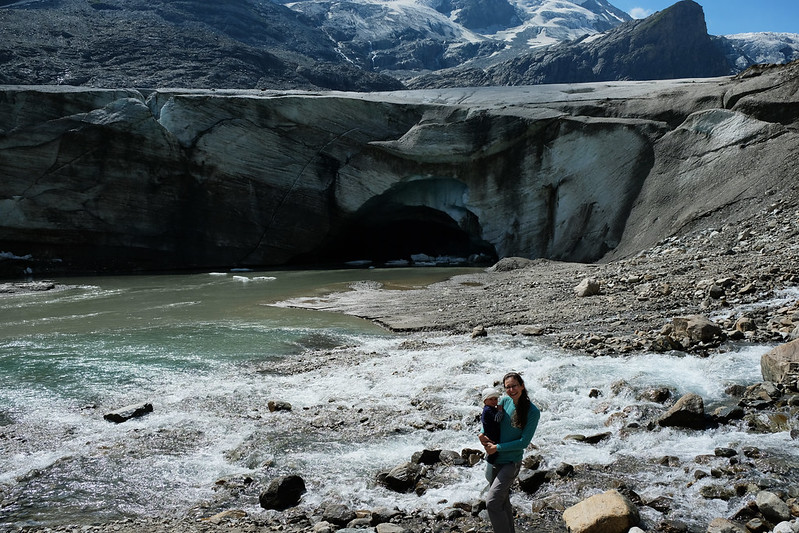 Then he turned one and learned to walk. We can get to nowhere ever since. 😛 Okay, another try. This is the most challenging period so far, because he can and he wants to walk – just usually not in the direction we plan to go. We quite quickly gave up on persuading him otherwise. He enjoys walking up and down the stairs (and up and down and up and down…), chasing pigeons, examining sticks and leaves (and rubbish, too, that people just throw away on the streets), following a dog or another kid.

We soon learned that the best strategy is being patient during his explorations, and then when he gets tired, we put him into the carrier and actually get somewhere and see things. As long as we calculate with these longer “do nothing” pauses during the day, we can still do sightseeing or hiking, only with a slower pace. 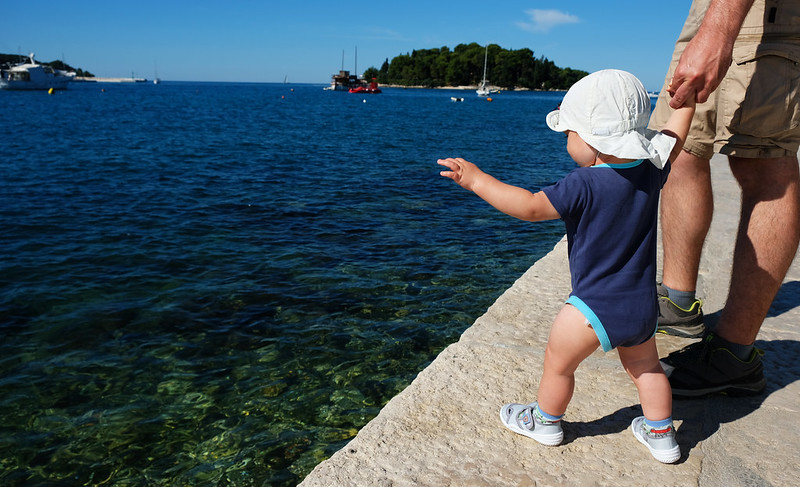 So our travel days are in constant change with him – and they will be. While he learns to adapt, we’re forced to adapt, too. We change together. It’s life as a parent, isn’t it? And we believe it makes us more, all of us.

Note: it’s all peace and happiness in all the pictures, for the simple reason that people take photos of their happy moments. 🙂 You bet we had challenging ones, as well.

Have you traveled with your baby? How was it?