So we promised to write about what to do in Croatia beyond its beaches and Dubrovnik, and this post is another in the bunch to fulfil that promise. Paklenica National Park is actually located on the Dalmatian coast, so you can easily combine visiting it with beach days.

And why visit it? Because you have to see the most astonishing karst river canyons in Croatia! Well, not only see them, but hike through them – or climb their giant rock walls. Paklenica National Park is for hikers and climbers, and those activities are the way to really get to know this park.

It offers about 200 kilometres of marked hiking trails, but the most popular are by far the ones that run in the two astonishing canyons, Velika and Mala Paklenica (Big and Small Paklenica in English). So let’s see whether they are for you – and if not, then what is? 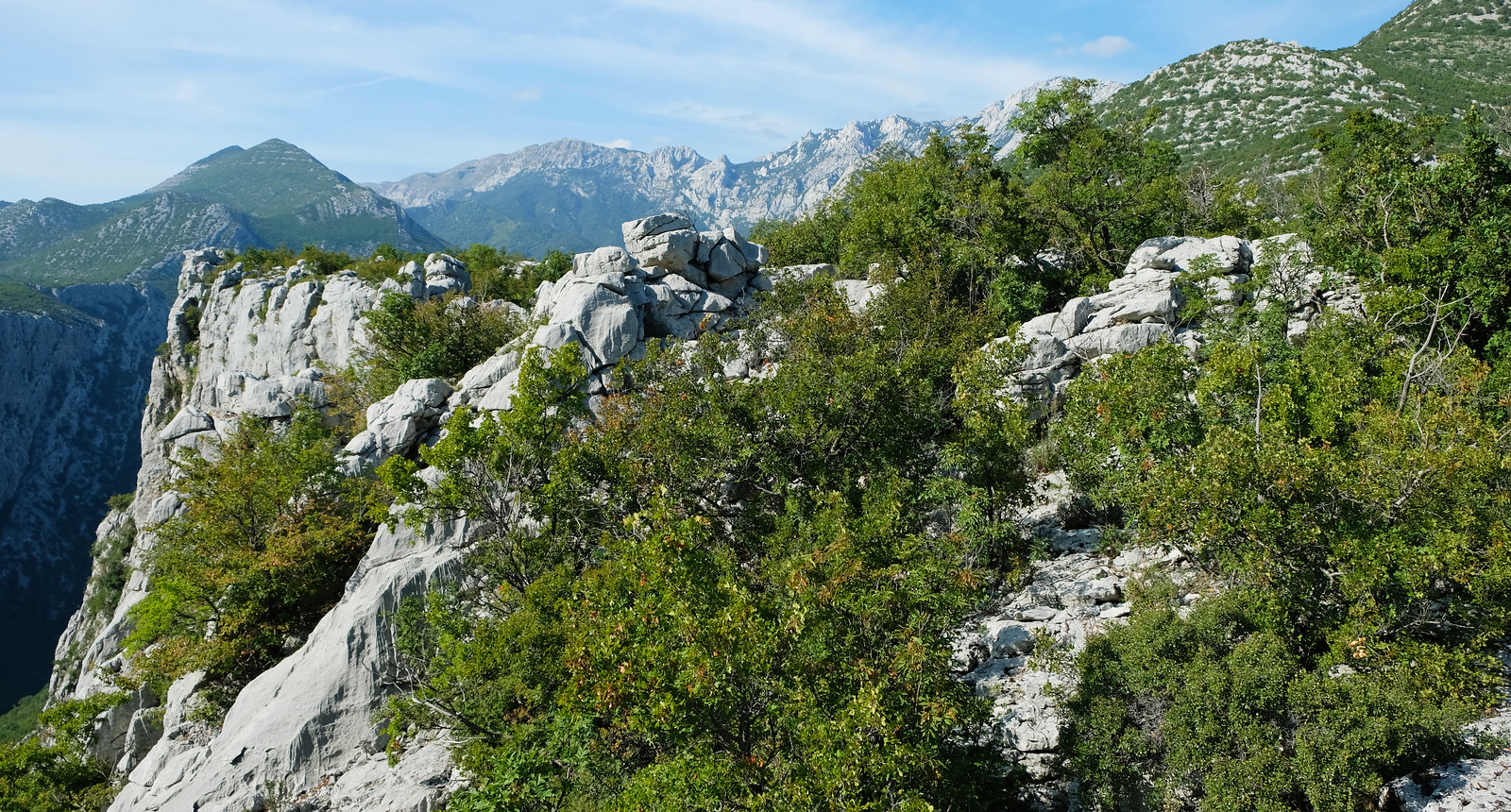 The park is located in Northern Dalmatia, on the southern slopes of the Velebit mountain range. It’s suitable for a day trip from Zadar, but the closest coastal town to the park is Starigrad Paklenica where you find the official entrances.

Entrance 1 at Velika Paklenica is the main entrance with a large paid parking lot, while Entrance 2 at Mala Paklenica is a smaller entrance that’s only open in the main tourist season (mostly in the summer). Which entrance to use? You can buy tickets at both entrances (see the prices here), but unless you want to start your day hiking up in Mala Paklenica, go to Entrance 1.

We entered at Entrance 2, and then left the park at Entrance 1 after a long, tiring day completing the full loop trail through Mala and Velika Paklenica canyons.

Which canyon to choose for hiking? The big, the small or both? 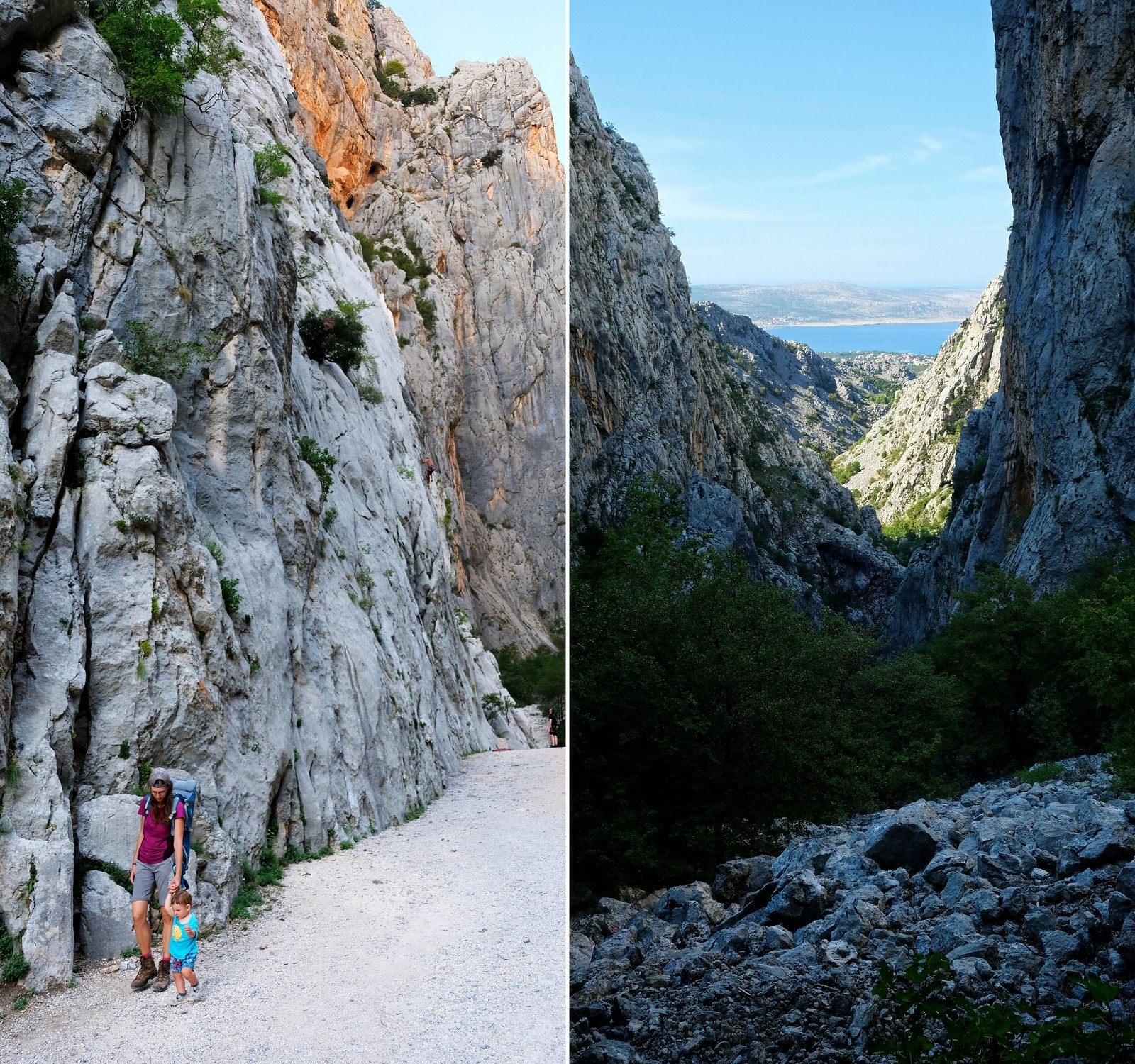 You can do both Mala and Velika Paklenica as a loop, and it can fit in a long summer day. But the question is whether you are ready (=fit and experienced enough) to do them.

The trail through Velika Paklenica is the easier one. It’s wide, and it ascends evenly, occasionally with some stone stairs. It only gets narrow and steep towards the end of the canyon, but it’s still manageable with a bit of caution – and the views are worth it (do I even need to say this?).

In case you’re a climber, you find about 500 established climbing routes in Velika Paklenica canyon, ranging from short and easy to long and hard ones.

So Velika Paklenica is great for families, climbers and not too experienced hikers who prefer a scenic, but not too technical trail. You can do it there and back, and that would take most of your day.

Mala Paklenica on the other hand is for experienced hikers only! It’s not only steep, it’s technical, too. (We did it, and we did it with our 1 year old Tomi in the carrier backpack which was definitely not a good idea, but more on that later…)

Long story short is: Mala Paklenica is not for you, if you’re not comfortable with hiking on challenging alpine routes, or you’re not in a good physical condition, or you’re with a small kid (including one in the carrier). And if you think it’s for you, then you can do a loop through Mala and Velika Paklenica canyons which takes a full day. We advise you to start it in Mala Paklenica canyon as it’s the steeper one, hence it’s easier to do upwards.

Our full day loop through Mala and Velika Paklenica canyons 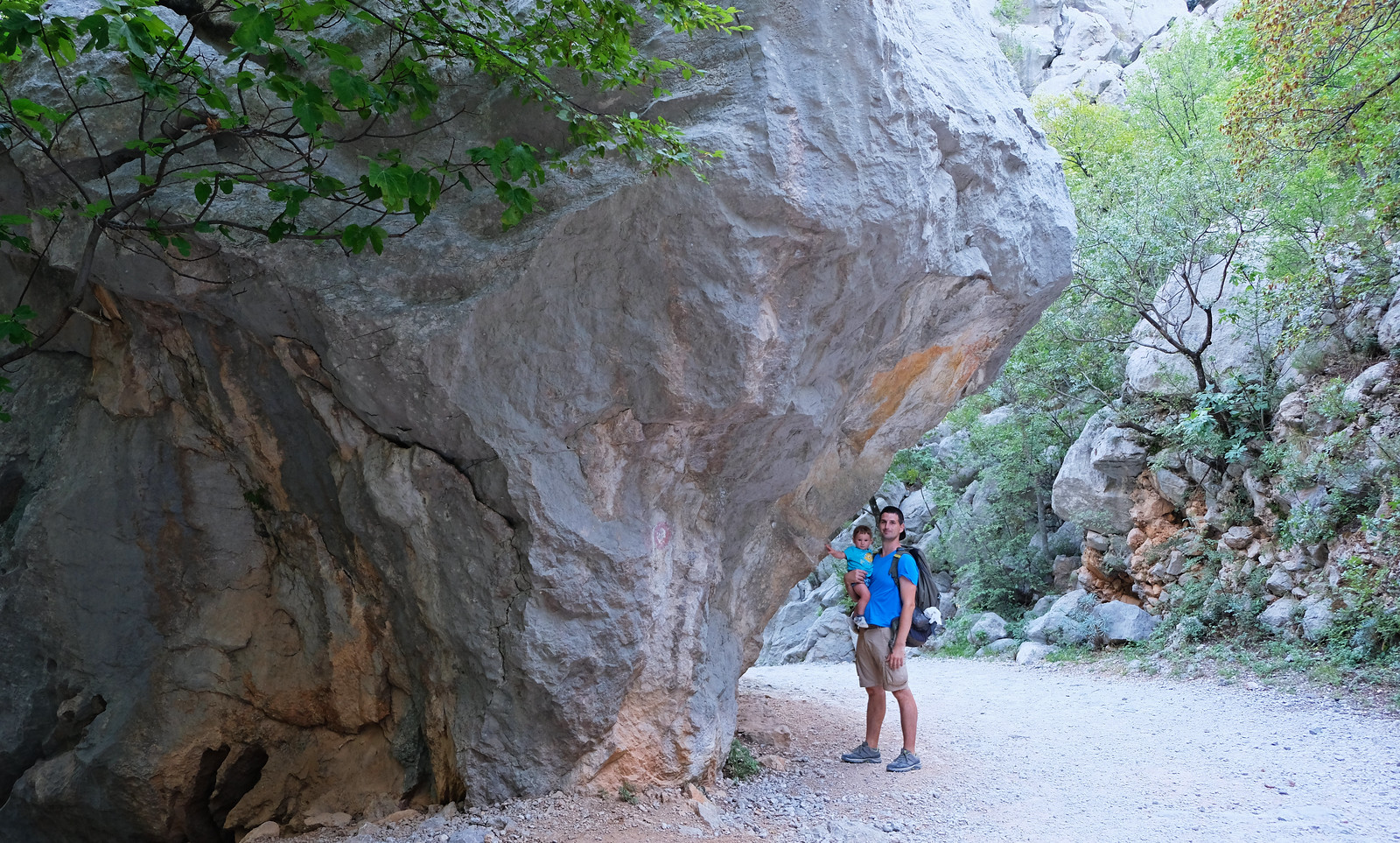 So they say Mala Paklenica is strenuous and is recommended for experienced hikers only. We read the warnings – and we’re experienced hikers, too. That’s probably the reason that we’re a bit used to taking those kinds of warnings lightly. You know, there are lots of popular trails that people try to conquer in flip-flops or without food and drink, and these warnings try to make them realize that these are actually hiking trails, not the seafront promenade.

We saw tons of these warnings and did these trails in Europe throughout the years, and our conclusion was usually that they’re quite okay, if you wear proper hiking boots and have some experience on mountain trails. Some were more challenging, but we still enjoyed the challenge. Mala Paklenica would have been the latter – hadn’t we been there with our baby.

Up in Mala Paklenica 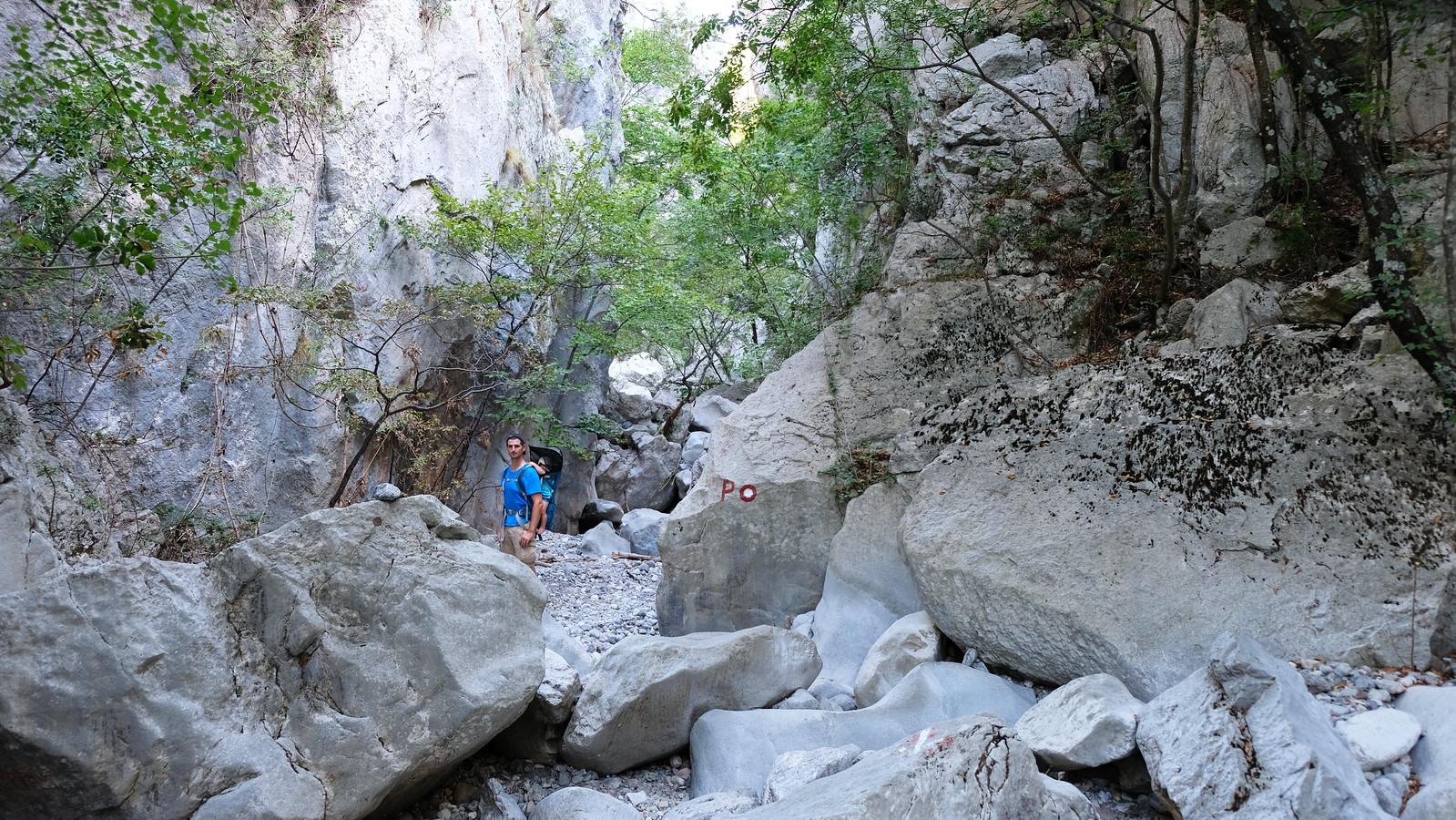 But with Tomi in the carrier backpack, hiking up in Mala Paklenica ended up being more worry than fun. This route is full of giant cliffs that you literally have to climb – using your legs and your hands, and your sense of balance. It’s hard with a baby in the carrier in the first place. Also, your sense of balance is not the best when a 1 year old is fidgeting on your back. It’s not like carrying a heavy backpack (which is also challenging on a route like this, by the way), because this one moves, and you have to be very-very careful not to hit it to the rocks while you climb.

Thankfully, no one got hurt, and we got lots of dramatic views while conquering Mala Paklenica, but it was far from being fun. Without Tomi, it would have been. With him, we were just looking forward to reaching the end of the canyon in safety. We didn’t even dare to turn back, because it’s easier to fall if you hike down on a route like this.

If this would have not been enough, Tomi was also getting impatient in the carrier. He just learned to walk a week before this hike, and he wanted to practice his new skills. So everyone was happy to get our view of Mala Paklenica finally from above.

The plateau between Mala and Velika Paklenica 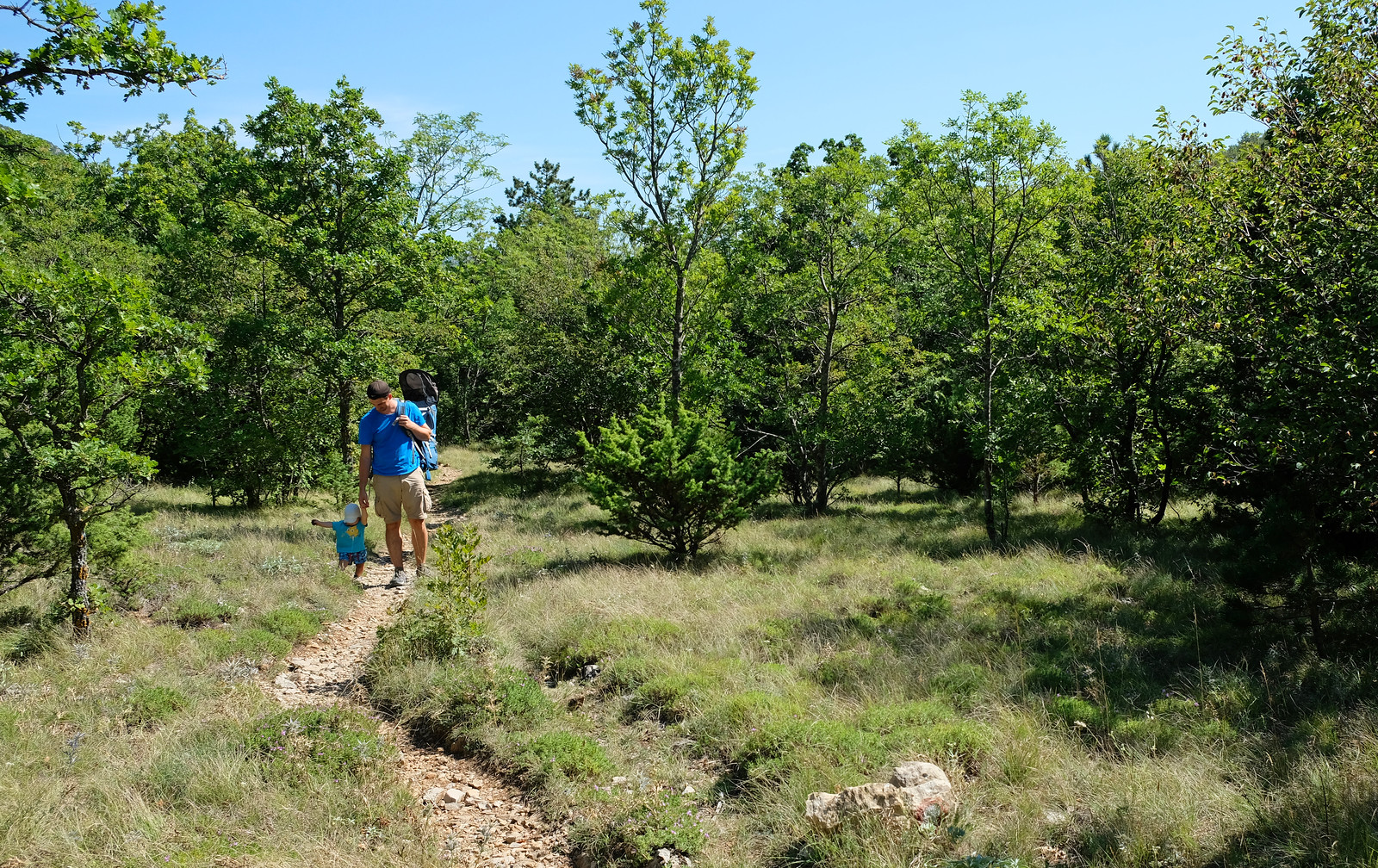 The trail that connects Mala Paklenica with Velika Paklenica runs on a plateau. It offers some pretty views of Velebit, and it’s easy for the most part. Here was the chance for our enthusiastic 1 year old to walk on his own – and he did. Part of the trail runs through a wooded-bushy area and flowery meadows, and it was such a nice, relaxing walk after the hard climb in Mala Paklenica.

Down in Velika Paklenica

Then we reached the top of Velika Paklenica, and it was time to put Tomi into the carrier again. It wasn’t nearly as technical as the trail in Mala Paklenica, but it was quite steep and narrow in the beginning. Then it got wider and smoother, and our boy had the chance to hike on his own again. This was really a hiking trail without the need of climbing rocks and using your hands. Still it was just as scenic as the route through Mala Paklenica. 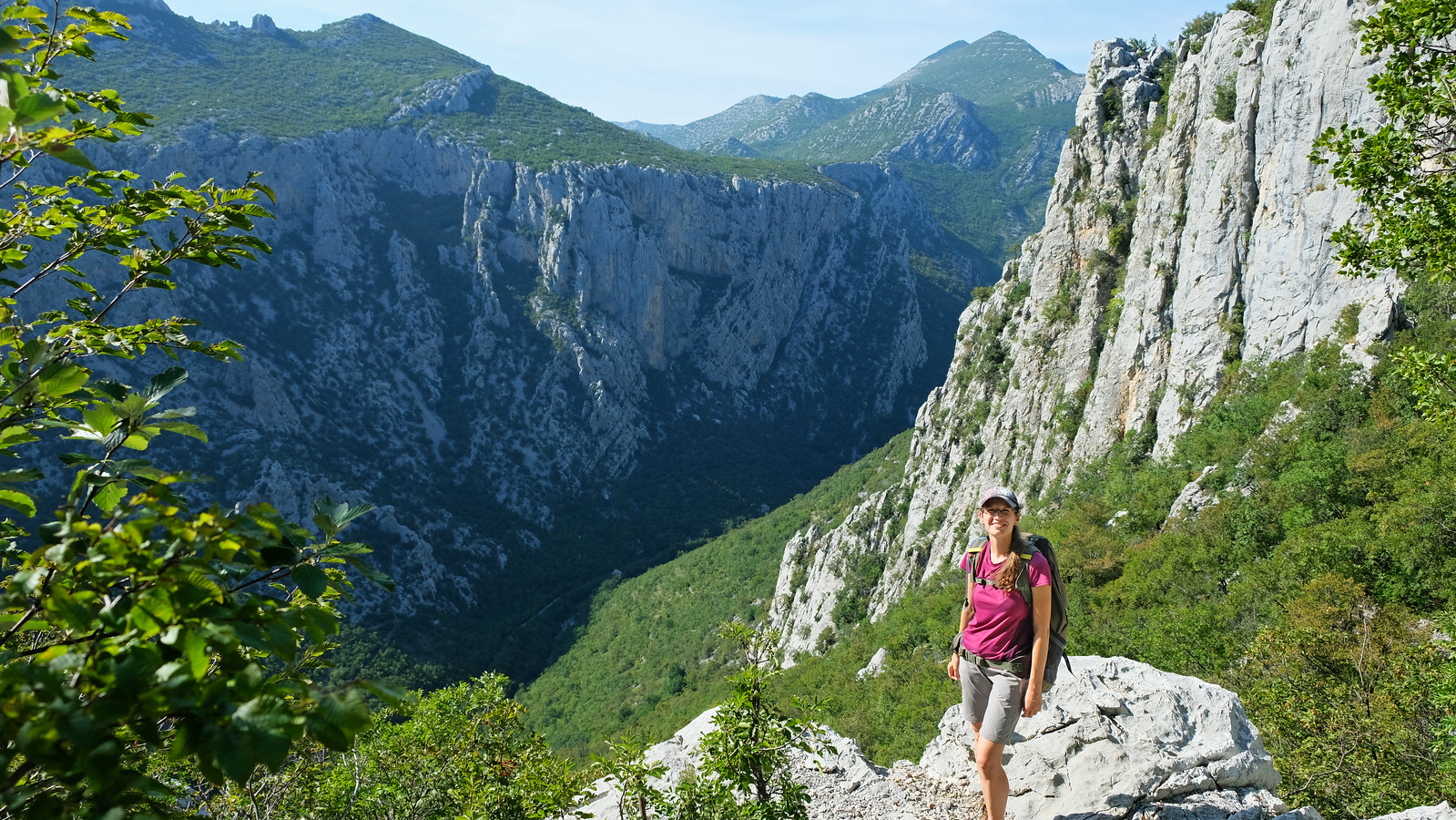 The last section (or the first if you start at Entrance 1) of the Velika Paklenica trail is even paved and almost flat. It connects the two parking lots near Entrance 1, so it’s not too busy either. We haven’t used any of the parking lots though, we walked to the park from our accommodation in Starigrad Paklenica.

Manita peć cave and other trails

Another attraction in the park is Manita peć, a karst cave accessible on a footpath from Entrance 1 in about 1.5 hours. The cave is only open for a few hours each day, so you need to time your visit according to its opening hours.

There are other trails in the park, and you can get information about them at Entrance 1. Most of them lead you out into the wild, so they’re more suitable for multi-day trekking than a day hike. The highest peak in Paklenica is Vaganski vrh with 1757 metres.

What else to do in the region? 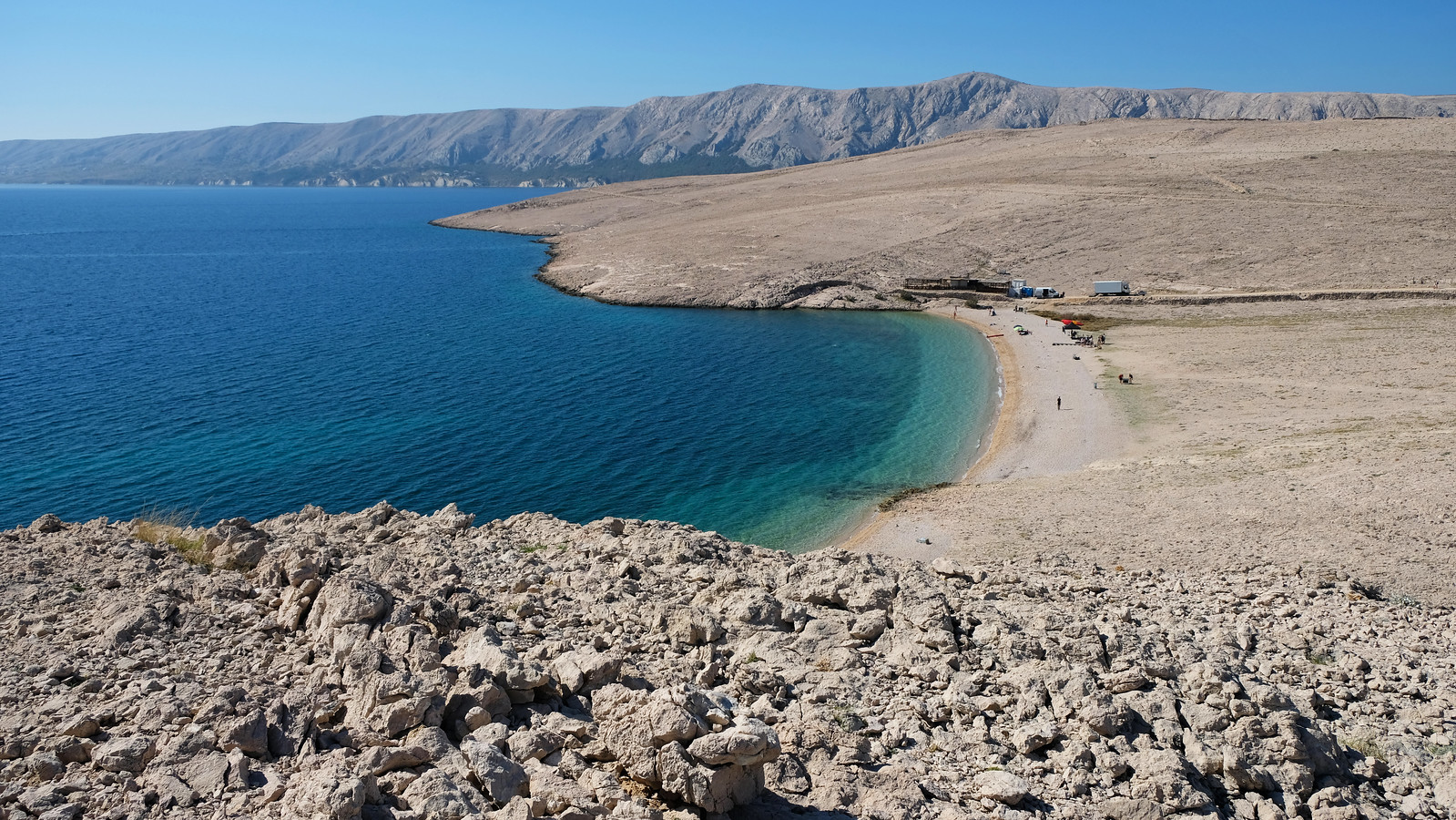 We spent one day in Paklenica National Park, and that was enough to do the loop hike through the two canyons. You can purchase multi-day tickets, if you want to hike more. If not, there’s plenty of other places to visit in this region.

Like the lovely old towns of Zadar or Šibenik. Krka National Park with pretty waterfalls. The nearby islands of Pag or Vir that are both connected to the mainland by bridges. Or Pisak-Kulina Beaches with their own ruined fortress in Starigrad Paklenica.