Have you ever conquered a real volcano? Have you ever got down to the bottom of its crater? Here’s your chance if you take the Cinder Cone Trail in California’s Lassen Volcanic National Park.

This not so well-known park was a great surprise for us. It was not one of the national parks we’ve always dreamed to visit, mainly because we didn’t know about its existence. But we couldn’t have been happier that we found it, and had one of our most special hikes there! Experiencing active volcanism in Lassen Volcanic was very special, because this was the first active volcanic area we’ve visited in our lives, and the same applies to actually conquering a volcano… 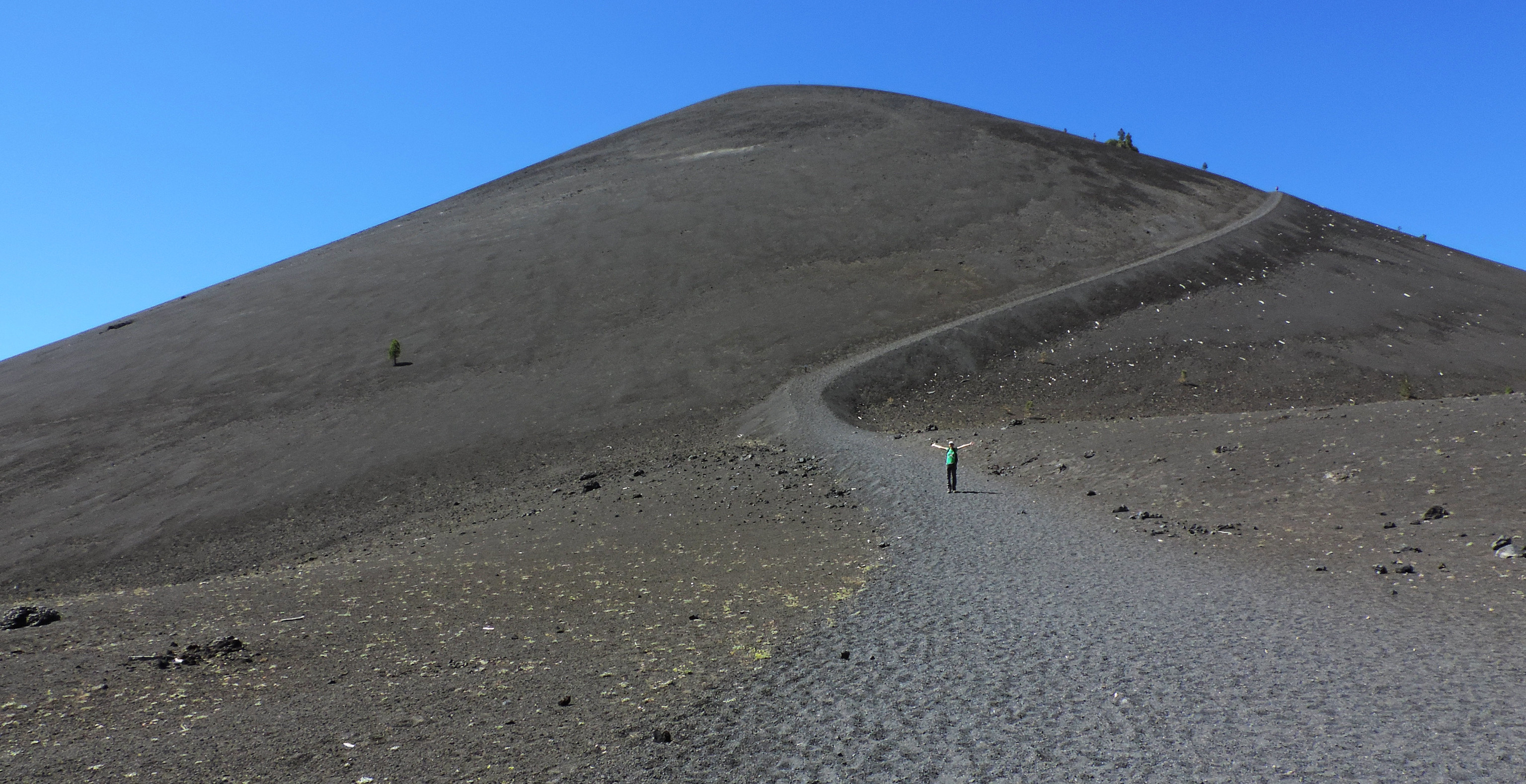 It’s one thing to know that a certain mountain is a volcano, and it’s another to actually notice it at the very first sight like it happened with Cinder Cone. Cinder Cone is both the name and the type of this volcano, and it really looks like the volcano you know from books and illustrations.

Its last (and only) eruption was in the 1600s, still very few plants can be found on Cinder Cone. It’s all small pebbles and grey volcanic ash. But there are the black lava beds and the Painted Dunes around it, formed by ash and lava. It’s such a unique landscape, dead and colorful at the same time.

Hike to the top of Cinder Cone 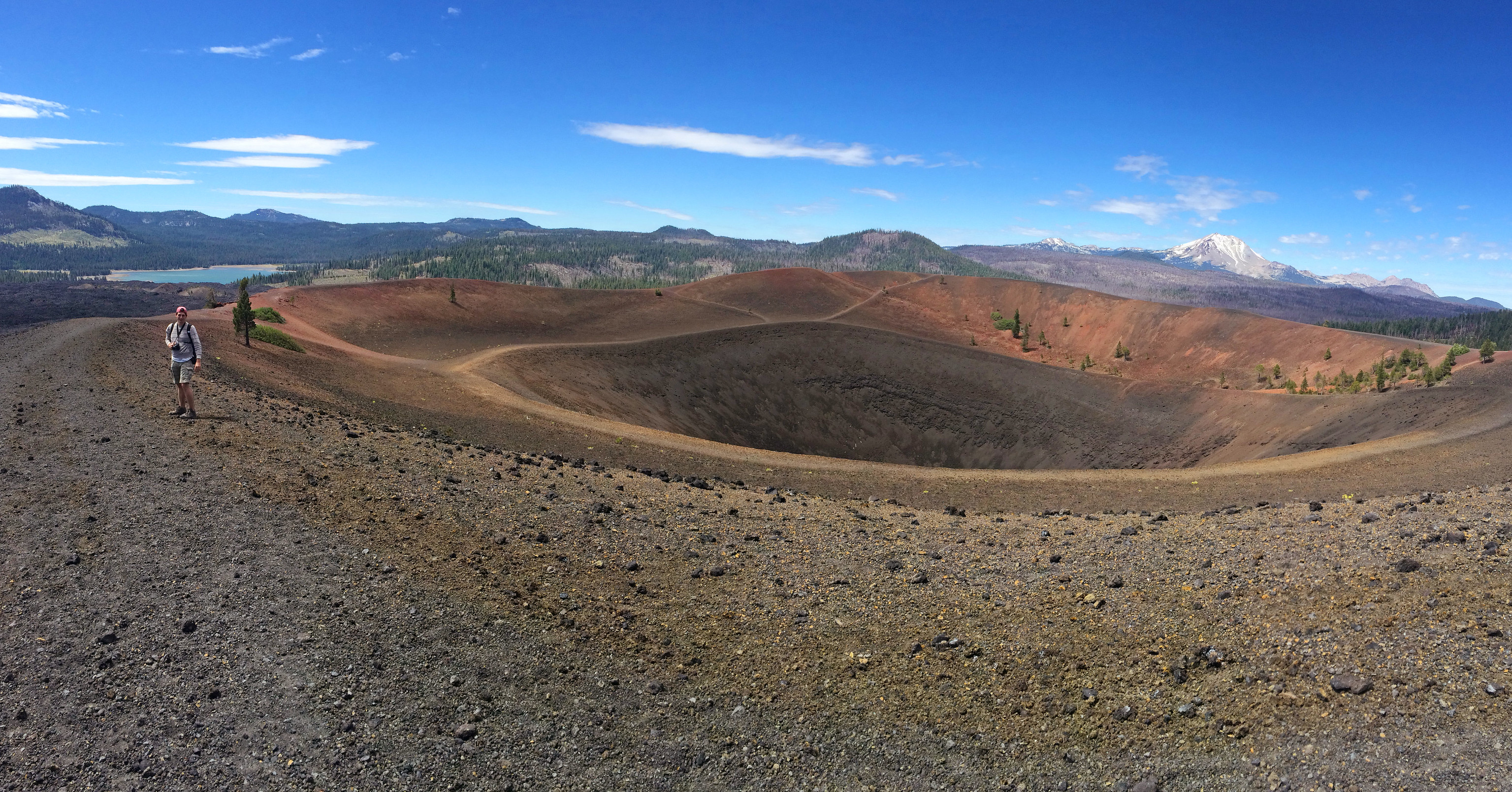 Hiking a volcano like Cinder Cone is a challenging and dirty adventure. We hiked in the soft and slippery ash, and it was surprisingly tiring. But reaching the top rewarded us with a view we’ve never seen so far: a close view of a volcanic crater. The panorama from above was not bad either: lakes, snowcapped peaks, lava beds and the Painted Dunes.

Get down to the crater 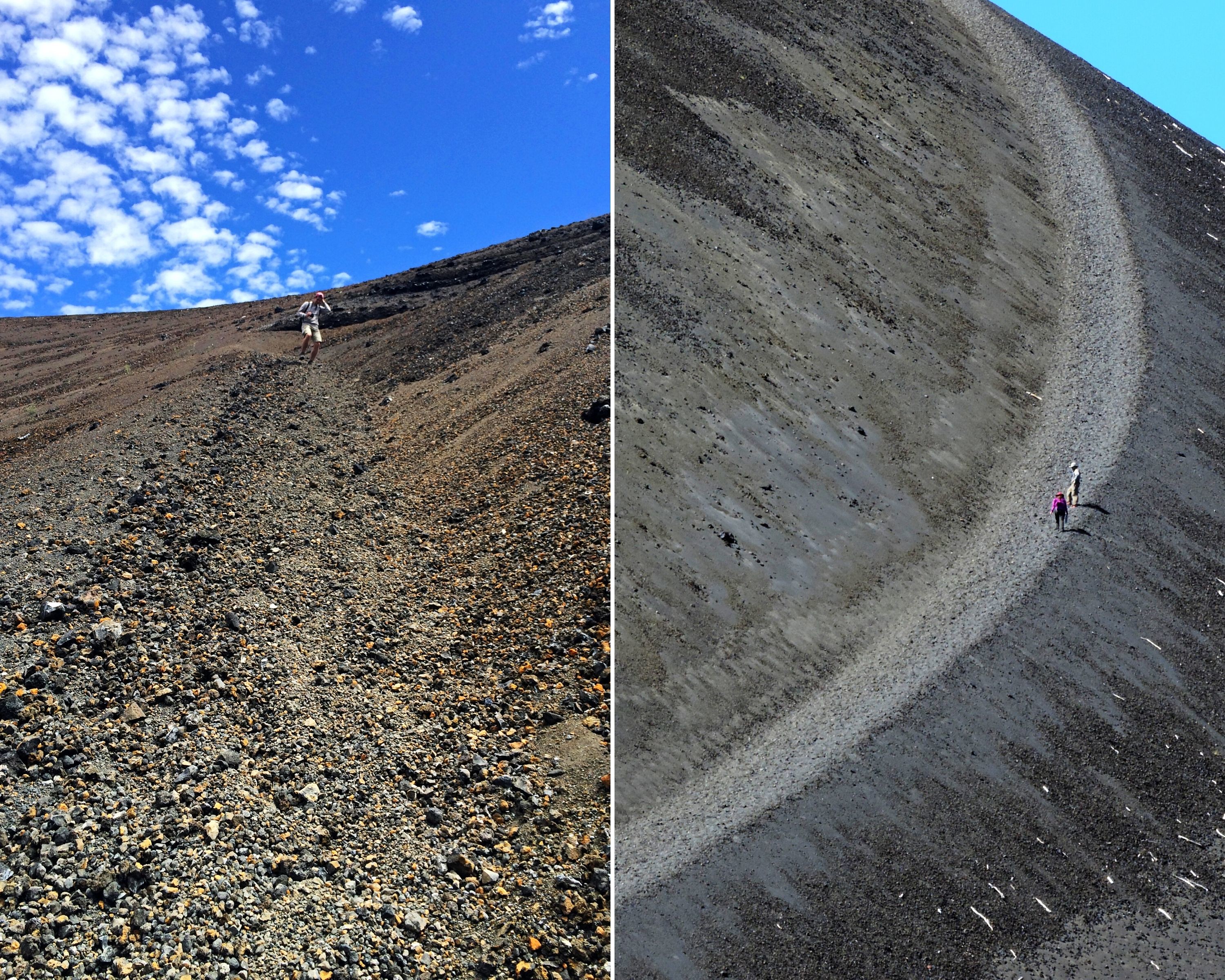 This was not the end of the trail though. The most fun part came after we reached the top: we hiked down to the crater. It was amazing to take a close look at it from the top, but we could only truly feel its size when we hiked down to its bottom.

Besides, how cool does it sound that “Oh, and then we ate some snacks at the bottom of the volcano crater…?” As cool as it was doing it. 🙂 (No rotten egg smell down there.) 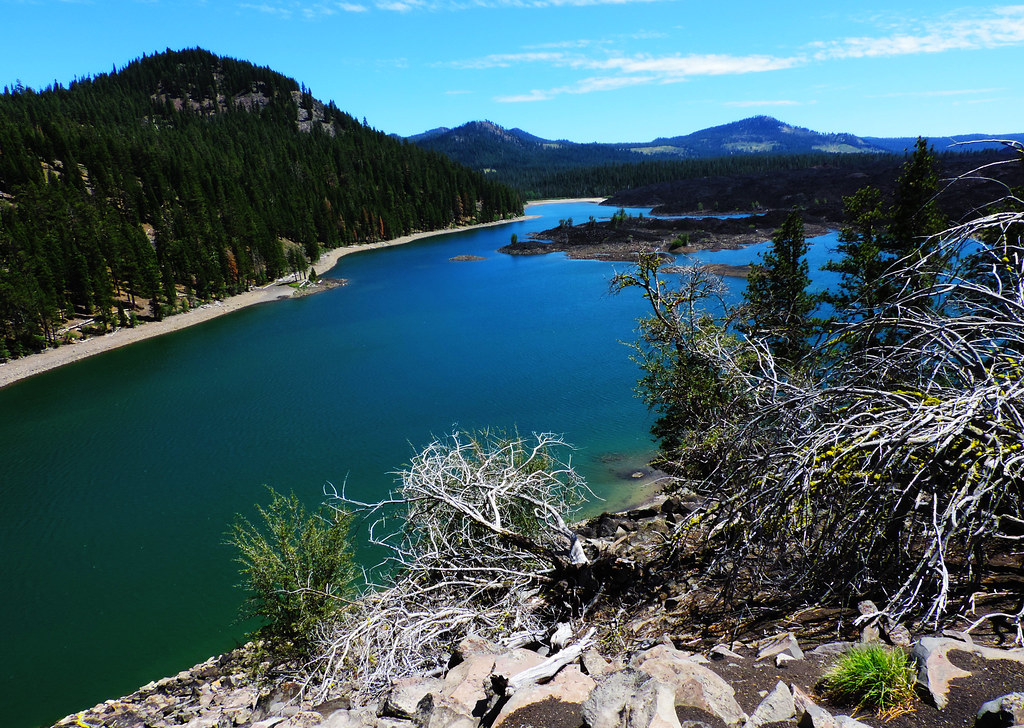 Cinder Cone was a half day hike for us. We spent the afternoon at Butte Lake which is right at the Cinder Cone Trailhead. There’s a trail that runs along the lakeshore: an easy and beautiful walk with views of the lava beds, Cinder Cone and Lassen Peak in the distance. We enjoyed it, and it was just the perfect kind of light exercise after the Cinder Cone Trail.

How to get there? 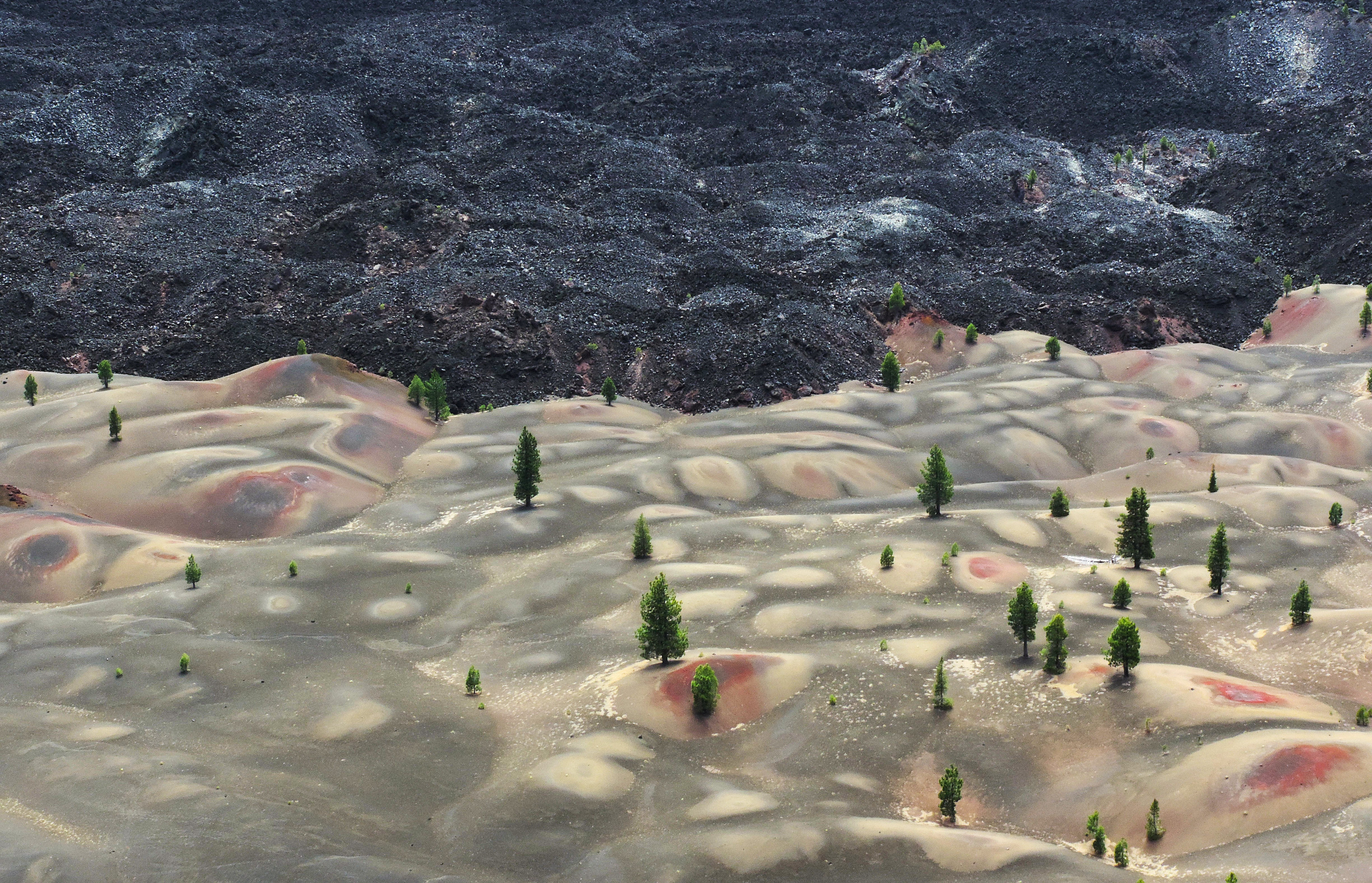 Cinder Cone Trail starts from Butte Lake that’s accessible by a dead-end, dirt road south of Highway 44. Expect yourself and your car to be both dirty by the end of this adventure. But our experience is that our ‘dirty adventures’ were the best adventures of all, and this one is not an exception either. 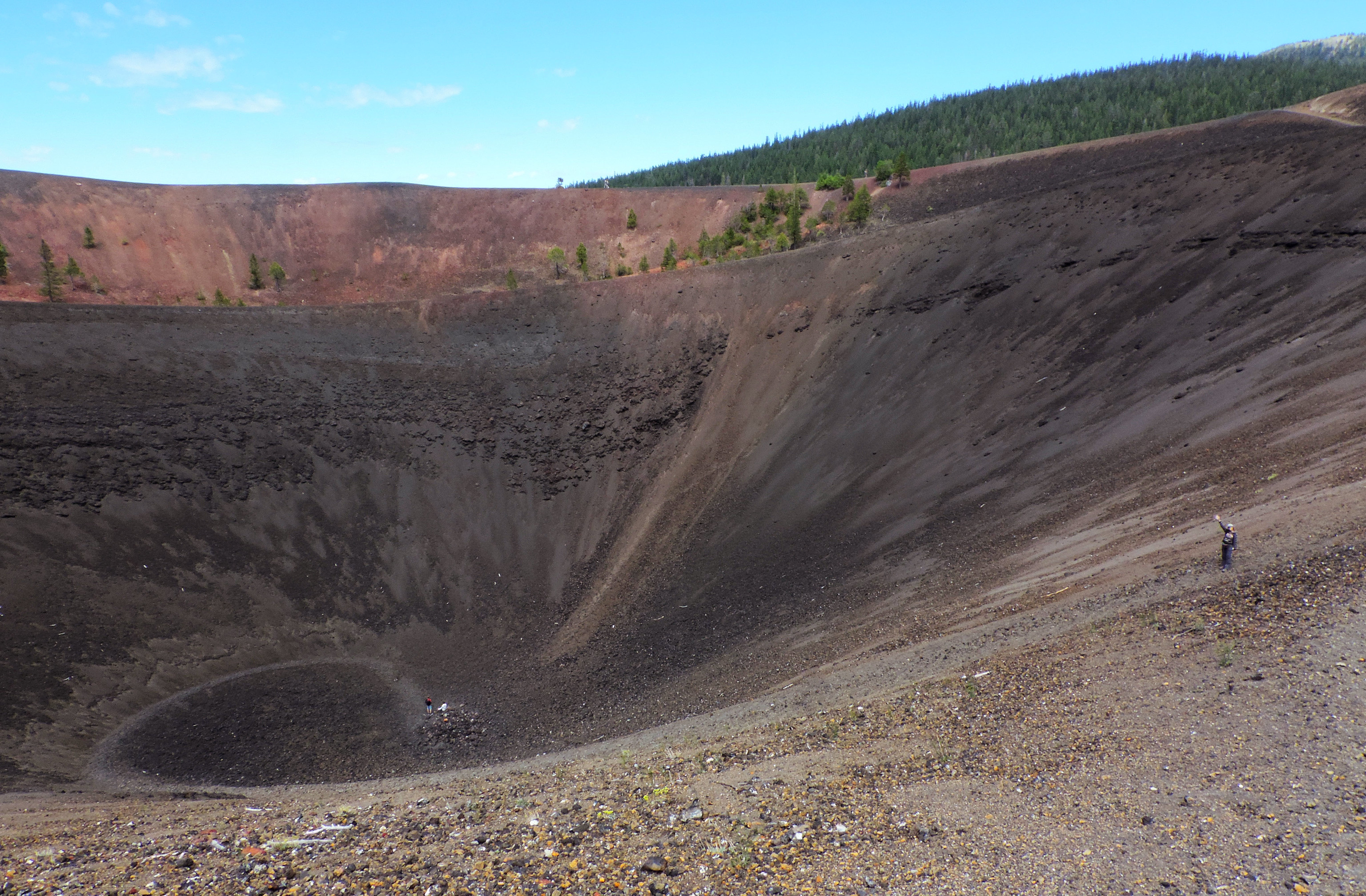 Lassen Volcanic is a park for summer hikes. Roads in the park can be covered with snow from October-December to May-July depending on the weather. Snow conditions vary every year, so make sure to visit the official NPS website about Lassen Volcanic before your visit. You can find a lot of other useful information and good-to-know there.

Have you ever had a close look at a volcano? Is it on your bucket list?