How Was It Flying With A Toddler For The First Time?

How Was It Flying With A Toddler For The First Time? Oh, we had our perfect plans – about flying with our baby, and about parenthood, as well. Any parent reading this, we bet they laugh out now. Rightly so.

Nothing ever happens how you plan it, that’s one of the most important lessons we learned as parents. Being an obsessive planner, maybe a bit of a control freak, I have to admit it was a hard lesson for me to take. It still is.

So I had my plans for flying with him, our dear little baby boy, just like I had my plans for everything else. Spending lots of time at home with him in the first few months, I was eager to get out and travel, anyway. I wanted to travel overseas! Because he’s small, tied to my chest in the carrier, we can easily take him on any trip, and we can save one of those expensive flight tickets, because he’s under 2 and can sit on my lap.

Then came COVID-19, hah. No flying overseas. No flying anywhere. So by the time we had our first chance to fly this spring, Tomi was not a baby any more, but an energetic toddler. Still under 2 years, at least, so we could save some money on his ticket. 😛

But I was more worried about flying with him as a toddler, because toddlers don’t sleep much and can’t sit much in one place either. How will we handle a 5.5 hours flight with him? That was the length of our direct flight from Budapest to Tenerife, and I know it’s not even considered as a long flight. At least not when you don’t have a toddler with you.

But we accepted the challenge, of course. With half a backpack of children’s books and several cute animal videos downloaded to my tablet (which we’ve never given into Tomi’s hands before, because we keep him without screens, phone, tablet or whatever else), we got on the plane. I couldn’t think of any other toy to take, because he likes taking them apart and throwing them away, and I didn’t want to spend our time constantly under seats and other people’s legs to search for his tiny things.

I knew how it is when we take him anywhere by car: we have to stop every 1-2 hours so that he can run around somewhere, because he cries and screams endlessly if he has to sit for too long. Those tantrums with high pitched screams and constant crying were what I imagined in most of my worst case scenario nightmares for the flight. I only hoped we could handle it somehow.

Finally, the whole journey turned out so differently than what I expected! A piece of cake, it really was. No tantrums or cries. No need for books, least for a tablet. No need to even entertain him, because Tomi was constantly entertained simply by the happenings around us. We only took care of him so that he didn’t do anything dangerous or inappropriate (like pulling the hair of the lady sitting in front of us). 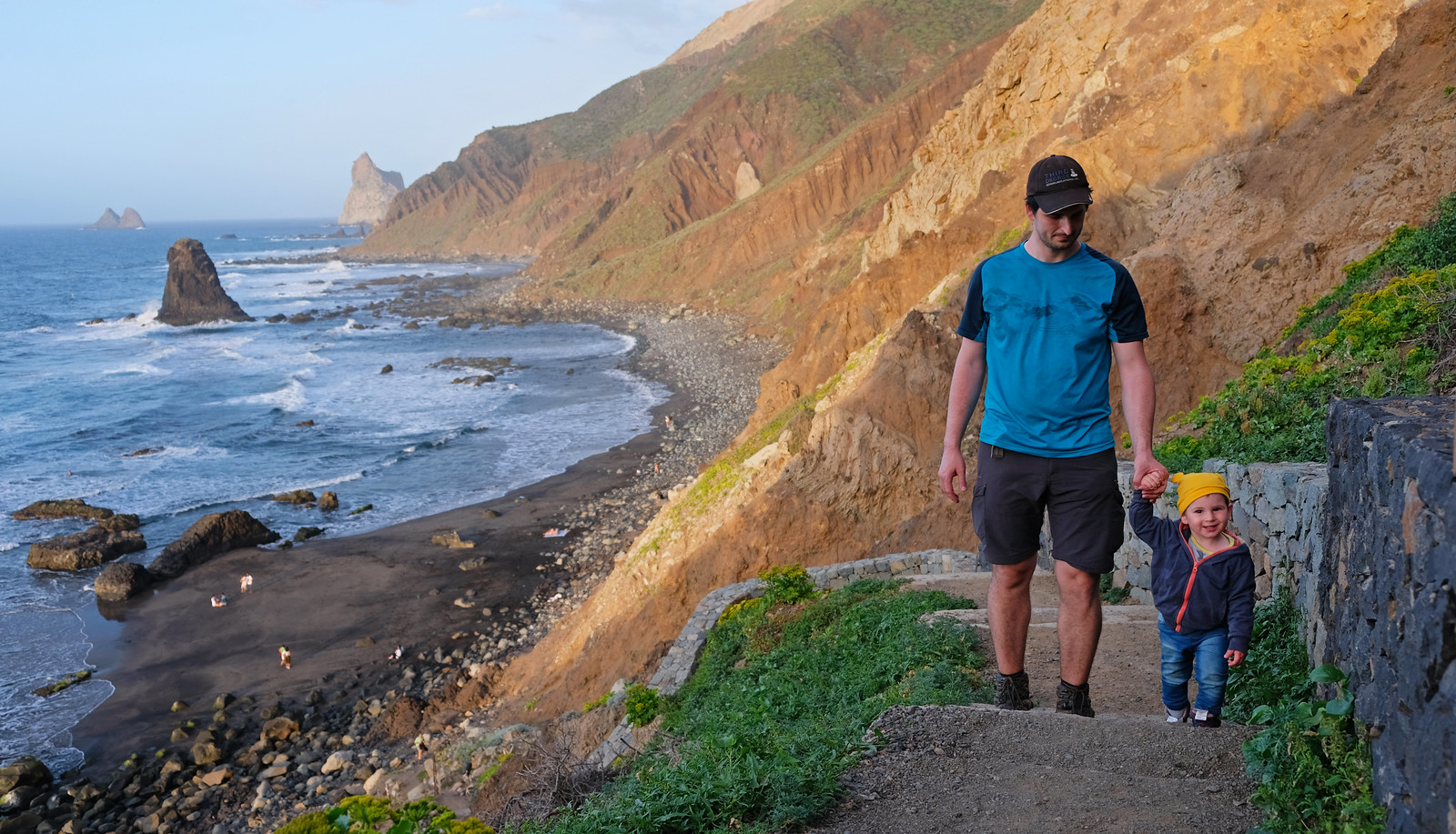 What we didn’t do was taking any decent picture of any of us during the flight, hah! So here’s one taken after we arrived 🙂

I wouldn’t say the flight with him was not more tiring than peacefully reading a book (which is what I usually did on airplanes before Tomi), but it was certainly manageable without going insane. Maybe we were only lucky, but there was also one thing I forgot – and shouldn’t have: toddlers find EVERYTHING so interesting! The people on the plane. The other kids. The seats. The small folding tables. The window. The clouds. The safety belt. The security brochure (Tomi liked throwing that one under the seats).

Sure, I wouldn’t have forgotten this if we would have taken Tomi anywhere by public transport – which we didn’t due to the pandemic. But I also have to add that the flight was not full, so we had a row to ourselves, and it was possible to unfasten our seat belts for most of the time, so we could even walk with Tomi in the aisle – which was his favorite thing, seeing all the people, waving and saying hi to them.

Nevertheless, this flight was a relief. Then the one back was during the night, and he slept through it (me, too, actually, thanks to Csaba). We’d be much more confident with him now before a longer flight, too. (Overseas maybe? It’s definitely not on Tomi’s account that we can’t do that yet.)

I like flying and I prefer window seats, but my enthusiasm is nowhere near Tomi’s. Flying was just as exciting to him as anything that came after that. Welcome to a toddler’s world. 🙂

Do you have experience flying with a toddler? Any funny stories? We’d love to hear them!