North Macedonia is one of the most underrated countries in the Balkans – and in Europe, too. We think the main reason for this is that people don’t really know why it would be worth a visit in the first place. What to see and do there? And we’re here to tell you: there’s plenty!

Even though we spent two weeks in the country, there are regions we completely missed. Because we love the outdoors, and if you do, too, you can easily spend a lot of time in most regions, exploring wonderful mountain trails. In fact 85% of North Macedonia’s territory is covered in mountains, so your hiking options are endless. (Only your time is not, that’s a pity. :D)

But it’s also the country of monasteries and mosques (the latter is special, because it’s a European country but with a large Muslim minority), and it even has some ancient ruins, and a very ancient capital (inhabited since at least 4000 BC!). We focused more on nature than on cultural attractions on our road trip, and it was also nature that impressed us more.

With that said, here’s the list of our favorite attractions – fairy tale places that’ll make you want to visit North Macedonia, as well (we warned you…): 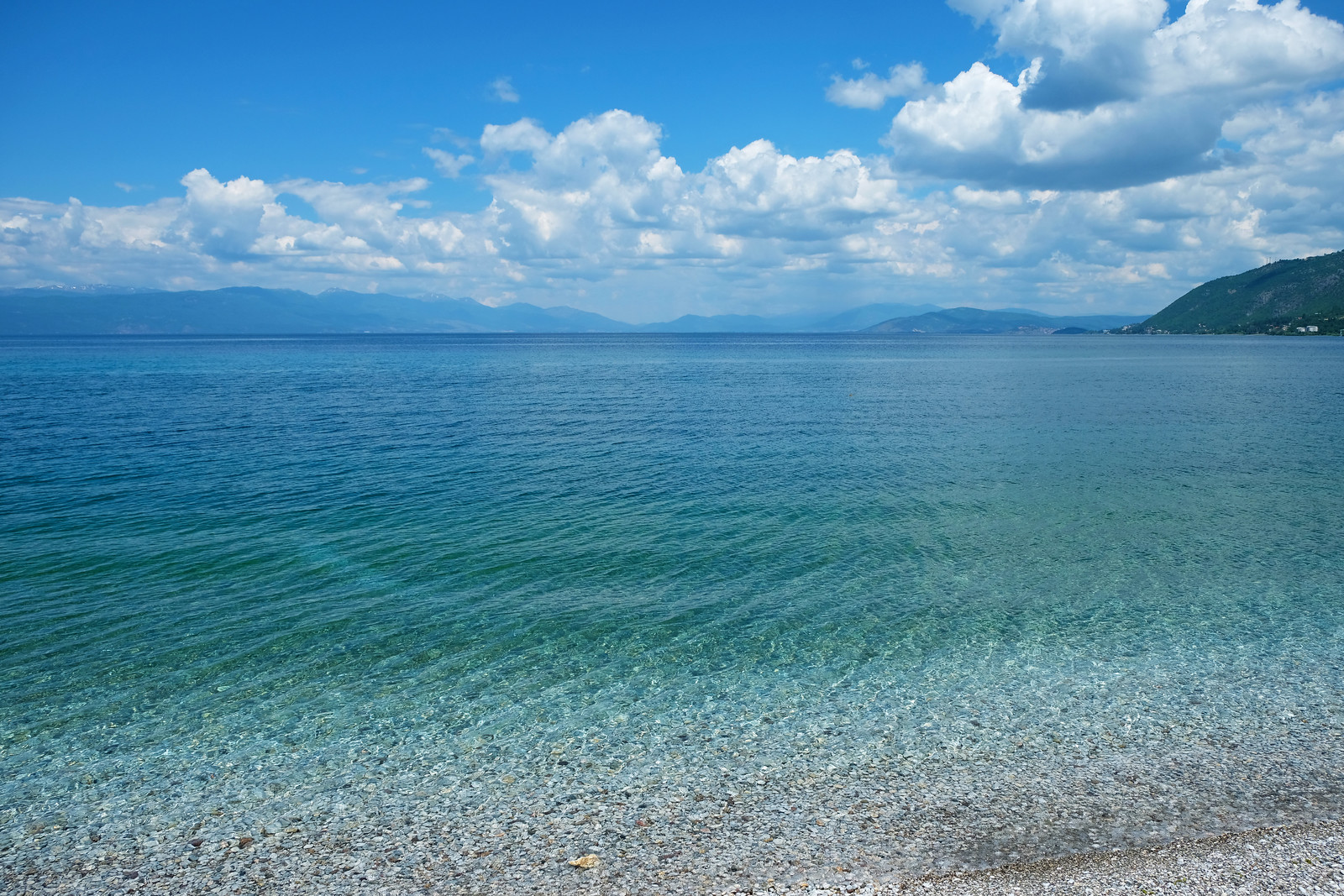 Let’s start with the most well-known sight in the country, because it deserves it. Lake Ohrid was our first longer stop on this trip, and it stole our hearts with pure, blue water that looks like the sea, hidden beaches, snow-capped mountains and the lovely town of Ohrid. It deserves all the hype – and we say it as people you could call outdoorsy, and who’ve seen many, many incredibly beautiful lakes already.

This particular beach in the picture is Gradishte beach which was one of our favorites.

The old town of Ohrid 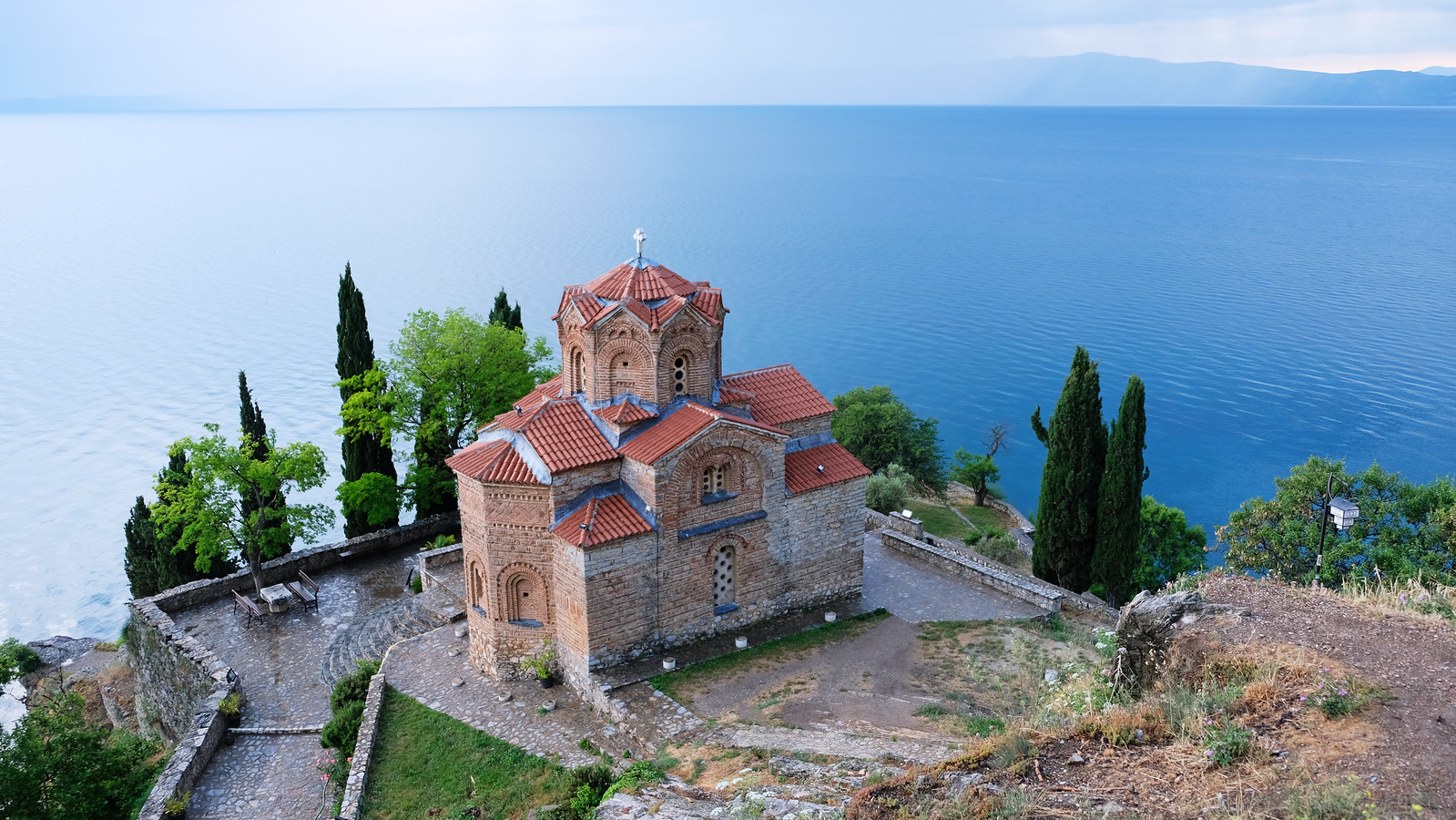 Ohrid is not only the name of a lake, it’s the name of a city, too. Together they were accepted as Cultural and Natural World Heritage Sites by UNESCO. 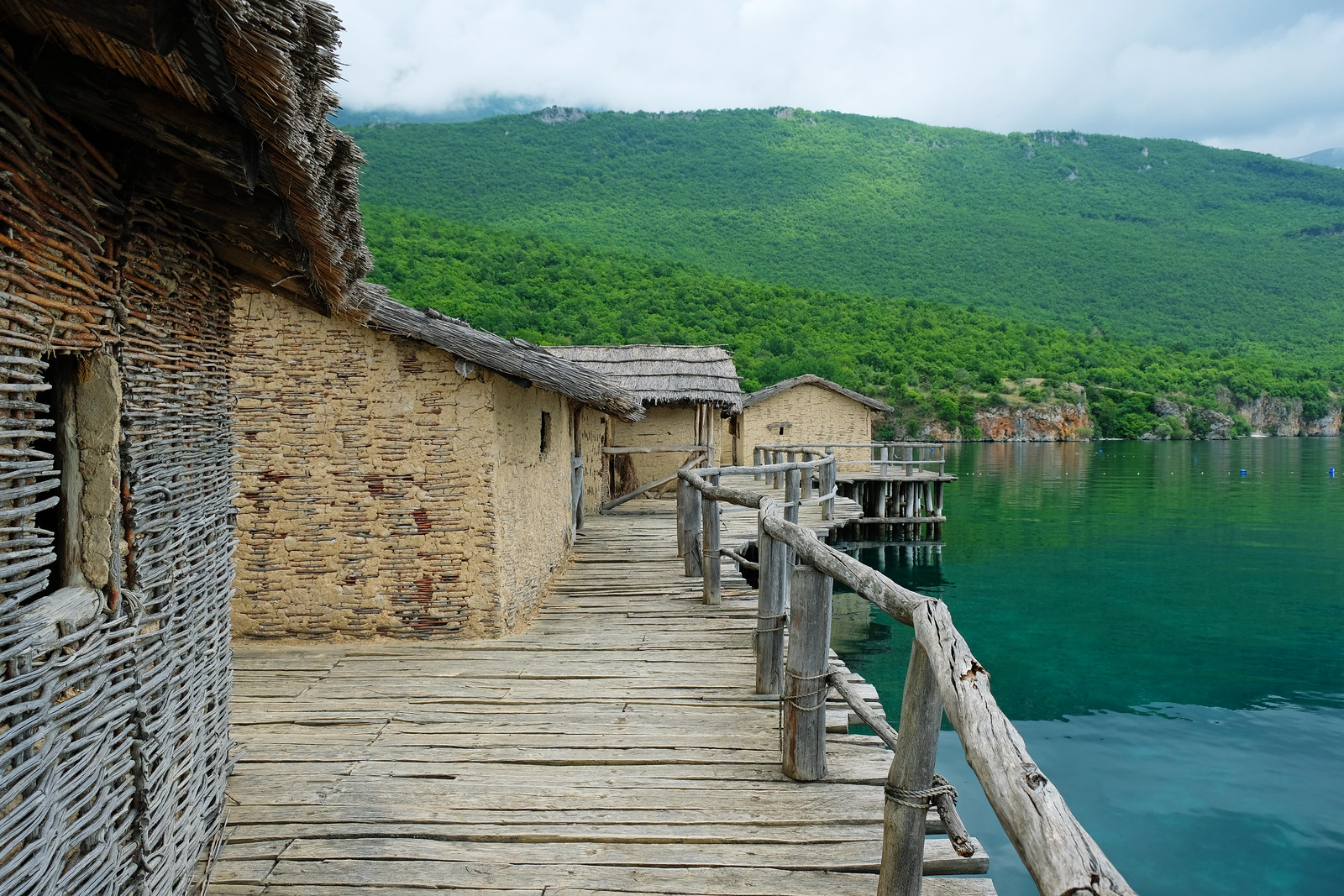 It’s a museum on water, an authentic reconstruction of a prehistoric pile dwelling settlement – and it’s pretty! Moreover, you can sign up for a scuba dive to the underwater archeological site. 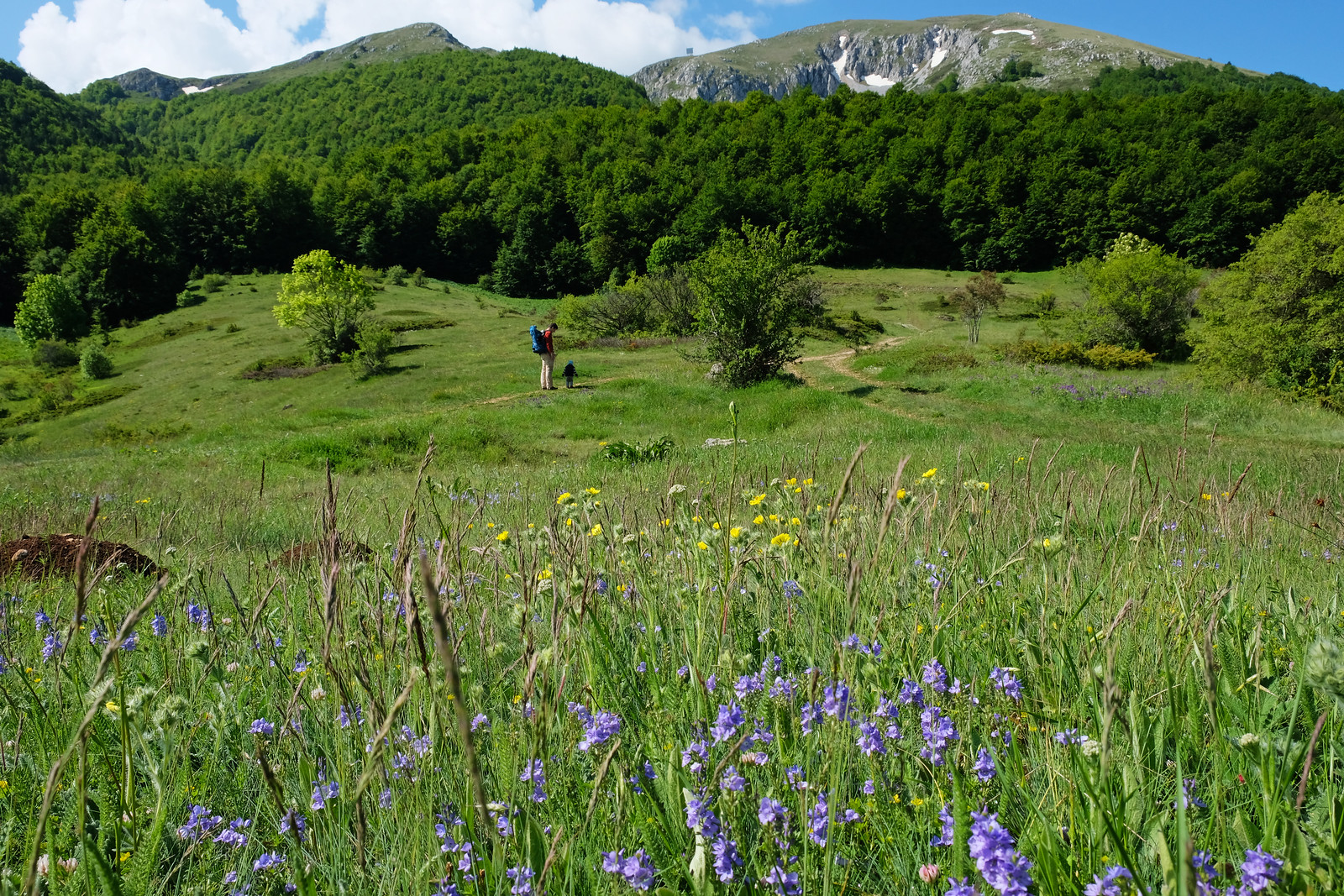 Galičica Mountains are situated between the two biggest lakes in North Macedonia: Lake Ohrid and Lake Prespa. Zigzagging P504 leads through the heart of this park, offering great views and lots of hiking trails. (It’s a paved toll road, with varying quality – from good to still acceptable.) 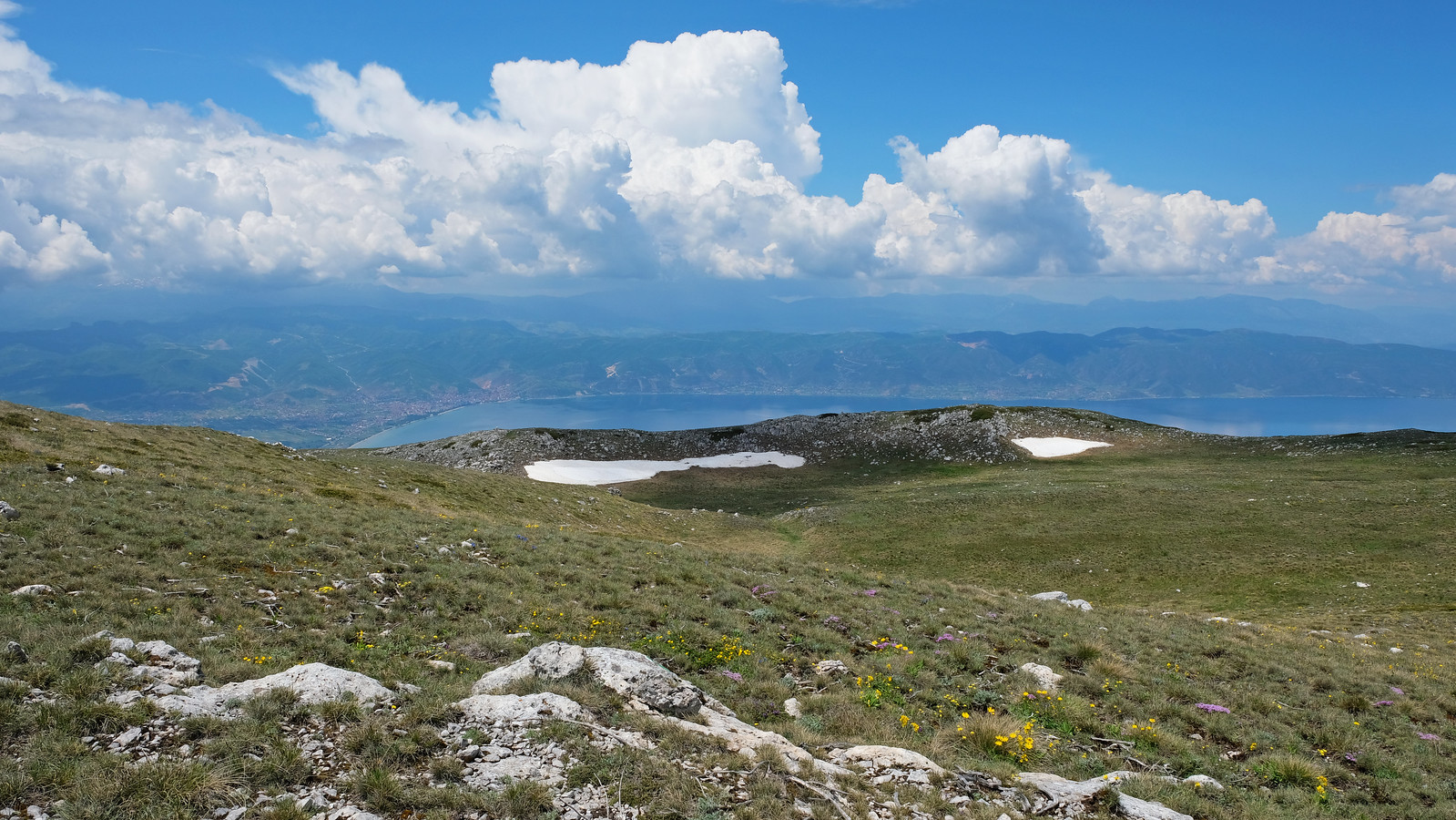 The most famous hike in Galičica takes you to 2255 meters high Magaro peak that offers a panorama including both Ohrid and Prespa lakes. (Yes, we did it, it’s a 7 kilometres loop trail.) 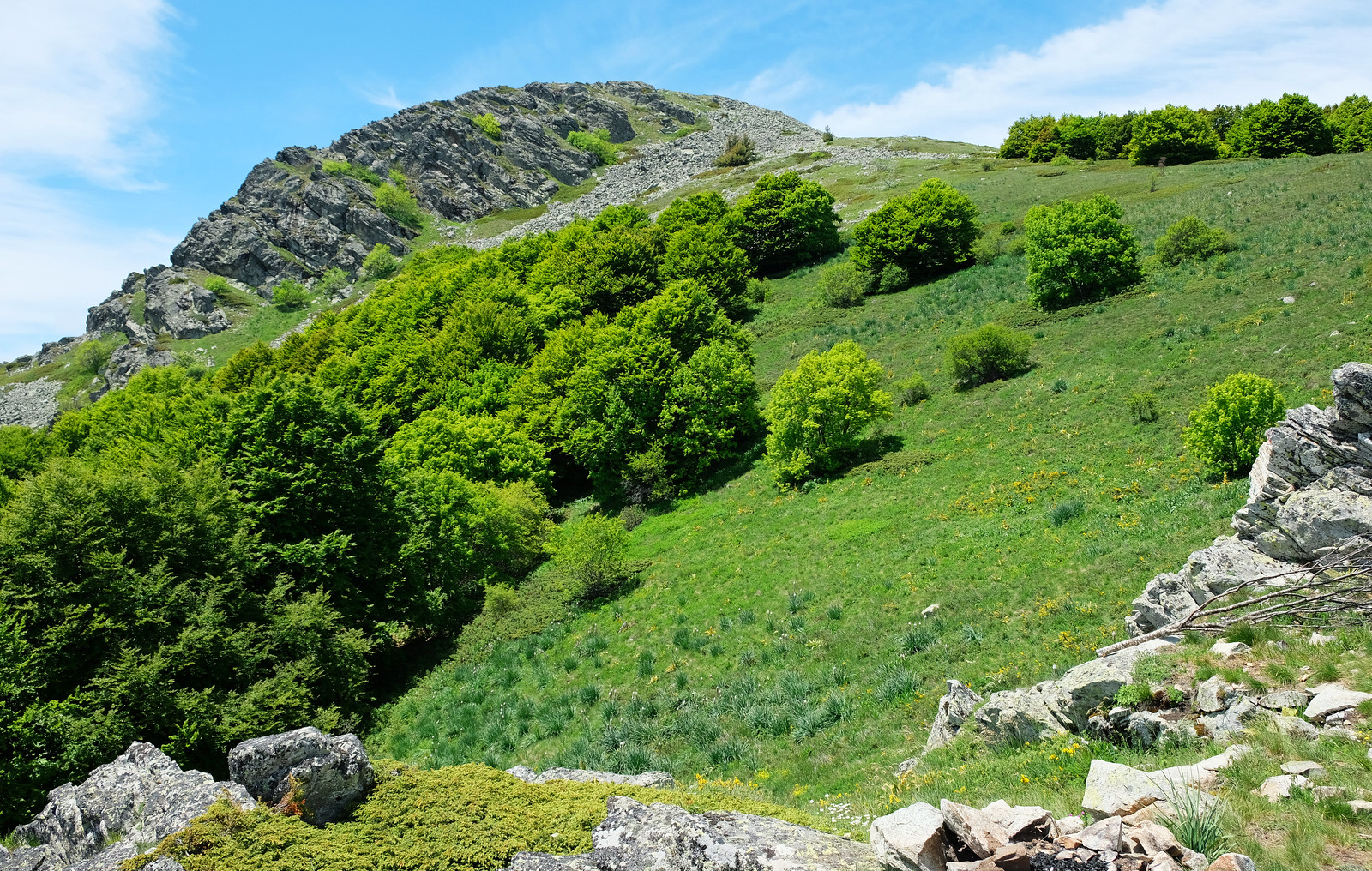 The oldest national park of North Macedonia. Alpine character, unique pine species of the Cenozoic age, Pelister’s Eyes. Millions of wildflowers, waterfalls made out of snowmelt, lush green meadows and big blue skies. Evenly ascending, technically easy trails. This is what we loved in Pelister National Park where we spent 3 days hiking. And, of course, the views! 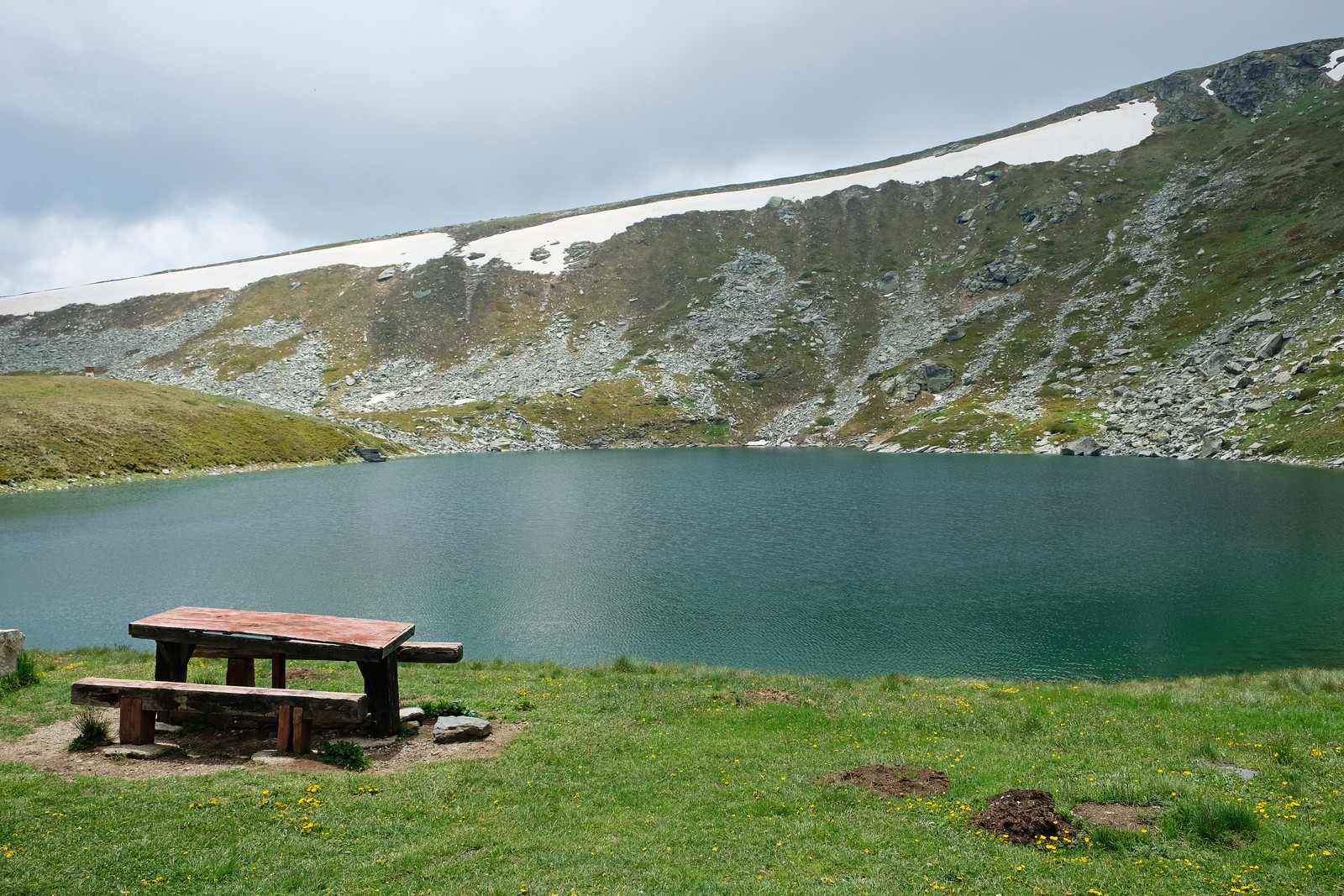 The two famous alpine lakes of Pelister. They can be reached on a day hike from the village of Nizhepole. 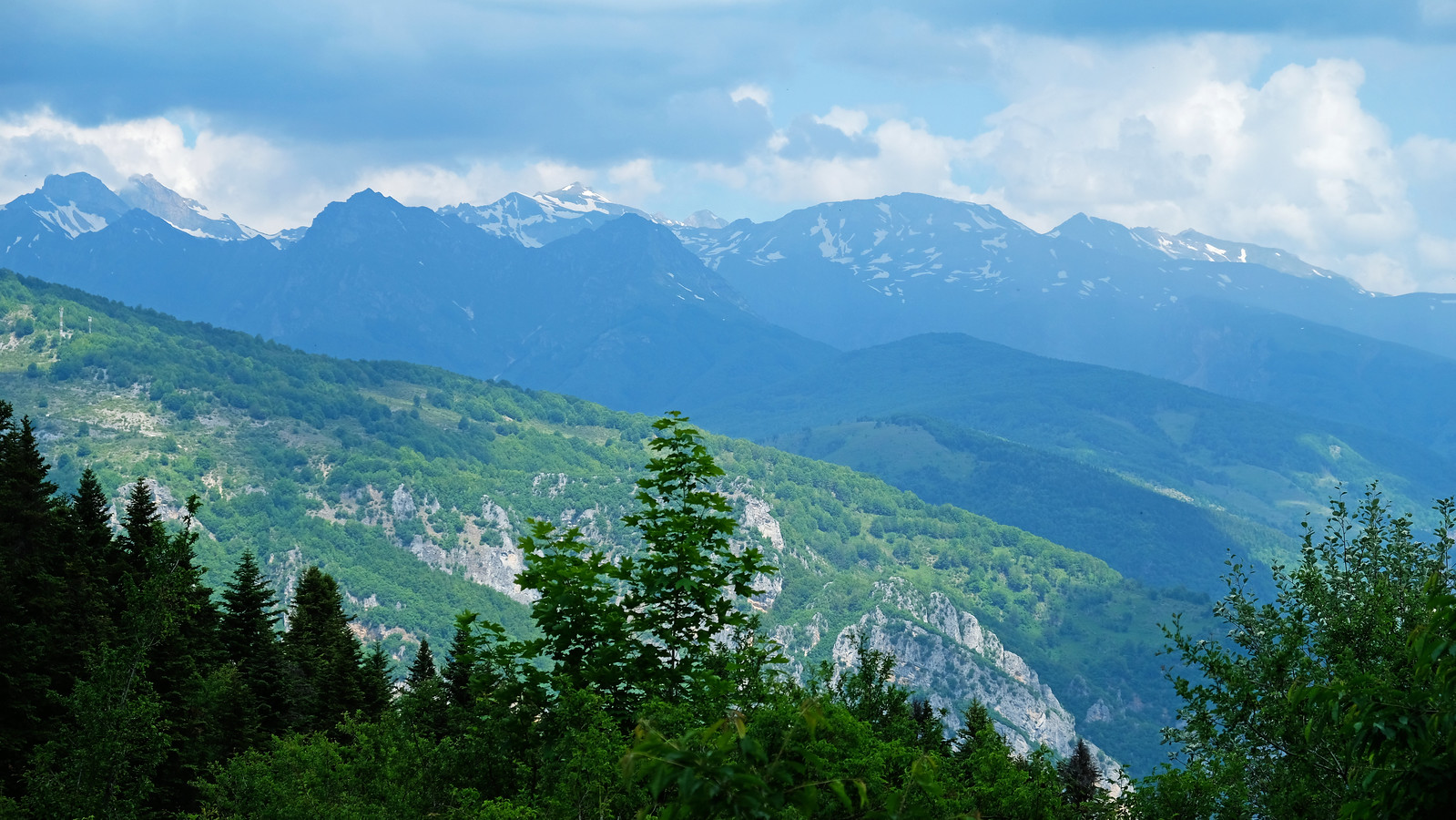 The largest national park in North Macedonia. It’s the meeting point of three mountain ranges: Šar, Korab and Bistra mountains. Between them you find the deep canyon of the river Radika, stretching for more than 25 kilometres. Add some grassy plateaus, dense forests, snowy peaks and tranquil Lake Mavrovo to get a postcard perfect alpine idyll. 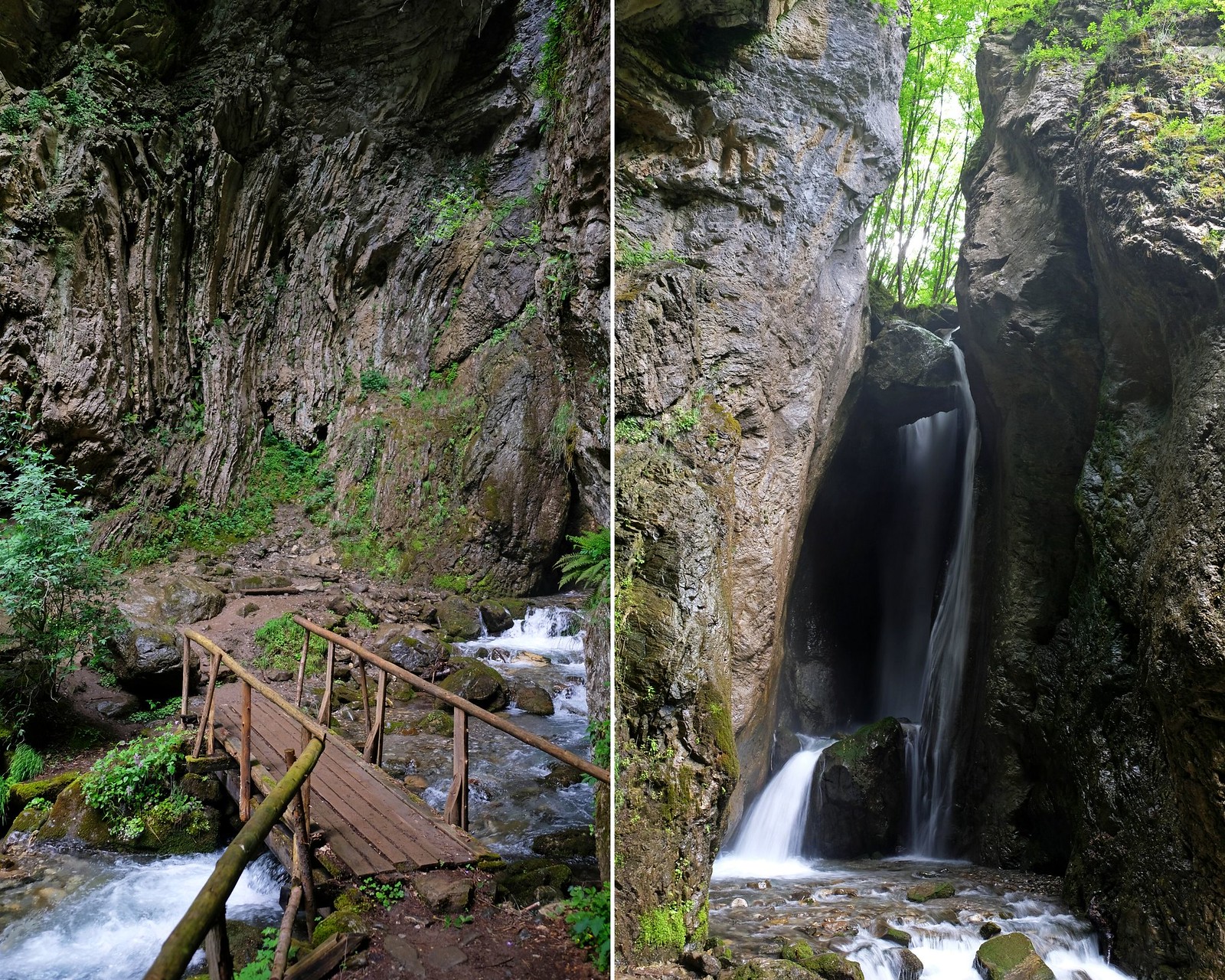 A picturesque waterfall and gorge which is a 3 kilometres round-trip trail from the village of Rostushe. 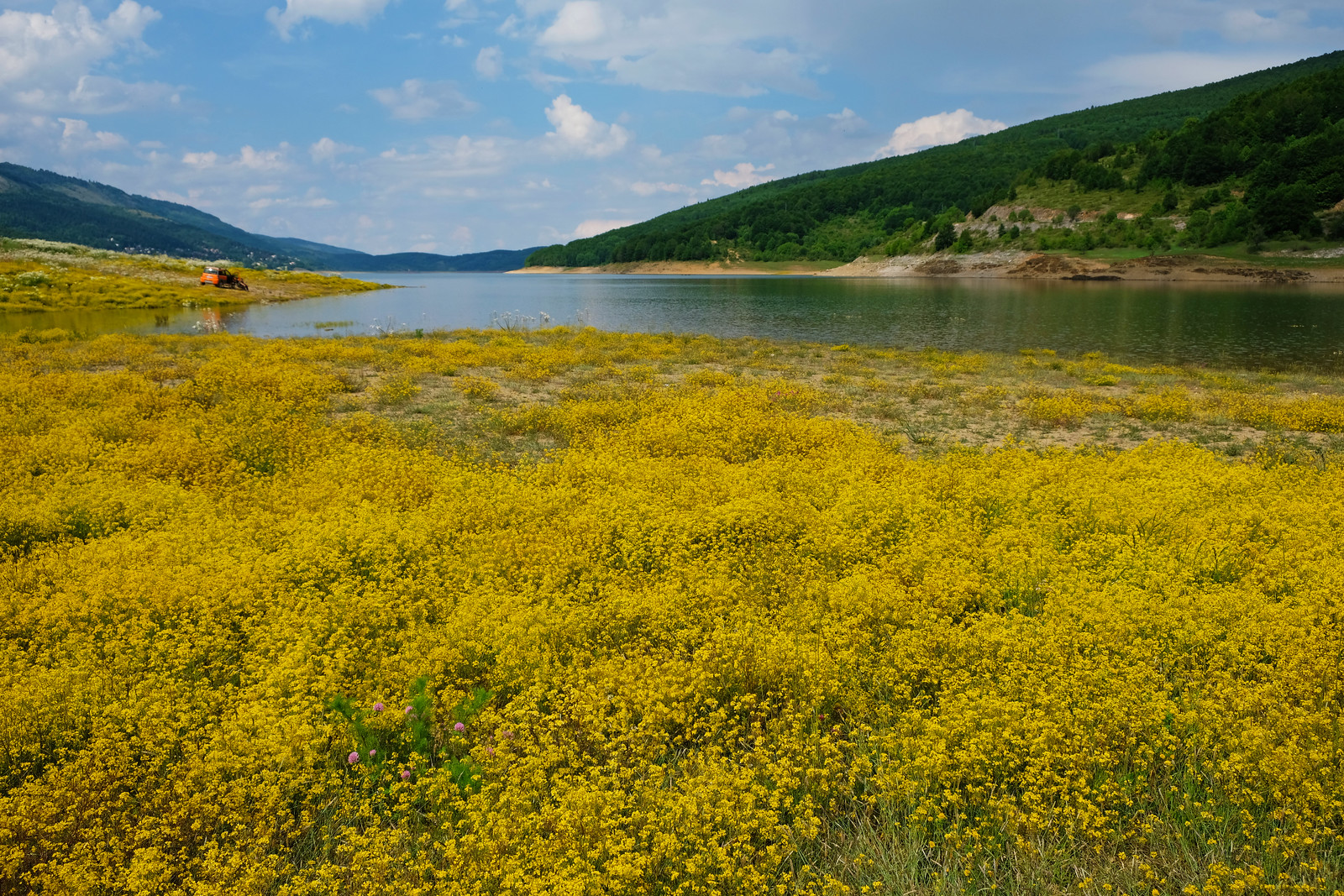 It’s actually a water reservoir, but it looks beautiful tucked between the green mountains. The lakeshore is a bit swampy, but we liked the millions of wildflowers in mid-June. 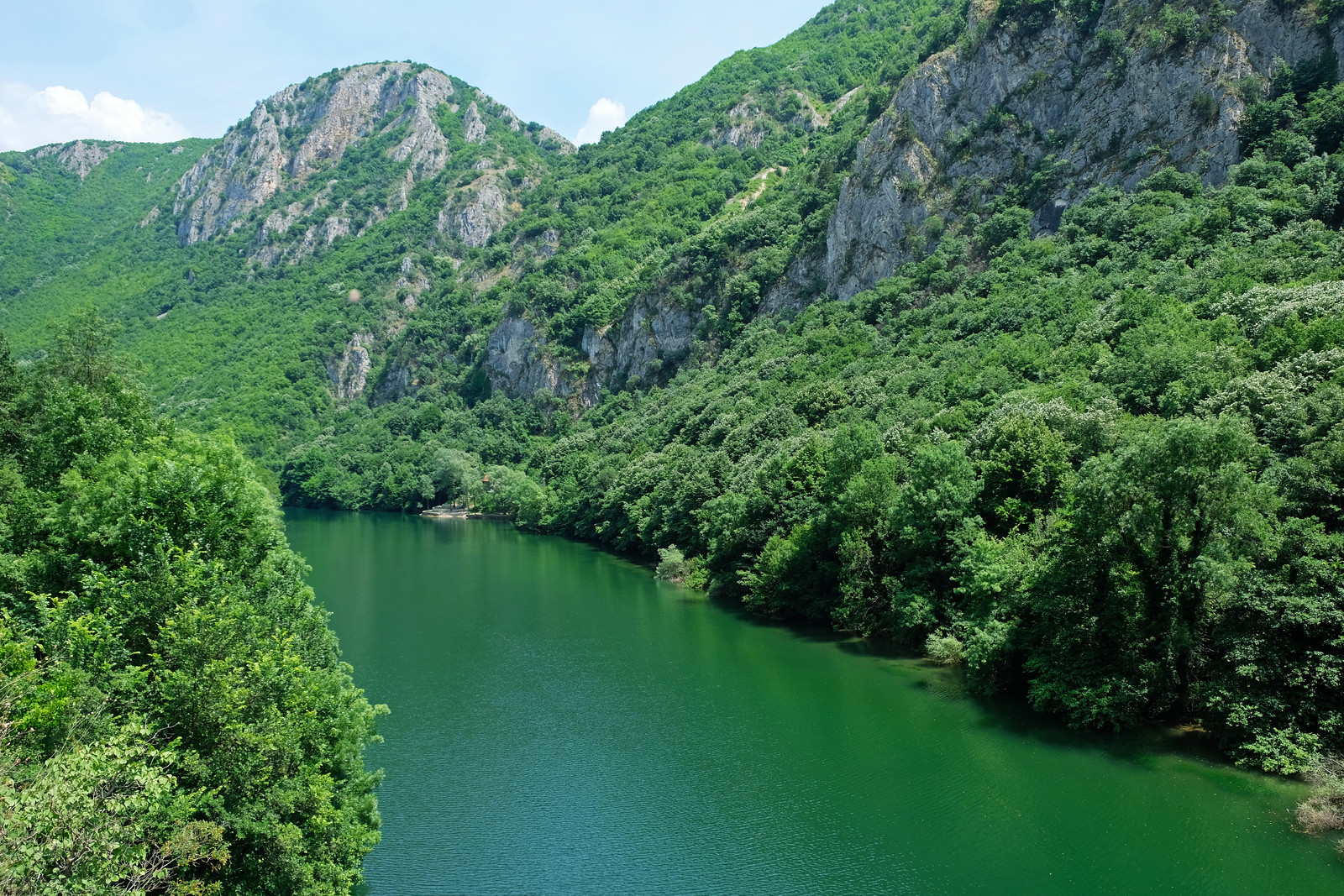 Located only 30 minutes drive from Skopje, Matka Canyon is a favorite nature getaway of lots of Macedonians. You can explore the canyon on foot or by both – we tried and loved both! Also, several hiking trails start in the area. 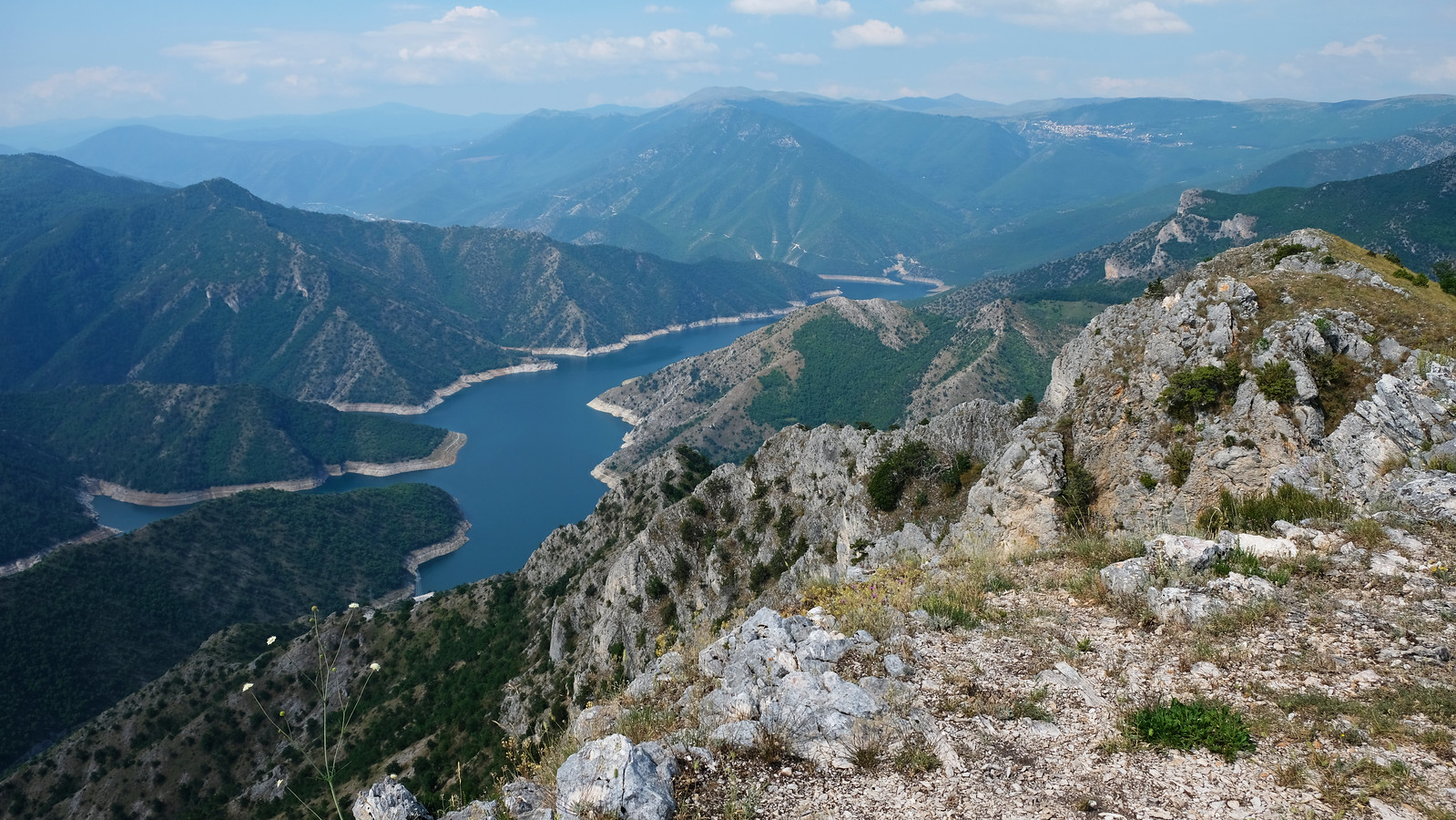 Another scenic and easily accessible sight in Jasen Nature Reserve near Skopje. We could actually drive to this viewpoint, and then also did a short hike to enjoy the views for even longer. 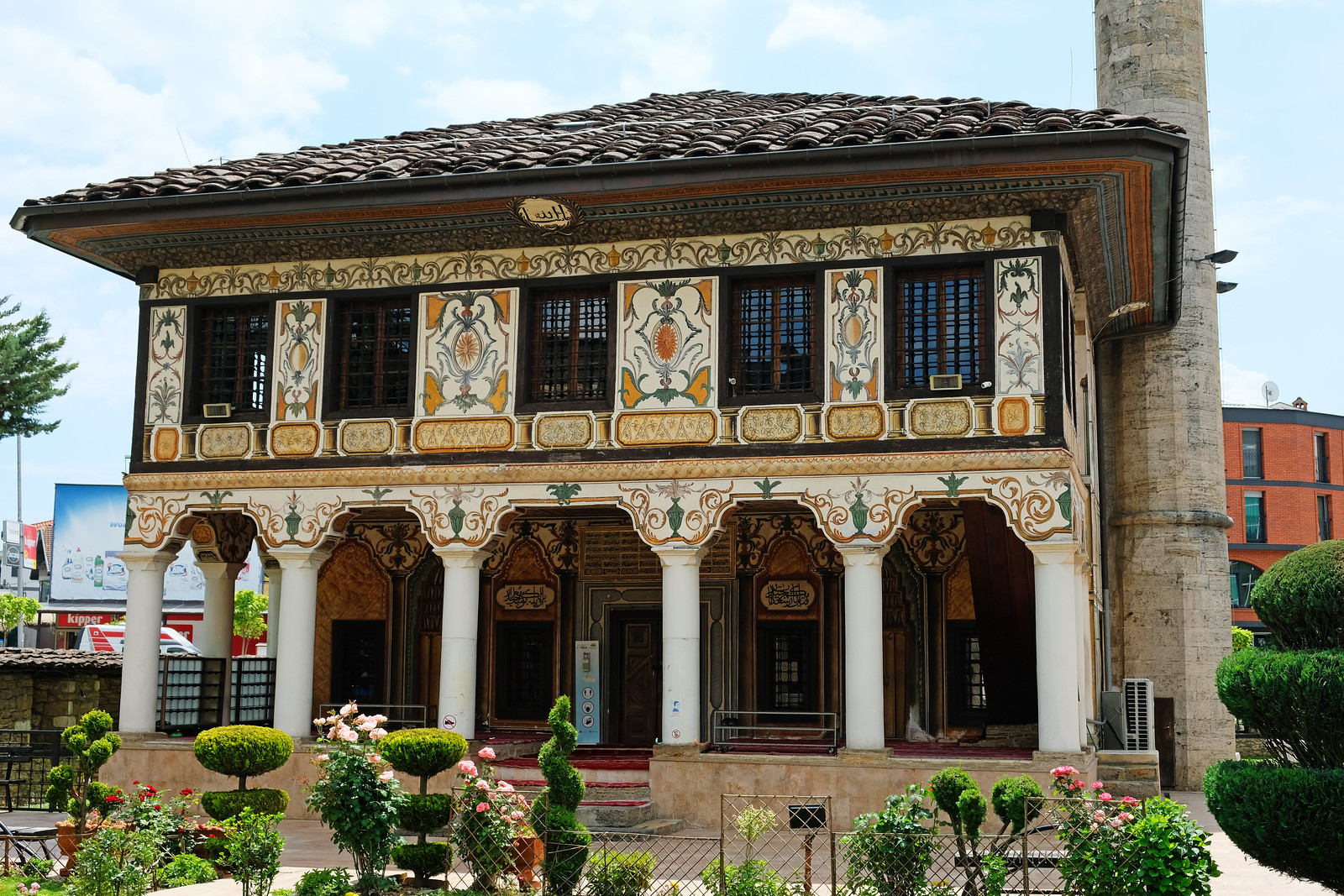 The Šarena Džamija mosque (translated as Painted Mosque) of Tetovo is a unique one. Unlike many other mosques, it doesn’t have an exterior dome, and it’s decorated with bright paintings. Its door is not open by default, but the kind man who took care of the mosque let us inside, where the colorful interior also impressed us. (We could say it’s the most amazing mosque we’ve ever seen, but the truth is, we haven’t seen that many mosques. 😀 It is the most amazing though.) 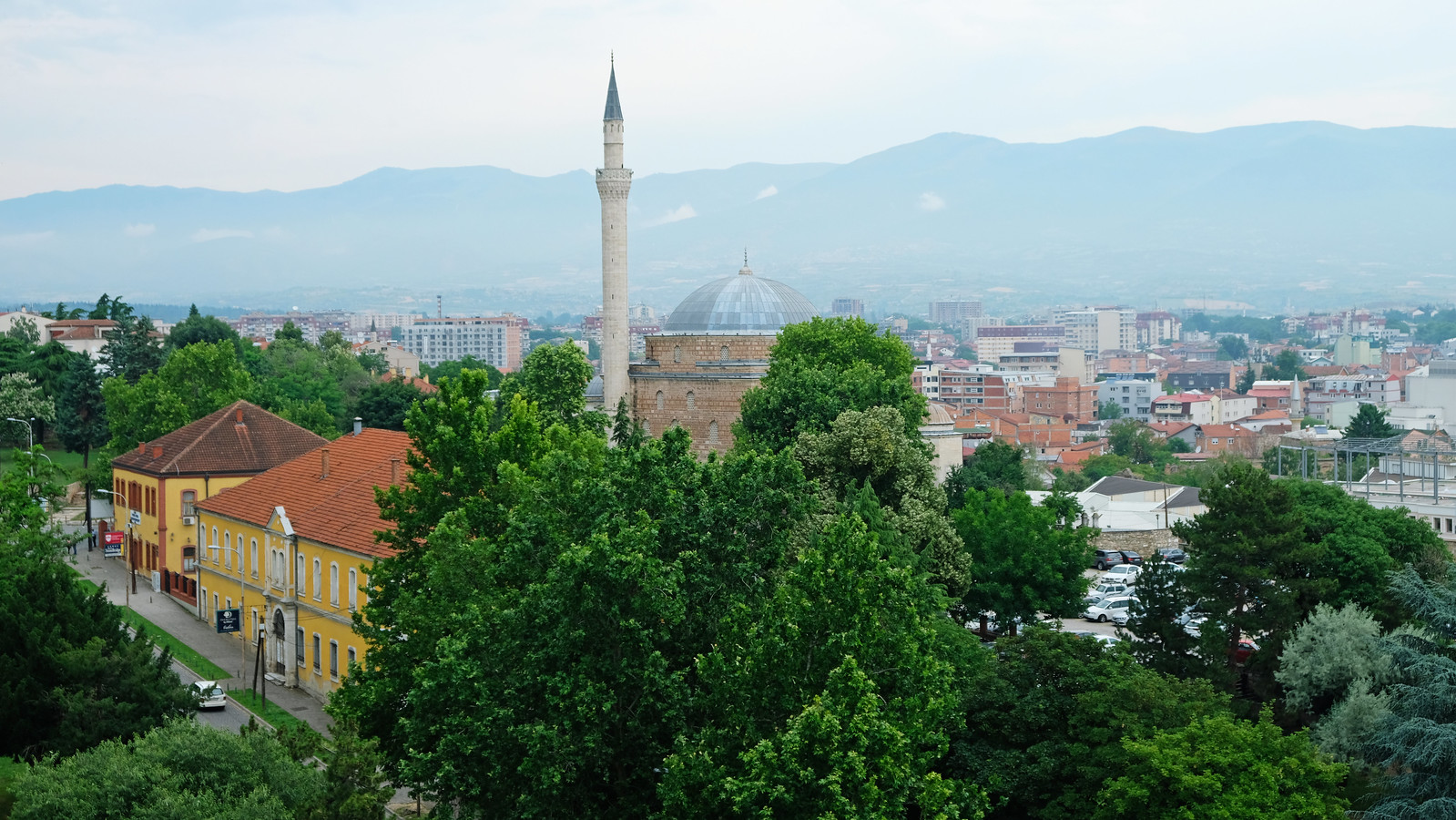 Skopje was not an immediate favorite city to us. We were not even sure if we liked it at first. But Skopje Fortress, one of its oldest areas, was definitely our favorite sight there. We walked along the walls, enjoying views all over the city.

Have you been to North Macedonia? What are your favorite places?