Are you saying that Soča Valley itself is a fairy tale place? You’re right. It’s our favorite region in Slovenia, too. But we’d like to give you some ideas where to start exploring it, and also show you lesser known places that we only discovered on our second visit. 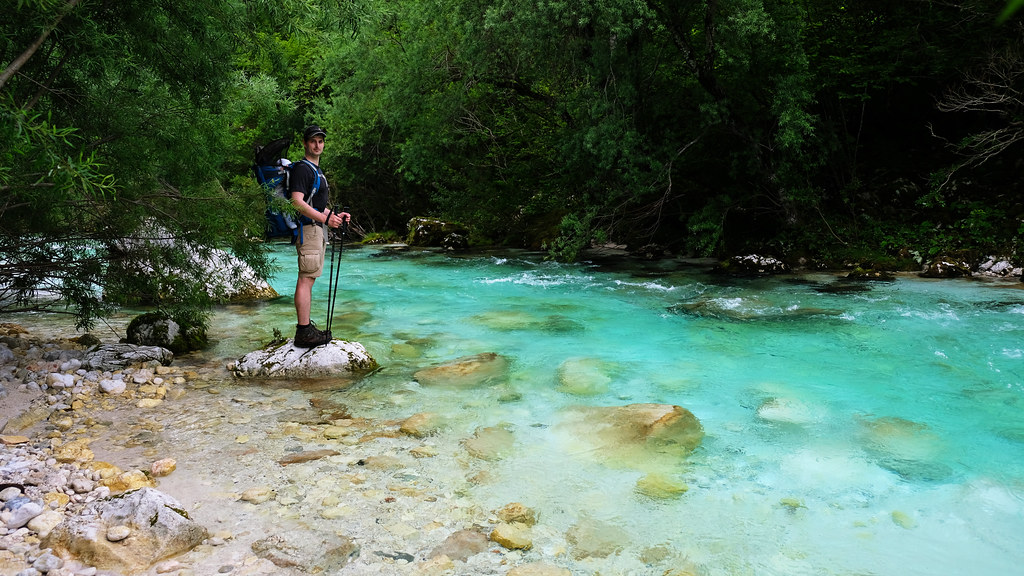 Soča River (or Isonzo river as Italians call it) is an alpine river with its source in the Trenta Valley in the Julian Alps. And it’s just the most beautiful river in Europe! Just take a look at that turquoise: 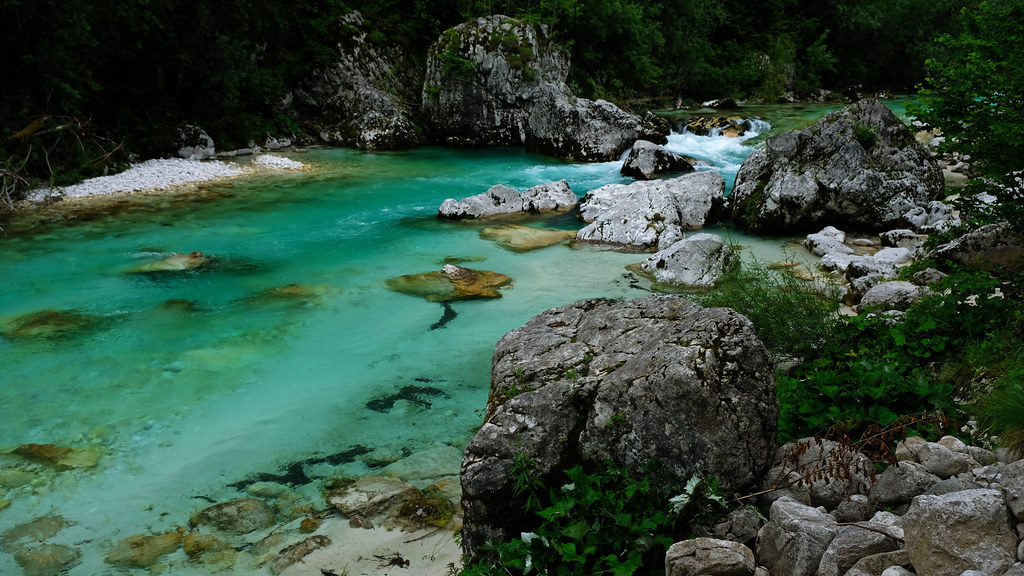 What’s more, you can enjoy its beauties while hiking the ~30 kilometres long Soča River Trail. No worries, if you don’t want such a long hike. The trail is accessible at countless pullouts by the road in the Soča Valley, so you can start and finish it mostly wherever you want. 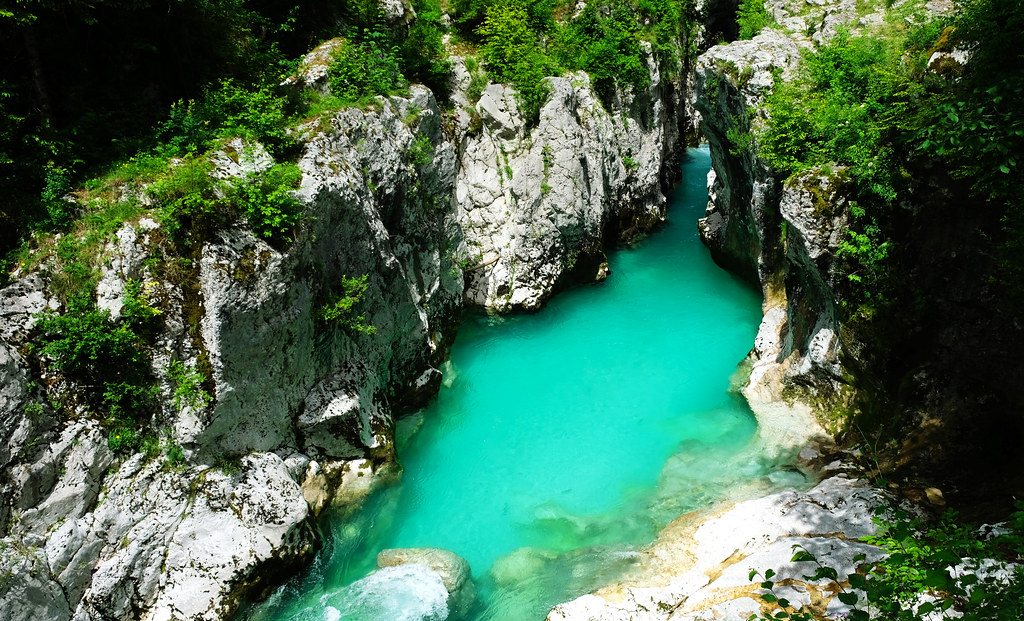 Anyway, the Great Soča Gorge is located about 10 kilometres north of Bovec. It’s kind of hard to access, and it can be best seen from some parts of the narrower, steeper trail that follows it along and from the footbridges. Speaking of which… 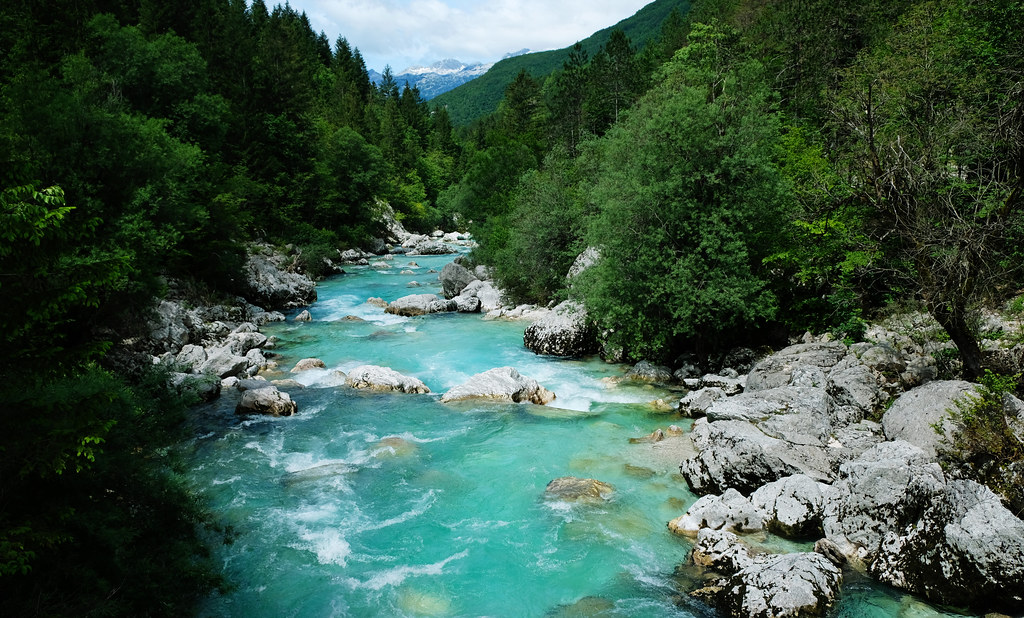 Even if you don’t want to (or can’t) hike at all, just drive along Soča and stop at every footbridge that has a pullout nearby, you’ll be rewarded with incredible views. I’m not telling this to discourage you from hiking there. What I’d like to tell you is that it’s impossible not to notice the wonders of Soča Valley even if you’re only driving through it.

The spring of Soča River 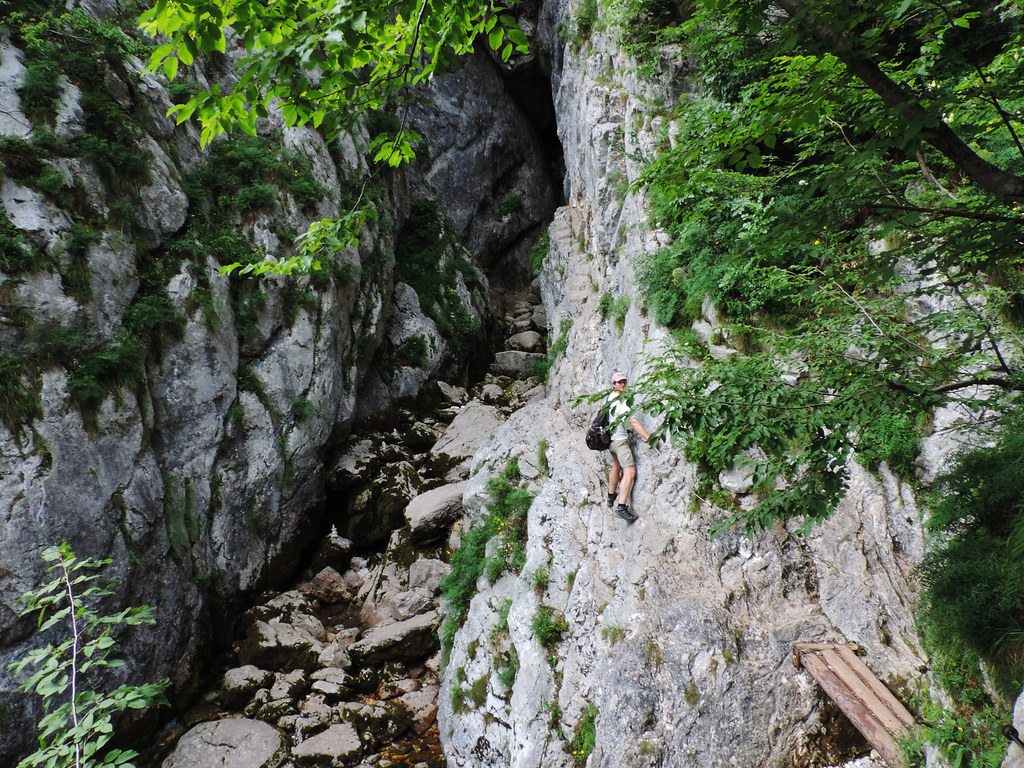 A short hiking trail leads to the spring of Soča River. It’s easy in the beginning, along the lovely stream with small cascades, but challenging at the end as it takes you up to a cave and a crystal clear pool which is the spring of this fabulously colored river. 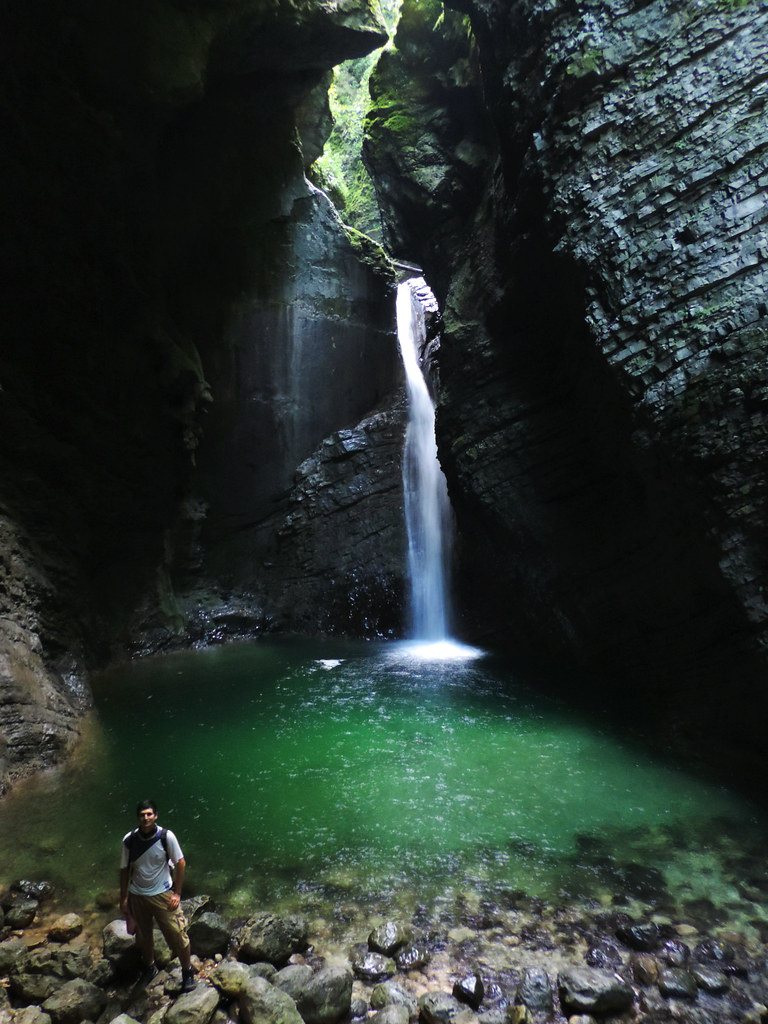 Not the tallest, but the most picturesque waterfall in the Soča Valley: Kozjak waterfall and its emerald green pool is located in a narrow canyon. So narrow that only a few light beams could reach down which makes the sight even more magical.

It takes a 20 minutes walk from Kobarid through a forest to reach it. 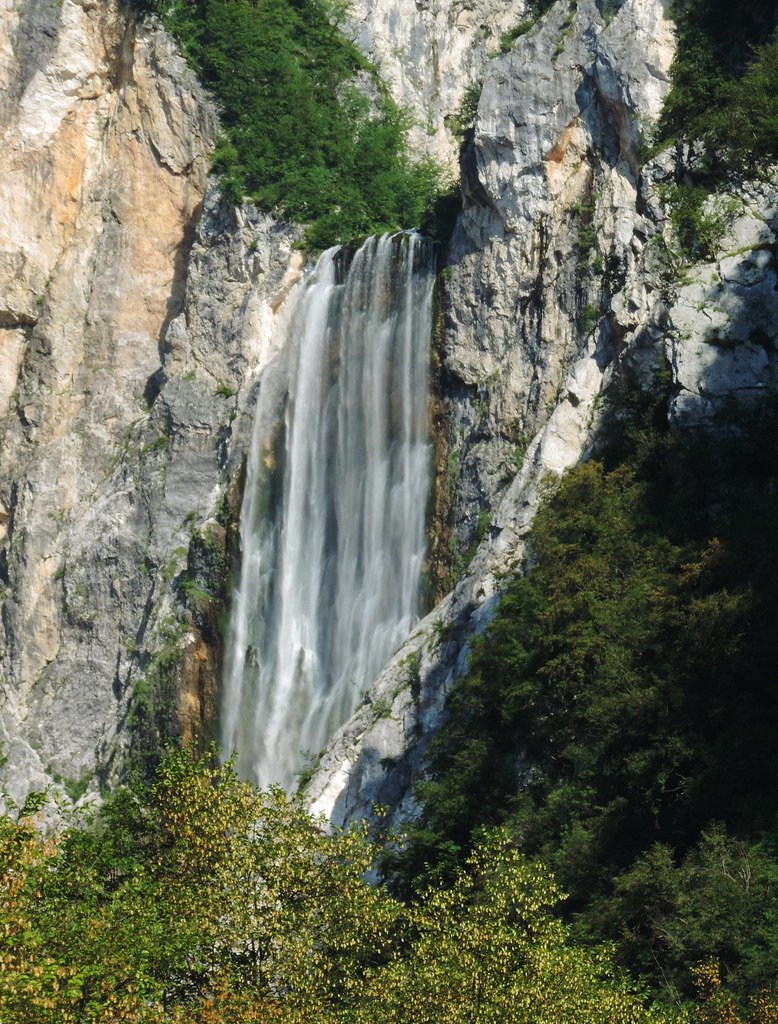 You can’t drive through Soča Valley and not see Boka, the tallest waterfall in Slovenia with its 106 meters. Mainly because it can be already seen from the road. But there’s also a short walking trail to a closer viewpoint – though you can’t walk too close to it. 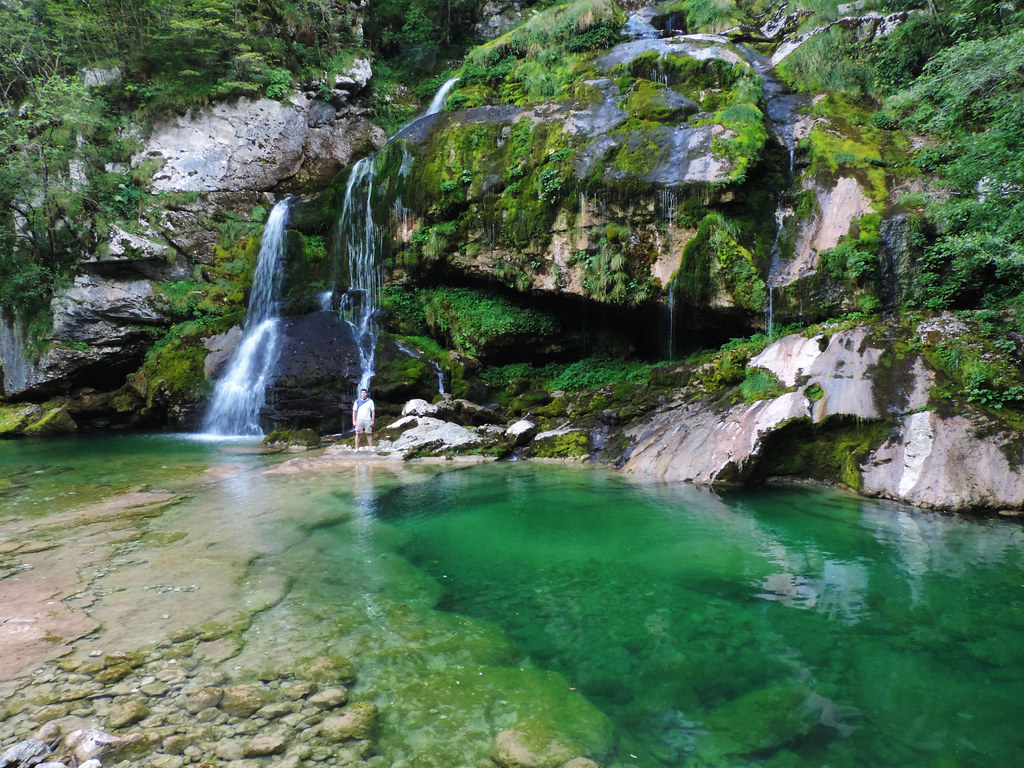 Another emerald green beauty is Virje that you can reach on a short trail from Plužna. You can even jump into its pool on a hot summer day – though we warn you it’s very cold. 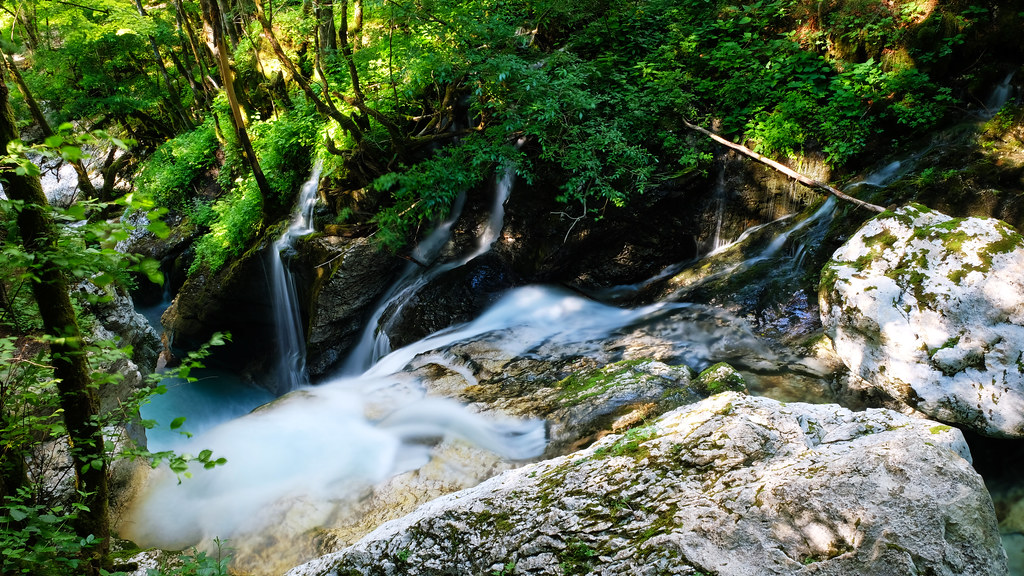 Guess what, it’s not only Soča River that’s special in this valley, but there are countless other crystal clear streams flowing into it, as well. Like Lepenjica Stream. Šunik Water grove is a series of pools, rapids and waterfalls on this stream. It’s about a 1 kilometer walk altogether, quite pleasant and easy, starting in Lepena Valley.

We did this walk late in the afternoon, and found it tranquil, quiet and captivating. 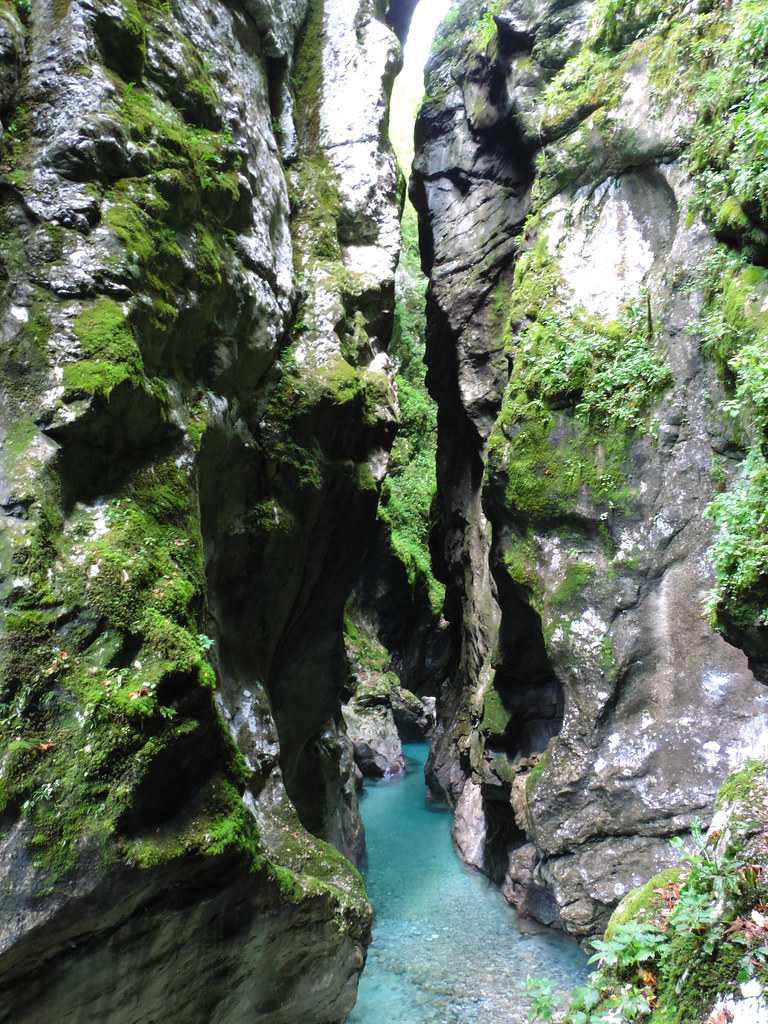 The “Soča Valley-version” of the famous Vintgar Gorge. The blue shades of Tolmin Gorges (near the town of Tolmin, of course) can be explored on a 2 kilometres long and relatively easy loop trail. (It’s the only attraction on this list that has a small entrance fee.) 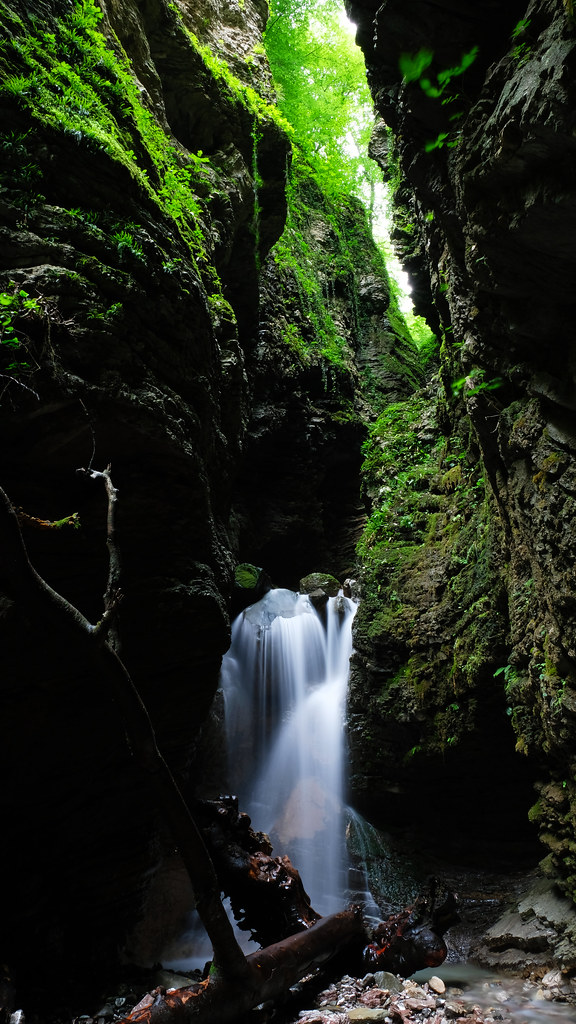 60 metres deep Koseč Gorges are not easily accessible, but an easy circular trail starting at the chapel St. Just in Koseč offers great views of them at certain points. Also, we could admire four waterfalls on the Stopnik Stream on that same trail.

Parking is a bit tricky, streets are narrow and space is not really available in Koseč, you’ll better park outside of the village at a pullout. However, we asked one of the locals about parking, and he didn’t only speak English but also allowed us to park before his house. 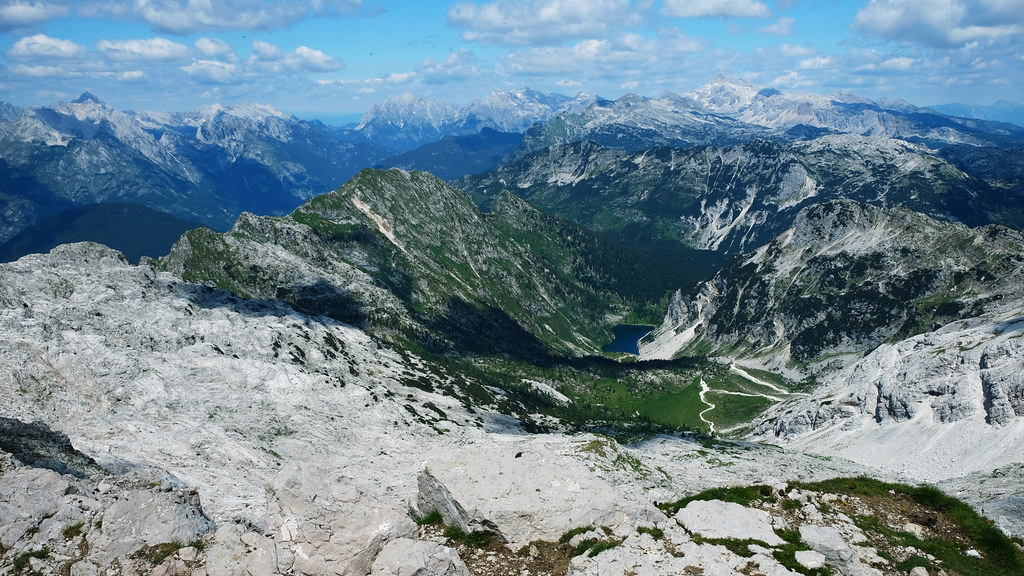 Krn peak at 2244 metres rewarded us with the most breathtaking panorama of the Julian Alps! Actually, it’s one of the best mountain panorama we’ve ever seen. To the north, all the peaks of the Julian Alps can be seen, with Triglav peak (2864 m) towering above them all. To the south, we could see as far as the Adriatic Sea. 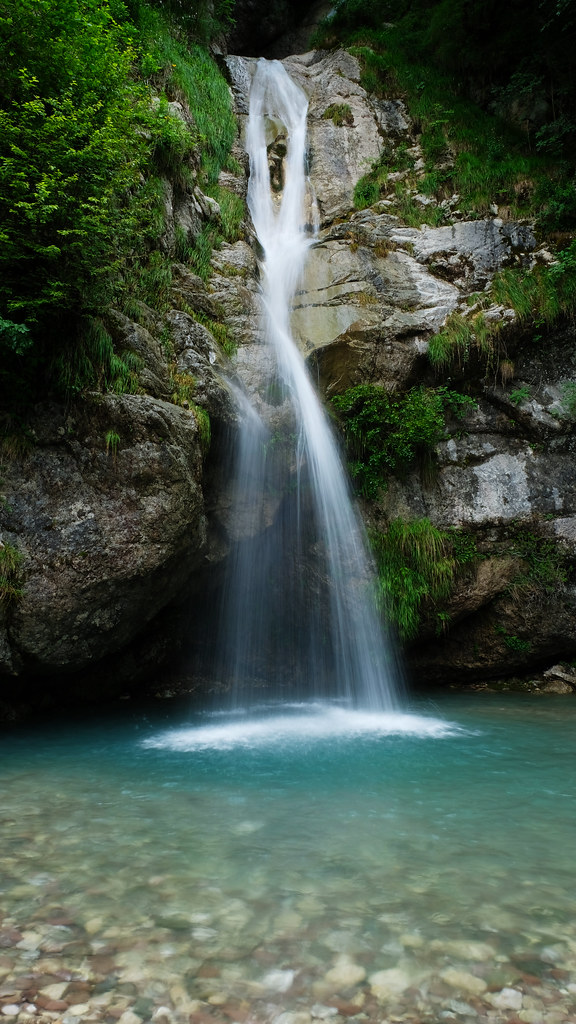 If you hike the loop through Koseč Gorges, then the waterfalls of Sopota and Krampež are really close. I mean, on foot. They’re like 15-20 minutes walk from Koseč and pretty enough so that they ‘re worth the extra walk.

If you like steep ladders and challenges, you can climb up to the top of Krampež waterfall. Then it turns out you only see the lower section of the waterfall from below. The climb itself takes like 5 minutes. (And no, we didn’t do it with Tomi in the carrier. We climbed up separately instead, while the other was taking care of Tomi who enthusiastically tried to eat the small pebbles from the pool of the lower falls.) 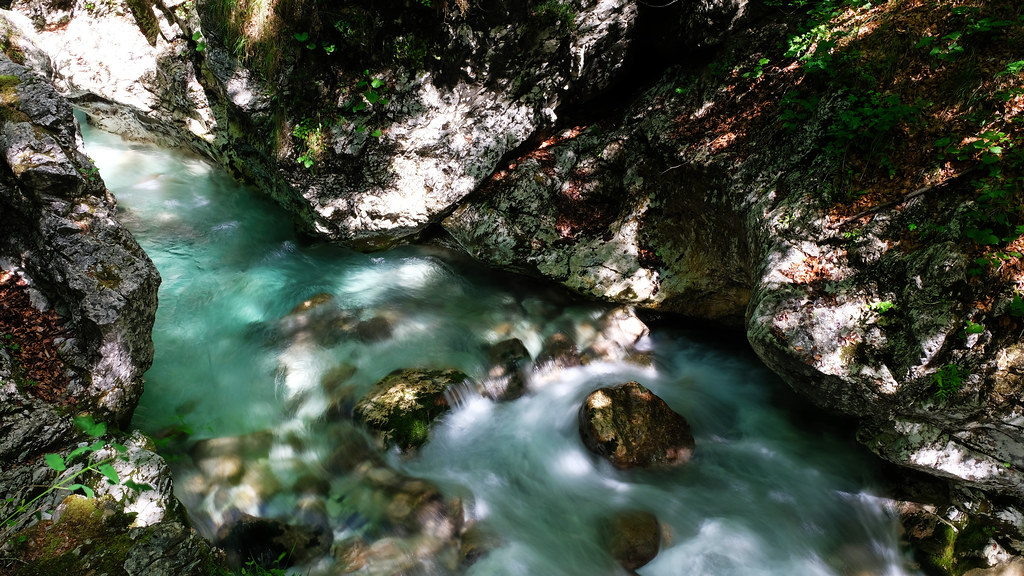 Možnica (also called Nemčlja) stream flows into the Koritnica River which later flows into the Soča River. All of them are clear, rushing and beautiful! Though Možnica Gorges are hard to access (again). Only a small part of them can be seen from a footbridge and a short trail which can be reached on a pleasant forest trail with some nice peak views.

There’s a small parking area dedicated to them behind Kluže fortress. On the way towards Log pod Mangrtom, look for a dirt parking lot on the left side. 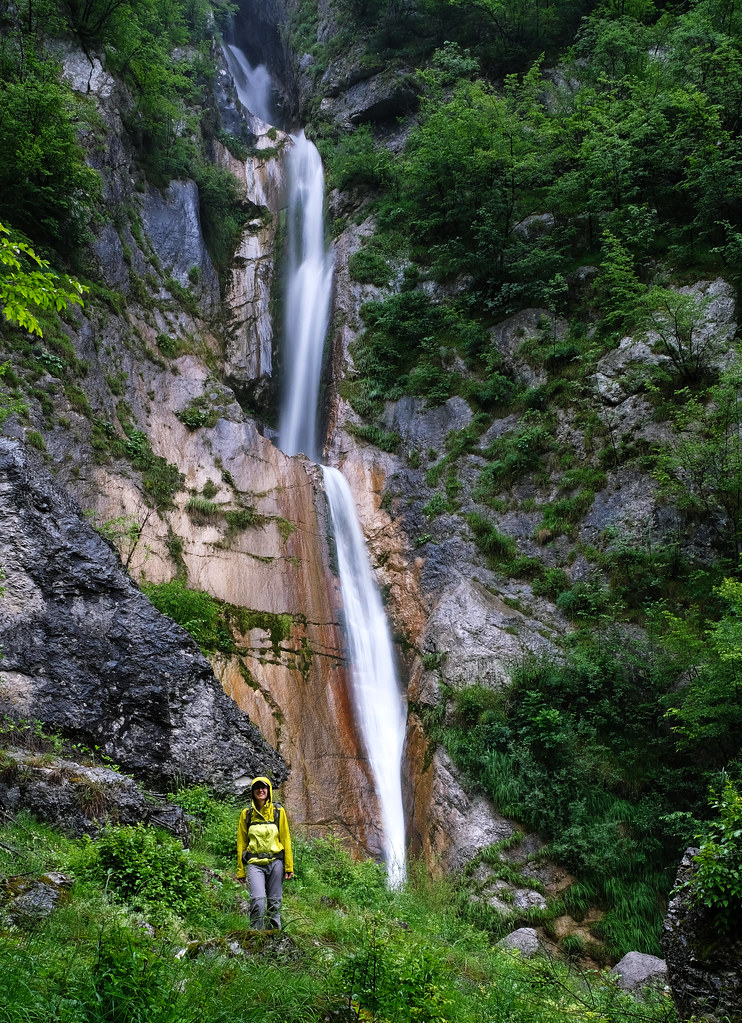 Another lovely, easy, lesser-known waterfall trail. Multi-tier Globoski potok waterfall is about an hour return hike from the town of Žaga. We also got distant views of Učja canyon deep down below us. It’s worth a bit of extra time if you visit famous Boka and Virje waterfalls, because it’s quite close to them. 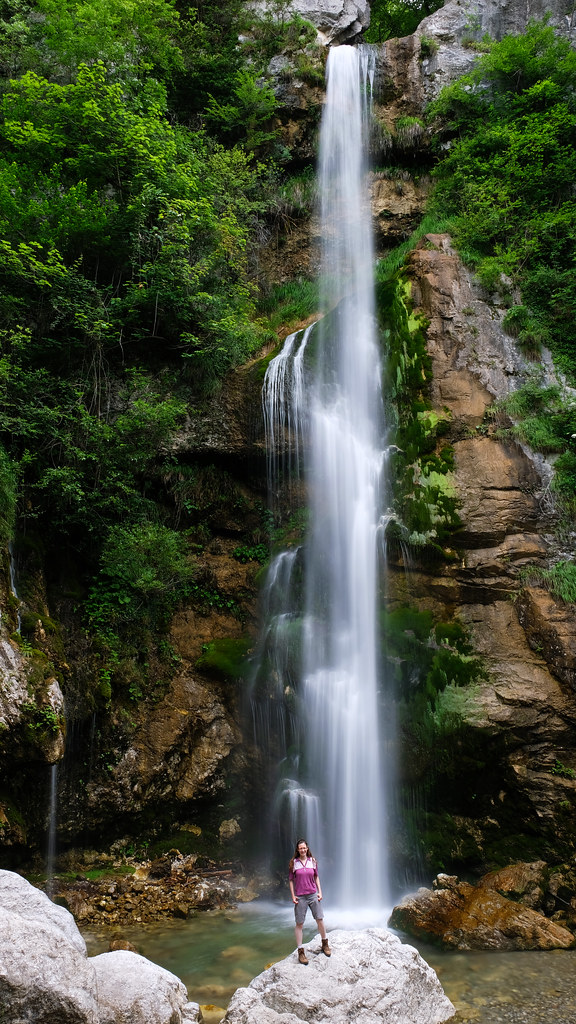 A nice and easy trail starts from Tolmin, offers some views of tranquil Soča River and ends at 25 metres tall Beri waterfall.

Have you been to the Soča Valley? Tell us what we missed! 😀