The northernmost point of our Australian East coast road trip was Daintree Rainforest. It’s a special place for several reasons. For one, I was so amazed walking in the rainforest that I barely noticed a huge spider just a few inches above my head – Csaba did though, and I couldn’t decide whether to be shocked about the spider itself, or the fact that I didn’t notice such a spider. Daintree, it’s your fault. 😛 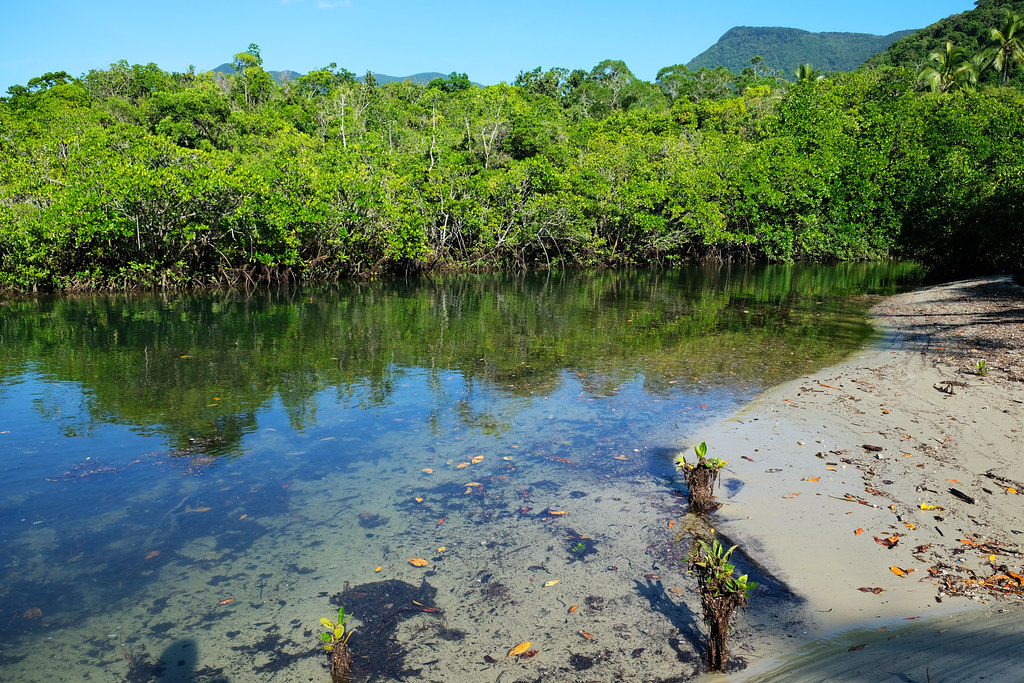 But instead of scaring you away, let’s talk about why Daintree is so special. (By the way, that was one of the few occasions we’ve seen a spider on our Australian trip.) First of all, it’s the oldest continuously surviving tropical rainforest in the world – even older than famous Amazon Rainforest. It’s estimated to be about 160 million years old!

Its flora and fauna is exceptionally diverse. It hosts primitive flowering plant species that has changed very few throughout the millions of years. One of the most famous is Idiospermum australiense, more commonly known as Idiot Fruit (funny people, these biologists). Anyway, observing plants that looked the same when dinosaurs roamed the planet is really cool. 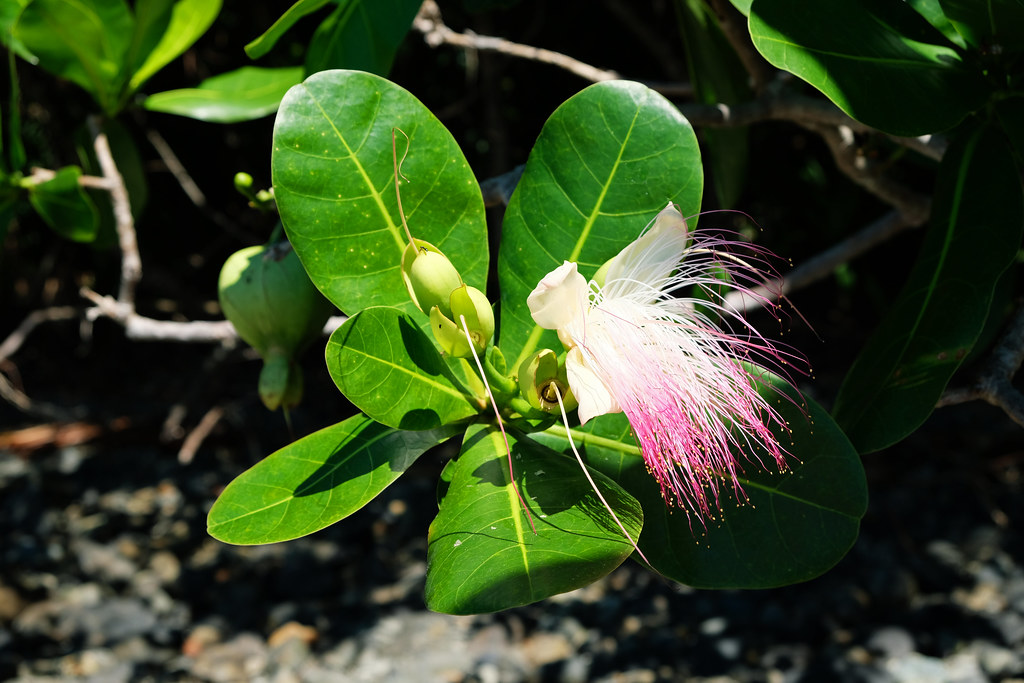 Daintree has 80% of the world’s fern species, and many of its inhabitants can only be found here. Like the cassowary. This large bird is similar to the ostrich, it’s a bit smaller and more colorful though. Cassowaries are considered the guardians of the rainforest, as they disperse seeds throughout the forest. And they are endangered.

Daintree is also one of those very rare places on Earth where rainforest meets the reef. Mangrove trees literally stand in the ocean at high tide. And they provide a safe nursery for several fish species (including jellyfish) to breed.

What to explore in 2 days 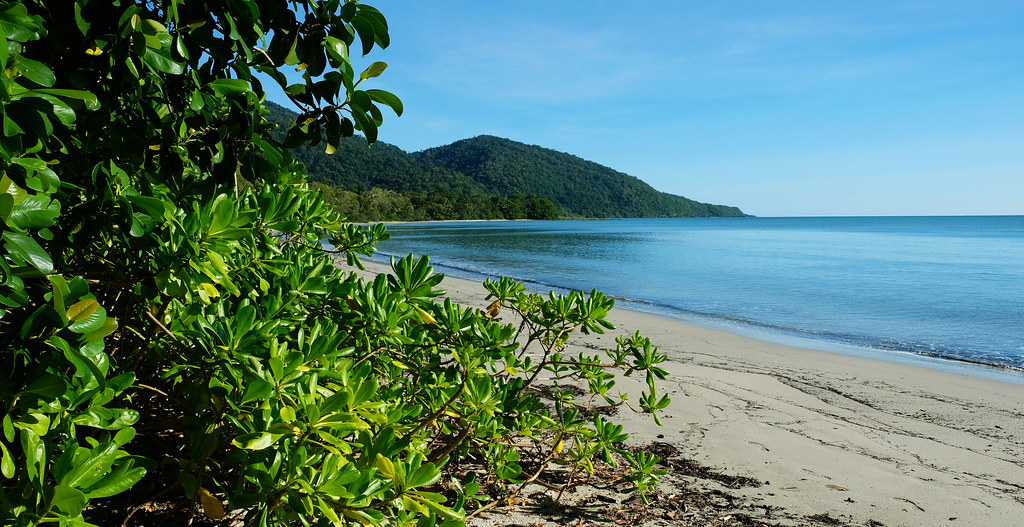 The Northernmost point we got to was Cape Tribulation. That’s where we started to explore the Daintree, and then continued our way southwards. Cape Tribulation is a headland where Daintree Rainforest meets the Great Barrier Reef. Cape Tribulation Beach is a wonderful tropical beach – where you better stay out of the water because of estuarine crocodiles (this is true for most of the beaches in Daintree National Park, by the way).

A short, nice walk, the Kulki Boardwalk starts from Cape Tribulation Beach, too. It leads into the coastal mangrove forest and offers views of the bay. We loved the colors here so much! The vibrant green of the rainforest and the magical turquoise of the ocean is a spectacular color combination. 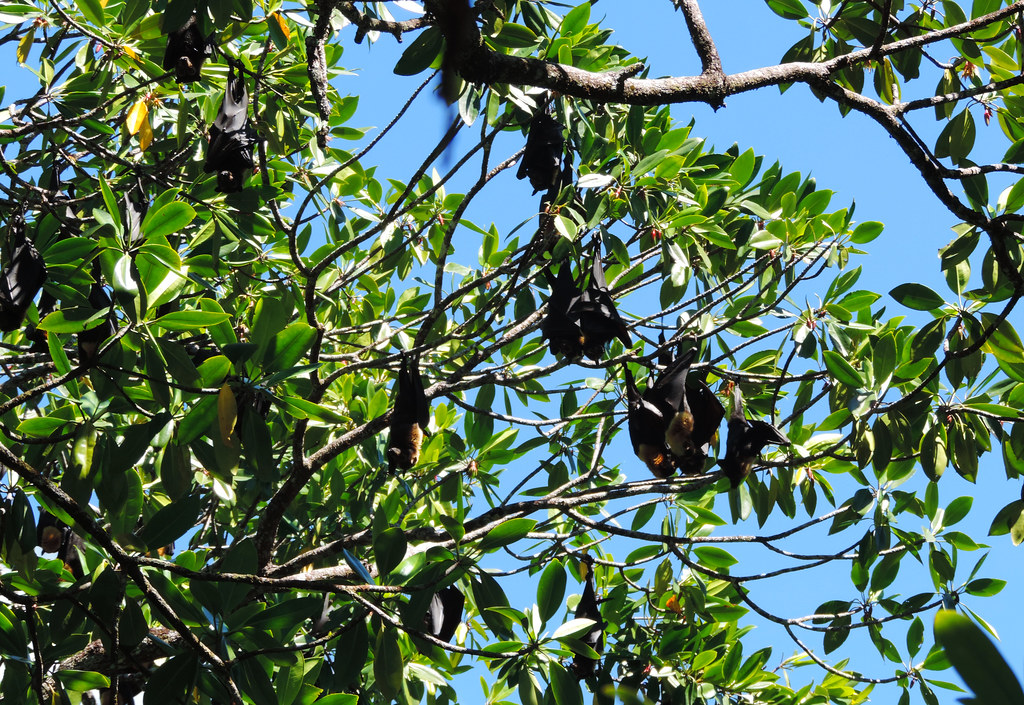 There are several easy walks that give insight into the mysterious everyday life of the rainforest. In addition to the Kulki Boardwalk, we walked the nearby Dubuji Boardwalk and Marrja Boardwalk. Both are about 45 minutes loop walks, and they lead through lowland rainforest and muddy mangrove habitat.

This was the first time we’ve seen mangroves – and wow, they are another type of fascinating trees we’ve discovered in Australia! Signs along the boardwalks label various plants, and we could read about their evolutionary journey.

We made a detour from Dubuji Boardwalk to Myall Beach. It’s another postcard perfect tropical sandy beach where you are not supposed to swim. But taking a romantic walk on the abandoned beach while you might spot some crocodiles in the water is also an option. We thought it’s a tempting one. 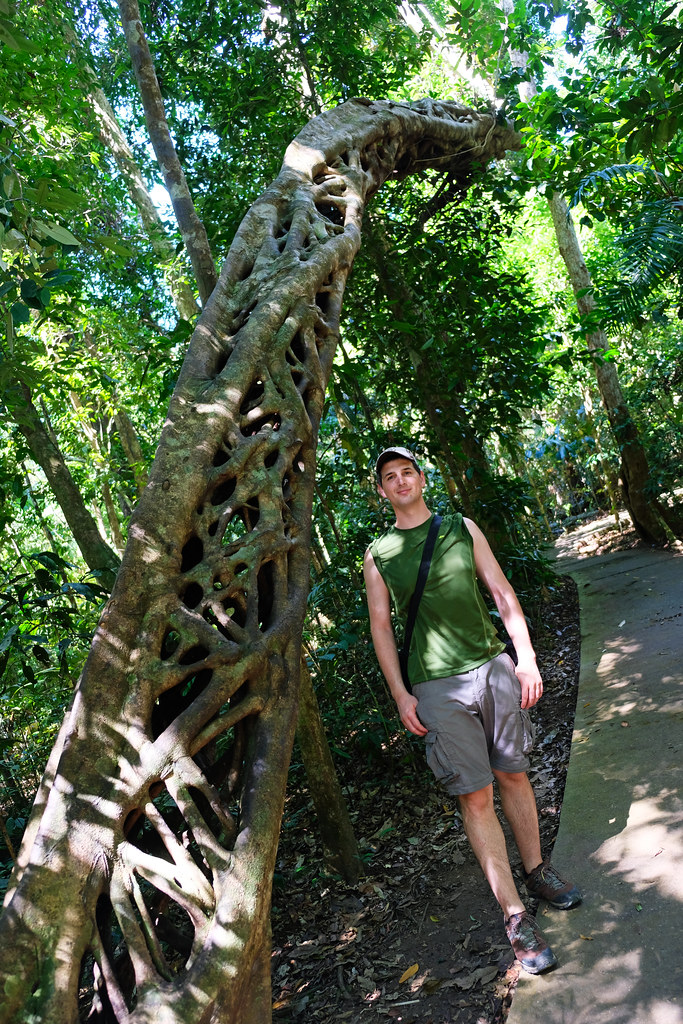 The longest hike we did in the Daintree was the Jindalba circuit track at the base of Mount Alexandra. It’s a 3 kilometres long loop in the rainforest (about 1.5 hours), crossing several smaller creeks. It’s quite easy, but it’s a real hike, you definitely need proper hiking boots for this one.

Mount Alexandra Lookout is close by, and it’s worth a stop. It offers views of the coastline from above.

Then we drove to Cape Kimberley Beach on a dirt track. It’s right next to the estuary of the Daintree River, so definitely no swimming here. Estuarine crocodiles like estuaries, and they especially like the Daintree River. It’s a nice tropical beach, but we found Cape Tribulation or Myall Beach more spectacular – and those are also more easily accessible. If you have to skip something, it could be Cape Kimberley Beach. 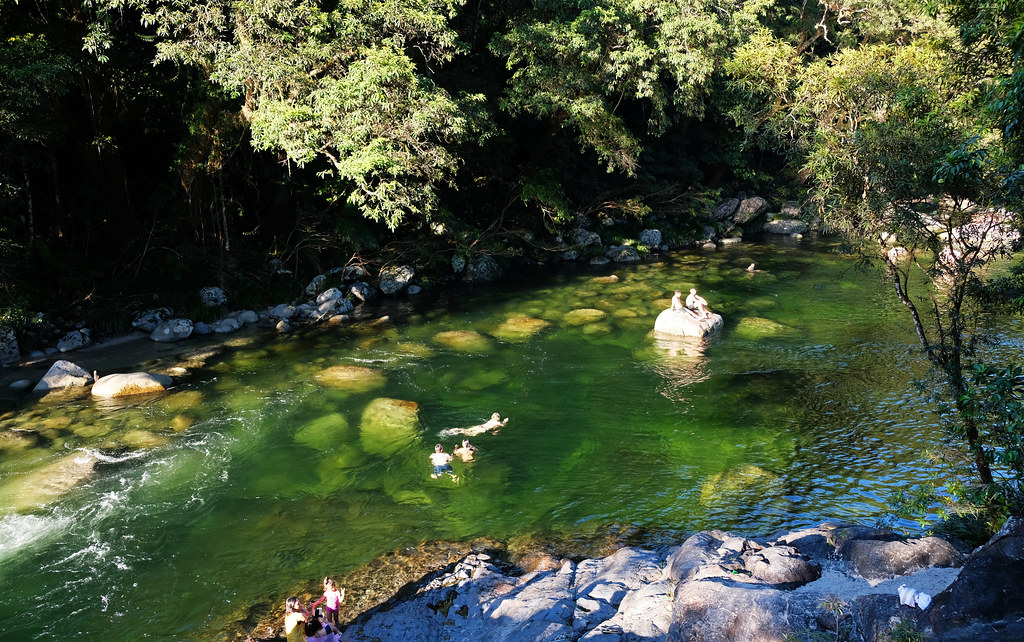 Mossman Gorge is south of the Daintree River, it’s the only place of all the mentioned ones that doesn’t require a ferry-crossing. And it’s a great place to explore and chill out!

Several short and pretty trails start from the Mossman Gorge day-use area, and you can even swim at some places if weather conditions are fine (not in the wet season). It’s a great place to even spend a full day – and we were so sorry that we didn’t have that much time. We didn’t expect we’d love it so much, so we arrived late in the day. 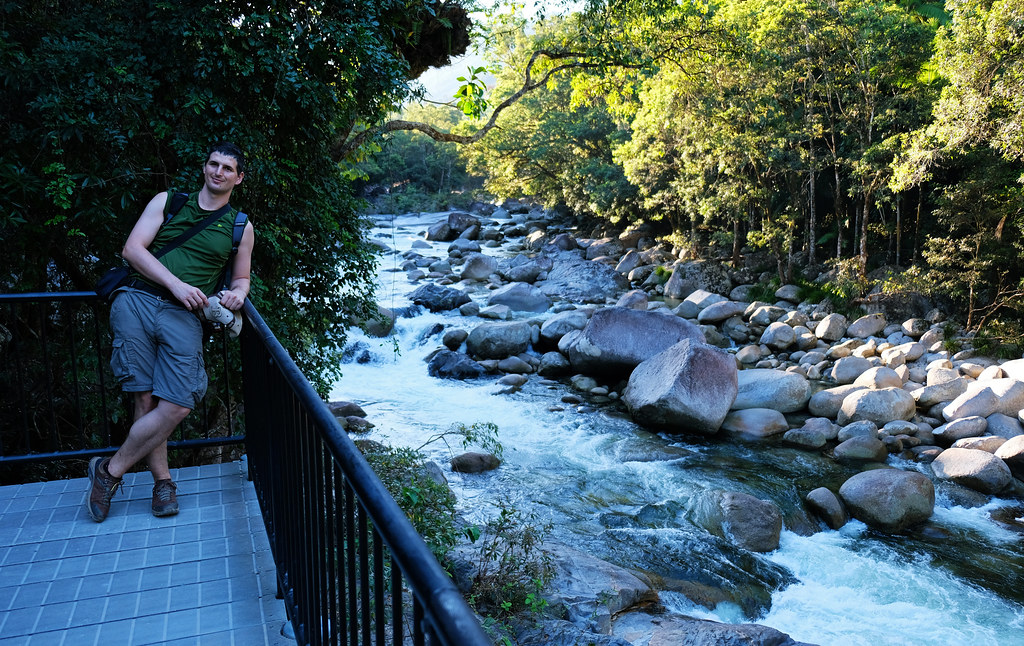 The tracks are all worth exploring. Each of them are short and easy, a couple of hundred meters that you can cover in 15 minutes. If I don’t count the dozens of pictures you will want to take.

Baral Marrjanga track is an elevated boardwalk so we could get a closer look at the canopy. At the end, we could continue on Rex Creek Bridge track. As its name says, there’s a suspension bridge over Rex Creek, near where it joins Mossman River, so we got nice views of the large rocks and small cascades down there. Low River track runs along the river bank of Mossman River.

The Mossman Gorge day-use area can only be accessed by a shuttle bus. It’s quite frequent though, and the ride takes 20 minutes from the Mossman Gorge Center where you can leave your car. More info on the shuttle here!

Our favorite wildlife experiences in the Daintree 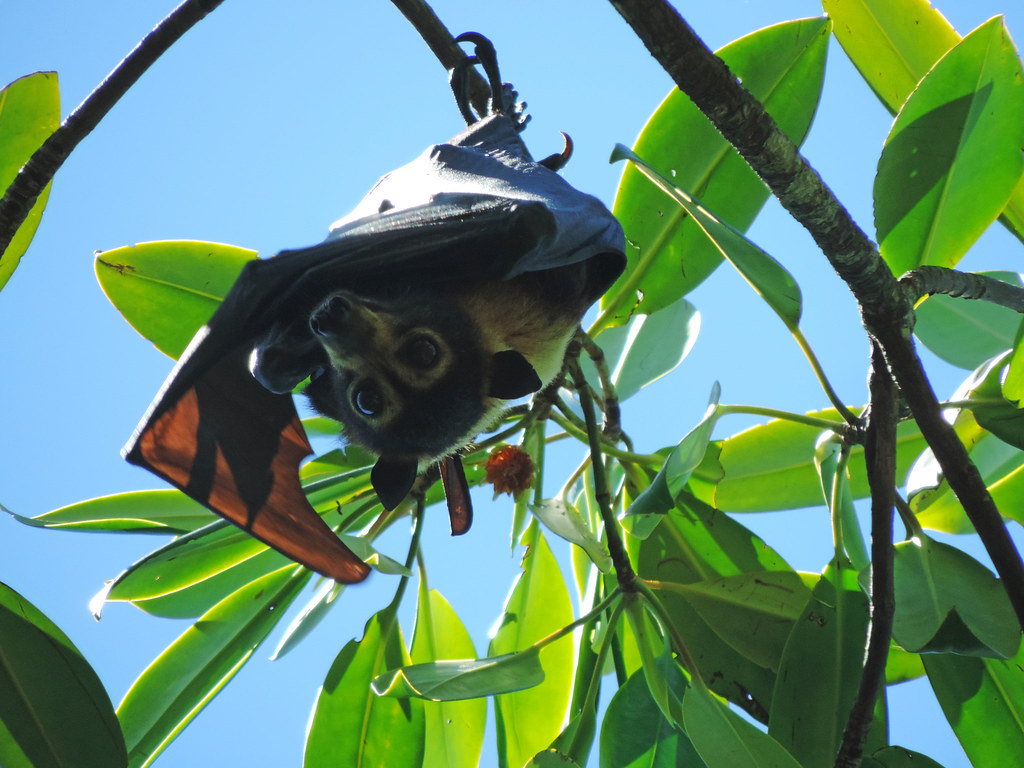 Even plants are special – and look special – in an ancient rainforest. And then there are the animals. The cutest creatures we encountered there were the flying foxes. Not one or two, but hundreds of them, lying down from the trees while we were taking one of the short rainforest walks. We heard them earlier than we saw them. Their voice are not exactly what I’d call pleasant, still we couldn’t help staring at them for a long time. 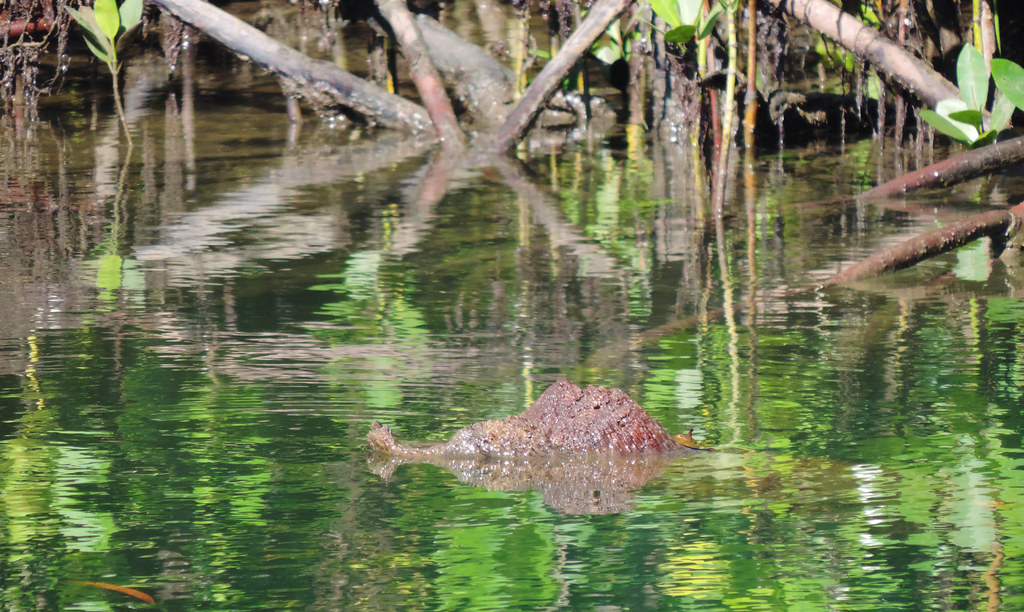 The other memorable encounter was an estuarine crocodile – and I mean memorable in a good way, luckily. We spotted it in the water while walking on one of those fairy tale tropical beaches. He was motionless and looked almost like a log. But at second glance, it was obvious it’s not. Now we’ve seen crocodiles in zoos several times before. But seeing an animal in the wild is different. Each occasion is an unexpected gift, and we cherish those rare moments. Like those long, still minutes staring at the crocodile.

We hoped to spot a cassowary, but that didn’t happen. Even locals said they rarely see one. The other adorable creature we read about living in the Daintree is the tree kangaroo. But since they live high in the canopy, and they are very shy, we didn’t really expect to see one. However we didn’t see any snakes either, they also like sunbathing in the canopy.

How to get to the Daintree Rainforest? 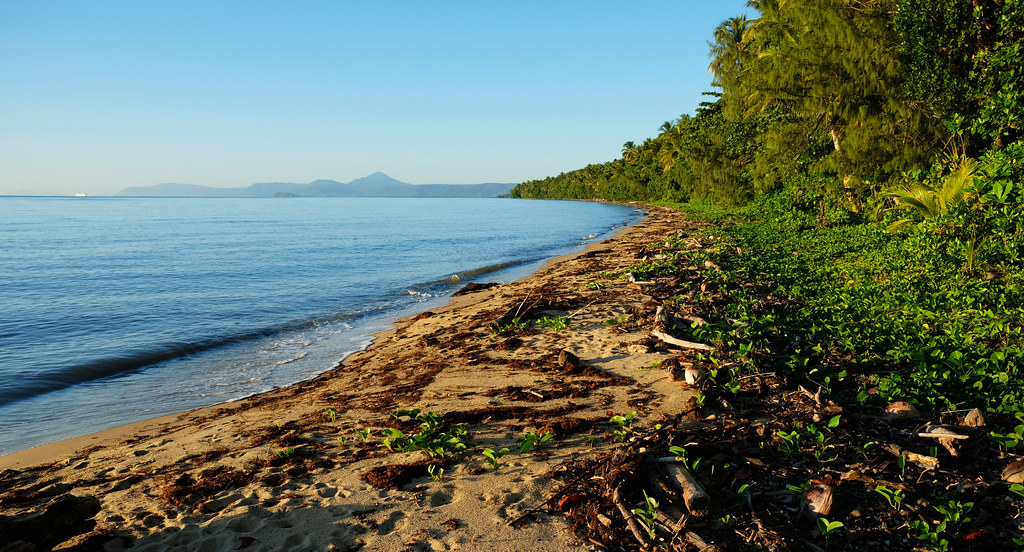 The only way to get to the Daintree Rainforest is crossing the Daintree River by ferry. (Mossman Gorge is the only exception.) There is no bridge, and that means two things. One is that when there are a lot of visitors, you can expect some time waiting in line for the ferry. Though it’s quite frequent, but not a very large ferry. The other thing is that when heavy rain and high tides cause flooding along the Daintree River, the ferry gets closed. It usually happens only in the wet season though, roughly from December to March. 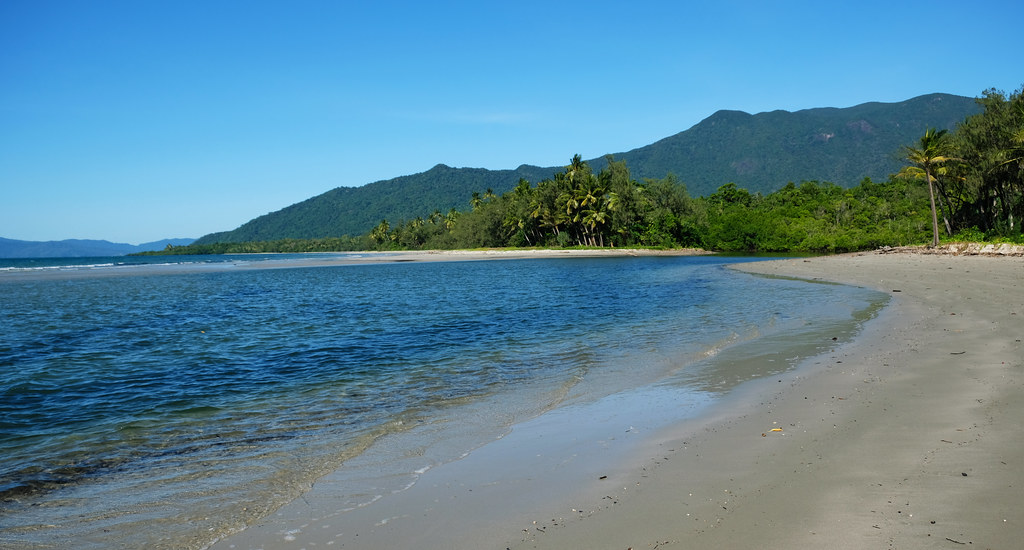 We did a campervan road trip, so we were looking for campgrounds, or a designated free site where you are allowed to stay overnight. We didn’t find the latter anywhere close to Daintree. But there are plenty of campgrounds, caravan parks and holiday parks. Our favorite was the Wonga Beach Caravan Park where we literally slept on Wonga Beach, and we woke up to a beautiful sunrise.

The closests city is Port Douglas, but you can find hotels in smaller towns, too, that are closer to the rainforest: Mossman, Wonga or Daintree. There are some hotels and bungalows north of the Daintree River, but expect higher prices if you choose them.

Have you ever been to a tropical rainforest? What did you find the most exciting?