Dubrovnik, You’re Easy To Fall In Love With

Dubrovnik, You’re Easy To Fall In Love With I’ve been to Dubrovnik as a kid with my family for the first time. We’ve spent one or two weeks in Croatia quite a few times in the summer during my childhood. After moving back to Hungary from California I knew Croatia will be one of the first countries I want to visit. And I praised it so often that Csaba – who has never been to Croatia before – was eager to visit, too. 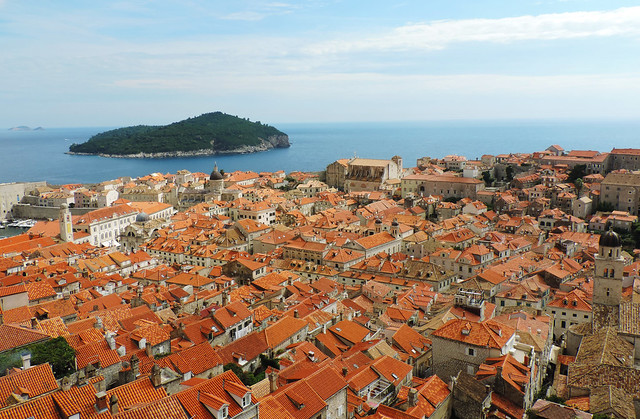 So we had our 10 days road trip in the beginning of September. We couldn’t name a few highlights from this trip because it was amazing from beginning to end. Croatia seemed to be even more wonderful in reality than it was in my memories. Though I was a bit afraid that Dubrovnik won’t be able to live up to that fantasy capital of dreamland in my sweet childhood memories, I turned out to be wrong.

Dubrovnik was a fairy tale place for the second time, too. It actually became one of our favorite cities in the world! (I know, I know… Probably we use this term too often. But this time it’s absolutely true, believe me. 😛 ) 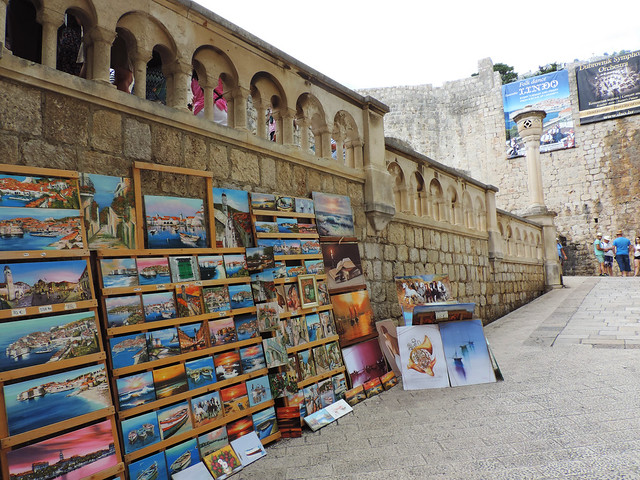 Dubrovnik is a city on the Adriatic Sea in Southern Dalmatia, Croatia. Originally called Ragusa, it was founded in the 7th century and it became a prosperous harbor and a rival of Venice and other Italian maritime republics for centuries. In the 19th century it was part of the Habsburg Empire and after the Second World War it belonged to Yugoslavia (along with the rest of Croatia). Today’s Republic of Croatia declared its independence in 1991.

Being an independent, merchant republic for 700 years and being one of the most significant Croatian ports nowadays, Dubrovnik has a unique and rich cultural heritage. 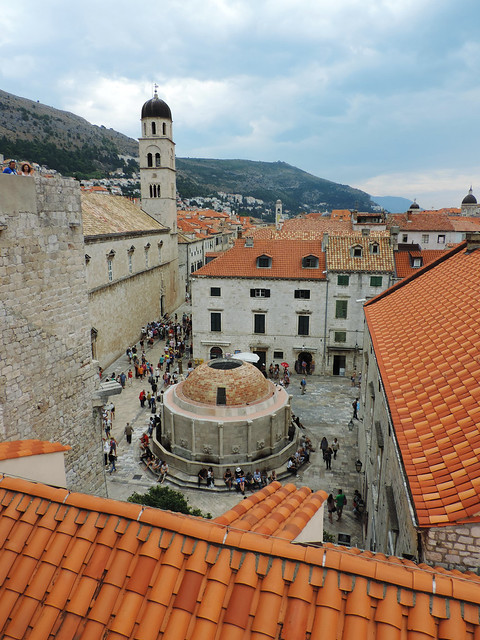 Damaged in several wars, but rebuilt again and again to its former beauty, Dubrovnik has one of the most preserved and perfect old towns in Europe. Walking on the narrow, cobblestone streets is like travelling back centuries before and its vibe is that of a lively Mediterranean harbor with the smell of roasted fish on the streets.

The entire Old Town is located on a peninsula and it’s surrounded by the Adriatic Sea and the thick city walls that run almost 2 kilometres around it. Even today the only way to access historical Dubrovnik is through one of the three gates: the Pile Gate, the Ploce Gate and the Buža Gate.

Walk on the city walls! 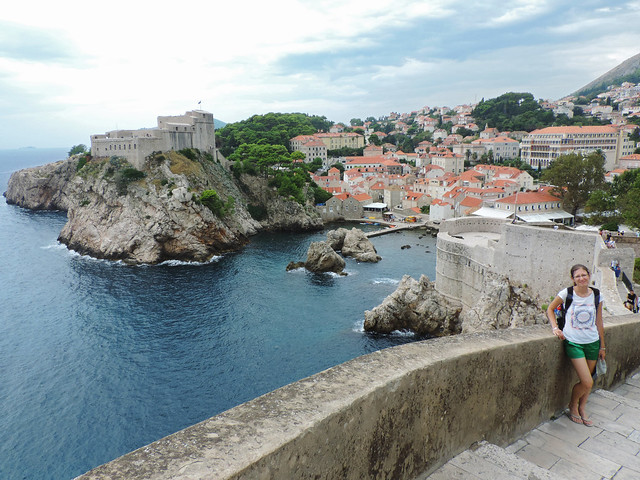 Our favorite way to see Dubrovnik was from above though – while walking on the city walls. It offered panoramic views of the stunning churches and squares of the Old Town, the harbor, the coastline, the Adriatic Sea and the island of Lokrum, and all those countless red roofs and narrow streets from above. Every step of this 2-3 hours long walk was pure joy as we enjoyed different angles of the same amazing panorama all the way around. 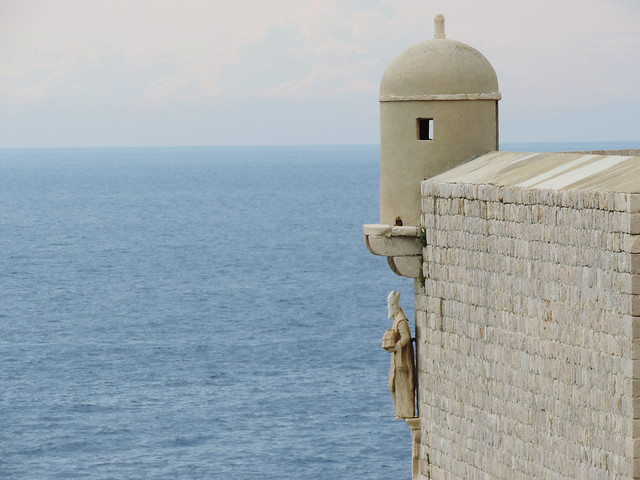 But there are some important facts to consider so that you can truly enjoy your walk on the city walls. First of all, there’s entrance fee so you can’t just walk up and down the stairs whenever you please. There are opening hours, too – they vary based on the season, you can check them here.

When to visit then? Early morning and late afternoon are the best in our opinion. First, because most tourist groups arrive between 11 am and 4 pm (including those arriving on cruise ships) and they can make the walls very crowded. On the other hand, there’s hardly any shade on the walls, and Dubrovnik is a sunny Mediterranean city. Walking around on the walls in the middle of a hot summer day will probably kill all the enjoyment. 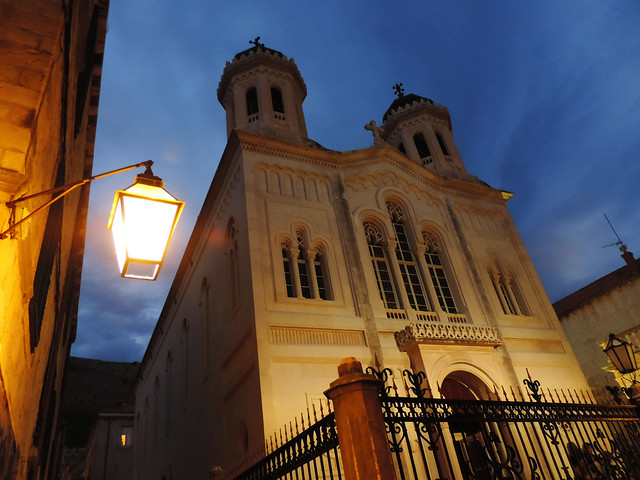 We entered the Old Town through Pile Gate first and the entrance itself already impressed us. Then there were Onofrio’s Fountains and Stradun right in front of us. Large Onofrio’s Fountain is one of the most spectacular of the several ancient fountains everywhere in the Old Town. They operate as drinking fountains even today and you’ll be happy about it especially on a summer visit. 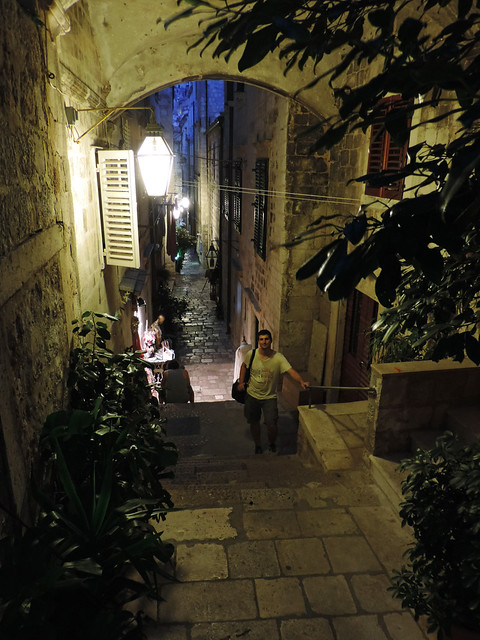 Stradun is the main walking street of the Old Town. Its surface is glossy and slippery due to the millions of people walking there. But it is a wonderful street to walk! It leads to the huge Franciscan Monastery and to the Rector’s Palace. It used to serve as the seat of the Rector of the Republic of Ragusa between the 14th and 19th centuries. It was built in Gothic style but harmoniously combines Renaissance and Baroque elements, as well.

The most famous churches of Dubrovnik Old Town are Church of the Holy Savior, the Cathedral and Church of St Ignatius Loyola.

Getting lost in the narrow streets 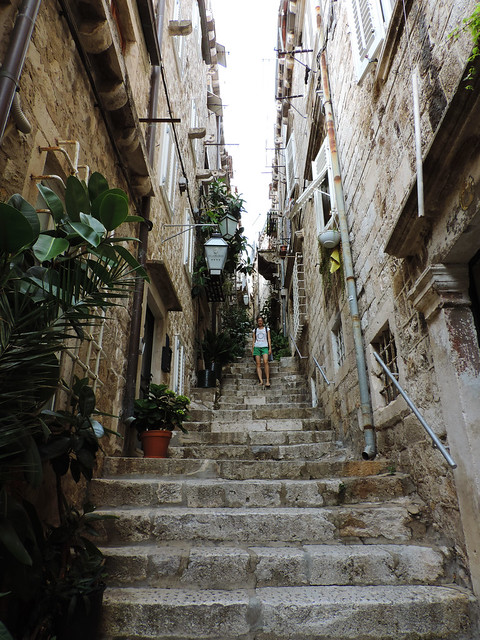 But you don’t really need any advice to find fabulous places in the Old Town. All you need to do is keep on walking. Explore the narrow streets, climb the even narrower stairs and let them steal your heart.

Trip to the island of Lokrum 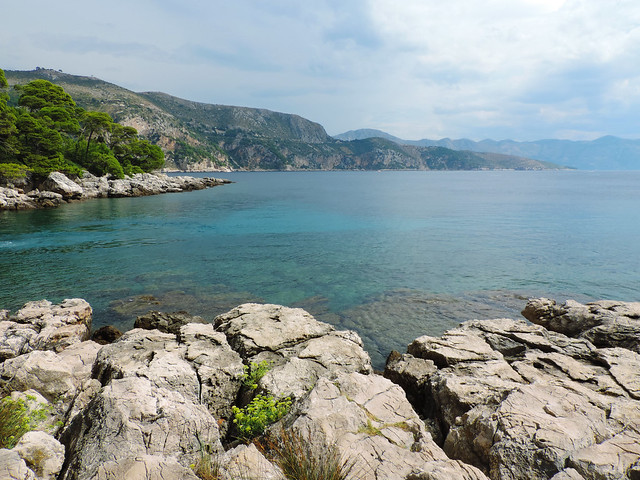 We knew that one day won’t be enough for Dubrovnik. Especially because we wanted to have a trip to the island of Lokrum that’s very close to Dubrovnik’s Old Town and there’s a regular ferry to the island from the port of the Old Town in the summer season. 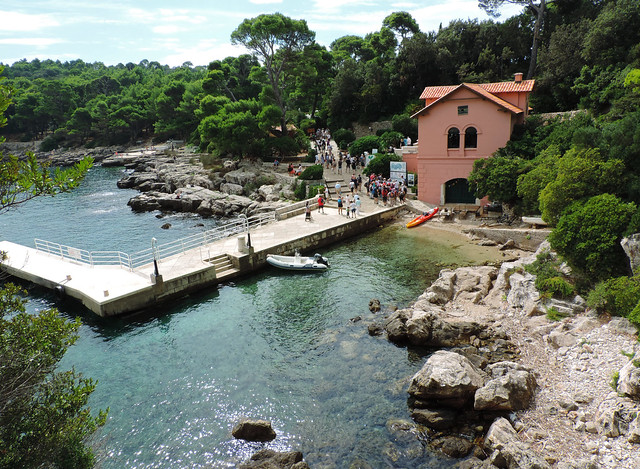 So we started our second day early in the morning at the port and caught one of the first ferries. Lokrum is just 600 metres from Dubrovnik so the ride didn’t take much time. This small island is just the perfect getaway from busy Dubrovnik!

No people actually live on Lokrum and you are only allowed to stay there during the day. It’s so tiny that half a day is enough to walk around the whole island – and it’s worth walking around! We found crystal clear, blue bays along the rocky coastline, and the ruins of a Benedictine abbey and monastery are hidden in the Mediterranean pine forest. 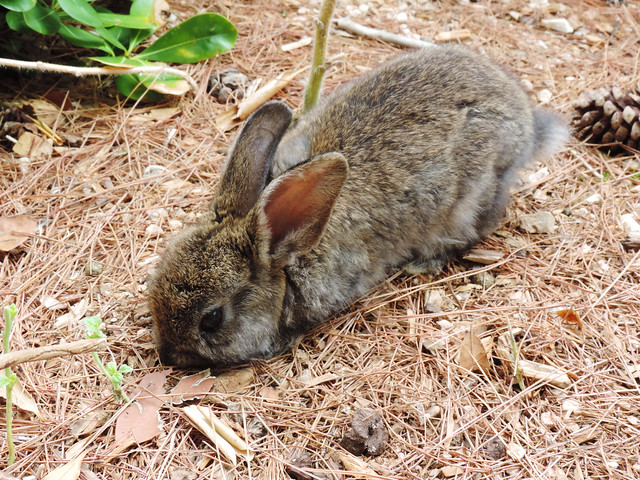 There’s a botanical garden with countless cactus species and other exotic plants. And there are the permanent residents of Lokrum: peacocks and rabbits wherever you go. Most of them are not afraid of people at all, but they were not very patient posing for my photos. The highest point of Lokrum is at 96 metres above sea level. There stands the ruins of Fort Royal Castle that offers amazing panorama. 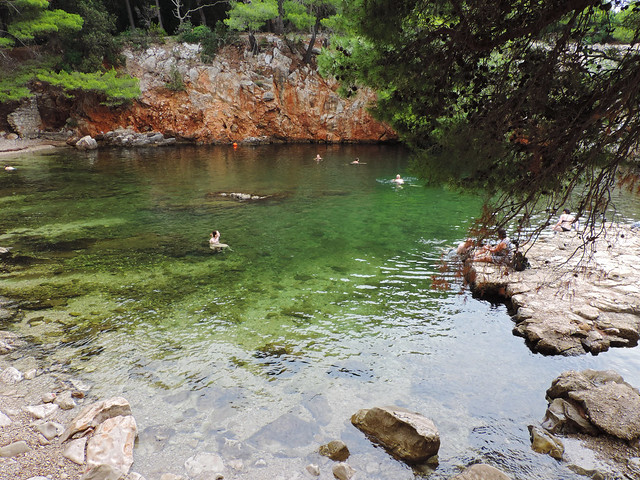 But the best thing to do on Lokrum is bathing in the tiny salt lake in the middle of the island. The emerald green color of its water goes quite well with the surrounding huge, red cliffs. We’ve only got back to Dubrovnik by late afternoon and we could only recommend you to explore this pretty little island. 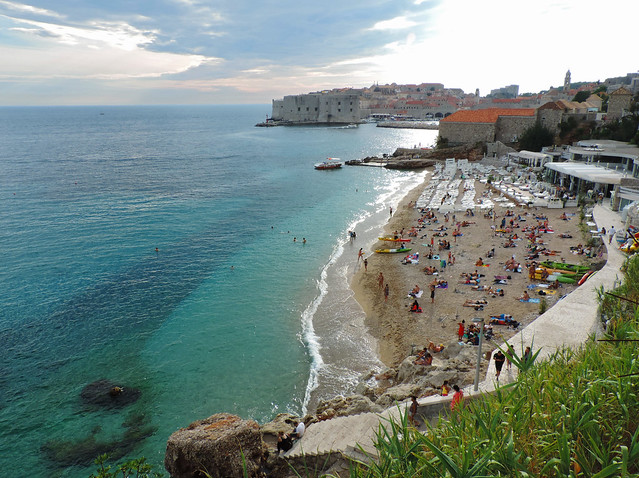 If you are looking for a beach in Dubrovnik though, you need to leave the Old Town. Banje Beach is the main beach in the city and it took us about 15 minutes to walk there from Ploce Gate.

It was refreshing to have a swim at lively Banje Beach with the views of the Old Town, but honestly, you’ll never find the best beaches in large cities, and it’s true for Dubrovnik, too. It’s a wonderful city, but if you are looking for secluded, beautiful beaches, give a chance to Lokrum or just start driving northward along the Adriatic coastline. 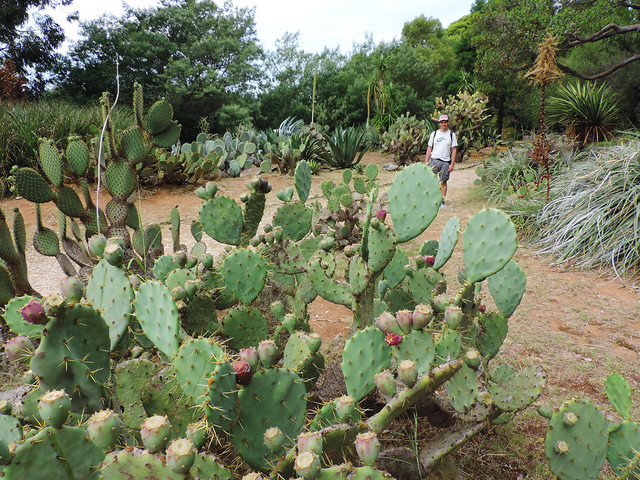 Dubrovnik is one of the most popular destinations in Croatia. The filming of the Games Of Thrones in the city made it even more well-known. It’s actually struggling to handle all the tourists visiting it during the summer months, and there are plans to drastically limit the number of tourists in the Old Town in the following years. 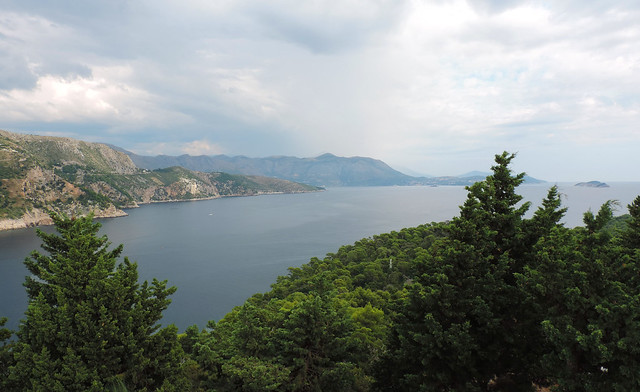 As far as we know, it means cutting down the number of cruise ships arriving to the Old Town’s port daily, but they also monitor the number of tourists entering the Old Town. It’s for the protection of Dubrovnik’s unique heritage and also for the safety of visitors. With that said, you better avoid Dubrovnik in the summer. Not just because of the restrictions, but also because of the heat and the crowd. 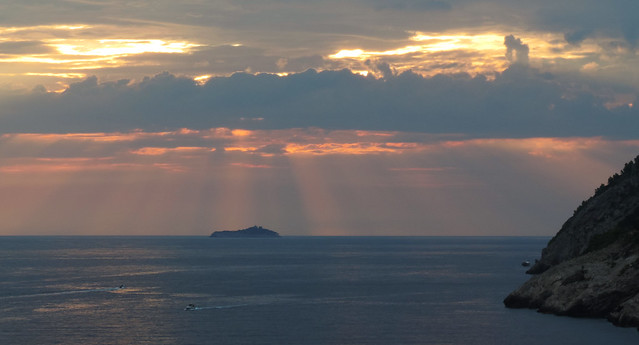 Our favorite time to visit Croatia is early September. The weather may still be nice, the sea may still be warm enough for swimming and it’s less crowded and less expensive than in summer. It’s a much better time for sightseeing in Dubrovnik, as well. If you’re not concerned about swimming or sea temperatures that much, you have even more options: anywhere between late April and October. Winter is not freezing, but it’s said to be very windy.

Have you ever been to Croatia?