Ireland is famous for ruins. Abandoned, romantic ruins that look like they are stolen from a storybook and took you back in time… centuries ago. We show you 6 astonishing ruins that we found on our road trip around Ireland and Northern Ireland the past year.

Because Ireland is that country where you can often spot ruins when driving on country roads. And where those abandoned ruins have such a romantic, mysterious atmosphere. But being abandoned also means that they’re free to visit, and they don’t have opening hours – with one famous exception. So let’s see the best ones we’ve found. 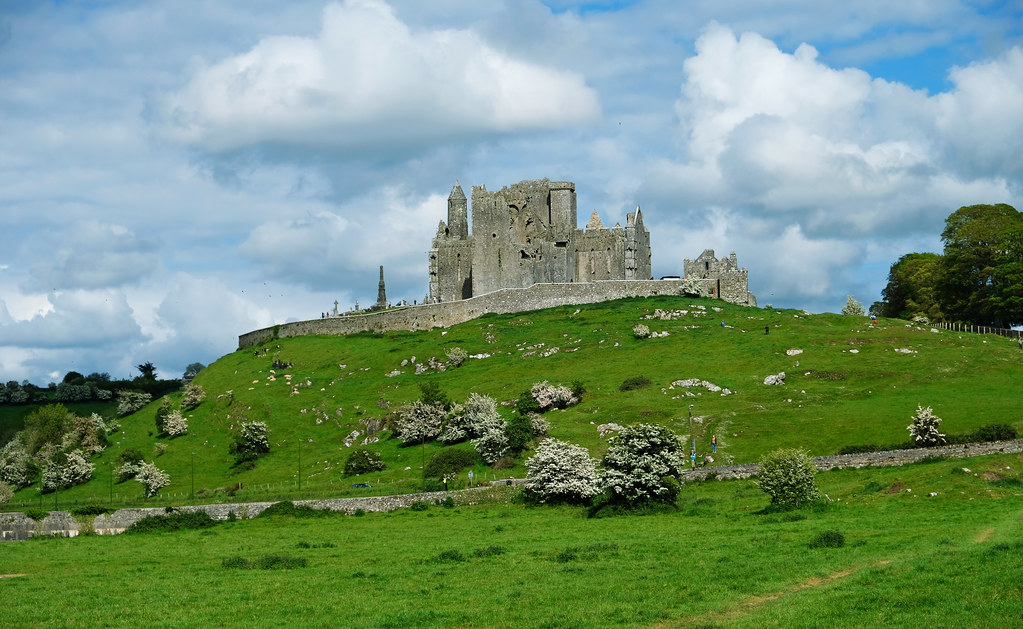 So that famous exception is the Rock of Cashel, also called St. Patrick’s Rock, a spectacular group of medieval ruins from the 12th and 13th centuries, sitting on top of limestone rocks above the town of Cashel. It’s the site of legends – like the legend that tells how St. Patrick banished Satan from a cave which resulted the rock’s landing in Cashel. It’s the site of kings, as well, since it was the seat of the kings of Munster for several hundred years. Then it was donated to the Church.

Today it’s one of the most remarkable and picturesque pieces of medieval architecture in Europe. While anyone can take a look at the Rock of Cashel, the complex is walled, and there’s an entrance fee if you’d like to take a closer look. It’s absolutely worth though. We were amazed by the ruins of the Gothic Cathedral, the Romanesque Chapel, the 15th century castle and the old graveyard. 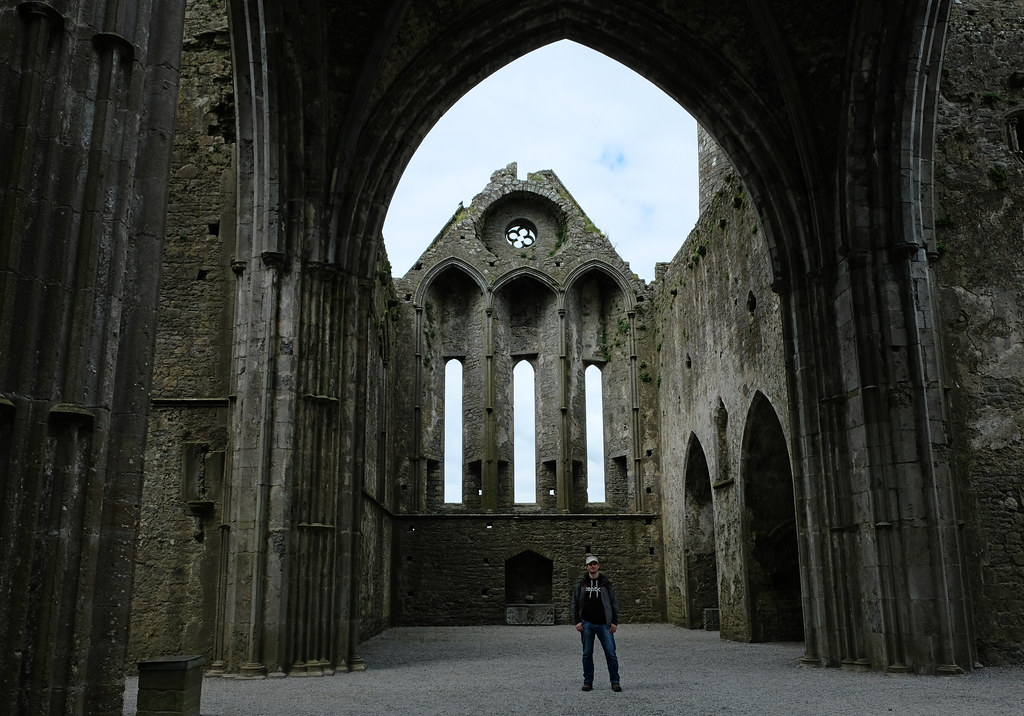 It’s a heaven for photographers, too. We liked the roofless cathedral the most. And our favorite picture of the whole complex was taken from behind as we walked to the nearby ruins of Hore Abbey… 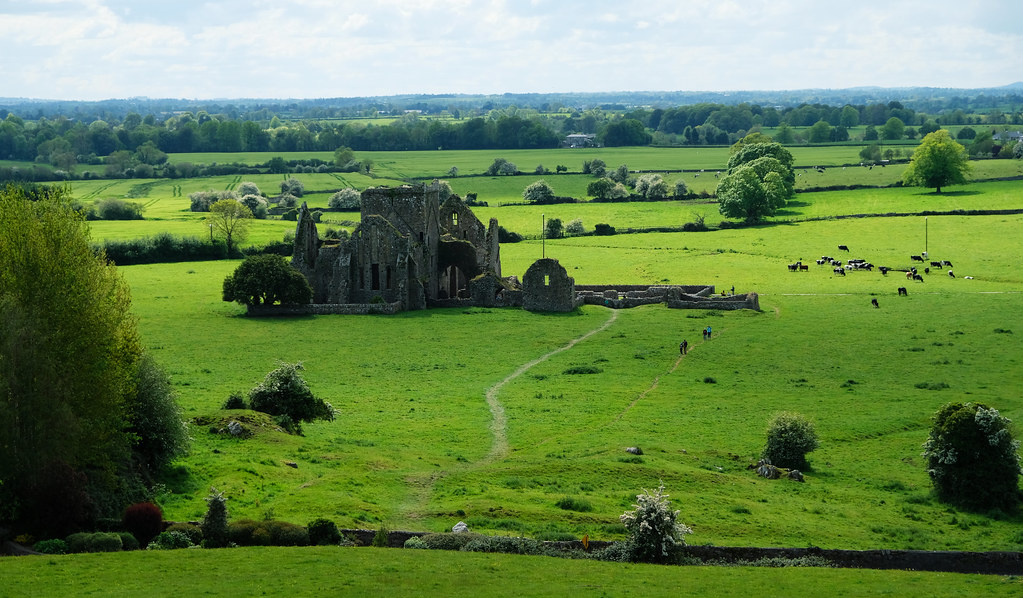 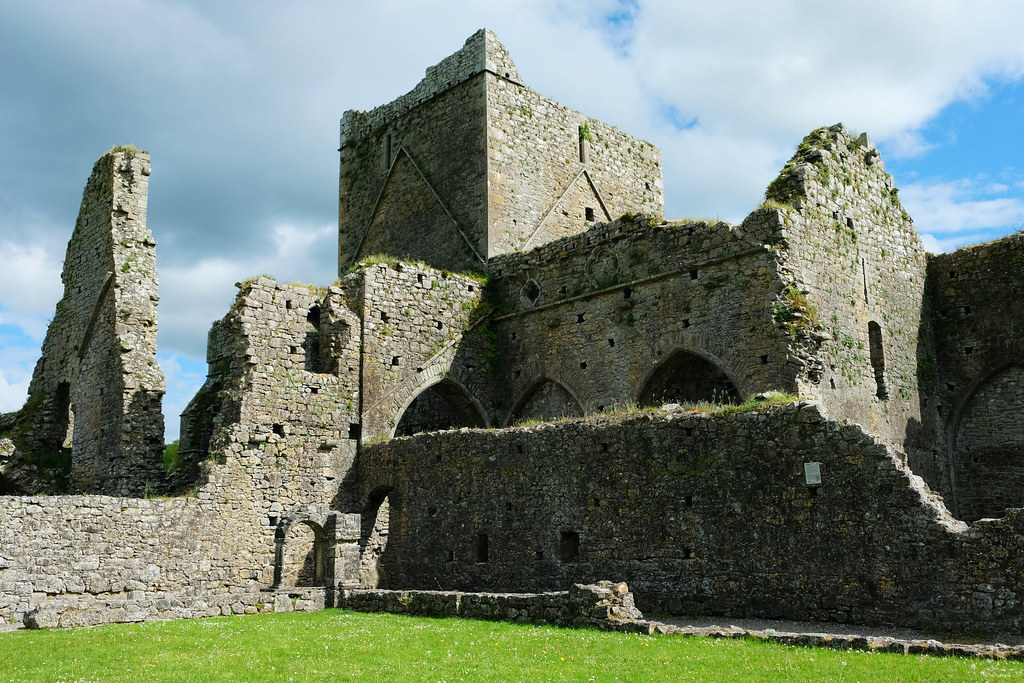 One of our favorite stops on the Ring of Kerry scenic drive is Ballinskelligs Castle. The abandoned tower house from the 16th century might not be such a spectacular site if its surroundings weren’t so pretty. But they are! 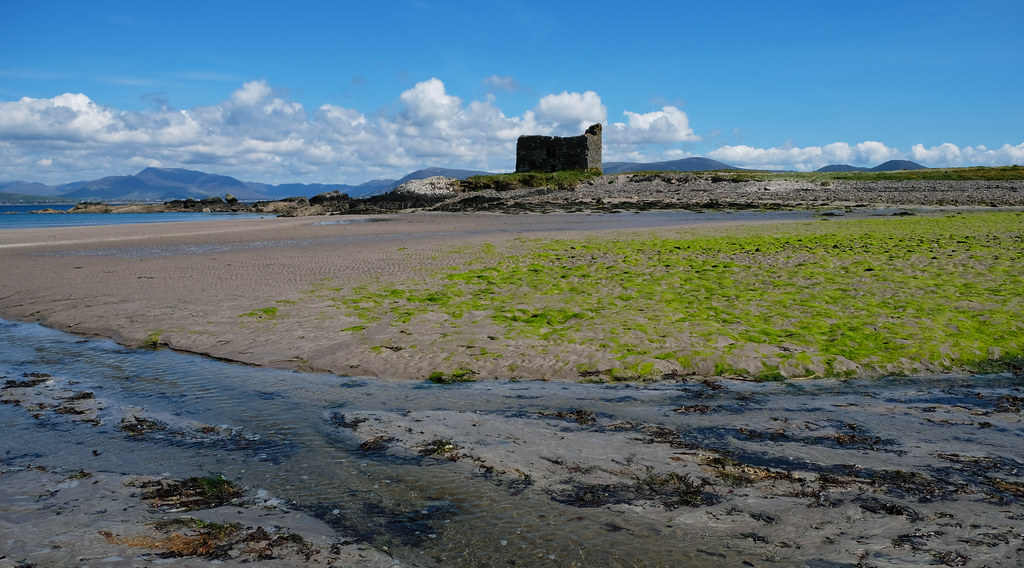 The ruins tower above wonderful, turquoise Ballinskelligs Bay on the Iveragh Peninsula. Visiting in spring we found countless pink wildflowers on the sea cliffs around the castle. It’s also known as McCarthy Mór Castle and was built to protect the bay from pirates, and also to charge a tariff on incoming trade ships. 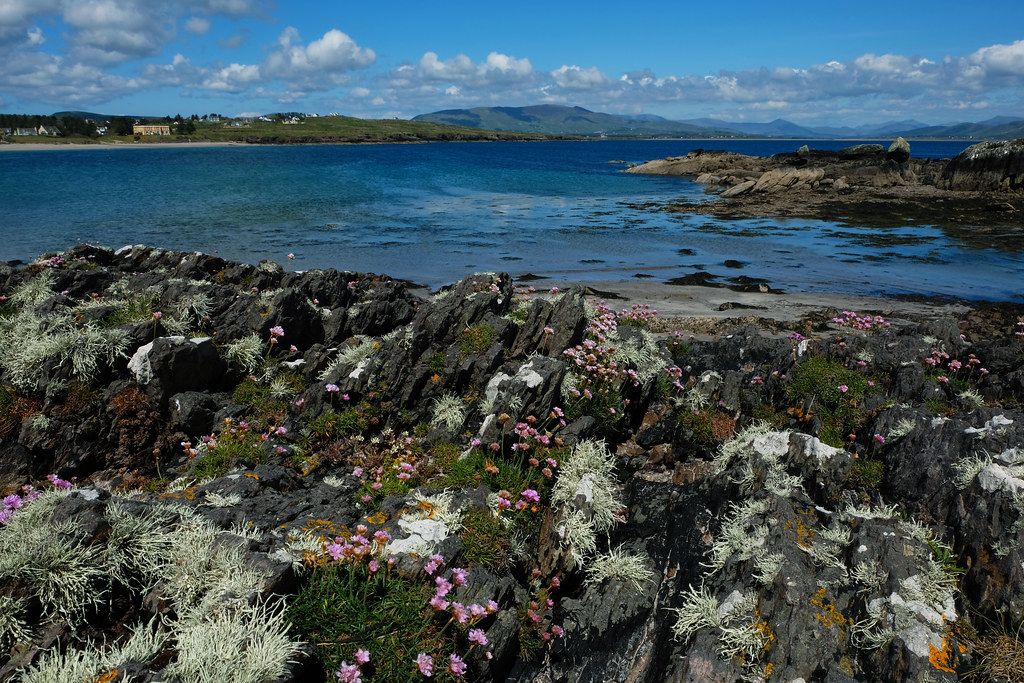 If you drive the Ring of Kerry and are in search of more ruins, take a short detour to Staigue Stone Fort, as well. It’s a ruined stone ringfort built in the late Iron Age. While we found it less picturesque than Ballinskelligs Castle, it’s much older. It whispers stories from thousands of years prior to our time, if you have the ears to hear them. 🙂

We finished our coastal drive from Galway to Clifden at Clifden Castle – which turned out to be one of our favorite stops. Imagine herds of grazing cattle and sheep, and a ruined manor house in the middle of the lush green farmlands overlooking Clifden Bay. 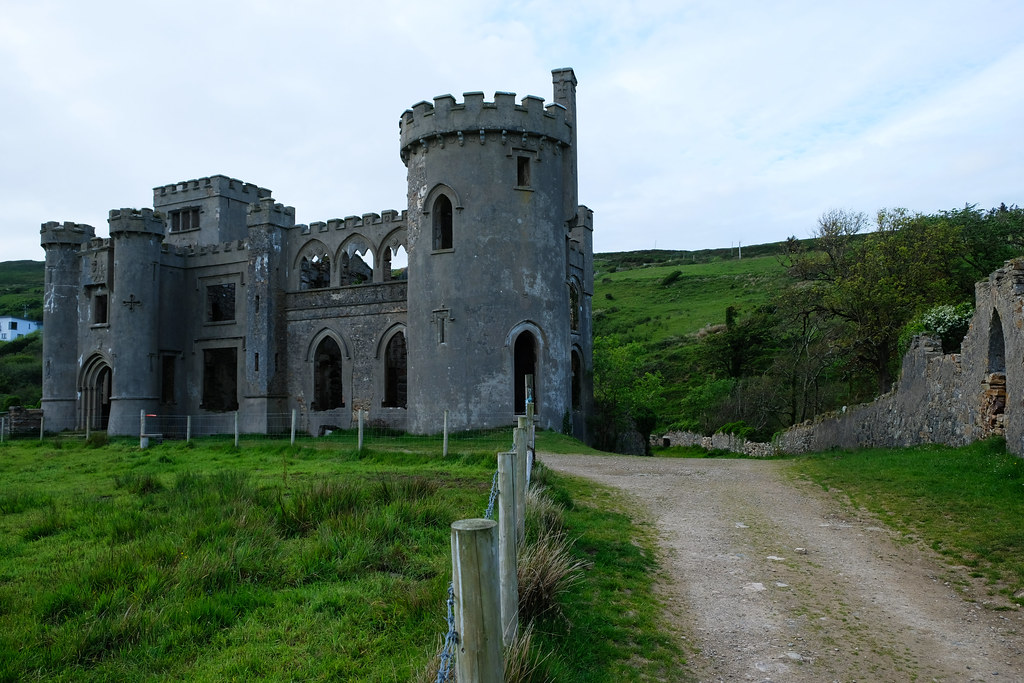 This manor house is known as Clifden Castle and was built in the 19th century in Neo-Gothic style. It became uninhabited after a while though and fell into disrepair. Surprisingly, it gives an even more mysterious, unique vibe to it. In our opinion, at least.

How to find it? It’s west of the town of Clifden. There’s a large medieval gateway that we walked through, then continued on the winding path in the farmlands that ended at the ruins. It’s about 20 minutes walk one-way. 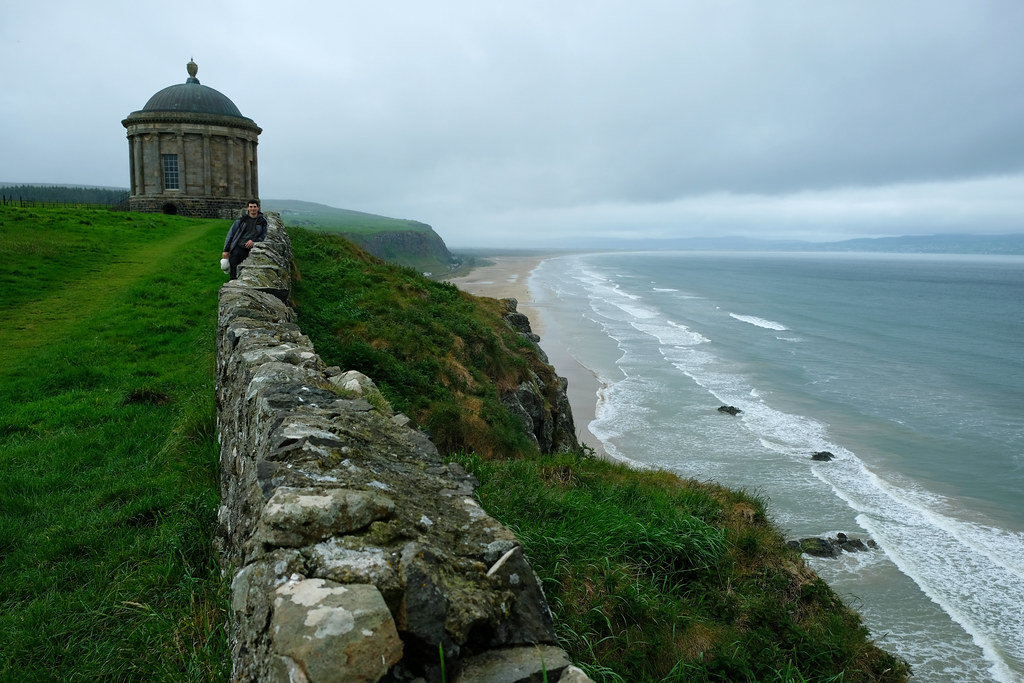 Another favorite ruin from another pretty scenic drive: from Northern Ireland’s Causeway Coast this time. Mussenden Temple is a small circular building originally built as a library. It towers above Downhill Beach and the Atlantic Ocean near the town of Castlerock. We guess it’s a library with the best coastal views ever. As time passes, coastal erosion brings it closer and closer to the edge though.

Downhill Castle, a ruined manor house is a short walk from the temple. Both are open to the public all year, however, Mussenden Temple is only open at certain times of the day. 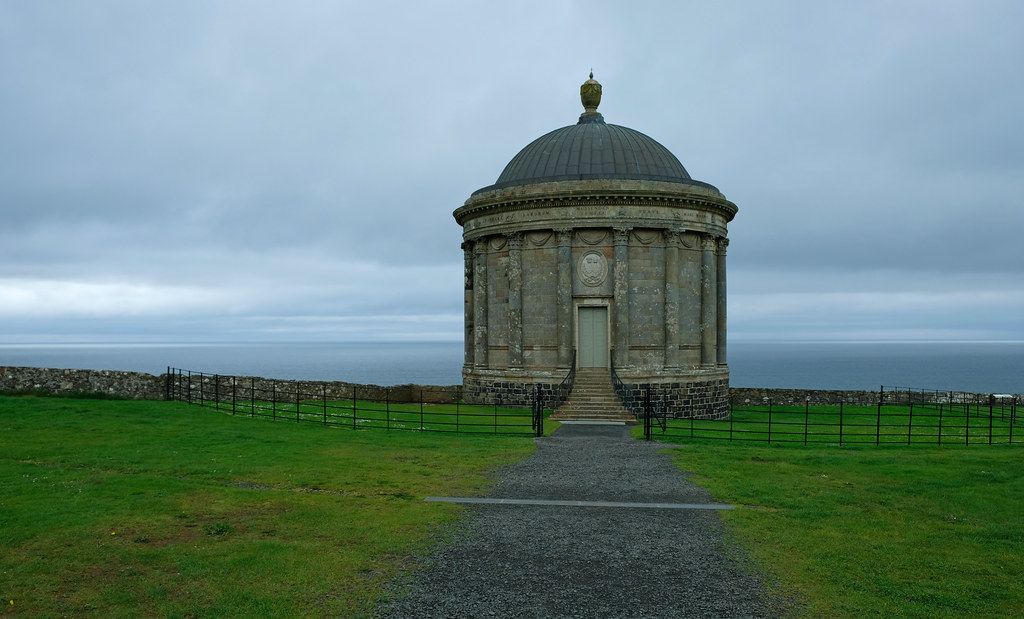 How to get there? We parked our car in Castlerock and walked to Mussenden Temple on winding coastal trails. It was half an hour walk one-way. Coastal views on the way and from the temple are wonderful! 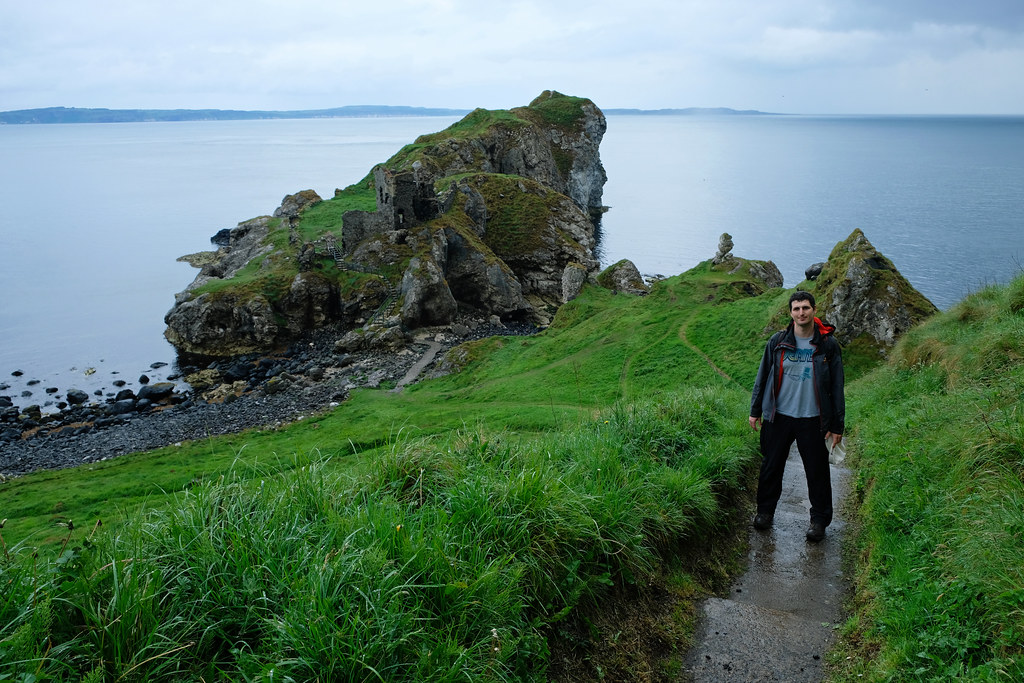 Our favorite ruined castle in Northern Ireland is also on the Causeway Coastal Route: Kinbane Castle. About halfway between Ballintoy and Ballycastle, this impressive ruin stands on a narrow headland made of white limestone.

A series of stairs led us down to the castle from the parking lot. Harsh wind and large waves surrounded us as we walked on the headland which is truly very narrow at places. It was also muddy and slippery when we visited. Not much remained of the castle, but it’s not just the ruins themselves that are special, rather the whole scene: the lush greenery, the limestone cliffs, the wild and magnificent Atlantic Ocean. Probably that’s the charm of Irish ruins, anyway: being located in such a typical, captivating Irish landscape. 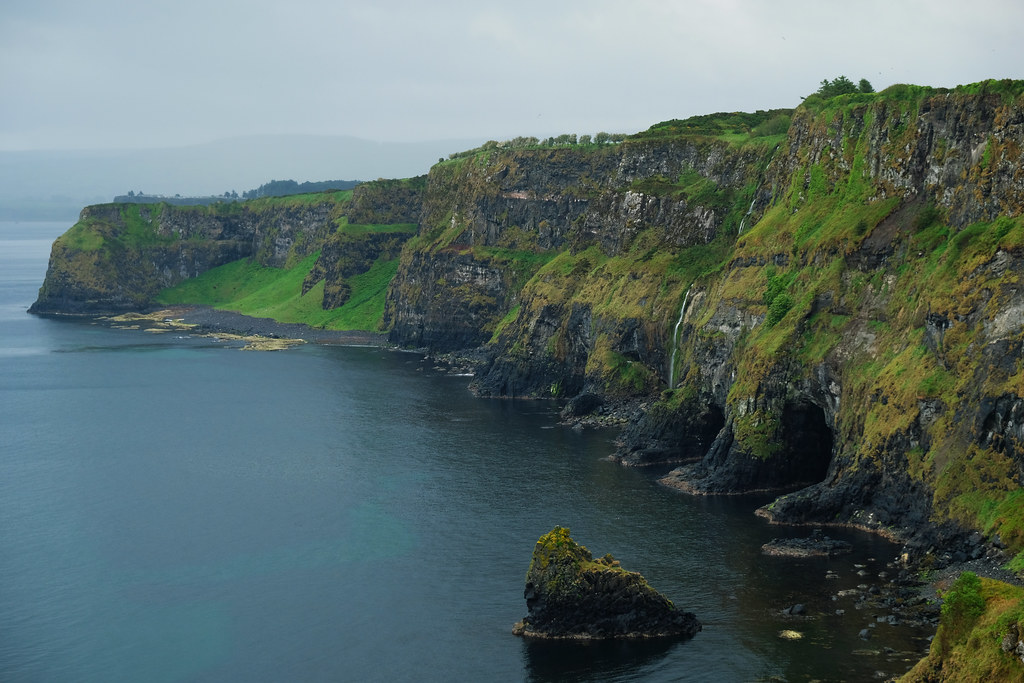 Do you like exploring ruins? Where are your favorites?