Does Everything Really Want To Kill You In Australia?

Does Everything Really Want To Kill You In Australia? “Why Australia? Everything wants to kill you there.” It was the reaction of most of our friends and colleagues when we told them about our upcoming travel plans. Partly, they were just pulling our legs. But there was seriousness in their voice, too. Because Australia is a faraway land full of unknown and dangerous things. Does everything really kill you there?

My most serious injury in Australia 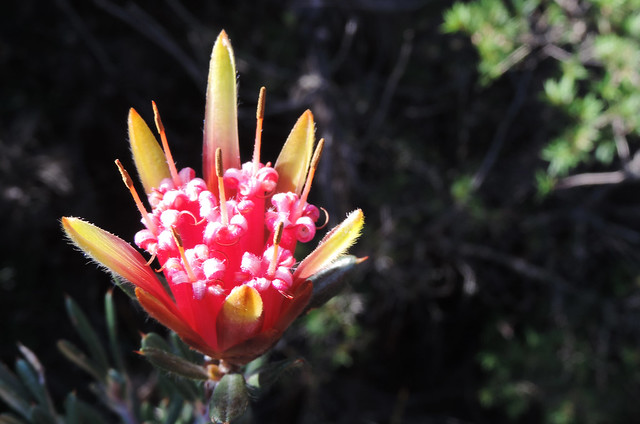 Let me start my answer with another question. What was the most serious injury I suffered from an animal during that 3 weeks we spent hiking, swimming, snorkeling and camping in Australia? A dog (who weighted about twice as much as me) jumped on me on the beach and scratched my legs so badly that I started bleeding. Typical. Its owner didn’t care much what the dog was doing. Typical. (No dogs were allowed on that beach, by the way. Typical again?)

“Well, a lot of things can kill you here. But they won’t.” – said an Aussie girl with whom we were talking and joking about all the dangerous animals in Australia. That could actually be the motto of this article.

What is the bloody truth? 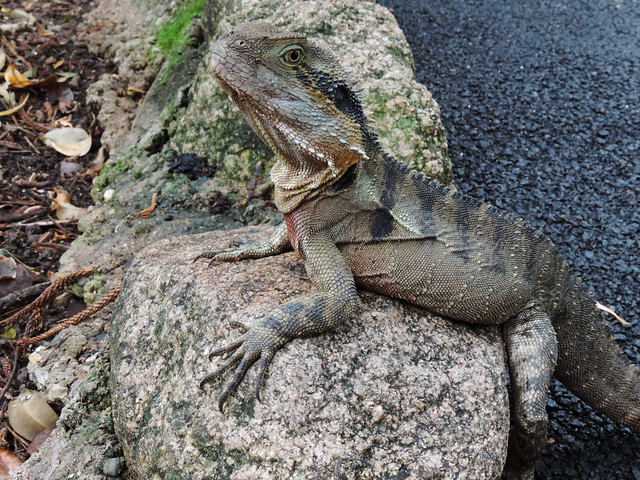 It’s true that some of the most poisonous and dangerous animals on this planet live in Australia. Venomous snakes. Spiders. Crocodiles. Sharks. Box jellyfish. Stonefish. Blue Ringed Octopus. Even a snail can contain enough venom to kill about 60 adults (it’s not an ordinary one though, it’s the Textile Cone Snail).

However, here’s another truth: more death happens due to car accidents and strong currents than due to all of these animals. If anyone gets injured in an attack, it will be big news. Because these attacks are so rare. Unlike car accidents that are not such exciting news because they happen too often. Or people caught by strong ocean currents and getting drowned. (If you feel some irony, you feel it right.) 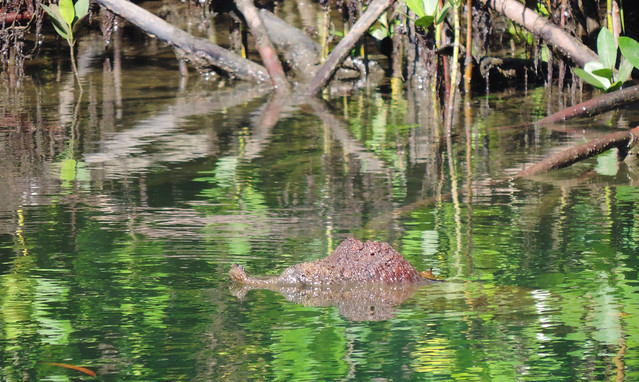 We are not telling you to ignore the threat that animals can represent. On the contrary, you should know about the animals that live in Australia, including the ones that can mean a threat to humans. But for us, this is part of respecting nature. It’s how we should act wherever we go on Earth. We should learn about the environment surrounding us.

Don’t touch plants or pick up anything. Keep to the path. Keep distance from wild animals – whether they can harm you or not. And never ever feed any wild animal. These are simple rules, and they are not just for your safety, but also for the sake of preserving those beautiful places you visit.

Animals get sick of human food. They can also became aggressive towards humans due to the feeding. People can destroy sensitive plants if they just walk where they like – especially in national parks with millions of visitors each year. Marked paths are there for a reason. We should always remember that we are only visitors in the wilderness while everyone else is at home, and we should act accordingly. Then we can experience magical things – and we can be safe, too. 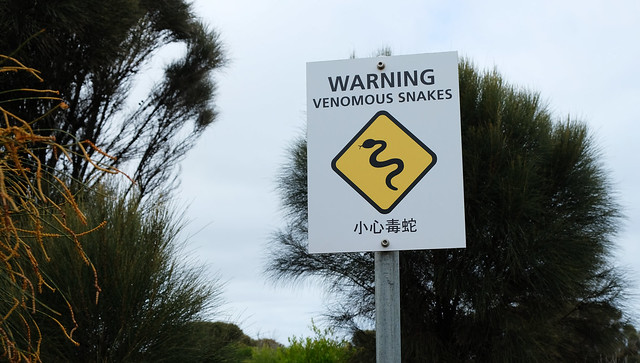 Information about potentially dangerous things or animals is well communicated in Australia. It feels almost too much sometimes. Like we don’t remember a single beach without warning signs. At least there’s a warning about potentially strong currents. But then, it’s the ocean and we have to admit they are right to warn people to respect it. Currents can be dangerous and people tend to underestimate them.

You’re not a pray 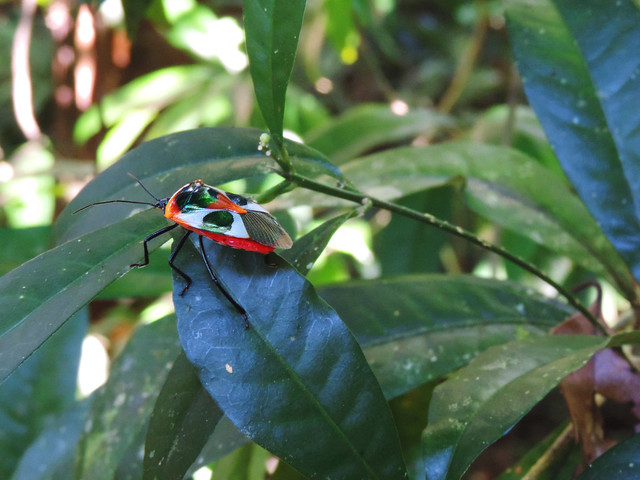 Another thing why we are not afraid of getting out in the wild and potentially encounter wild animals is: they don’t hunt humans. (It’s humans who hunt them.) They are not there waiting for you and planning to attack you. They are there because it’s their home.

That doesn’t mean they can never harm you. But usually they won’t. That, if you keep your distance and respect their personal space so that they don’t feel threatened. And if they are not fed by humans. Because that can make them associate humans with food and act aggressively towards humans. (Even cute chipmunks can bite you if they associate your hand with food. We are talking from experience.)

In general, most of the wild animals will avoid you unless you give them a reason not to. So just don’t. 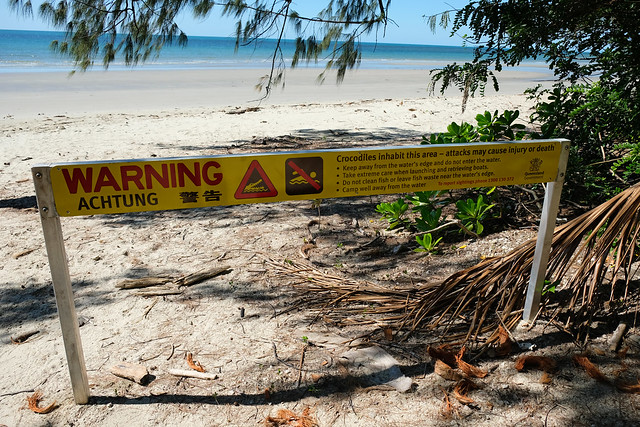 If all the above is not reassuring enough, here’s another fact to consider. Australia is big. Very big – almost the size of the United States. Not all the dangerous animals can be found everywhere on its territory, they inhabit certain areas. We did a road trip along Australia’s eastern coastline, from the Great Ocean Road to the Daintree Rainforest. There was no need to worry about crocodiles or marine stingers until about Gladstone/Rockhampton.

What about further north? Tropical North Queensland is home of saltwater (or estuarine) crocodiles, the largest reptiles on Earth. Don’t swim where there’s a warning sign about crocodiles.

Protecting yourself in stinger season

The warm waters of North Queensland are also home to dangerous marine stingers during the summer months (it applies to Northern and Western Australia, too, but we don’t have first-hand experience about them). They are somewhat harder to handle than crocodiles. It’s hard to see them in the first place. Also, they can be found anywhere in the Queensland waters during “stinger season”, including the Great Barrier Reef.

Stinger season lasts roughly from November to May, but it also depends on how north you are. The two most dangerous species are Box Jellyfish and Irukandji Jellyfish – the latter is only about 2 centimeters in diameter. 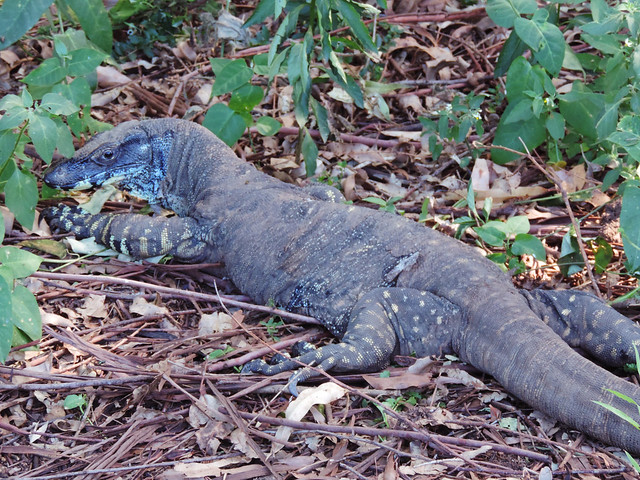 If you visit during stinger season – like we did in April -, you can do two things to reduce the risk of getting stinged: swimming in full-body lycra suits (aka “stinger suits”) and swimming inside stinger nets.

If you go on a tour (like snorkeling or diving at the Great Barrier Reef), tour companies usually provide those lycra suits during stinger season. We bought our own lycra suits in Sydney. They are effective not just against stingers but also against intense sunlight and UV rays.

While not every beach has stinger nets (there are just too many beaches, I guess), the most popular ones does. They are usually also patrolled and have containers of vinegar available for use if a sting occurs. For more information, you can check out this succinct and useful article about marine stingers. 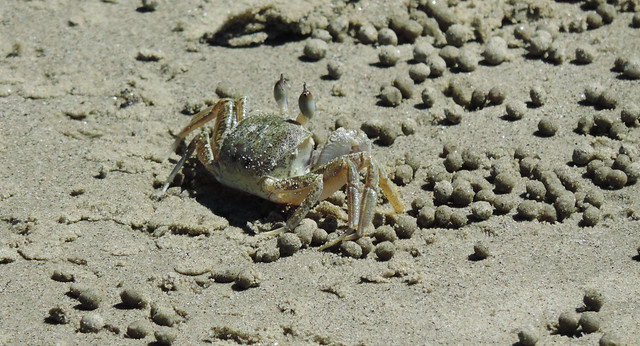 Still with us? Still eager to visit Australia? We totally agree. Our experience is that nature makes you feel small sometimes, no matter where you are. It’s so complex and powerful. So unpredictable. It’s also breathtaking. Just be respectful and responsible, and let it amaze you. It will.

Finally, remember that Australia is also home to some of the cutest creatures on the planet. So no worries, mate.

Have you ever been to Australia? Would you like to go?