5 Amazing Castles To Visit In Ireland

5 Amazing Castles To Visit In Ireland When you think of Ireland, you think of rolling green hills and stone castles (maybe Guinness, too). And you’re right to do so since Ireland is home to more than 30000 castles and castle ruins! But which ones should you visit if you only spend a week or two in the country?

Let’s take castle ruins aside now, because we’ll write another post about the most breathtaking ruins we’ve found in Ireland (and Northern Ireland). This time we’d like to show you that five amazing, unique castles that we liked the best on our two weeks road trip. While we know that it’s a question of taste which Irish castles you find the most attractive, we doubt that any of these would disappoint. They’re magnificent and nicely furnished. We visited all (but one) of them on a guided tour, and we really enjoyed the stories (and scandals) that were told about them. We enjoyed the humour of our Irish guides, as well. 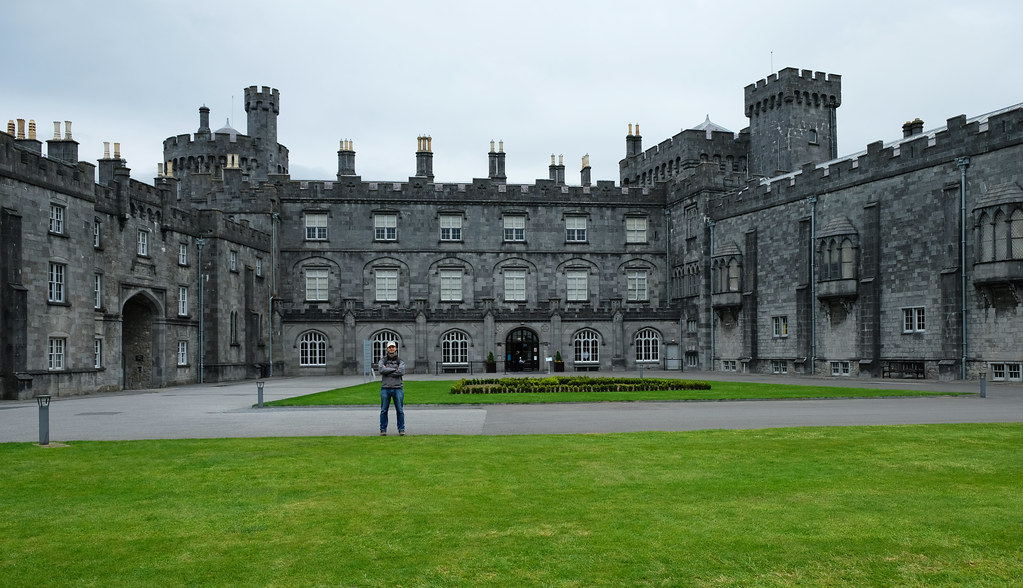 The mighty grey stone structure called Kilkenny Castle is the best thing to see in the medieval city of Kilkenny. It dates back to the 12th century. We could see the medieval foundation, then visit the nicely furnished rooms from the Victorian era on the first and second floor. We especially liked the library. Old libraries do have a unique charm, don’t they?

The gardens are free to visit. We enjoyed walking in the rose garden and exploring the large lush green park. Then we walked on Kilkenny’s colorful streets (very typical of all the Irish towns we’ve seen) and visited some majestic buildings – like St.Mary’s Cathedral, the Dominican Black Abbey or St. Canice’s Cathedral. 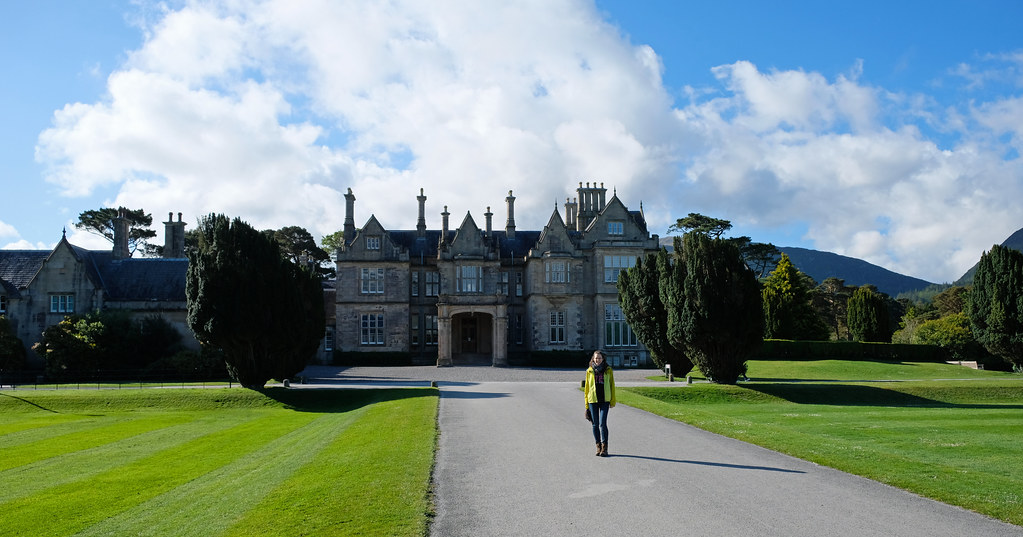 Muckross House is not a typical castle, still it’s probably our favorite one in Ireland. It’s a 19th century Victorian mansion, but it’s not just the furnished mansion that impressed. It has a large garden that was in bloom in May. It’s on the shore of Muckross Lake. It was the basis of present day Killarney National Park, and it perfectly blends into the fabulous landscape.

We enjoyed our guided tour through the two-storey mansion and its basement. Unlike the history of Eastern European castles that were taken away from their owners and operated as hospitals or storages in the World Wars then often fell into disrepair to only be renovated lately, Irish castles have a different typical history. When their owners went bankrupt or simply figured that living in a castle is way too uncomfortable and expensive, they often sold their property to a wealthy American. 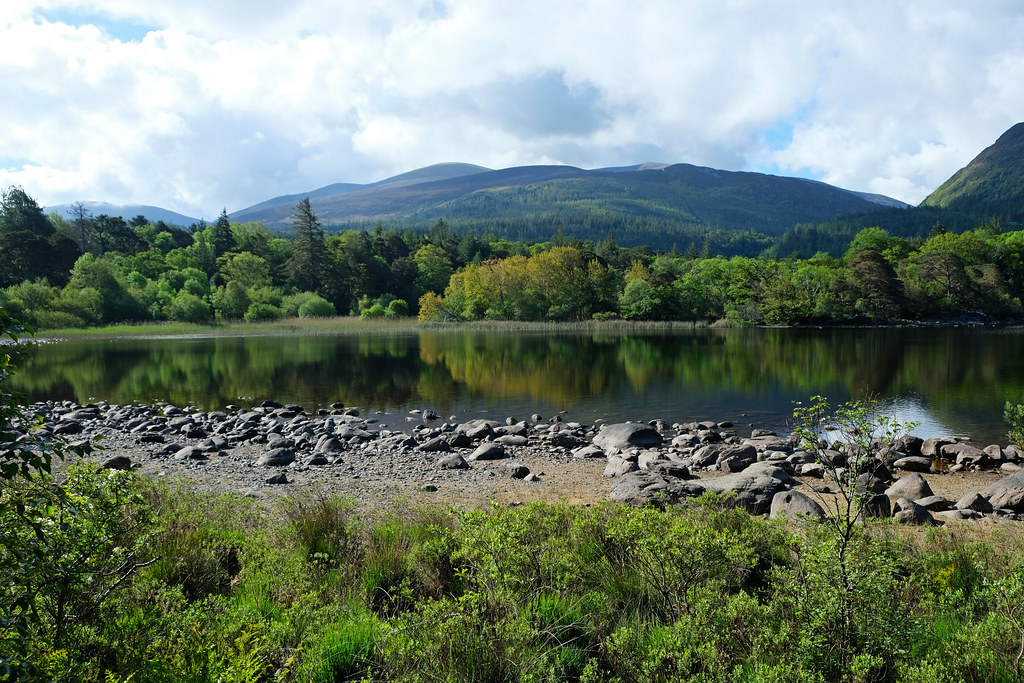 This happened to Muckross House, too, which was sold to a wealthy Californian mining magnate. Whose descendants later donated it to the Irish nation. We liked the place from the inside, too, and it was exciting to learn about the lives and traditions of the families who lived in Muckross House throughout the years.

If you visit Muckross House, don’t miss nearby Torc Waterfall. Also, walk on the shore of Lough Leane and take a look at Ross Castle. Well, and spend a day or two in Killarney National Park. 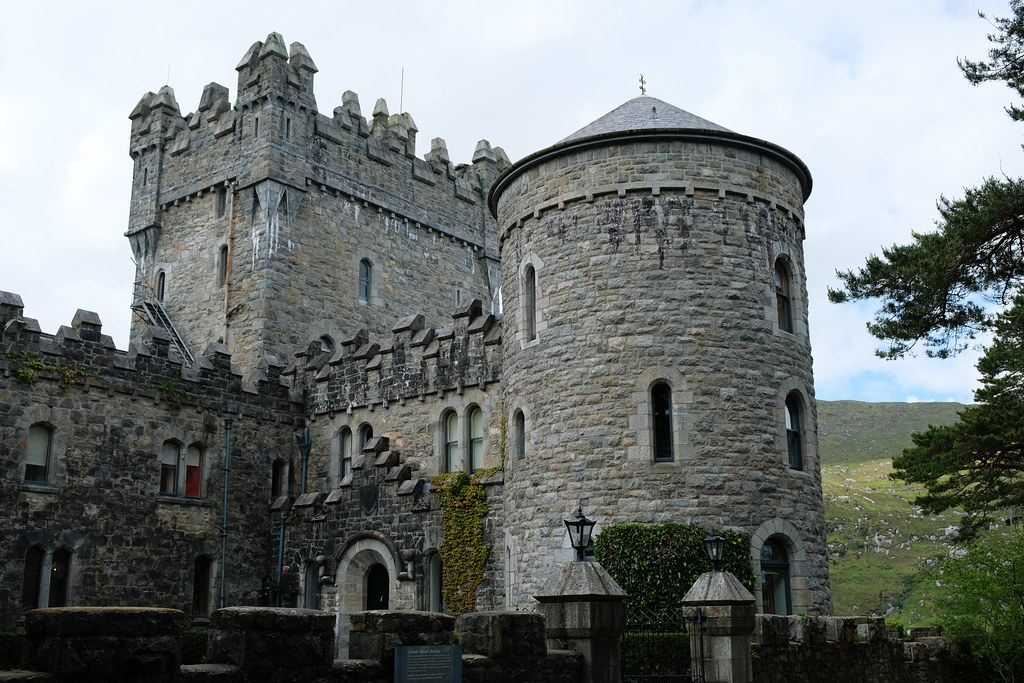 Glenveagh Castle is another one that’s to be seen with the national park that surrounds it. The stone castle stands in a windswept, hilly landscape on the shore of a large lake. We spent a whole day in Glenveagh National Park, and it included a guided tour in the castle, as well.

Glenveagh Castle was built by an Irish gentry, purchased by a Harvard University Professor, later by a Philadelphian. Finally, it was left to the Irish nation. Each owner has left their mark on the interior, and we enjoyed our tour through the furnished rooms. 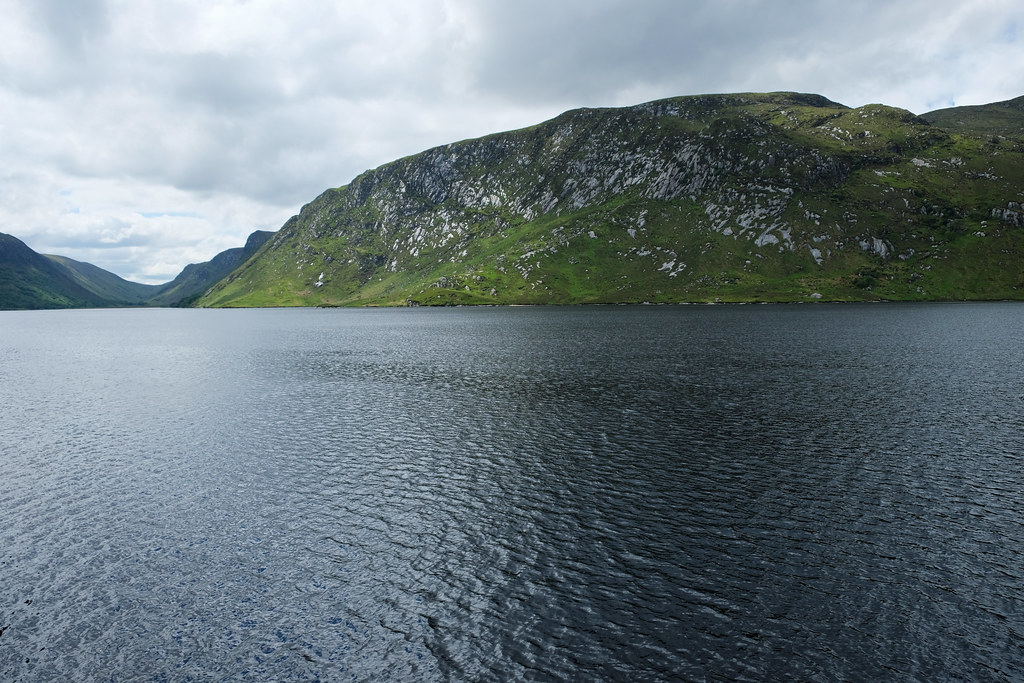 There’s a pretty walled garden adjoining the castle. Then we walked along the lakeshore and got to the waterfall in the valley behind the lake. We hiked the Viewpoint Trail, too, to see the landscape and the castle from above. The castle itself can be approached either on foot or by a park shuttle from the parking lot. It’s a 3.5 kilometres flat walk (about 40 minutes) on the lakeshore, and it’s very scenic all the way . 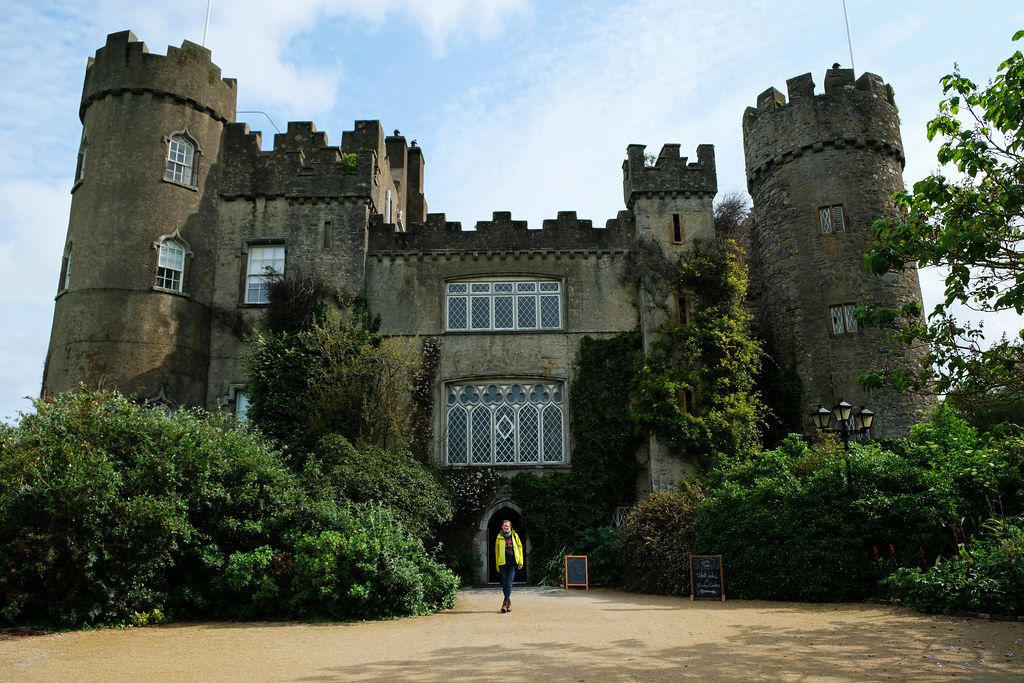 Another magnificent castle near Dublin – not purchased by any American, but given up by their heirs, because they couldn’t pay the inheritance tax. Malahide Castle was the home of the Talbot family since the medieval era for 800 years. Then it was sold to the Irish State. The interior of this massive grey stone castle also impressed us: woodworks, artworks, paintings, vintage Victorian toys. Our guide told a lot of exciting stories about the family life of the Talbots – and about some family ghosts. 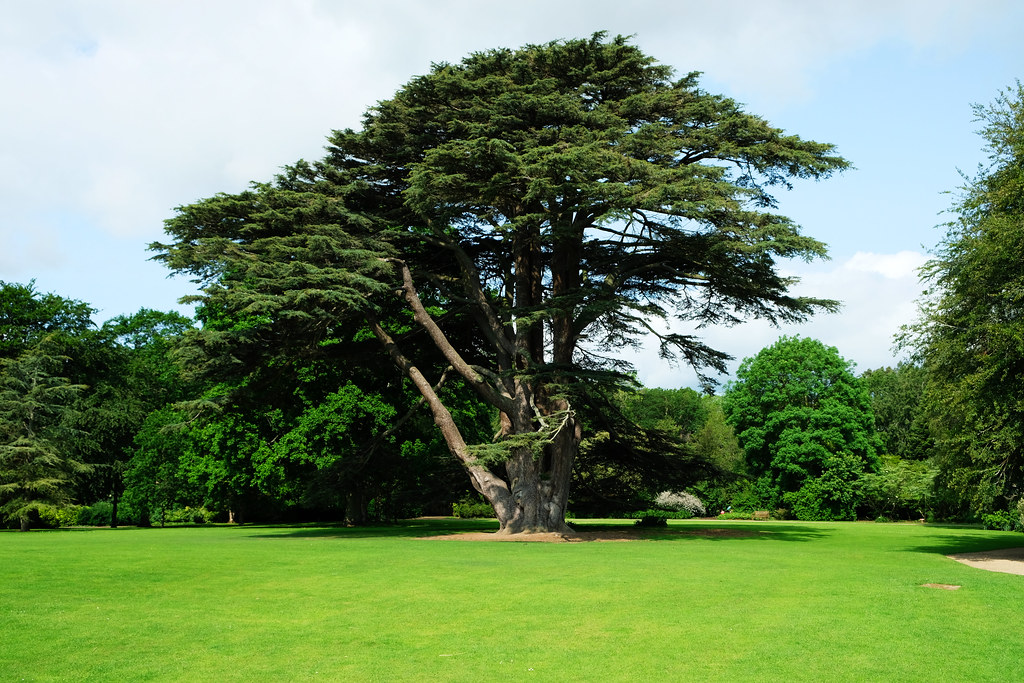 We liked walking in the large parkland, especially in the Walled Garden. There’s a butterfly house, too, and a Fairy Trail for kids. 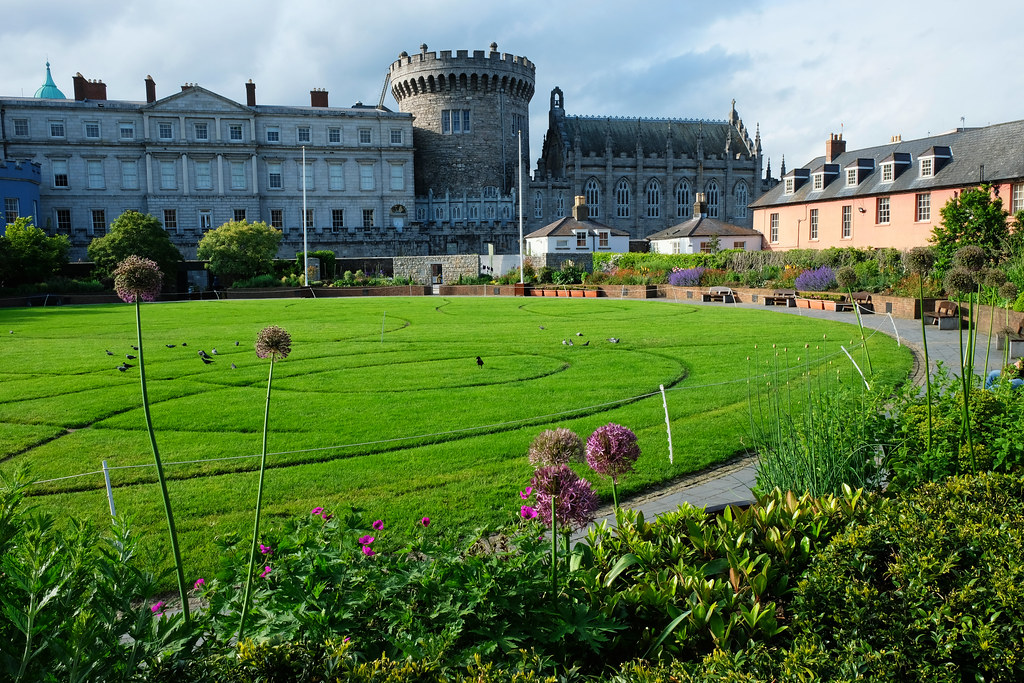 A straightforward choice – or not? Dublin Castle is one of the most important buildings in Ireland. Built in the 13th century, reconstructed and enhanced several times throughout its history, it’s a mixture of architecture styles today: medieval, Georgian and Neo-Gothic. Its history is just as exciting. From a defensive fortification it evolved into a majestic residence which was the seat of the British administration until 1922. Following Ireland’s independence, it was handed over to the new Irish government. Today it’s a government building and a museum.

We enjoyed our guided tour of the State Apartments, the medieval section and the picturesque Royal Chapel.

What about other castles? 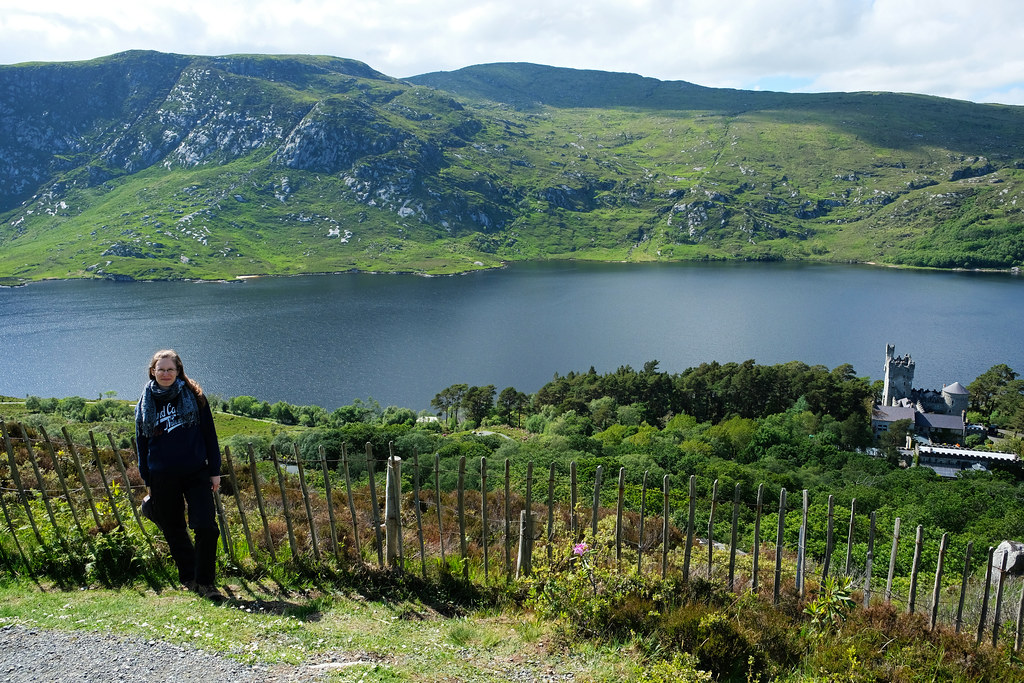 As we told you in the first place, there’s an insane number of castles in Ireland. We showed you our favorite ones but didn’t include some that you might have also heard of. Like Dún Guaire Castle that’s said to be the most photographed castle of all. While we have no doubt that nice pictures can be taken of this castle, especially at sunset, we didn’t find it very special – nor the shallow bay it towers above. But it’s most likely on your way, if you drive on the coast, so it’s worth a stop. However, we don’t think you need to visit it, because the views from the outside are the best.

The same stands for Dunluce Castle in Northern Ireland. Though we found that one very impressive from the outside. Luckily, it’s also on your way, if you drive the Causeway Coast.

Ashford Castle operates as a luxurious hotel nowadays, so no matter how famous, we decided to skip it. Afternoon tea can be booked in the castle’s Connaught Room though, if you’re curious but don’t want to spend a fortune to see it from the inside.

And even though we think we collected some stunning castles for you in this post, we’re sure we missed some others. Tell us about them!