It was not our first visit to Croatia, but the first one to Istria. We fell for it, and our favorite place there was undoubtedly Cape Kamenjak. “What? Have you been to Rovinj?” Yes, we have, and Rovinj is a close second favorite. But that’s the way we are, usually more impressed by unspoilt nature than anything humans can create. And Cape Kamenjak is an unspoilt treasure! Its beaches are among our favorites in Croatia.

What to see and do in Cape Kamenjak Nature Park? 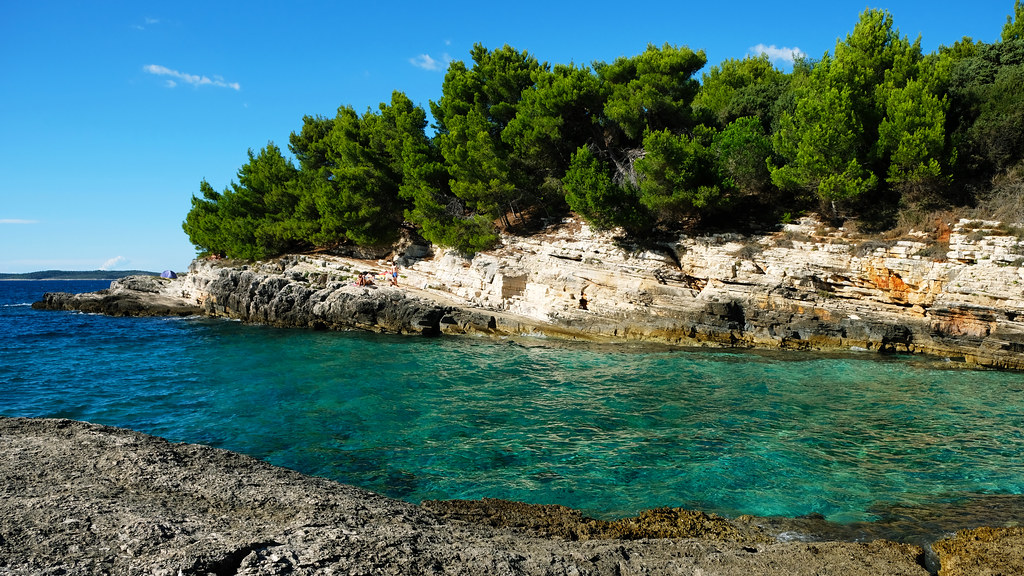 It’s the southernmost cape of Istria, and it’s been protected as Cape Kamenjak Nature Park since 1996. Its rugged coastline is home to 20+ beaches, and even more hidden coves that are available only from the sea. Not surprisingly, Cape Kamenjak is dominated by blue and green colors: the lush green pine trees, the turquoise bays, and also deeper blue shades where the water gets deeper (and it gets so quite quickly).

What can you do there? Swim, snorkel, kayak in the water, try some high water jumps, hike or bike on land. Look for Mediterranean monk seals! Take pictures of the wild coastline. Or just lie on one of those idyllic beaches. 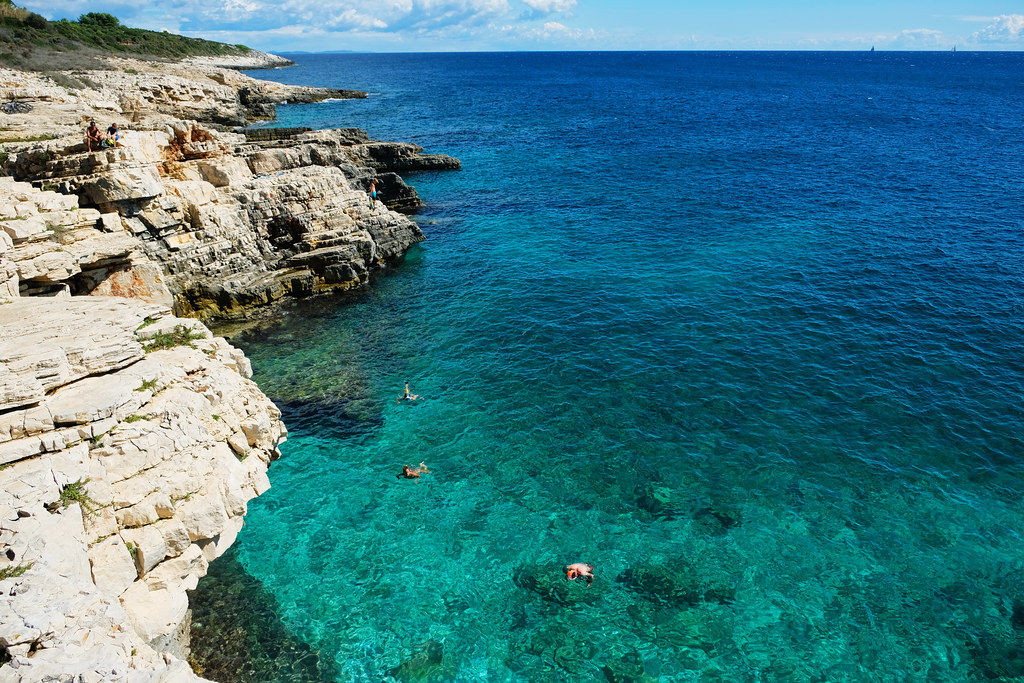 Okay, you might argue they’re not even real beaches, but we’re still sure you have to visit them if you’re on the search for a great snorkeling spot. In the neighboring coves of Mala and Velika Kolombarica, you need to jump into the water from the rocks. Mala Kolombarica offers a somewhat smoother entrance, but you better have your snorkeling shoes with you on the sharp rocks. Because that’s what you have here: rocks and immediately very deep water.

As we figured it’s not an ideal beach with a baby. Ironically, our little boy decided to start walking on his own right there and then, so we could realize that the pair of sandals we bought him a month ago were already too small. Uhm… yeah, we moved on to more family-friendly beaches, but the wild beauty of the Kolombarica coves amazed us nonetheless.

Not far from the Kolombarica coves, there’s a very cool Safari Bar. It’s suitable for couples longing for some intimacy, but also for friends and families (they have a playground among the trees!). 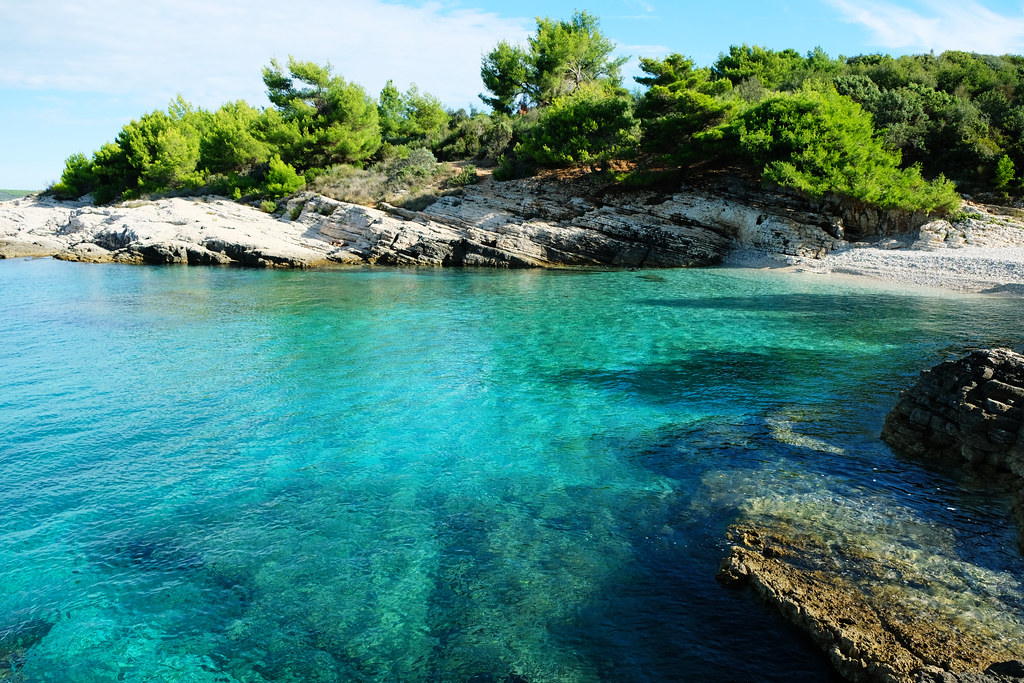 If you’re looking for family-friendly beaches at Cape Kamenjak, there’s plenty! We found that most beaches on the west side are similar, and east side bays are quite similar to each other, too. We preferred the west side, because rocks are more dramatic (and evidently steeper) there, making for a breathtaking scenery. 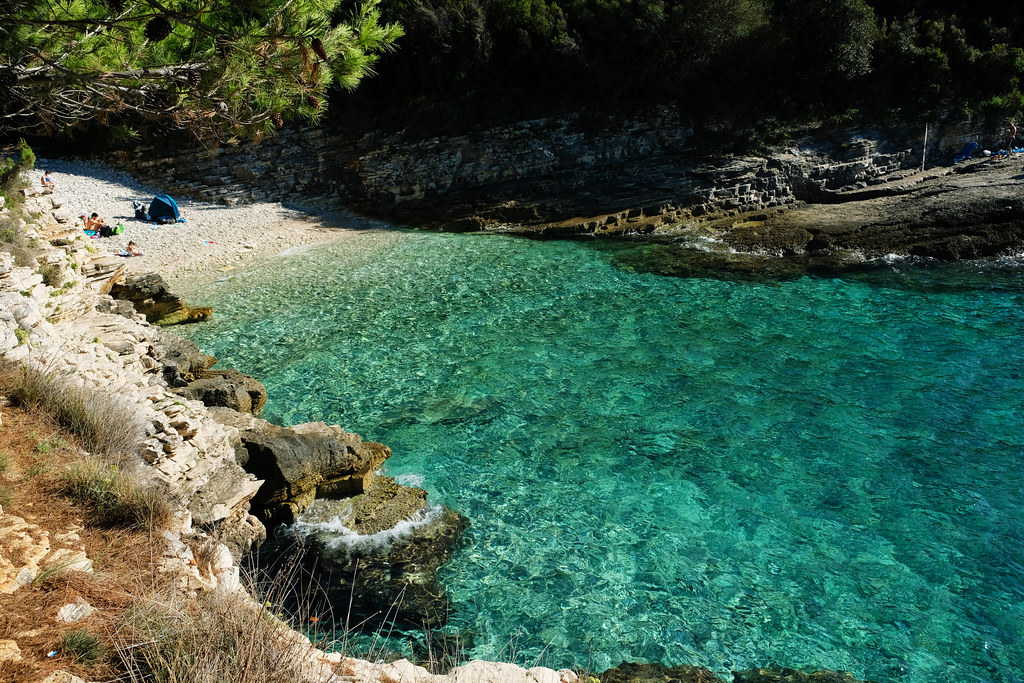 Our two favorite beaches are close and also very similar to each other: Plovanije Beach and Radovica Beach. They’re relatively small, peaceful, very picturesque pebbly bays surrounded by rocks and Mediterranean pine forests. The pebbly bays offer a smooth entrance – and an area for kids to play -, but you can also jump in from the rocks at the edge of the bay. Water gets deep quite soon, family-friendly here doesn’t involve shallow water in the pebbly bays.

More beaches on the west side 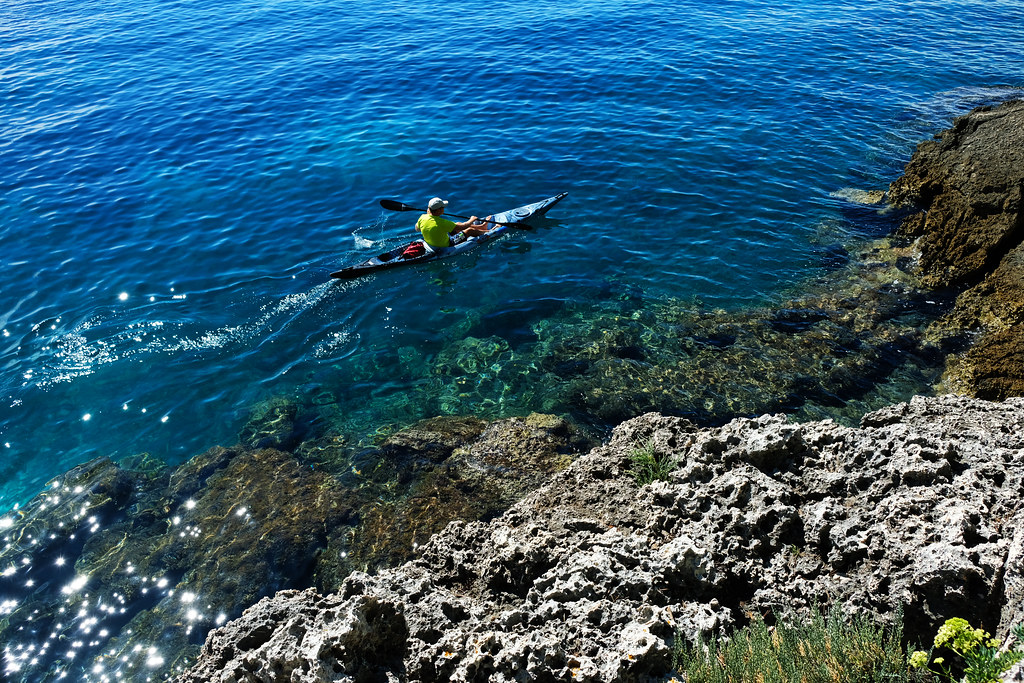 We hiked all along the coast on the west side of Cape Kamenjak, so we’ve seen all the beaches there. Pinižule and Njive beaches are somewhat similar to Plovanije and Radovica, only they were more busy. Both have a beach bar, as well.

We didn’t find Polje Beach that impressive. There’s a marine harbor in the same bay, probably that’s the reason. Toreta Beach is a scenic little rocky cove without any pebbly bay, like the Kolombarica coves. Kršine Beach is also more of a rocky cove than a beach, though it has a teeny-tiny pebbly entrance. But it’s the least protected beach at Cape Kamenjak, located right next to the Kolombarica coves. 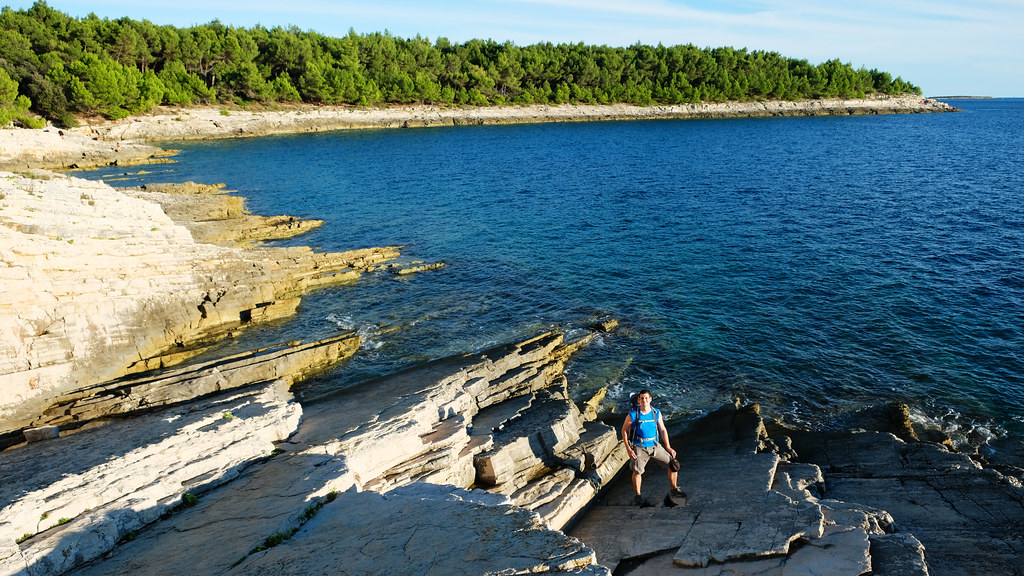 We’d also like to mention that it’s the west side beaches of Cape Kamenjak where we’ve seen jellyfish in the water: small, transparent and most probably harmless jellyfish. At least no one bothered about them. We’re no experts to tell whether there’s always jellyfish in the water there or whether these species can harm humans, but we’ve seen the same kind of jellyfish later at any other beaches that faced west in Istria. We incidentally touched them sometimes when swimming. It was a feeling like touching jelly (not at all surprising, hah), but that was all. They didn’t harm us. 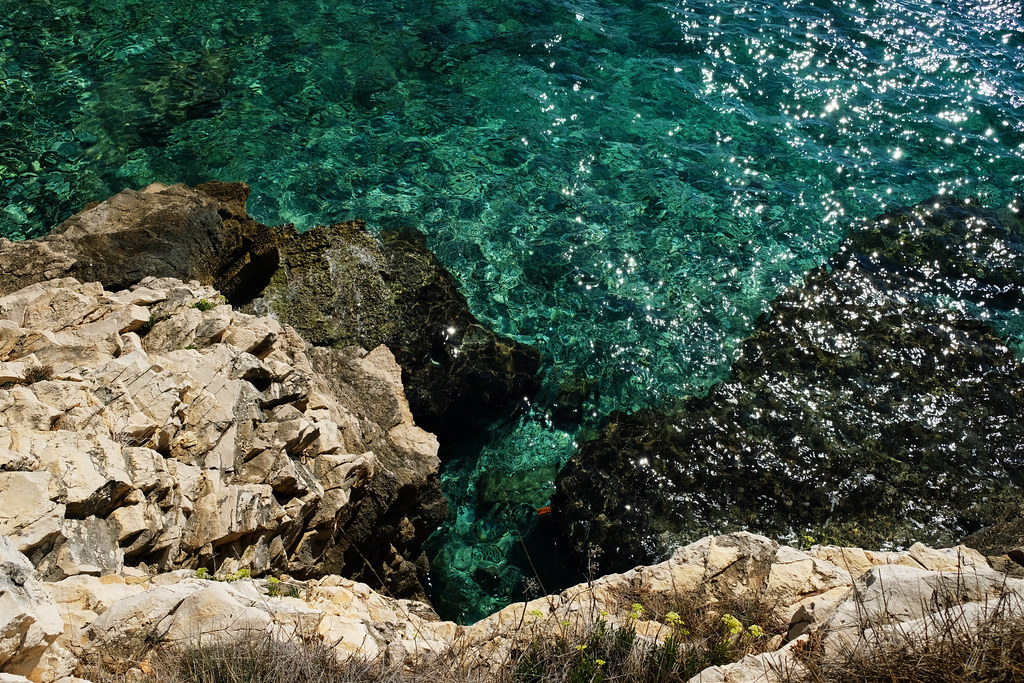 The most family-friendly beaches: eastern beaches

We didn’t swim at the east side beaches, only had a glimpse of some of them while we hiked on the coast. One thing is for sure though: it’s the east side that’s the more protected. Also, unlike the west side, rocks are flat there. The only sandy beach of Cape Kamenjak, Mali Portić Beach is also located on the east side.

Why did we not spend some time on these beaches then? Because we only had two days at Cape Kamenjak, and we ended up on the west side on both days – we fell in love with its dramatic coastal rocks and wonderful scenery! 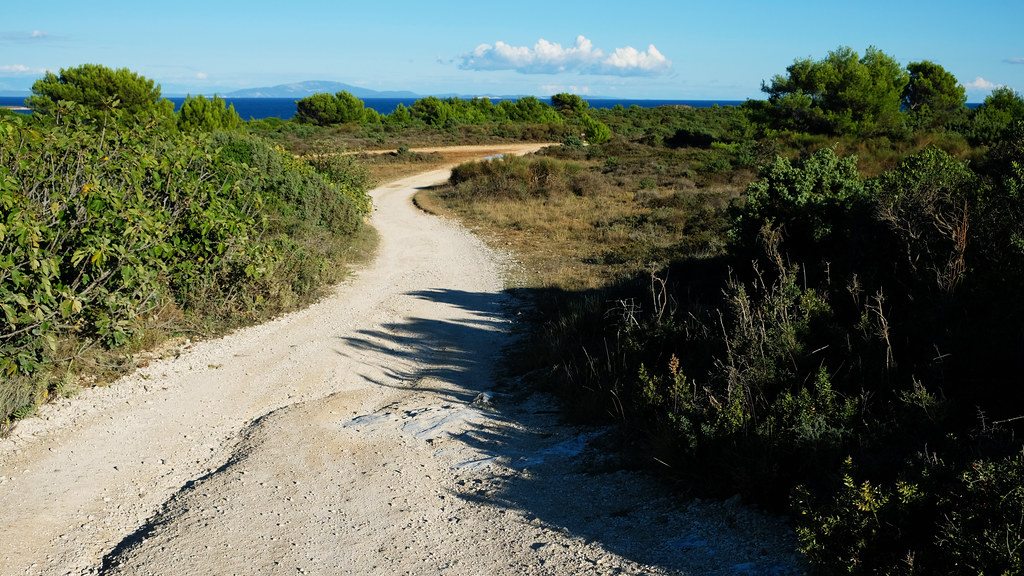 For most of the day, it was too hot not to enjoy the beaches when we visited in September. But late afternoons and evenings were perfect to finally do some hiking. We walked all along the coastal path on the west side. Crystal clear coves, views of lighthouse Porer and a picturesque coastline that I could hardly stop taking pictures of – that’s what we got. 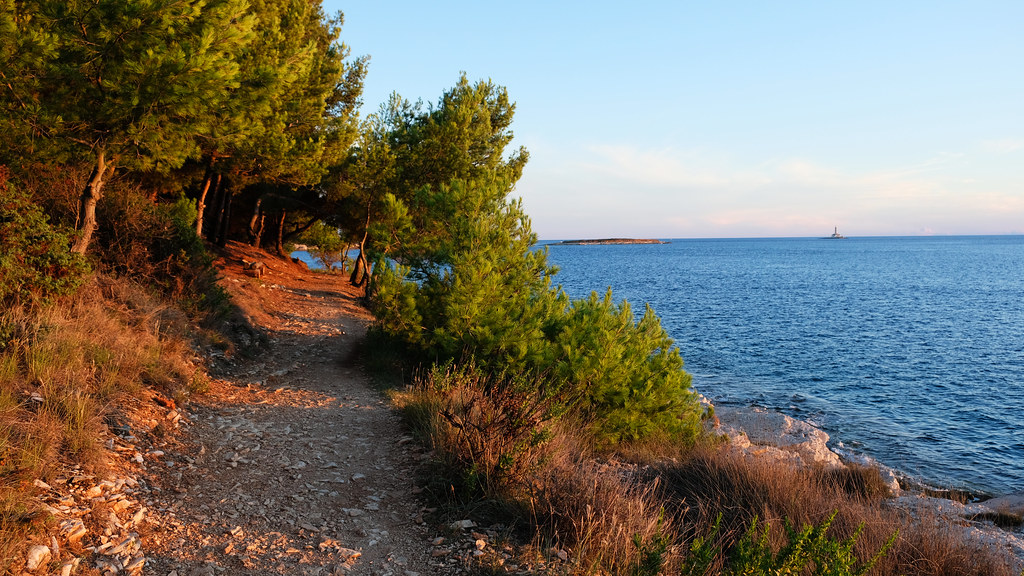 We also hiked from the Kolombarica coves to Cape Kamenjak Beach, and then to the highest point of the peninsula as we took a loop to get back to the Mala Kolombarica parking lot. Cape Kamenjak Beach and nearby Sv. Mikule Dražica cove is located on the southernmost tip of Cape Kamenjak. They’re accessible on foot only which makes them the most untouched and least busy area of the nature park. 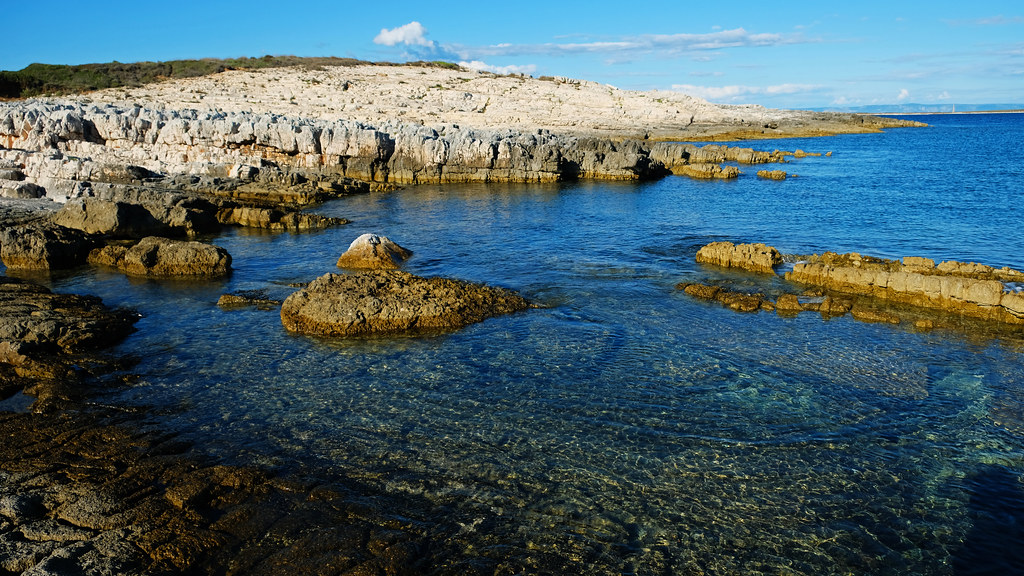 A fee is payable for each motor vehicle that enters the nature park. Walkers and cyclists can enter free of charge.

Most beaches have large, dirt parking lots where we easily found space to park. (Parking is, of course, free once you’re inside the nature park.) Keep in mind though that we visited in September, summer months, especially July and August can be much more crowded. Also, some but not all of these parking lots have portable toilets.

Does Cape Kamenjak sound like a place you’d love? Do you know similar unspoilt beauties on any coast in the world?