Originally established as a national monument by Theodore Roosevelt, Pinnacles became a national park is 2013. It’s one of the most underrated and least known parks in California. And we found it stunning and unique! Even in a state so rich in unique natural beauties as California. Whether you’re into hiking or rock climbing, spectacular pinnacles will amaze you on your way. The talus caves are home to several species of bats (they’re more afraid of you than you can ever be of them, do you believe us?), and they’re so much fun to climb through.

Where is Pinnacles National Park? 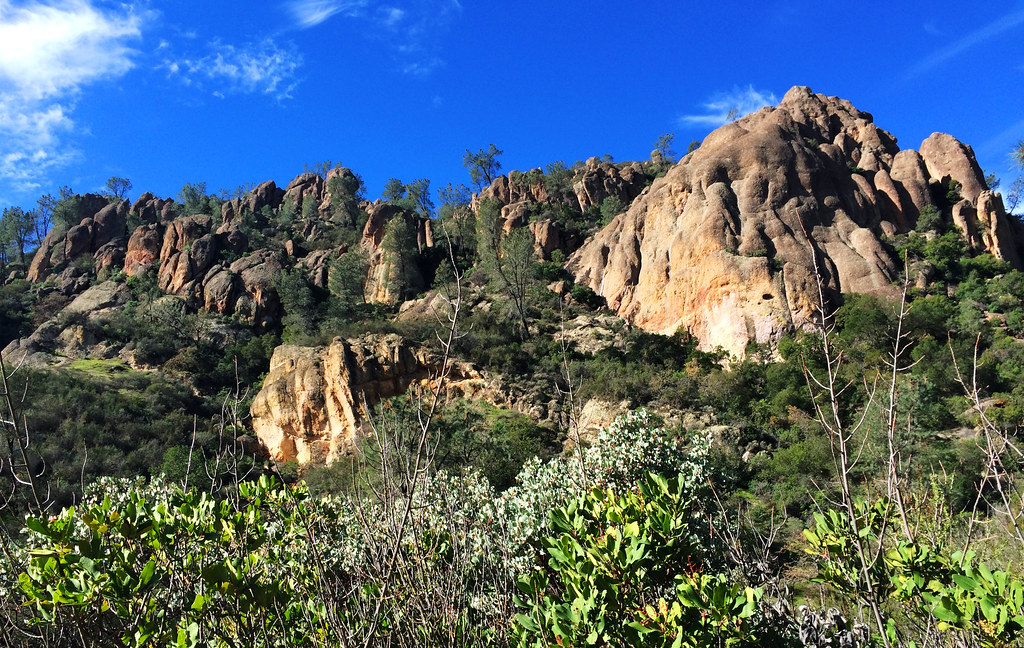 Pinnacles National Park is a real gem hidden in California’s continental area. Located east of the Salinas Valley in Central California, it’s only 2 hours drive from San Francisco. This makes it a great day trip from the Bay Area. Though it’s a bit further from LA and San Diego (5-6.5 hours drive), it still makes for a nice long weekend getaway from there, too.

There are two entrances to the park and there’s no road connection between them. They are connected through several trails though, and it’s not so hard to do a loop around the park if you have a full day. Anyway, it’s worth checking the trailheads you’re looking for to decide which entrance to use. 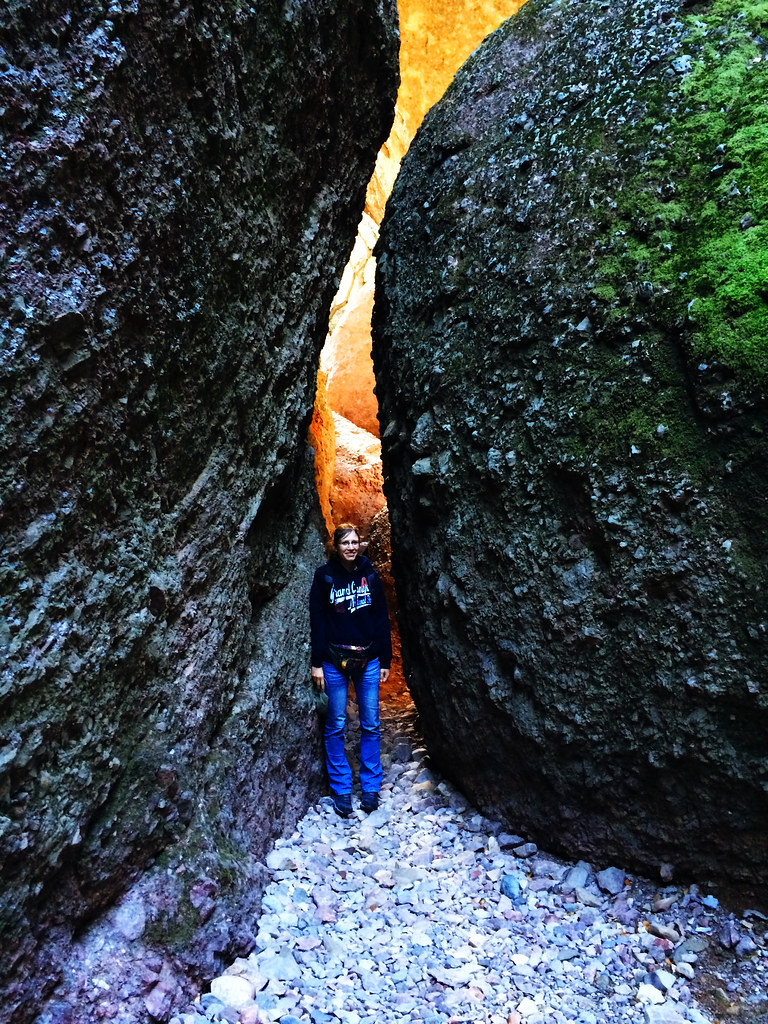 Our favorite trail is a loop through High Peaks Trail. It’s the most scenic region in the park with views of hundreds of pinnacles around you. Its highest peak is at 2720 feet (829 meters). 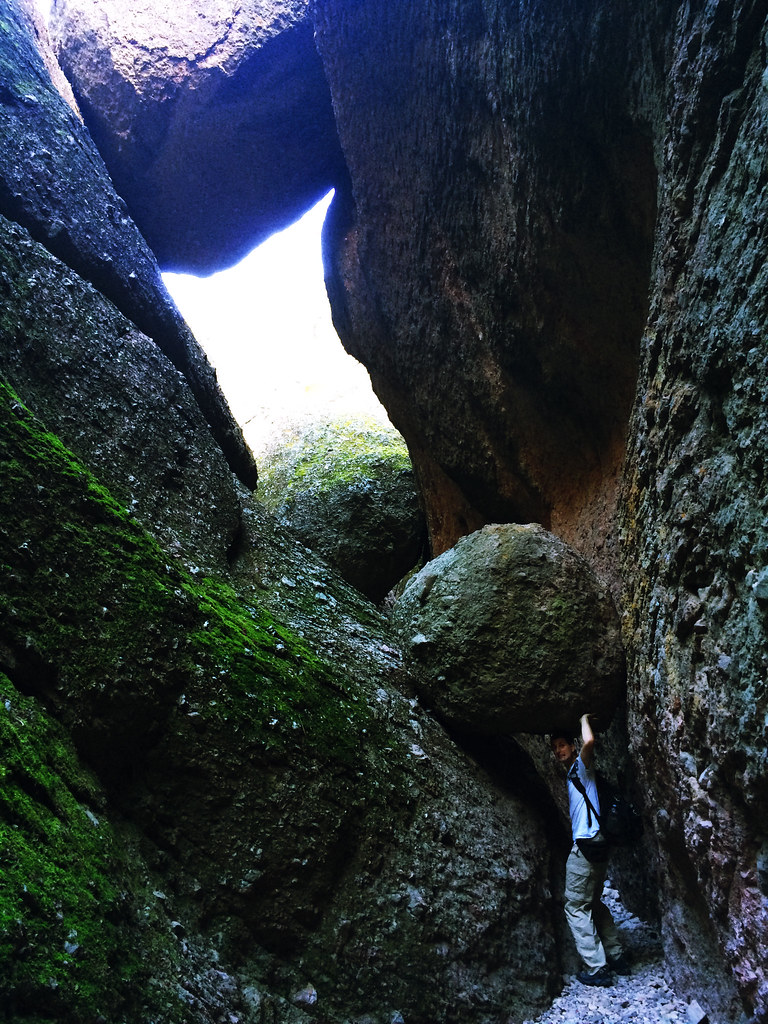 Some of the trails in the park led us through caves, and we found that’s an awesome addition. It’s not hard to get through the caves but a lot of fun! Just make sure you have flashlight because you will really need it. It’s dark in there.

And where to find those caves? Actually, whatever entrance you choose there’s a cave close by. Balconies Cave Trail is close to the west entrance. It’s open year-round, except after heavy rains in winter. The other one, Bear Gulch Cave Trail is close to the east entrance. It’s also open in most part of the year, except around mid-May to mid-July to protect the bats that live there. 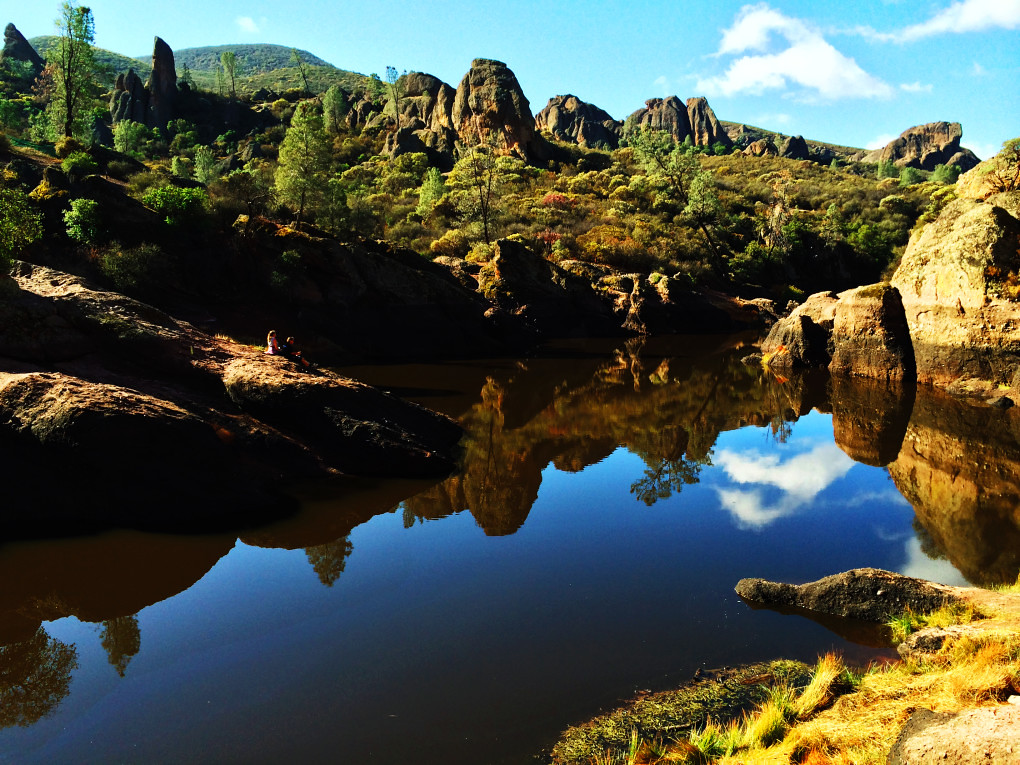 Bear Gulch Day Use Area is not only the starting point of several wonderful trails, it’s also a great spot for a picnic. We had nice views of some rock formations even from the parking lot. But taking the short trail to Bear Gulch Reservoir rewarded us with astonishing views of the pinnacles reflecting in the lake.

You can include or exclude the way through the cave. There are two paths towards Bear Gulch Reservoir, the choice is yours. We’ve seen several picnic spots with benches on the way, but the lake itself is the nicest place to chill out in our opinion. 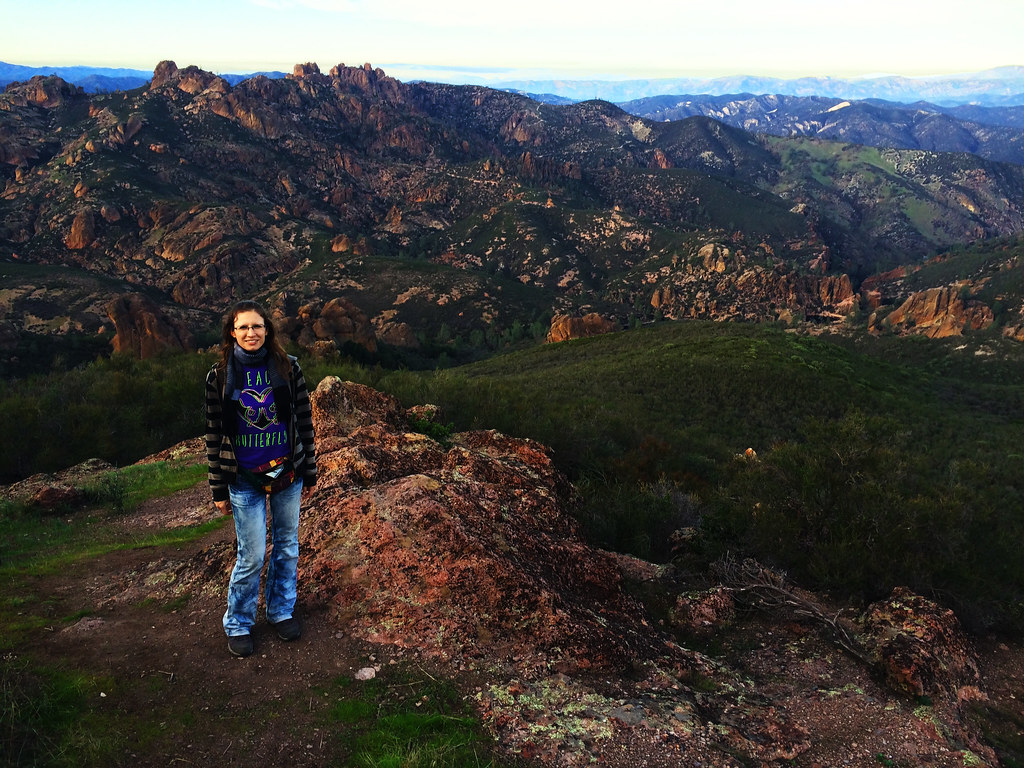 With its 3304 feet (1007 metres) height North Chalone Peak is the highest in the park. The trail to the summit starts from Bear Gulch Reservoir, and we got views of the pinnacles from a different angle as we climbed above them.

The 360 degrees panorama from the summit is also different. The pinnacles are even further in the distance, and we could see the surrounding hills and mountains. 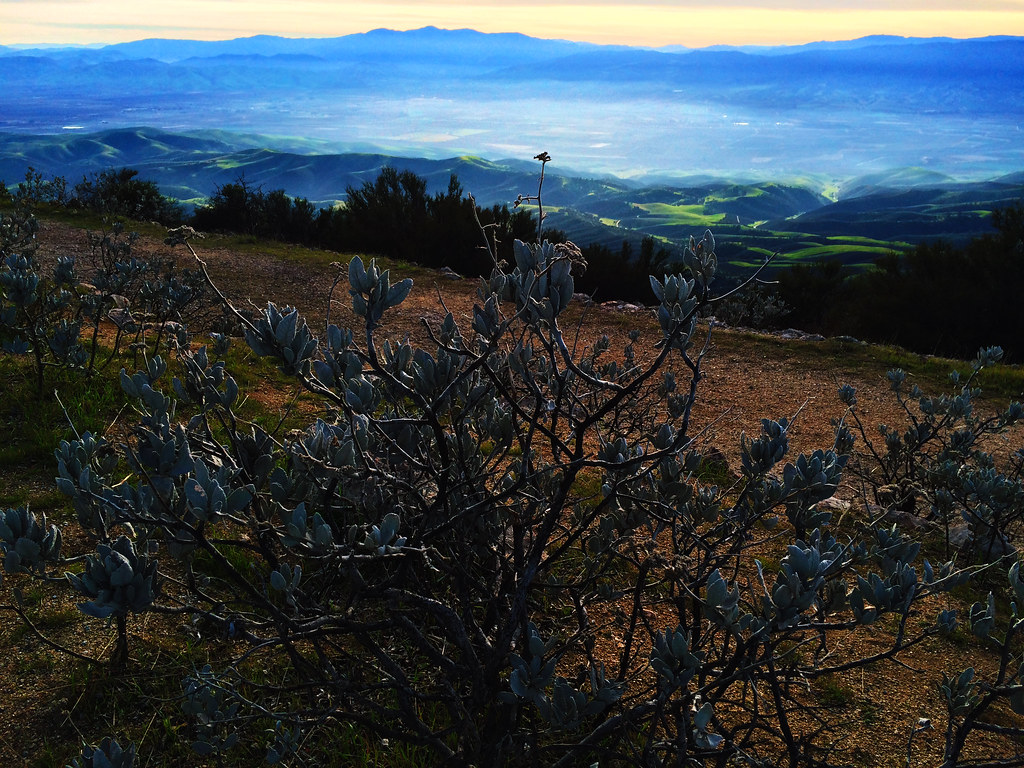 North Chalone Peak Trail is a steep one, but it’s not very long (about 3.5 miles one-way). In case you are wondering: it’s possible to do the High Peaks Trail and climb to North Chalone Peak on the same day. But it will be an exhausting and long day then – yeah, we talk from experience. 🙂 You’ll have more time to relax on the way if you do them on separate days. 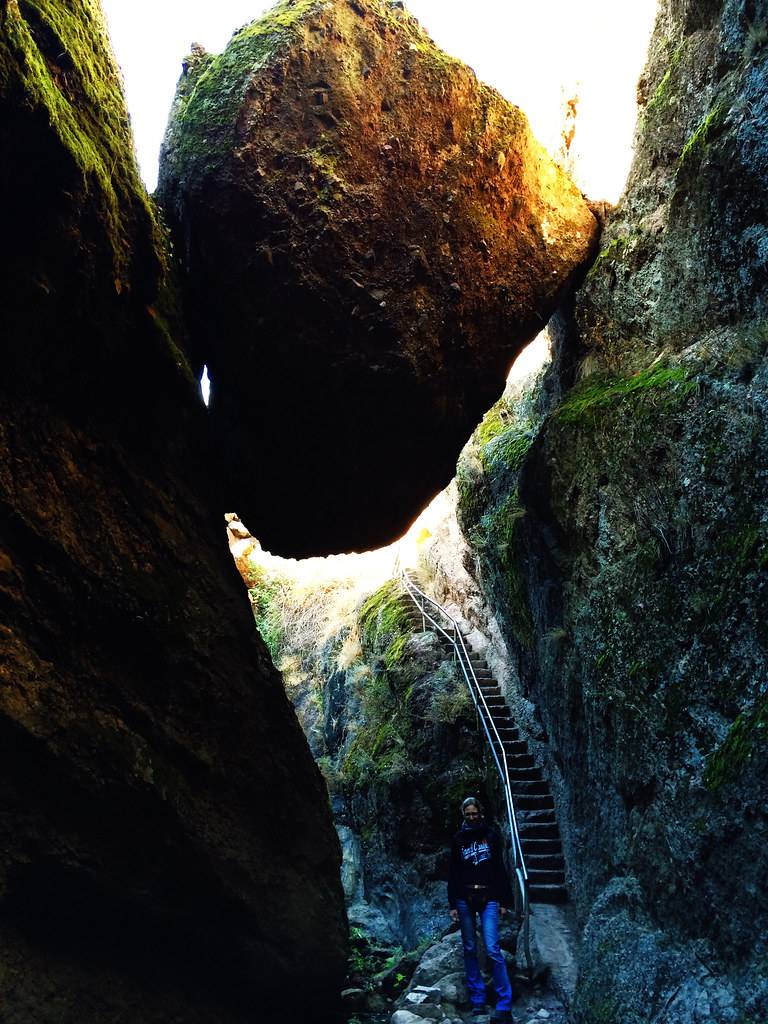 Summers are very hot in Central California’s continental region. Any other season could be great to visit. Hiking in autumn or winter could be quite pleasant, and spring is the season to hunt for pretty wildflowers.  Spring can start very early though, sometimes wildflowers bloom even in January or February. But most of them usually bloom between March and May. You can find the iconic (and very photogenic) vibrant orange California poppies mostly in creek beds.

We hiked in Pinnacles in autumn and winter, and we enjoyed the warm, sunny days. Winter can bring heavy rains though, so – as usual – it’s worth checking the National Park Service’s homepage about current conditions and alerts before you go. You can also find useful maps there.

Have you heard about Pinnacles? Would you include it in your California road trip?