California is our perfect place, probably it will always be. We spent a year there which seemed like a dream and it gave us courage to dream bigger. San Francisco is the city of wild dreams for us. The endless and restless Pacific Ocean is the symbol of our deep desire to never give up and touch the sky. Reaching the peaks of the Sierra Nevada and having those amazing views at our feet taught us that working hard to reach something is a damn good feeling and actually, even the way there could be pretty awesome!

I’m sure the world is full of inspiring places and people. But for us it was California that lit the fire. No matter where we are, part of our soul is still in California and it will always be. We are desperately in love with it and hopelessly biased about it, that’s for sure. It means the world to us – and well, we don’t only mean it emotionally. We really felt like finding the whole world there while we explored its famous and hidden beauties. So let me show you the place of our dreams. The place of several extremities. The place of outdoor lovers.

It has a breathtaking ocean coast! Whether you want to drive, hike, surf, observe wildlife or swim, you have it all.

Okay, let’s be honest here, the water is damn cold. But you can swim if you want and it could even be pleasant if you do so in Southern California. In Central and Northern California we usually walked on the long sandy beaches and listened to the waves and we could never get bored with it. Cold water or not, California has stunning beaches! 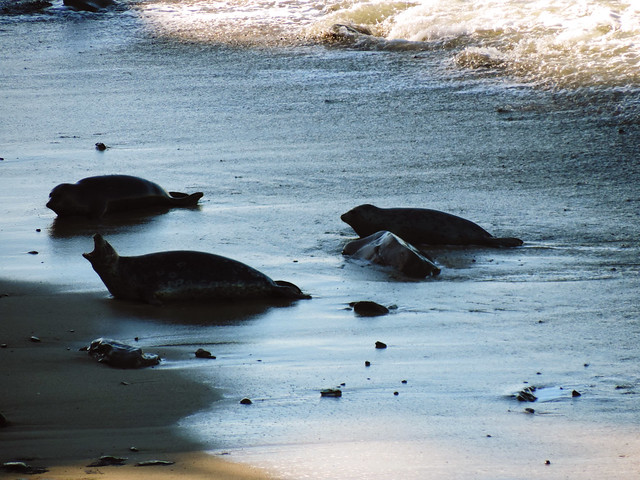 Moreover there’s a positive side of cold water at California coast: abundant wildlife. We’ve spotted seals and dolphins countless times while just walking on the beaches. With some luck we’ve even seen whales and orcas from the shore (binoculars are your best friend!).

Central California’s Monterey Bay National Marine Sanctuary is the largest US marine sanctuary with a unique and diverse marine ecosystem. And it’s the (almost) only home of the cutest marine creatures of all: sea otters! 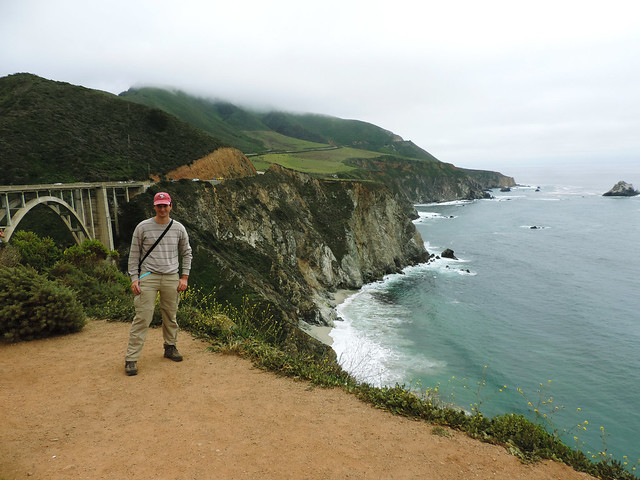 California State Route 1 goes along the Pacific coastline and rewards with fascinating ocean views. Big Sur is our favorite section of this long drive and if you are looking for easy hikes with great rewards, look no further.

17-Mile Drive through Central California’s Monterey Peninsula is a significantly shorter drive than Highway 1, but it’s equally impressive. In addition to the several wonderful vista points along the way, you also have a good chance to spot seals, dolphins or whales. 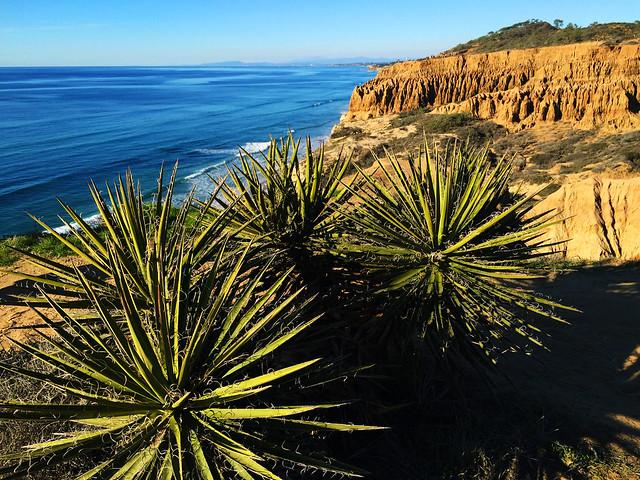 The hottest place on Earth 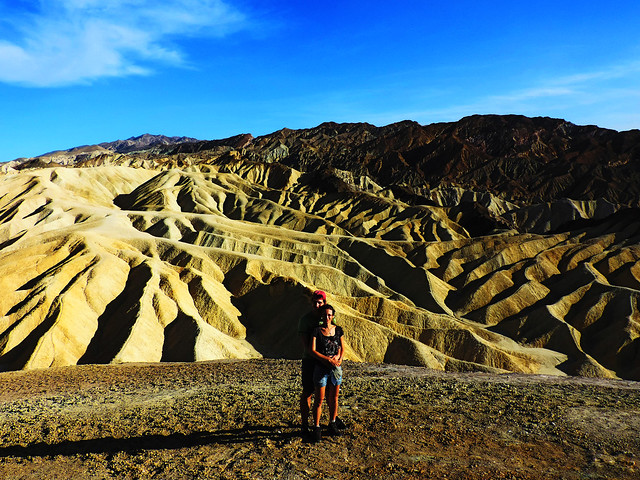 Okay, ocean and beautiful beaches are checked. Next is the deserts. Yes, there are deserts in California! Particularly in Southern California.

Actually, Death Valley National Park holds the record for the highest reliably reported air temperature in the world: 134 °F (56.7 °C). Badwater Basin’s salt flats are its lowest and hottest area with an elevation of 282 ft (86 m) below sea level. You can even walk around there a bit – we did. No, I won’t call it pleasant, but experiencing that dry and hot air and drinking a whole liter of water during a 15 minutes walk is a unique experience! 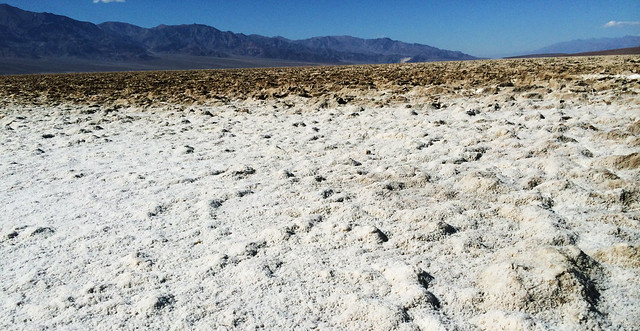 How could we have once thought that deserts are all the same and mostly boring? Death Valley, the first desert we’ve been to turned out to be pretty exciting and diverse: salt flats, sand dunes, mud volcanoes, wild rocks and Zabriskie Point (yes, that’s a category itself, a landscape from the moon). Route CA 190 through Death Valley was an unforgettable drive! 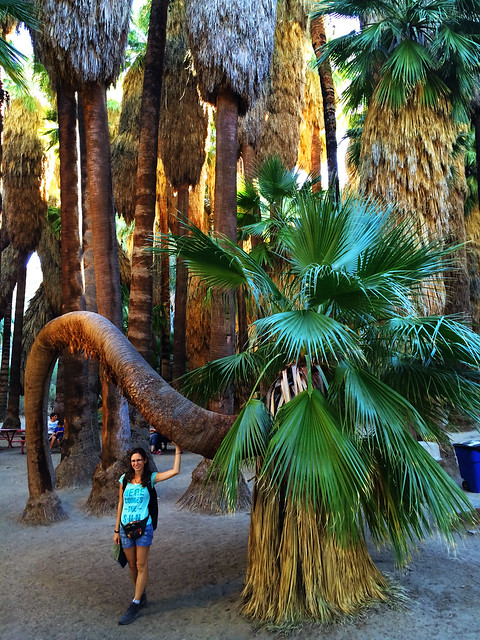 But we are not out of deserts yet, there’s Anza-Borrego Desert State Park and Joshua Tree National Park, just to mention the most famous ones. And do you know that there’s a time when even deserts are in bloom? Including Death Valley.

The palm canyons of Palm Springs show a completely different face of deserts. Imagine hiking in a palm oasis and having rest on the trunk of a palm tree. It was as cool as it sounds.

The tallest trees on Earth 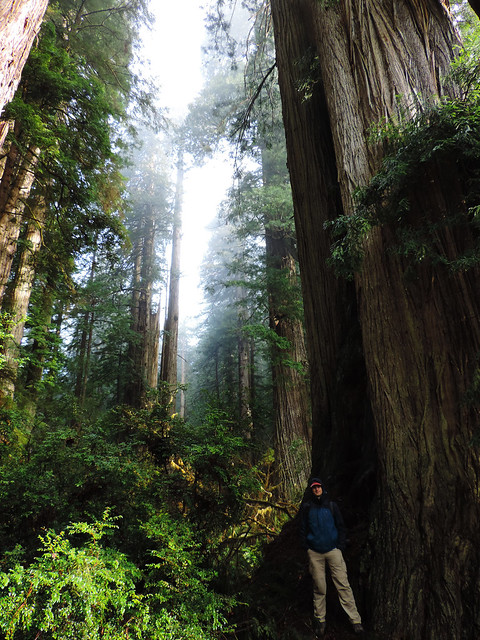 If the record for the highest temperature is not enough, California has more to impress. Like the tallest known living tree on Earth: Hyperion, a 379.3 ft (115.61 m) tall coast redwood.

Redwoods in general are the tallest trees on Earth, they can live thousands of years and California is the only home of this particular species. Hiking in the Redwood National and State Parks of Northern California made us feel that we are back in the prehistoric times. Humboldt Redwoods State Park’s 32-miles long scenic drive, Avenue Of The Giants is a road where any car seems to be tiny. 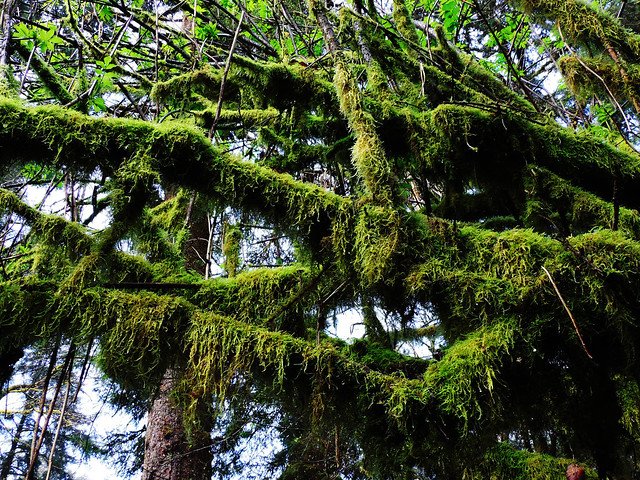 But the magic of the redwoods is not only their size, it’s also their silence and peace that you can’t compare to anything. Hiking in the redwoods is a therapy of its own kind.

Even Central California has some smaller old growth redwood forests like the redwood state parks of Big Basin, Portola or Muir Woods.

The largest trees on Earth 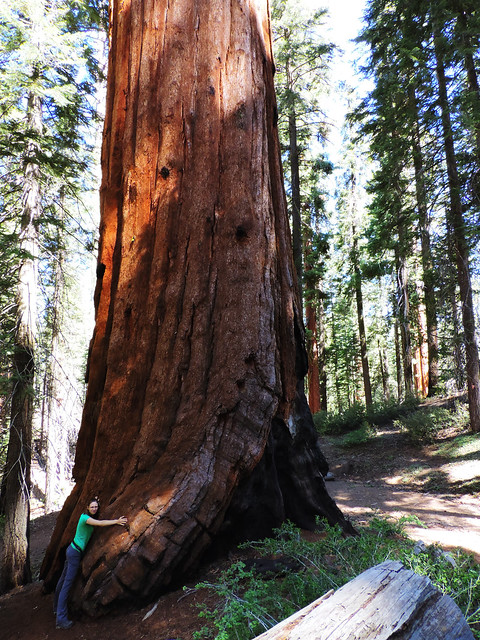 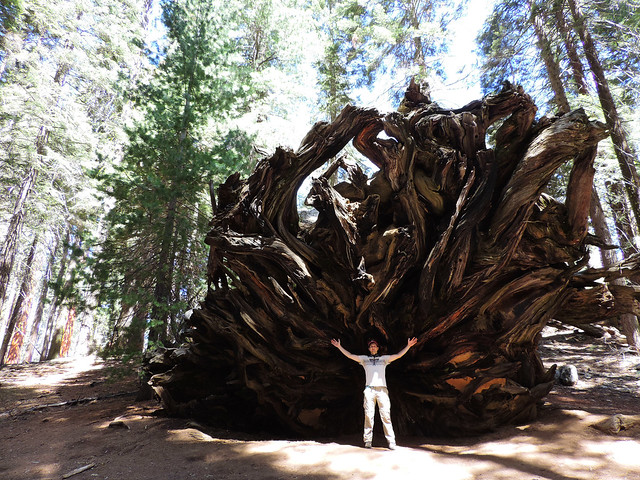 A lot of easy walks and hikes give access to them, we even drove through one the fallen trees and we’ve also seen a simple room furnished inside the trunk of a fallen one.

Mountain paradise of the Sierra Nevada 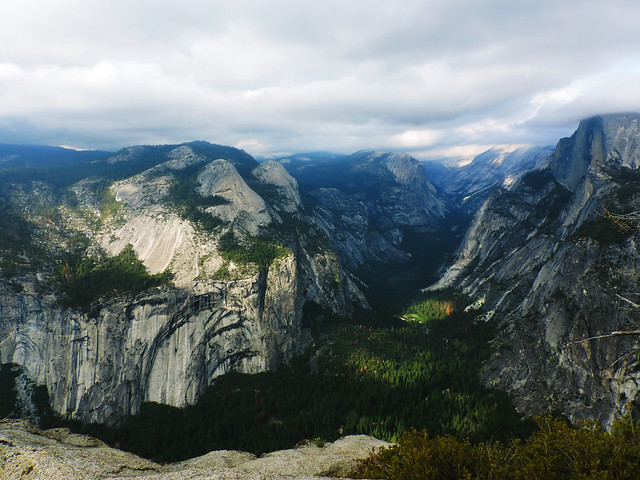 About 80 miles from Death Valley’s Badwater Basin, the lowest point in North America, Mount Whitney stands. With an elevation of 14505 feet (4421 m) it’s the highest point in the contiguous United States and definitely the highest peak of the Sierra Nevada. Another California record.

Sierra Nevada, our mountain paradise! Magnificent skyline, Lake Tahoe and countless other crystal clear alpine lakes and creeks, breathtaking waterfalls, giant trees, spectacular white granite peaks, three national parks, several wilderness areas… We spent as many of our weekends there as we could during the hiking season and the list of our must-do hikes only got longer. 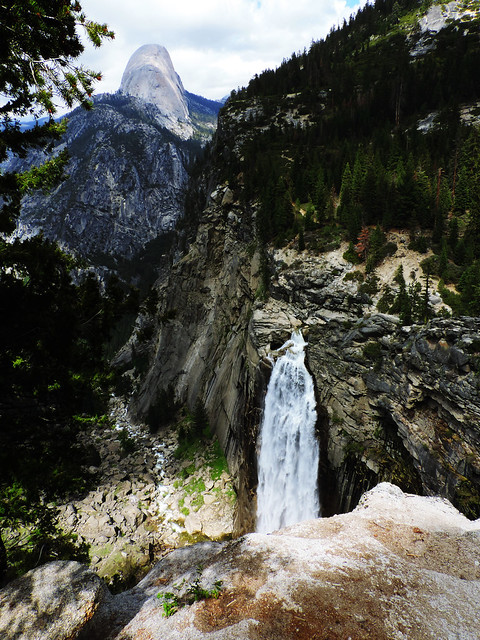 One of the three stunning national parks in the Sierra Nevada is Yosemite. If you ask where to find the most beautiful and largest waterfalls in the US, Yosemite National Park is the answer. Yosemite Valley is home of 8 impressive waterfalls!

A lot of them can be seen from the valley, some requires a short walk or a longer hike. The greatest one is Yosemite Falls which is the 5th tallest waterfall in the world! (2425 feet / 739 m) 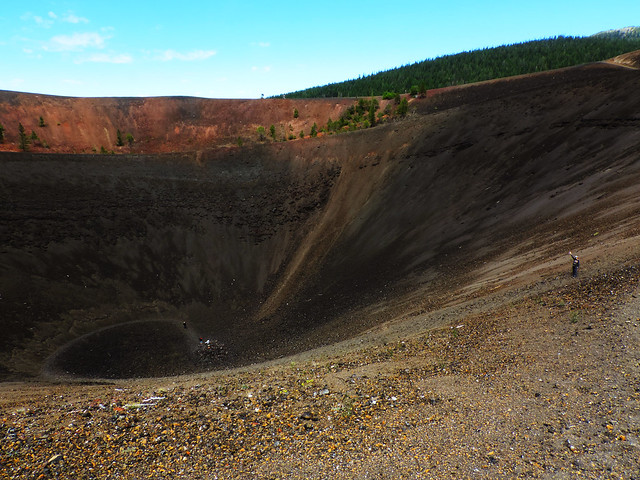 All four types of volcanoes found in the entire world are represented in California’s Lassen Volcanic National Park. And countless hot springs, steaming fumaroles and boiling mud pots, even a boiling lake. Moreover some other lakes which are not boiling but look marvellous. 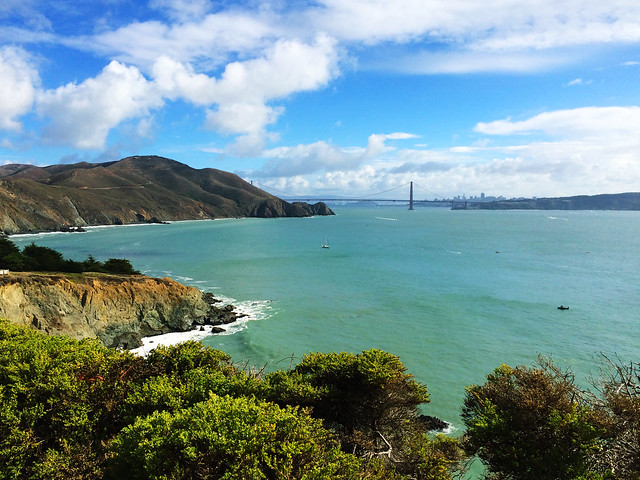 We are seriously addicted to hiking and nature so I just keep ranting about all the natural beauties in Cali like there’s nothing else there (like its diverse and astounding nature wouldn’t be enough…). But there is. Some pretty awesome cities, actually!

San Francisco is one of our favorite cities in the world. It’s hard to tell exactly why because the reason is San Francisco itself, the city as a whole. Its atmosphere, its typical streets, its parks and beaches and ocean views, its vibrant Chinatown, cable cars, Golden Gate… everything. 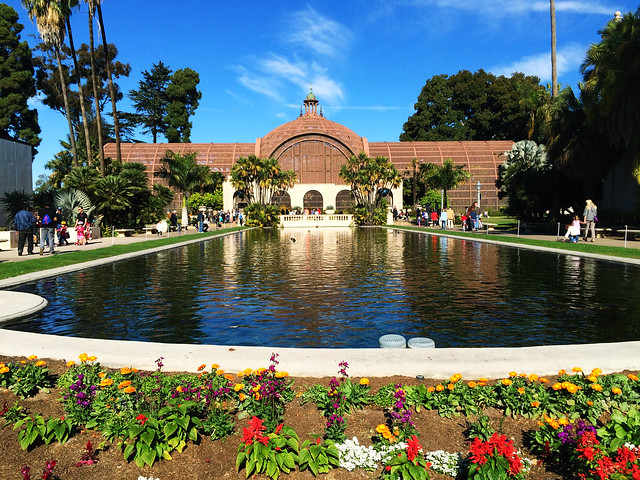 The other city we’ve fallen in love with is San Diego. We didn’t have much expectations as we didn’t know much about it, but its special cultural heritage and atmosphere amazed us. It feels like a mixture of modern American, Native American, Spanish and Mexican. San Diego’s Balboa Park is our favorite urban park in the world. Not to mention that it has the best swimming beaches in Cali. 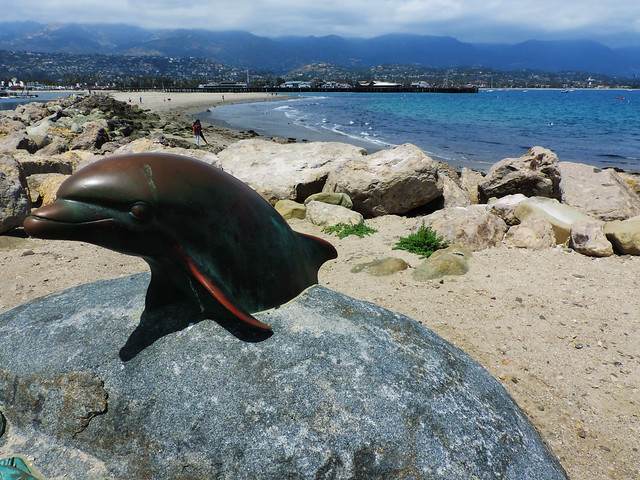 But it’s not only the big cities that impressed us. We enjoyed discovering the wonderful Pacific coast and in addition to the unforgettable landscapes and beaches, we found some seriously charming coastal towns.

Sausalito and Carmel are both in Central California and they look like a painting: pretty houses with even prettier ocean views, lovely walking streets with flowers and palm trees and nice beaches. Monterey is a lively little harbor with the best aquarium we’ve ever seen (Monterey Bay Aquarium). Santa Cruz is the surfers’ favorite and it has an awesome beach boardwalk with an amusement park. 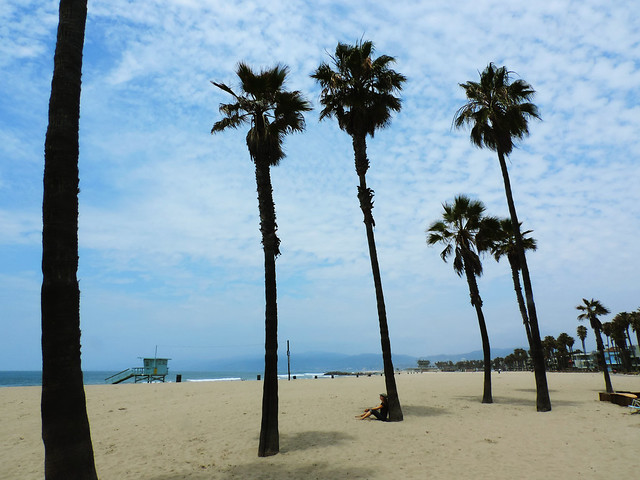 I haven’t mentioned Los Angeles in this post yet though it’s definitely a big city and it’s located in California. We just happened not to like it. But it’s not the case with its surroundings! There’s some adorable beaches and coastal towns like Santa Monica, Venice Beach, Laguna Beach or Santa Barbara.

Something for wine lovers

You expect me to finish this post soon, right? (Well, it’s my longest post ever, I guess.) But California still has more to offer. Ocean, mountains, deserts, waterfalls, fascinating forests, cool cities and lovely small towns are all checked. What else? Wine. Napa Valley is among the best wine regions in the world. They say.

We have to believe because we don’t know much about wine and we don’t even like it. What we can tell from our experience is that Napa Valley is a nice region for hiking, too. 😛 And Castello di Amorosa is a very attractive winery. 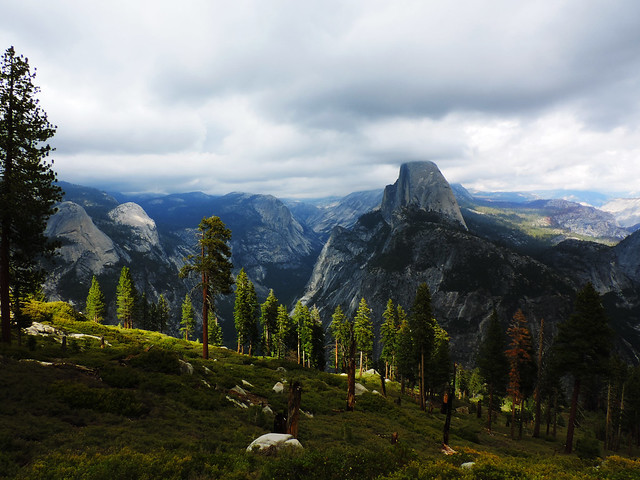 California’s weather was another thing we liked from the beginning. I love sunshine. Summer is my favorite season and I don’t mind hot weather either. Since we are together I’ve always teased Csaba telling him that if he really loves me he should make eternal summer in the world – or at least where we are. Is that such a big thing to ask after all? 😛 ‘Now you have your eternal summer’ – that was one of the first things he said to me when we moved to Cali.

Okay, eternal summer is not entirely true, but eternal sunshine is. We felt like there’s only two seasons in Central California: after a long summer it starts to feel like getting autumn, but autumn and winter never comes, spring comes instead. If we still want to have winter, we can drive up to the Sierra Nevada anytime from October to April. That’s what we call perfect weather. 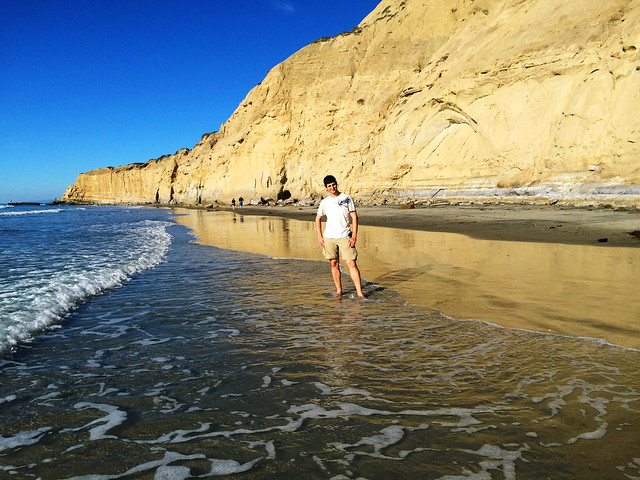 We spent almost all of our free time outdoors and hiked as much in California as never before. Our seasons were not spring, summer, autumn and winter, they were rather foggy and sunny season on the ocean coast, rainy season in the redwoods, waterfall season, hiking in the desert-season, time to see newborn elephant seal pups-season, hiking in the high Sierras-season and so on… There’s already a series of posts covering this topic on the blog: read here which are the best hikes throughout the year in California! 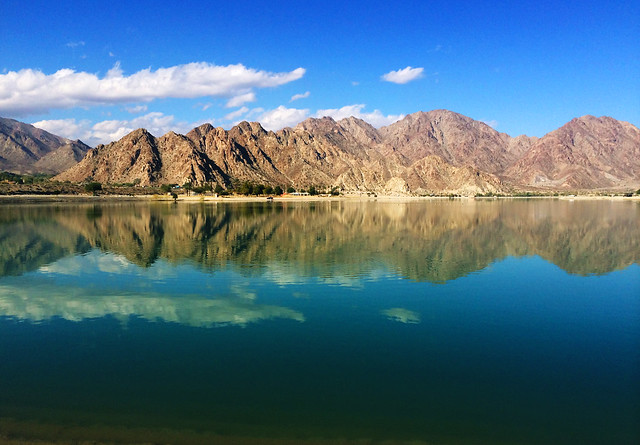 For now. Does California seem to be too perfect to be true? You know, we are in love, that’s our only excuse but it’s a good one. Otherwise? Go and explore for yourself. We gave some ideas what to see, that’s for sure. 🙂

What about your ‘perfect place’? Is there a place that lit your inner fire?