Ireland is also called the Emerald Island due to its lush green countryside. And that is thanks to the frequent rains. But frequent rains mean something else, too: beautiful waterfalls! As we drove around the island, we found lots of pretty waterfalls in addition to the breathtaking coastal hikes, lakes and ancient ruins. So let us show you our favorite waterfalls in both Ireland and Northern Ireland.

Even though Ireland is not particularly famous for waterfalls, nor it has very tall ones, we were amazed how many waterfalls we found on our way around the island. And they have one thing in common: none of them dries out easily. They had lots of water, so even the smaller ones were impressive. And most of them are quite easily accessible. No excuse to miss them. 😛 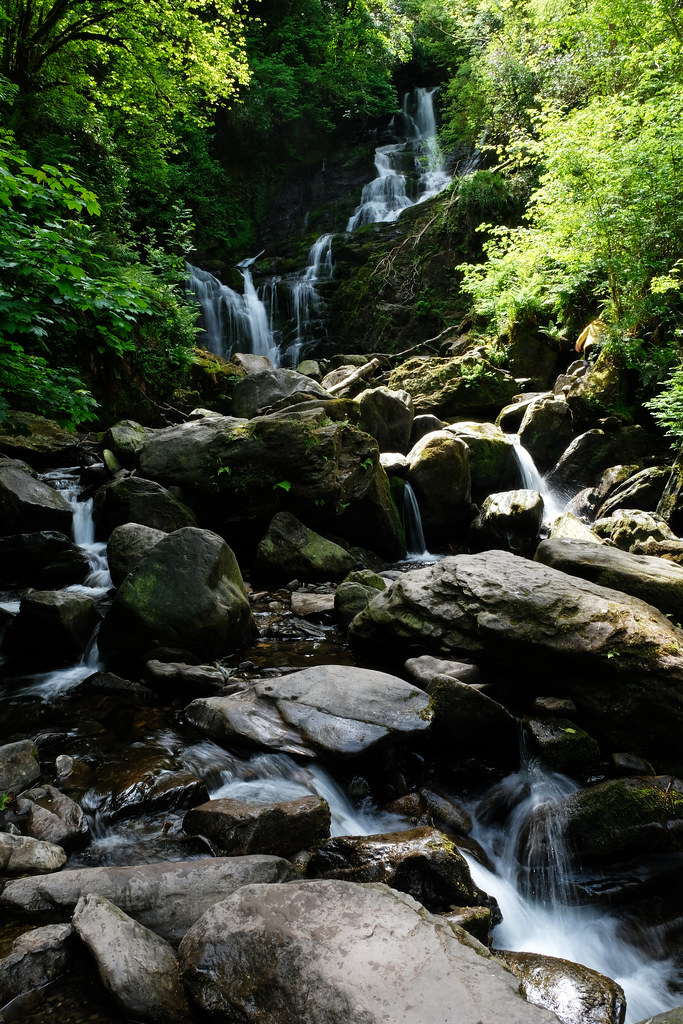 Killarney National Park is one of the most popular places to visit in Ireland. And Torc Waterfall is the only waterfall in the country that we’d call crowded. It could have something to do with being so close to the Ring of Kerry scenic route, and also with the fact that it’s accessible by a couple of minutes walk from the parking lot. (The most challenging part was to find a space to park, because that parking lot is not large at all.)

Torc Waterfall itself is a lovely, 20 meters tall waterfall surrounded by mossy rocks and lush greenery. The above picture is the result of both my patience and photo editing skills. I tried to wait for the crowd to go away, but it seemed to be pointless. Finally, I only needed to remove about 3 people (all wearing vibrantly colored raincoats, of course) from the picture. 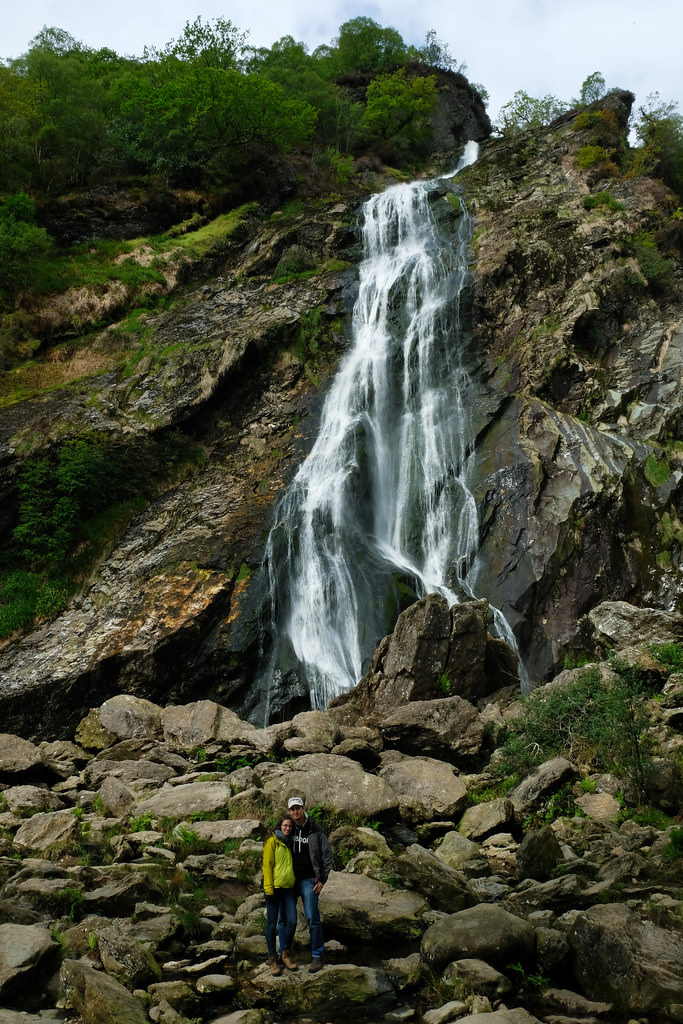 121 meters tall Powerscourt Waterfall is said to be the highest waterfall in Ireland. Also, it’s the only one where we had to pay fee to visit since it’s located on the Powerscourt Estate. Not that it’s not worth it, the waterfall is truly pretty. The only thing we were sorry about is that it’s so close to the parking lot that we didn’t need to hike, not even a little bit. But there are nice facilities – toilets, a little kiosk and a playground – at the parking lot, as well. 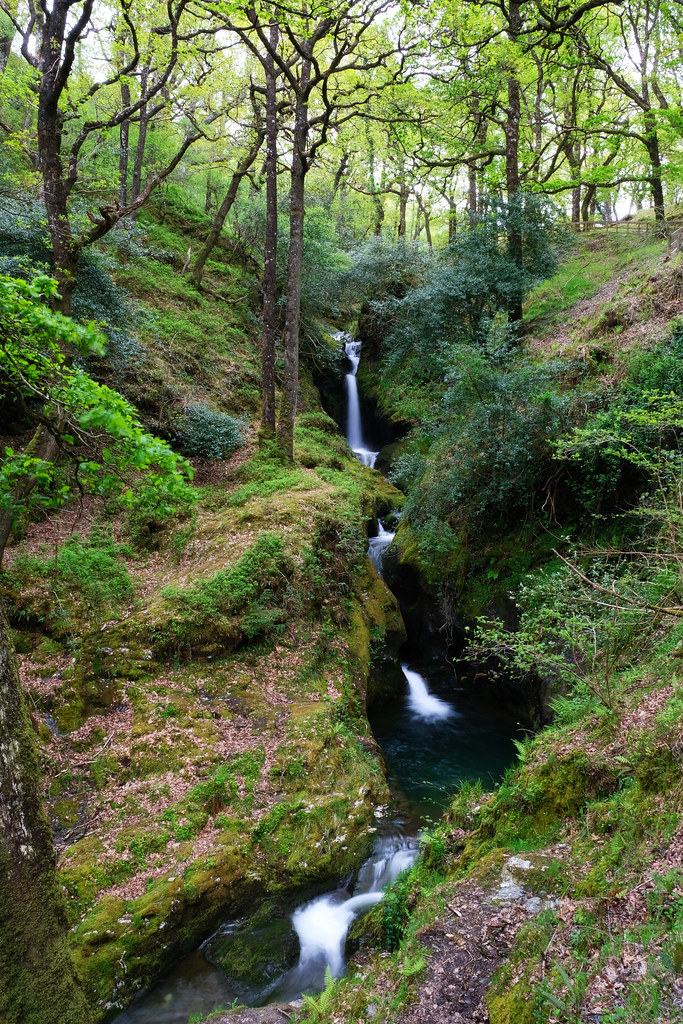 Poulanass Waterfall is a small one, and it’s not only the waterfall that’s charming there but the whole setting: the narrow glen and the surrounding forest. There’s a short trail from Glendalough Upper Lake to reach the waterfall. It’s marked with pink and it’s a 45 minutes loop trail.

We left our car at the huge paid lot at Glendalough Upper Lake, then took the pink trail and continued on the white trail. The white trail is a longer loop (about 9 kilometres) that took us around Glendalough Upper Lake, and offered astonishing views of the wild landscape of Wicklow Mountains National Park. Finally, the fog descended and it started drizzling. But even that went well with the landscape. Well, it’s Ireland… 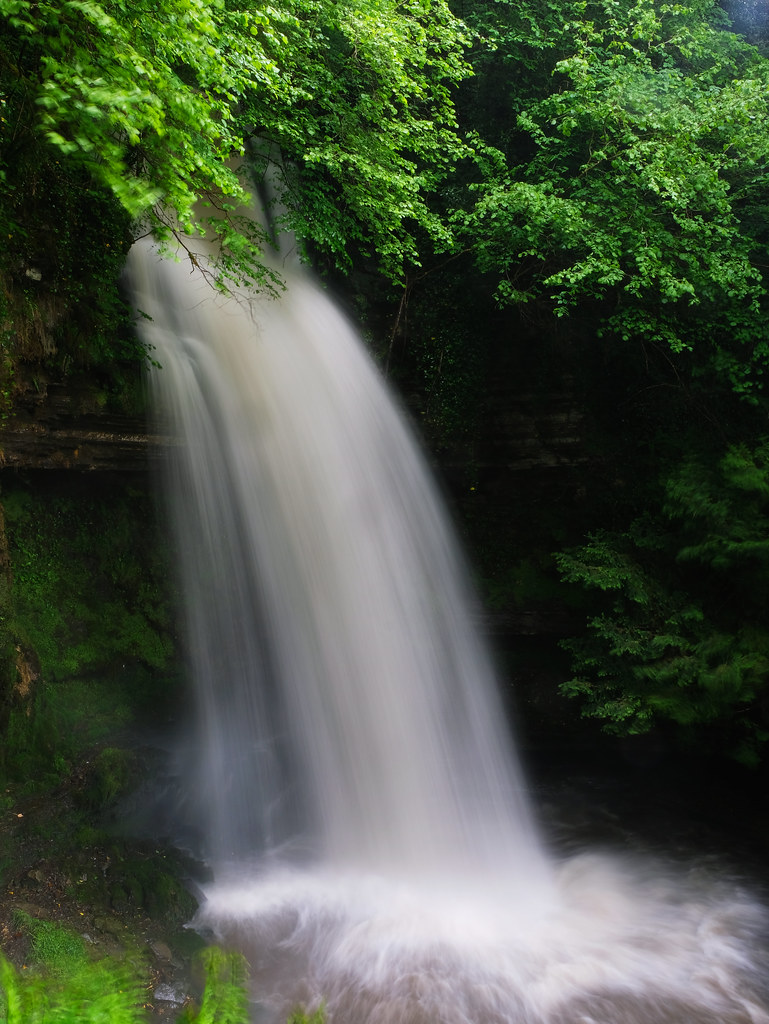 We arrived to a parking lot that was right by a green meadow full of grazing sheep with Glencar Lake in the background. The sun was shining bright. We walked a couple of minutes on a forest path to Glencar Waterfall. The 15 meters tall waterfall was roaring! We could walk really close to it and felt the mist as the wind blew it into our faces. No long hike here, but we continued to a nearby waterfall… 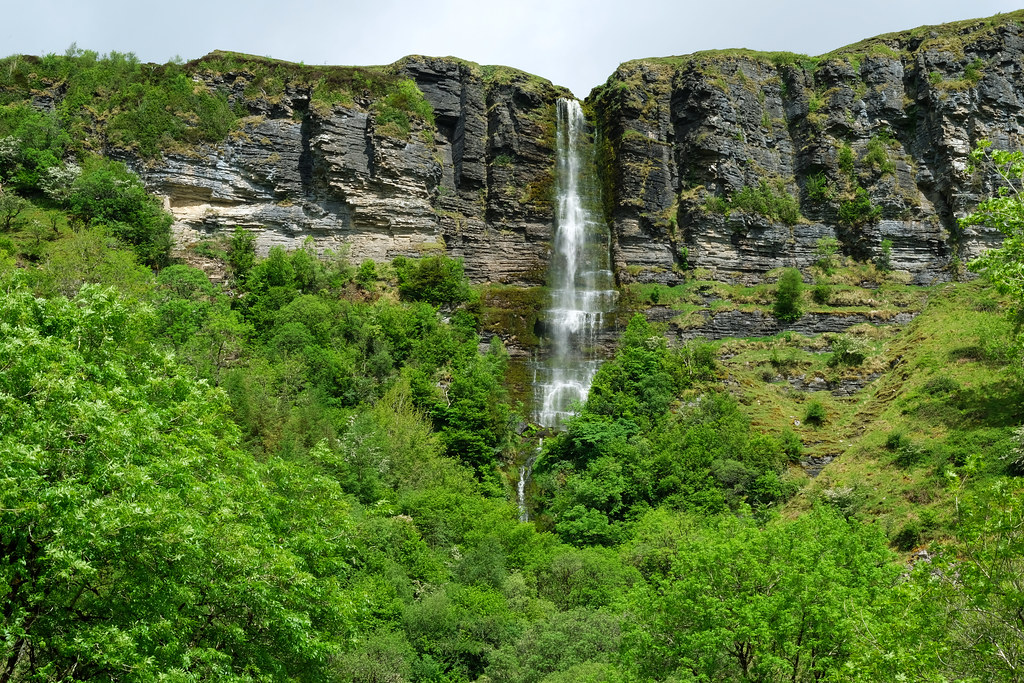 So Devil’s Chimney can be seen from the road on the way to Glencar Waterfall. That’s how we found it. We stopped at a pullout and tried to figure out how we could get closer. Well, that pullout turned out to be the trailhead. It’s a somewhat longer and steeper walk that took us up to the bottom of Devil’s Chimney than the one to Glencar Waterfall. And Devil’s Chminey is a mighty waterfall, almost 150 metres tall!

The sign at the trailhead warned us that it doesn’t flow during periods of dry weather. We’re not sure when that could be. Anyway, we’ve seen a huge waterfall that reminded us a bit of Yosemite Falls. 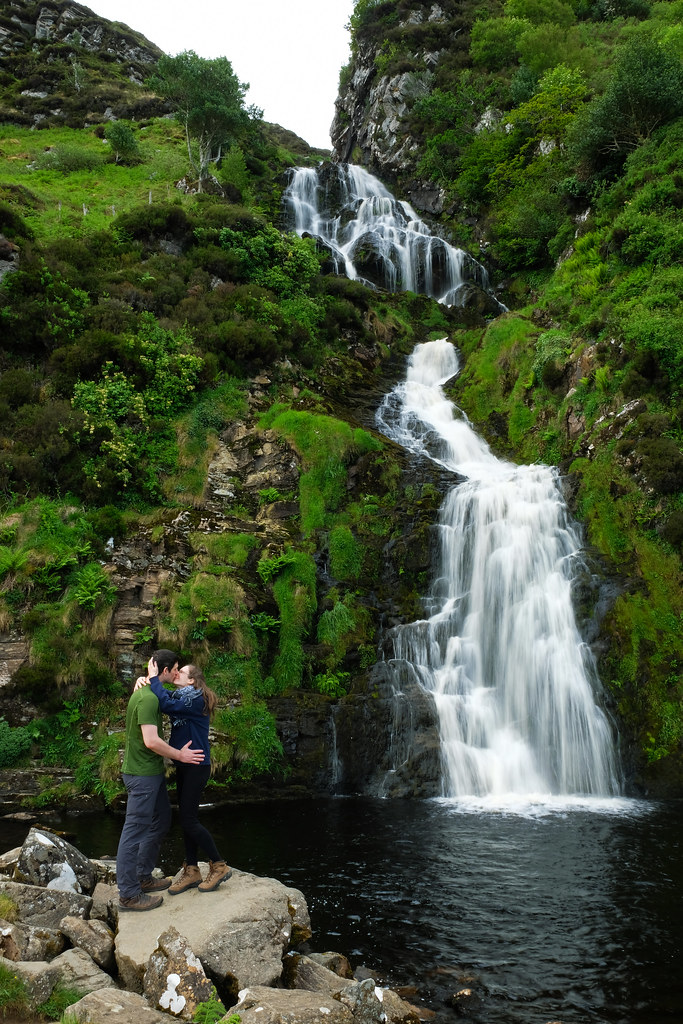 Another easily accessible, magnificent waterfall as we drove north: 95 metres tall Assaranca Waterfall. It’s actually so easy to access that it’s right by the road. Despite of this there were no one around when we arrived. County Donegal is not a busy region, anyway, because it’s quite remote. But it just added to its magic in our eyes, it was one of our favorite counties in Ireland. 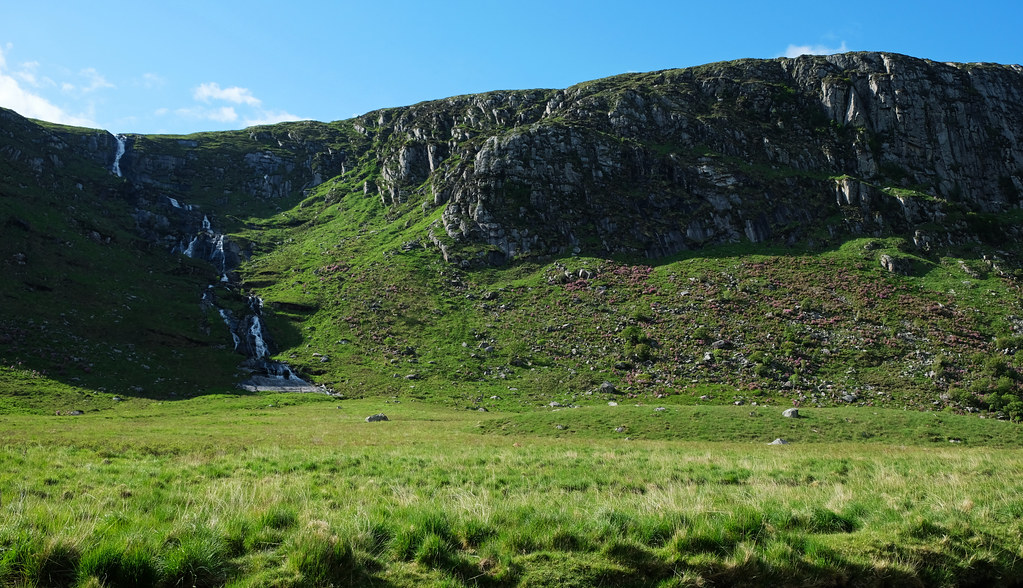 Glenveagh National Park is a wonderful place: windblown hilltops, castle by the lake and a large waterfall. And a scenic loop trail that offers great views of all that and makes for a perfect day hike. We loved it! And loved it even more in the sunshine.

Even though we couldn’t get very close to the waterfall, because there’s no trail and the terrain is quite boggy, it impressed from the distance, too. The Glen Walk that gives access to it starts from Glenveagh Castle and led us on mostly flat terrain along the lakeshore and further into a narrow valley. It took about 2 hours there and back to the castle. 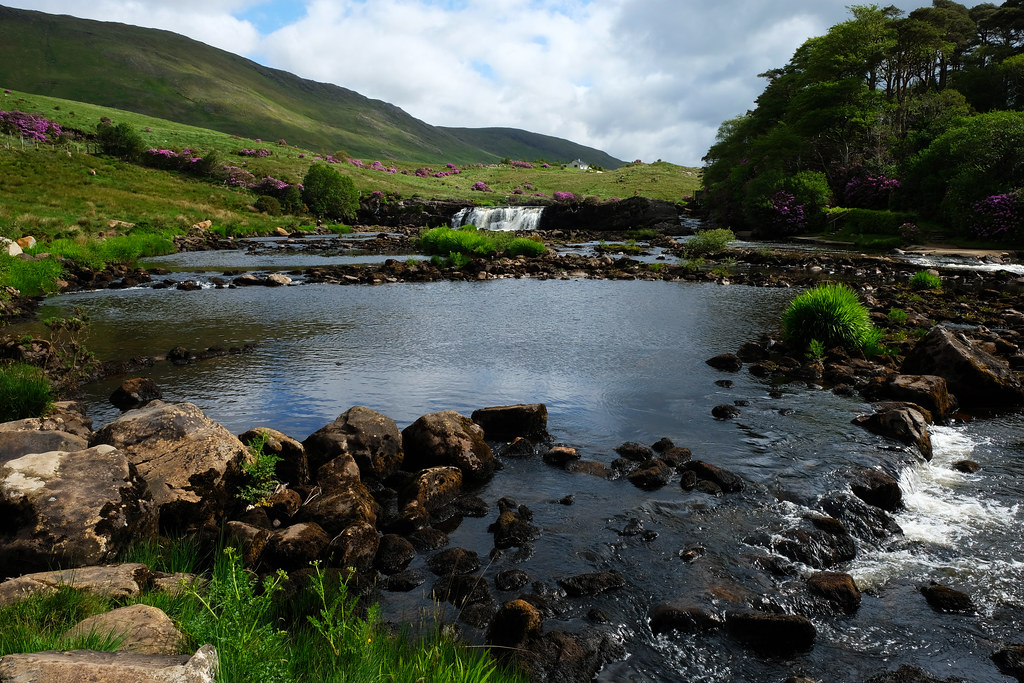 This was another waterfall that we accidentally saw by the road as we left Killary Fjord, and continued on the Wild Atlantic Way. Even though Aasleagh Falls is only 3.5 meters tall – which sounds ridiculously small -, it’s wide enough and has lots of water to make it impressive. Not to mention the surrounding green hills and the thousands of blooming pink flowers. Size is not all that matters, hah. 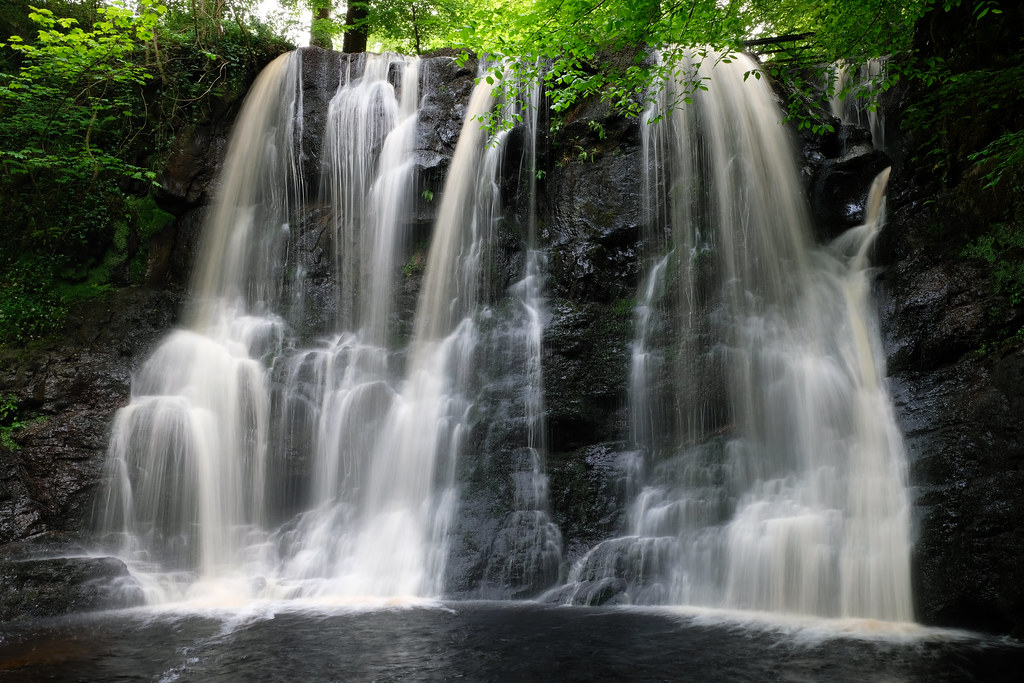 And last but not least, the most fabulous place to see waterfalls in Northern Ireland: Glenariff Forest Park. They say three is the magic number. Well, the Waterfall Walk Trail is a 3 kilometres long loop trail that passes 3 lovely waterfalls in Glenariff Forest Park. And the whole trail through the forest and along the clear cascading stream did make us feel like being in a fairy tale.

There’s entrance fee to the park. Also, there’s a visitor center with a restaurant and gift shop, and lovely picnic benches with views of the Glenariff glen.