After spending a month with a toddler in Croatia (and after several Croatian beach holidays as a kid) it’s time to write about the best family-friendly beaches in Croatia. But first of all, are Croatian beaches in general suitable for kids? Lots of them are!

The Adriatic coastline of Croatia is the most indented in the Mediterranean which means it’s very protected. Waves are usually gentle, and you don’t need to worry about currents. Water is crystal clear, lots of beaches have the Blue Flag that indicates excellent water quality. 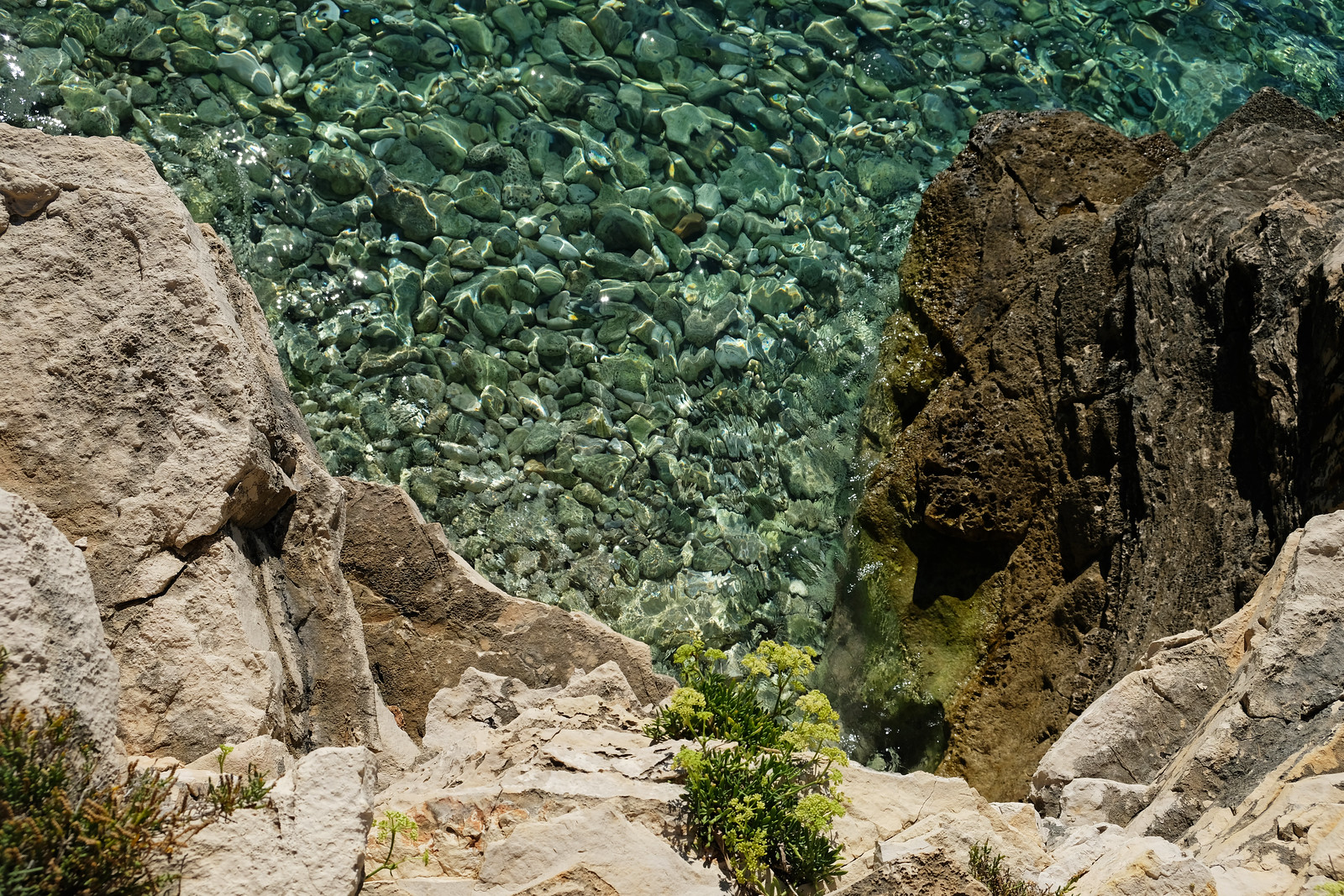 However, if you imagine your family-friendly beach with soft sand and very shallow water, it’s not that straightforward to find in Croatia. You can find some that are like that, but Croatia’s beaches are mostly rocky or pebbly, and you want to wear your water shoes (snorkel shoes) on them so that your feet won’t get hurt. These beaches are not that great with small kids – also, the water usually gets deep very soon.

But there are beaches with small, fine pebbles that can be enjoyed barefoot, and you can also find a few sandy beaches. The beaches we show you in this post are not necessarily the most breathtaking ones (Croatia excels in rocky and pebbly beaches, its sandy beaches are not world-class), but they’re the most family-friendly. Put a few of them into your itinerary if you visit Croatia with small kids.

They’re ordered by location – from north to south, starting with Istria:

Cape Kamenjak Nature Park is our favorite place in Istria, and it offers such a variety of beaches that it would be hard not to find one that’s suitable for you. The most protected, shallow bays are on the east side of the peninsula, and Mali Portić Beach is the only one that’s also sandy. 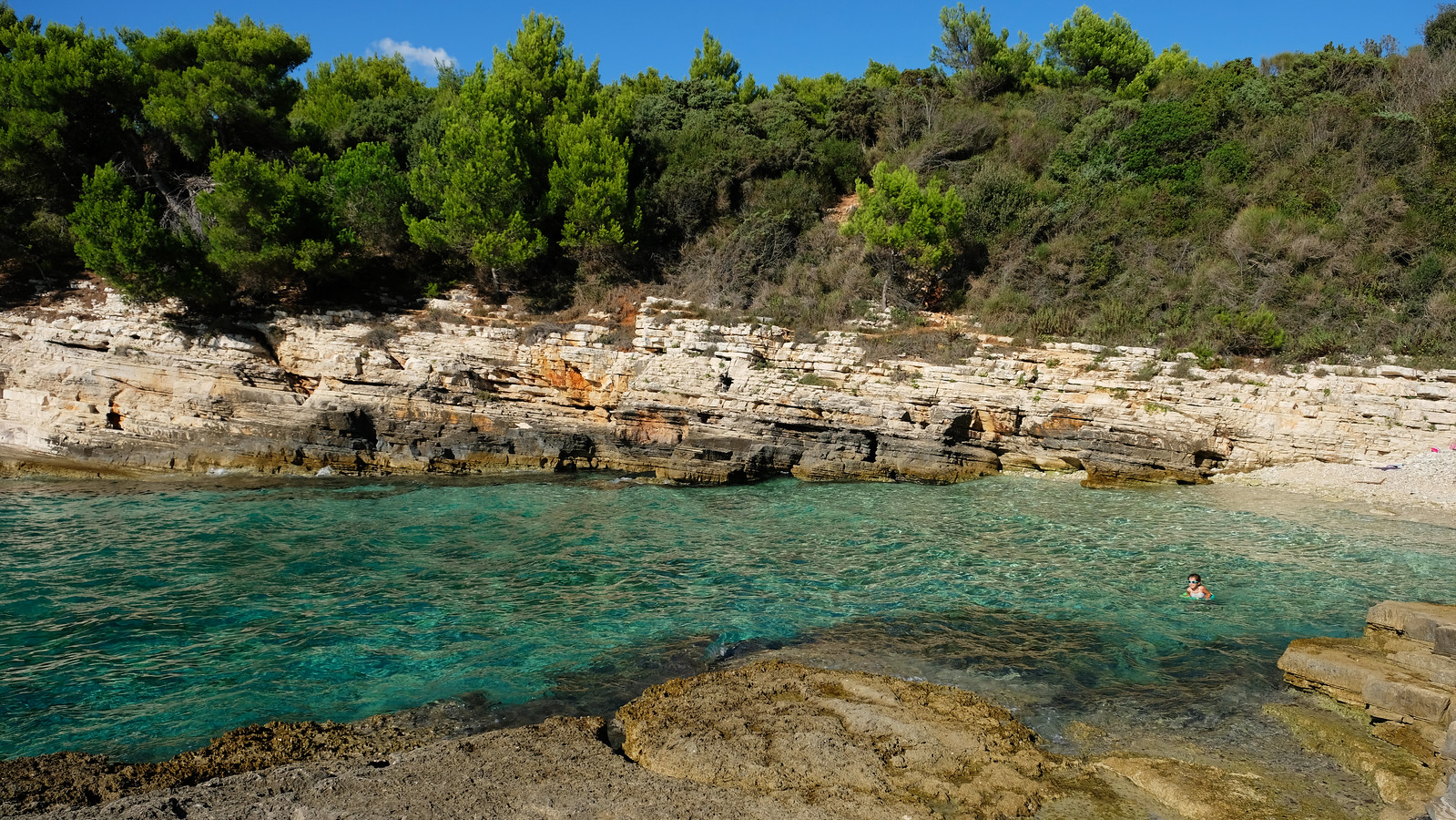 However, we found the west side of Kamenjak more scenic, and our favorite beaches are there. Plovanije and Radovica Beaches are not just incredibly pretty, but family-friendly, too. Both bays are relatively small and protected. They’re pebbly, but pebbles are small, and you can walk barefoot on them. They offer a smooth entrance to the water, but you can choose to jump in from the rocks at the edge of the bay if you yearn for adventure.

All in all, if you want the best beach for kids, it might be Mali Portić, but if you want a beach that’ll equally amaze kids and their parents, it’s rather Plovanije or Radovica. They were tested with 1 year old Tomi who loved playing with the pebbles and splashing in the shallow entrance to the water.

This beach was not tested by Tomi, but by me when I was a kid. The reason families love Paradise Beach so much is that it’s a 2 kilometres long strip of sand with very shallow water (knee-deep for about 500 metres). You can even reach the small islet in the bay on foot.

The cons? The water is really shallow. 🙂 Not that ideal for swimming, not to mention snorkeling. It’s a beach to be enjoyed with small kids. 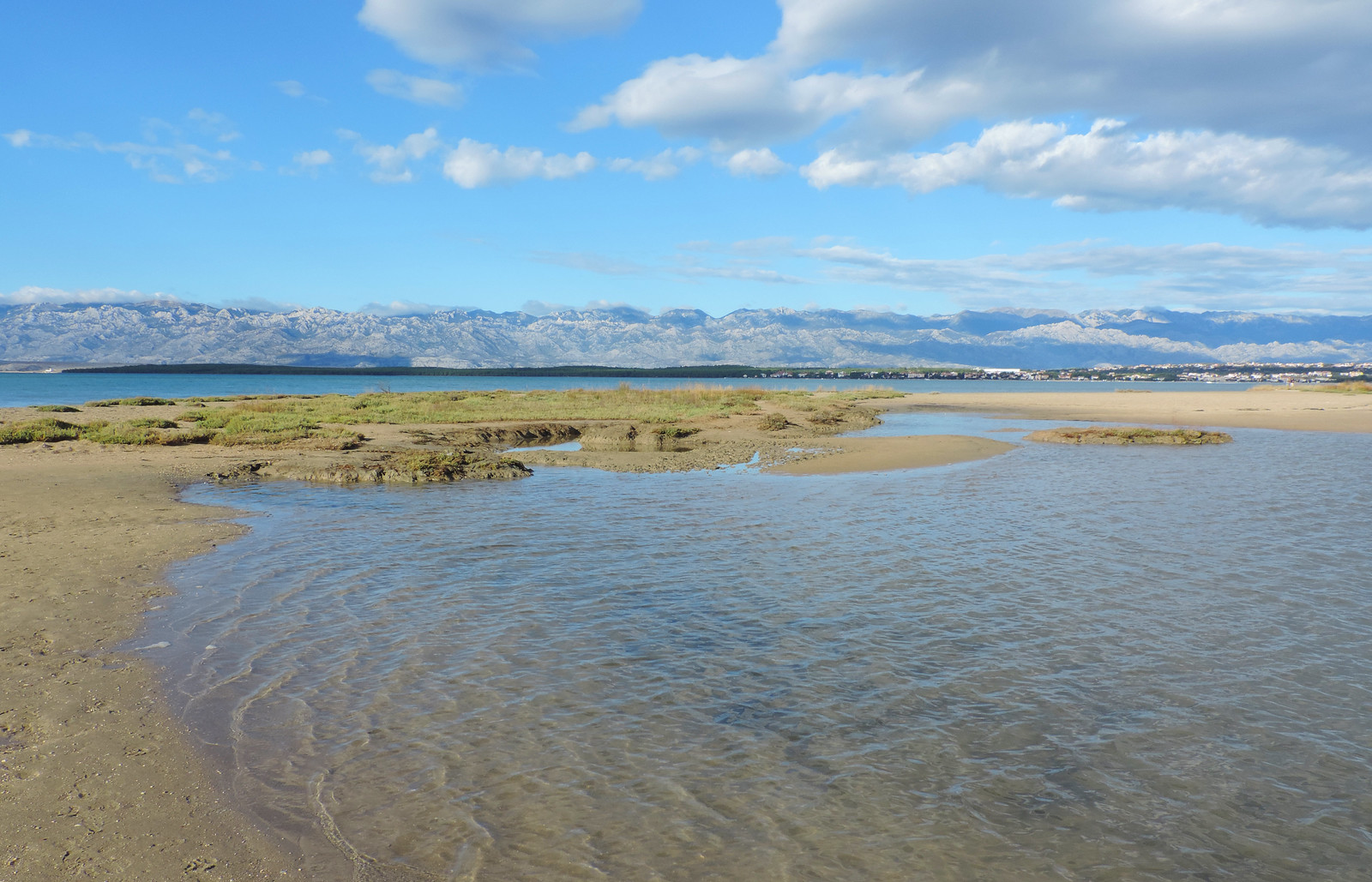 It’s probably the most famous family-friendly beach in Croatia. It’s a 3 kilometres long stretch of sand, and its water is shallow and warm – just the ideal playground for toddlers and small kids who can’t swim. They say that the wife of Croatia’s first king particularly loved this beach, hence the name. You can either walk through a shallow stretch of water or use the wooden paths to reach Queen’s Beach. 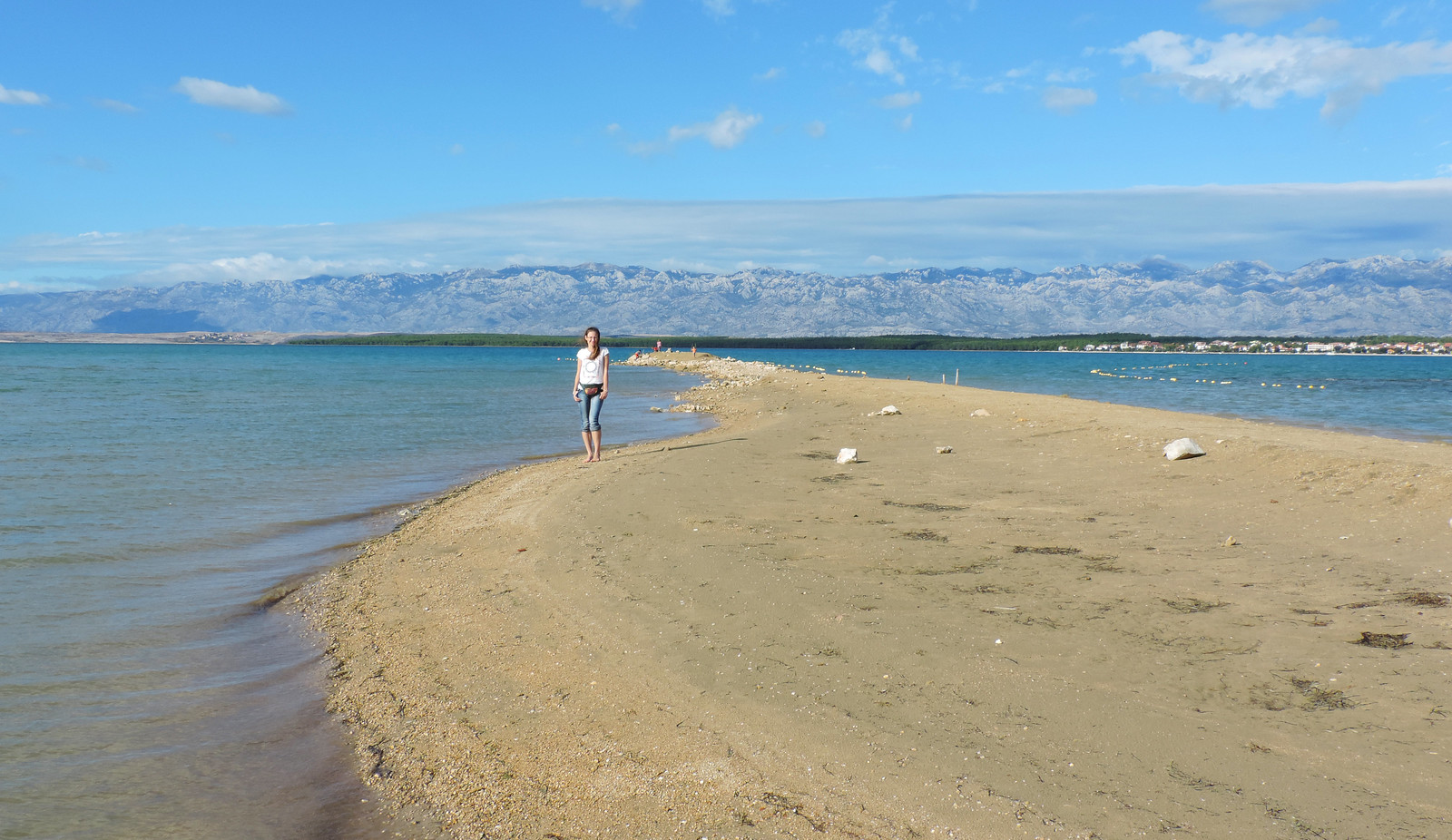 The cons? Again, very shallow water, not ideal for swimming. However, the scenery is better than on Paradise Beach, because this one faces the Velebit Mountains.

Ručica Beach is pebbly, but the pebbles are so small that they almost qualify as rough sand. Tomi enjoyed playing in it, and he also practiced his newly learned walking skills on this beach. 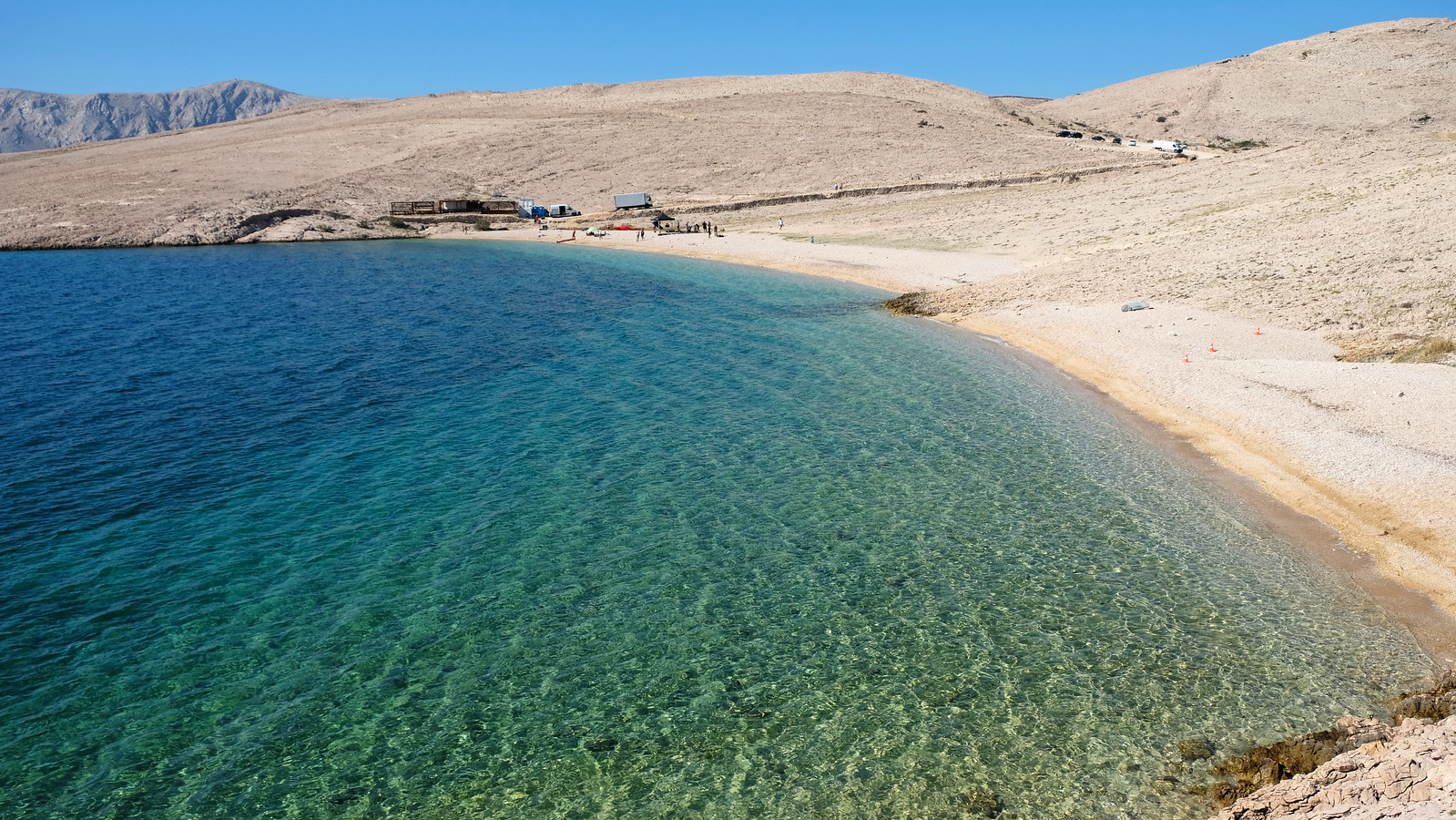 The water is not particularly shallow, however, the bay is very protected. Kids probably won’t care, but their parents will get impressed by the incredibly turquoise water and the bare, rocky landscape that looks like planet Mars. It’s not only for families, but for everyone in search of an especially picturesque beach.

The cons? Absolutely no shade. Have a parasol or a beach tent.

Note: In case you wonder whether I photoshopped everyone out of this shot so that the beach would look like a postcard, the truth is that it was closed due to a commercial shooting when we arrived. So we hiked to nearby Beriknica Bay and only returned to Ručica Beach in the afternoon. I took this picture from that coastal path leading to Beriknica. 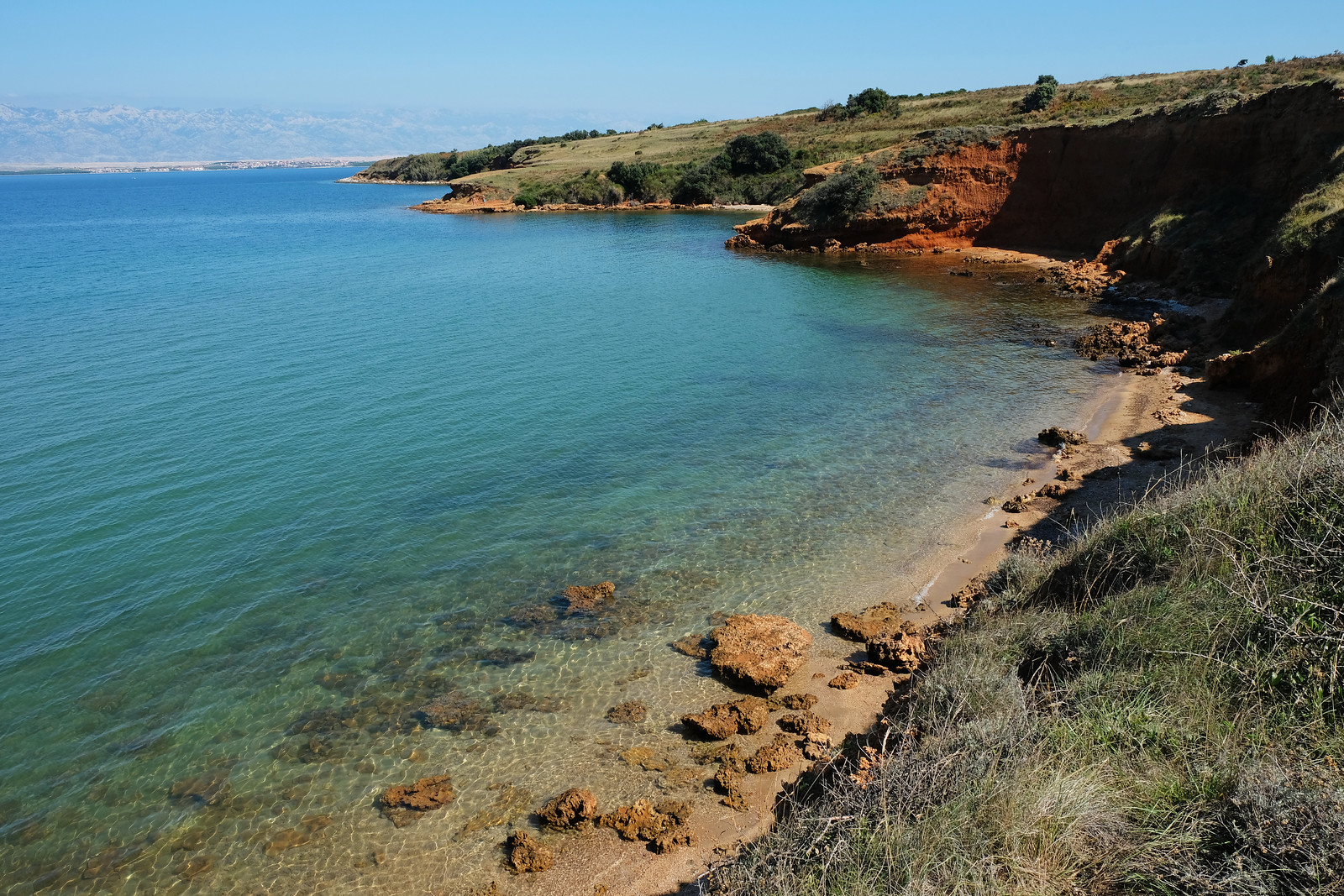 We were stunned by this remote and wonderful beach on Vir, and what’s more, it’s suitable with small kids, too. It’s kind of sandy, rather a mix of rough sand and small pebbles, but the water is relatively shallow. A red wall of sandstone towers behind the beach, and it’s facing the white rocks of Velebit Mountains – which makes it quite attractive not only for the kids. 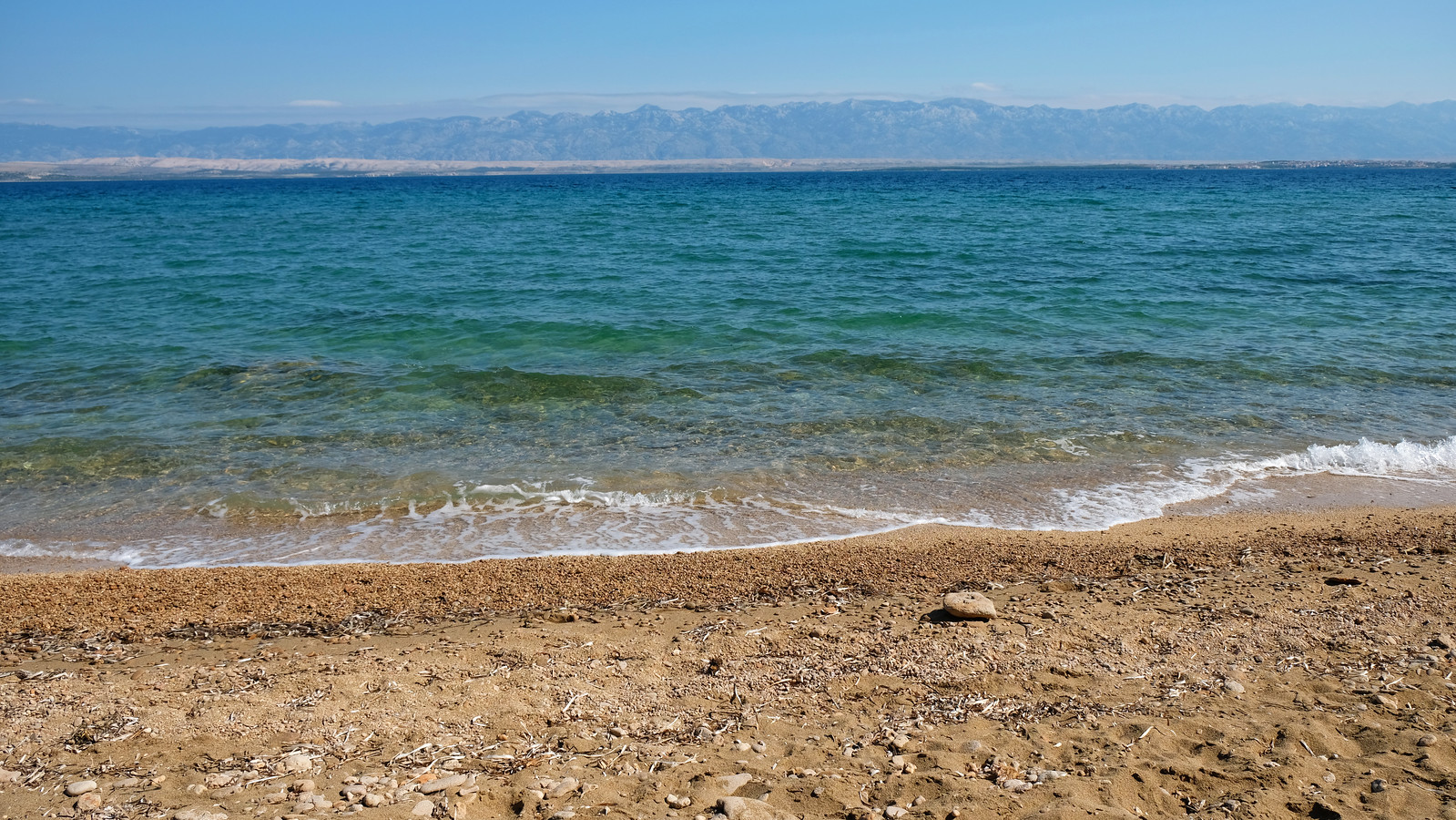 The cons? Unlike all the others in the list, it’s not accessible by car. We walked about 15-20 minutes on a coastal footpath to reach it. 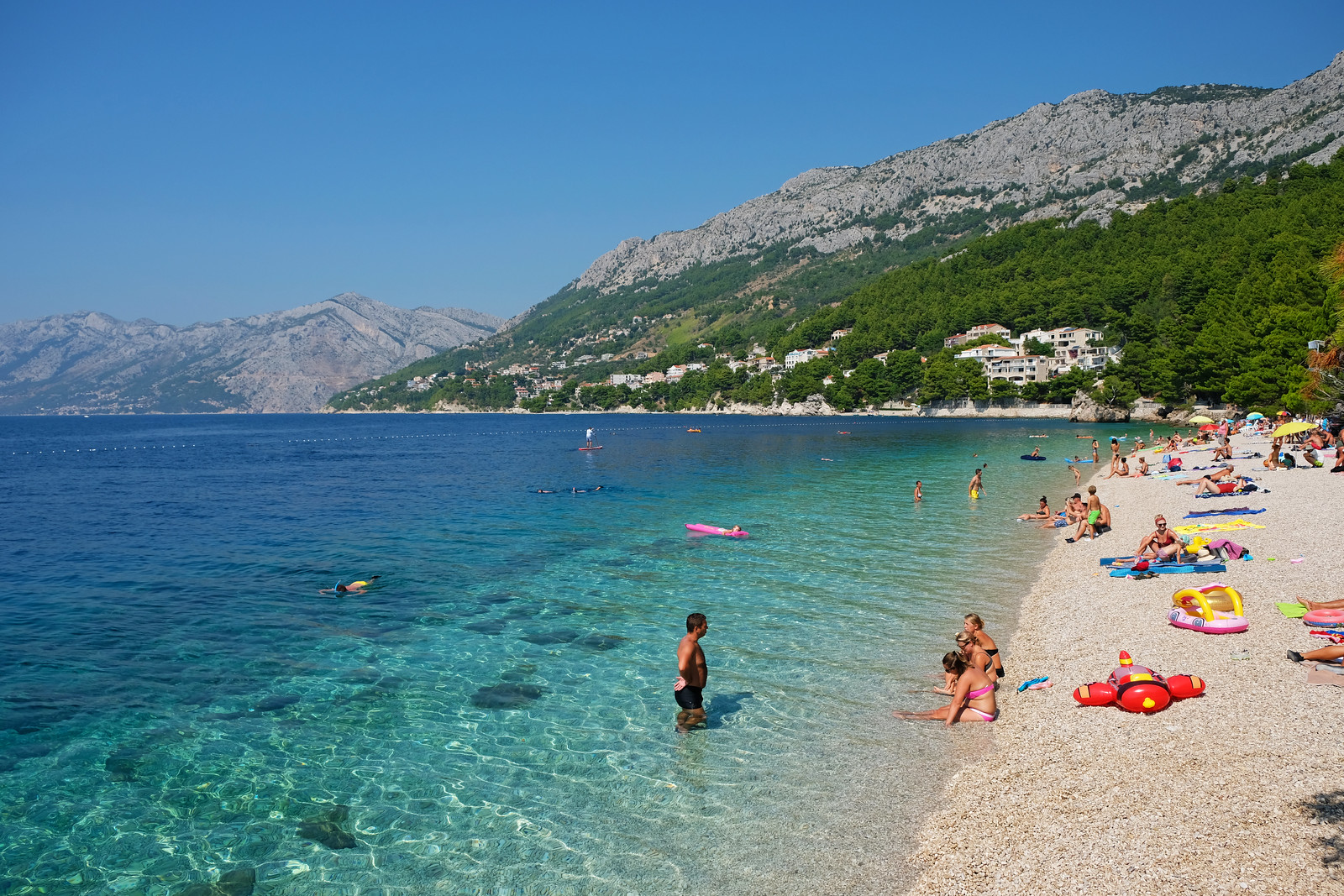 Makarska Riviera is a popular beach region in Dalmatia – and with a good reason. The beaches there are usually pebbly, but pebbles are small and smooth, they won’t hurt your feet, rather give the water a magical turquoise shade. Evergreen pine forests surround them, and the giant white cliffs of Biokovo Mountains stand proud in the background.

One of these beaches is Punta Rata in the small town of Brela. The fine pebbles here are almost like sand, and it’s actually considered a sandy beach in many articles. (It’s not, but it’s very close.) The scenery is stunning, the water is crystal clear (though not that shallow), there’s plenty of shade under the pine trees, and there’s a nice seafront promenade all along the beach and even further, connecting it with other bays in Brela. We think it’s a beach that kids and their parents can equally enjoy. 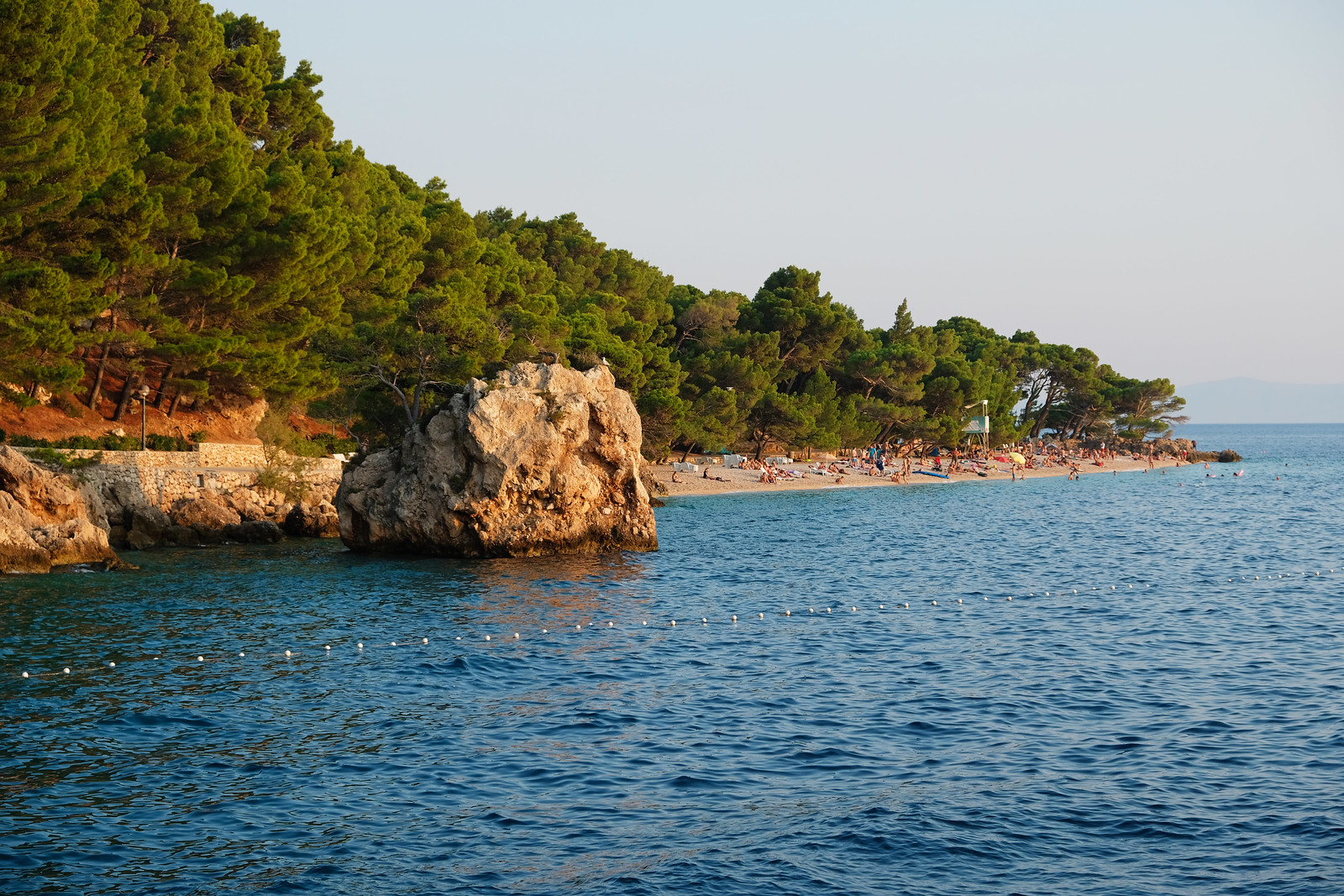 The cons? Parking is expensive. It was double the price of any daily parking fee that we paid in Croatia. You can only use the dedicated (paid) parking lots, street parking nearby is not allowed. If you plan to visit Punta Rata for several days, we recommend staying in Brela in an apartment that offers free private parking and is walking distance from Punta Rata.

Also, while Punta Rata and a lot of other beaches on the Makarska Riviera are great for families, they can get VERY crowded during the summer school holiday (from the end of June until about mid-August). If your kids don’t go to school yet (and honestly, even if they do), we recommend visiting this region early summer or late summer-early fall. 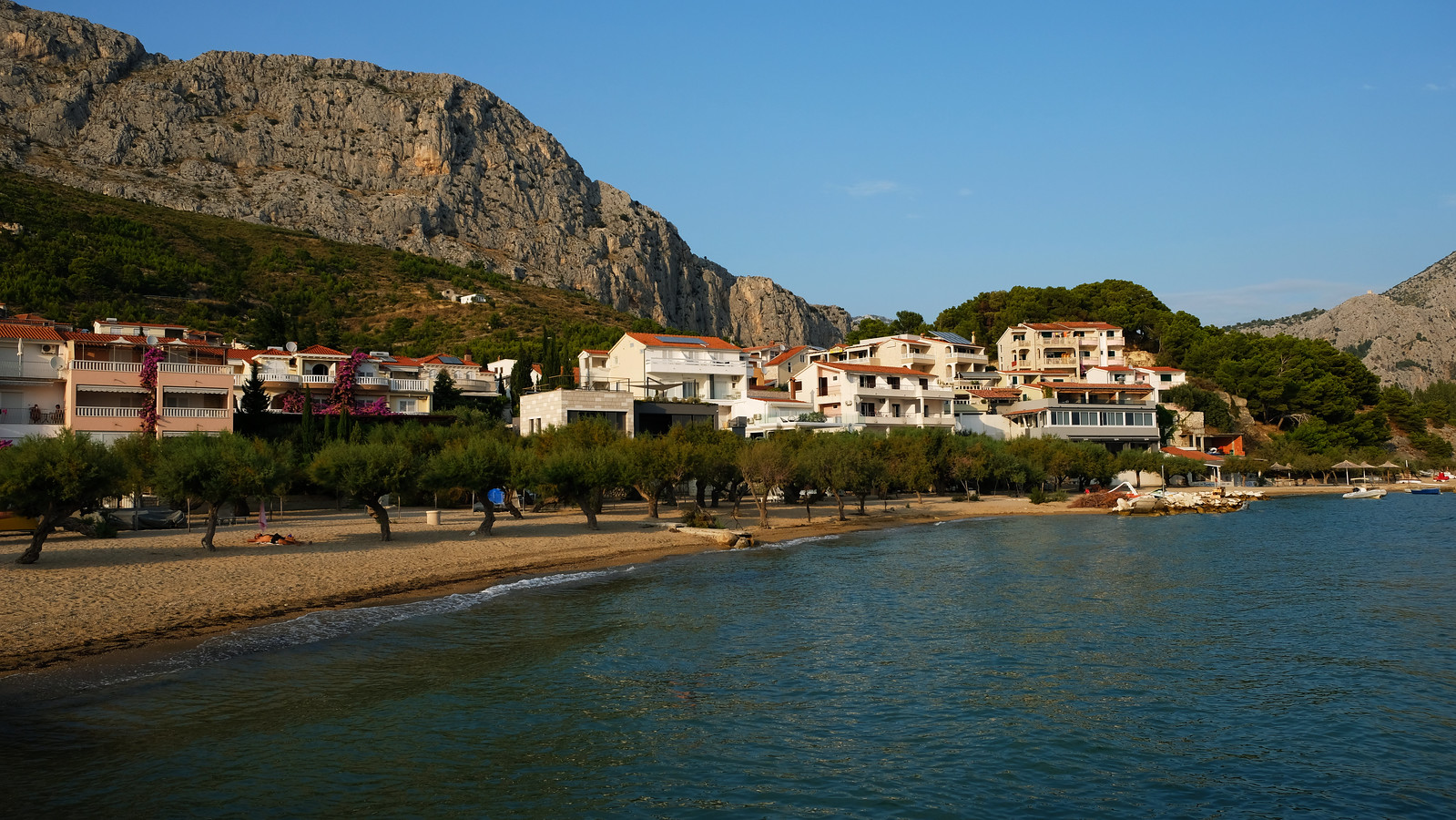 Omiš and the Omiš Riviera is among those few places in Croatia that offer plenty of sandy beaches. Our favorite was Duće Beach, located in a lovely holiday village right next to Omiš. Galeb and Brzet Beaches are close to it, and all three are quite similar: sandy beaches with relatively shallow water, a small bar and trees planted on the beach to give shade. They come with a nice view of the Omiška Dinara Mountains in the background.

We think they’re the nicest sandy beaches we’ve seen in Croatia. (But then, we’ve also told you that we think the nicest beaches of Croatia are not the sandy ones.) Also, there’s plenty of adrenaline-pumping activities in Omiš that older kids will like.

The cons? Colder water. Sea temperature at Omiš is usually 2-3 degrees lower than at nearby Split, because it’s located close to the mouth of a cold mountain river, Cetina. (However, Cetina River is great for rafting.) 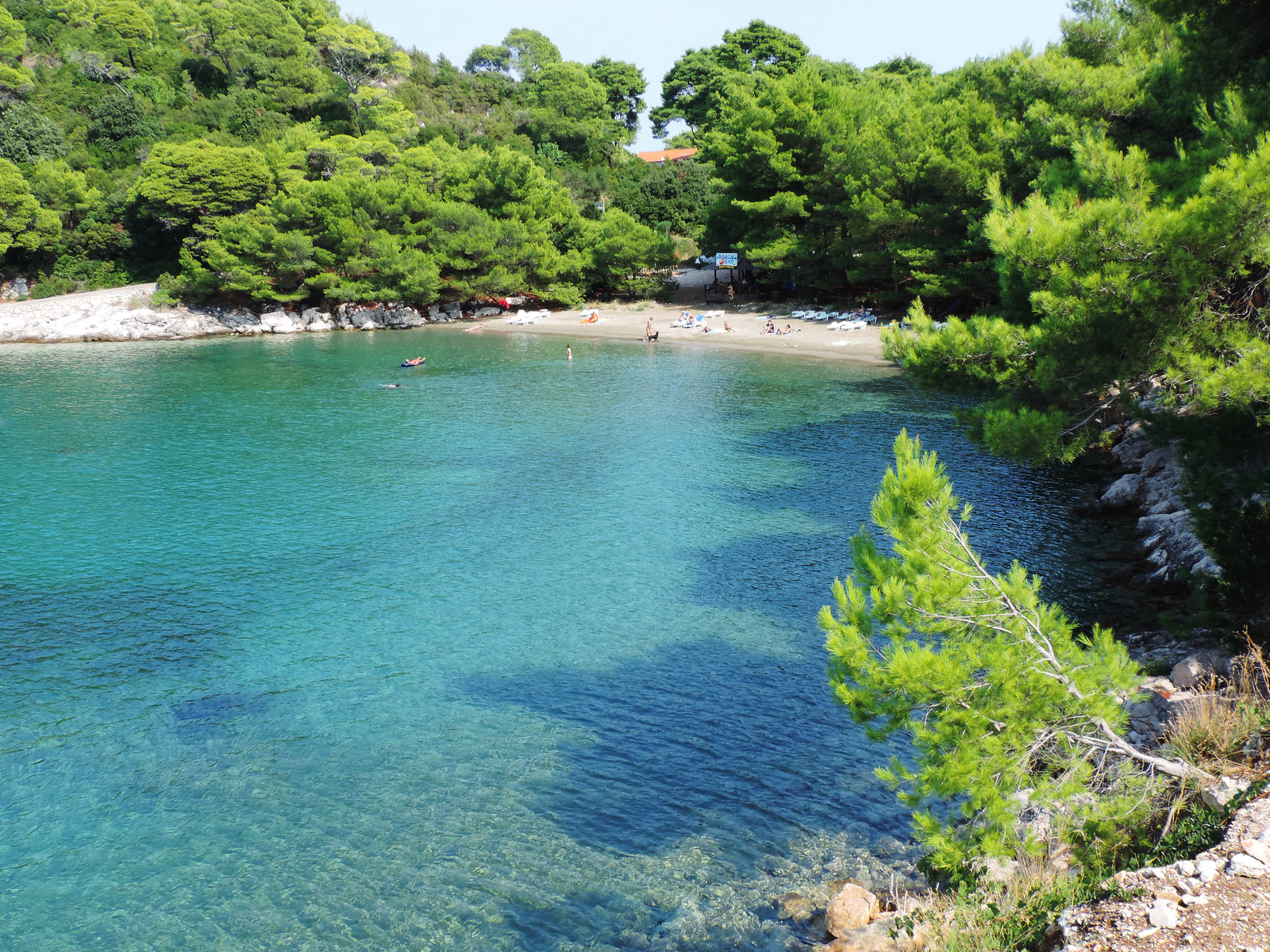 Mljet is such a special island! Okay, Croatia has lots of those, but we liked Mljet, because it’s so lush green and unspoilt. When it comes to swimming and beaches, the salt lakes and the rocky coves of Mljet National Park impressed us the most, but if we have to find a truly family-friendly beach, it’s Saplunara Beach.

The small village of Saplunara is the only place to go for sandy beaches in Mljet. Saplunara Beach consists of two small sandy bays with shallow water, and they’re quite popular. Would you prefer a more peaceful beach?

Lucky you, because we had the same thought, and we also found the suitable place. Though it requires 15-20 minutes of easy walking on a dirt road from Saplunara to nearby Blace Bay. But then you have Blace Beach with its solitude and lush greenery, and it’s perfectly sandy, protected and shallow. Very shallow, you can’t even swim in the bay. 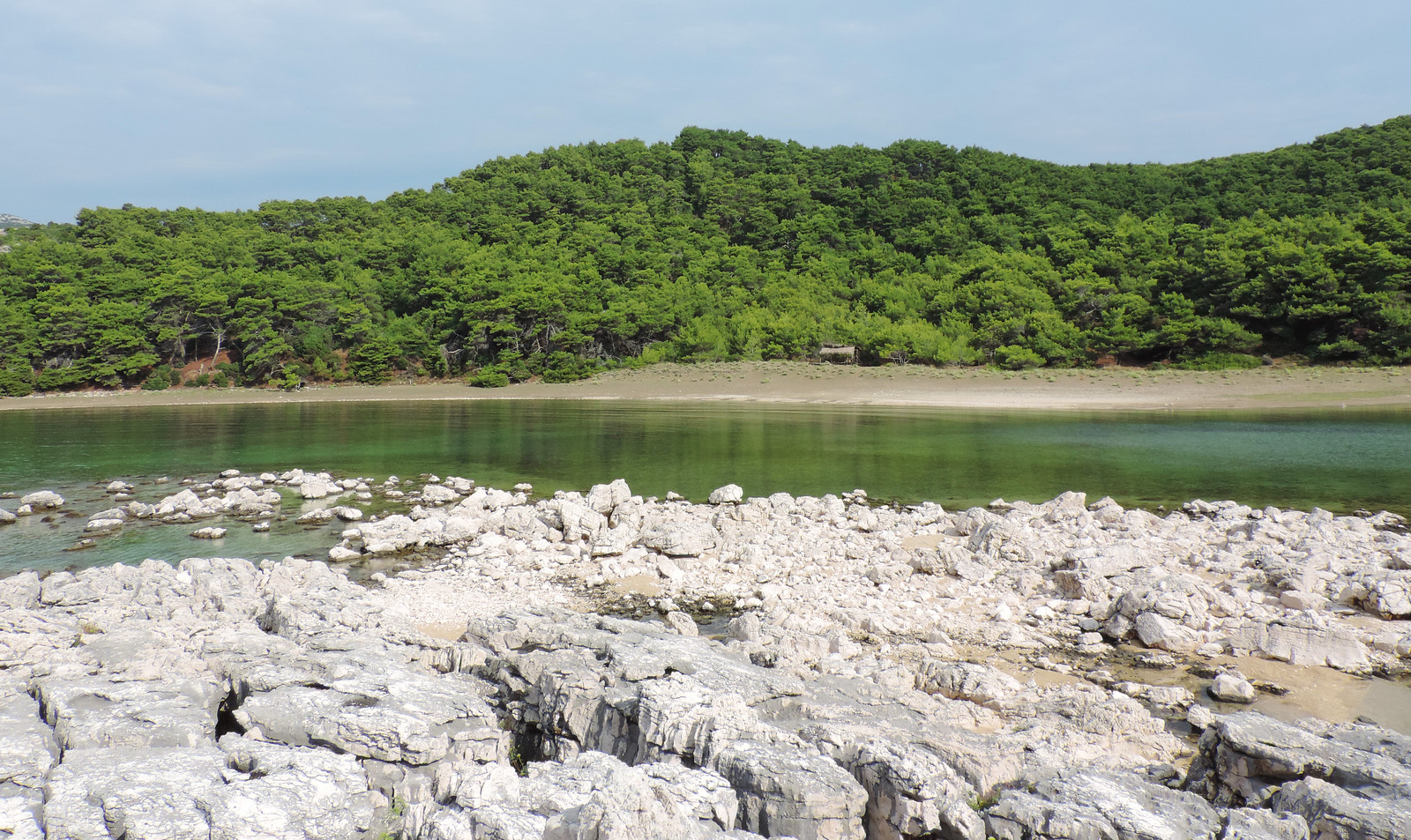 Not all is lost though, you can walk (or rather climb) out of Blace Bay on the rocks, and then jump into the open sea. Water is very deep outside the bay, and it’s better to find a somewhat sheltered cove to get into it. And then Daddy can do some snorkeling while Mum is paying attention to the kids. And the reverse. Or do you have any better idea in case no Grandma can be found nearby? 😀

Sure, there is. However, we only included beaches that we visited in this list. If you have experience about other family-friendly beaches that we haven’t mentioned, please feel free to share them in the comments!