The Kamnik-Savinja Alps in northern Slovenia is for hikers who’d like to wander off the beaten path. While the most famous natural attractions of this tiny country are in the Julian Alps (Lake Bled and Bohinj, Soča Valley or Vršič Pass), the Kamnik Alps also offer some impressive, but less busy sights. Though it’s close to Ljubljana, the Slovene capital, so I can’t promise it won’t be busy enough with locals on a nice summer weekend. 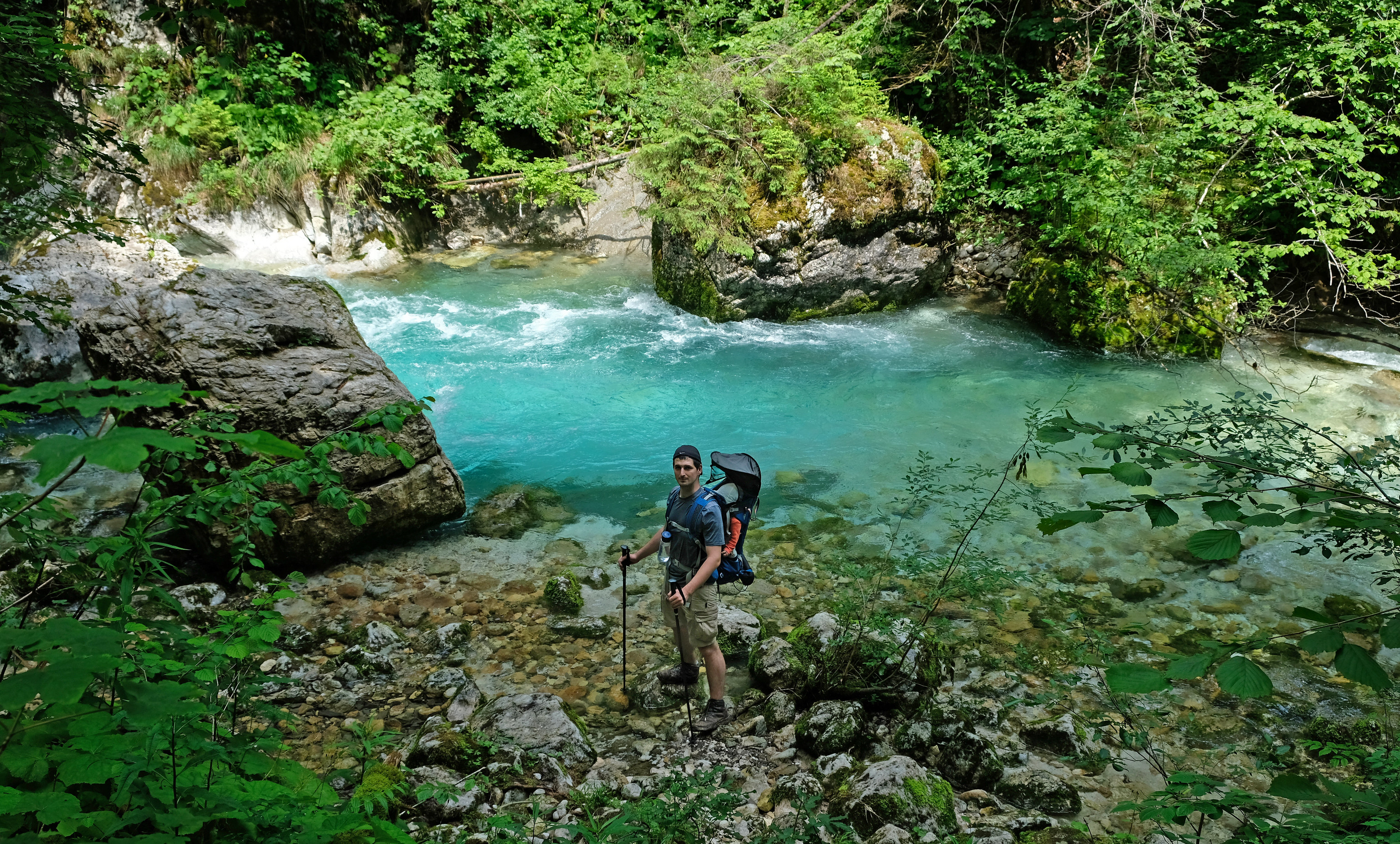 We’ve already written about Logar Valley, one of the most spectacular places to visit in the Kamnik-Savinja Alps. Now we show you the western region, named after the town of Kamnik in the valley of the Kamniška Bistrica River.

In general the Kamnik Alps offer lots of demanding and technical trails that are for experienced hikers (and climbers). Its highest peak is Grintovec that reaches 2558 meters, but you can ascend to it in one day. Then it has multi-day trails with mountain huts on the way. But what about day hikes for the average hiker? Here, here, this post is all about them:

The most popular trailhead: the spring of Kamniška Bistrica river 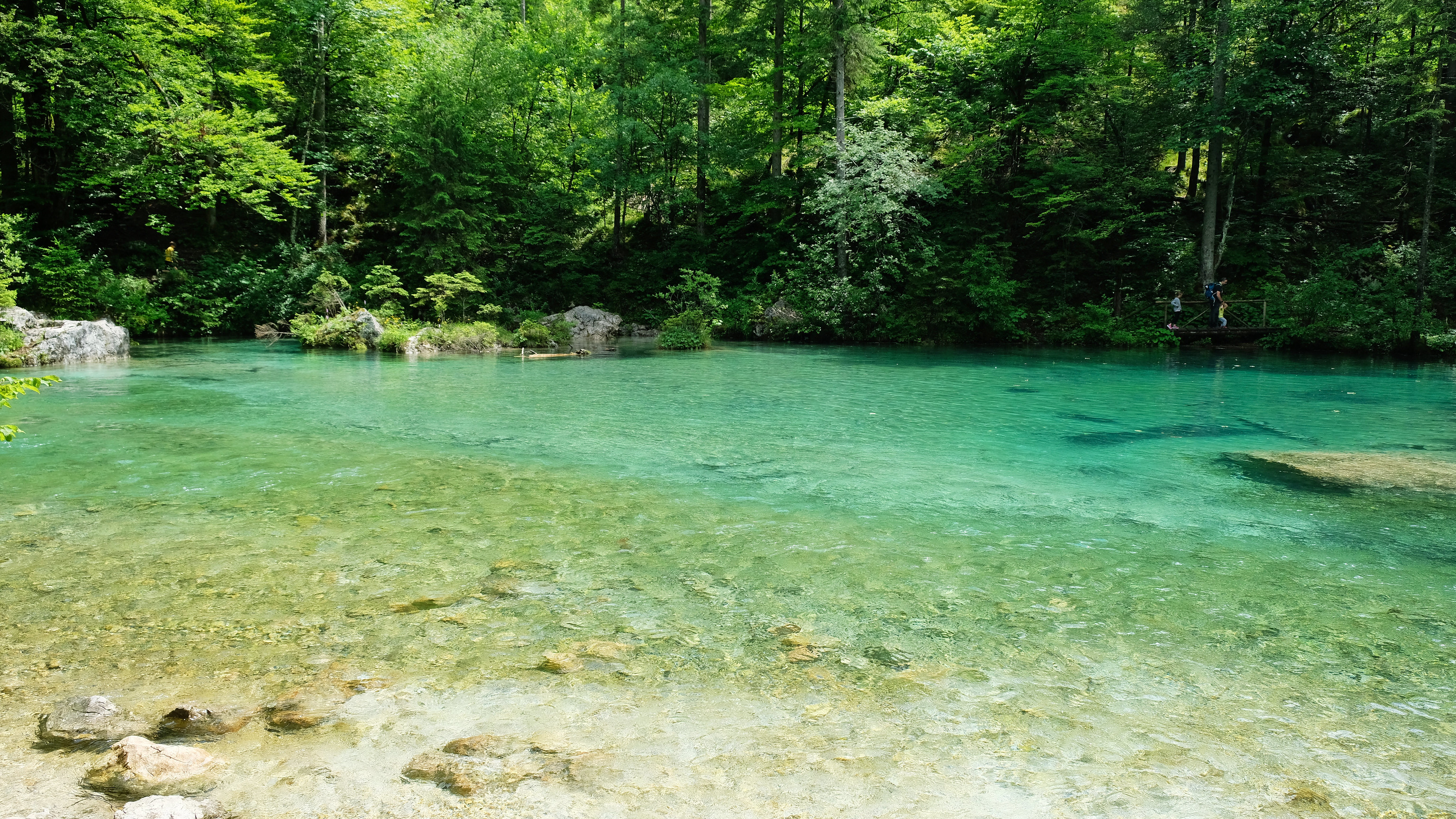 There’s a place that everyone can – and should – visit in the Kamnik Alps: a small lake with crystal clear, emerald green water which is the spring of the Kamniška Bistrica river. It can be reached in 20 minutes from Kamnik by car, and it’s at the end of the dead-end road where several trails start. There’s also a free parking lot where the road ends, however, it can fill up quickly on summer weekends, so arrive early in the day. 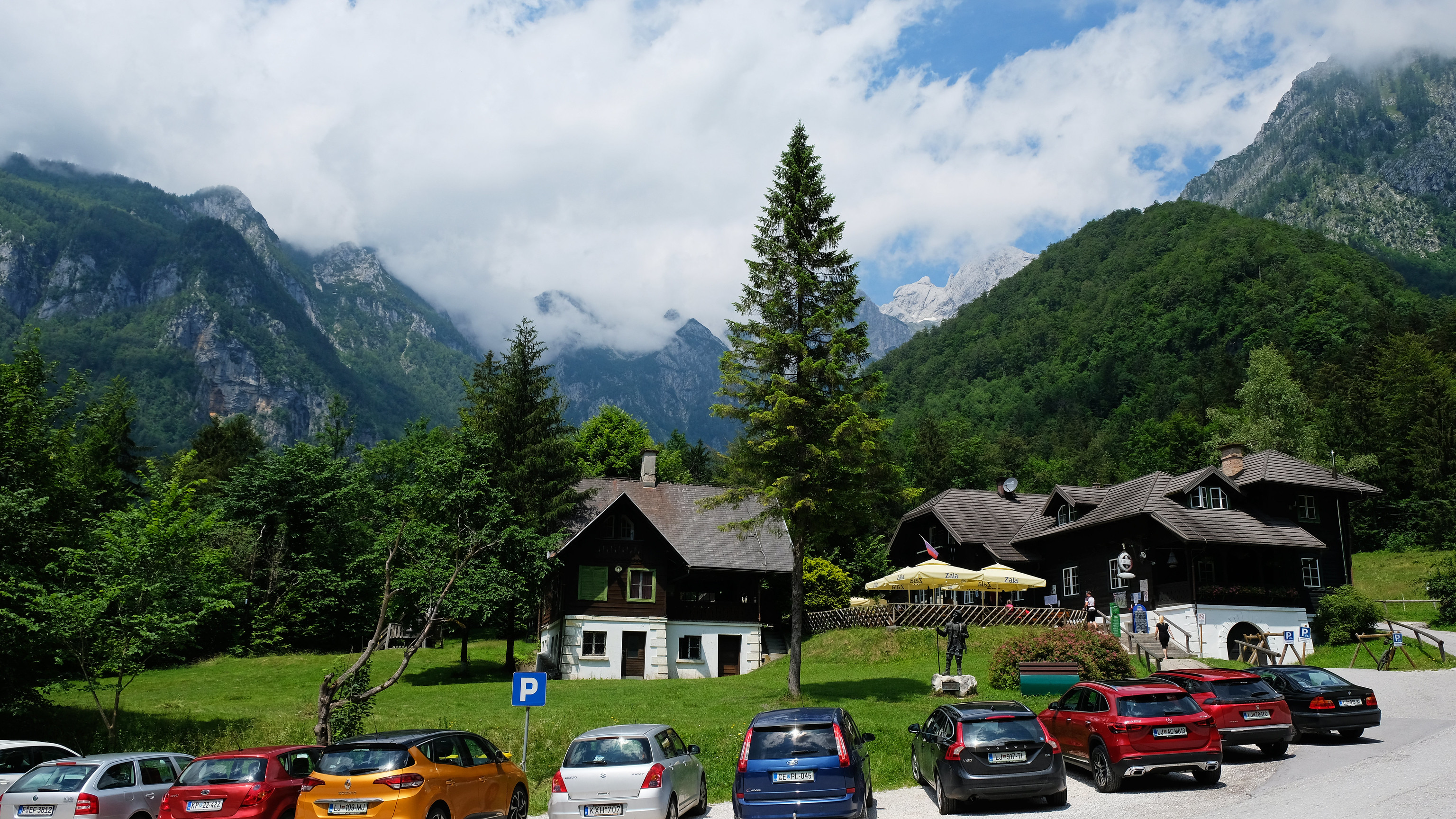 Next to the parking lot, there’s the small lake, and we could walk around it on a dirt path. It’s not a hike, we really only took a closer look at this beautiful spring from different angles, with the peaks of the Kamnik Alps in the background. We couldn’t walk around it all the way either, but we walked until we could in both directions. It took us about 30 minutes, including all the photos taken.

The Kamniška Bistrica river then carves its way out of the valley, and you can choose to follow it – which takes us to the first trail we’d like to show you. 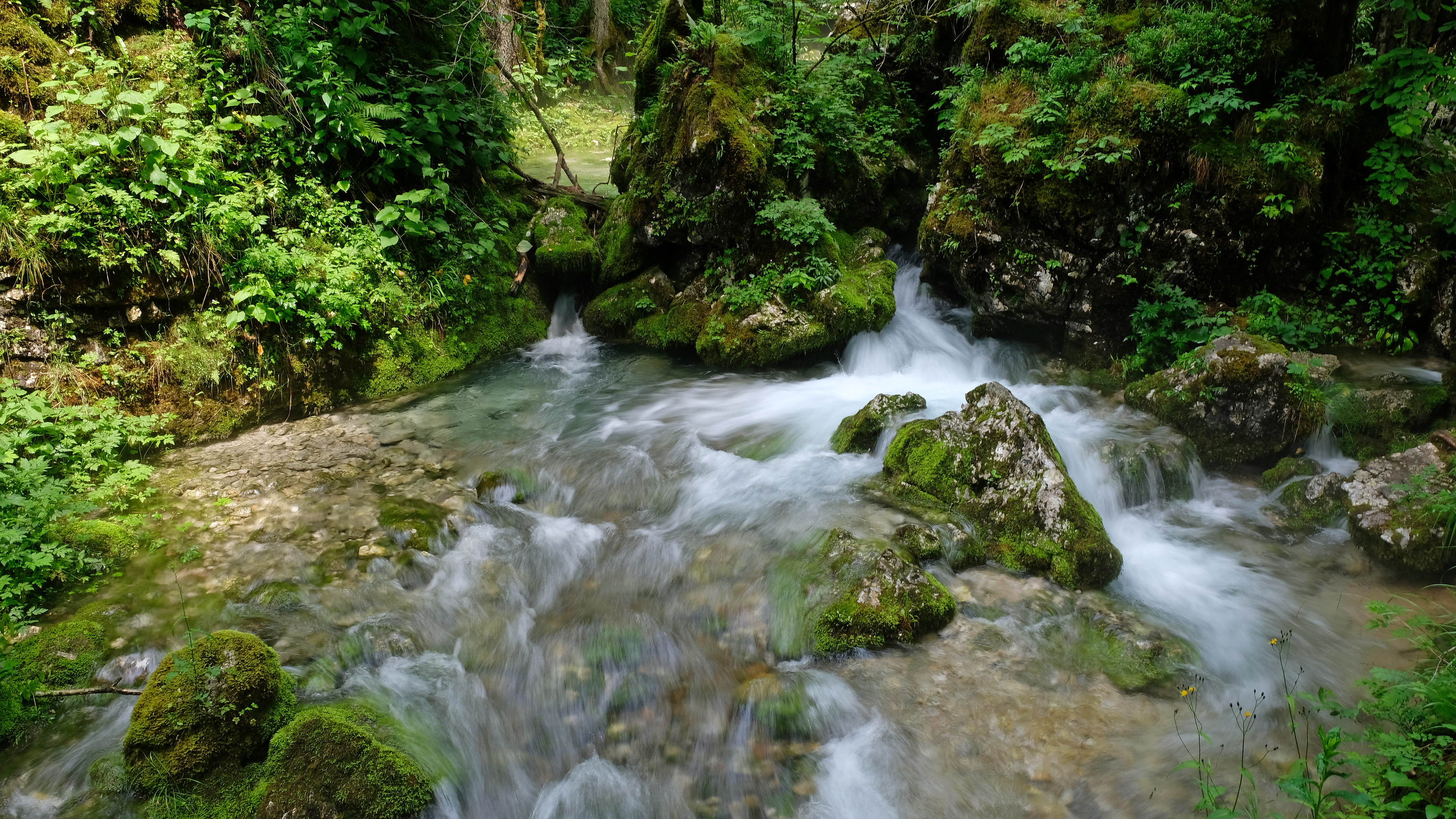 The trail along Kamniška Bistrica river is nice, because it follows this beautiful mountain river closely. There are some ups and downs (mostly downs on the way there, and ups on your way back if you start it from the spring), but it’s a relatively easy trail. However, you need proper shoes, because it’s a real hiking trail, not suitable for strollers or wheelchairs either.

The most amazing section of the river trail is the Predaselj Gorges: Veliki Predoselj and Mali Predoselj. There the river cuts deeply into the surrounding rocks, and you can enjoy the views from several viewpoints, both from bridges and from the shore. The clear blue water wildly emerges from the darkness of the steep and narrow, 30 metres high stone walls and leaves you speechless. (Does Slovenia have the most impressive gorges in all Europe? Rhetorical question. Uhm… Vintgar, Mostnica, Martuljek, Tolmin, Koseč and Predaselj Gorges. Yes, probably it has.) 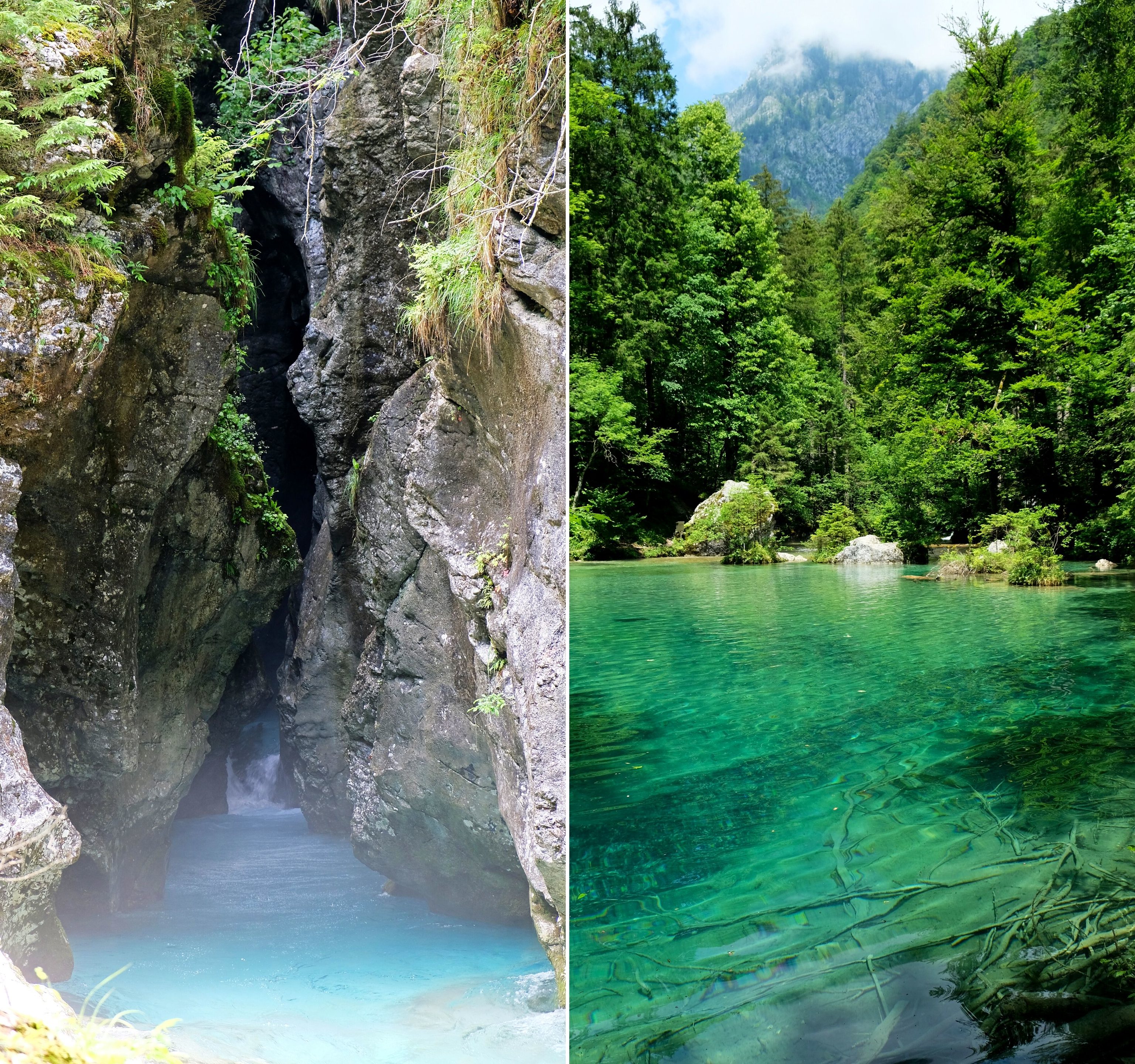 Predaselj Gorges are not far from the Kamniška Bistrica spring, it took us about 30 minutes to reach them. From there we continued the river trail until it was time to turn back. Though the rest was not as impressive as Predaselj Gorges, it was still pretty.

A short addition to the day: Orglice waterfall 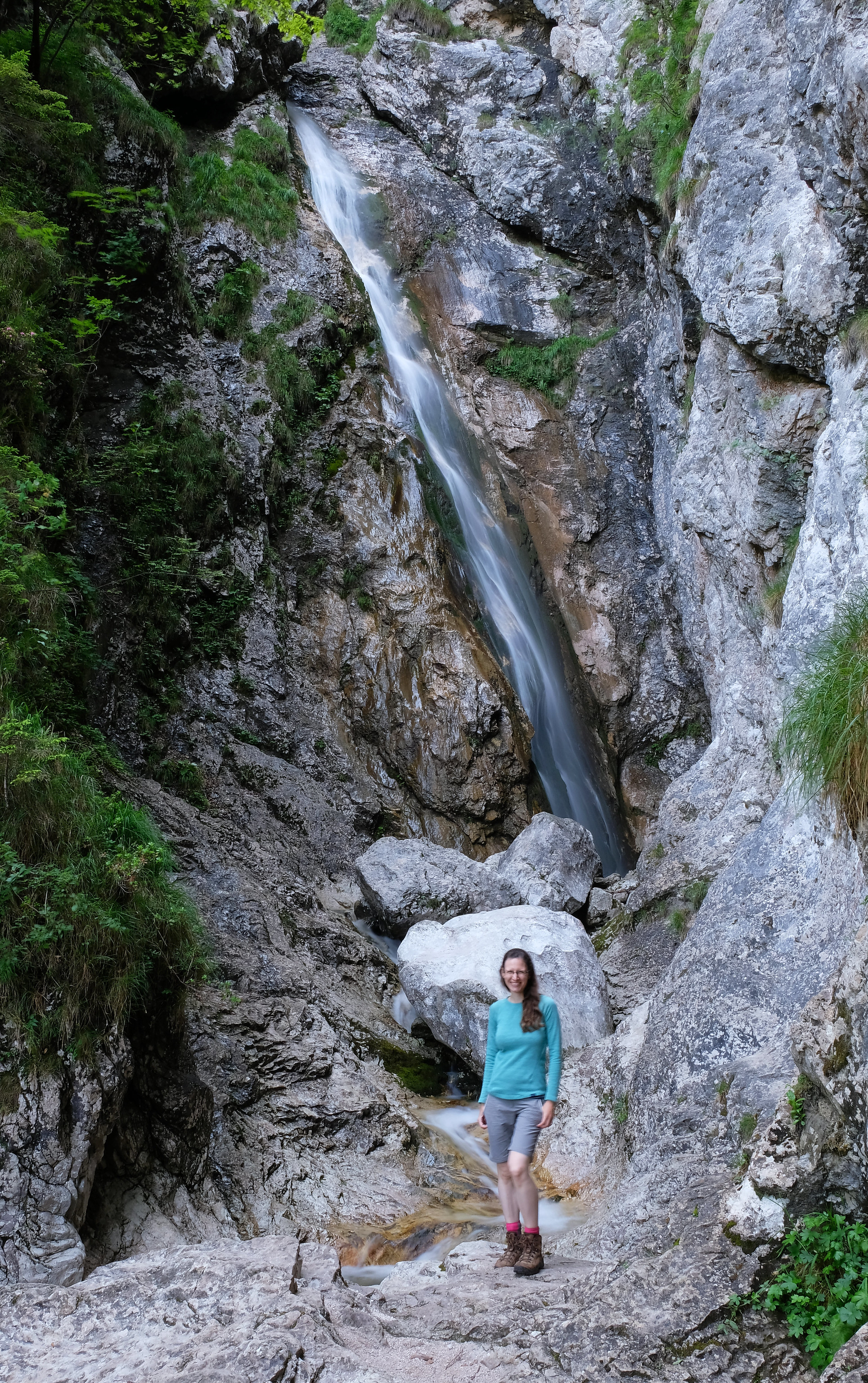 A 1.5-2 hours round-trip hike to Orglice waterfall can be added to any long summer day when you feel you’re not tired enough. This 30 metres high waterfall on Bela creek can be reached in about an hour on an easy forest trail that follows the creek.

If you want to actually see Orglice waterfall, you have to work for it though. The last section of the path that takes you to the viewpoint is quite steep and slippery, and you need to cross the creek on the rocks. It’s not to say it’s hard, it’s only harder than the rest of this easy trail. Families love this hike, and we did it with our baby in the carrier, too. But if you’re not confident taking your kids to the waterfall viewpoint, it’s just a short section at the end, so one of you can take care of the kids (let them play in the rocky pools) while the other goes to have a peek at Orglice waterfall. 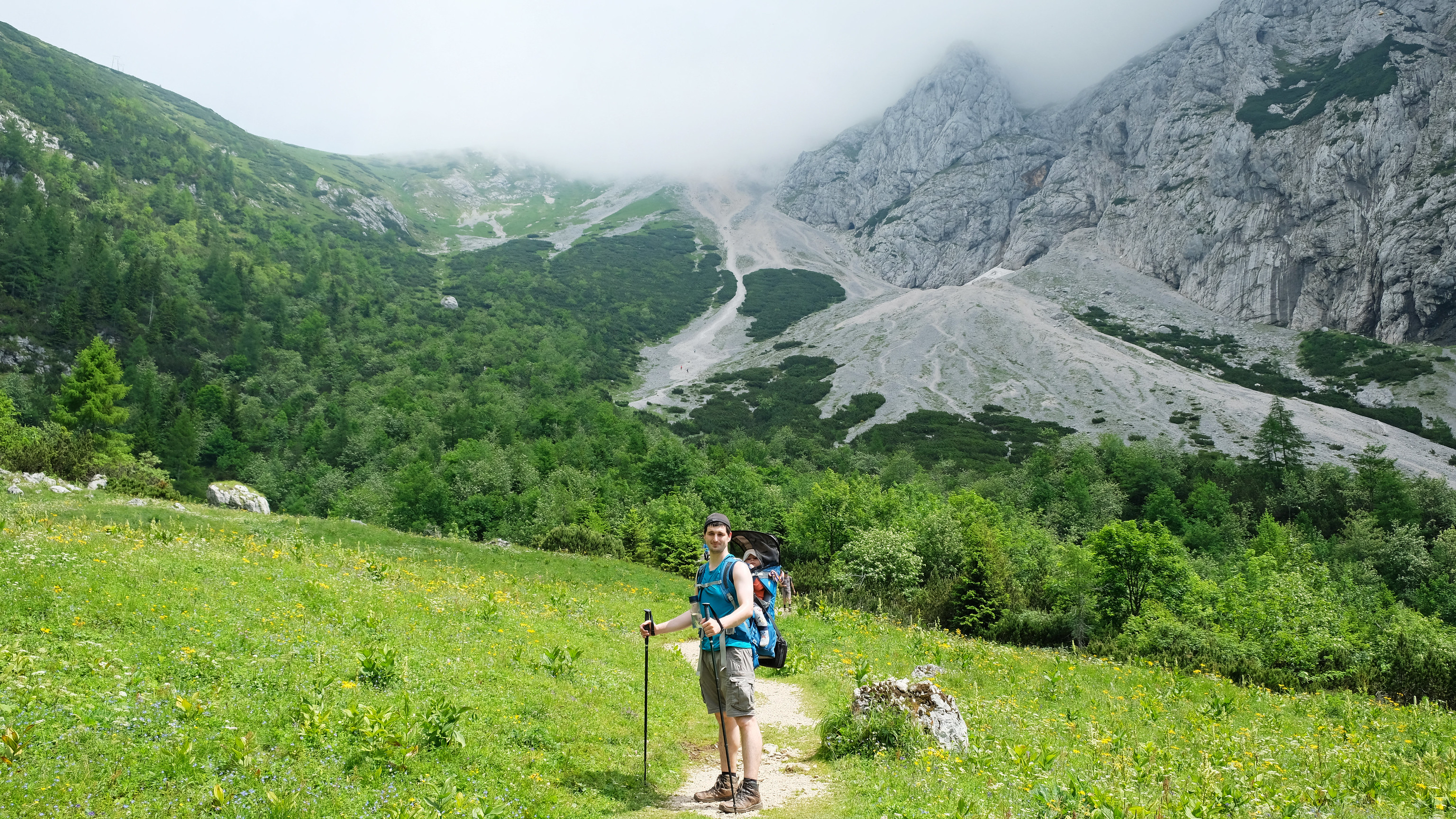 If you’d like to get high and enjoy incredible peak views, the easiest hike you can choose is the full day hike to Kamnik Saddle (and back). That’s not to say it’s an easy hike, but it’s suitable for the average hiker, and even for families. It’s not technical, no chain-supported sections or narrow ridges on the way. We did it with our one year old Tomi in the carrier backpack, and though it was HARD to carry him all the way up, it felt safe. 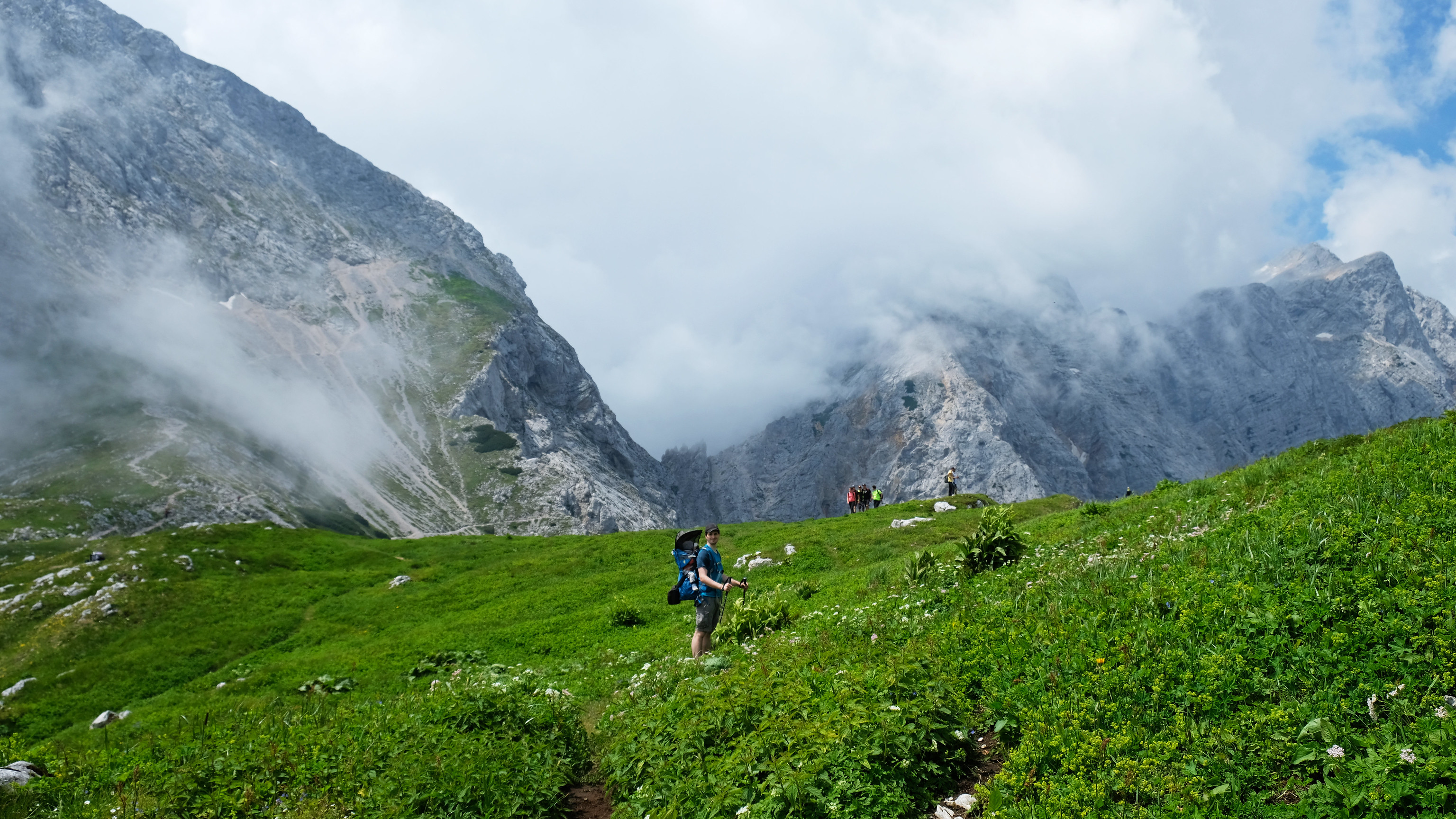 It was a steep trail from the very beginning. First, it ascended in the forest, and it took an hour or two to see the first close peak views. Then trees were replaced with bush, and eventually it was only the lush green grass and some tough alpine flowers – and the large white granite peaks towering above us. The peaks appeared and disappeared from time to time as the clouds moved around, so we only hoped we’d see anything from the saddle.

But the sun was shining as we reached the Kamnik Saddle mountain hut. From there it was only a short uphill walk to get to the saddle and have those views that made every effort worth it. We could see giant peaks in every direction, and Logar Valley lied in front of our feet. Though it was a hot summer day, it was so windy up there that we put on all the pullovers and windbreakers that we had. 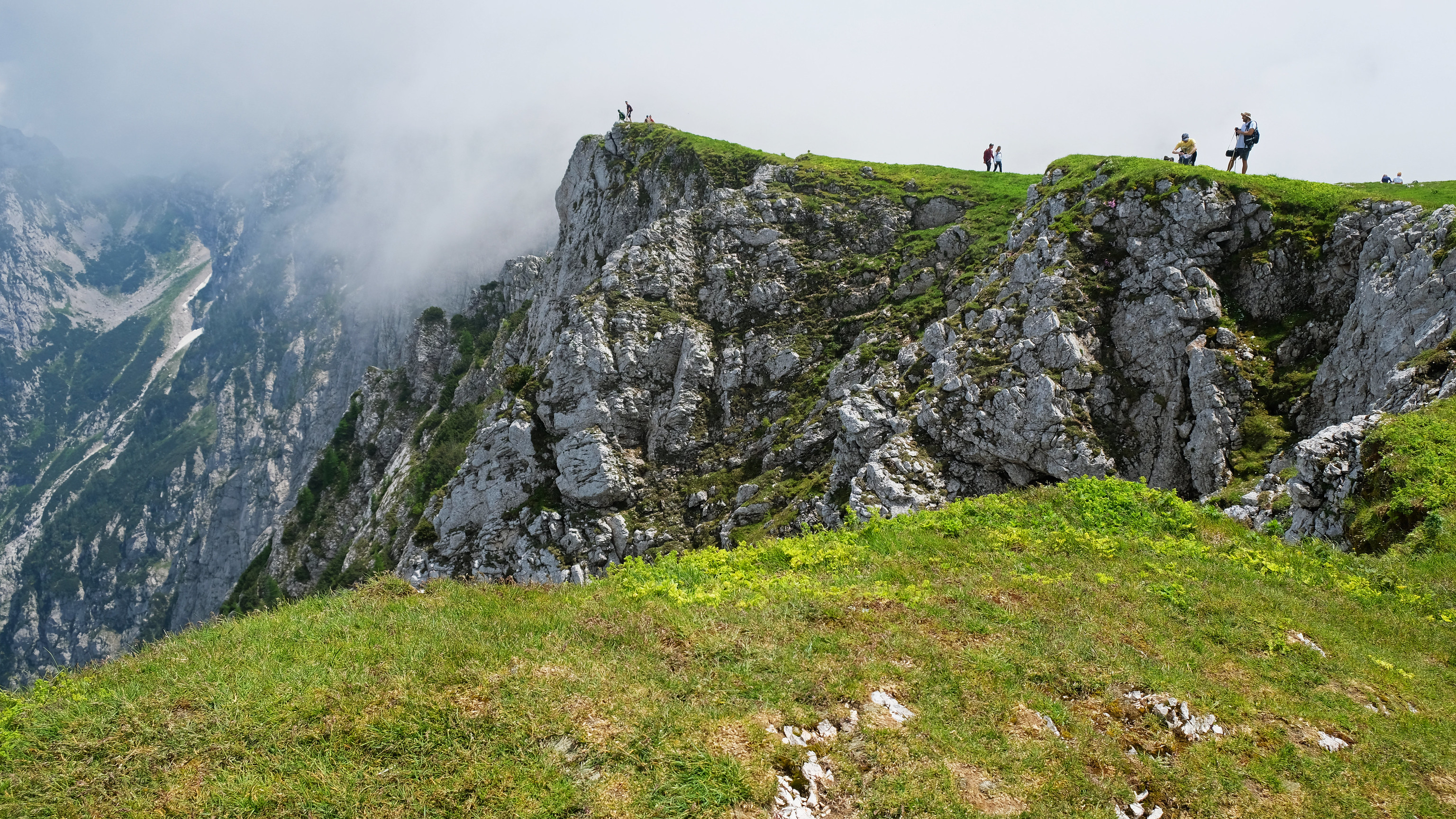 The views from Kamnik Saddle were astonishing, but we only had a short rest up there, mainly because our little boy was scared of the strong, chilly wind that he never experienced in his life before. Lots of hikers continued to further peaks, but we turned back. After leaving the highest, least protected part of the trail behind, we found a beautiful meadow with countless blooming flowers that turned out to be the ideal rest stop for the whole family. We reached the parking lot at Kamniška Bistrica late in the day, tired but satisfied.

Best time to hike in the Kamnik Alps 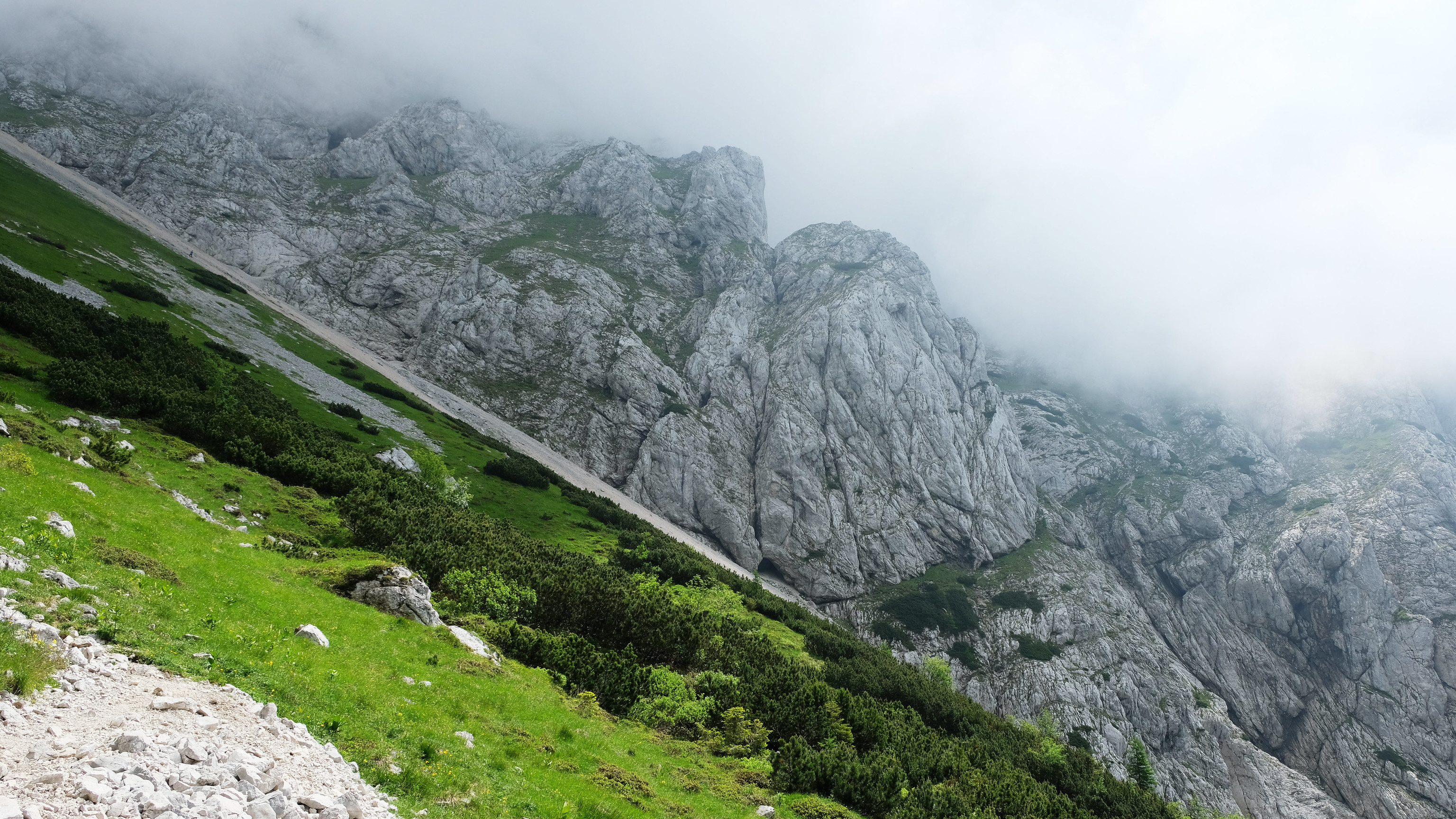 Summer, from June to mid-September. Though the spring of Kamniška Bistrica is accessible year-round, and easy trails like the one to Orglice waterfall can be taken even in winter, most of the trails are inaccessible without special equipment in the cold months.

Even summer doesn’t guarantee good weather, thunderstorms can build up suddenly on hot days. It’s also windy up there at the peaks, so always have some extra layers and a windbreaker, no matter how pleasant and warm it feels at the trailhead.

Stay in Kamnik – and do some sightseeing, too 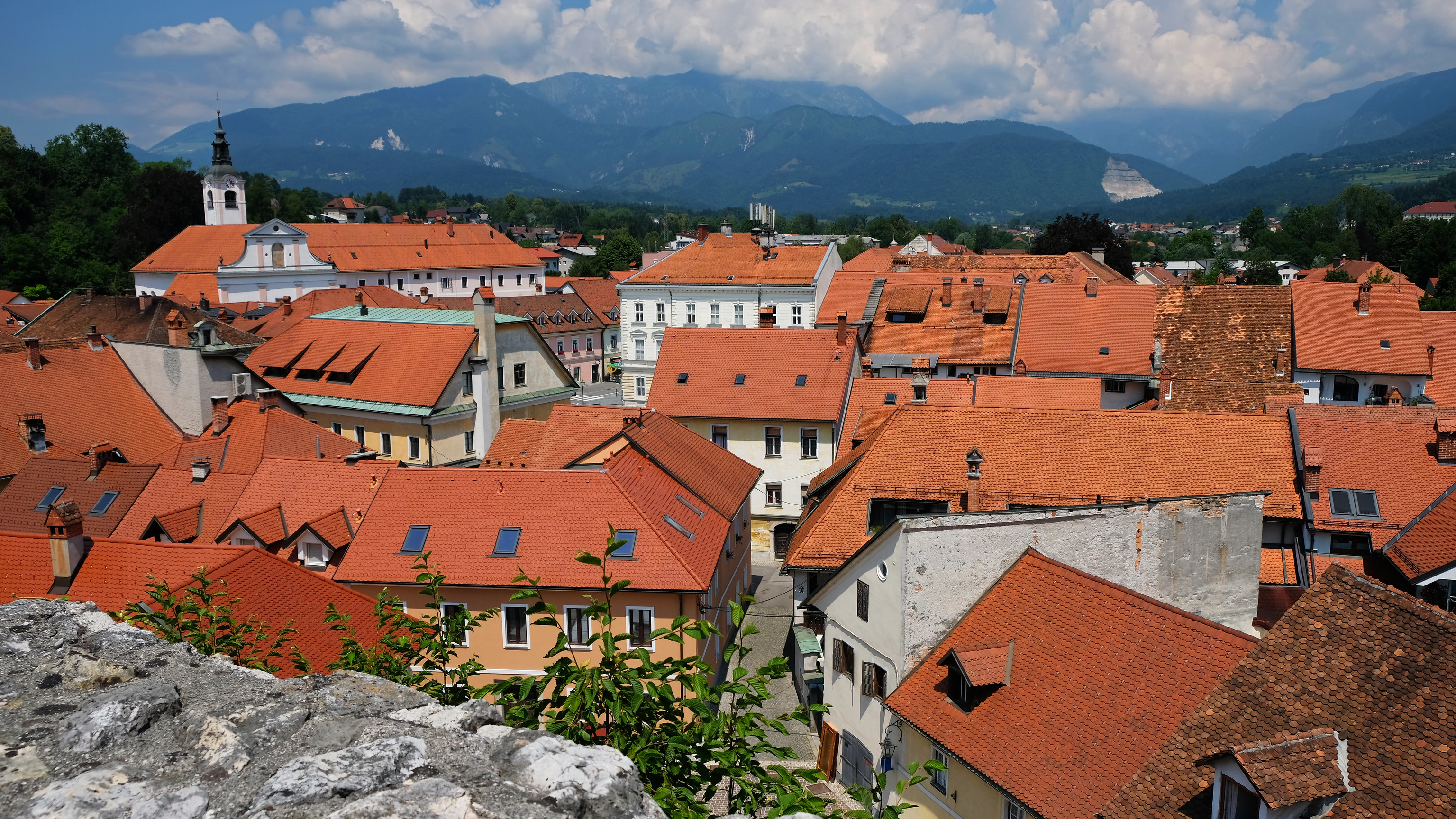 The most straightforward place to stay when you visit the trails at Kamniška Bistrica is the town of Kamnik. Once you’re there, don’t miss walking around in Kamnik’s medieval old town. Walk up to the two castles, Mali grad and Stari grad. We especially liked the views of the red roofs of Kamnik and the Alps from Mali grad. Take a stroll on Šutna street and marvel at the old houses.

Do you have a favorite lesser-known hiking area in the Alps – in Slovenia or elsewhere?