The Best Croatian Cities (Beyond Dubrovnik)

The Best Croatian Cities (Beyond Dubrovnik) Croatia offers just as much in terms of cultural heritage as in natural beauties. The medieval centers of its coastal towns are quite famous – and for a good reason. Are you thinking of Dubrovnik? That’s the busiest and most famous of them – and the one we won’t write about in this post. (We’ve written a guide to help you see the best of Dubrovnik long ago, anyway.) Because it’s time to talk about all the rest – and there are quite a number of cities that are worth a visit, actually, not even only on the coast.

We’ve been to each of them throughout the years, and whatever we write about them is based on our personal experience (just like usual). Our favorite is Rovinj that has an old town we loved just as much as the one in Dubrovnik, then comes Split, Makarska and Zadar, and then the rest. Your preference might be different, and our goal is to help you decide which one you’d like to include in your Croatian itinerary. 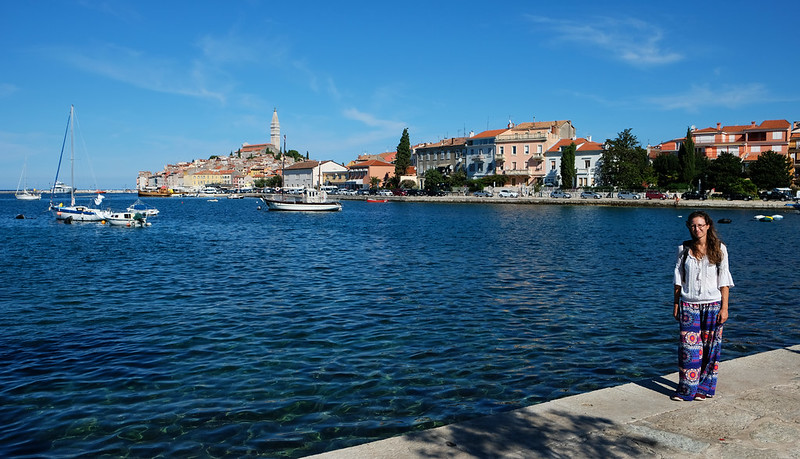 Rovinj is in Istria, a region lesser-known (and less busy) than Dalmatia. Actually, one of the reasons to visit Istria is Rovinj itself, with an intact old town located on a heart-shaped peninsula. As soon as we got our first glimpse of it, walking there from the harbor, we found it stunning (and the harbor is one of the best spots to take pictures with Rovinj Old Town in the background, just sayin’).

Then came all the narrow, cobblestone streets with the pastel houses (and the fresh laundry hanging between them). I couldn’t stop taking pictures, especially that the laundry and the cats lying on the cobblestone streets are my weakness in particular. 😀 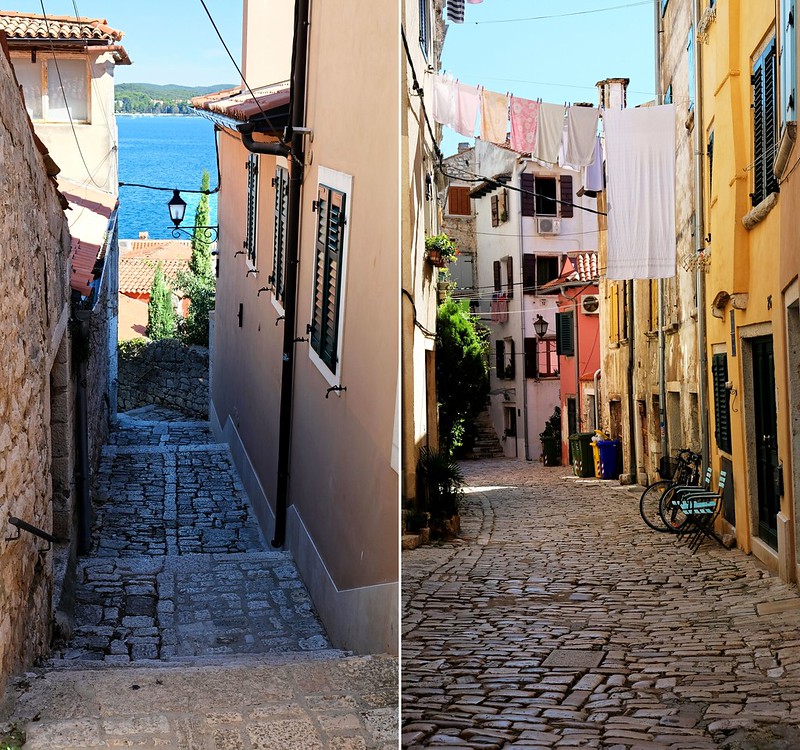 In the middle of the old town lies a square with St. Euphemia Church, and it’s also the highest point of the old town that’s built on a hill. It means lots of stairs and steep uphill sections while you walk, and be sure to have a good pair of walking shoes as cobblestone is so smooth at places that it’s a bit slippery.

You can go up to the bell tower of St. Euphemia Church to have a view of the orange roofs and Rovinj Harbor from above. Then you can walk down to the northern tip of the peninsula where you find a rocky beach right by the seaside promenade.

No cars are allowed into the old town – this is the case for most Croatian old towns as their streets were really not built for cars. But it’s all the better for walkers, nothing can disturb your sentimental wanderings on those fairy tale streets. 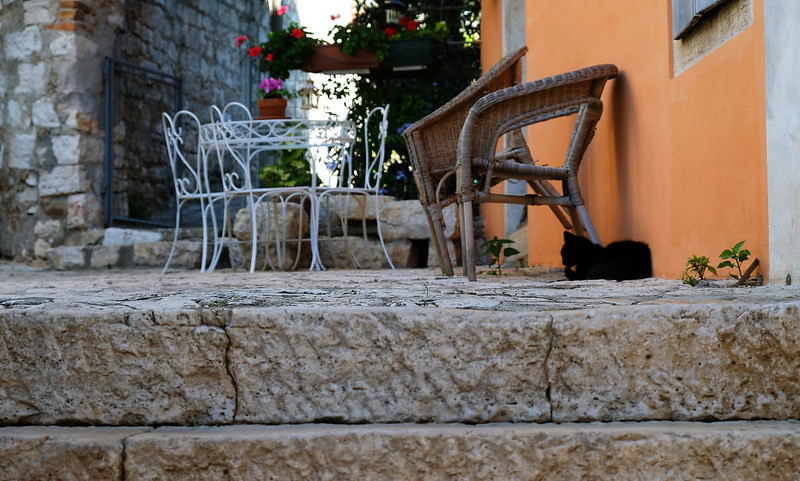 But where to leave your car? We found this guide very useful, it tells you everything about paid and free parking zones in Rovinj.

If you have some time after visiting the old town, go to the Golden Cape (Zlatni rat in Croatian) which has parks and pebbly beaches with views of that fabulous old town. Stay until sunset, and take tons of pictures with the pretty silhouette of Rovinj.

Only about 45 minutes drive from Rovinj, there’s Pula, Istria’s largest city, also famous for its Roman ruins. Where would you think this amphitheater is? 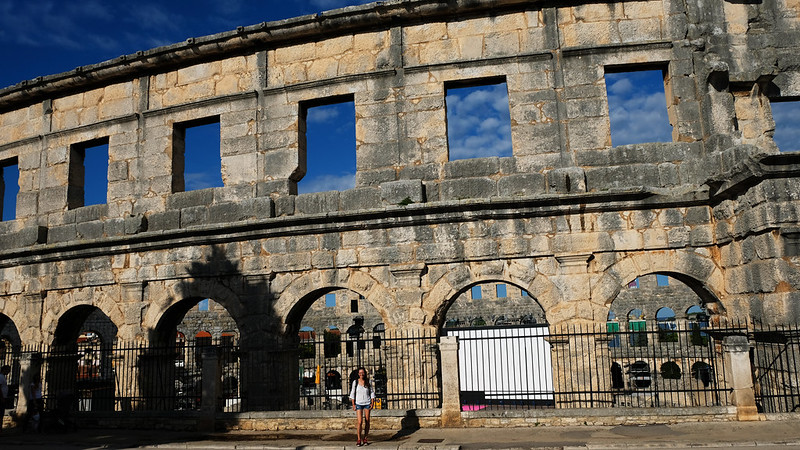 Correct, it’s the Pula Arena. It’s one of the most well-preserved Roman amphitheaters in the world, and the most impressive sight we’ve seen in Pula. Pula is larger than Rovinj, and we found it less pretty. The other Roman ruins, like the Forum, the Arch of Sergius or the Temple of Augustus are nice, and there are a couple of lovely walking streets, but it doesn’t have such an intact old town as Rovinj. 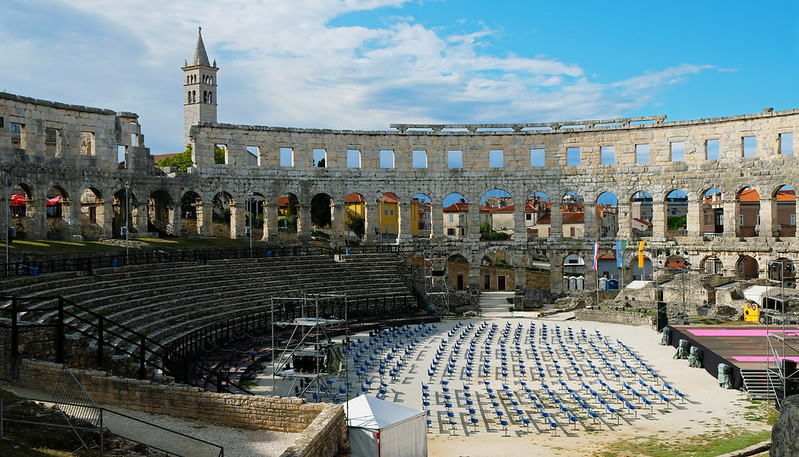 Half a day was enough for us to see everything we wanted in Pula, then we spent the afternoon on Hawaiian Cove Beach. Technically, it’s also in Pula, but it doesn’t feel like it. It’s located at the tip of Verudela Peninsula which is further from Pula’s center. Surrounded by Hotel Park Plaza, pine forests and other coves, we didn’t feel like being in a city at all. And Hawaiian Cove Beach offers clear, magically turquoise water! It’s not a large beach though, it can easily get crowded in the summer. 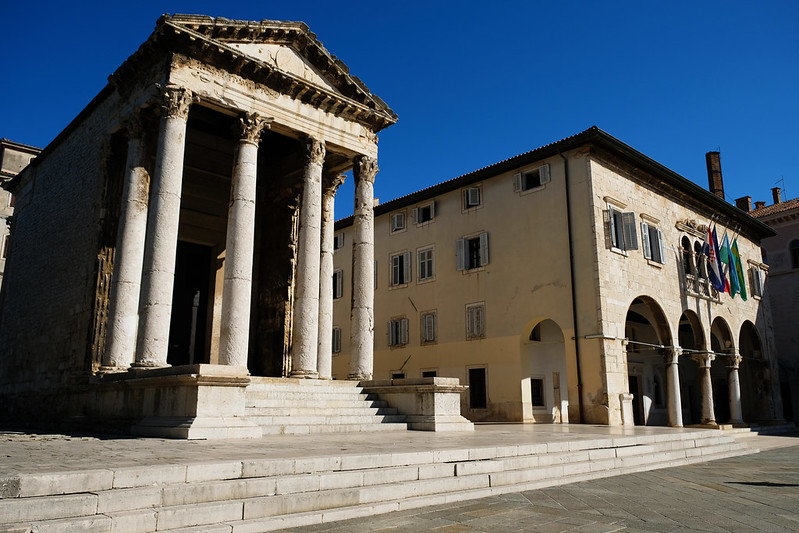 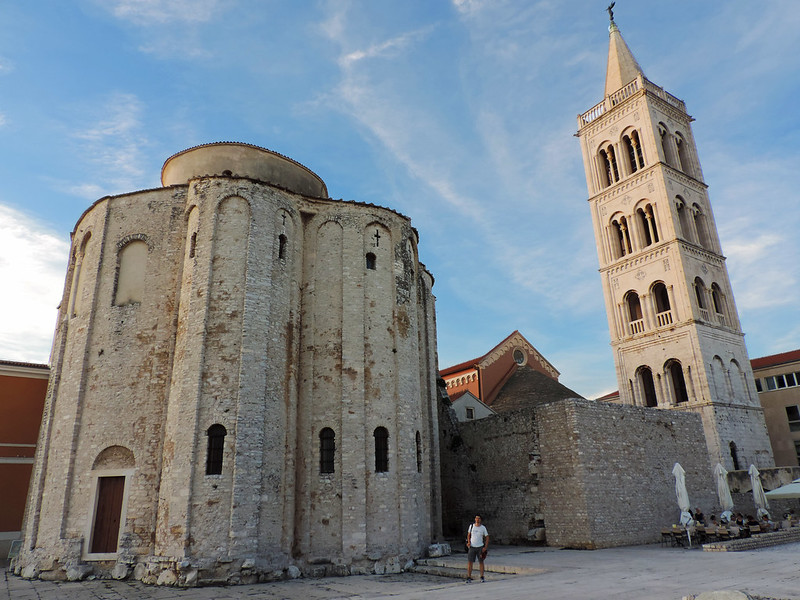 Some cities don’t impress with world-famous sights and giant museums, they don’t have such a long list of must-sees. They’re not even that big. Still they’re loveable as is, we just enjoy walking around them, sitting on a bench somewhere and taking in the simple pleasures of life, like a light chitchat or a tasty ice-cream. Zadar is one of these cities.

Its old town is separated from the modern Zadar, it’s on a small peninsula that feels like another world, some centuries ago. Roman and Venetian ruins, cute cafes and restaurants make it charming, wherever you walk. The Roman Forum and the pre-Romanesque Church of St. Donatus are among its oldest ruins, and the Romanesque St. Anastasia’s Cathedral is the largest one in Dalmatia. The seaside promenade faces west which makes it an ideal place for sunset strolls.

Read our sightseeing guide to Zadar!

As for parking, it’s the usual: leave your car outside of the old town as that’s car-free. 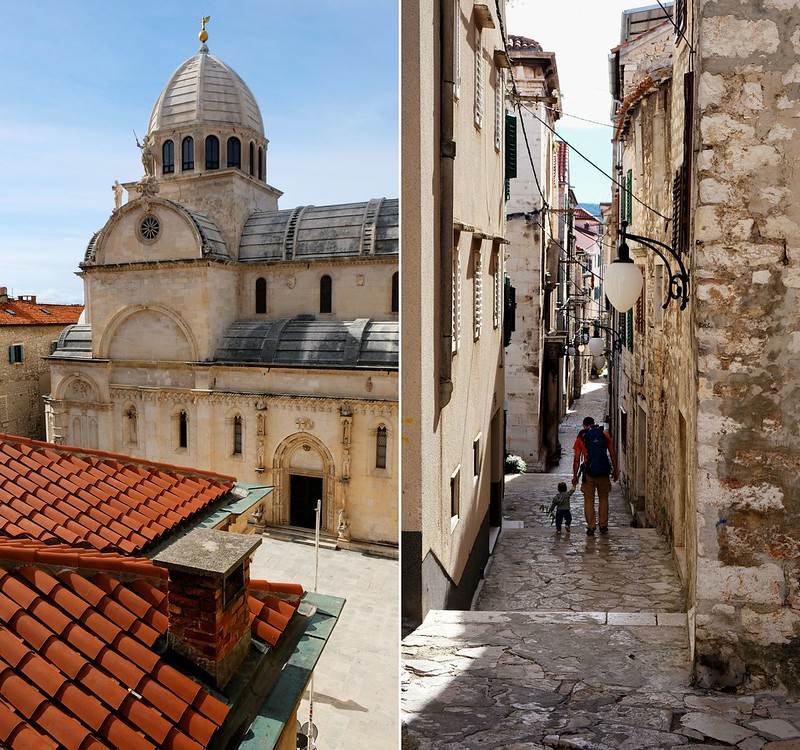 Šibenik is just an hour drive from Zadar, and it’s one of our new discoveries. We’ve actually stopped there only for a few hours to stretch our legs on the way home from Makarska to Hungary (and to give our one year old boy a break from sitting in the car, because he needed it badly). It turned out, a few hours is enough to walk around in the old town. If we’d have had half a day, we might have time to visit one of the fortresses.

Šibenik is the oldest town on the Adriatic coast. Our favorite place there was Republike Hrvatske Square with giant St. James’ Cathedral, an impressive Renaissance building and a UNESCO World Heritage Site. We enjoyed exploring the cobbled streets surrounding it.

But Šibenik has a second UNESCO Site, too: the Fortress of St. Nicholas. Further from the old town and the harbor, this triangular-shaped stone fortress is only connected to the mainland by a narrow walkway. You can also get there by boat.

St. Michael’s Fortress is located on top of a hill above the old town. And believe it or not, Šibenik is not out of fortresses yet. The third one is St. John’s fortress where some of the Game of Thrones scenes were filmed.

To no one’s surprise, the old town is car-free. We parked our car on one of the streets behind the harbor – these are normally paid parking spots, but it was free on Sunday (and it was already fall, after high season). 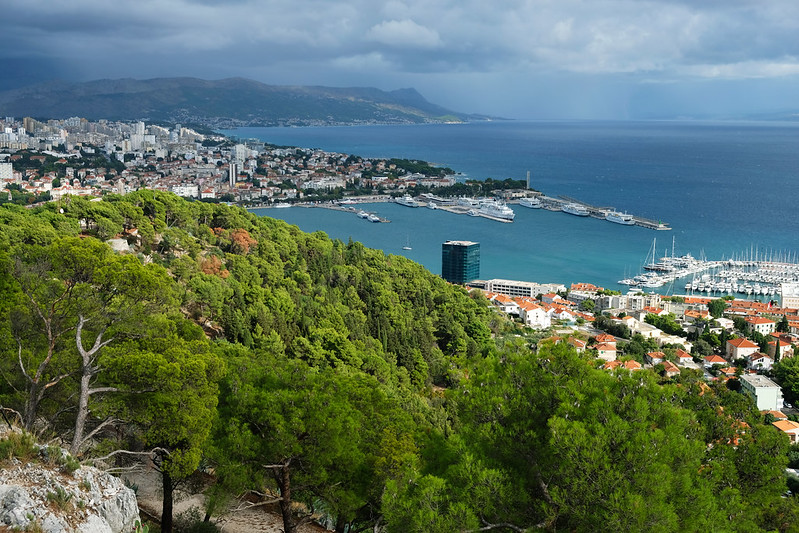 Split is the second largest city in Croatia, with an old town almost as stunning as the one in Dubrovnik or Rovinj. It was funded by the Greeks around the 2nd or 3rd century before Christ. The Roman Palace of Emperor Diocletian is in the center of the old town, and it’s one of the oldest structures in Split, built roughly 1700 years ago! (It’s also a Game of Thrones filming location.)

We walked up to the tower of Diocletian’s Palace for a great panorama of Split, the surrounding mountains and the coastline. The narrow cobblestone streets inside the old city walls are very picturesque (you know, laundry and cats, and all that), and it was so easy to get lost and spend hours walking there. 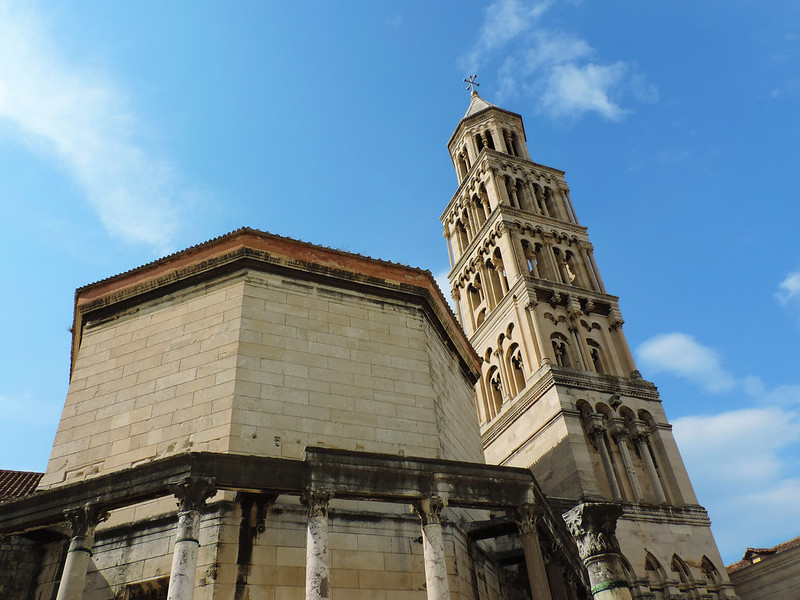 Riva, a lovely Mediterranean seafront promenade with palm trees, benches, tempting cafes and ice cream stands is just outside of the old town walls. Walking all the way to the harbor, we could admire the huge ships and glamorous yachts.

Oh, are you asking about parking? Of course, you have to leave your car outside of the old town. We parked near the ACI Marina for free, and from there it took about 15 minutes to walk to the old town. 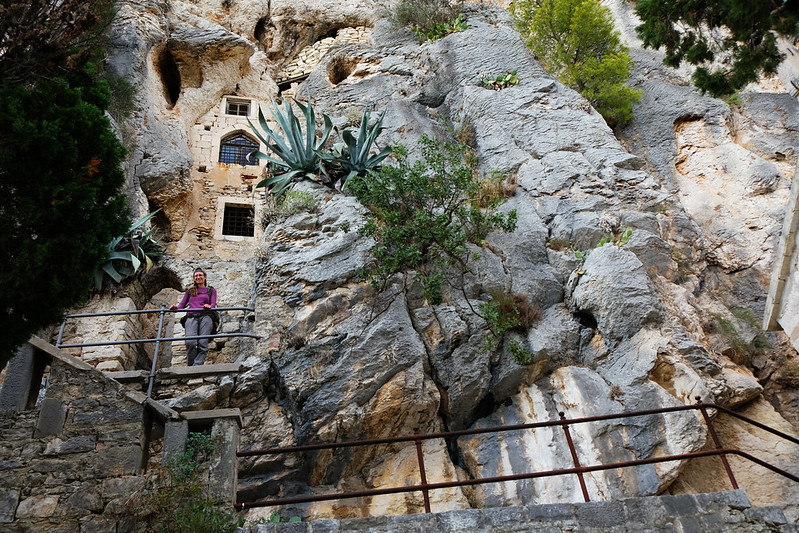 There’s one place which is further from Split’s old town and harbor, but is worth a visit if you’re looking for nice beaches and coastal scenery: Marjan Hill. Marjan Forest Park is a recreational area where cars are not allowed, but plenty of beaches, viewpoints and walking trails spoil nature lovers. Oh, and some hermit caves carved into a majestic rock wall. Some beaches, like Kasjuni and Kastelet beaches, can be accessed by car, and we liked them much more than Bačvice Beach near the city center. If you like the coastal walks and the beaches, Marjan Hill itself can take a full day (yes, we’re speaking from experience). 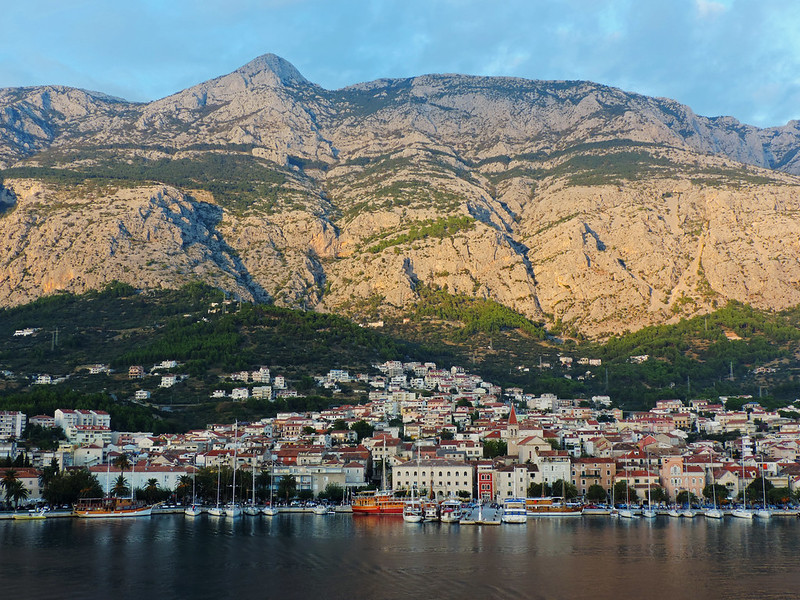 Makarska is among our favorite Croatian cities, but not because of its old town. Though it has one, averagely attractive (which means quite attractive, just not the most special by the Croatian standard). The center of it is Kačić Square, dominated by St Mark’s Church and views of the towering cliffs of Biokovo in the background.

But Makarska is also home to fabulous beaches, one of the nicest seafront promenades in Croatia, tons of restaurants and bars with sea views and a lively harbor. It’s the center of the riviera named after it, and it deserves to be. Though you better avoid it in the high season, we fell head over heels for Makarska in the fall. 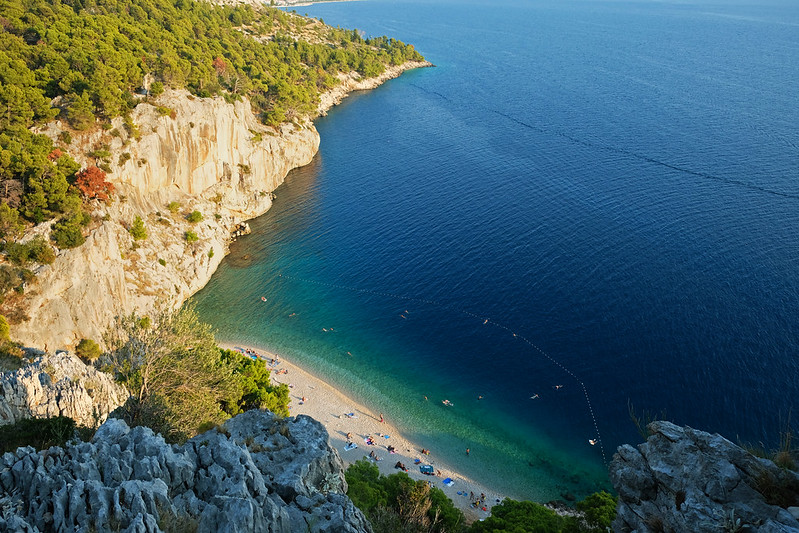 Makarska and the whole Makarska Riviera is dominated by the fascinating views of Biokovo in the background. With countless boat excursions taking off from Makarska’s harbor, with amazing coastal trails and hidden bays waiting to be found everywhere on the Makarska Riviera, a full week easily flies by here. 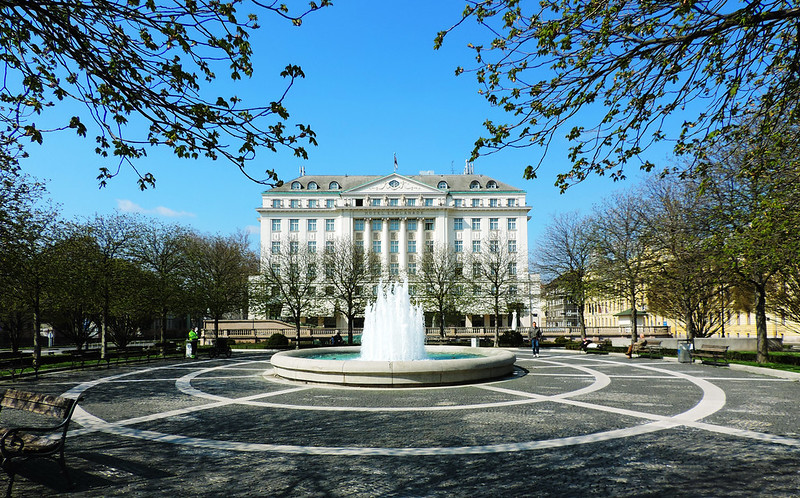 Let’s leave the coast now, and take a look at Croatia’s capital. Zagreb is one of the small European capitals, but it’s surprisingly attractive and not at all busy. It has a picturesque medieval core, nice parks and an unusual museum that we liked very much. One day is enough to see its main sights, so you can easily add it to the beginning or the end of your Croatian itinerary, especially if your flight arrives in Zagreb.

Zagreb’s Christmas Markets were also voted one of the best ones in Europe in the past years, so it could be a great stop on a Central European Christmas road trip, as well.

Read our sightseeing guide to Zagreb! 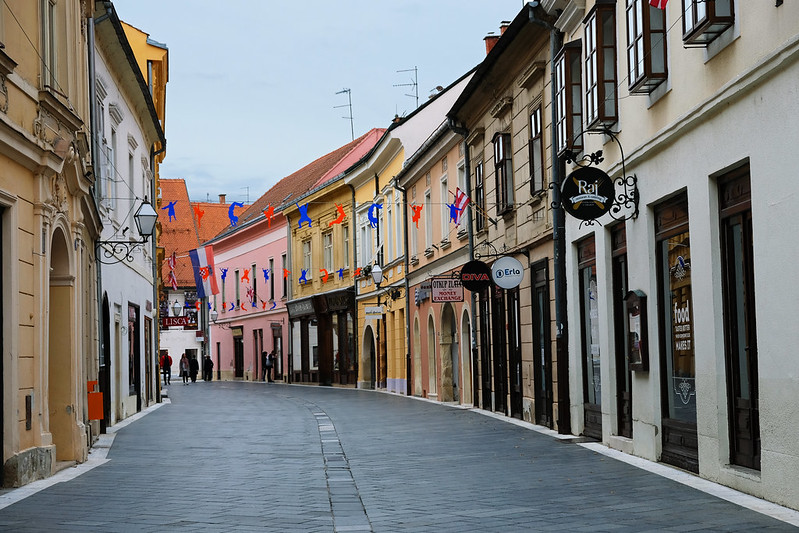 Very different from the coastal old towns, the Baroque beauty of the city center of barely known Varaždin shows another face of Croatia. We added it to the end of our trip in Croatia on a whim, and it exceeded our expectations. 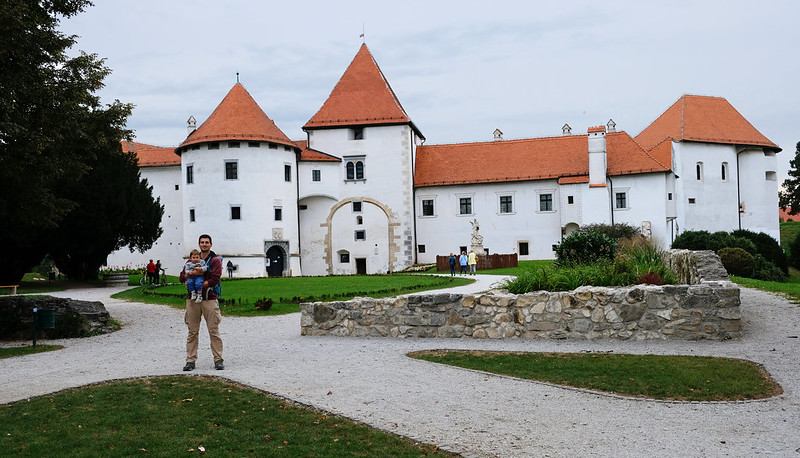 It’s full of history and amazing Baroque architecture! Just find Varaždin Castle, Miljenka Stančića Square, Franjevački Square and the Town Hall, and you can have a nice walk in the city center while you get to each of them.

Read our sightseeing guide to Varaždin!

Do you have a favorite city in Croatia?