Our 8 Favorite Castles In Czechia

Our 8 Favorite Castles In Czechia Our favorite country to visit romantic castles in Central Europe? Czechia. We explored different regions of this beautiful country in the past years, and they surprised us with well-preserved old towns and unique castles. Let’s talk about them now.

From the 13th to the 19th century, kings and queens, princes, princesses, knights, bishops, archbishops and noble families shaped these majestic buildings, and filled them with stories of love and scandals, secrets, alliance and treachery. Even though lots of castles in Central Europe suffered serious damages in the World Wars and in the following communistic nationalization, these amazing Czech castles were preserved or restored. 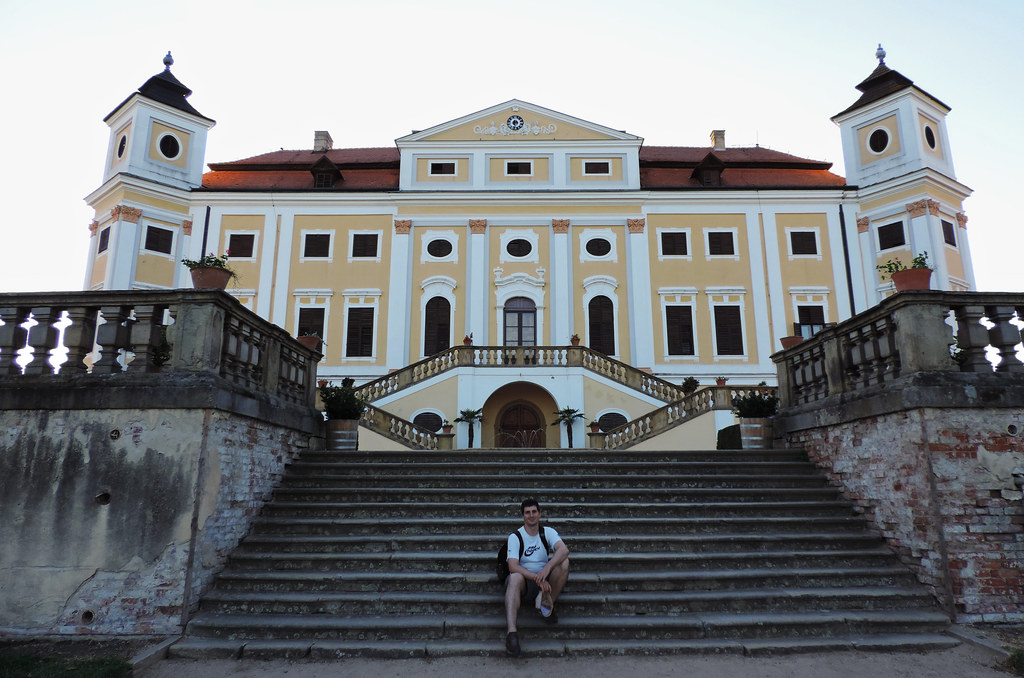 Most of them can only be visited with a guided tour that’s usually only in Czech. However, we could at least ask for textbooks in English. It’s not nearly the same as an enthusiastic guide, but the interiors were impressive enough on their own, anyway.

Prague Castle, the most well-known one 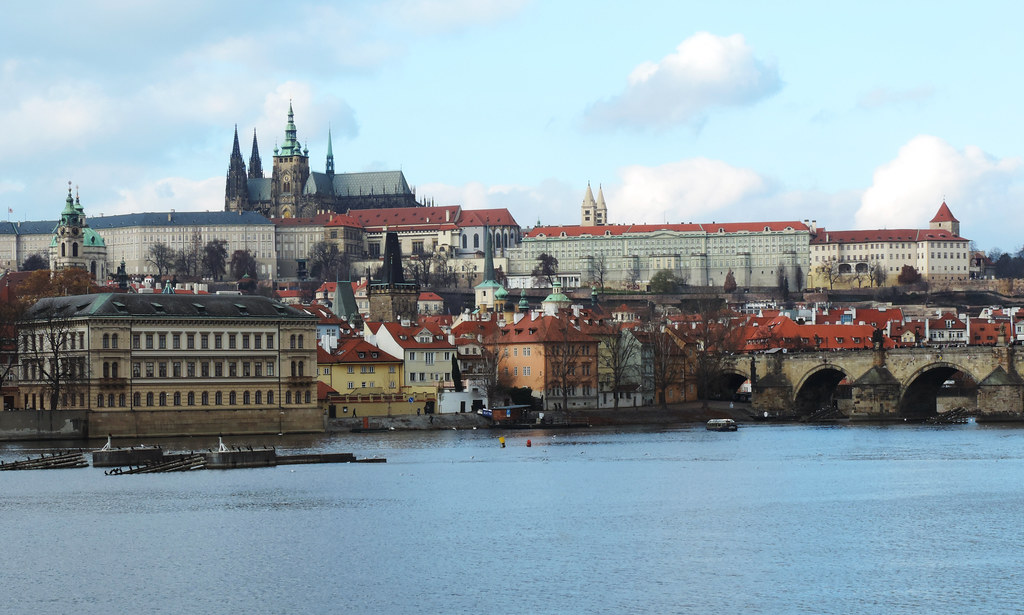 The most famous Czech castle. The busiest, as well. Built in the 9th century, it was the seat of the kings of Bohemia, Holy Roman emperors, and presidents of Czechoslovakia. Today the office of the President of the Czech Republic is located in Prague Castle.

The castle is large – it’s the largest ancient castle complex in the world! Most of the castle buildings are open to tourists, and they represent a wide range of architectural styles. Our favorites were Gothic St Vitus Cathedral, the Old Royal Palace and the Golden Lane with its tiny, old houses. We also enjoyed exploring the several gardens and viewing terraces that surround the castle.

If you really want to see everything, you better plan a full day for it. Needless to say, it’s absolutely worth it. 🙂 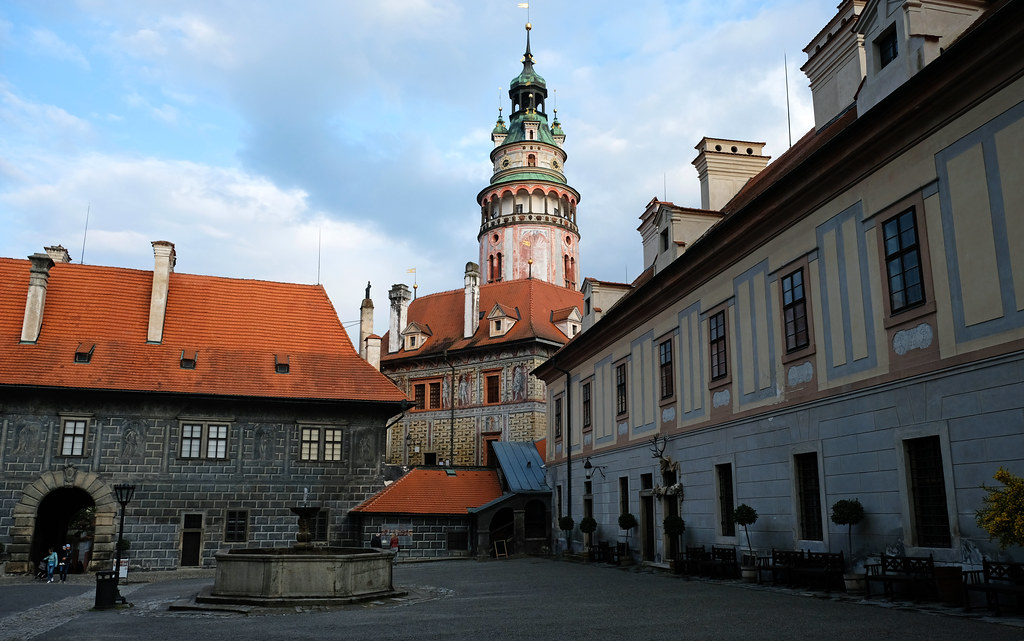 13th-century Český Krumlov Castle towers proudly above our favorite European old town: Český Krumlov. Its viewing terraces offer great panorama above the red roofs, cobbled streets and medieval houses of Český Krumlov, and also above Vltava River with its sharp curves. No wonder that we fell for this castle even before we saw its courtyards or interior.

But the time came for that, as well. We signed up for an English tour of the Renaissance and Baroque interiors that were shaped by several noble families throughout the centuries. In the end we liked Český Krumlov Castle even more than famous Prague Castle. 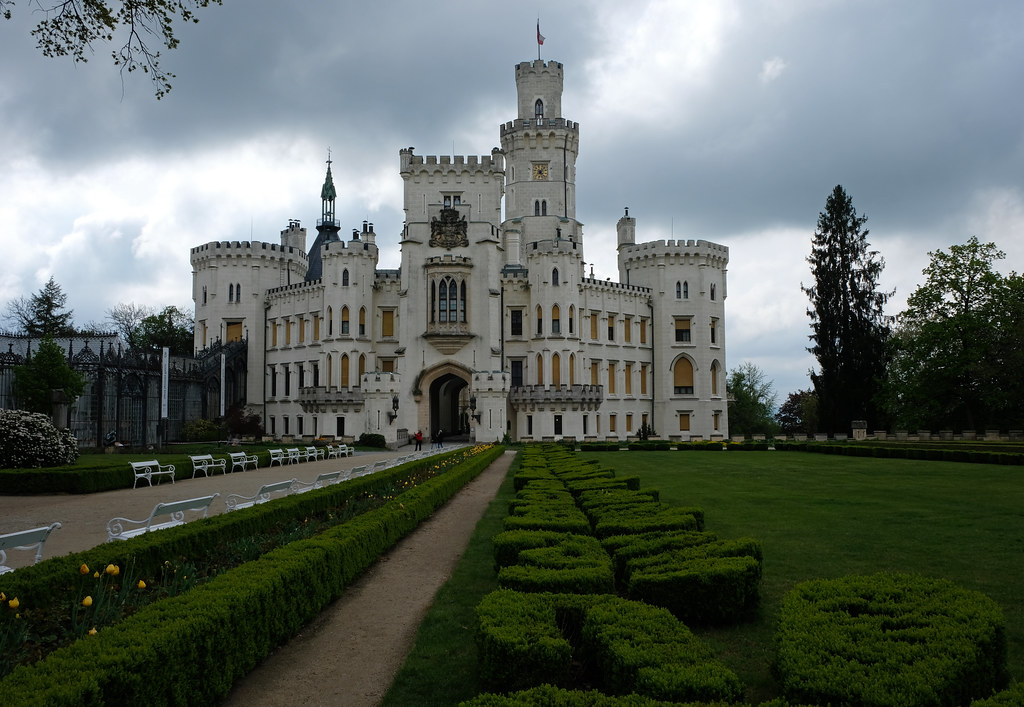 While the castles of Prague and Český Krumlov are the most significant historical castles in Czechia, Hluboká was the one that reminded us of fairy tales and princesses.

This pretty Neo-Gothic jewel reached its current appearance during a reconstruction in the 19th century. It was the time when everyone wanted to build castles in romantic style. In this case the job was very well done. 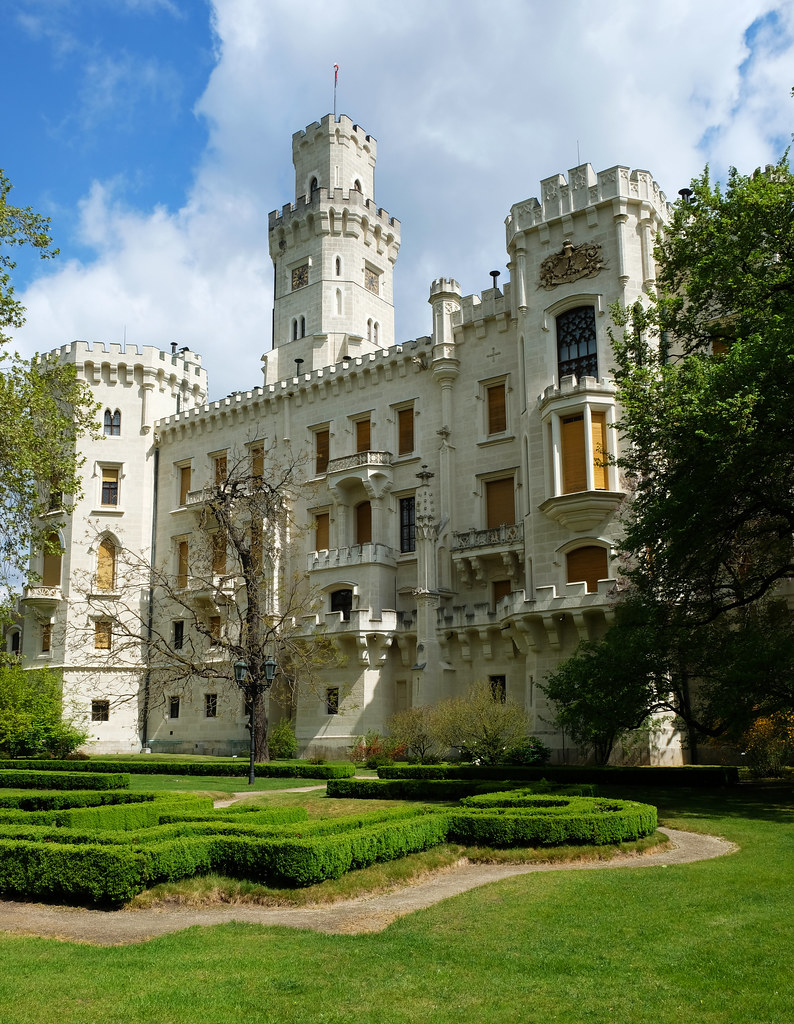 Hluboká Castle is grand. It has 140 rooms and 11 towers. We were truly amazed by its representative rooms with lavish decoration, fine woodworks, elegant furnishings and chandeliers. The tour of the private apartments was also interesting, even though they are less magnificent. Well, they were built for living and not just making the neighbors jealous.

Hluboká’s last owner, Adolph Schwarzenberg emigrated overseas to escape from the Nazis. Not such a romantic ending. But today the castle is open for visitors, and there’s an embarassing number of interior tours to choose from. 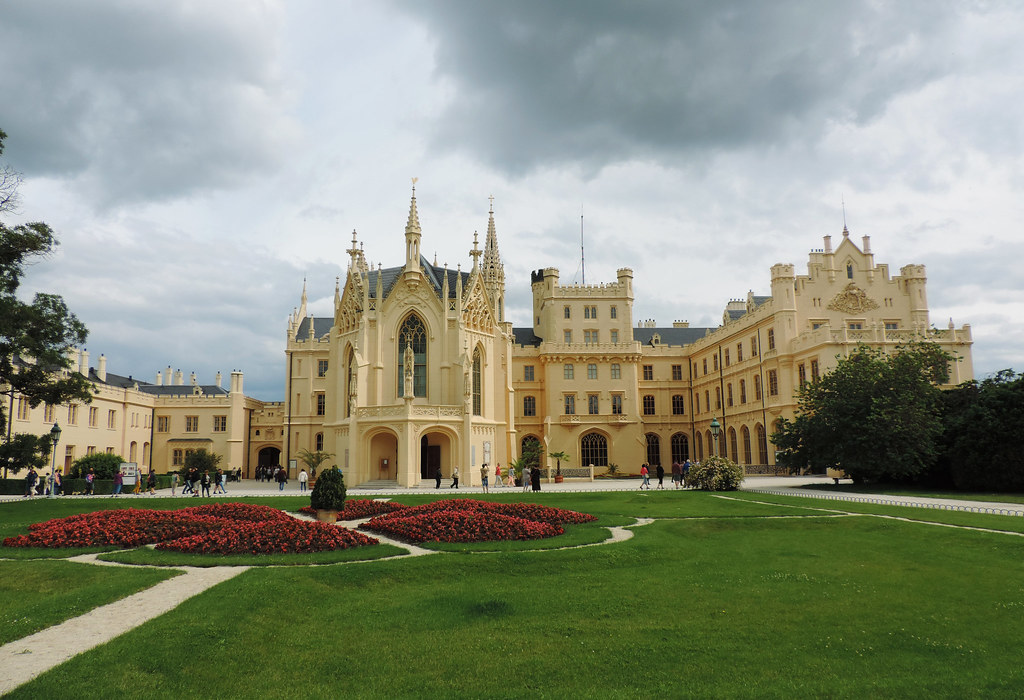 Lednice is another breathtaking Neo-Gothic castle from a lesser known region of Czechia: Moravia. I might sound like a broken record if I call it a fairy tale castle, but honestly, it’s a match for Hluboká. We couldn’t even decide which one we liked better, we were happy to visit both. 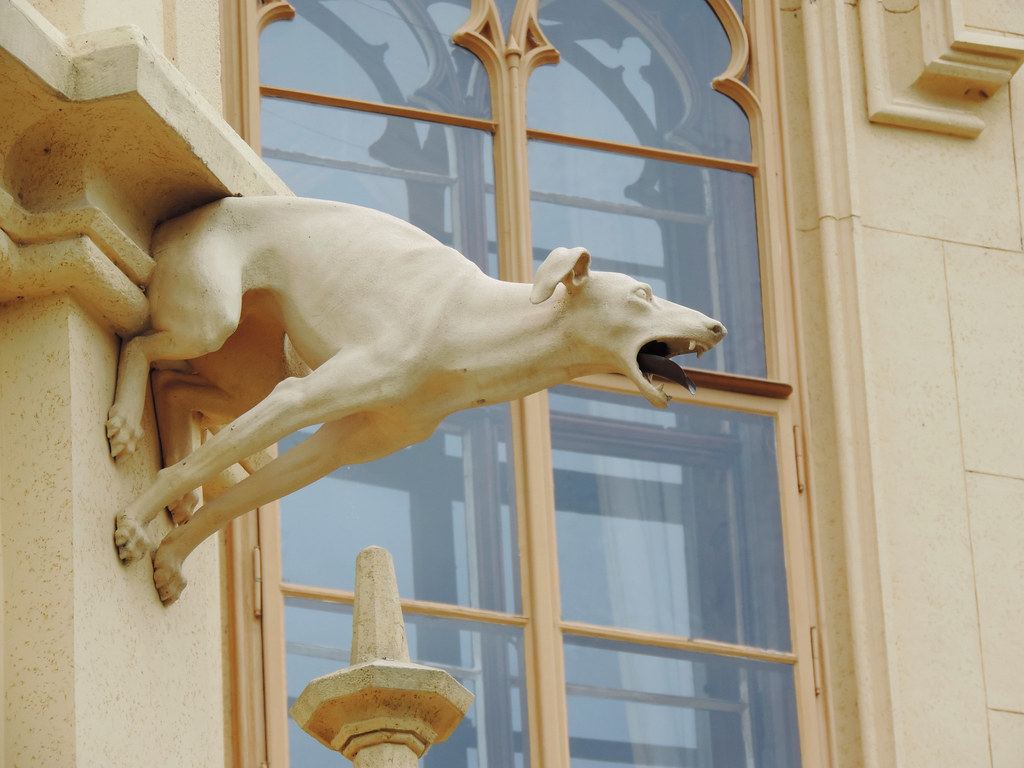 We signed up for both interior tours in Lednice. The Princely Apartments were elegant, and we especially liked the Chinese cabinet. The highlight was the tour of the Representative Rooms though. Each of them was stunning, with fine furniture, woodwork, glasswork and vibrant colors. Our favorites were the Turquoise Room, the Red Room, the ballroom and the library. Oh, old libraries have such a special charm, don’t you think?

Read more about our visit to Lednice Castle here!

Bouzov Castle, the seat of the Teutonic Knights 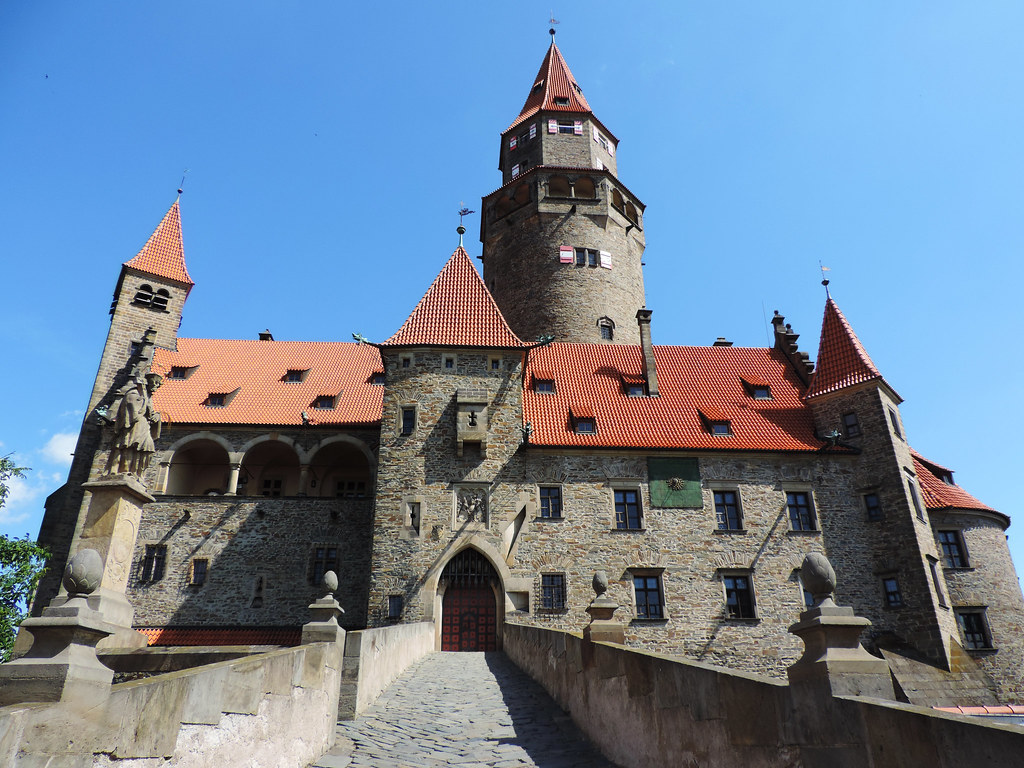 Bouzov Castle is not the castle of princesses, it’s the castle of knights. It’s also built in Neo-Gothic style though – meaning, it looks so romantic…

Unlike most of the castles that are called zámek in Czech, Bouzov is called hrad, because it’s rather a fortress than a castle. And unlike other medieval castles, Bouzov has never gone to ruin. That’s why we found it so special: it was our first time walking around in a fully furnished medieval castle.

Read more about our visit to Bouzov Castle here! 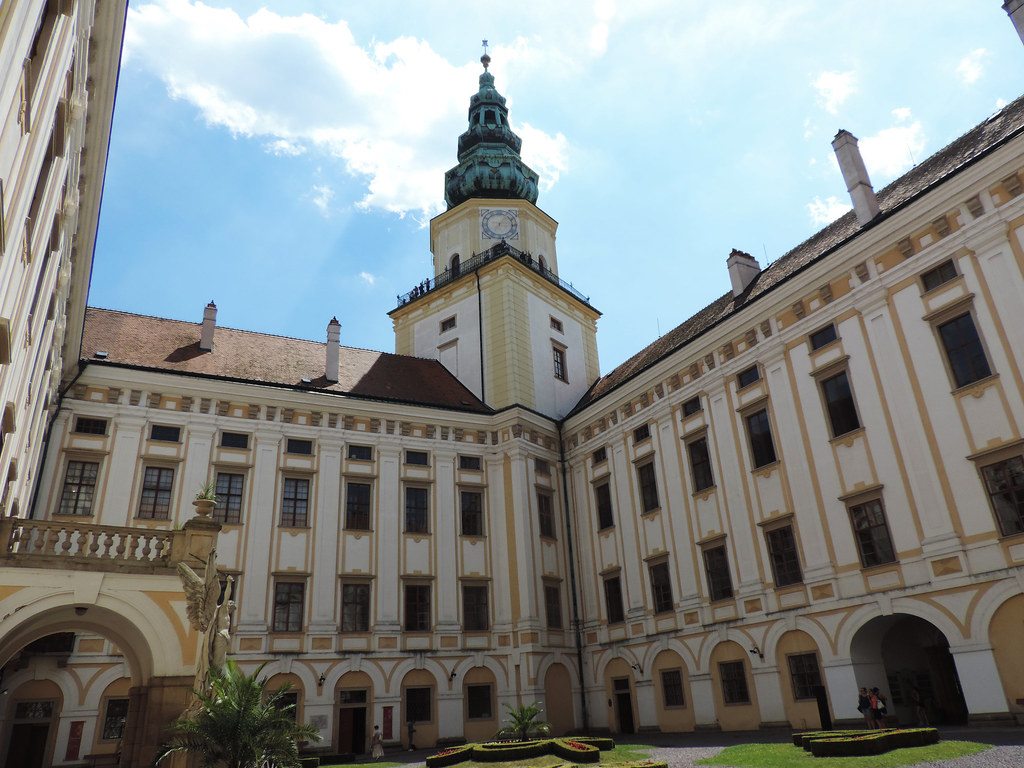 Kroměříž is a lovely small town with its UNESCO World Heritage listed Archbishop’s Chateau. It was the representational residence of Olomouc bishops and archbishops whose role was just as important in politics as in the church in those times. No wonder, the castle symbolizes power and wealth.

It was its gorgeous Baroque interior that impressed us the most. We could only visit in on a guided tour in Czech (as usual), but got our English textbooks. The Baroque-Renaissance Flower Garden is a short walk from the castle, and we visited it with a separate ticket. It’s like Versailles in miniature. 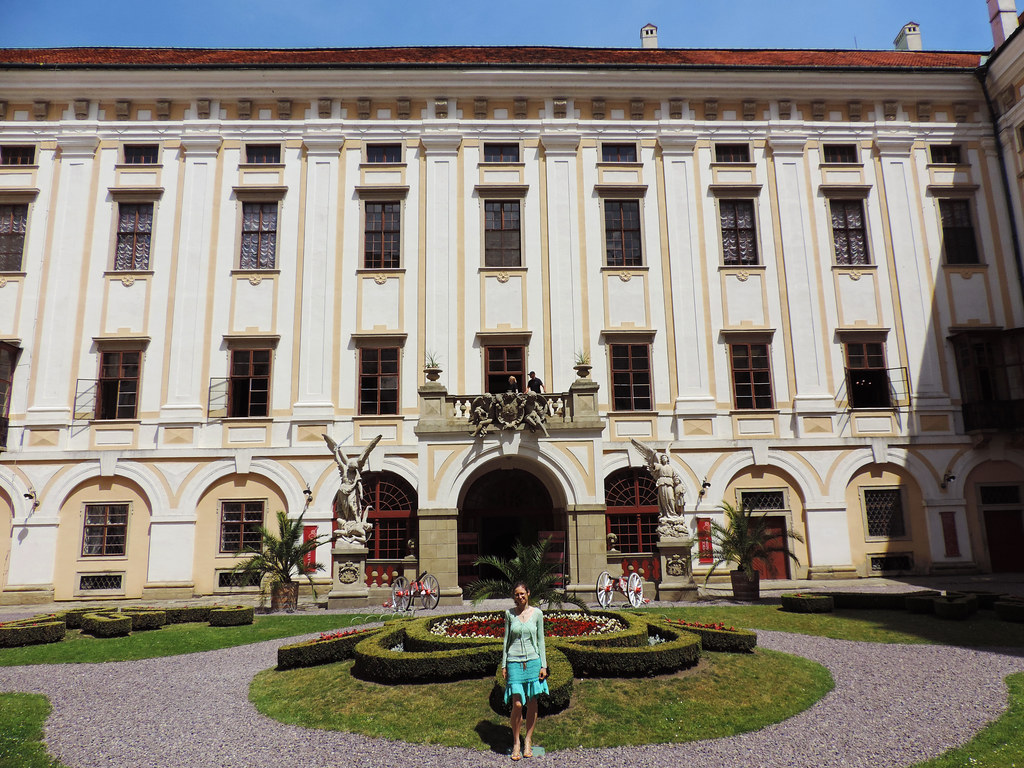 The Pleasure Gardens with all the pretty ponds and pavilions surrounding the castle are free to visit though. You can read more about our visit to Kroměříž here. 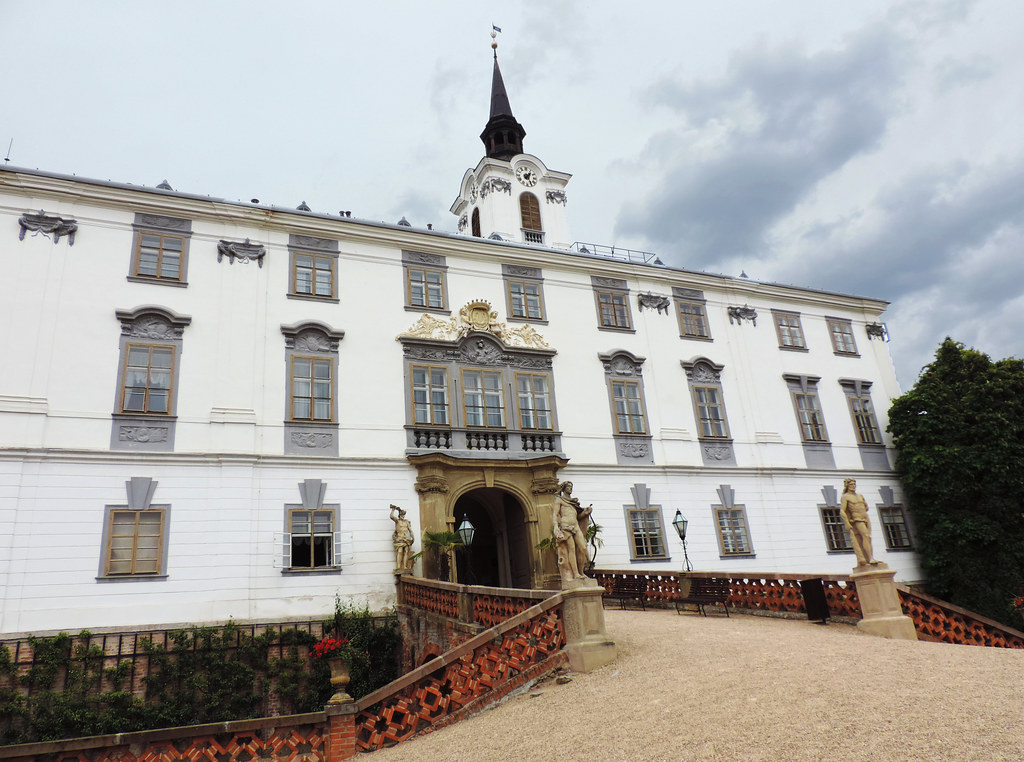 Not far from the historical town of Brno lies an elegant manor house: Lysice Castle. Built in the 19th century, it’s actually quite young.

Its richly furnished interior gave us an idea about the lifestyle of the wealthy Dubský family. It has a stunning old library, and we liked the fine glass and porcelain works displayed in all the rooms. Though this guided tour was again in Czech, we had no doubt it was worth doing it. The interior of Lysice is more splendid than what we expected when we had our first glimpse of the building.

We visited the garden on our own. Each of the three levels of these gardens has a bit different style, and the promenade colonnade offers the best views of them from above. 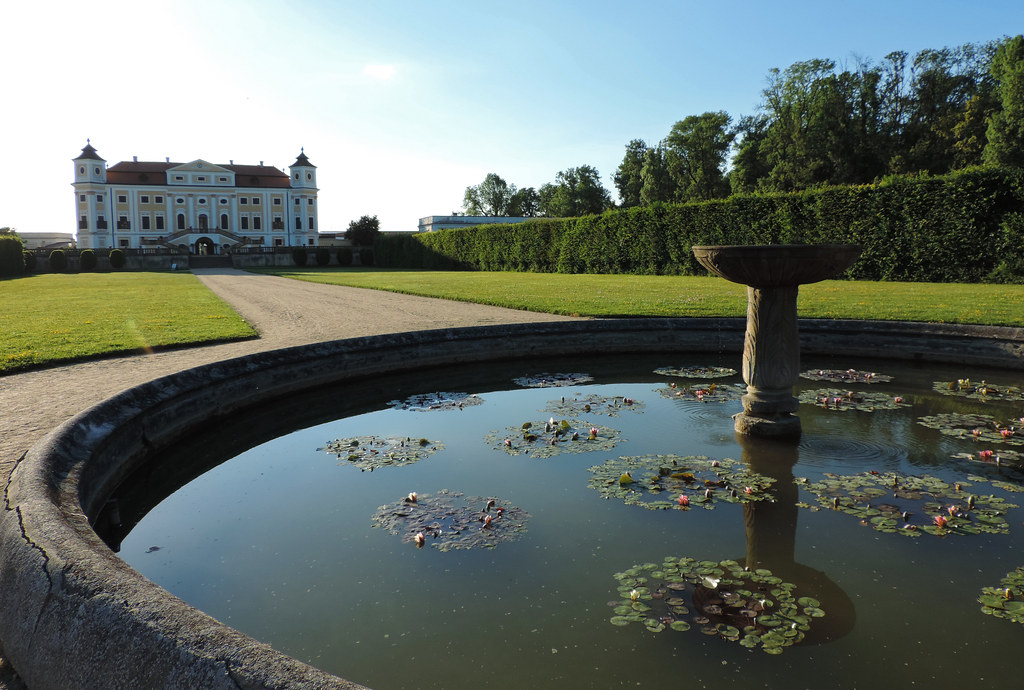 Four-winged Milotice Castle is situated in the middle of fertile vineyards not far from Lednice in Moravia. Originally it was built as a Renaissance castle, but later it was rebuilt in Baroque style. This is the only castle from this list where we didn’t see the interior. But we took a walk in the charming gardens: the rose garden, French Baroque garden, orangeries and the large English park. Though we were late for the interior tours, we enjoyed a nice summer sunset in the gardens.

Have you been to Czechia? Do you have a favorite Czech castle?