Once a hidden gem, by now an Insta star and a popular stop on the Iceland road trip of many. Stuðlagil, the Basalt Column Canyon in Jökuldalur valley, Eastern Iceland deserves the fame though, and it’s still worth visiting. Read this guide to find out why and how, and all the tricky details about finding it.

We found a hidden gem: an amazing basalt canyon!

This was one of our luckiest finds ever. And we loved Iceland so much, because it proved over and over to us that lesser known places are no less unique or wonderful than their more famous kin. Our favorite of these hidden gems was Stuðlagil. 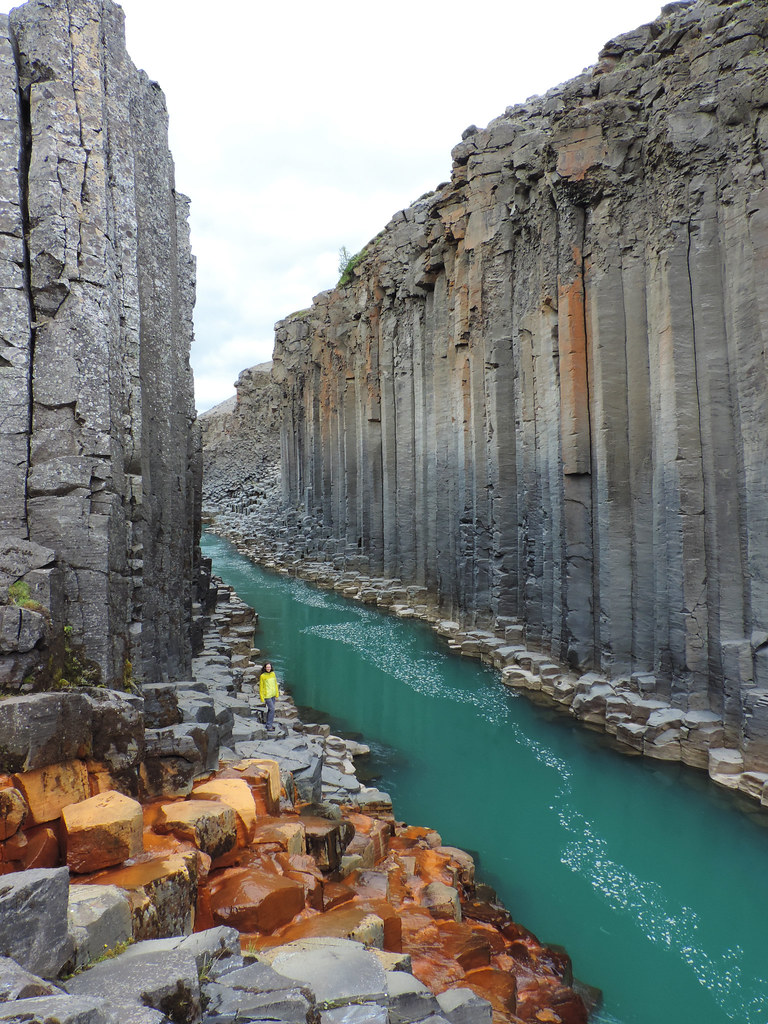 No queue for pictures back then… I truly stood alone

It was a hidden gem four years ago when we visited. We went to Iceland in August, which is the high season, drove to the trailhead of this canyon, struggled to find the right trail, and met only with another couple during our time there. We were both trying to figure out where exactly to hike to see the canyon, but we had different opinions. They didn’t believe us, and we ended up at this astonishing basalt canyon, just the two of us.

Eastern Iceland was not at all busy those days. Most visitors just drove through it as fast as they could to get to the north or the south. It’s not true anymore. Stuðlagil canyon became famous (Insta-famous, too – there should be a correlation, I guess), and you’ll likely never find yourself alone there. What’s more, you’ll likely need to stand in line for the best photos. Nevertheless, Stuðlagil is worth your effort and patience.

Where to find Stuðlagil Canyon? 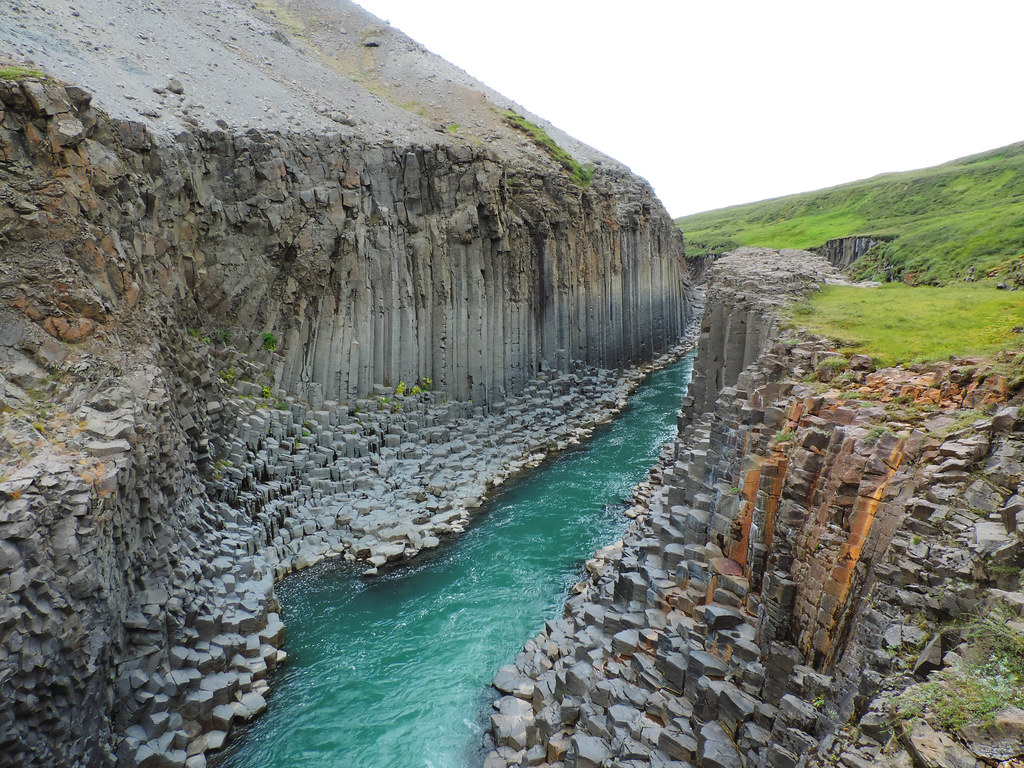 There’s one advantage of it not being a hidden gem anymore: the trail is more obvious to follow. Back in the day when we went there, we got lost a few times along the way, and were not even sure how we ended up by the canyon with the help of our GPS. But we were quite sure we found it, because those basalt formations we saw were like no other, not even in Iceland!

The east side viewpoint

But how to find it? It depends on what exactly you want to find. When heading to Northern Iceland from Egilsstaðir, you need to take a turn to Road 923. But if you type “Stuðlagil Canyon” in Google Maps, it’ll take you to a newly built viewing platform on the west side of the river. It’s accessible by more than 200 metal stairs, and offers some nice views of the basalt canyon. But these are not those iconic views you’re likely looking for. Those are on the other side, and you have to hike for them. 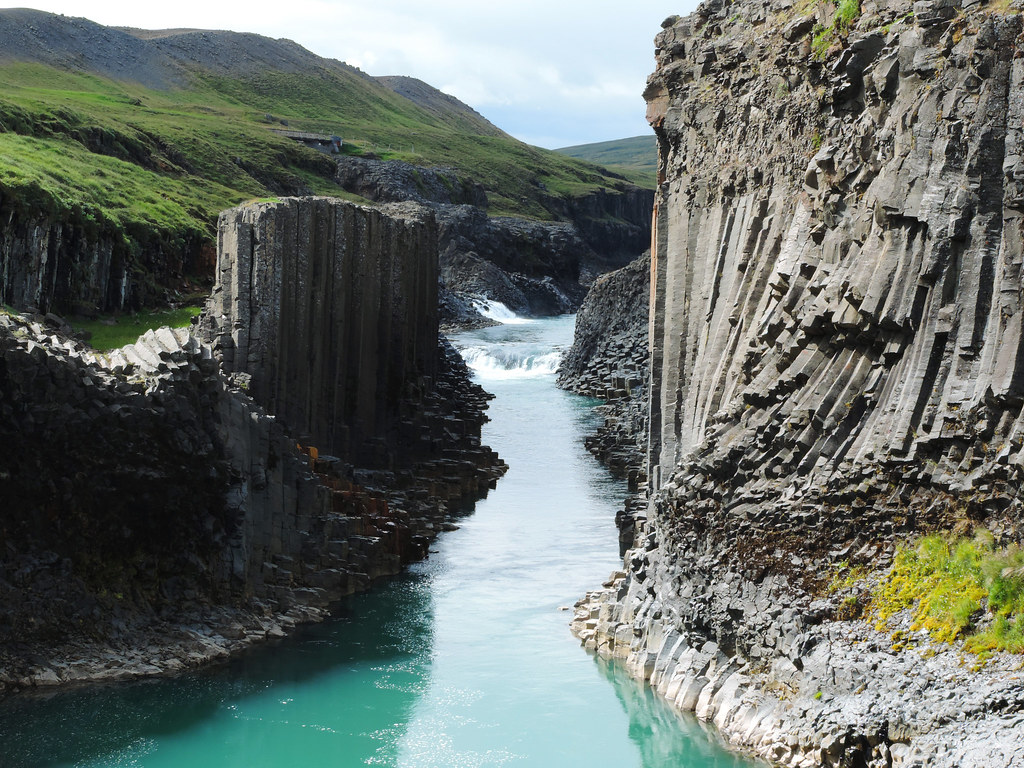 The trailhead for the east side canyon hike is only about 6 minutes drive from the viewing platform parking lot. Type “Klaustursel” in Google Maps which is a name of a farm that’s right by the parking lot. It’s easy to recognise the small parking lot by the bridge, then you need to follow the trail after crossing the bridge. The hike to Stuðlagil Canyon takes about 5 kilometres, and it’s very easy.

The road actually continues through the bridge and for a while after it, but we don’t recommend driving it with smaller cars, or if you’re not comfortable driving on an unmaintained, bumpy road.

Hiking to the east side canyon views 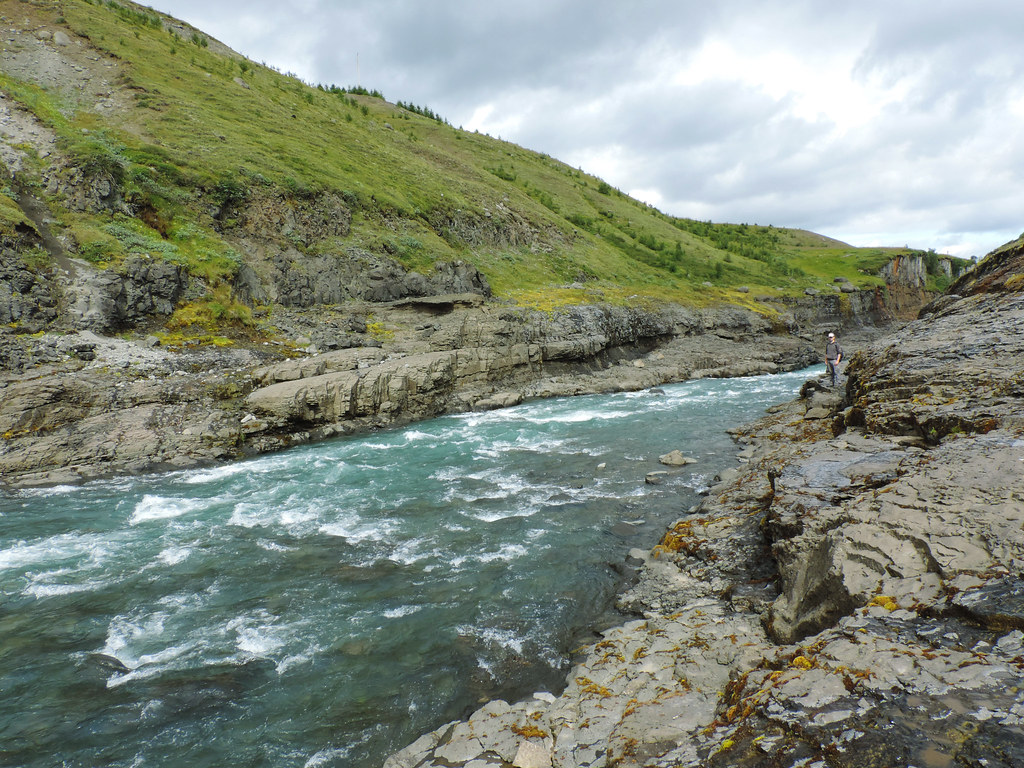 A few years ago, it was not a well-marked trail, and not at all straightforward to follow, but this changed as more and more people came to visit. Here you can see it on a trail map.

Halfway to the canyon you find Stuðlafoss, the Basalt Column Waterfall. It’s a nice basalt formation, as well, though not nearly as spectacular as the canyon itself. We were happy to see it, because we knew we must be on the right trail then. And if you’re on the right path, it’s a wide, gravel path which is almost completely flat. At the end, you can climb down into the canyon on a slippery, usually wet trail. 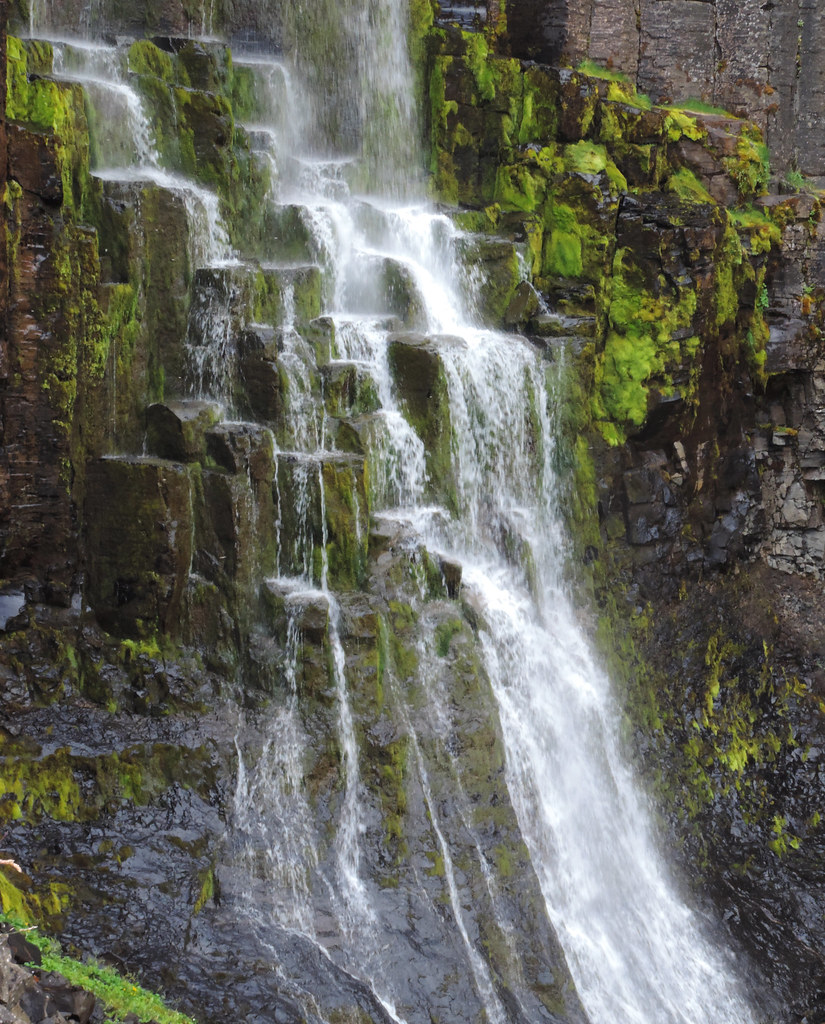 The views? Nice. Yes, this is a nice trail (compared to many breathtaking trails in Iceland), but the destination makes it worth it. This basalt canyon will take your breath away.

What makes this canyon so special?

I mean, just look at it. Those hexagonal rock formations may look fake in the pictures, but they’re not. They are one of the many otherworldly-looking wonders of Iceland! 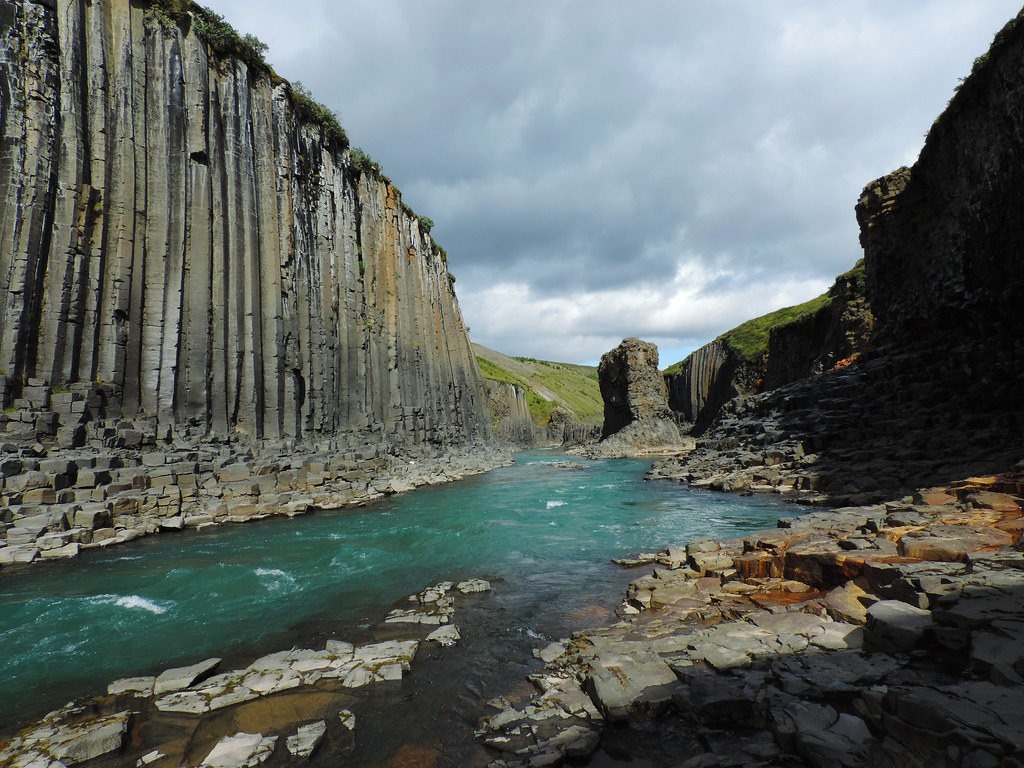 Also, they may not look as large in the pictures as they are in reality, but let us assure you that they’ll make you feel small as you climb down to the bottom of the canyon. Looking up at the huge columns made us realize the sheer power and beauty of nature. Sitting on the rocks and staring at the turquoise river felt like the definition of peace.

How did the canyon get revealed?

The canyon was carved by the Jökulsá á Brú river, and existed for centuries, but it was under water. Though the sculptor of the canyon was nature, people had a role in revealing it, even if not intentionally. 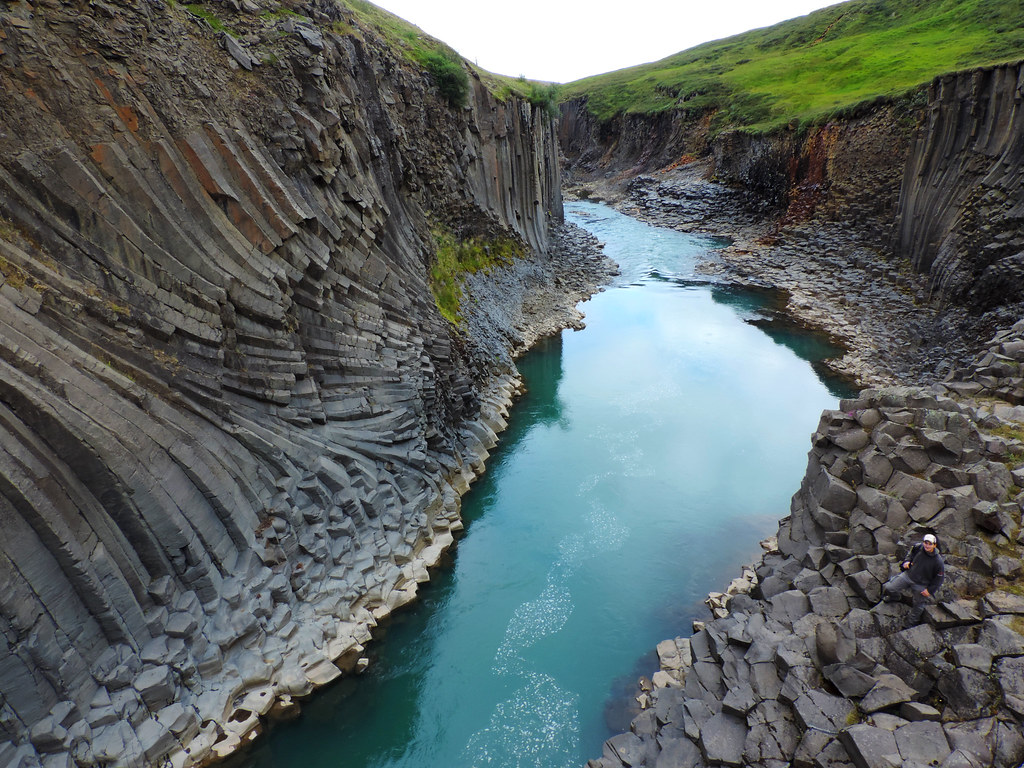 In 2007 a hydroelectric plant was built nearby, and a reservoir was created on the Jökulsá á Brú river. This affected the sources of this previously forceful glacial river that carried a vast amount of sand, dirt and mud from Vatnajökull glacier, and turned it into the calm, clear, turquoise spring-fed river we see today. The water level is much lower, and that makes it possible to see the Basalt Column Canyon that was previously submerged.

Is there a best time to visit? 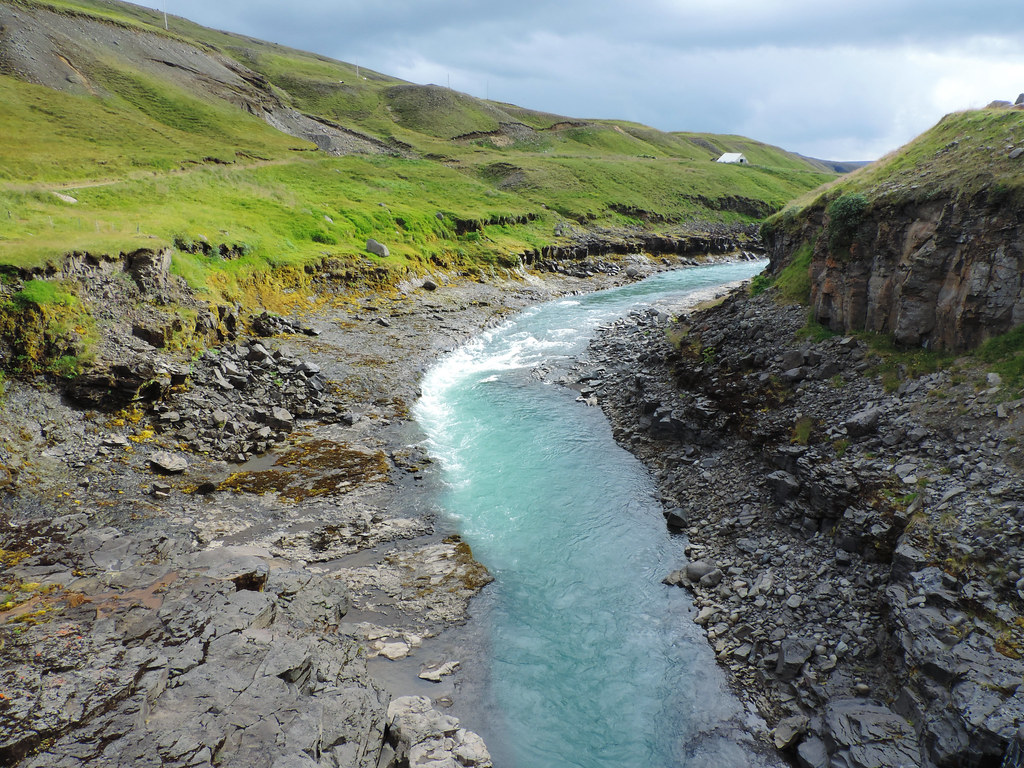 Iceland is lush green and full of flowers in the summer, that’s why we chose to visit in July and August. The prices are high, because it’s the high season, but we think it was worth it. Driving and hiking conditions are the best, so you’ll have a chance to visit some more remote areas.

As for Stuðlagil Canyon, Jökulsá á Brú river changes to a murky brown color late in the summer when the dam at Kárahnjúkar releases surplus water into it from the reservoir. So the best time to see the canyon with its turquoise river is early and mid-summer. We visited it in the beginning of August. 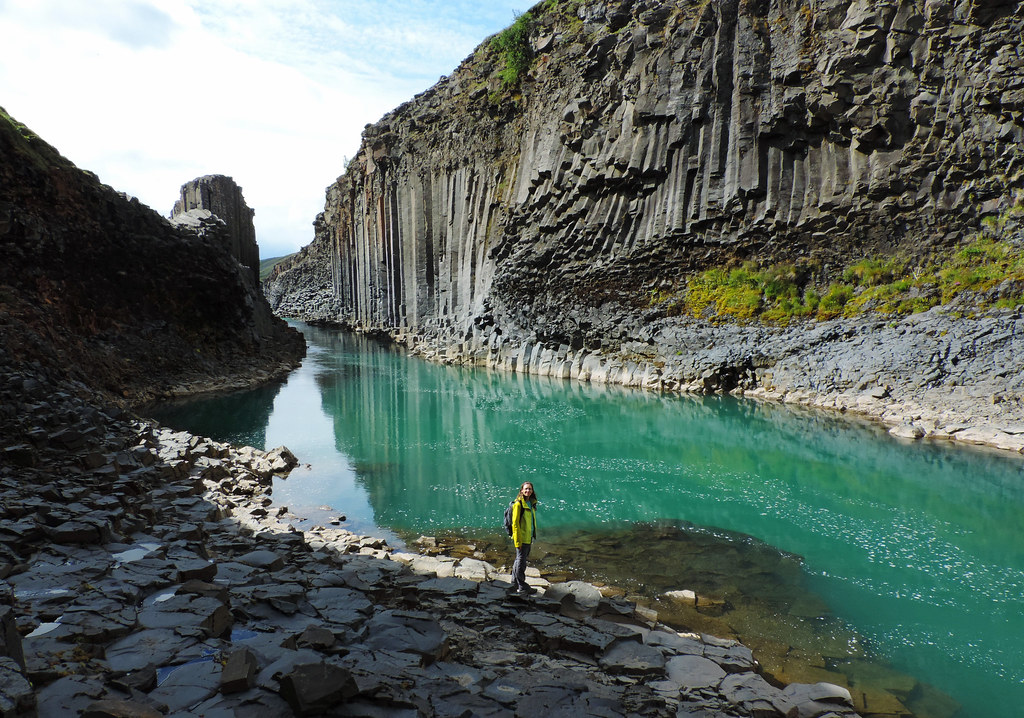 We spent 2 nights in the Eidagisting Guesthouse in the small village of Eiðar while exploring Eastern Iceland. The largest settlement in the eastern region is Egilsstaðir – with about 2000 inhabitants. 🙂 It’s also the closest to Stuðlagil Canyon – and it still means about an hour drive.

However, there’s a guesthouse called Skjöldólfsstaðir that’s about 25 minutes drive from the basalt canyon. Since it’s not a full day program, rather a longer stop on your way, you can also look for hotels and guest houses in the smaller settlements along the Lagarfljót river – like Hallormsstadur or Vallanes -, or in the eastern fjords – like Seydisfjordur, Eskifjordur or Reydarfjordur.

What is the most spectacular canyon you’ve seen?