We loved Barcelona so much and it’s hard to decide what was our very favorite thing there. Its architecture is a strong candidate though. We’ve seen amazing architecture in other cities, too, but Barcelona is different. Whether Gothic or Art Nouveau, classic or modern it has breathtaking pieces in several different architecture styles. Then there’s Gaudí. He was just a single architect but his works are the main reason we found Barcelona’s architecture unique in the world. 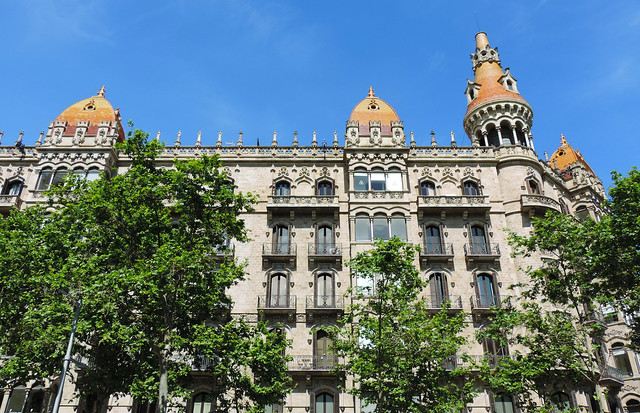 Architecture styles are not to be described, they are to be seen – and that especially stands for Gaudí’s works. They are unmistakable to identify even if you don’t know anything about architecture or Antoni Gaudí. Because you’ll notice their uniqueness – and you’ll be right.

Gaudí’s style inspired by nature is indeed unique in the world. He used colors and shapes from nature and his works reflect how rich and creative nature is. They also reflect the things he was passionate about in addition to nature: religion and Catalonia. He was a Spanish Catalan architect and most of his works are located in Barcelona. 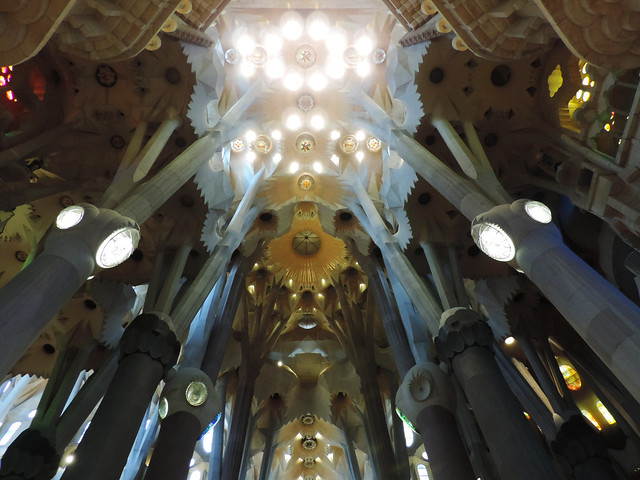 No doubt that the most famous of them is the church of Sagrada Família. The church that’s under construction for more than 130 years. Yet it’s the most stunning and special church we’ve seen! Nature and religion meets there in perfect harmony as it’s built around the theme of a forest. It’s rich in symbols both inside and outside and the audioguide gave us a lot of exciting information about those during our visit. (We shouldn’t mention it’s definitely worth a visit, should we?)

The construction actually started in 1892 and the plan is now to complete it by 2026 – the centenary of Gaudí’s death. We’d love to see it ready for sure. 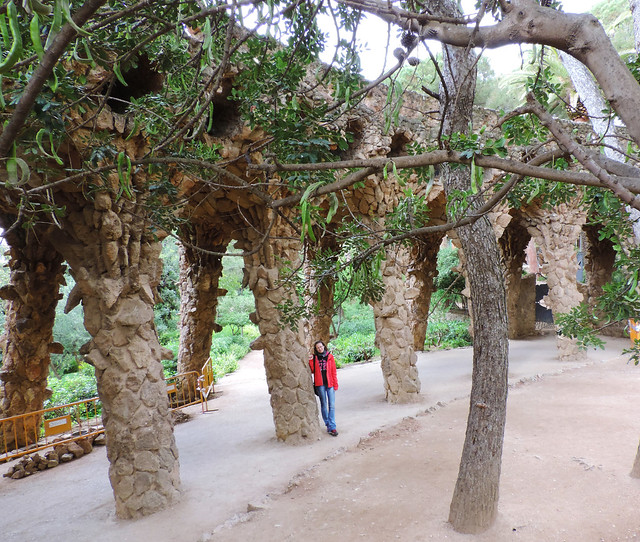 Another unique work of Gaudí is Park Güell. The initial project was to build a residential quarter in style for the rich and famous. And it was a failure so it was left unfinished. But that’s how a genius fails: today it’s a UNESCO World Heritage Site.

We felt like the whole place was materialized from an old storybook: tiny fairy tale houses, colorful terraces and statues, flowers and ceramics in harmony. And very few straight lines – that’s typical of Gaudí again. The most beautiful part of Park Güell is called the architecture zone and it can only be visited with a ticket. But that doesn’t mean there’s nothing worth seeing outside of the architecture zone. We liked walking on bridges that perfectly blended in nature and we found a fabulous viewpoint to look over Barcelona at the cross on top of the hill. We spent almost half a day in the park and it’s really not a place where you want to hurry.

Our best advice for the architecture zone: book your tickets in advance! Even if you are not a planner, this visit has to be planned. If you just show up and want to buy the ticket on the spot they will possibly be sold out for the day. 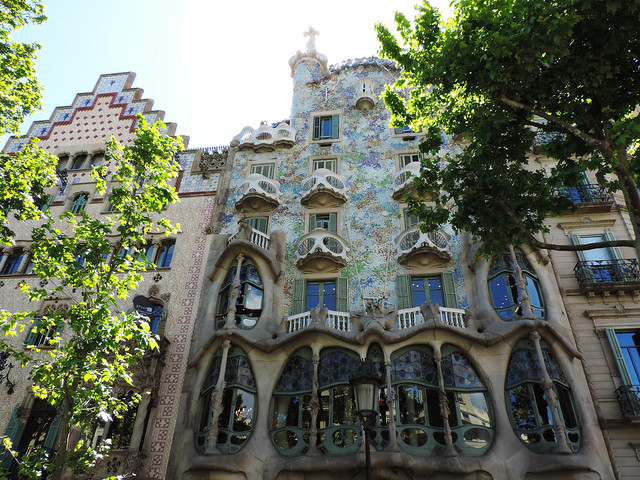 Hope you are not bored by Gaudí yet because we still have beauties to share. Several residential houses in Barcelona (especially in Grácia quarter) were designed by Gaudí and it’s fun to find them! They are located quite close to each other anyway.

Casa Batlló is probably the most famous and unusual of the residential buildings designed by Gaudí – well, re-designed by Gaudí, actually. It’s the house that has no straight lines. Its main inspiration was the ocean and all the colors and motifs inside reminded us of this fact. 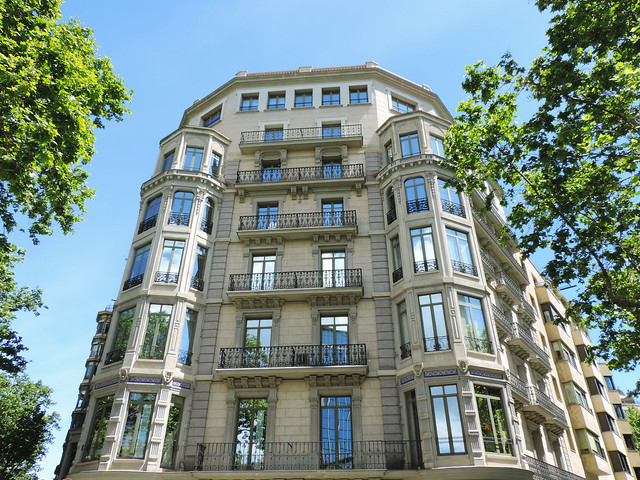 Casa Milá (or La Pedrera) is located a short walk from there. Its facade reminded us of waves and the forged iron balconies are like alga in the sea. The whole house reflects the irregularity and the harmony of nature. Our favorite part was the roof though. You might think what the hell could be so special about a roof, but that means you haven’t seen any of the ones designed by Gaudí. You totally should. 🙂 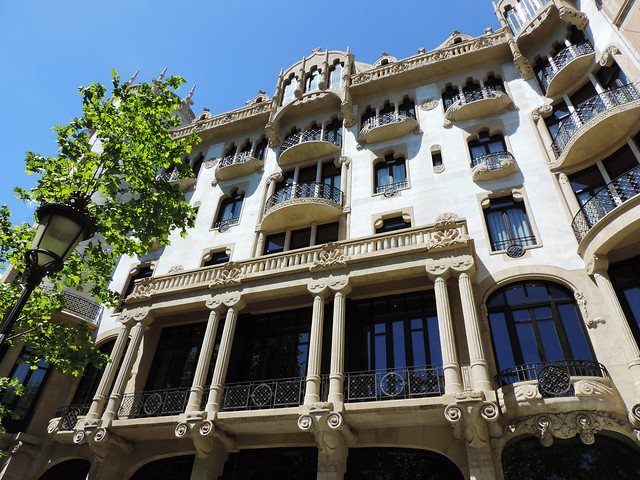 Casa Vicens and Casa Calvet are also Gaudí-houses in Grácia. Then there’s Palau Güell in the Gothic quarter. Then some works are more out of the city center and we couldn’t even fit them into our 5 days schedule – like Torre Bellesguard (residence), Colegio de las Teresianas (it operates as a school until today) or Colonia Güell (church and crypt). Next time… 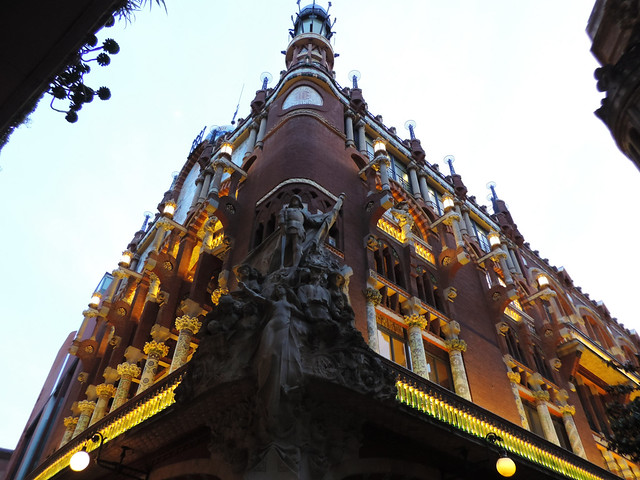 Gaudí had his unique style with lots of Art Nouveau elements but believe it or not, not all the fabulous Art Nouveau buildings in Barcelona were designed by him. Lluís Domènech i Montaner was another famous architect of the Catalan Modernisme. Quite an unlucky guy, we think, as his buildings should compete with Gaudí’s in Barcelona. 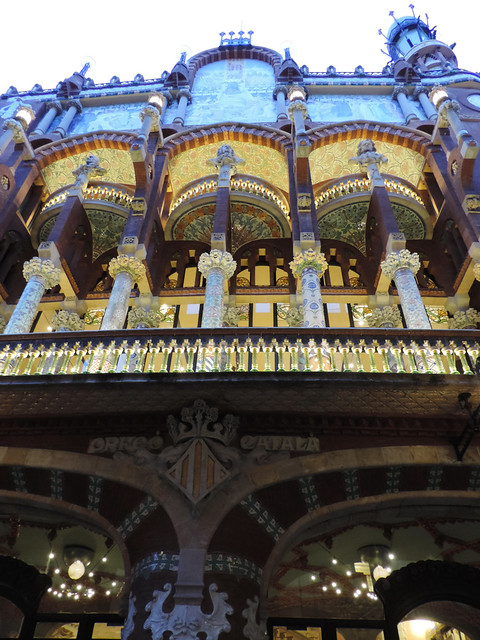 The most famous ones are Hospital de Sant Pau and Palau de la Música Catalana – both are UNESCO World Heritage Sites. Palau de la Música operates as a concert hall until today and it has a café and a restaurant inside, too. Hospital de Sant Pau on the other hand is not a functional hospital anymore (it was until 2009). Today curious visitors can explore its underground tunnels and some of its pavillions. What could we say? We’ve never seen a hospital quite like that ever… 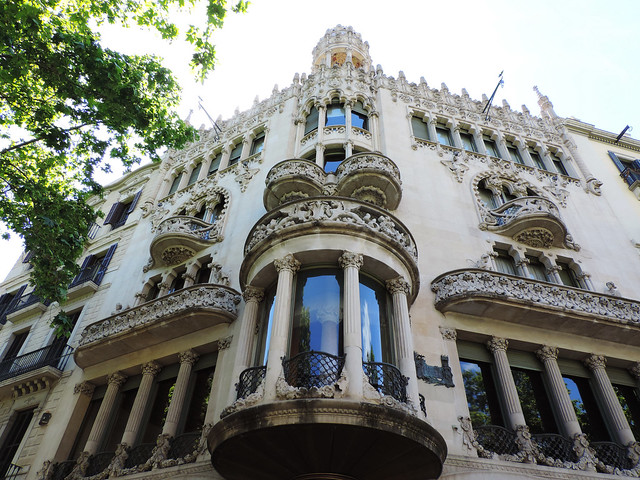 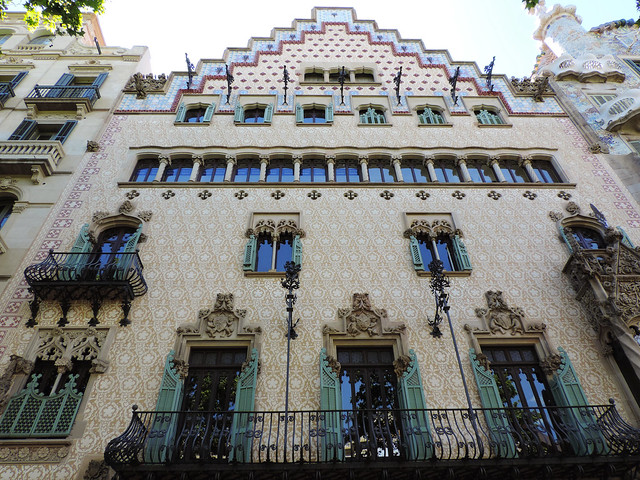 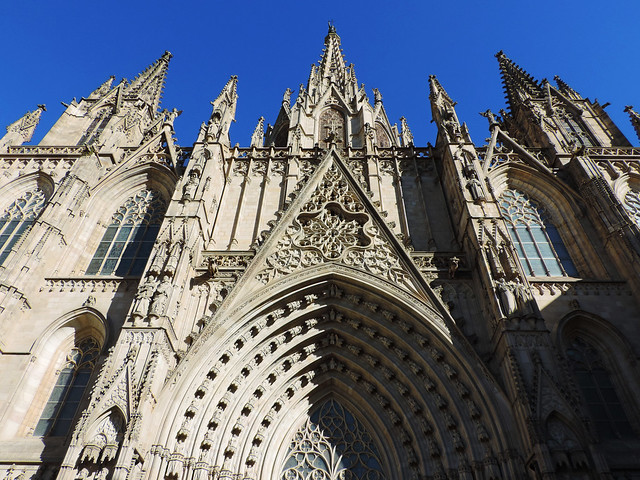 And you thought we finished this post? Noooo… not yet. Only Art Nouveau. That’s the real highlight in our opinion though. Okay, it’s our favorite architecture style so we are biased. But we recognized pretty pieces of architecture other than Art Nouveau in Barcelona.

Like Barcelona Cathedral – or Cathedral of the Holy Cross and Saint Eulalia by its proper name. It’s a majestic Gothic Cathedral from the 14th century and it’s in the heart of Barre Gothic, the oldest district of Barcelona. Walking in its narrow streets took us back several centuries ago… 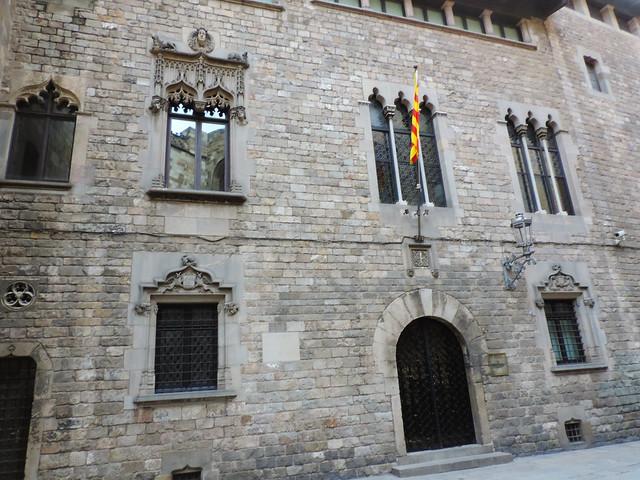 Before you think that special buildings are all from the past let us give some proof that Barcelona has an exciting present, too.

The Agbar Tower is designed to give the impression of a geyser. It reminded us of the Gherkin of London.

Santa Caterina Market is a food market building near Barcelona Cathedral that caused a lot of controversy but turned out to be a special place in the long run.

And now we are done. And you deserve a delicious coffee if you got until this point – should we have warned you to get some beforehand? 😛

Have you been to Barcelona? Which city’s architecture has amazed you the most?