Anaga Rural Park offers the best coastal trails in Tenerife – and they’re among our favorite coastal trails in the world! This full day loop trail from Benijo to Faro de Anaga Lighthouse is special, because it gives a taste of everything Anaga has to impress you: wild, picturesque beach, dramatic coastline, hidden bays, giant coastal cliffs, wildflowers, cacti and laurel forests.

It’s not an easy trail though. The full loop is about 15 kilometres which is not particularly long, but there were lots of ups and downs as we hiked through those picturesque, deep ravines. The second part of the coastal section (between El Draguillo and Anaga Lighthouse) is quite narrow and slippery, we had to watch our steps carefully – and we recommend avoiding this section in wet weather, because that makes it dangerous. 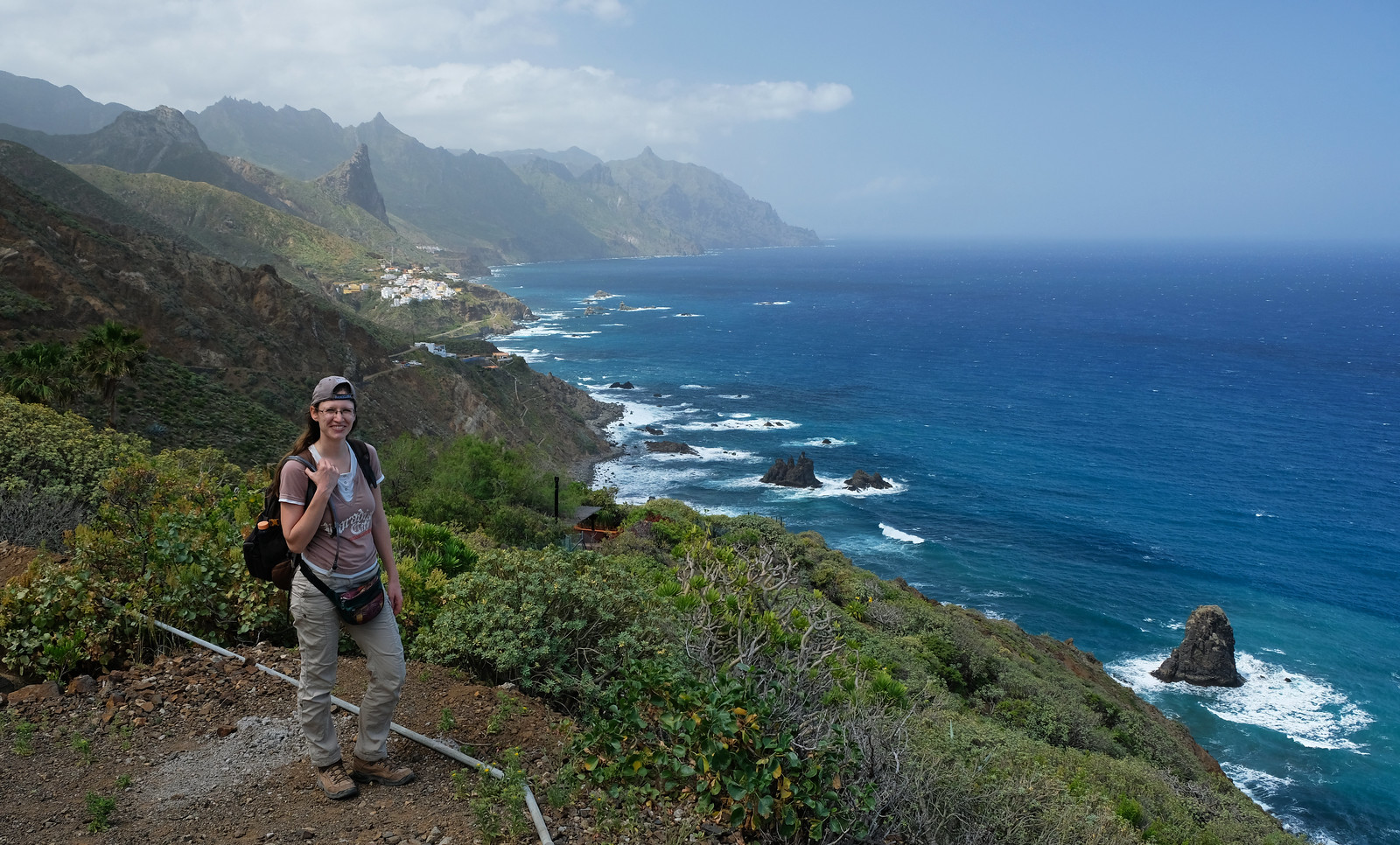 Also, this was the only trail we’ve encountered in Tenerife where Csaba had to carry our 1.5 years old Tomi in the carrier backpack almost all the way, because we couldn’t let him walk on his own, it wouldn’t have been safe for most of the trail. However, the first section until El Draguillo is a light (and very scenic) coastal walk, and you have the chance to do a much smaller loop trail to get back to Benijo from there. That could be a better option for families with toddlers and small kids. 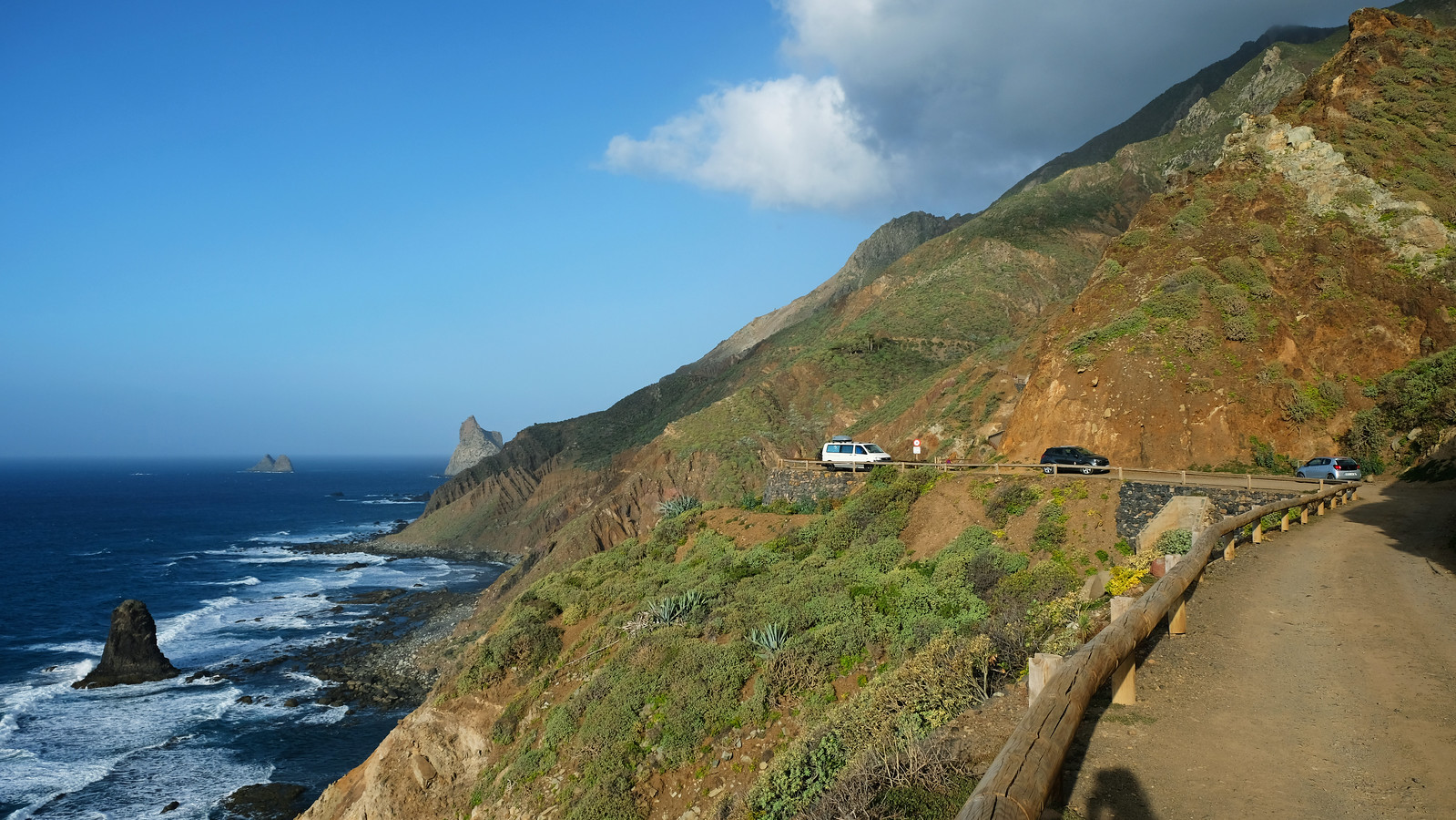 The trailhead of this loop is already so tempting that we almost didn’t feel like starting the actual hike. Because it starts from Benijo Beach, one of the most photogenic, remote and wild black sand beaches in Tenerife. But we knew that doing 15 kilometres with a toddler requires time, so we postponed enjoying Benijo Beach until after the hard work. 🙂

When I said that Benijo Beach is the trailhead, it wasn’t quite accurate. The small village of Benijo is where you can park your car as that’s the end of the paved road. However, there’s no real parking lot, we left our car in a dirt pullout right after the village, and it’s good to arrive early as there’s not much space. 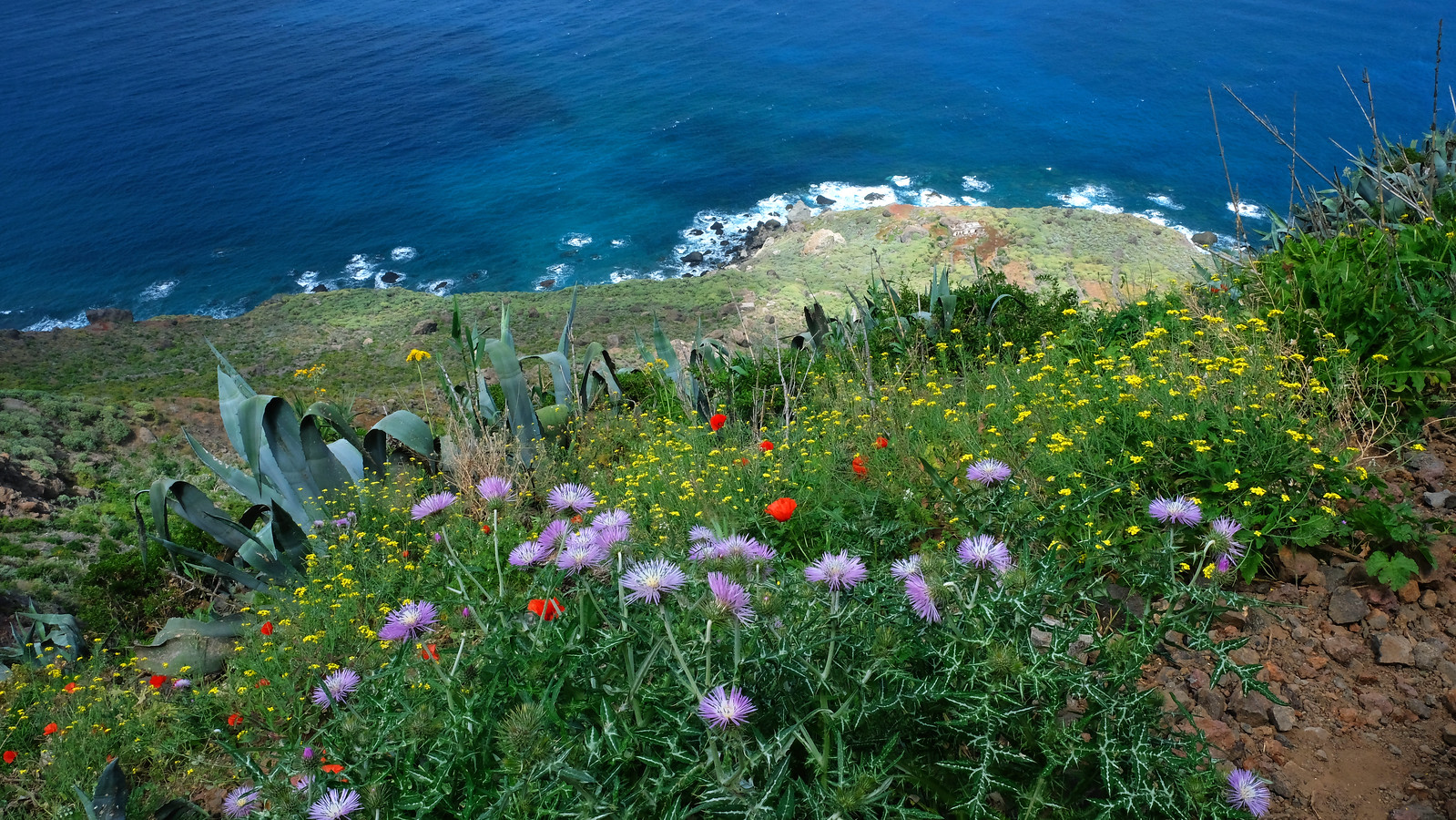 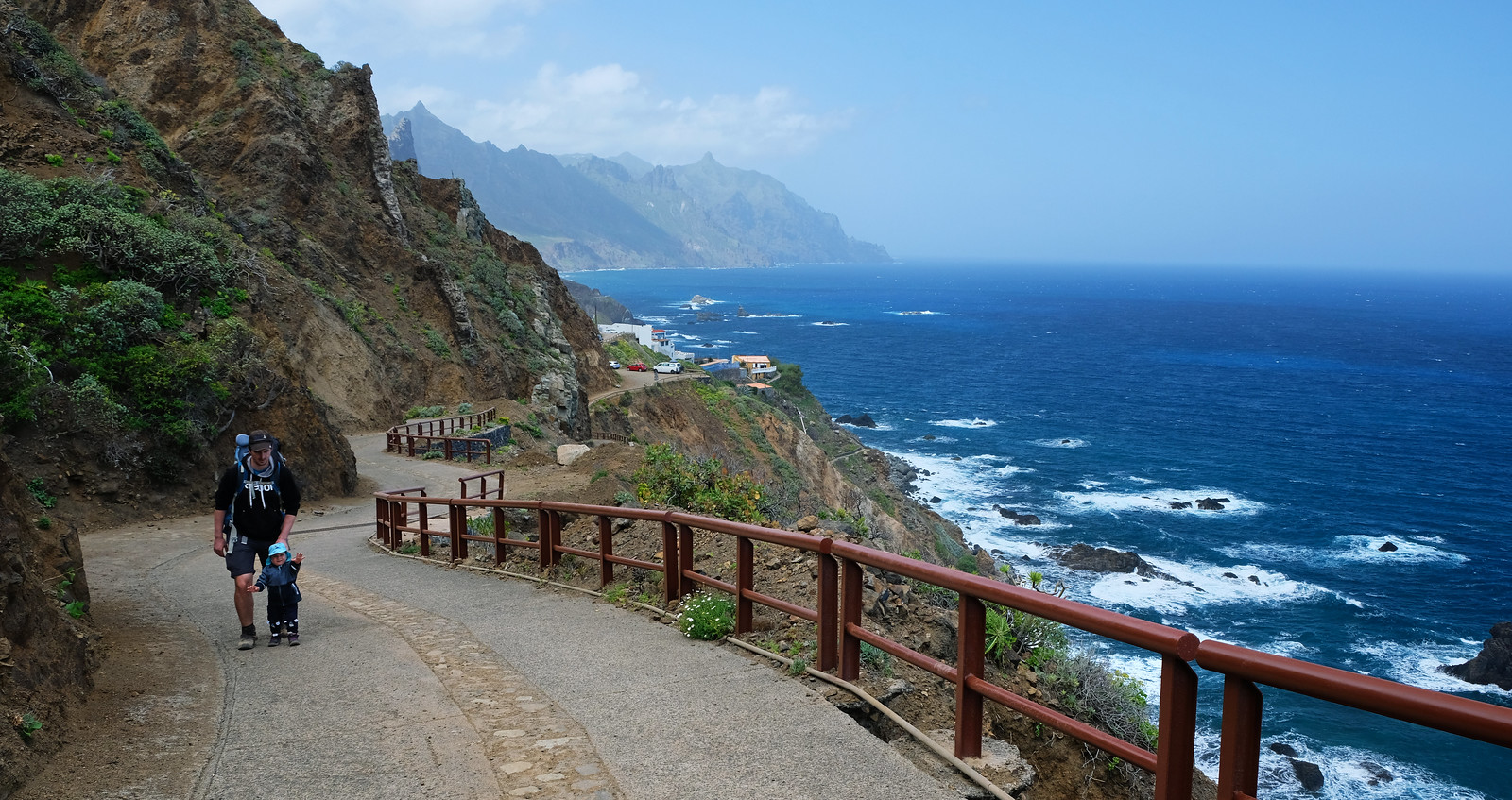 Believe it or not, El Draguillo is another small village, but it can only be accessed by a dirt road as the paved one ends at Benijo. That dirt road is also the first section of the loop trail. Why not drive to El Draguillo then? I’m not sure if it’s allowed, except for locals, but even if it is, you have no reason to drive past Benijo.

First, you can’t park anywhere in El Draguillo. Second, it’s not a busy road, only that few locals use it who live in the village, so your walk there will be pleasant and easy. And pretty! The views are just as breathtaking as anywhere on this loop, and it would be a pity to drive past them too quickly. 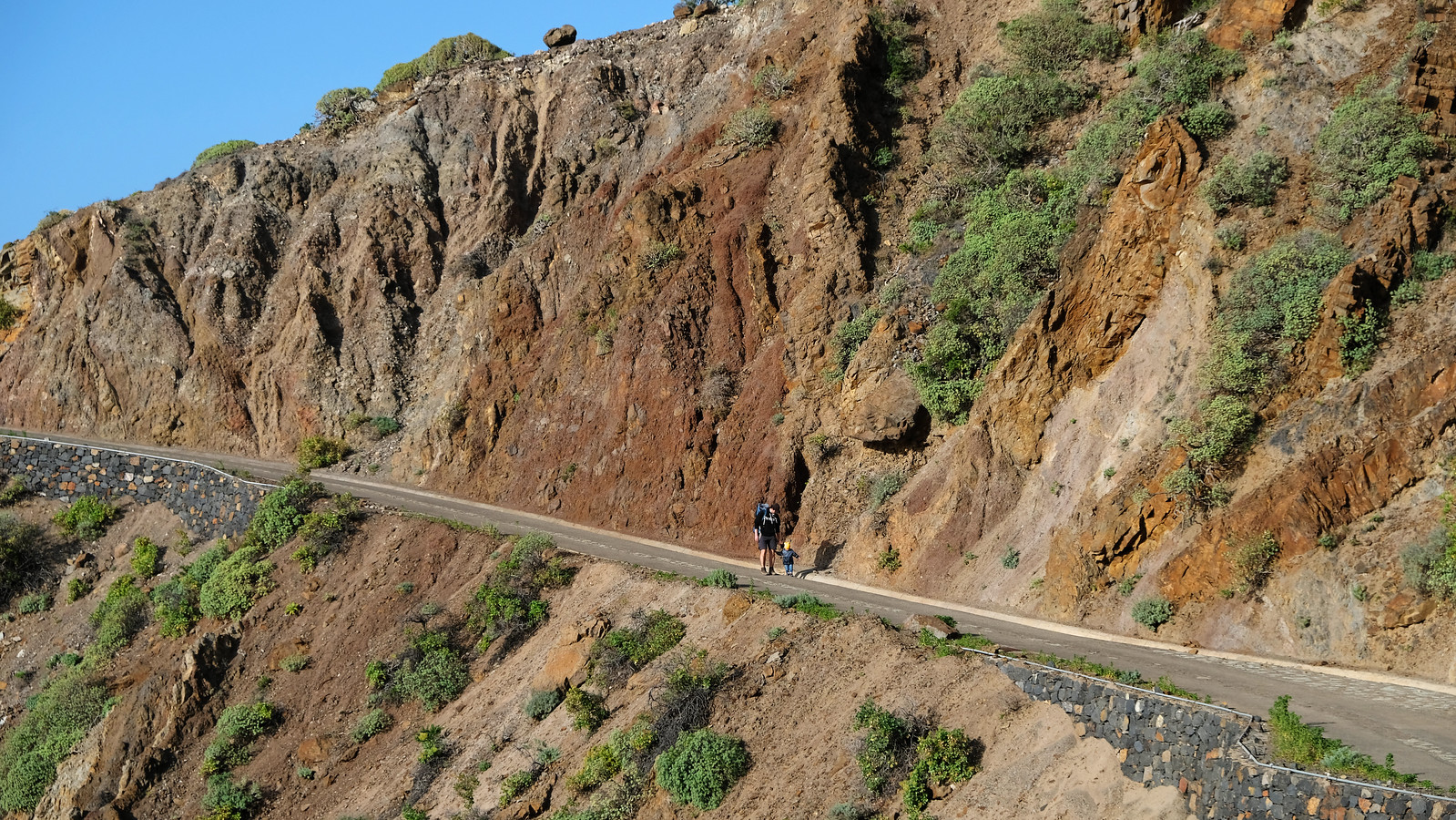 Tomi walked this section all the way, and this is the only section of the loop that we can call family-friendly. You can then turn back from El Draguillo and get back to Benijo Beach on the same way, or make it a short (5 kilometres) loop if you take the trail that goes up into the Anaga Mountains from El Draguillo – here, I have it on a map for you. 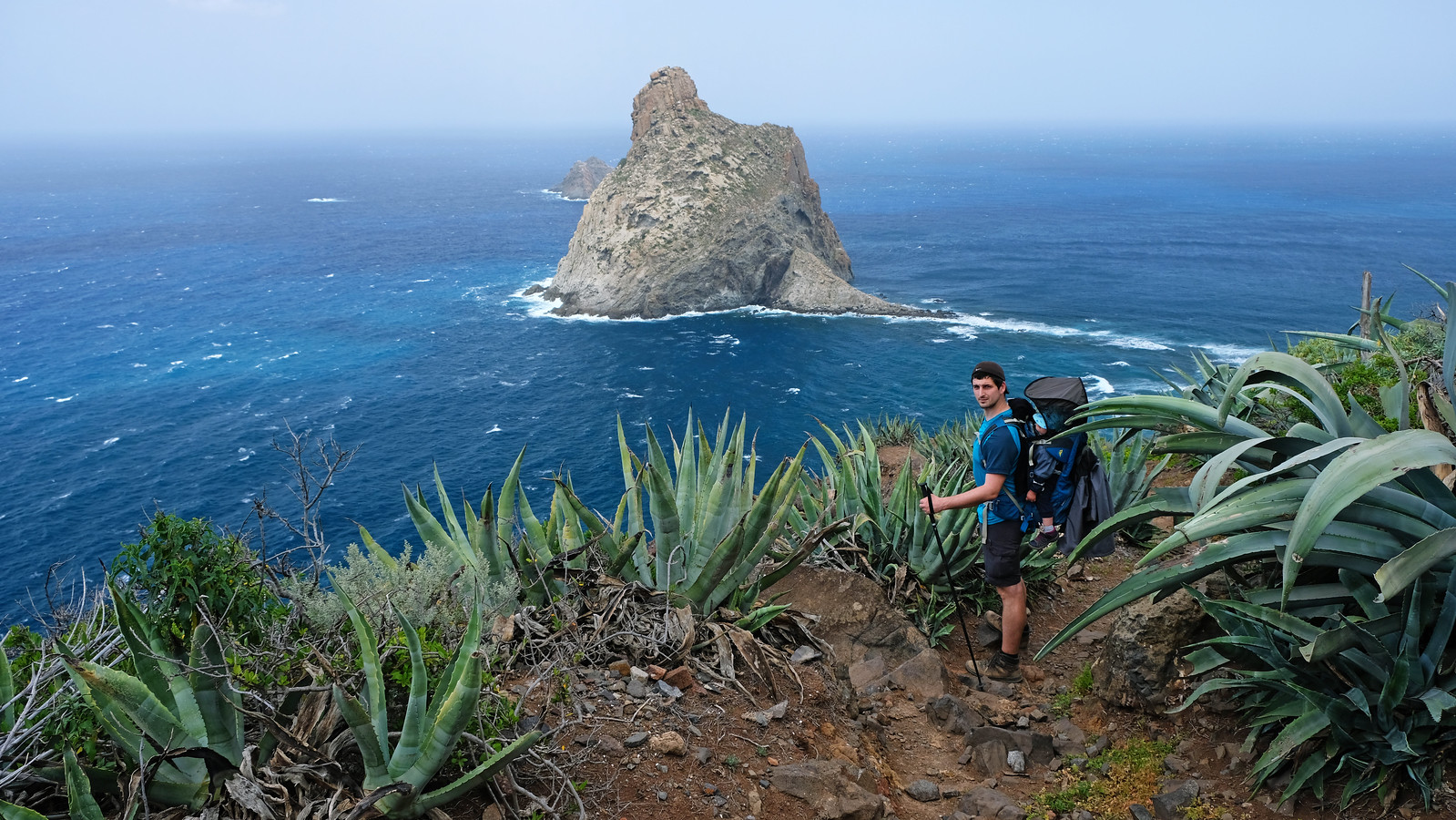 But we didn’t make it shorter for ourselves. Not that we regret, because the scenery was unbelievable all the way! The trail is well-marked, but it becomes very narrow and often steep, too. We passed some lonely and abandoned farms, but mostly it was just us, the green shades of the coast and the blue shades of the ocean, some shy mountain goats and lots of wildflowers (we did it at the end of March). 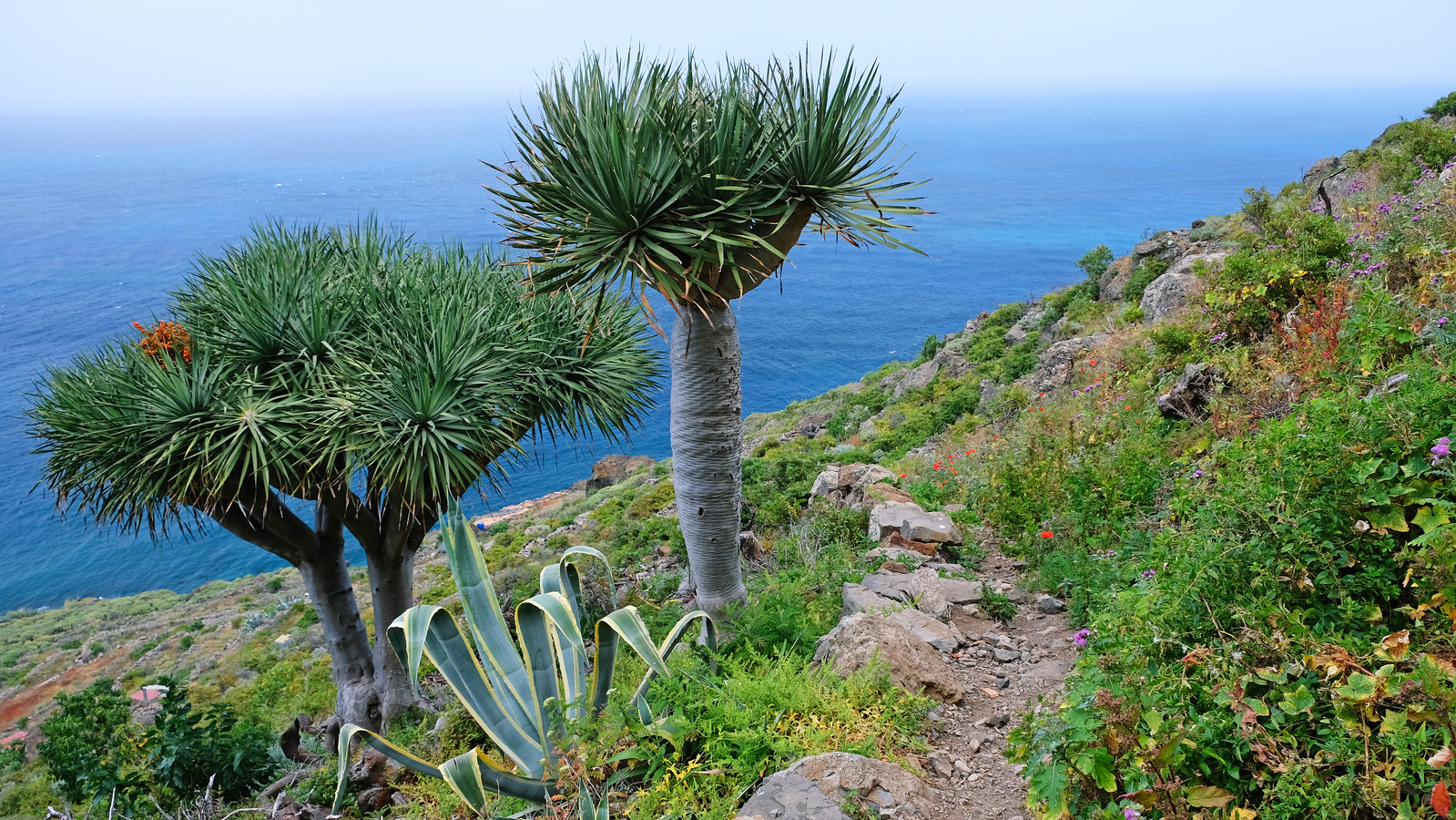 The islet of Roques de Anaga was a particularly photogenic sight, and we caught glimpses of several inaccessible beaches on the way, too. More amazing coastal views opened up when we reached Anaga Lighthouse. 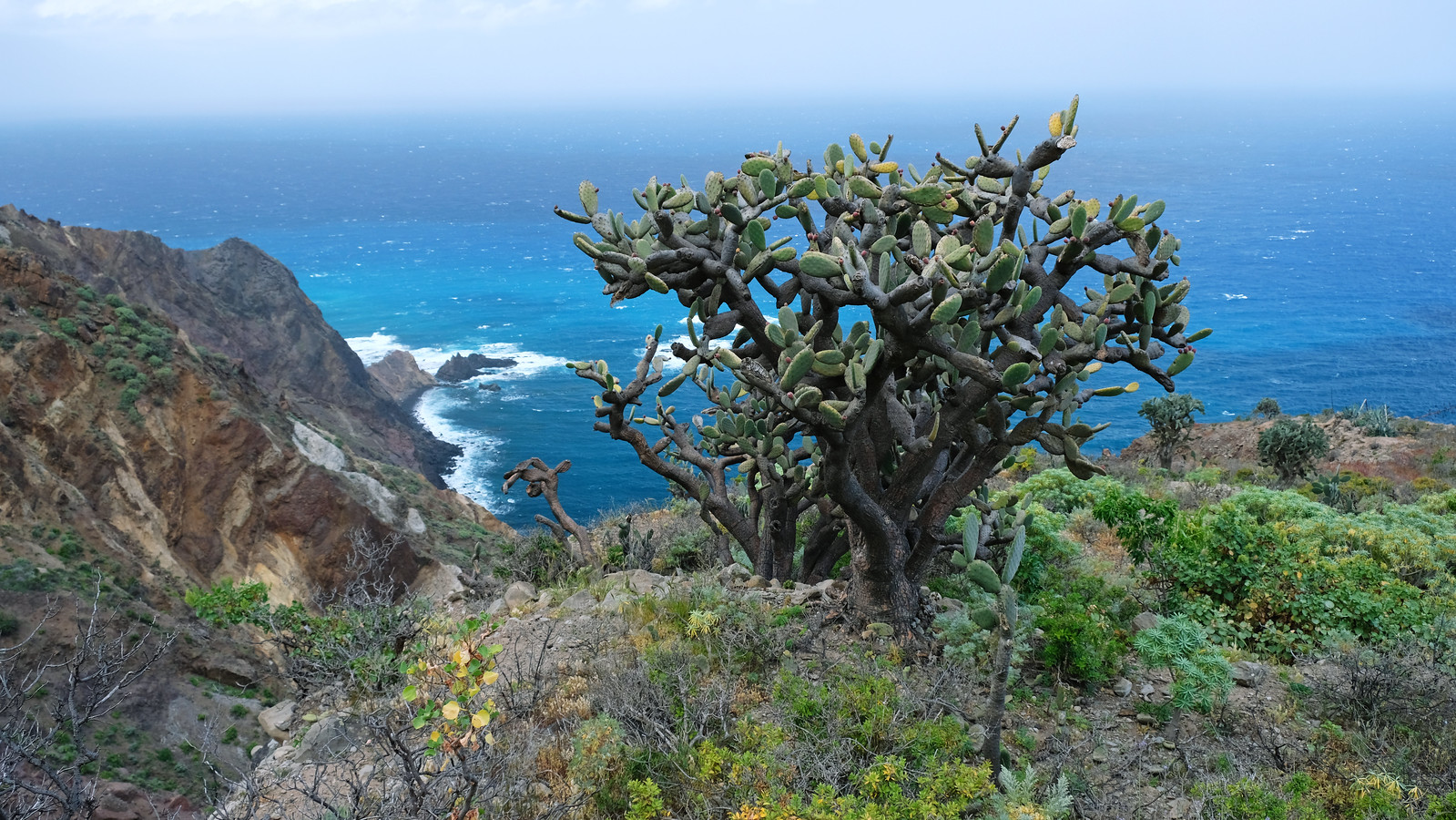 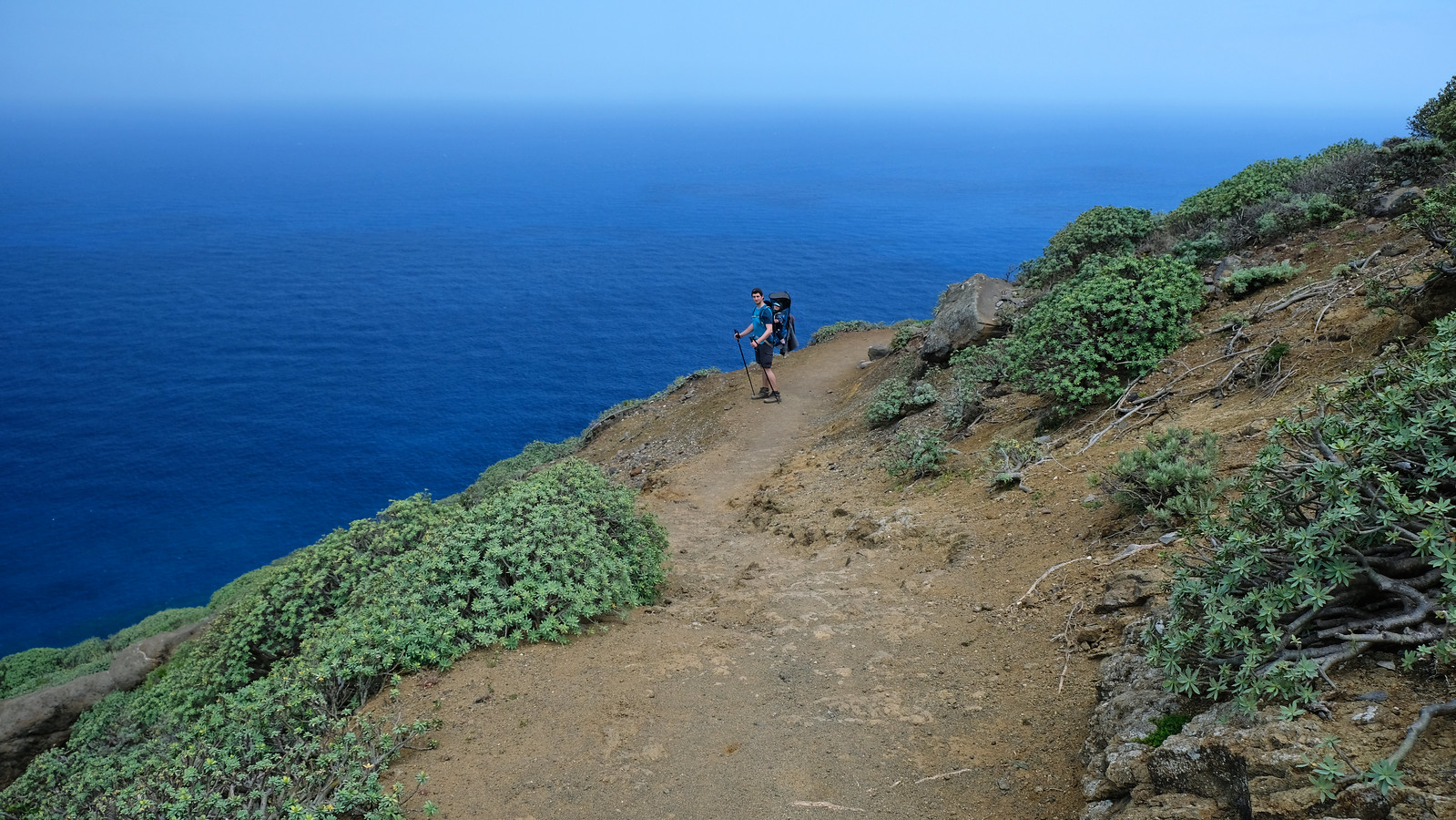 But you need to know that the lighthouse can’t be accessed (it’s fenced, and access is prohibited). There’s a viewpoint right next to it where you can sit down, have a snack and enjoy the views. It’s a small and not even entirely flat area – which is no problem if you’re not with a toddler. However, with Tomi we decided not to stop for a longer rest. It wouldn’t have been safe for him to run around there, even while holding our hands, so we kept him in the carrier backpack, and that meant we had to be on the move. Up, up!

Up into the mountains towards Chamorga 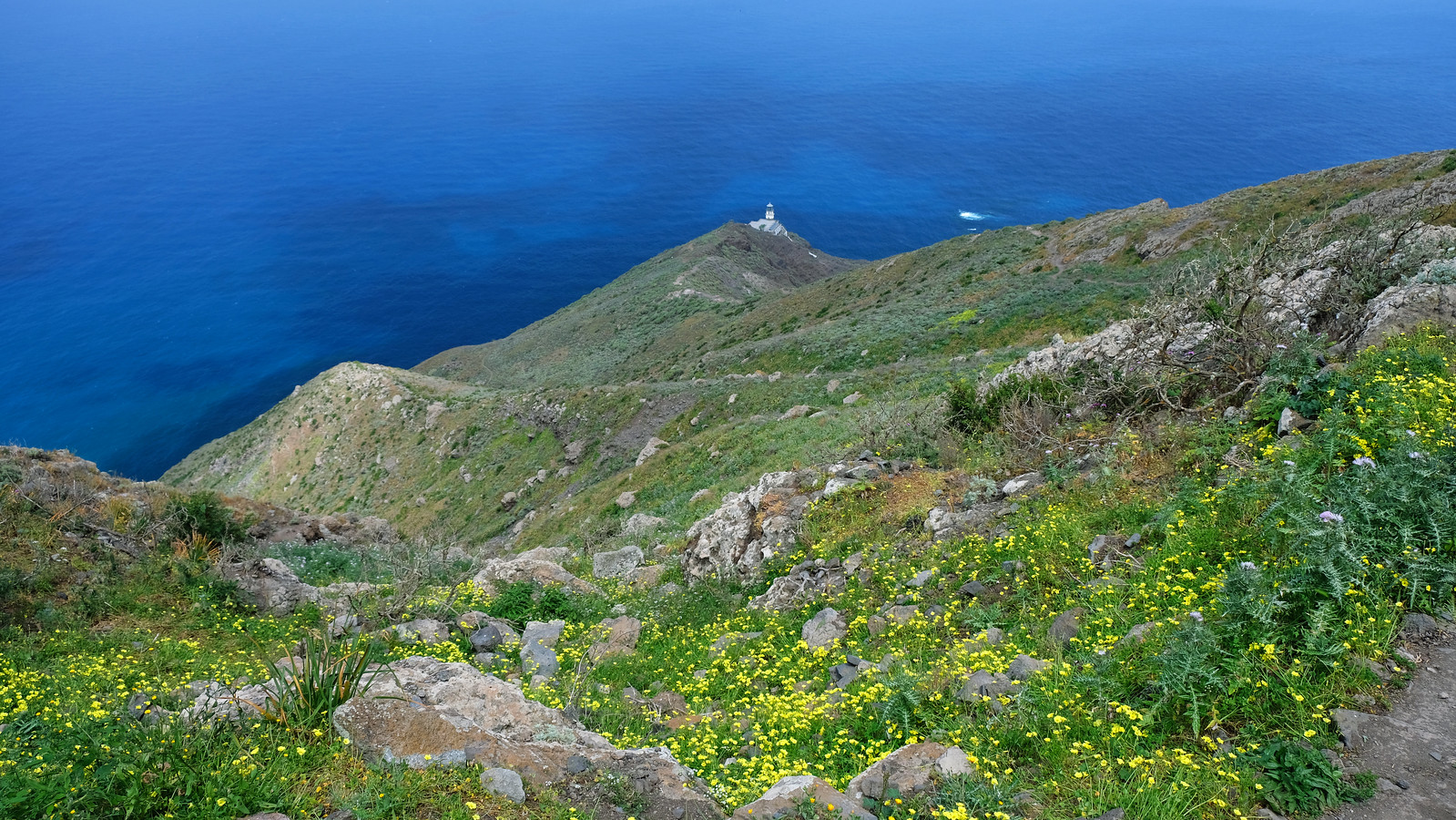 Because the trail goes steeply upwards from Anaga Lighthouse, into the green Anaga Mountains and the largest laurel forests in Tenerife. We found a somewhat larger plateau for a much needed rest before we left the coast. The trail becomes less steep from then on as it runs through the inland forests and the small mountain village of Chamorga. 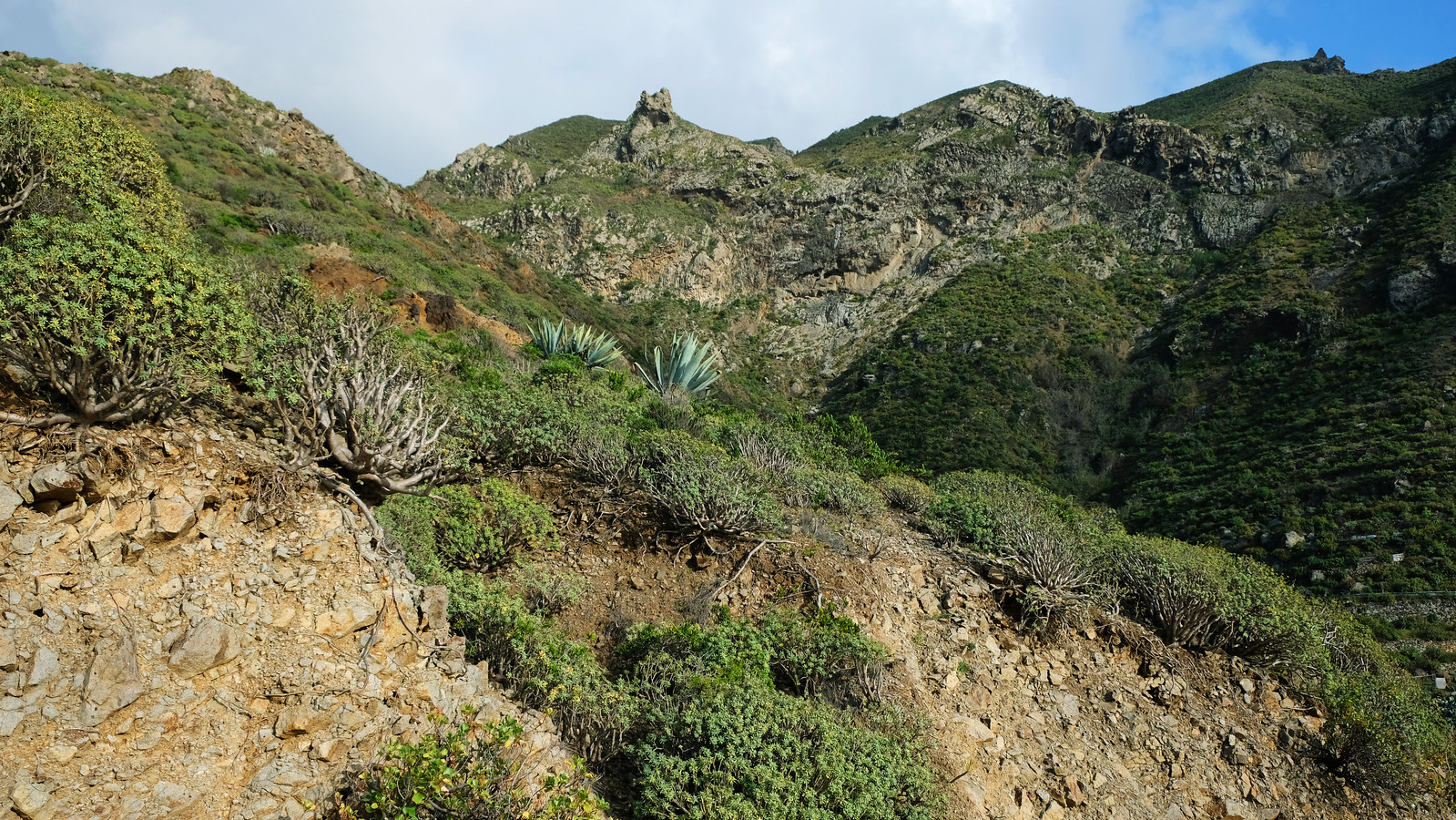 Chamorga even offers a restaurant to hikers, and then the trail starts to ascend from there again, but it’s still in the forest. Since Tomi was fed up being in the carrier for so long by then, we decided to take the trail down to El Draguillo instead of properly finishing the loop. This way we repeated the first section of our hike, but we knew Tomi could walk there, and we didn’t mind the coastal views either. However, we marked the loop trail properly on the map for you – scroll to the end of this post to check it. 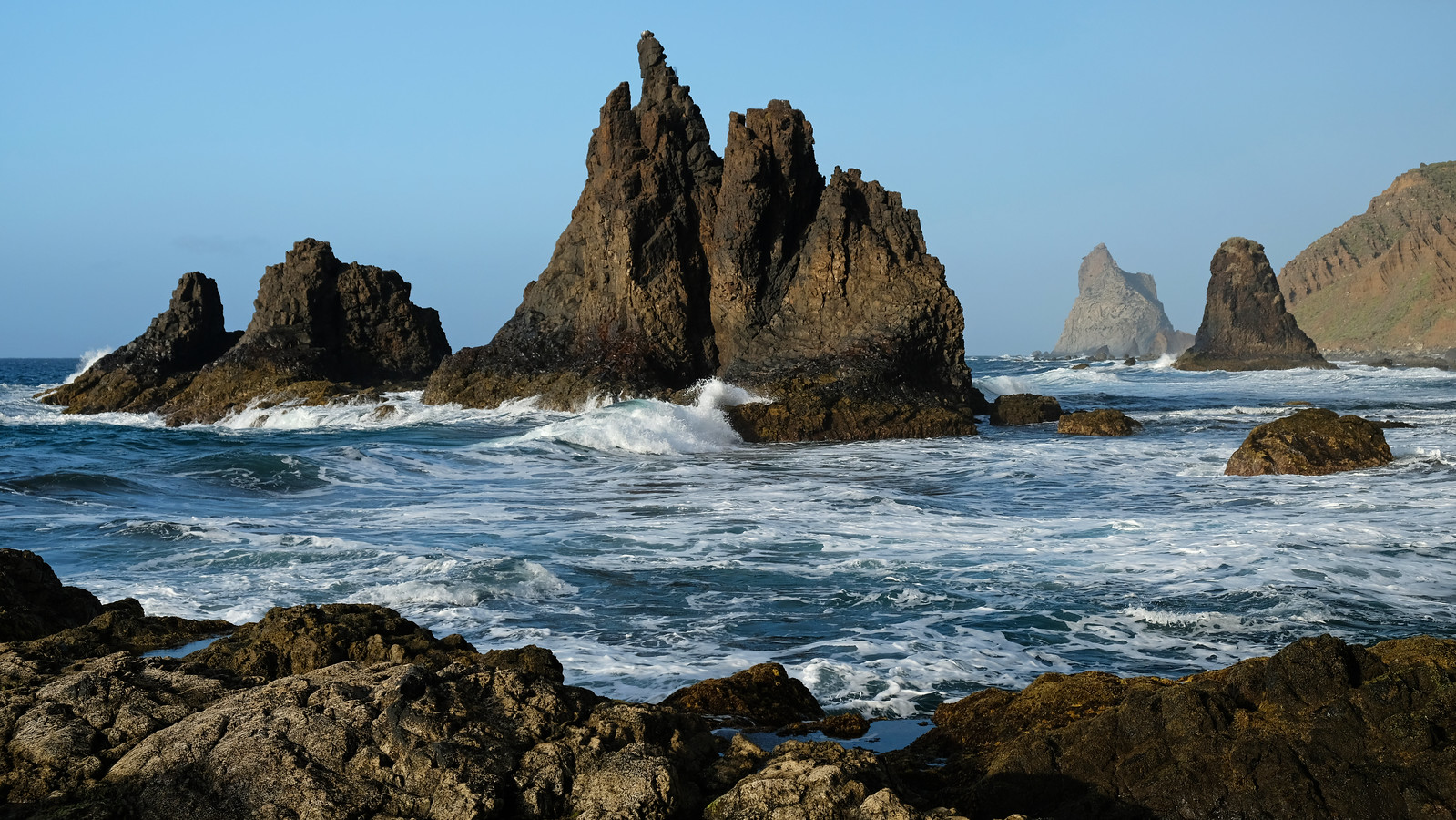 Either way you end up at the coast again, just above Benijo Beach. This time we grabbed our chance to walk down and enjoy the soft sand, large waves and photogenic cliffs this beach offers. We saw some people swimming, but Tenerife in March didn’t tempt us for a swim too often, that time neither.

Our favorite sunset was the one we caught at a viewpoint just at the top of the steps above Benijo Beach, the sun sinking down behind the majestic silhouette of the Anaga Mountains. 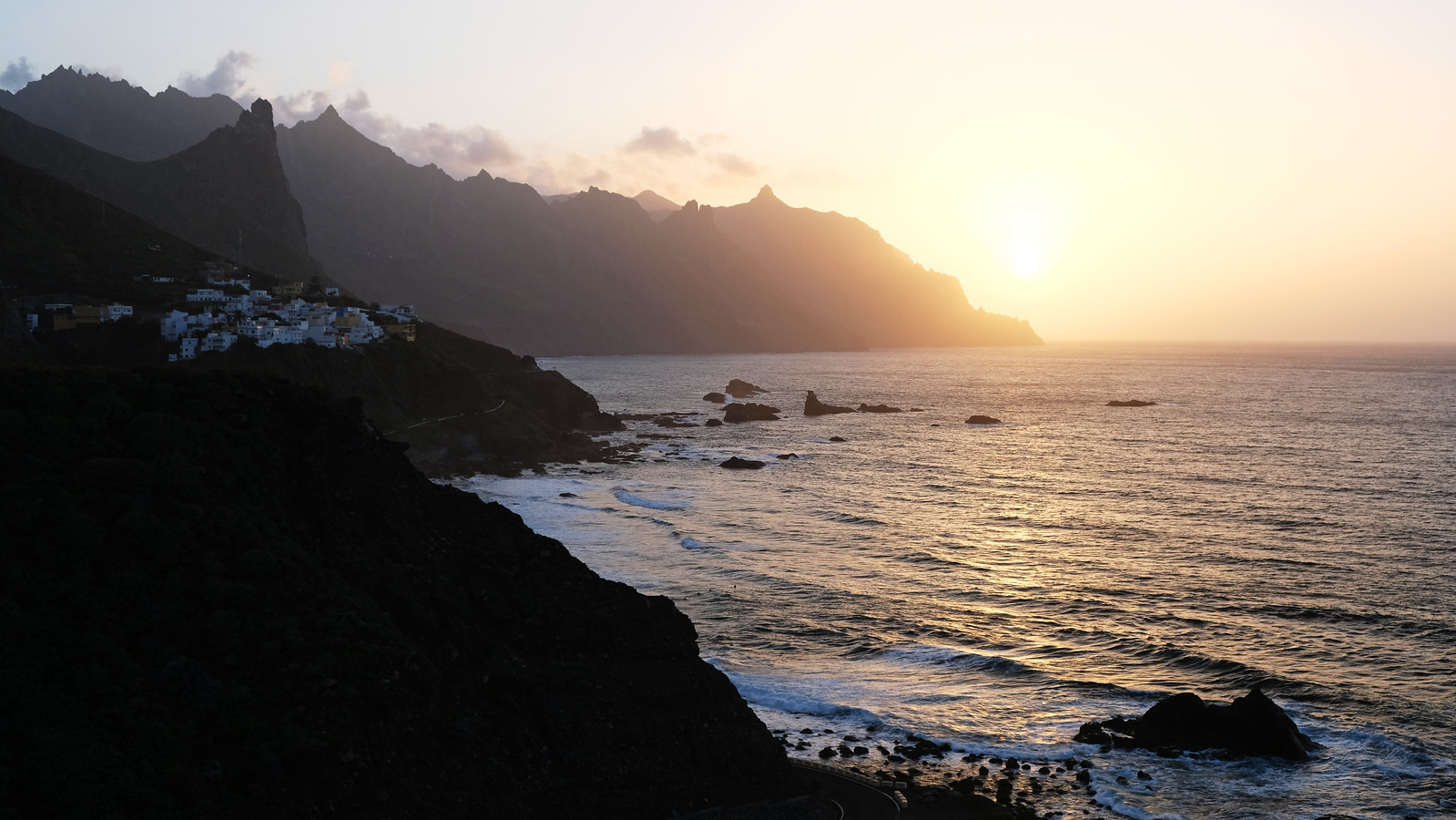