8 Croatian Beaches That Are Worth The Hype We’ve recently written a post about stunning Croatian beaches you’ve (probably) never heard of. And now we’d like to tell you about the famous ones. The ones that you’ve (probably) heard of or read about if you visited or planned to visit Croatia. But are they really that fabulous? Are they worth all the hype?

They are crowded. Even more crowded than what you imagine when hearing the word “crowded”. In high season, you can barely put your towel down anywhere on these beaches. There’s no space available. And most of them are not small at all. We’d even go as far as saying that the crowd makes these beaches unenjoyable throughout the summer, especially in July and August. We’ve successfully avoided Croatia that time so far. Our time to visit is September. And we enjoyed these magical beaches then!

Where have we actually been in Croatia? 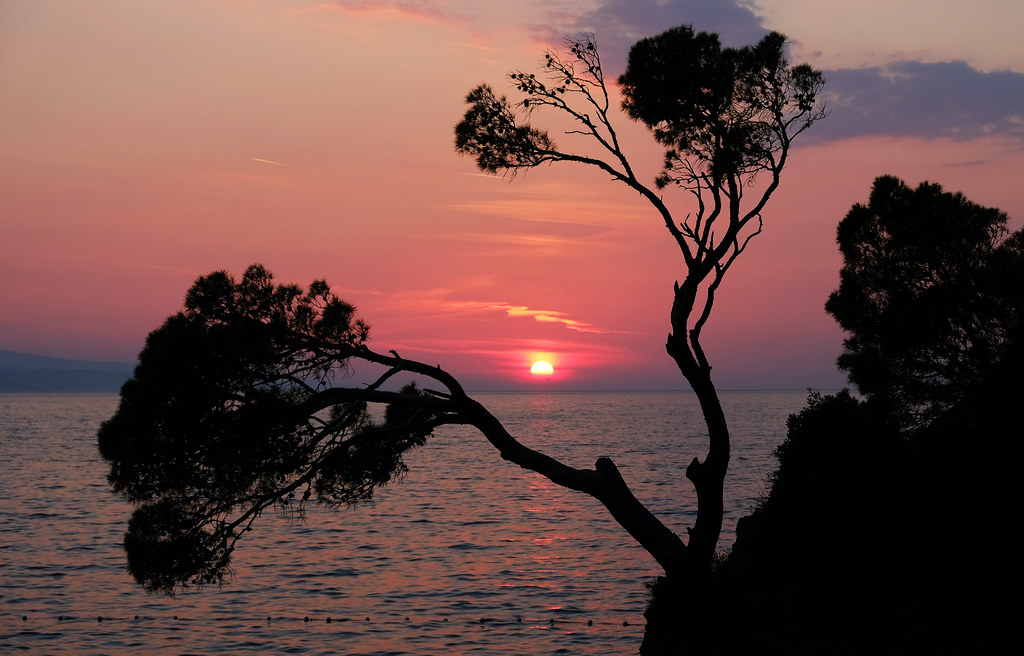 Of course, we haven’t been to all the famous beaches of Croatia, so this list is far from complete. But we’ve been to Istria, Kvarner, Central and South Dalmatia. We’ve visited quite a couple of beaches in each region. We’ve seen the beaches of Pula, Zadar, Split or Dubrovnik. We’ve been to the Opatija, Omiš and Makarska Riviera.

We’re yet to visit Zlatni rat, the famous Golden Horn of Brač Island, or any other beaches on popular Brač or Hvar Islands. Croatia has many islands. We’ve seen six of them so far: Krk, Pag, Vir, Kornati Islands (which consist of countless small islands, but now we count it as one), Mljet and Lokrum. I’ve previously been to Korčula and Rab Islands, too, with my parents.

So our list of the best beaches that absolutely deserve to be called as such is subjective and not exhaustive at all. Still, we’d like to show you, because they’re truly as fabulous as they’re said to be. Our only advice is: try to visit them outside of the high season. So let’s see: 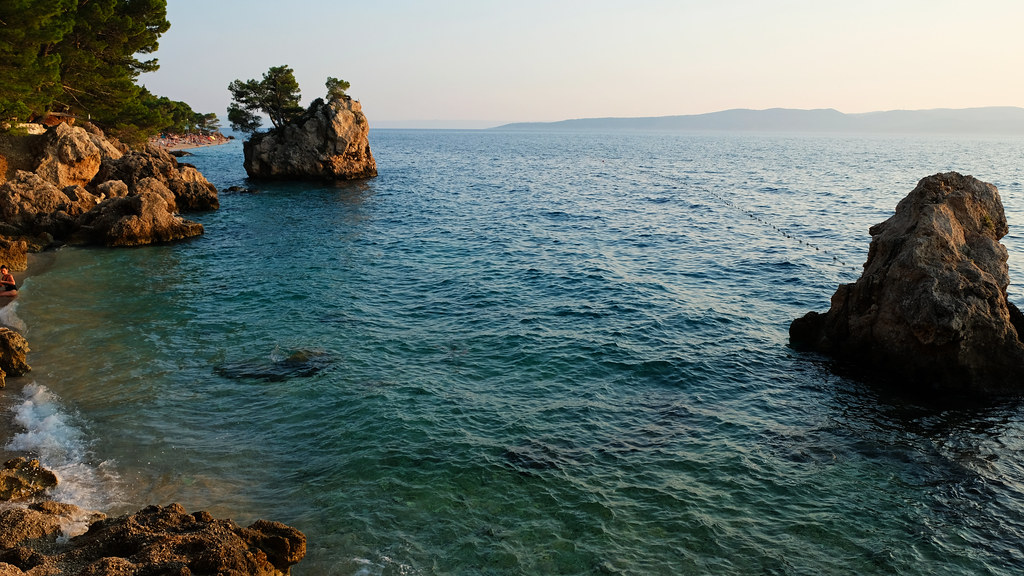 Makarska Riviera! A popular beach region, probably the most popular on mainland Croatia. Needless to say, there’s a good reason. Its beaches are usually pebbly, but these pebbles are small and smooth, they won’t hurt your feet. Rather they give the water a magical turquoise shade. Evergreen pine forests surround these turquoise bays, and the giant white cliffs of Biokovo Mountains tower above them.

Then add some fancy restaurants, seaside promenades and buzzing nightlife to those crystal clear waters and scenic beaches. You get the Makarska Riviera. And one of our favorite beaches there is not even in Makarska, but in the nearby small town of Brela. 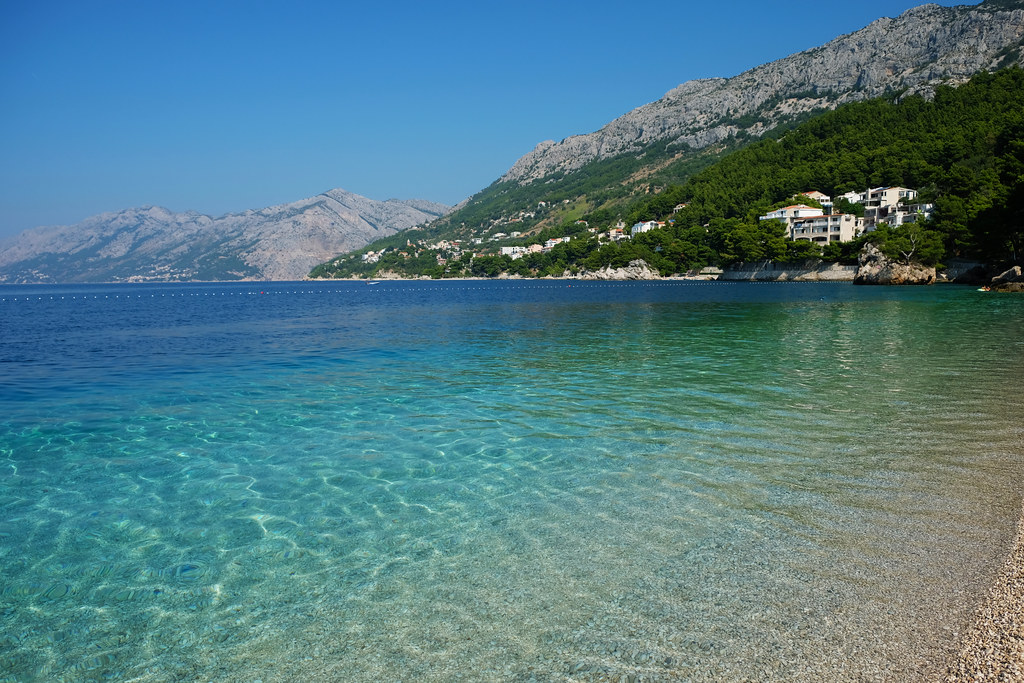 Brela’s Punta Rata Beach is a long one in the shade of the lush green pine trees. It even has an iconic pine tree that sits on top of a huge rock at the end of the bay. It’s a favorite theme of photographers, you’re not surprised, aren’t you? And yes, I couldn’t resist the temptation to take sunset shots with it either. Why should I? 😀

Punta Rata is considered a sandy beach in many articles, but it’s not really sandy. It has very fine, small pebbles, and they’re comfortable to walk on barefoot.

Oh, and finally, parking. It’s very expensive at Punta Rata. We could at least choose a daily rate (not hourly), but it was double the price of any daily parking fee that we paid in Croatia. If you plan to enjoy Punta Rata for several days, we recommend staying in Brela in an apartment that offers free private parking and is walking distance from Punta Rata. 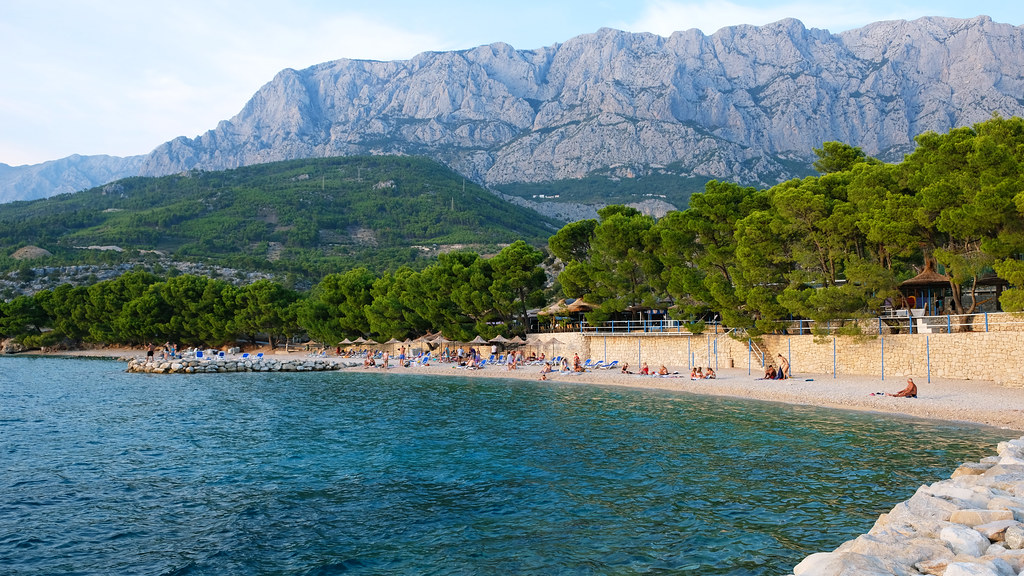 Okay, this is not one beach, but a series of them. At the foot of Biokovo Mountains Makarska is the center of the riviera that’s named after it. And it has stunning beaches!

Its Main Beach is one with an urban atmosphere, surrounded by hotels and restaurants. It’s not the type of beach we usually like, but it’s an exception. It’s large and pretty and… have I mentioned the view of the towering Biokovo Mountains? 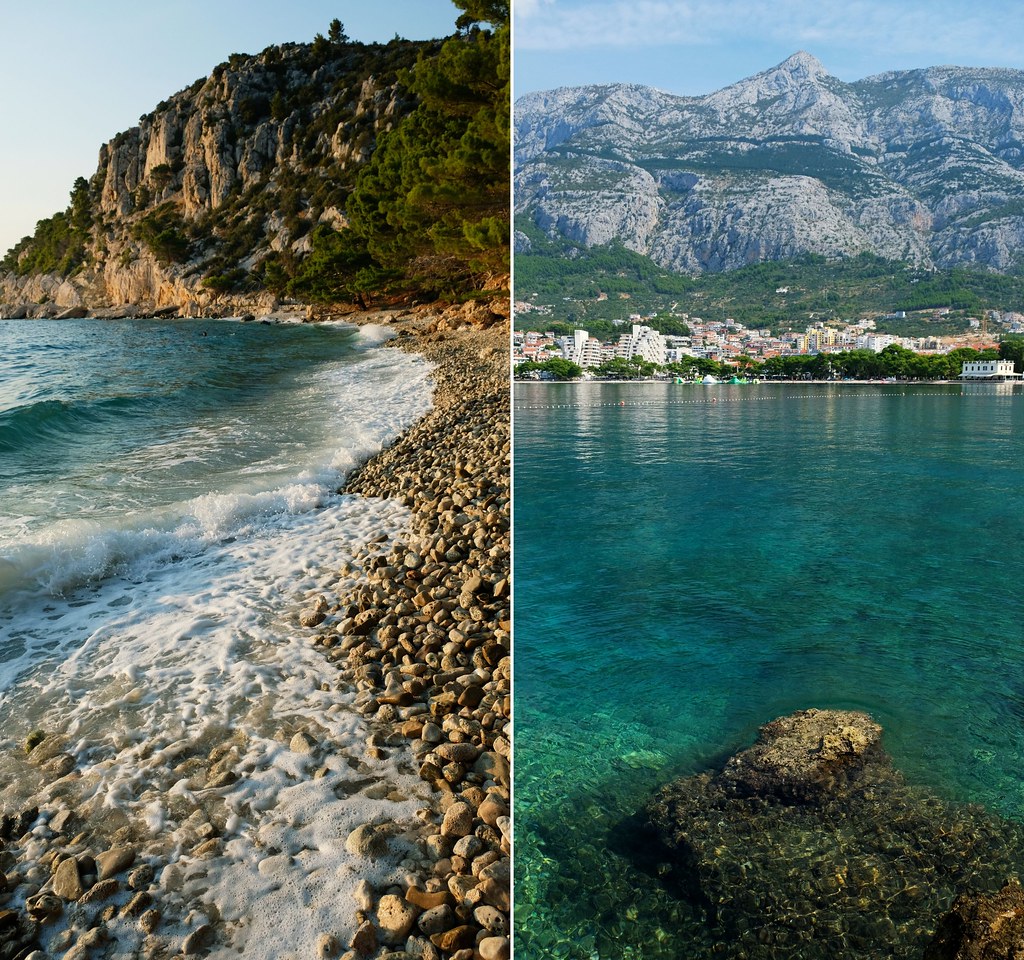 If you walk along the promenade, Main Beach is followed by several other bays. (In the other direction, there’s the harbour.) They have names – like Cvitačka Beach, Buba Beach, Ratac Beach -, but we never really checked the map to differentiate them. And they’re not that different either. Pretty pebbly bays (pebbles are occasionally mixed with sand) with pine trees, rentable deck chairs and mountain views in the back. We usually went to whichever we found the least busy, and we enjoyed them all.

Some of these bays are so small that they’re suitable only for one or two families. We’ve never found them free, even at the end of September. But we kept our two very favorites of Makarska’s wonderful beaches for the end. They’re actually at the end of Makarska, one is on the right edge of it, and one is on the left: Ramova Beach and Nugal Beach. 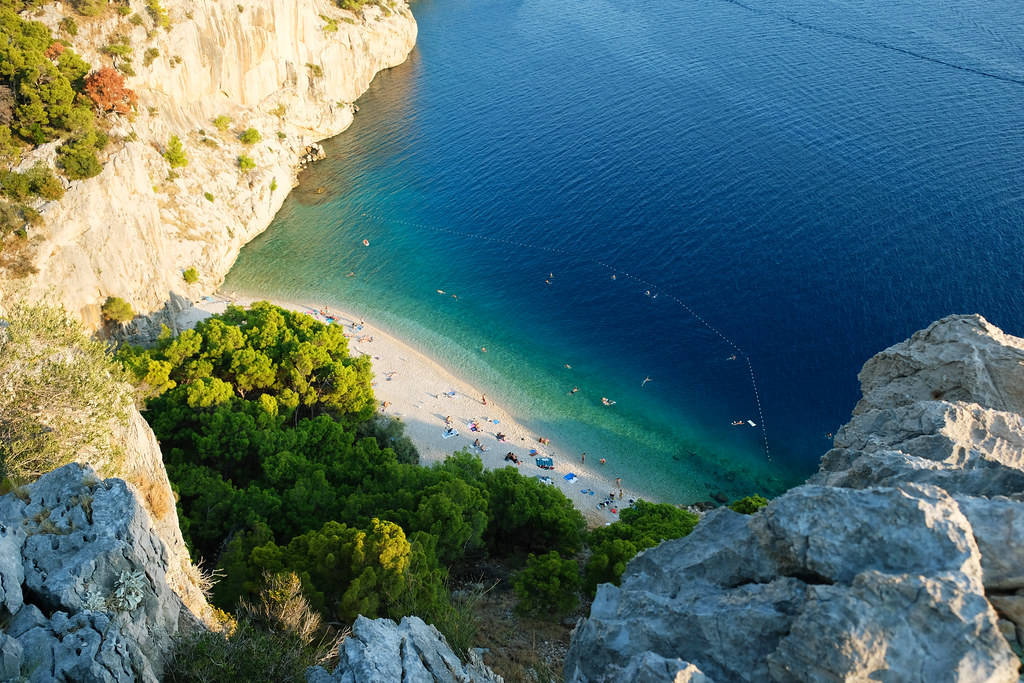 They have quite some things in common: you need to walk for them; the walk runs through a lovely pine forest; a giant rock wall is right behind the beach; nudists love them. And we love them, too, because they’re scenic and have a remote, out-of-town-lost-in-nature vibe. 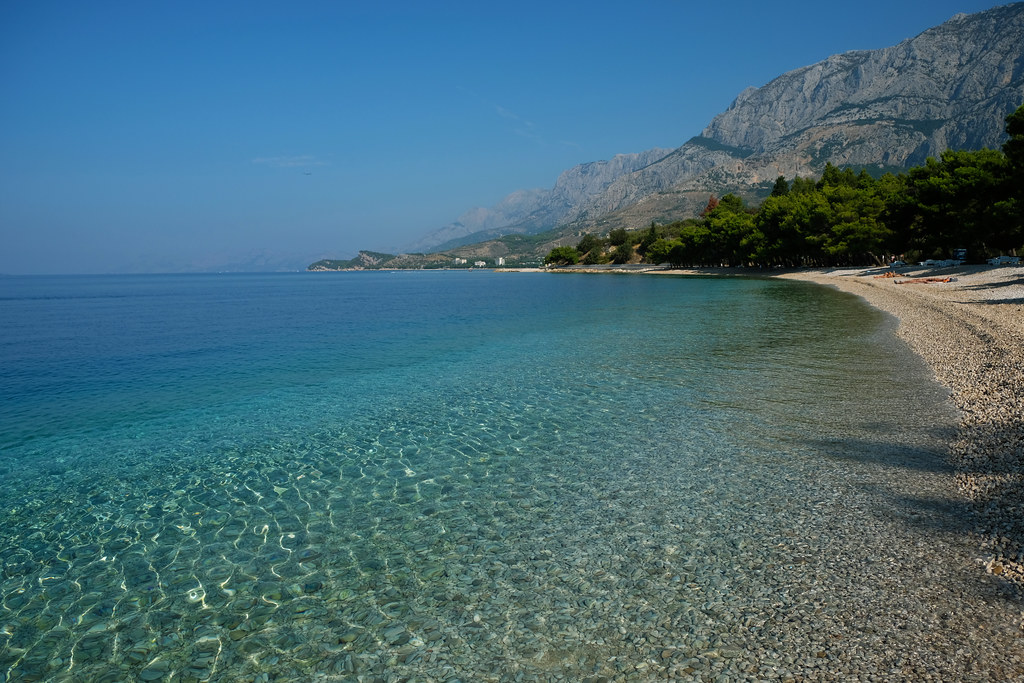 We’re still stuck at the Makarska Riviera, sorry. We really loved it that much!

Tučepi is a small town south of Makarska and offers the longest beach of the Makarska Riviera. Kamena Beach is an almost 4 kilometres long beach with fine pebbles and grand views of the Biokovo Mountains. There’s a long promenade behind the beach with bars and restaurants. Does it sound like it’s similar to Makarska? It is. But it’s how all sunsets or all waterfalls are similar. Still we wouldn’t give up on any of them. 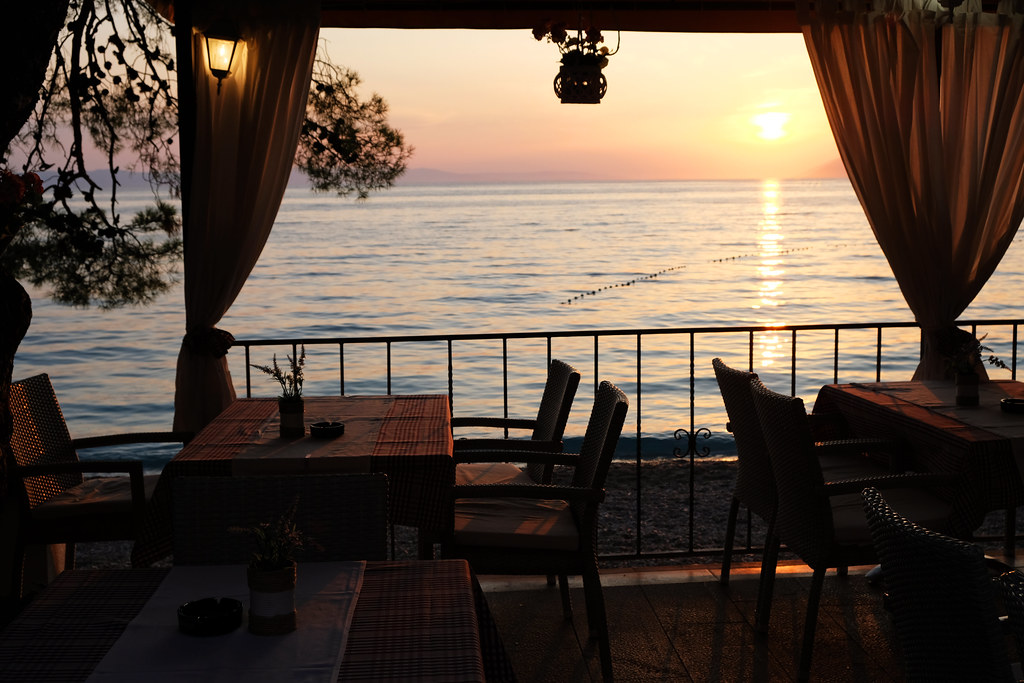 A note about parking: it’s usually expensive at any beaches on the Makarska Riviera, but at Kamena Beach we had a problem finding a parking lot at all. We ended up driving out of Tučepi and parking by the road. There were pullouts and a few designated parking spaces that actually belong to a nudist beach. Walking on the beachfront we were not far from Kamena Beach at all, it took about 15 minutes to get there. 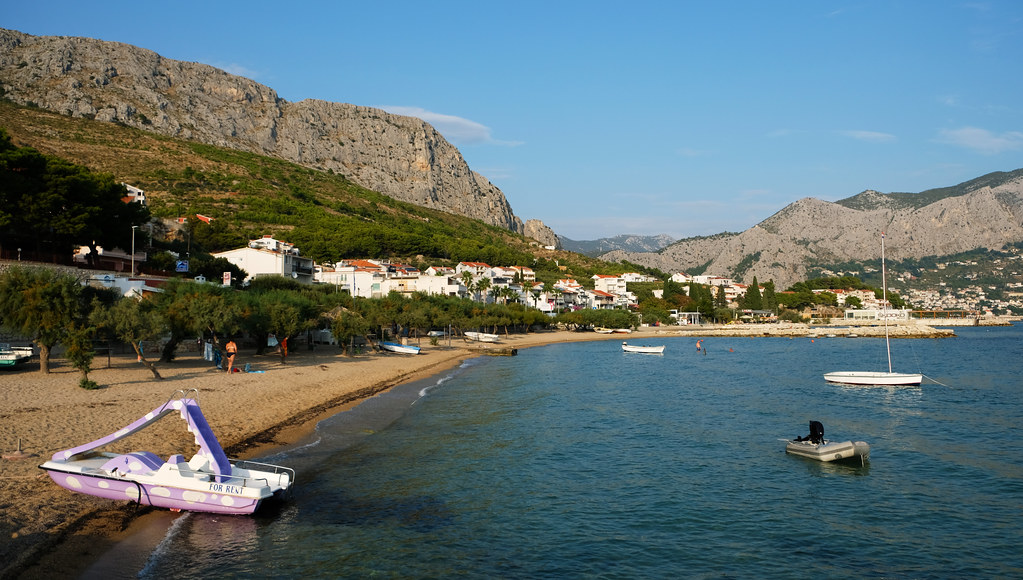 Croatia is not particularly famous for sandy beaches. It only has a few, and those are not the most spectacular ones. However, that doesn’t mean you can’t find pretty sandy beaches. You can find lots of them on the Omiš Riviera!

Our favorite one is Duće Beach, located in the small town of Duće right next to Omiš. Actually, it feels more like a holiday district of Omiš than a different town. Duće has several bigger and smaller sandy bays following each other on the coastline, but the quality of sand differs. Some bays have rough sand, some have sand mixed with pebbles. The main beach, Duće Beach has probably the softest, finest sand of all. Trees are also planted on the beach so that you have some shade, and the views of the mountains behind make this beach quite picturesque. 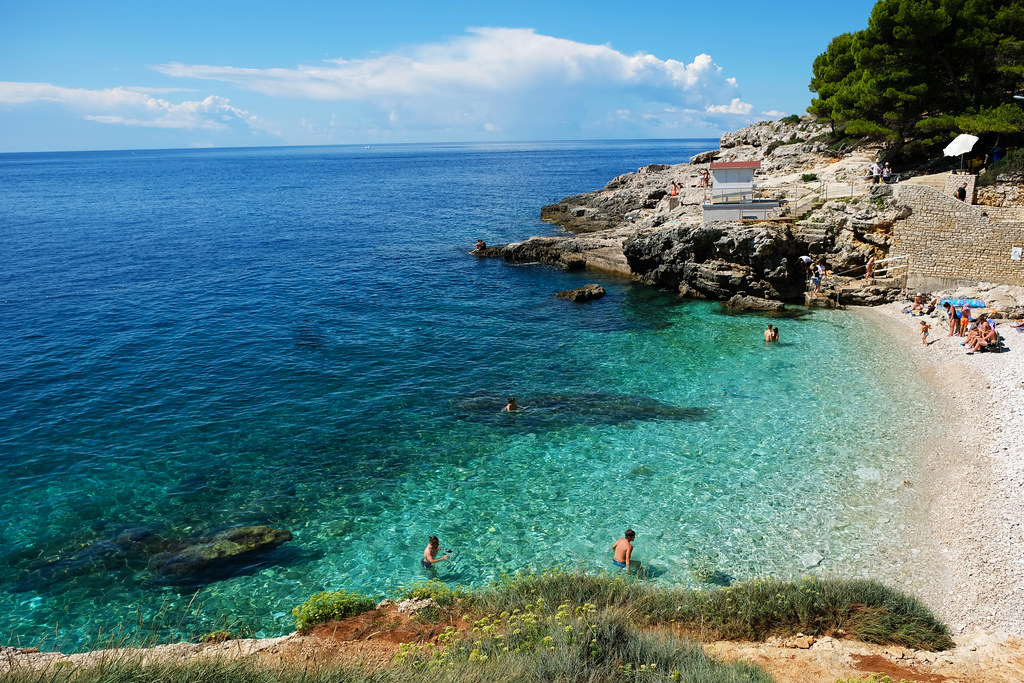 The Hawaiian Cove of Pula might not be the most famous beach in Istria, but it’s one of the well-known ones (it’s located in Pula, after all), and we loved it very much. Luckily, it’s not your usual city beach. You can find it at the tip of Verudela Peninsula which is quite far from Pula’s center. Surrounded by Hotel Park Plaza, pine forests and other coves, we didn’t feel like being in a city at all. And Hawaiian Cove Beach offers clear, magically turquoise water! 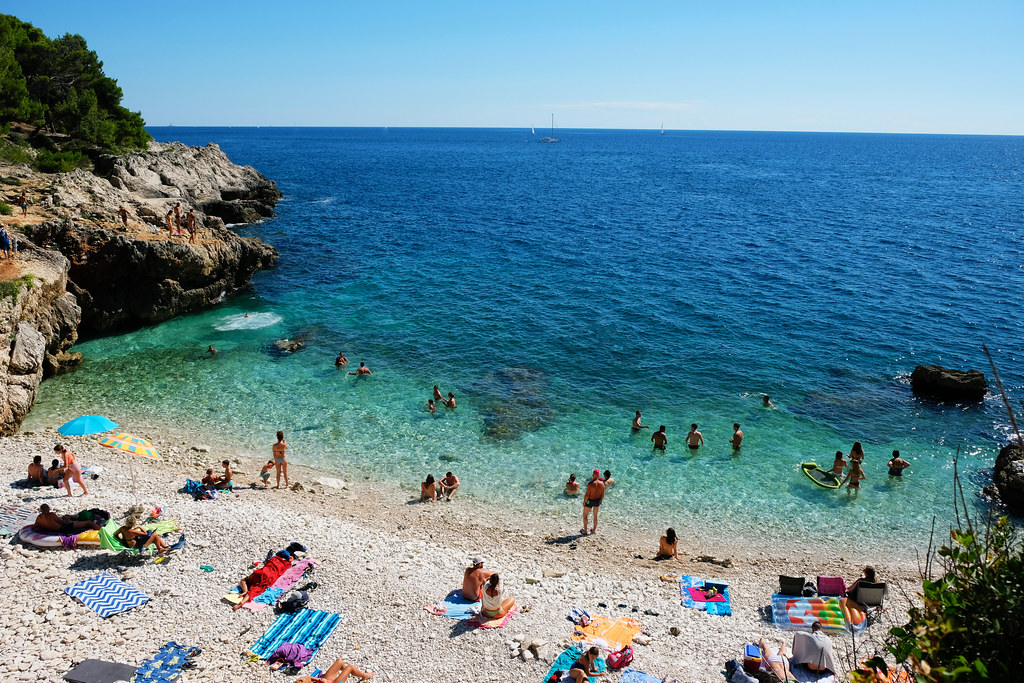 The beach itself is not very large, so it can easily get crowded on summer days, especially weekends. We’ve actually been there on a Thursday in early September, and it was comfortable then – far from empty, but not crowded either.

We also liked the coastal walk towards Brioni Beach. The path on the top of the large rocks rewards with nice sea views, and we also explored a narrow, steep and pretty cove (where it’s not possible to get down to the water, so you can’t swim there).

Parking was surprisingly easy, because there’s a giant, free parking lot at the Pula Aquarium which is about 10 minutes walk from Hawaiian Cove Beach. And why the name? We’re not sure. Because it’s pretty…? Like Hawaii? 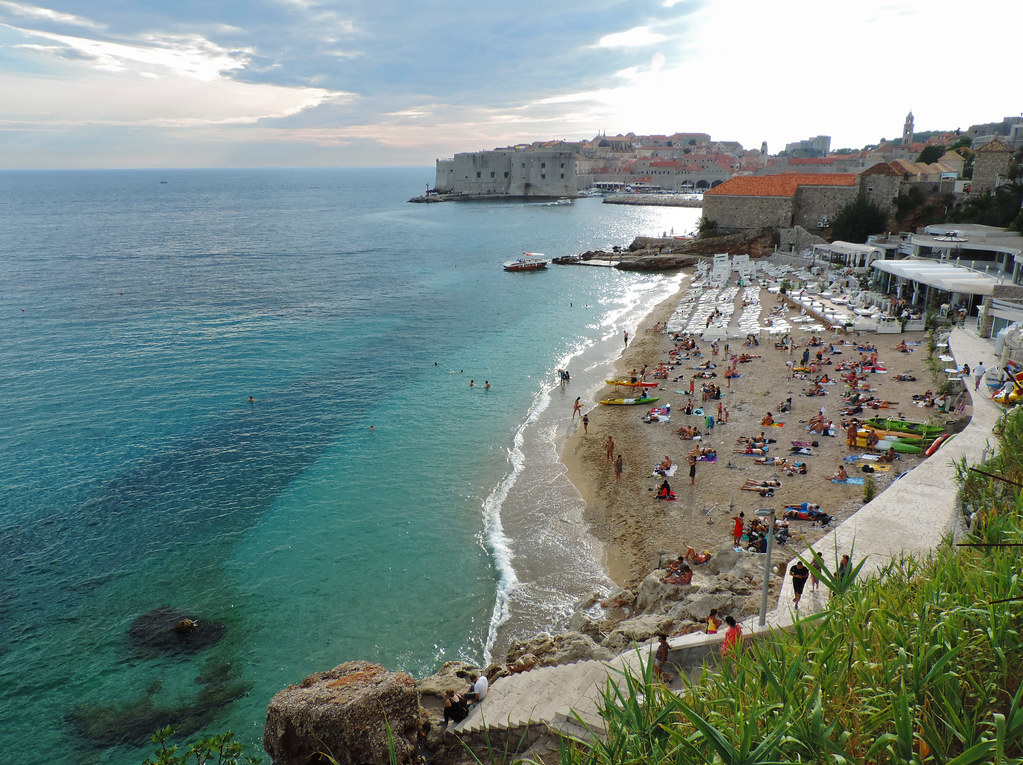 Banje Beach got on this list because of the fabulous views it offers of Dubrovnik’s Old Town. Parking is a hassle, people are usually packed like sardines on this relatively small, pebbly beach, and the bay itself looks like an average bay on the Dalmatian Coast (which doesn’t mean it’s not nice, they’re all quite nice).

But we’re still happy that we walked to Banje Beach from Dubrovnik’s Old Town for a short swim, because we enjoyed the views so much! Also, we visited it in September, only had a backpack and a towel with us, and it was a couple of years before, so we didn’t mind the crowd much.

Nevertheless, Banje Beach is one of those few centrally located city beaches that we actually like. We didn’t like Split’s Bačvice Beach nor the beaches we’ve seen around the old towns of Rovinj or Zadar. They look too urban and busy, and some are not natural beaches either. I know it’s a question of personal taste, and it’s the great views that saved Banje Beach in our eyes. 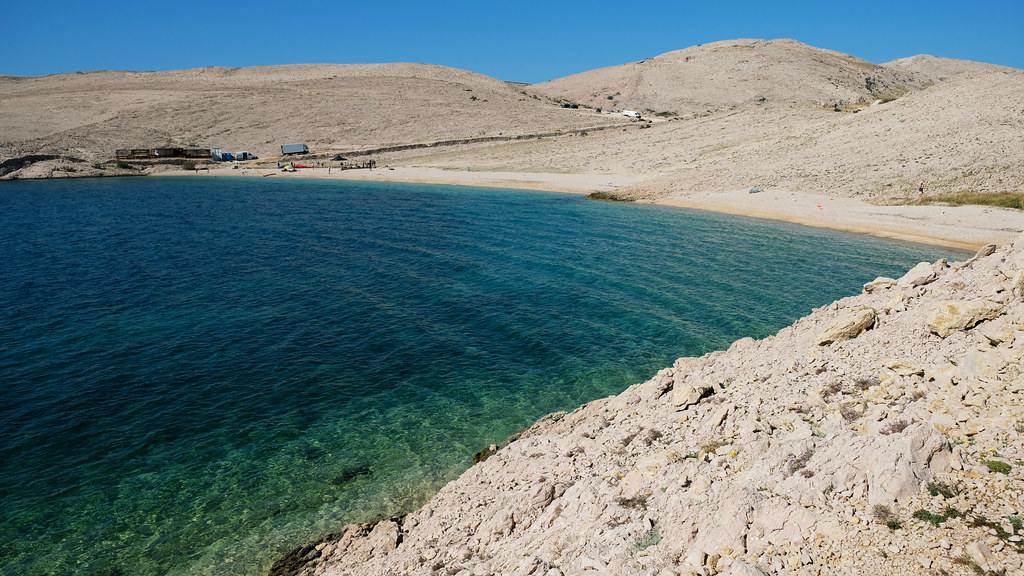 Imagine a bare, rocky landscape that looks like planet Mars and an incredibly turquoise bay that tempts you – and there’s no need to resist. This is Ručica Beach on the island of Pag. It’s one of the most famous beaches of Pag, and it definitely deserves to be. Though we have to confess that we like nearby Beriknica Bay even better, Ručica is a close competitor. 🙂 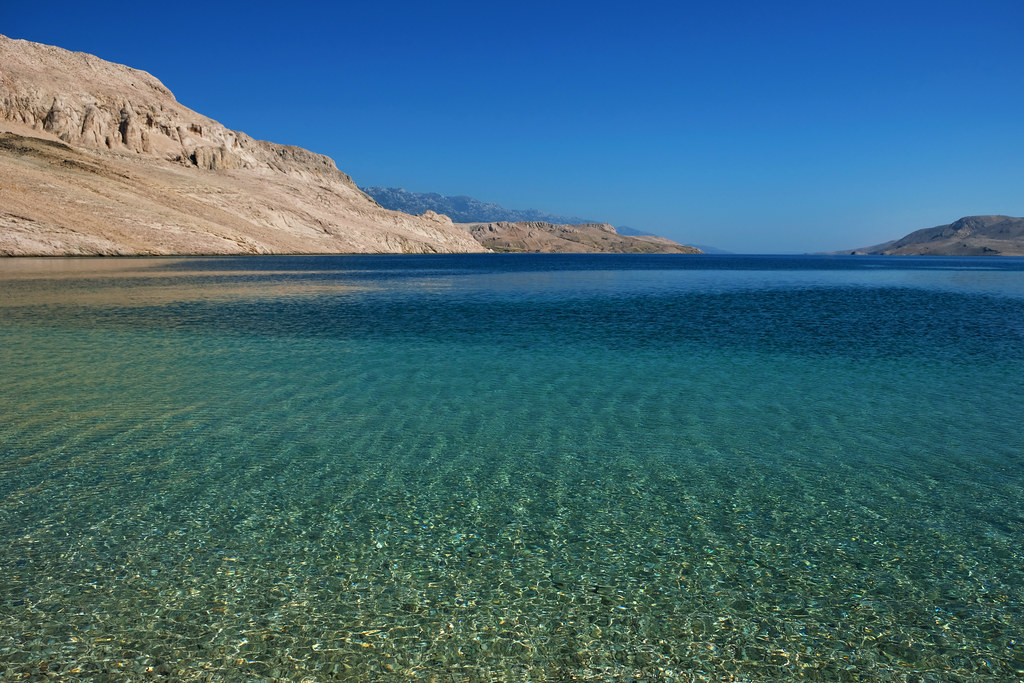 It’s a pebbly beach, but pebbles are so small that at some places they’re close to rough sand. It’s comfortable to walk barefoot on the beach, and our little Tomi enjoyed playing in the “almost sand”.

Parking is free after you drive the narrow, dirt road to the large parking lot at the back of the beach. And once you’re there, it’s worth walking on the trails at each end of Ručica Bay. One leads to neighboring Beriknica Bay, the other to the town of Metajna, and both offer pretty views of the rocky landscape and the deep blue bays of the Adriatic Sea. 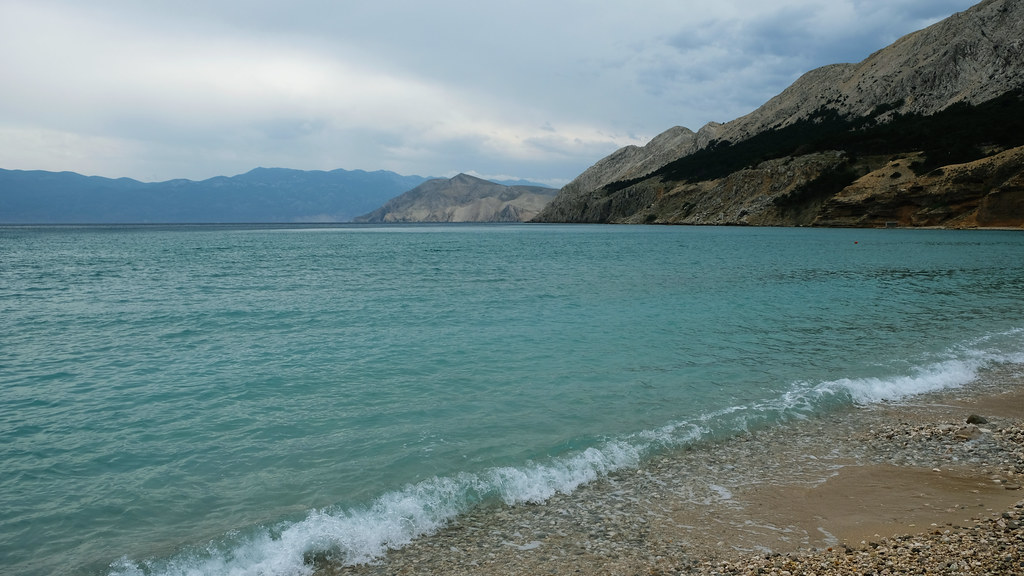 Baška Beach might not be that famous all over Croatia, but it’s definitely one of the most popular beaches on Krk Island. It’s on the scenic, rocky southern part of Krk, and it’s a large, pebbly and often quite windy beach. The water is perfectly turquoise, and we got views of the uninhabited island of Prvić. For even better views of Prvić and the dramatic rocks above Baška Beach we did several coastal hikes, eventually all the way to Vela Luka Bay. 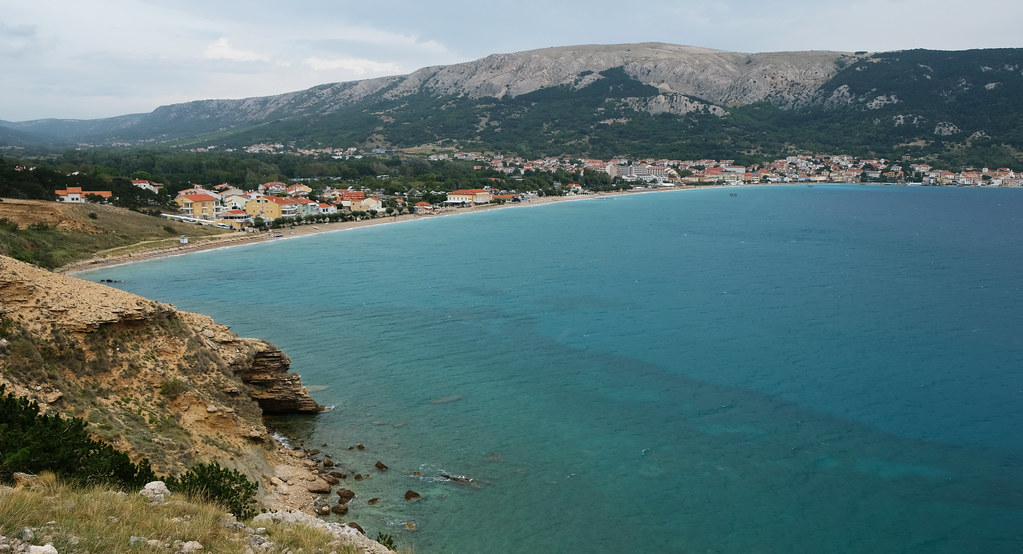 Parking in Baška is quite limited though. There are paid street parking, and some paid parking lots where you can choose hourly or daily fees.

Have you been to any of the famous Croatian beaches? Did you like them?