California’s Lassen Volcanic was the first volcanic park we’ve ever visited. It was also one of the many proofs for us that California is a uniquely diverse and beautiful state. (Like we had any doubt about it, ever.) In this post we show you why not to miss this park via our favorite hikes.

Not that it was on our California bucket list. Lassen Volcanic National Park was one of those ones that were not, we simply didn’t know about it before we moved to California. But looking back we’d absolutely add it to that bucket list! Hike it, smell it, get impressed and never forget it.

What makes this volcanic park so special?

Well, other than its pure, untouched beauty? The variety of volcanoes and the impressive remnants of volcanism that you can find all over the park! Don’t worry about erupting volcanoes though – or should you? Volcanism is actually still active in the park.

All four types of volcanoes found in the entire world are represented in Lassen Volcanic: a shield volcano (Prospect Peak), a plug dome (Lassen Peak), a Cinder Cone (the same name, Cinder Cone) and a composite volcano (Brokeoff Volcano). Learn about them in natural history museums, and then come and find them in the park.

The enormous lava dome of Lassen Peak can be seen almost from anywhere in the park. It’s an active volcano, and its last powerful eruption was in 1915. It’s only been sleeping since then, and a lot of things are going on deep down. The most visible signs of this volcanic activity are the hydrothermal areas in the park. Nonetheless, Lassen Peak is covered with snow almost year round. 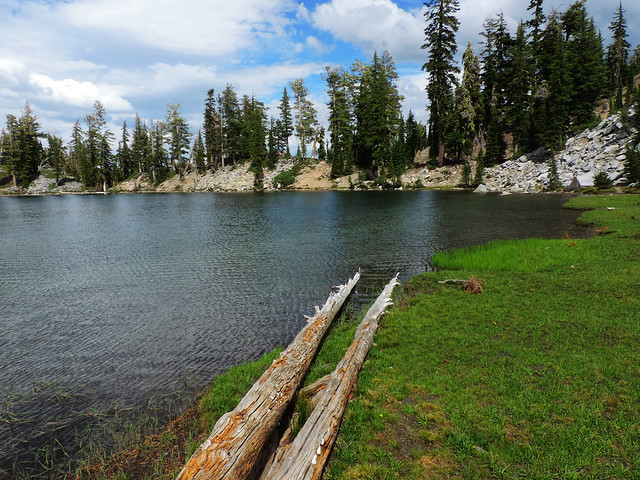 Lassen Volcanic is not a huge park (at least by US standards), but in addition to its central area (Lassen Peak, Bumpass Hell, Manzanita Lake), there are several more remote areas, too, which are worth a visit. Our favorite is the Butte Lake area, because of the incredible hike to Cinder Cone!

Talking about incredible hikes, here’s our favorites to whet your appetite for this lesser known fascinating park… 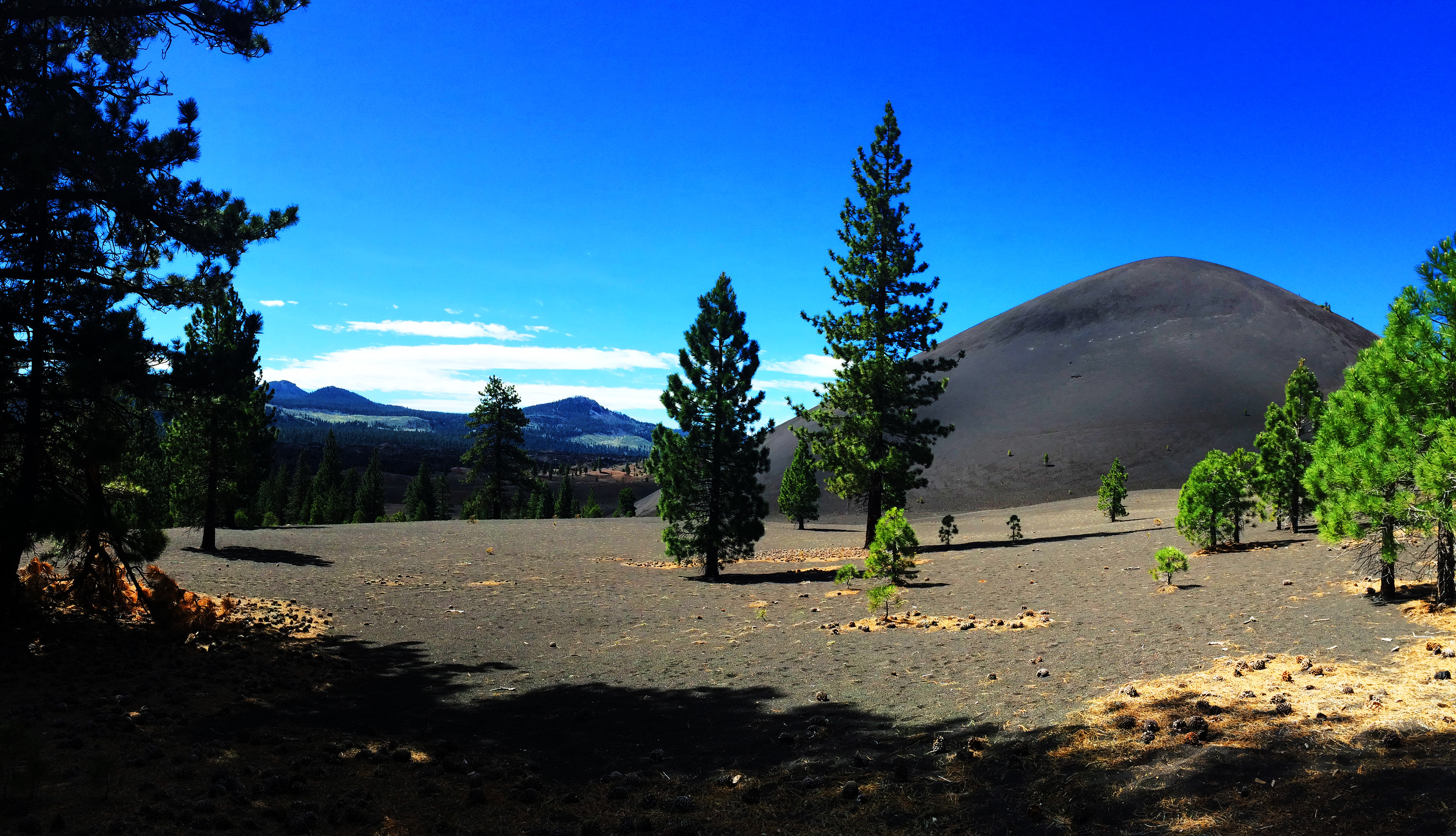 Hiking to the top of Cinder Cone is the most unique and memorable hike we’ve done in Lassen Volcanic. Actually, it’s among our favorite hikes in the USA, too. Cinder Cone looks exactly how we imagine a volcano, and if that wouldn’t have been enough, we could also hike down to the bottom of its crater.

Of course, to get to the crater we had to hike to the top first. We could see how things have changed since the eruption in the 1600s, but the lava beds around Cinder Cone are still there, and there’s still very few plants to be found. We hiked in the volcanic ash at the side of Cinder Cone, and the steep trail rewarded us with thrilling views of a very special landscape formed by ash and lava: the Painted Dunes and the dark black lava beds. Several lakes and even Lassen Peak could be seen from the top of Cinder Cone. It’s a special, tiring, dirty and beautiful adventure!

Cinder Cone is not in the central area of the national park, but in the more remote Butte Lake area which is accessible by an unpaved, dead-end road. But it was totally worth it to get ourselves and our car dirty. 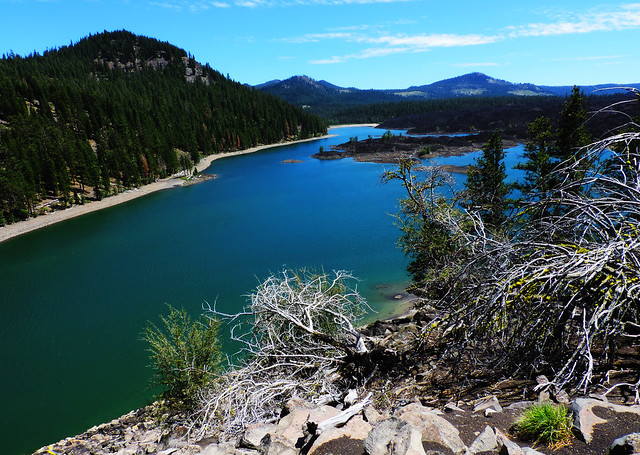 This fabulous and easy hike around wonderfully blue Butte Lake is our favorite lake hike in the park. The trail runs along the lakeshore under the trees, and the views of the lava beds and Cinder Cone make it even more special. Hiking Cinder Cone and then chilling out at Butte Lake makes for a perfect day in our opinion.

Hiking to the top of Brokeoff Mountain is probably the toughest hike we’ve done in Lassen Volcanic, but it rewarded us with stunning views all the way!

First, this trail runs through open meadows that were abundant with wildflowers at the end of June. Then we continued on rockier terrain with views of the surrounding peaks, even Mount Shasta covered in snow in the distance. We also found some snow at the top which shouldn’t be surprising, as the snow free season here lasts only from July to August. The panorama at the top really rocks, it offers a great view of the old Brokeoff Volcano caldera. 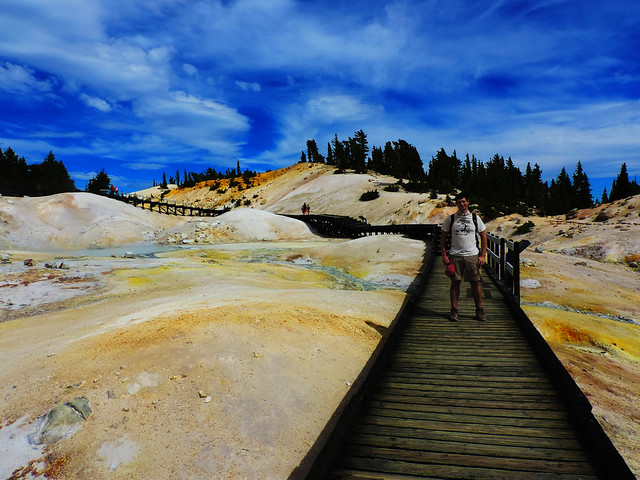 Bumpass Hell is the largest and most interesting hydrothermal area in the park. With its hot springs, steaming fumaroles, boiling mud pots and that typical rotten egg smell, it’s a living book to learn about volcanic activity. We could access it safely on a boardwalk, and it’s forbidden and very dangerous to leave the trail and walk elsewhere in hydrothermal areas. You don’t want to accidentally find yourself in a hot spring with a temperature of 150+ °C, right?

As for the rotten egg smell, it was part of the experience for us, so it was fun. But you can only smell it in the hydrothermal areas and not in the whole park, so don’t worry about it ruining your picnic. 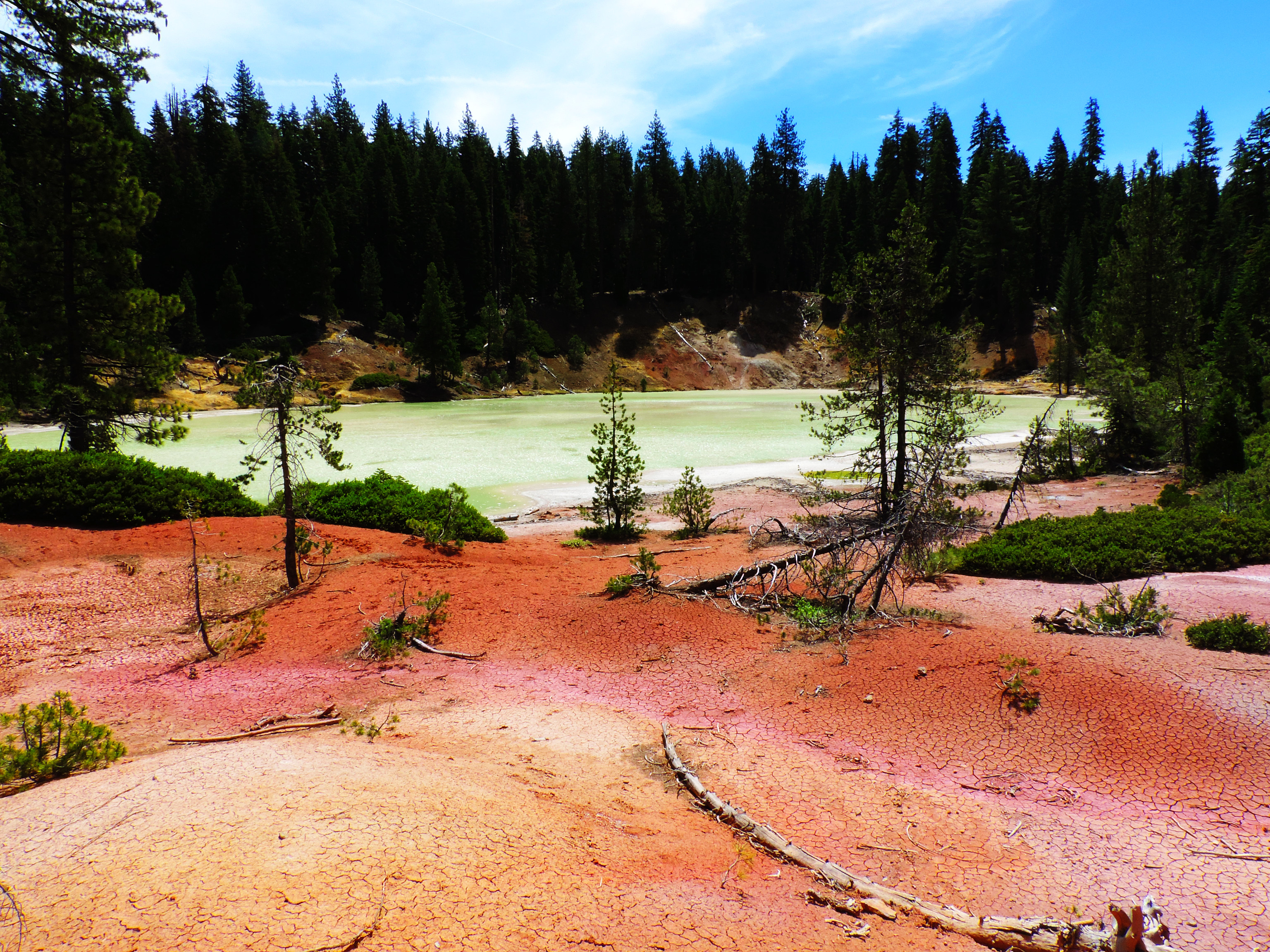 Surprise, this easy and nice hike through the forest led us to a boiling lake! The landscape suddenly changes when you reach the lake: the ground there is vivid red, the lake itself is green, and there are several fumaroles and mud pots around it. The temperature of the water reaches 125 °C – it is really boiling. It’s accessible by a short hike from Warner Valley Campground.

The trailhead for Devil’s Kitchen starts at the same place as Boiling Springs Lake Trail. It leads to a hydrothermal area, and it’s a 4.2 miles round-trip. Its steaming fumaroles and boiling mud pots are quite cool, hence the name. Though it can’t compete with Bumpass Hell, that’s much bigger and more fascinating, Devil’s Kitchen is less crowded. Plus, it’s super close to Boiling Springs Lake which is definitely not true for Bumpass Hell. 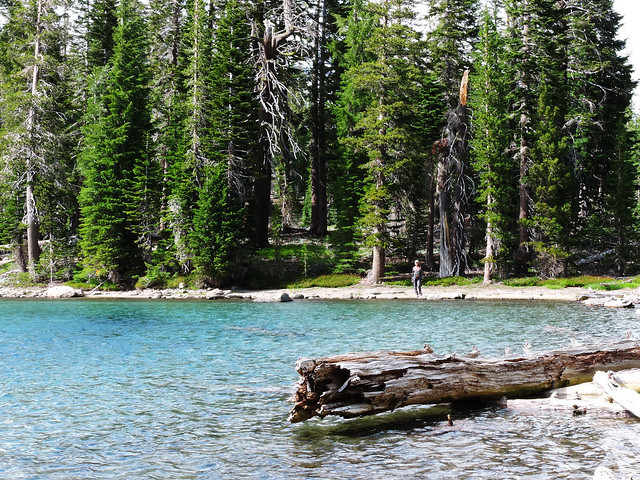 This trail in the central area of the park is the photographer’s dream: three crystal clear lakes with contrasting colors, one after the other! Though we have to admit we’ve seen only two of them. Fellow hikers told us that the third lake is dried out, so we decided to chill out at Shadow Lake instead of doing the final part of the hike. 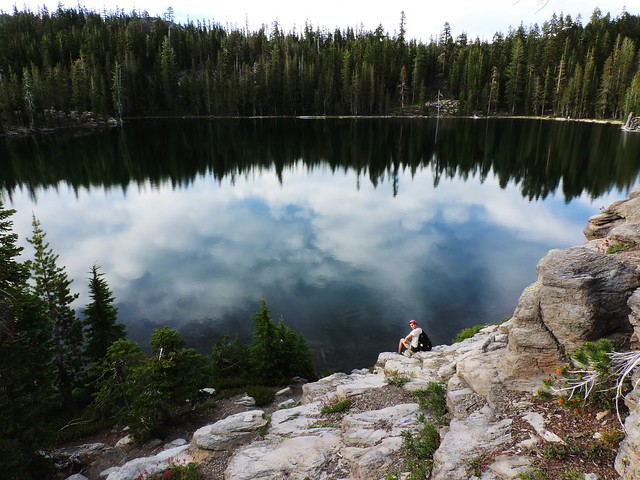 The hike to Crystal Lake is very short, but you know, size is not everything. Or length. Whatever. We really loved this hike, because it was so peaceful. It’s located in the more remote Juniper Lake area, and once you get there I bet you’ll start with a picnic at Juniper Lake- and you’re right not to resist that. 🙂 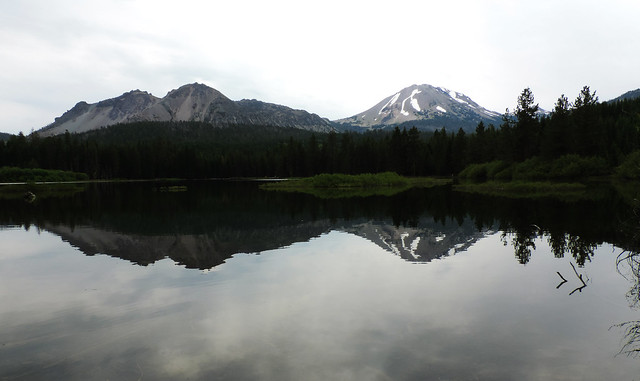 Finally, this easy loop around Manzanita Lake is rather a walk than a hike, but it rewards you with views of Lassen Peak reflecting in the lake if the weather is calm. Plus, you may find some playful squirrels and ducks for your entertainment. 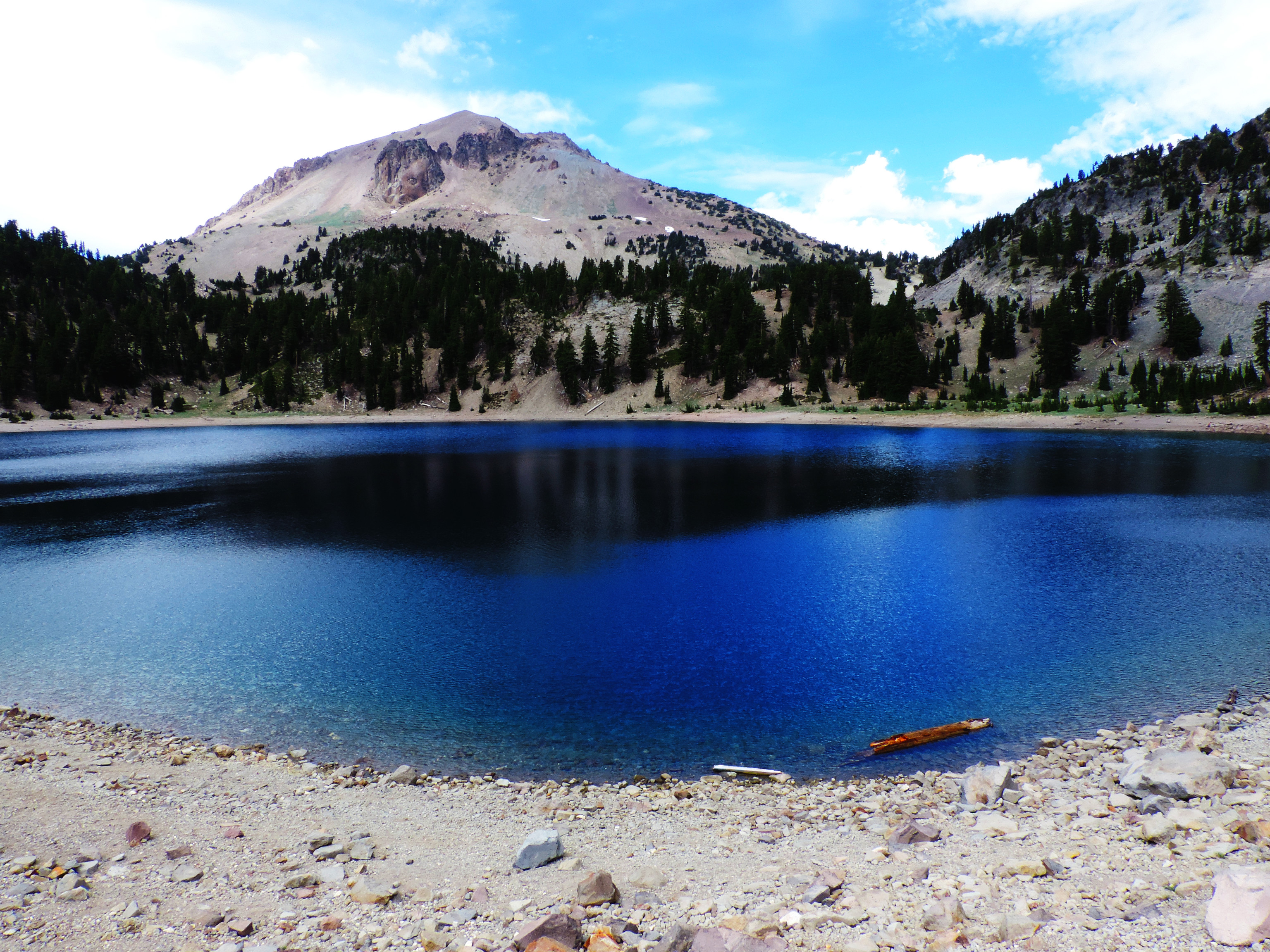 Where to stop for a picnic or just some nice views if you don’t have time for another hike? Our favorite spot was Lake Helen, a perfectly deep blue lake just south of Lassen Peak, and right next to the road.

It’s not the only pretty lake so close to the road though. We also loved Emerald Lake and Summit Lake in the central area of the park, Butte Lake and Juniper Lake in the west area. 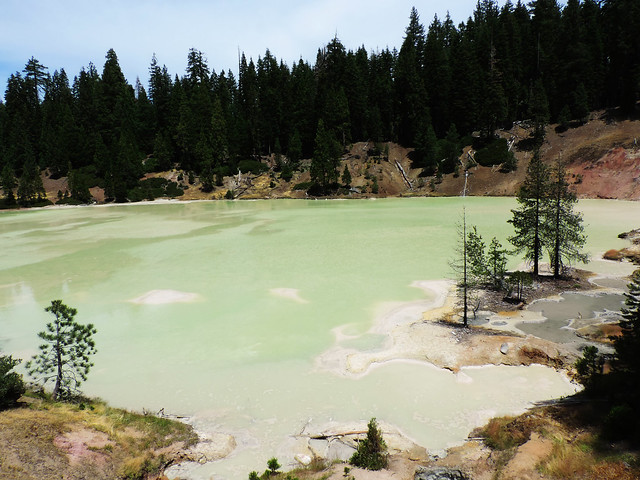 There’s one and only lodge (Drakesbed Guest Ranch) and several campgrounds in the park. This lodge is expensive and busy, as you can expect, so you better book it well in advance, or search for something in the nearby towns.

We are not the passionate camper kind of people, we prefer having a cosy bed and a bathroom, so we ended up staying in inns which are closest to the area we planned to visit. Red Bluff or Redding can be an option if you visit the west side of the park. Chester or Susanville are options for the east side.

Expect to drive about an hour to the park and back from these towns. Still it was worth it for us as we could book cancellable rooms for a reasonable price. On the other hand, it takes time to go from one place to another in the park anyway. 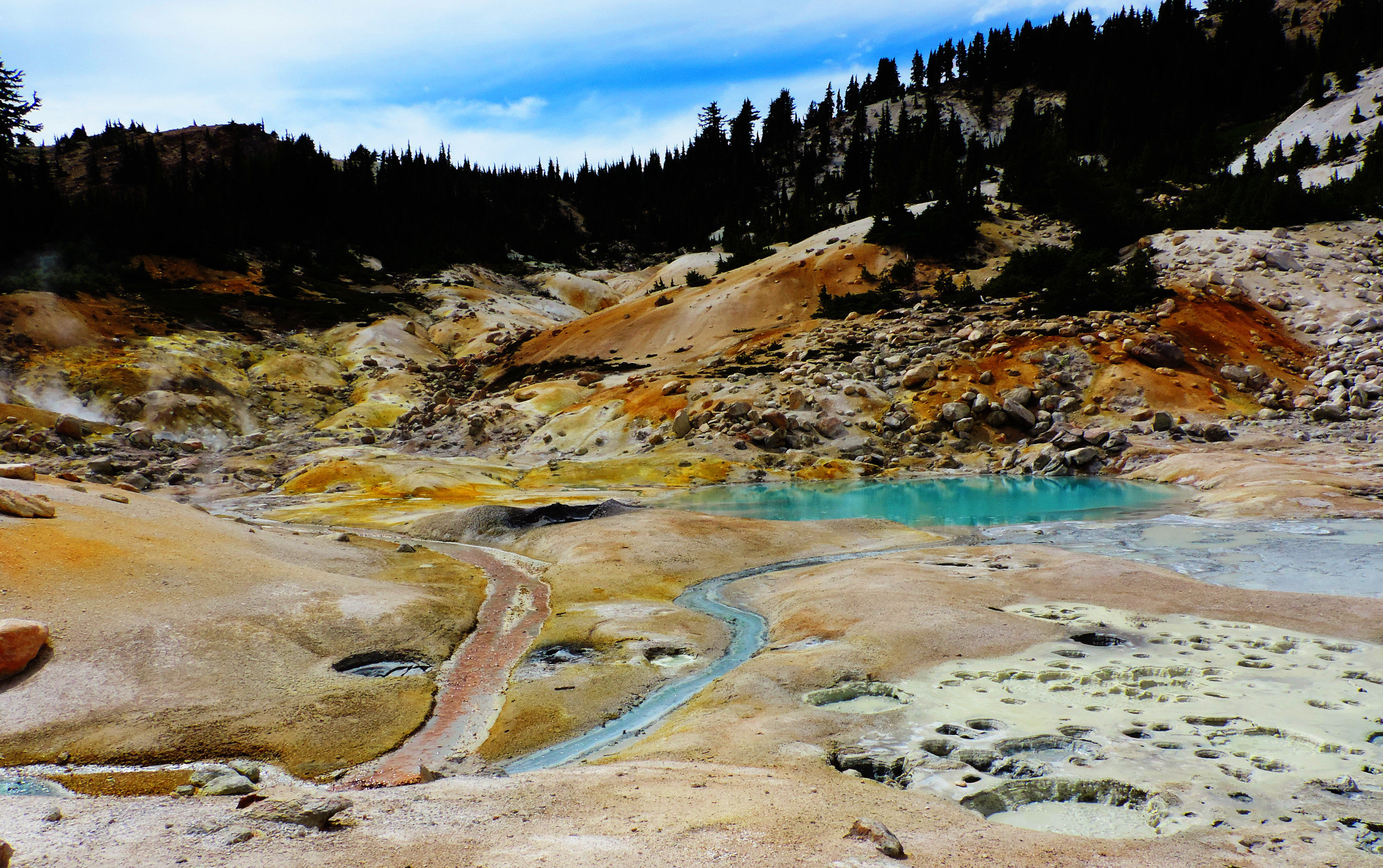 Roads in the park can be covered with snow from October-December to May-July depending on the weather. Once the roads are open, it’s good to go. The best thing to do is checking the National Park Service homepage about current road and weather conditions. It’s hard to predict the exact date of road openings, as sudden snowstorms in late spring can affect it.

Our advice is to be flexible and book cancellable accommodation if you plan for June/July. We went at the end of June, and we had hot, sunny weather.

Have you ever been to a volcanic park? Did you like it?