We travelled to Tenerife with our 1.5 years old boy in March and April. Though it was not a beach holiday (mainly because we can’t just lie on a beach for days, we’re yearning for being more active), it was a nature focused one, and we spent a lot of time on beaches. Sometimes full days, but more often a few hours in the afternoon once we finished our hike for the day.

It was definitely our little boy, Tomi who enjoyed the beaches the most. Sandy, pebbly, rocky, all was fun for him! Any beach is an easy thing with a toddler, because he usually entertains himself outdoors. On a sandy beach, he plays in the sand, on a pebbly beach he throws the pebbles into the water, on a rocky beach he plays in the shallow, warm tide pools. But he needs to be supervised closely – anywhere, anytime. 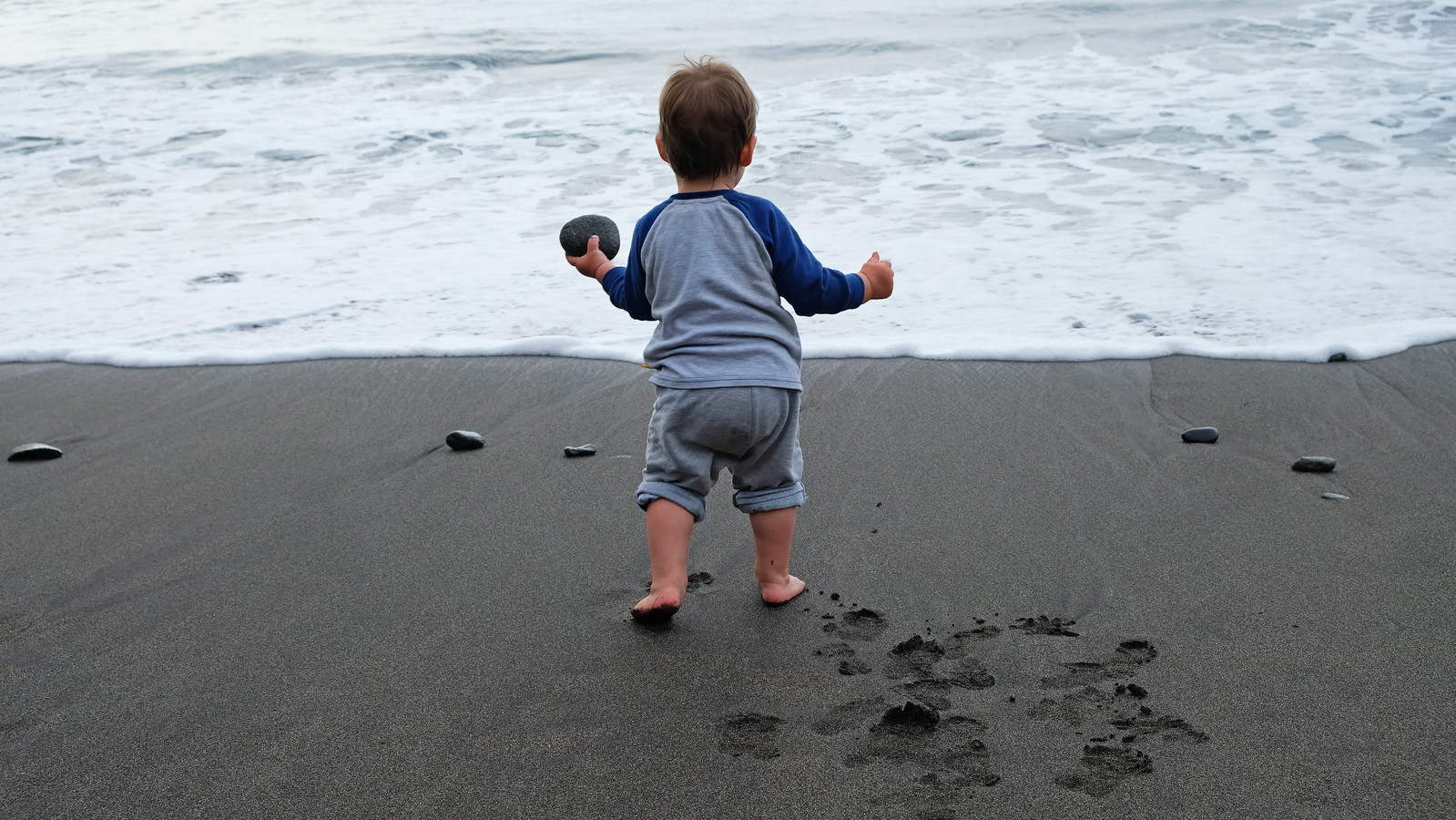 For these reasons, almost all beaches were equally great for us in Tenerife. But wait a few years, and this wouldn’t be the case. An older kid, who wants to go into the water and even swim, needs a beach where swimming is safe. It’s not that straightforward in Tenerife – or any island in the ocean. Because the ocean is powerful, the currents can be strong and dangerous. Not all beaches are safe all the time – not only for kids, but for adults either.

What kind of beaches are there in Tenerife?

Tenerife has sandy, pebbly and rocky beaches, and all of its natural beaches are black or grey. (Yes, volcanic black sand beaches! They’re just as cool as they sound.) You can find urban beaches and remote ones, too – some of which can only be accessed by hiking (or by boat). Hence there are beaches with and without lifeguards on duty.

But you can find a few golden sand beaches, many of which will be in our list of favorite family-friendly beaches. These ones are artificial though, and the golden sand was brought from Africa. We have mixed feelings about this at the least, and golden sand has nothing to do with family-friendliness, of course. But these beaches are also protected artificially: with reefs or breakwaters built from large rocks. They protect the beaches from large waves and strong currents, and that’s the reason they’re the safest to swim.

How do you know where and when it is safe to swim?

The beaches with a lifeguard on duty also have a flag to indicate whether it’s safe to swim. It can be green for yes, yellow for caution and red for no, not recommended at all. Obviously, remote beaches don’t have flags or lifeguards, but very often they have warnings posted that swimming is risky or usually not recommended. They might be safe at times, but you should evaluate that for yourself.

So what beaches do we think are family-friendly? We picked the ones that are very sheltered. Most of them have lifeguards (though it depends on the time of the year) and breakwaters or artificial reefs for protection. Some are golden sand, some are black sand, and some have very small, fine pebbles. 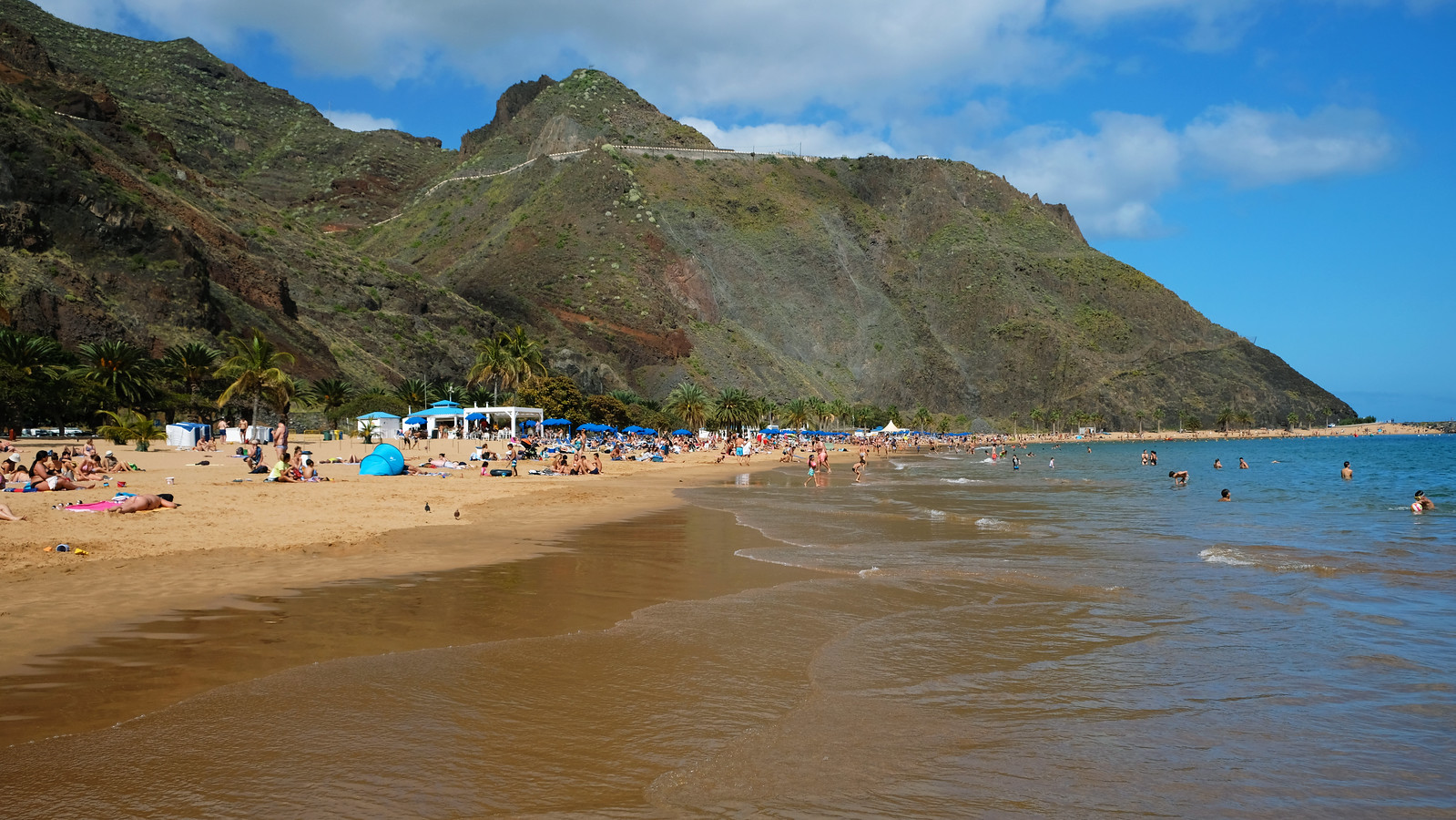 Teresitas Beach is the best and prettiest kid-friendly beach in Tenerife in our opinion. It’s large: 1.5 kilometres stretch of (golden) sand. It’s very protected: an artificial reef spans the entire length of the curved bay. The water is shallow, the sand is soft. Palm trees are planted on the beach to give you a tropical vibe, and the Anaga Mountains tower above it, offering a beautiful background.

Even though it’s a large beach, it can fill up easily on a nice day. 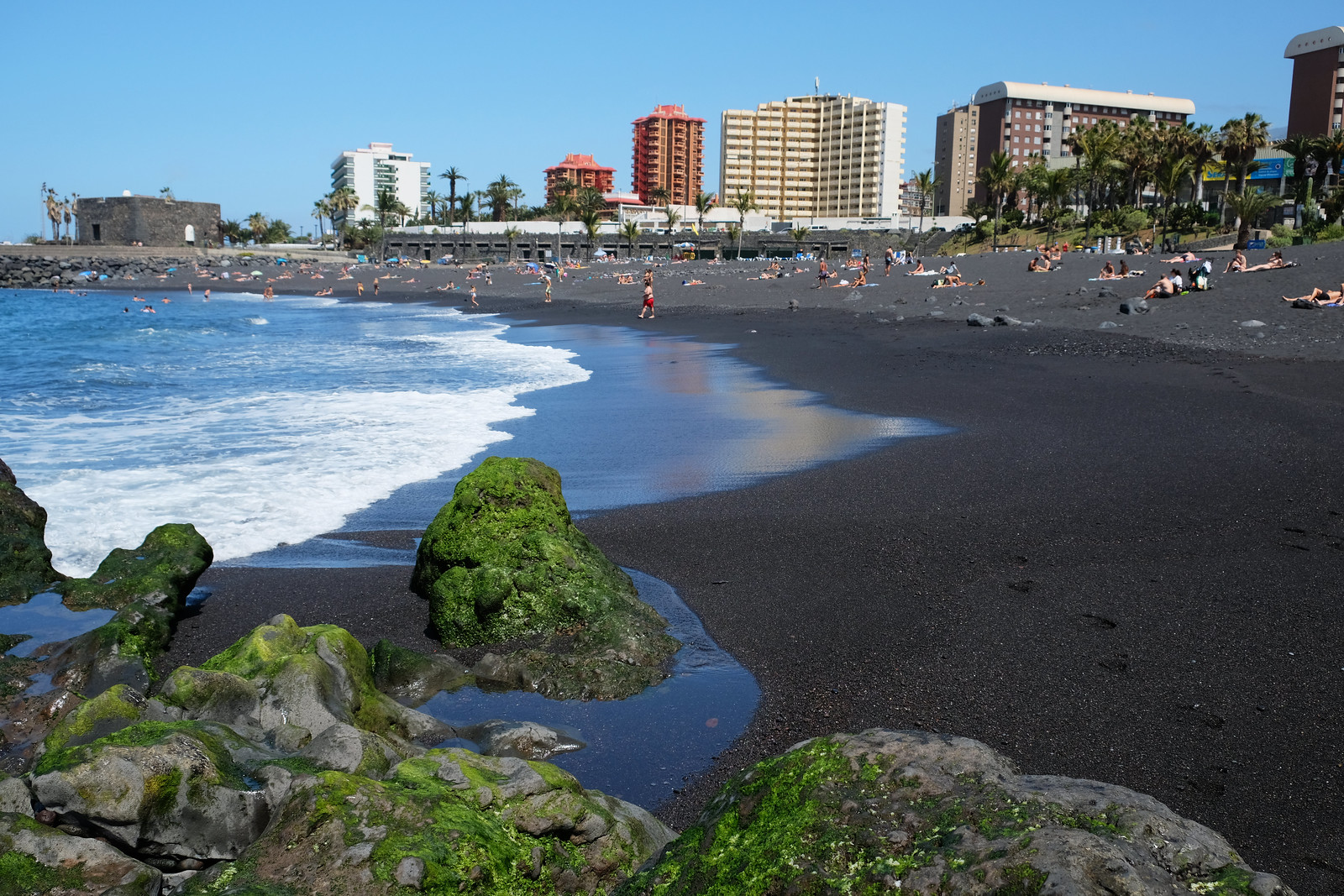 While Teresitas is our very favorite urban, kid-friendly beach, Playa Jardín closely follows. It’s part of a large beach complex in Puerto de la Cruz, the tourism center of the north coast. Playa Jardín has black sand (not that soft though), several large bays, breakwaters to make the water calmer, and a playground with a lovely garden behind the beach (hence the name “Garden Beach”).

It also has tide pools that are just the best playground for small kids! Or course, at low tide. Water is shallow and gets warm quickly in the tide pools, and there are lots of them, so every kid can choose their own pool. Our Tomi enjoyed splashing in the water there so much!

Otherwise, the ocean is not as calm as on Teresitas or Fañabe Beaches, despite the breakwaters, waves can be relatively big and strong on the beach. 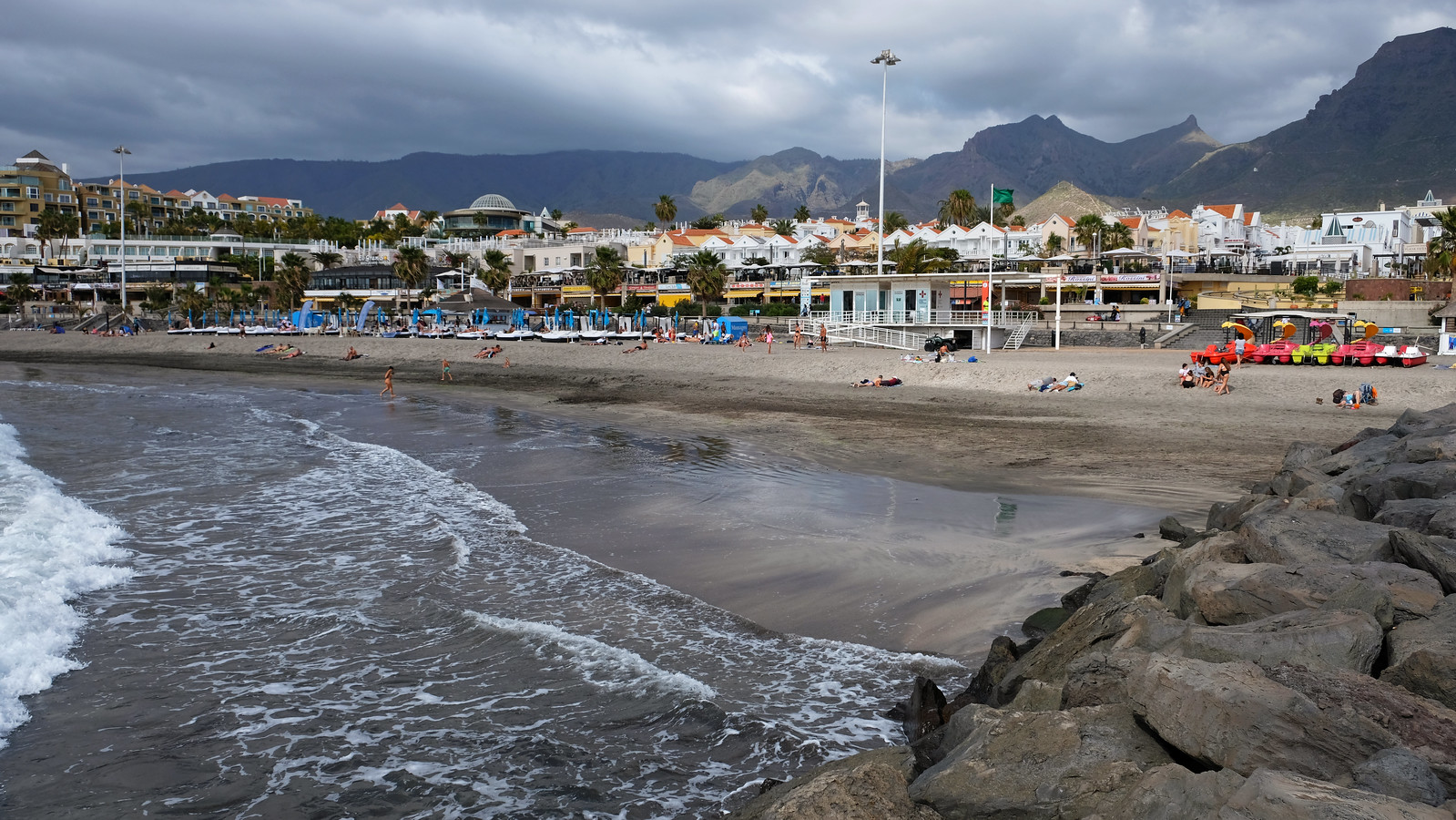 One of the many beaches of sunny Costa Adeje, Fañabe Beach is protected by breakwaters, so the waves are gentle. It’s a typical lively (often busy) urban beach, and we have to admit that while it’s one of the most kid-friendly beaches we encountered in Tenerife, Costa Adeje beaches in general were not among our favorites.

Surrounded by resorts, artificial and busy, and full of sellers who walk around the beach and try to sell you anything you don’t need and want, these are not really our type of beaches. We’d like to be left alone on a beach, and we prefer the quiet, untouched, remote ones. (We haven’t seen beach sellers anywhere other than Costa Adeje, by the way.)

Yet, give Fañabe a try with kids. (They like busy places, anyway.) Behind the beach there are several playgrounds and a nice oceanfront promenade dotted with palm trees, as well. 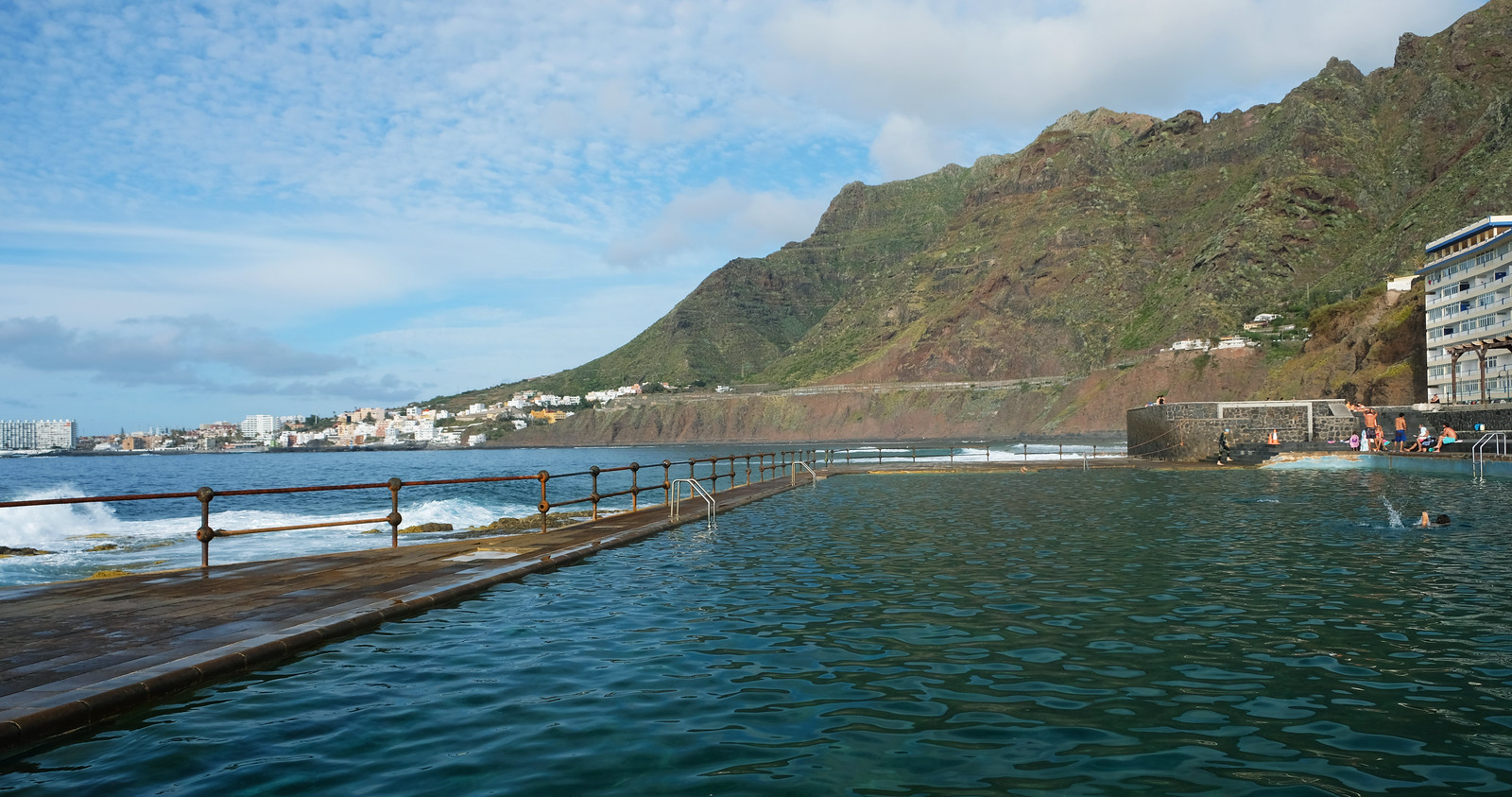 The two large pools are located right by the ocean so that the waves crash against them. They’re almost united with the ocean and the waves, and they were awarded the Blue Flag which ensures their great water quality. The third pool is a smaller one for children. 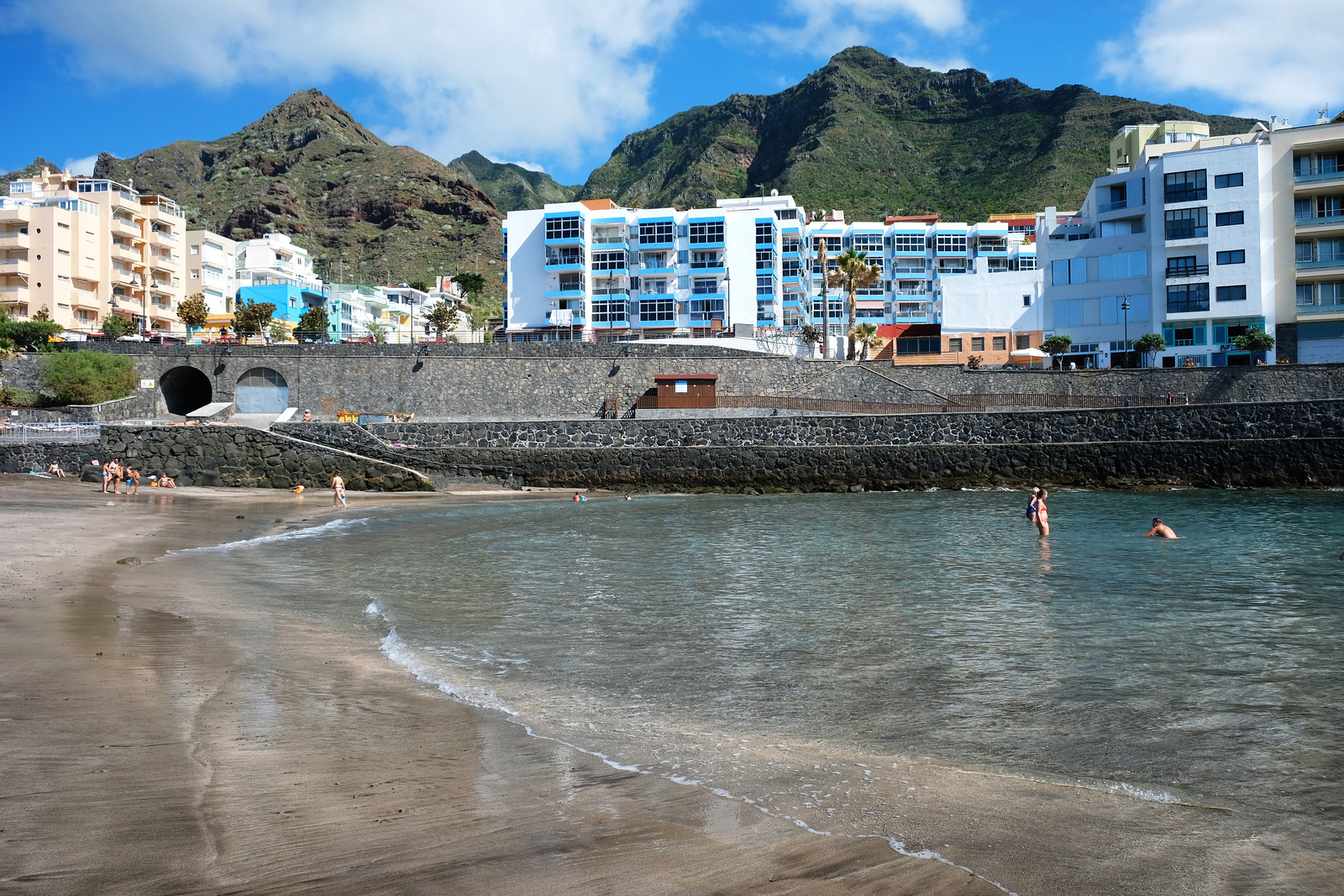 And what about the beach? It has fine volcanic sand, and it’s located in an artificially sheltered, small bay where the water is very shallow at low tide. It’s also quite cool to see the waves crashing the breakwaters – and they crash hard, the water often splashes up high. 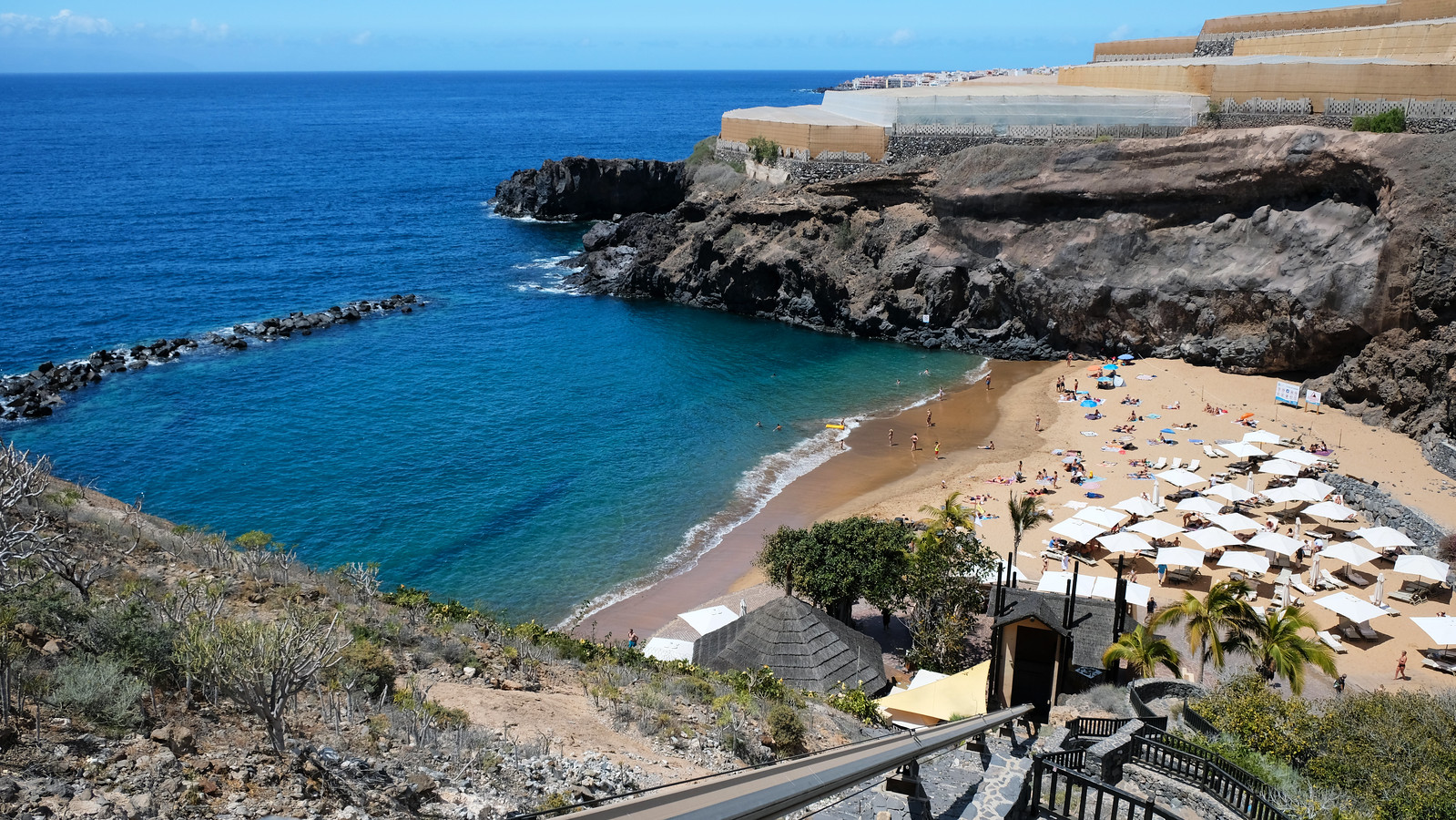 Playa Abama is a small, sandy bay right by a large luxury resort in Guía de Isora, and even larger banana plantations are settled next to it on the other side. It’s protected by an artificial reef which makes the water calm.

It might look like the private beach of the hotel at first glance, but it’s not. It’s a public beach, though you have to walk along the resort grounds and then down lots of steps to reach it. Parking is not possible by the beach, you can’t spare the steps. (The hotel has an elevator, but it was not in operation when we visited.) You can’t use the hotel parking either, but there’s a large, free parking lot on the other side of the street. 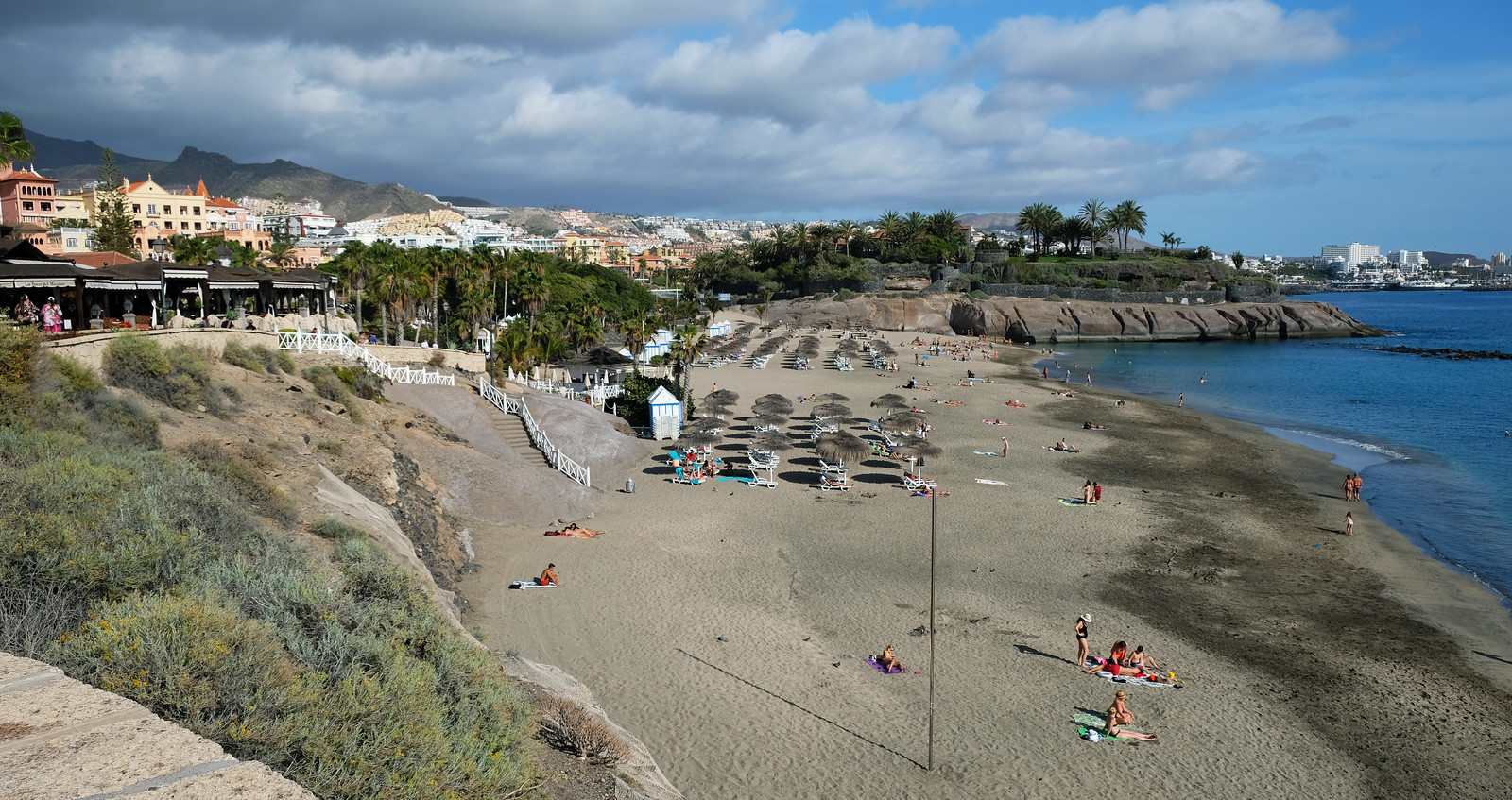 Probably the most exclusive beach on Costa Adeje, El Duque Beach is linked to Fañabe Beach and several others by a promenade. They’re also quite similar, El Duque has fine sand and breakwaters, and it’s a centrally located, popular beach surrounded by bars, restaurants, luxury resorts and exclusive shops. The disadvantages are the same as for Fañabe. 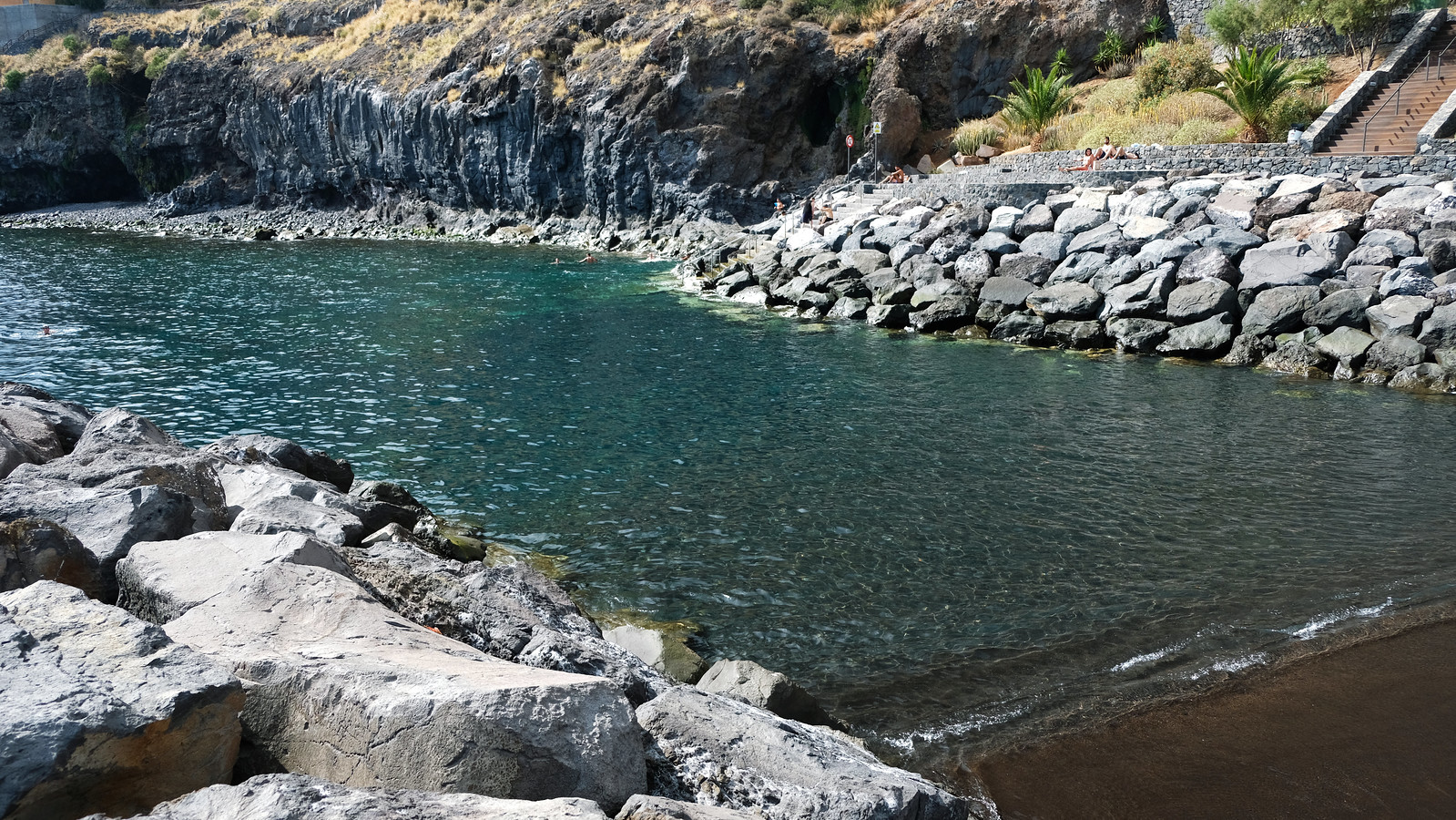 We stumbled upon this one when searching for a sandy beach near Malpaís de Güímar (an amazing little park for hiking!). Playa de Radazul consists of two small, black sand bays sheltered by breakwaters. It’s not the most scenic beach you can find, but it’s carefully planned and taken care of. There’s a playground for kids, a sunbathing area with nice views and a garden area in the middle. We don’t know how crowded it can get in the summer (and pre-COVID), but there were very few people there when we visited. 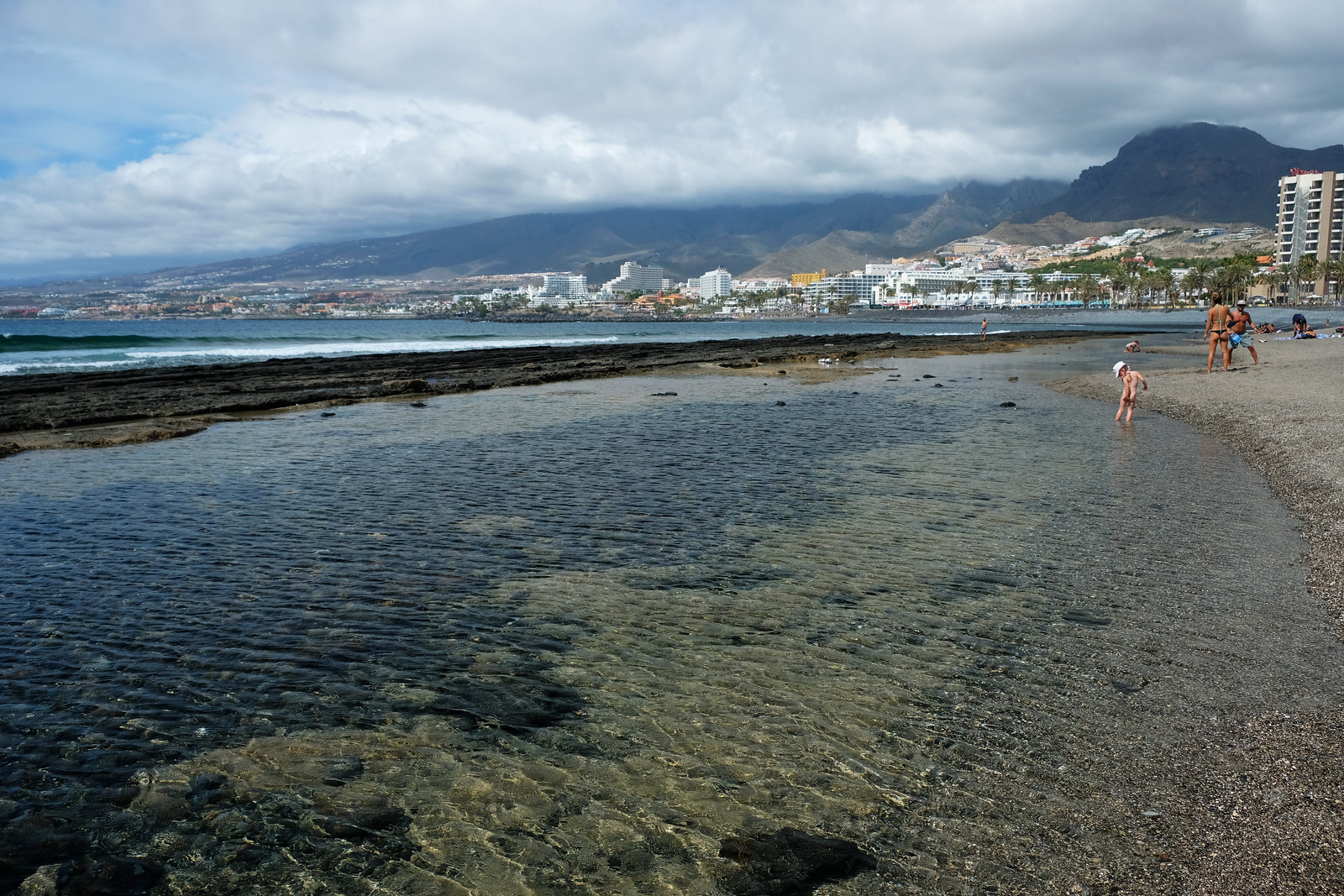 Finally, here’s a touristy one for you. While “playa” means beach in Spanish, Playa de las Américas is not a beach but a resort town, one of the most famous holiday resorts in Europe. It has several beaches, and based on this description we wouldn’t have been interested to visit it. 😛

It’s very close to the south airport though, and that’s the reason we chose it for our last day. But we found out something that we think is worth sharing, that’s why it has its place in this list. 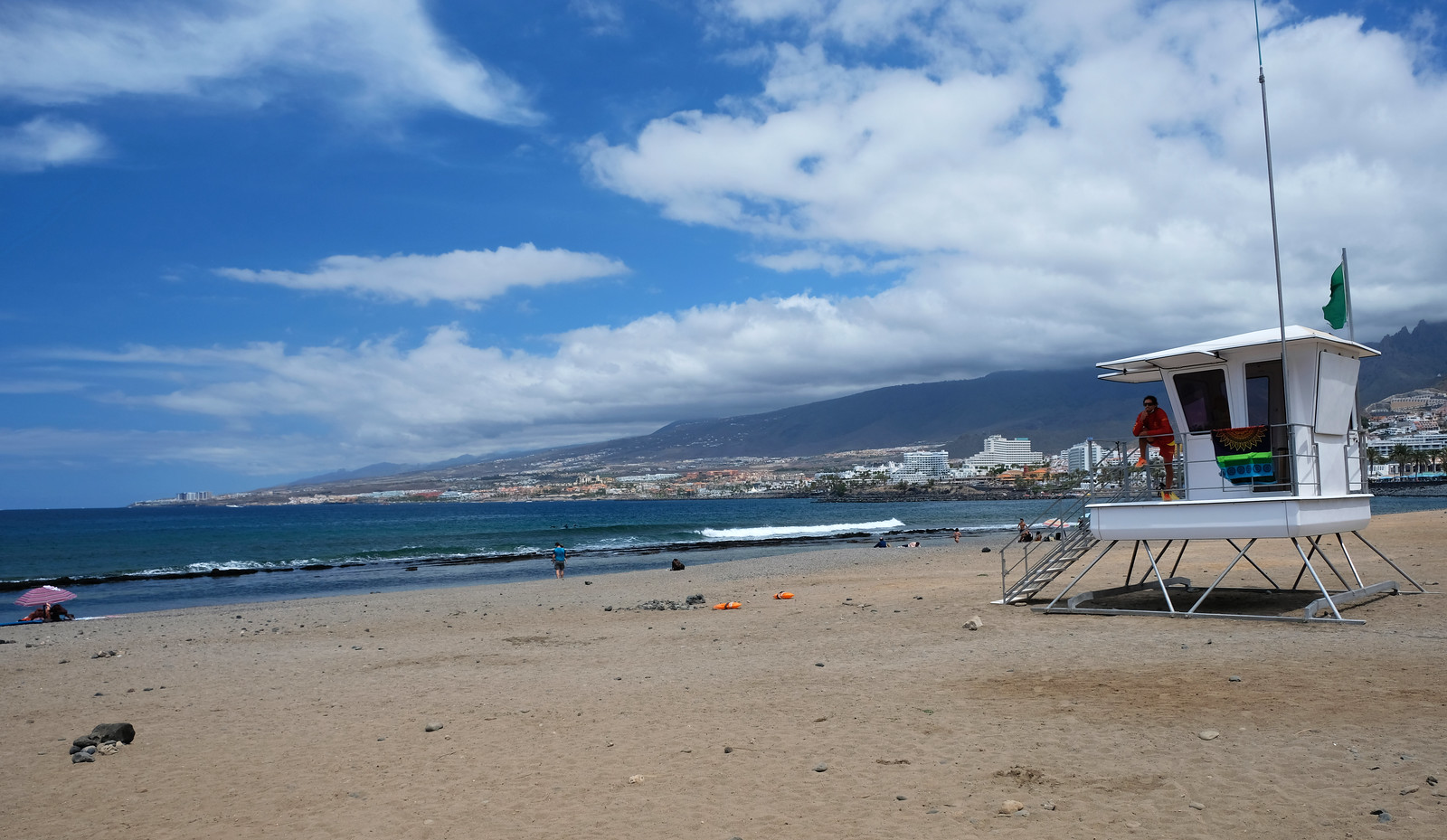 So Playa de las Américas has several beaches, the largest one is Playa de Troya, a sandy, kid-friendly beach with shallow water. But that’s not where we spent our time. We went to nearby Playa Honda which is considered more of a surfing beach, and the sand is also quite rough there (rather very small pebbles than sand, actually). But it’s a paradise for small kids because of a large tide pool, and several smaller ones! Of course, it’s fortunate to arrive at low tide, because in that case, you have a relatively warm, shallow pool that’s still big enough for kids to splash and play in. It’s too shallow for swimming though, so this is the ideal place for toddlers and small kids who can’t swim yet. 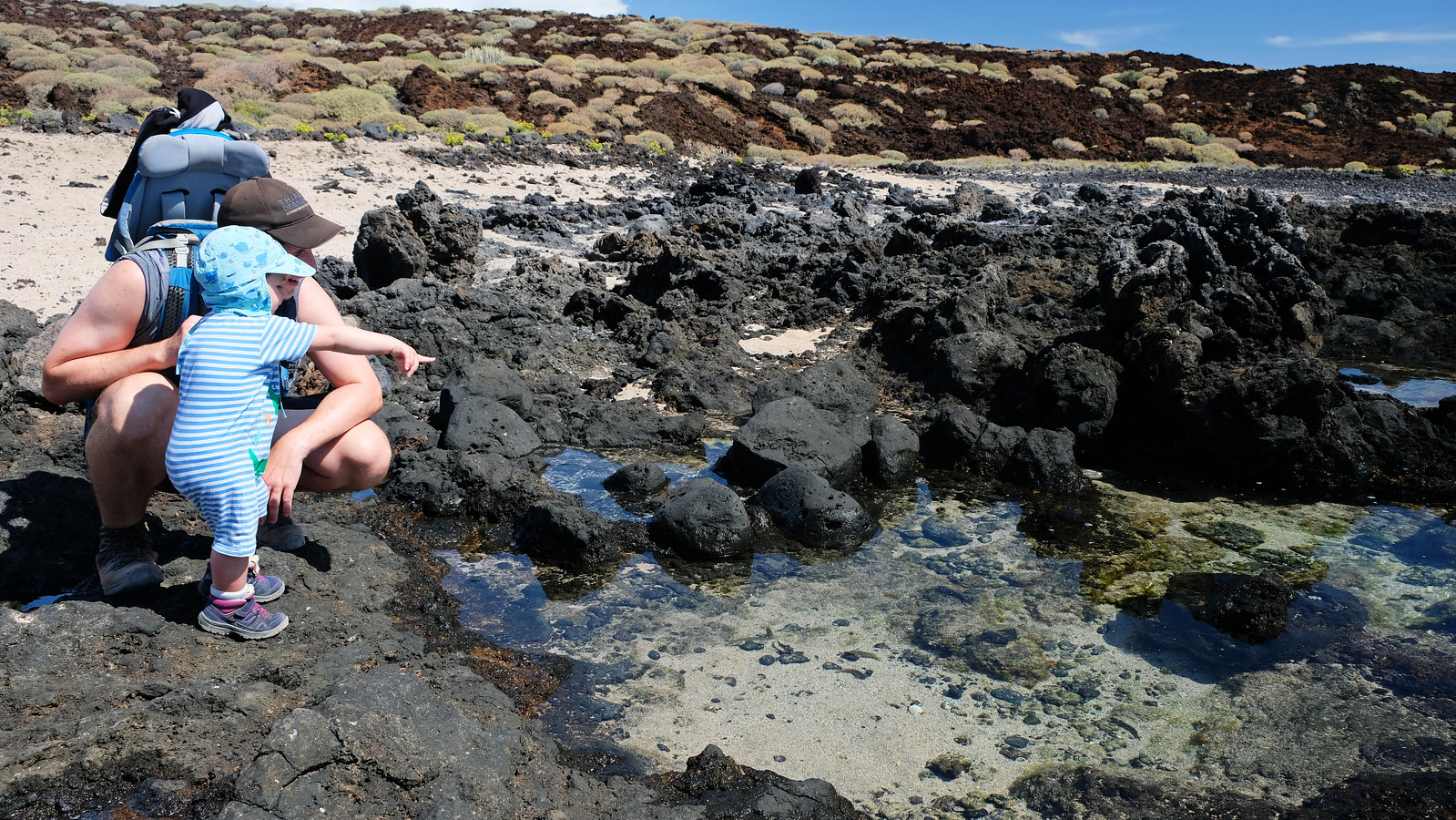 As you might have figured by now, we often preferred tide pools to beaches with Tomi. Tide pools can have shallow, protected and pleasantly warm water – the perfect bath tubs from nature to your toddler.

Tenerife has lots of natural pools, but not all of them are protected enough for a toddler to play – or not all the time. Yeah, when we talk about tide pools, we have to consider the tide. 🙂 But we often found suitable tide pools for Tomi even when we didn’t search for them, and then we stopped for an hour or so to let him play before we continued our hike on the coast. I loved it, because I wasn’t worried about him getting cold in the warm, shallow pool. Still I had to pay close attention, because rocks in the tide pools are often slippery, and some can be very sharp. 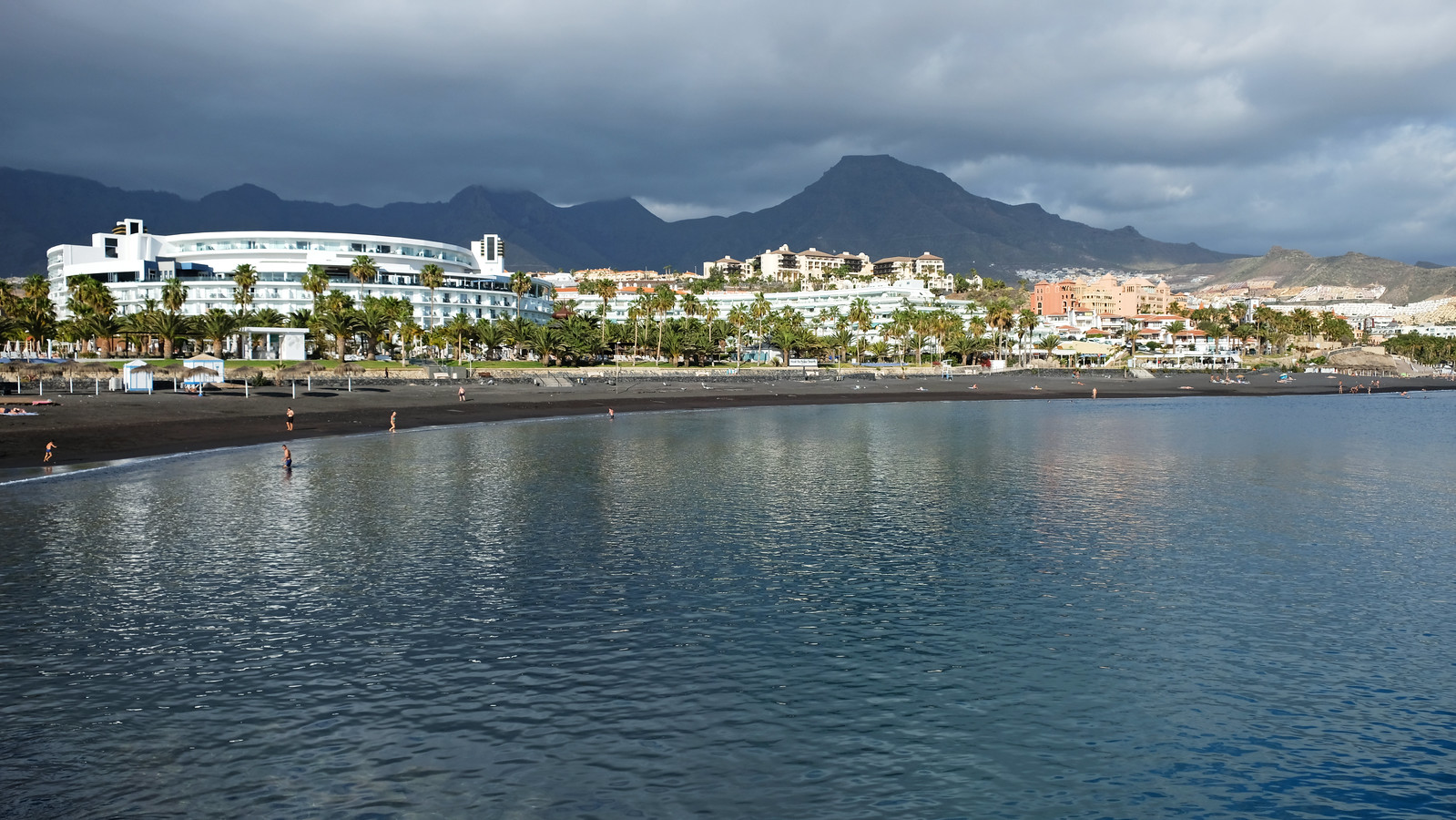 Parking in Tenerife has a huge advantage: it’s free almost anywhere. But it has a huge disadvantage, as well: it mostly means street parking, and it’s limited. Some beaches have dedicated parking lots, but most don’t. Since beaches were not packed when we visited this spring, we relatively easily found parking anywhere we went. In the worst case, we had to walk a few blocks to the beach. Just be prepared to drive around on the streets near the beach, hunting for an available parking spot.

Huh, we’re done for now. Any questions? Or any great family-friendly beaches you found but we missed?