Berlin, what could we say? First of all, we need to accept the fact that most European cities look the prettiest from late spring to early autumn. Then we need to consider the fact that the most crowded season of the year is exactly that. And living in Europe, where could we travel for a long weekend getaway in colder parts of the year if we don’t always want to go to Italy? (Though we did go to Italy, too, the past winter).

Do we love Berlin? 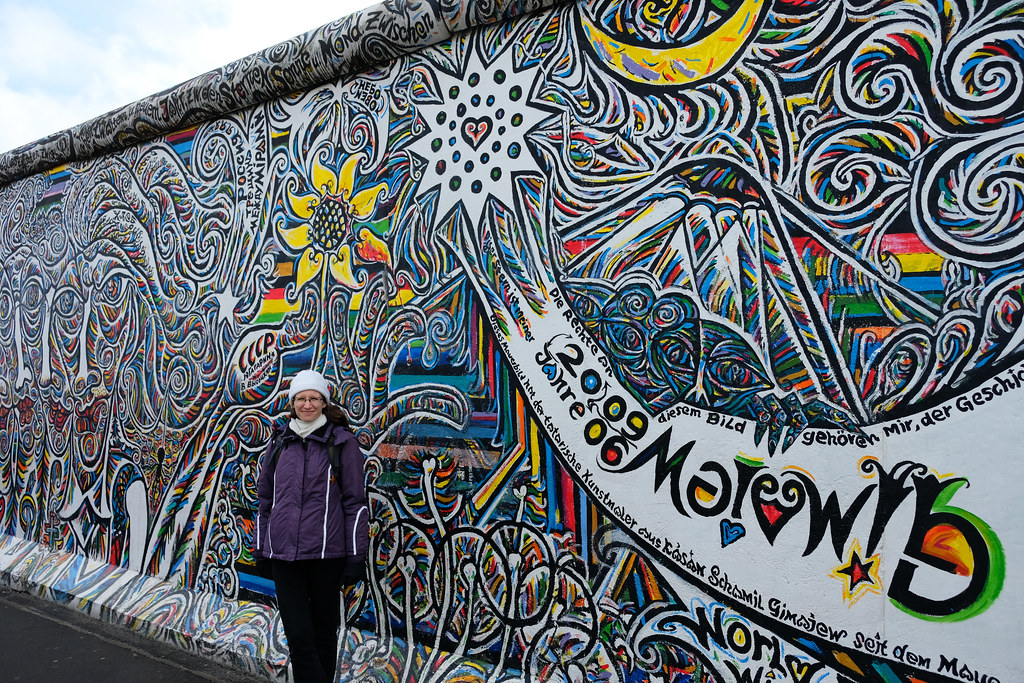 What we want to say is that visiting Berlin in March was maybe not the best decision. (But who could have resisted such a cheap air ticket we found for a March weekend?) We knew it will be cold. We knew it could be windy and rainy. It was all of those. And we suspect that part of the reason Berlin didn’t manage to touch anything inside us was the weather, and the lifelessness and greyness of the season.

Berlin’s architecture is also not what we’d call beautiful. Lots of construction sites, huge building blocks, lots of steel. We didn’t feel the harmony. However we felt the shadow of Berlin’s heavy past that’s in contrast with the funky, lively vibes of today’s Berlin. Berlin may not be a pretty city, but it’s an interesting one.

On the other hand, it’s not that we didn’t like anything there. Though we certainly don’t feel that passion for the city that a lot of fellow travellers do, we came home with some spectacular memories. Also, we found that the 48 hours we had is enough for quite a lot of things. Actually, all the things we wanted to see as first timers’. Let’s see what those are…

The Berlin Wall’s East Side Gallery 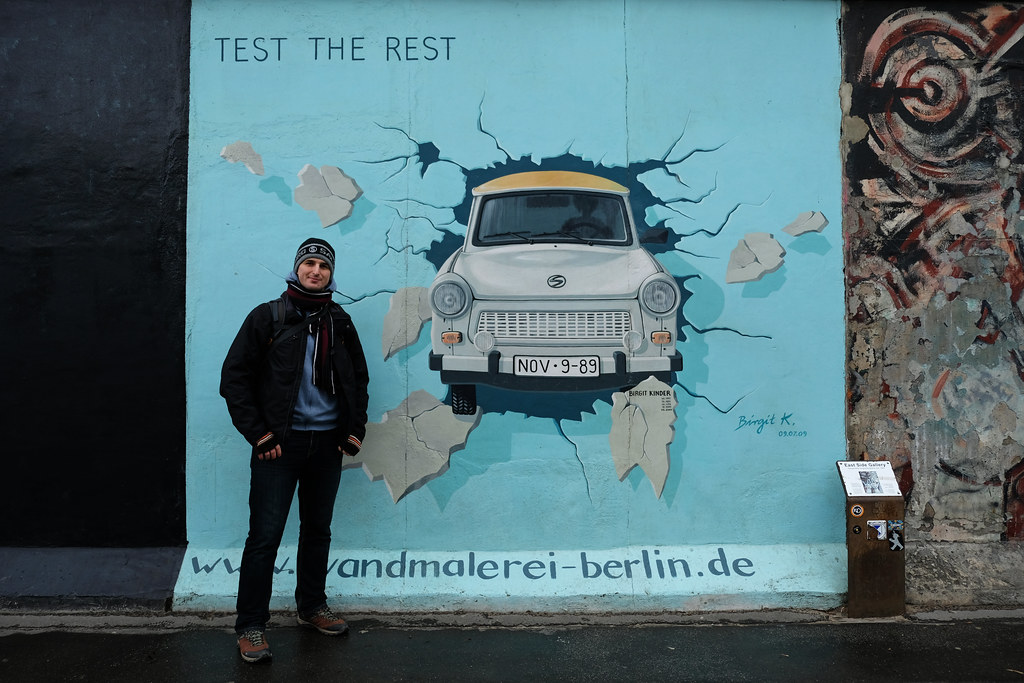 The first place we visited was one that we didn’t want to miss in any case: the iconic East Side Gallery of the Berlin Wall.

This open-air gallery was once the Berlin Wall. Today it’s 1.3 kilometres of color, art and history. More than a hundred artists started working on it right after the wall came down. Some of the paintings became quite famous, like the Fraternal Kiss or the Trabant. Some are beautiful, some are ironic, some are euphoric. And most of them made us think. Of course, we made our own pictures of them, too, as we strolled along. 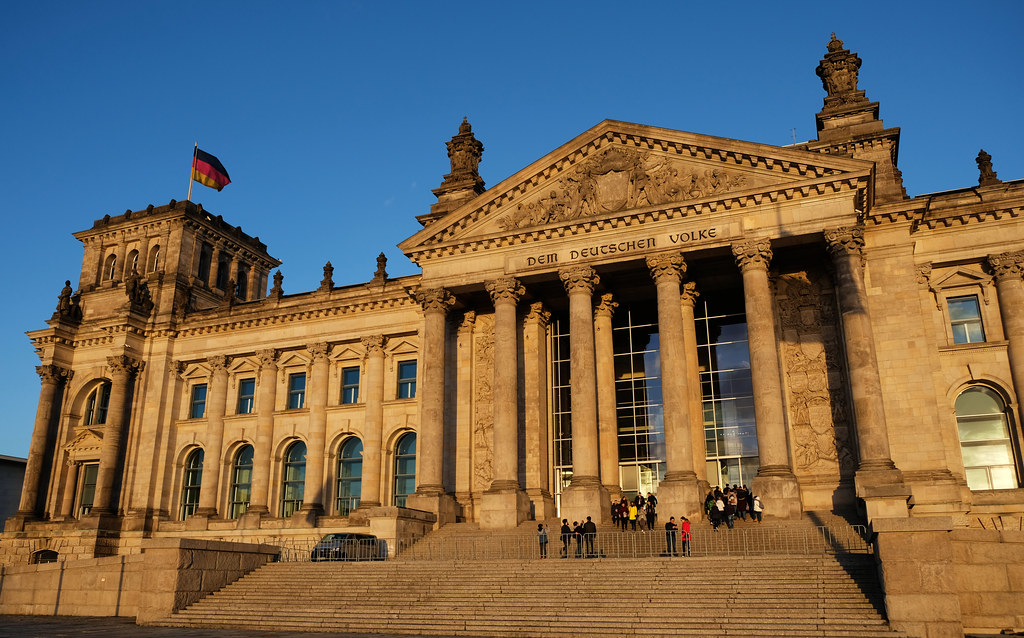 Going up to the glass dome of Reichstag was another highlight of our time in Berlin. This majestic building is home to the German parliament (Bundestag). Its glass dome offers a great 360 degrees panorama of the city, but it’s an interesting piece of modern architecture, as well. It was added to the building in 1999. 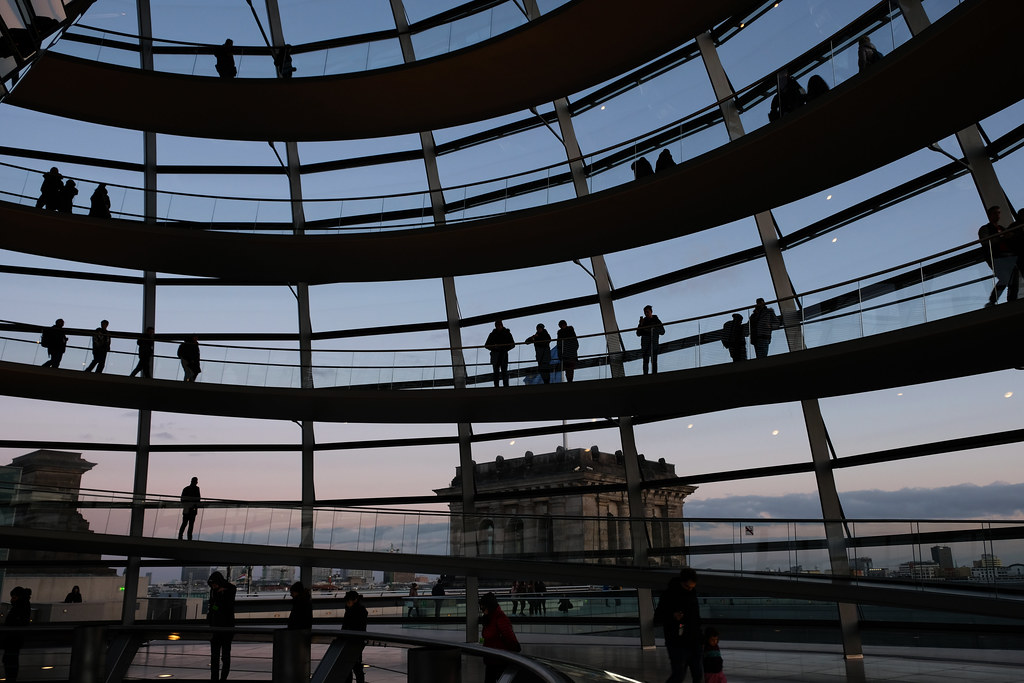 Even better, the glass dome is free to visit. But you need to register online (here!) and arrive in your time slot. We timed our visit for sunset, so we enjoyed both the pink and dark blue shades, and then the night panorama of Berlin.

It’s Berlin’s iconic landmark, inspired by Athens’ Acropolis and built on the orders of the Prussian king in the 18th century. Once separating East from West Berlin, today it’s the symbol of unity. It’s also one of the busiest spots in Berlin. Naturally, everyone wants to take a picture or selfie with it. Well, here’s ours: 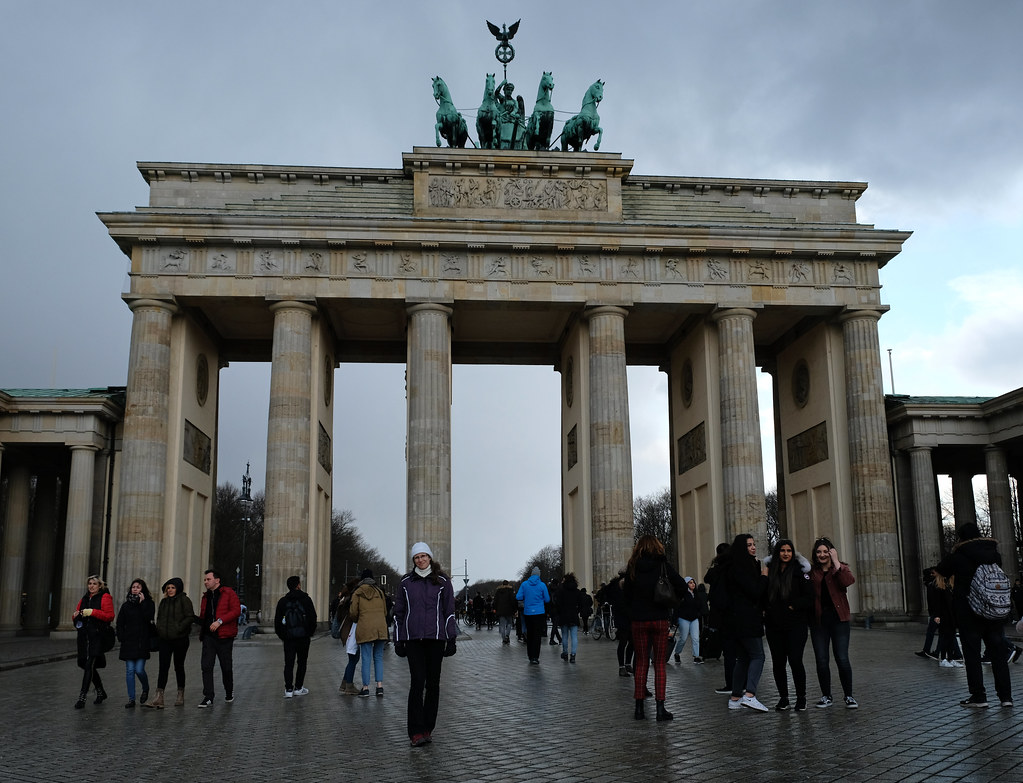 The Museum Island in the River Spree is supposed to be a pretty neighbourhood to walk around with all the classical museum buildings, the wide walking paths and lots of greenery. I’m sure that it is usually very pretty. However, when we visited this spring the whole island was under reconstruction. We could take a peek at some of the nice buildings (or mostly just part of them that was not covered), but it was basically a construction site. 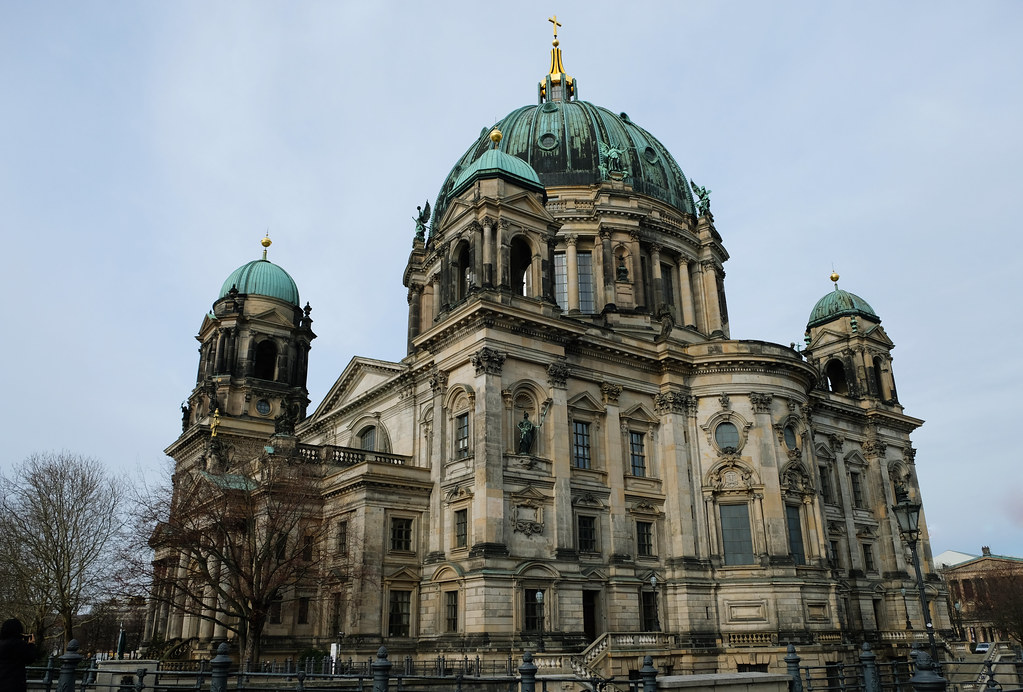 We went into the Cathedral Church (Berliner Dom) though, and the beauty of its interior somewhat compensated for our disappointment on the Museum Island. Once the court church to the Hohenzollern dynasty, nowadays it serves the Protestant community of Berlin. After climbing 270 steps to the outer walkway of the church, we were rewarded by lovely panoramic views. The number of cranes all over the city was indeed impressive. Not kidding.

Gendarmenmarkt is the name of a beautiful square. And it welcomed us with a heavy rain when we arrived there, so the first thing we did was running into the building of the German Cathedral. Unlike its name suggests, it’s not a church anymore, but it hosts a free exhibition on the history of the German Parliament. 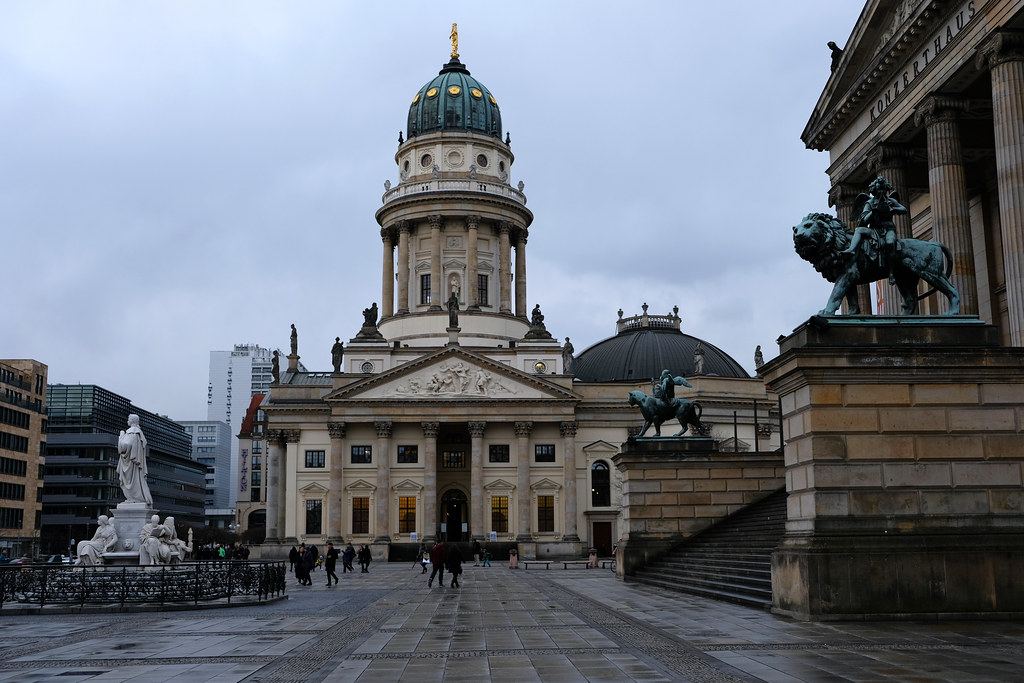 Its twin, the French Cathedral is opposite on the other end of the square. It houses the Huguenot museum today.

In the middle of Gendarmenmarkt stands the building of the Konzerthaus. Free walking tours are organized regularly to showcase its interior – and we missed them on both days. Be sure to check the schedule in advance. 😛

We expected Potsdamer Platz to be the Times Square of Berlin. Well, if you use such overstatements, it will probably be a disappointment. Otherwise, it’s the center of shopping and nightlife in Berlin. It was a wasteland when the Berlin Wall was running through it, and it became a central spot in the modern city.

Memorial to the Murdered Jews of Europe 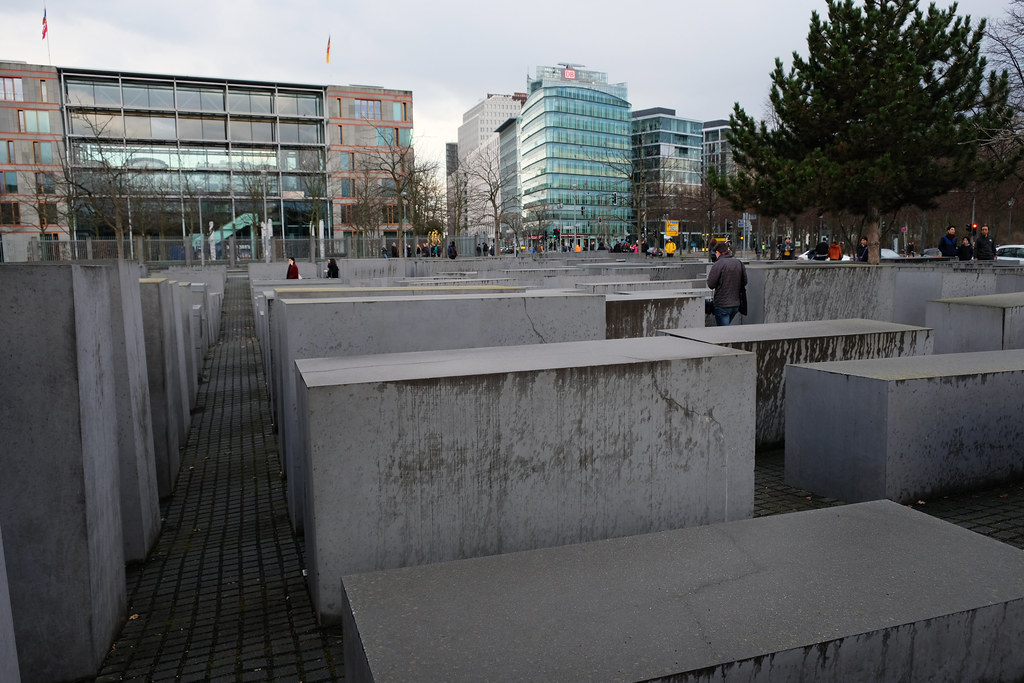 This memorial is on the way when walking from Brandenburg Gate to Potsdamer Platz. It consists of 2711 concrete slabs of different heights. It’s grey. It lacks of a central point. I wouldn’t say it’s nice, and I don’t think it’s supposed to be. It’s a place of contemplation and remembrance. 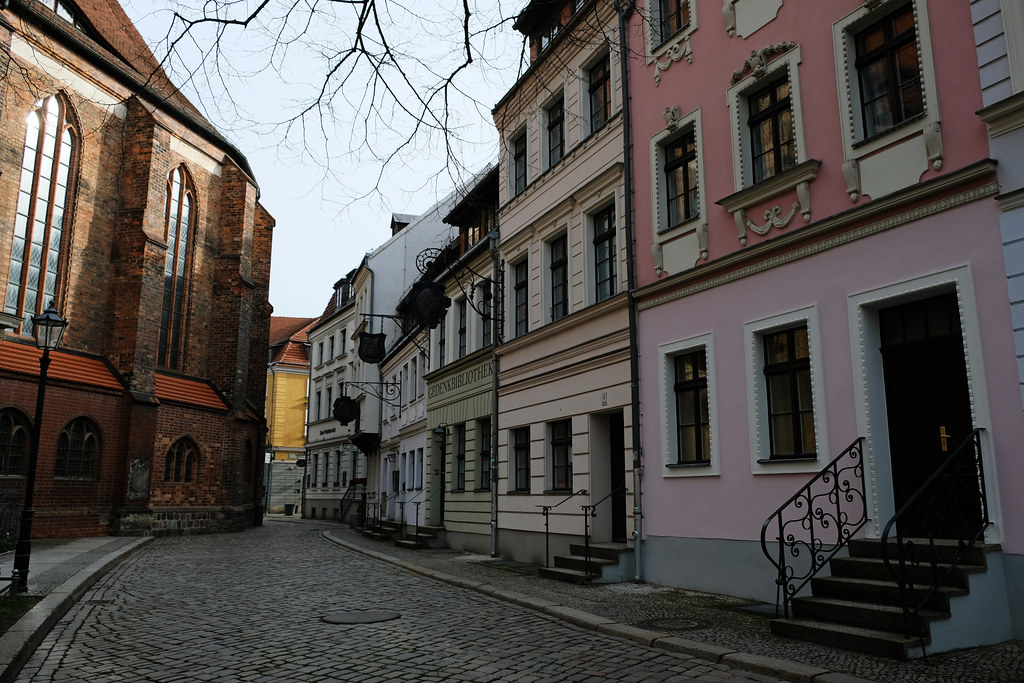 Walking the narrow streets of Nikolai Quarter with its cosy little houses are like leaving Berlin behind. At least the Berlin of today. Nikolai Quarter is actually Berlin’s oldest residential quarter, tradesmen and merchants settled there already in the Middle Ages.

The heart of this quarter is Nikolaikirche (St. Nicholas’s Church) that was built around 1200. Surprise, surprise, it’s not a real church anymore either, it houses a permanent exhibition on the history of the church and the quarter. 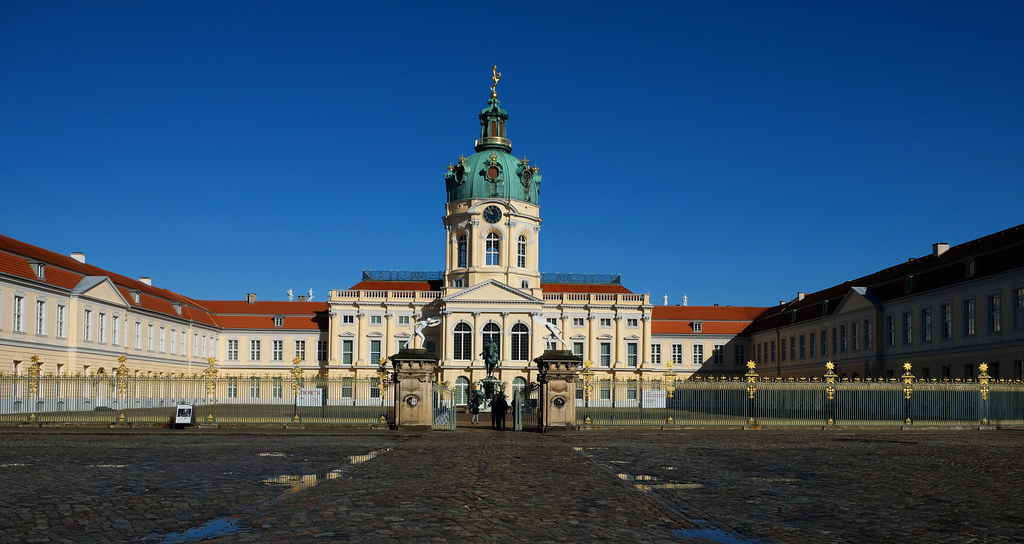 We like castles and palaces. Their architecture, their classical elegance, their splendid rooms, their traditions and secrets. Adding a palace to our itinerary most probably means that it will be one of the highlights of that trip. The case was no different with Charlottenburg Palace, in one of the western districts of Berlin.

Though Charlottenburg Palace was badly damaged during the Second World War, it has been nicely reconstructed since then, and today it’s the most magnificent palace in Berlin. We could visit its stunning interiors on a self-guided tour with audio guide. 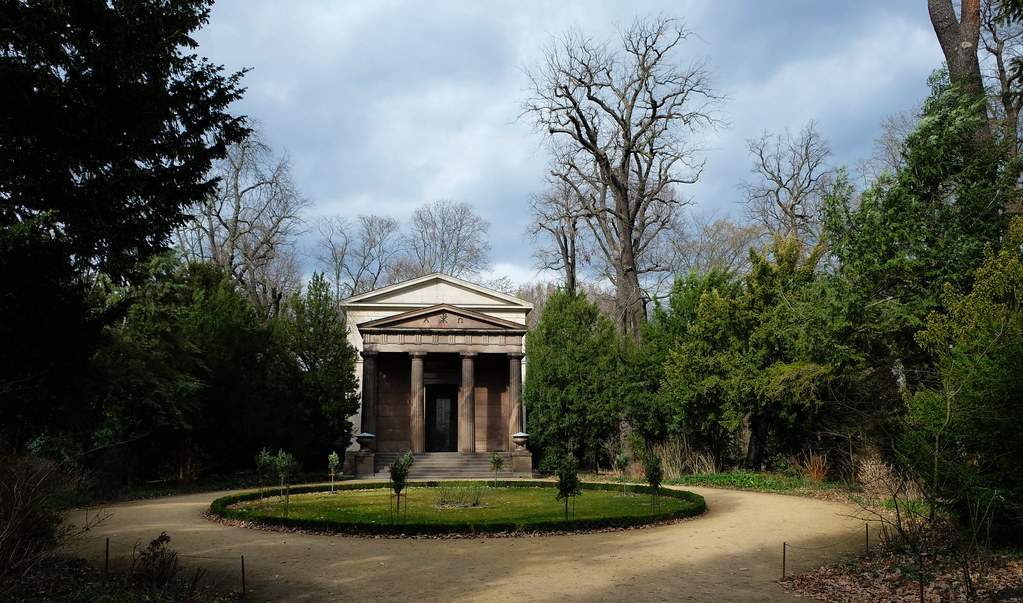 The interiors of the Old Palace are a pretty example of Baroque style. We found the Porcelain Cabinet with a breathtaking collection of blue-and-white porcelain very special. The New Wing, on the other hand, includes the Rococo state apartments. Its ballroom is quite magical.

So we definitely got our fairy tale at Charlottenburg and were happy to spend more than half a day there. We also found the palace and Charlottenburg district being in contrast with the Berlin we got to know: classical and elegant instead of the modern, grey, steel & glass Berlin.

Guys, those of you who’ve been and loved Berlin, what’s your secret? Should we give it another chance? Where should we go and what should we do?