Romania is lucky to be home of several mountain ranges of the Carpathians. This fact itself makes it quite attractive in our eyes. Actually, it’s our favorite thing about Romania. We are passionate hikers, and the Carpathians offer such wild, undeveloped landscapes that are rare to find in Europe.

They are not too well-known and often not easy to access either. That means less people, but also some challenges when planning our hikes and driving on the narrow mountain roads – where road quality varies from good to terrible. Still the Carpathians tempt us back again and again. 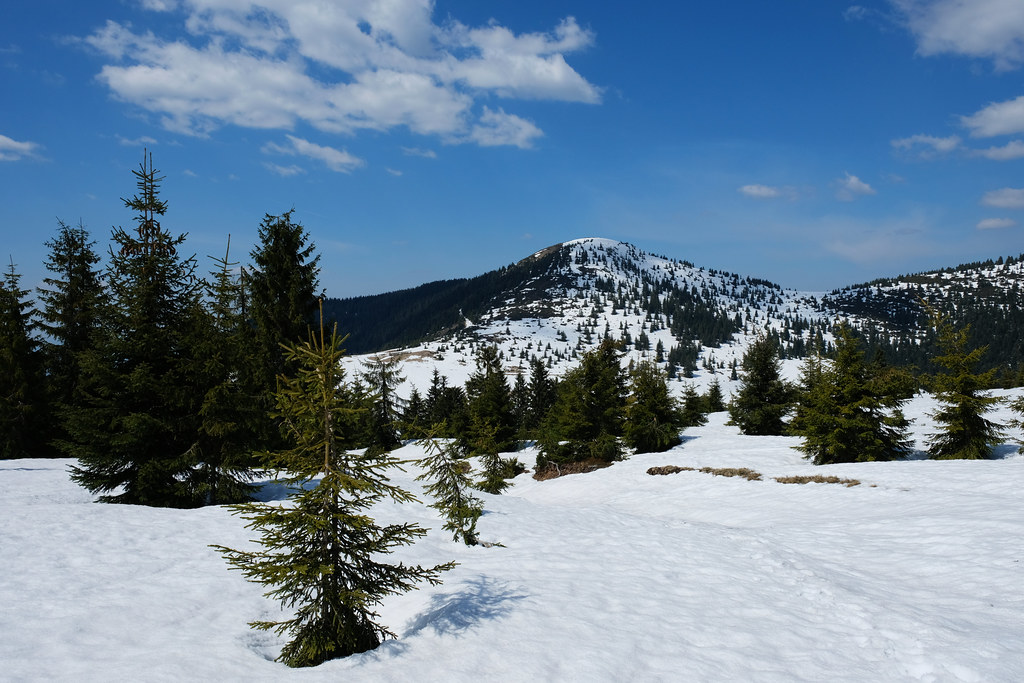 This Easter we spent a long weekend hiking in Apuseni Mountains in the Western Carpathians. And now we’d like to show you some great hikes we found there.

The Apuseni Nature Park (Parcul Natural Apuseni in Romanian) is famous for its caves – it has about 400! Its highest peak, Cucurbăta Mare (also called Bihor Peak) is 1849 metres high, so it’s not the highest mountain range in Romania. But it offers fascinating karst formations, mysterious underground rivers, deep valleys, gorges and countless waterfalls. And Padiș Plateau – which was our main reason to visit Apuseni Mountains at the end of April. 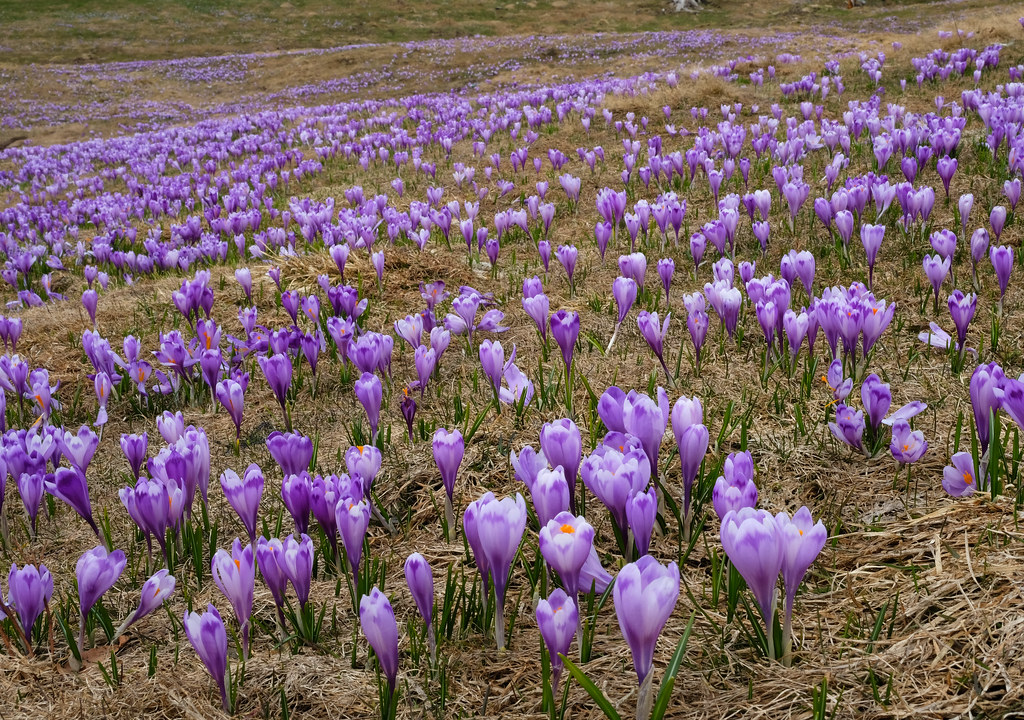 Because late April and early May is the peak of wildflower bloom on Padiș Plateau. Most of the landscape is still covered by snow, but as it melts, crocuses bloom. These pretty purple flowers pop their heads up under the snow, and there were millions of them on Padiș Plateau when we visited. By the time the snow is gone, they are gone, too. But this time our timing was perfect to see one of the most beautiful wildflower blooms in our lives! 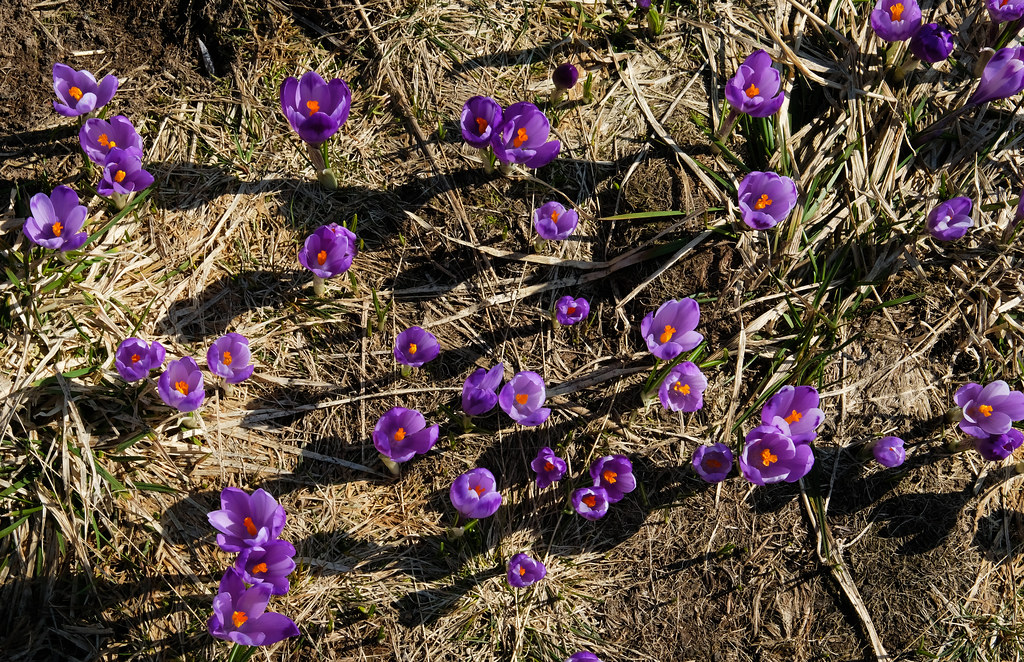 To access Padiș Plateau you need to drive to the village called Padiș. This road is in a surprisingly good condition, and the reason is that it’s brand new. Previously there was only a dirt road leading to Padiș and further into the wilderness. Now the road is paved – but beware, it’s paved only until Padiș (from the direction of Oradea and Beiuș). Even though Google Maps suggests you can drive further, we wouldn’t do it with a normal car, especially not in spring when there’s still a lot of snow at higher elevations.

But our hike started from Padiș, so we left the car in a designated free parking area, and set off. Well, okay, since I already noticed the meadows that were covered by countless crocuses and looked like a purple carpet, I ran to take a closer look with my camera in hand. After a while, we truly set off on the blue trail towards Piatra Tâlharului and Stana de Vale.

Where to see the crocuses? Everywhere 🙂 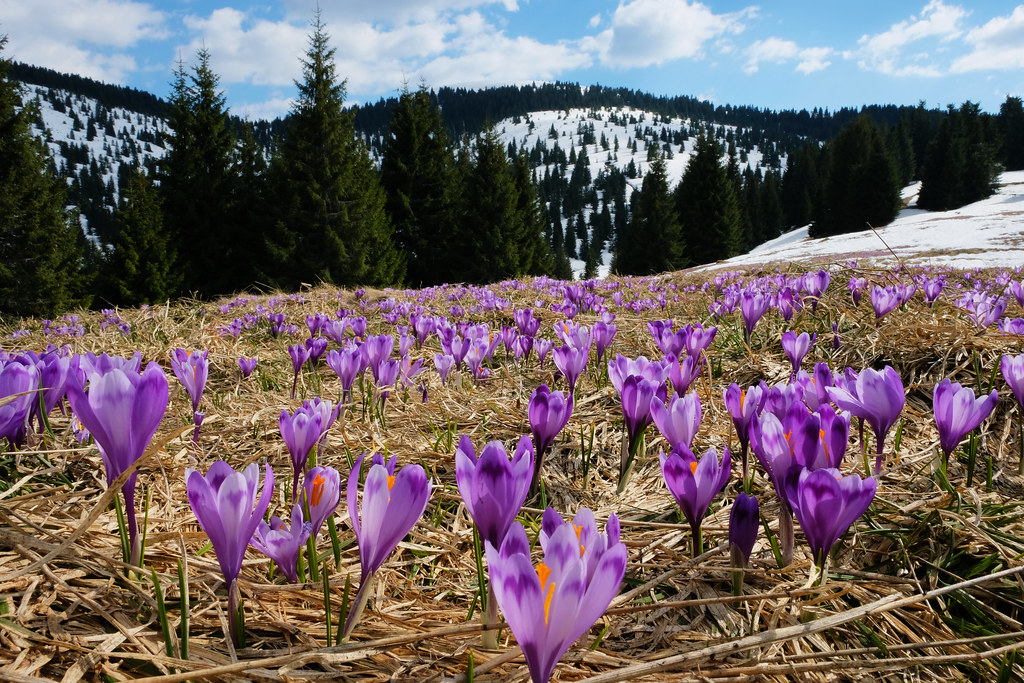 Hiking all the way to the village of Stana de Vale takes a full day, so we haven’t even planned for that. Our goal was basically just hike on the plateau to see the blooming crocuses. If I’d have had the thought that I managed to see an exceptionally beautiful meadow with crocuses in the village, I’d have been proven wrong a hundred times during this hike. Crocuses were everywhere!

In other terms, we were not so lucky. We planned to turn back at a nice waterfall, but we couldn’t reach it. Waterfalls are often in valleys, and as we realized in the following days, most valleys in Apuseni Mountains are hard to access – or even inaccessible. The usual story is: there was a trail once, but it got closed, because fallen trees made it impossible to get through. This is the message posted at most of the valley entrances. 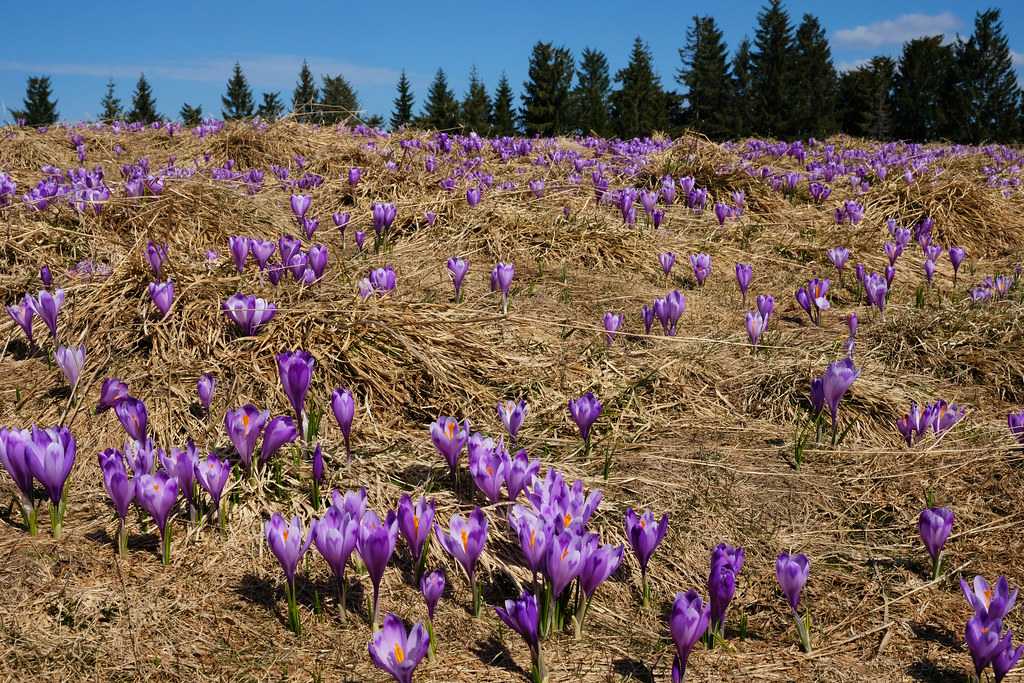 As we got to know from other hikers, most of these closed trails are closed for years now. Several harsh winters had damaged these forests. No matter how sorry we felt to miss the waterfall, we rather turned back. Pretty crocuses came to our comfort though, we just couldn’t have enough of them. 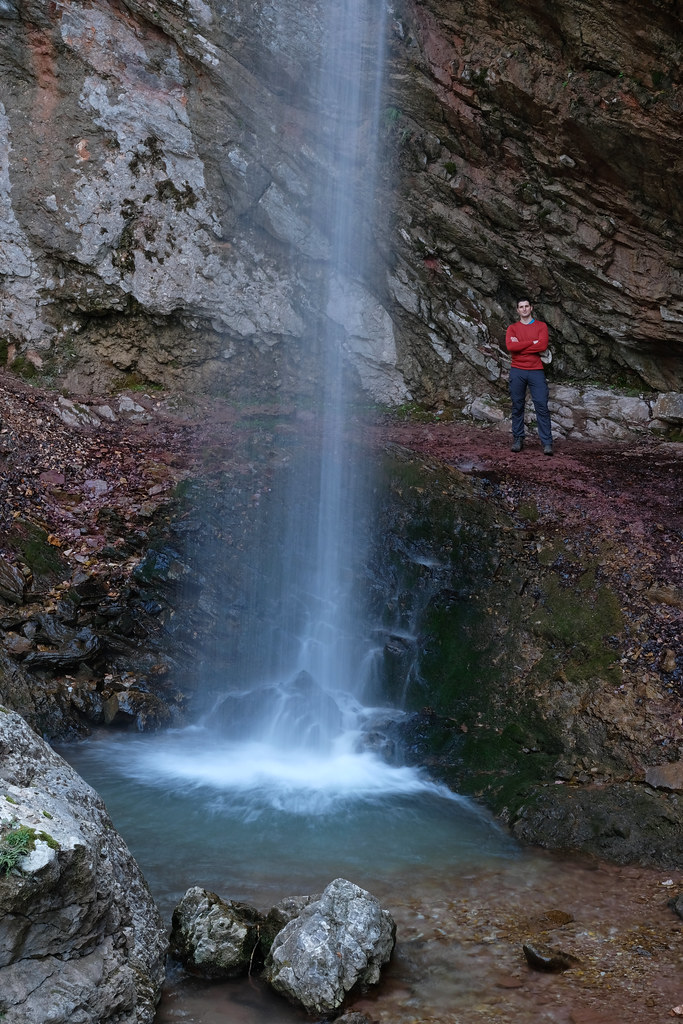 Our next hike was a short one, and there we got our waterfall. Actually, we got to see three waterfalls. Cascada Bulbuci is the name of the first one that we could even walk behind. A short, but steep climb further up in the gorge from Cascada Bulbuci took us to a viewpoint where we saw the second and third waterfalls.

And now comes the harder part: explaining how to find this trail. We didn’t find any usable hiking map for Apuseni Mountains online. Our hiking apps (mapy.cz is the one we often use in Eastern Europe) didn’t have accurate information about this trail either.

How to find the right trail to the waterfall? 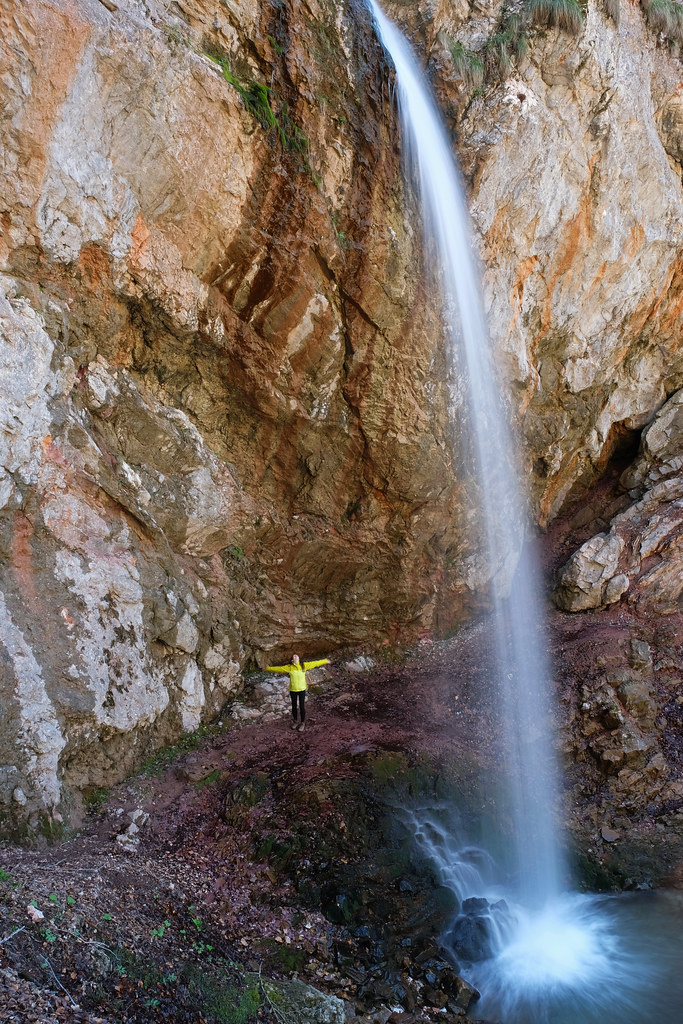 What we knew is that the trailhead should be at the end of a village called Boga. (It’s on the way towards Padiș.) We figured that a sign indicates “Cascada” there. It’s a useful word to know, it means waterfall in Romanian. 🙂 Then we just followed the path. Only sometimes it’s not that obvious whether it’s a path. Or there are more paths.

In theory, it’s quite easy to find the waterfall as long as you find the small gorge. But the gorge is too narrow and steep, so you can’t climb up to the waterfall in the gorge. The trail that finally led us there is above the gorge on the left side. We had to cross the small stream and follow a narrow path upwards. Soon it became obvious that it’s a hiking path and a lot of people use it. At the end, there was the waterfall. 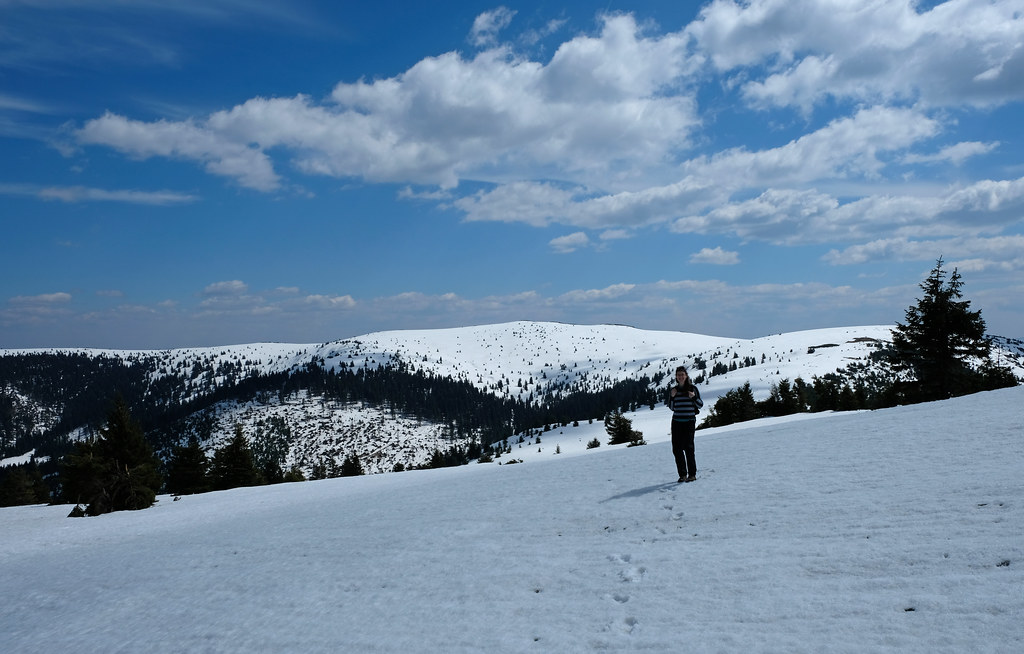 So our hikes in Apuseni Mountains rarely turned out as we planned them. Either we didn’t have accurate information about the trail beforehand, or it turned out the trail is closed or too dangerous to do in spring (because of the melting, but still very deep snow). Despite of this, we did amazing hikes – just not the ones we planned. One of these is the hike to Bohodei peak (1653 m).

We started the hike in Stana de Vale, and followed the red sign. Originally, we wanted to get to Bohodei waterfall. Since that trail was closed, we chose to conquer Bohodei peak instead. The meadows were either covered by deep snow or countless crocuses or a mix of both. Some large fallen trees made the path a bit more challenging, but we were rewarded with stunning views, especially after we reached the saddle. 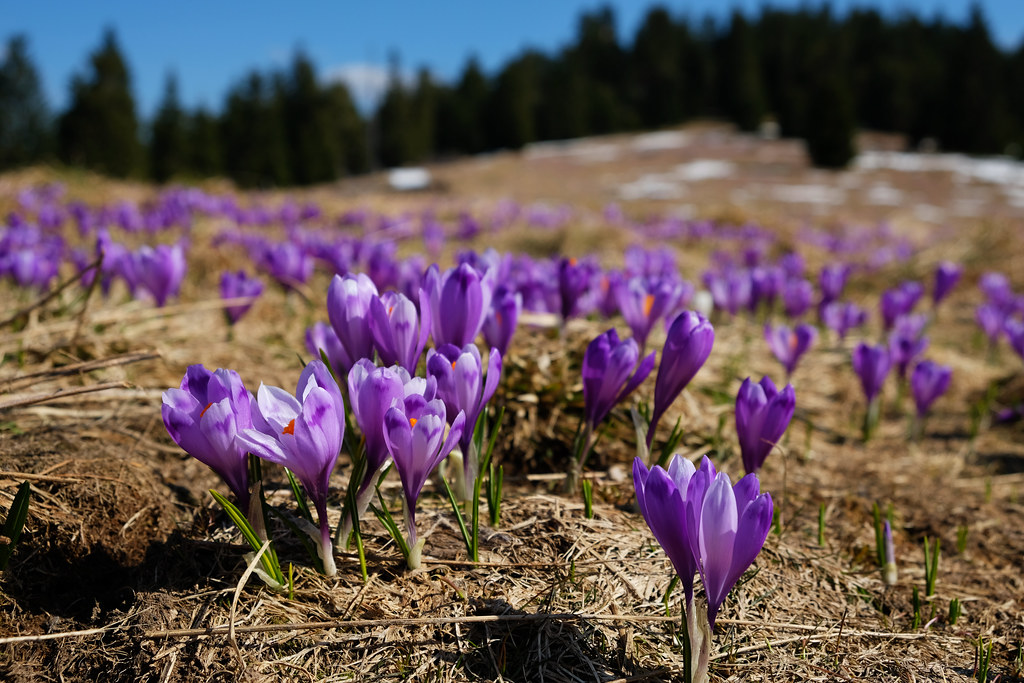 We returned to the village on the same way (following the red sign). By the way, we did most of this hike in the snow. We could tell that walking 7-8 hours in melting snow tests your waterproof hiking boots – ours failed. 😛 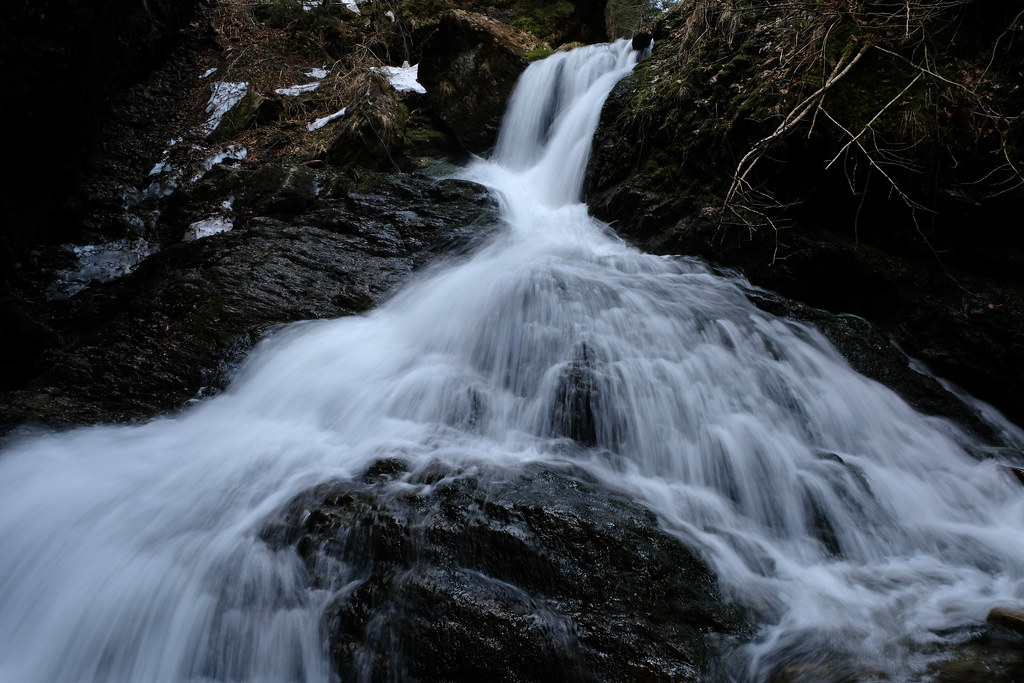 Finally, we planned to do a long, but easy loop trail that gives access to several waterfalls. Oh, those valleys and waterfalls again. It was not like we thought.

The loop starts and ends in Stana de Vale, but first of all, you can’t do it as a loop. If you do it counterclockwise (which is what we recommend, because only that first section is officially open), then the part after Ieduțului waterfall is closed. Same message: danger, fallen trees etc. We also wanted to make a detour to include Cascada Laia Mare, another waterfall – well, that trail in the narrow gorge is also closed. We couldn’t even see the trail under the fallen trees. 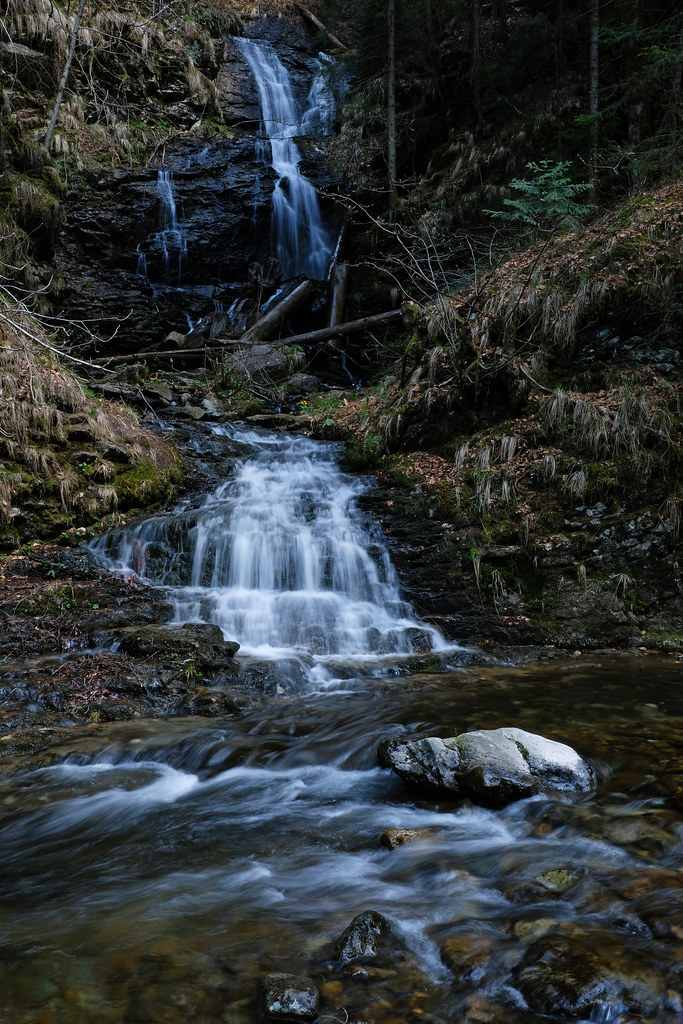 So we hiked to Ieduțului waterfall and back on the same way. As a good surprise though, we found several smaller waterfalls on the way, and a larger one, too, called Cascada Vălul Miresei. The path is almost flat and quite wide, so it’s easy for the most part.

Some hiking maps were posted at the trailheads, mostly in Stana de Vale where a lot of trails start. We took a picture of them, and we’re publishing it for you now so that you have some idea about the routes and the trail signs you need to follow.

The trails around Cascada Bulbuci: 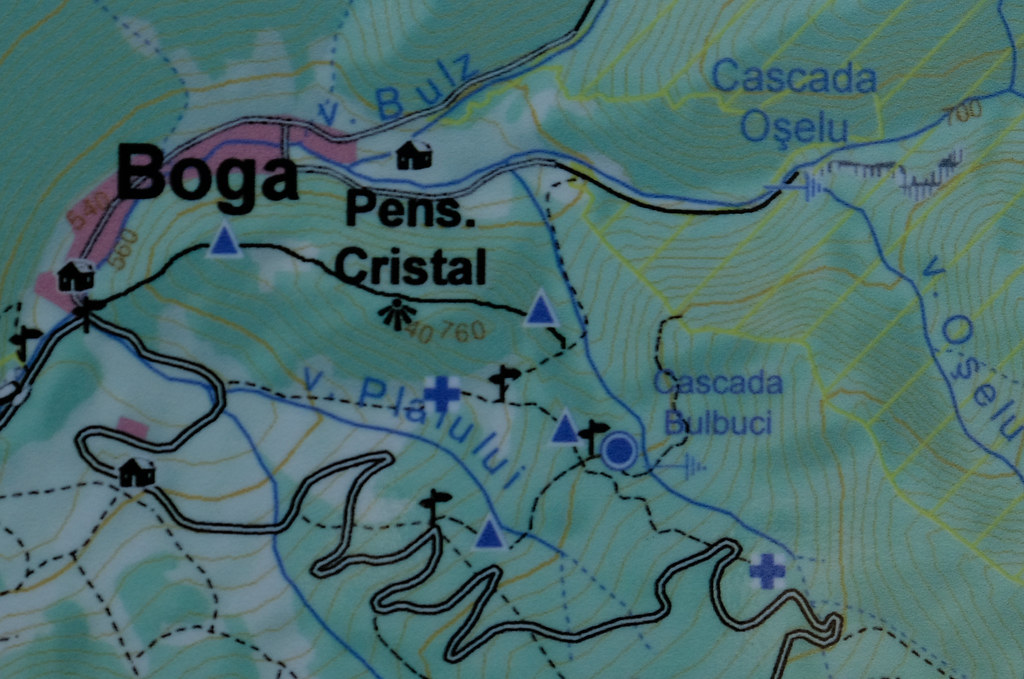 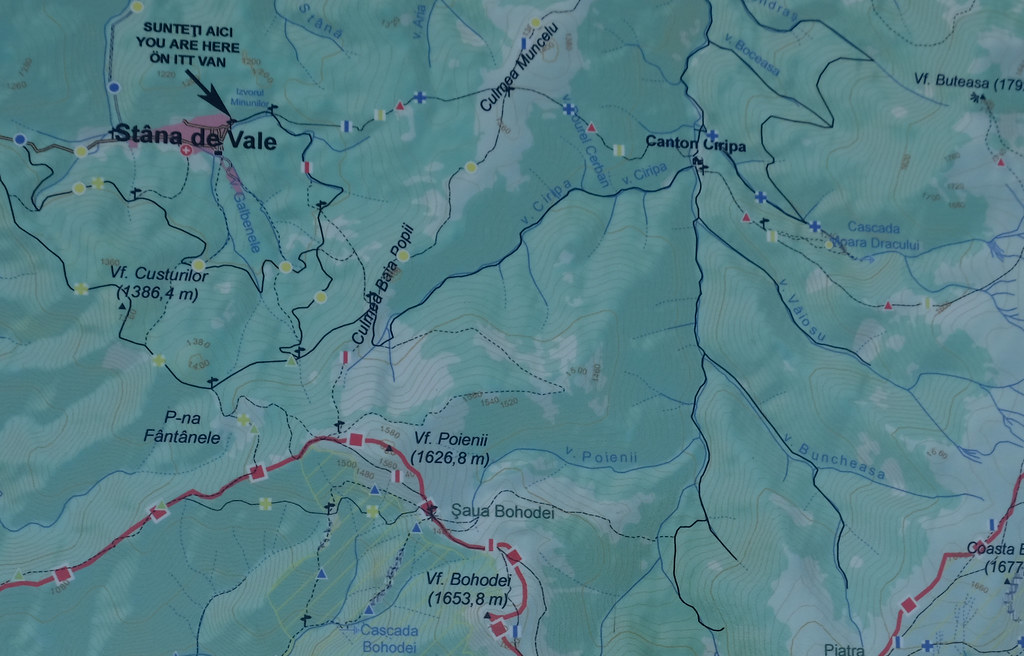 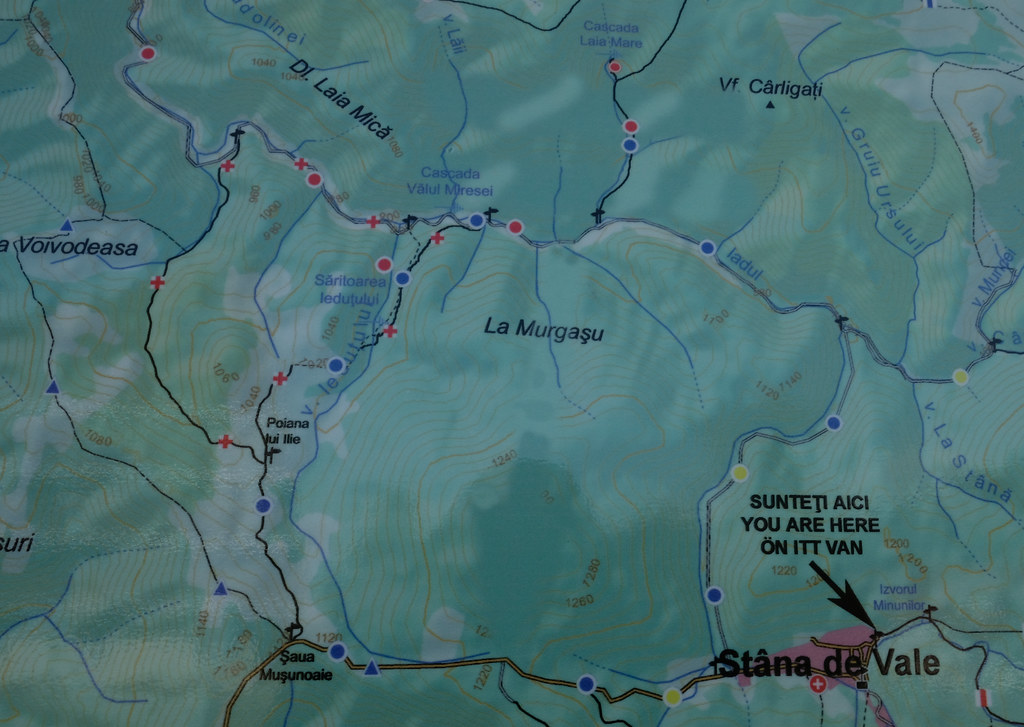 The most straightforward choice for accommodation is either the village of Padiș or Stana de Vale. Since we started most of our longer hikes from Stana de Vale, we booked a simple hotel room there. We had no problem finding available rooms only a week before our trip, but summer could surely be busier.

The closest larger city is Oradea, but that’s almost 2 hours drive from most trailheads. There’s no highway in the area, so you better choose accommodation as close to the trailheads as possible if you don’t want to spend too much time driving.

Have you hiked in the Carpathians? Any favorite trails?