The Székely Land is a special part of Transylvania. Though it’s in the heart of Romania, it’s inhabited mainly by the Székelys, a Hungarian-speaking ethnic group. It has its own history, culture and traditions. And it also offers some unique natural beauties that we’d like to show you in this post.

But where exactly is the Székely Land? In the southeastern part of Transylvania. It includes Harghita, Covasna and parts of Mureș counties. Its largest city and cultural center is Târgu Mureș (Marosvásárhely in Hungarian).

To us visiting the Székely Land felt like discovering a home we haven’t known before but where we’ve always belonged to. They speak our language. They make us feel like arriving home. We know their legends and history, because it’s part of the Hungarian heritage. We know their landscapes from our poems and novels. 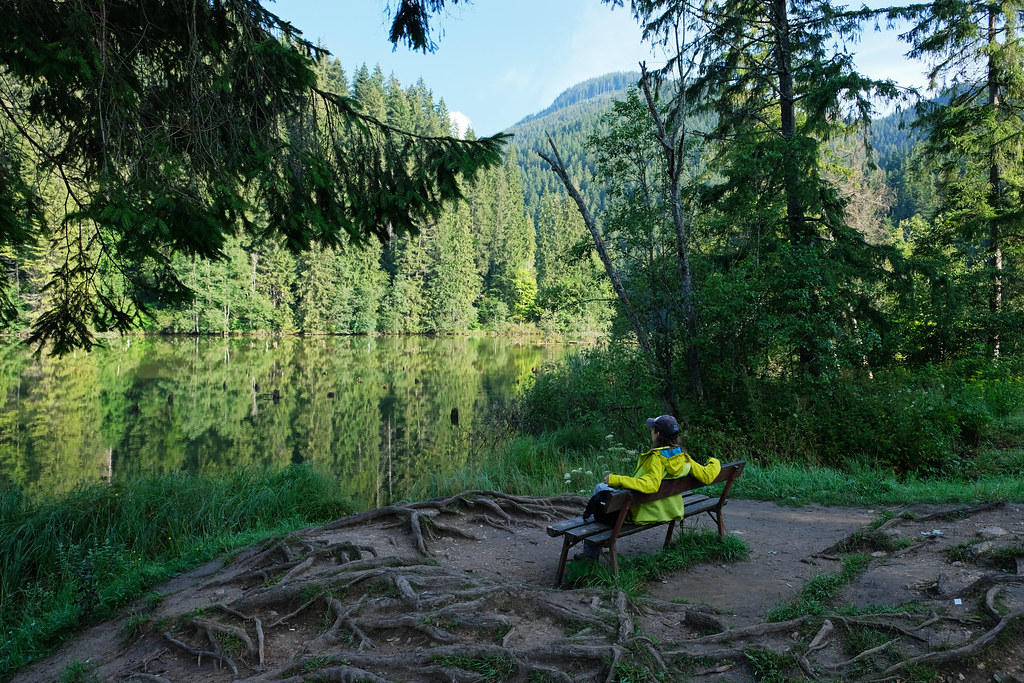 And behind every legend there’s an amazing piece of reality. That’s what we want to show you now: the beautiful places from these Székely legends.

So once upon a time, there were two castles built on top of two neighboring mountains. Two brothers lived in them who were jealous of each other and were in constant competition who is more well-off. One of them took possession of a wonderful carriage towed by six proud horses. His brother couldn’t stand that, and he bet that within a day he could find a more unique carriage with twelve horses. But it was not easy.

Finally, he had an idea. He ordered the most beautiful girls of the region to come to his castle. He chose twelve of them to tow his carriage, including Ana, the prettiest one who was leading. They couldn’t even move the carriage though, so the lord got angry and started whipping them. He hit Ana who cried out loud. Then he hit her again, and she cursed the lord. Suddenly the earth started moving, and the castle with its evil lord got buried. The place where the castle stood became a lake and twelve swans swam there peacefully. 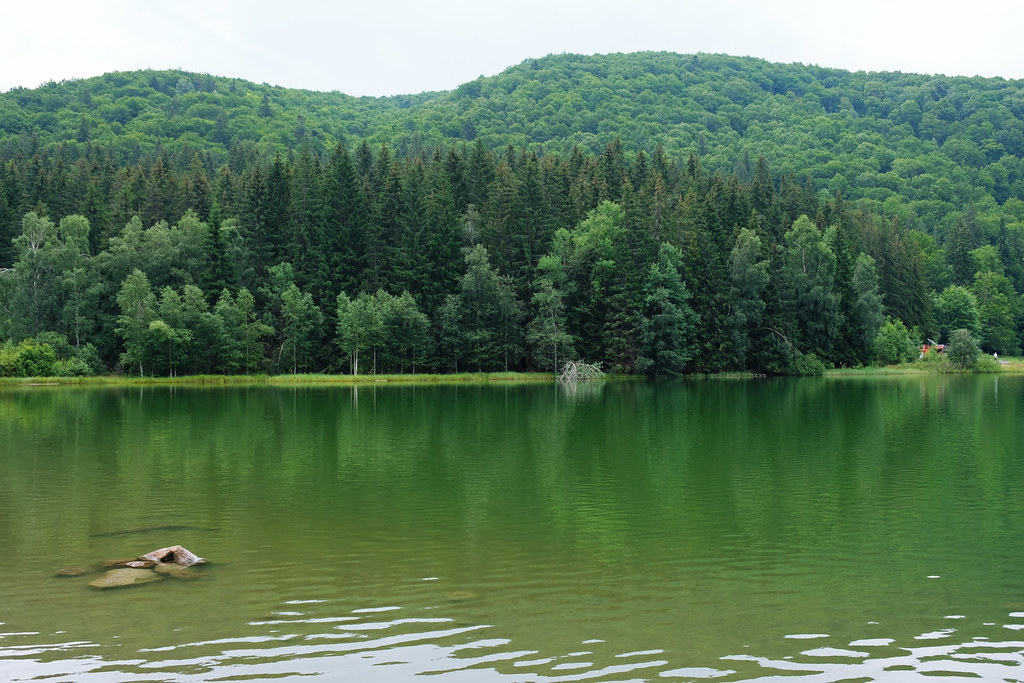 It’s what we know as Sfânta Ana Lake today. Its real origin is just as exciting as the legend as it’s the only crater lake in Romania. It’s located in a volcanic crater that was formed about 32000 years ago. Though you can’t see the crater today, the oval form of the lake reminds us of this fact.

There’s an easy loop trail around the lake. Its green color was spectacular even on that cloudy day when we visited. It’s surrounded by pine forests, and locals say that bears are also keen on visiting the area. Our only bad experience was getting there as the road leading into the Natural Reserve of Mohoș is in a horrible condition (lots of large potholes as the harsh winters damaged the road). 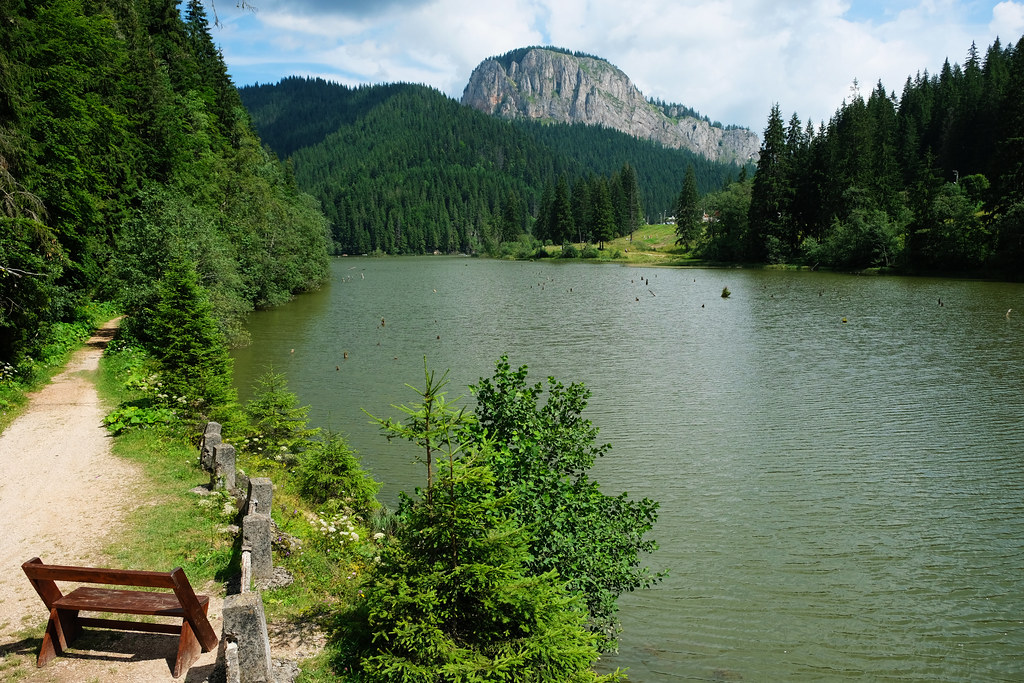 Once upon a time, a beautiful girl lived in these mountains who fell in love with a handsome young man. But before they could have been married, the man was taken to war. She was waiting for his return, she cried for hours every night so that even the surrounding mountains felt sorry for her.

One day a thief, who was passing by, saw her and fell for her immediately. He promised her the world if she marries him, but she was faithful to her fiancé. The thief lost his patience and forced her into marriage. She cried for help to her beloved mountains. Suddenly a heavy storm arrived, stones buried everything in an earthquake. The next morning the golden rays of the rising sun illuminated a lake in the valley. Its water was red. It’s called the Killer Lake (Gyilkos-tó) by the Hungarians. 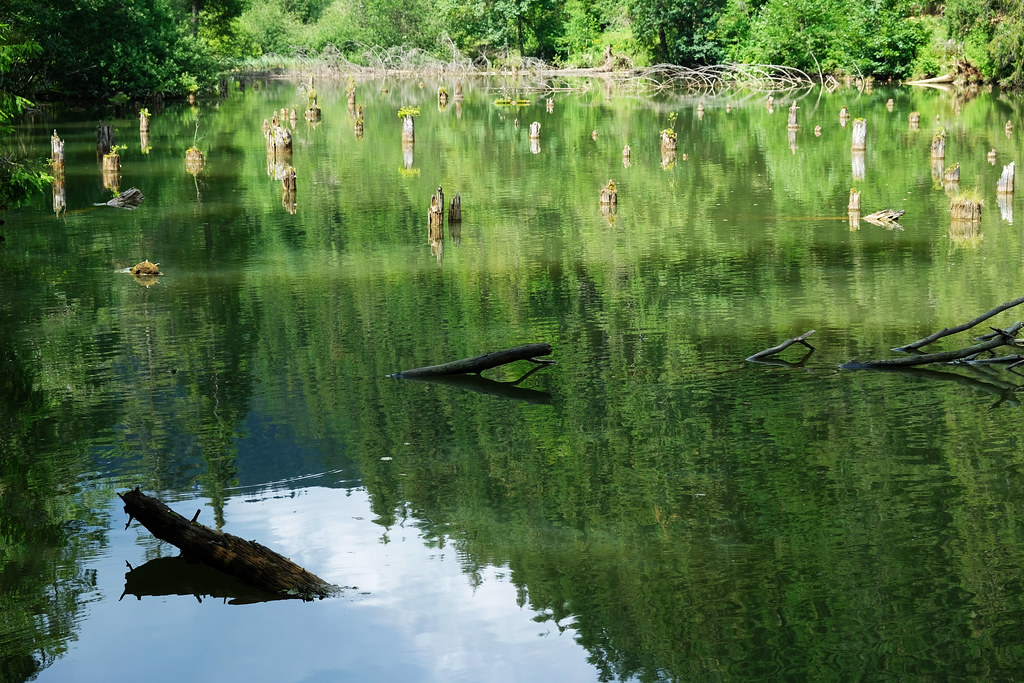 Red Lake is probably Romania’s most unique lake – and quite a photogenic one, as well. The stumps in the water are remnants of a flooded pine forest. But its red color is not because of the blood of the pure girl and the thief rather because of iron oxides. By the way, it’s more greenish than red these days.

The loop trail around Red Lake is a stunning walk with views of Kis-Cohárd peak. In calm weather the surface of the lake becomes a mirror reflecting the surrounding forests and cliffs. We did the loop walk within an hour, then decided to conquer 1344 meters high Kis-Cohárd peak. It was a nice, scenic hike that offered views of Red Lake and the valley from above. 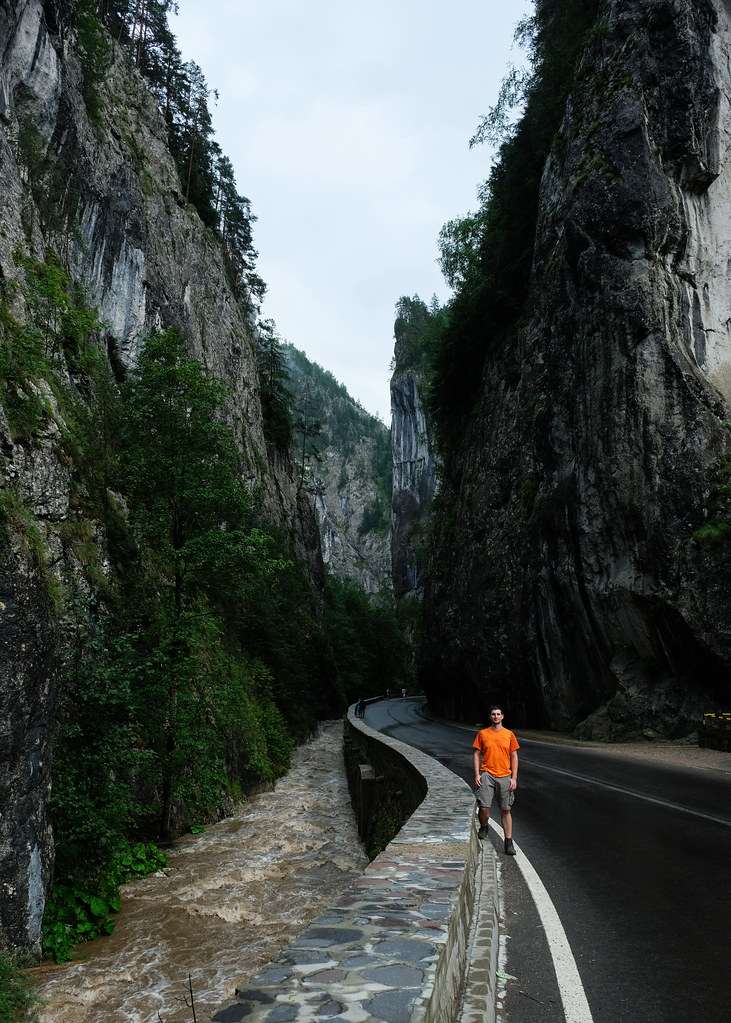 Bicaz Gorge and Red Lake are usually mentioned together, because they are so close to each other. Once you’re there, it’s worth visiting both of them.

Bicaz Gorge was formed by Bicaz River over millions of years, and its 200-300 meters tall rocky mountain walls are truly impressive. The gorge can be best explored by driving through it and stopping at the small parking areas and pullouts. The view is so amazing all the way that it could make for a nice hike. But the thing is there’s no hiking trail in the gorge. Since the road is busy with cars, we gave up on walking too much. Instead we stopped as often as we could to get off our car, walk around and take tons of pictures.

Spending the morning at Red Lake and Kis-Cohárd, then finishing our day at Bicaz Gorge made for a perfect one-day visit to Bicaz Gorge-Hășmaș National Park. 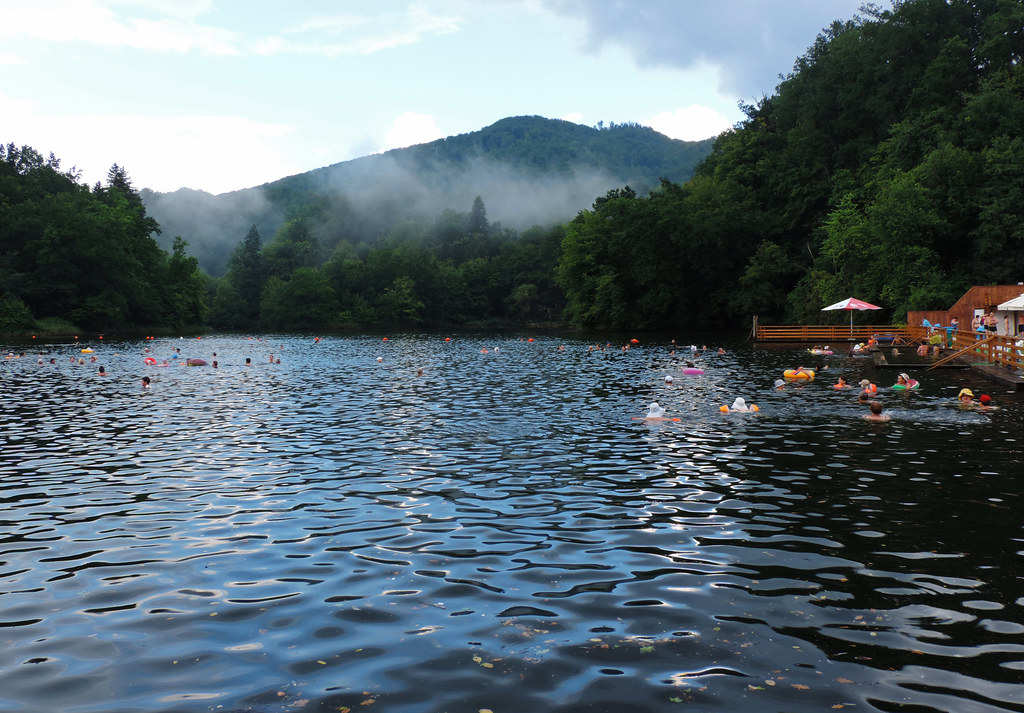 Once upon a time, a fairy woman lived in these mountains who fell in love with a shepherd. One day when she wanted to meet with her love, she noticed him kissing with a beautiful girl. She became furious and transformed them into stone. But she never found happiness. She wandered around the mountains and couldn’t stop crying. Her tears created a salt lake what we know as Bear Lake today.

The less dramatic reality is that Bear Lake was formed in 1875 when a salt mine collapsed, and rainfall and streams filled the area with water. It’s a heliothermal salt lake, and it’s water can be as warm as 35°C due to this heliothermic phenomenon.

There’s entrance fee to access the lake as it operates as a spa today. To preserve the heliothermal effect, bathing is restricted every day for two hours to let the lake some rest. Otherwise we could enjoy the pleasantly warm water and sunbathe on the deck.

There are trails and promenades around the lake, and it’s nice to have a walk. We got excited that there are four more, smaller salty lakes along the way, but it turned out they are more swamps than actual lakes.

What else to see? 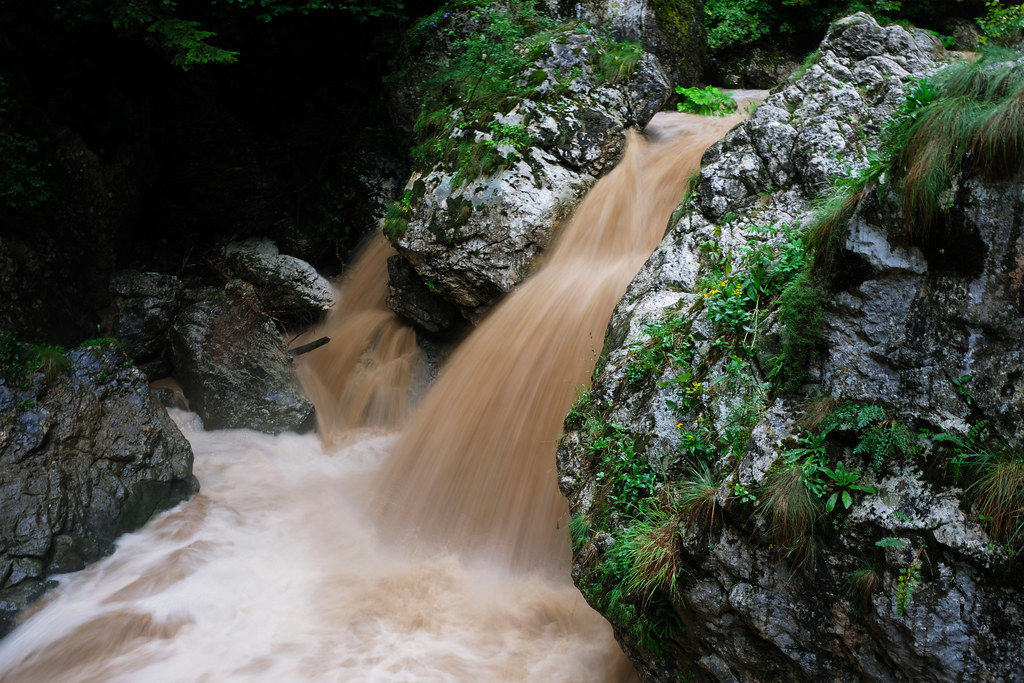 The list of special sights of the Székely Land is far from complete. It was a teaser – both for us on our first trip and for you as we share it. There’s a lot more…

If you’re into sightseeing, culture and beautiful architecture, you can visit Târgu Mureș. Or you can go under the ground and explore the Salt Mine of Praid. If you’re a nature lover, you can hike the iconic mountain of the Székely people: Hargita.

Have you been to the Székely Land? What are your favorite sights?