Australia is a vast continent, and there’s an incredible number of beaches all along its coastline. Fine, perfectly sandy, pretty beaches. Unspoilt bays with all the shades of azure and turquoise. The kind you see on postcards, and then you instantly imagine yourself jumping in for a swim. Well, you better exercise some caution before doing that in reality. Because of all those countless beaches there are surprisingly few that are safe to go for a swim in Australia. Actually, I think the number of those beaches is close to zero. 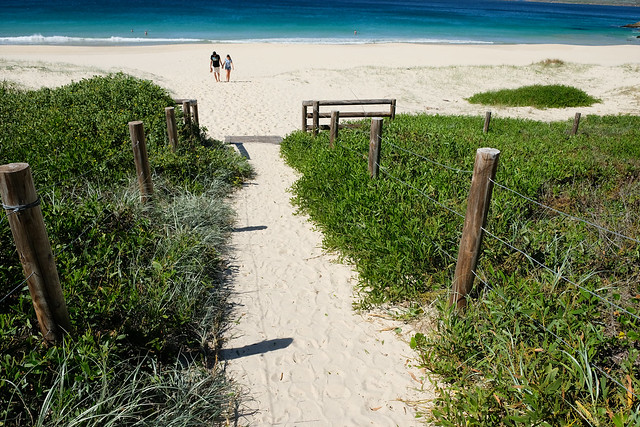 And if I didn’t manage to scare you away with this introduction, you deserve to know about all the best swimming beaches. I do my best and share with you all the ones that we loved during that 3 weeks we’ve spent exploring the Eastern coastline of Australia. But first, some words of caution…

Why Australian beaches can be so dangerous? 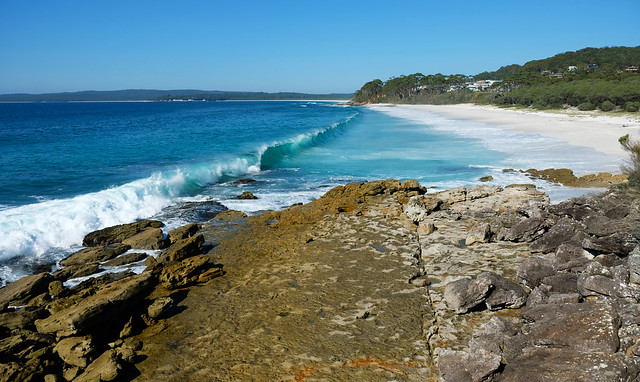 Well, there are some unfriendly creatures that can be found in the water in certain areas along Australia’s coastline. Like estuarine crocodiles (mostly near estuaries in the tropics), box jellyfish (in the tropical waters, mostly in the summer) or sharks (well, almost anywhere). But if you pay attention to warning signs posted on the beaches, you shouldn’t have too much trouble with them.

It’s worth checking when exactly the “stinger season” is in the area you visit – it applies to the tropical waters only, and it’s the season when dangerous jellyfish can be found in the water. (Actually, some species are deadly, and they are often referred as stingers – hence the name of the season.) Stinger nets and full-body lycra suites (also called stinger suites) can help you minimize the risk of getting stinged.

Watch out for strong currents! 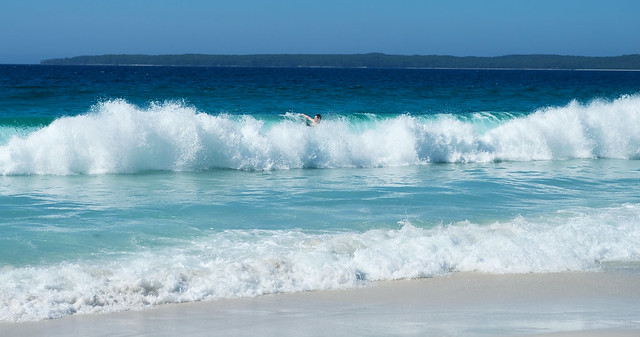 But what seems to be even more dangerous than any of the above mentioned animals according to the death statistics are strong ocean currents. Most of the Australian beaches are facing the open sea. That means giant waves and strong currents. The general safety rule is to swim only at patrolled beaches between the yellow flags.

With that said, not all of the beaches are patrolled, of course. I’d risk a guess that Australia has more beaches than inhabitants. The point is, it’s impossible to safeguard all the beaches. So a beach without safety flags can still be safe, but you probably won’t know whether it really is. Asking the locals can be a good idea – I mean, if there’s anybody around. Otherwise be extra cautious and don’t go deep if you decide to take the risk. Respect the ocean, it’s much more powerful than you are.

Australian beaches are beautiful – without the crowds 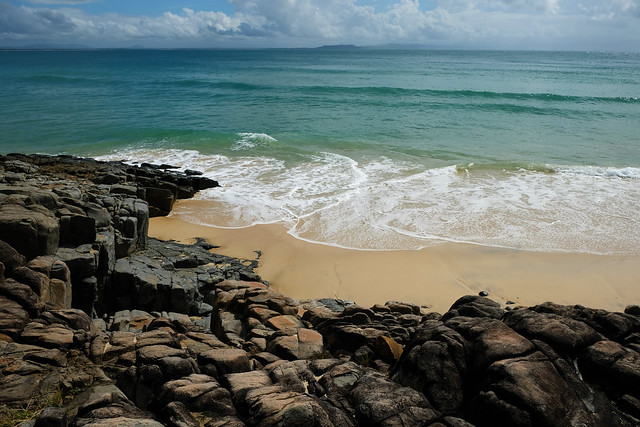 Other than strong currents, there’s another thing that Australian beaches has in common: their incredible, unspoilt beauty. In a strange way that’s their disadvantage, too. After the hundreth perfect beach, you take their perfection for granted.

Also, we were shocked to see some of those magical beaches almost completely empty. There’s no such thing as a crowded beach in Australia (even though locals consider some of them busy and crowded, don’t believe them, they measure by a different standard not known anywhere else in the world 😀 ). I guess, there are just too many beaches compared to people. Awesome country, hah? 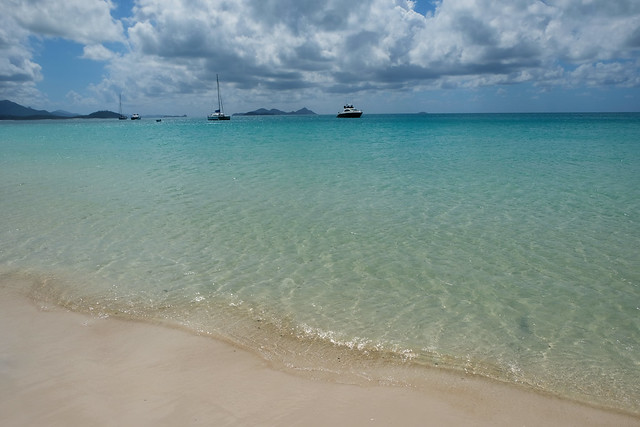 Not so easily accessible, but oh man, it’s the most beautiful beach in the world! Pure white sand, turquoise water and hardly anyone on the 7 kilometres long Whitehaven Beach. If you don’t own a yacht, your best chance is to sign up for a day cruise to visit it. 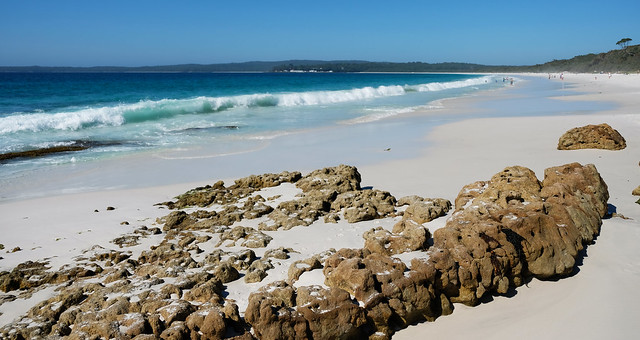 If Whitehaven Beach has a match on the mainland, it should be in Jervis Bay. The sand there is also white, the kind of white we haven’t seen anywhere else along the coast – or elsewhere in the world. It makes the color of the water magically turquoise. Hyams Beach is one of the longest beaches in Jervis Bay, and it’s also among the safest ones. 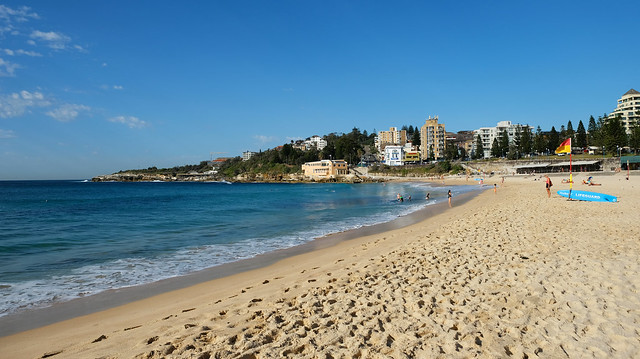 Coogee Beach is one of the awesome city beaches in Sydney. They all have incredibly clear water, cool facilities (usually lifeguards, as well), but we enjoyed swimming the most at Coogee Beach. It’s relatively small, it has a cosy vibe, and it’s kind of protected. (That “kind of” just always happens to be there in sentences about safe beaches in Australia. Again, currents.) 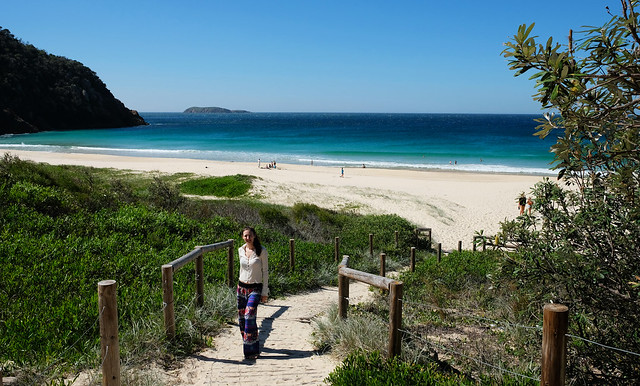 What a gem we’ve found when we stopped for a couple of hours in Shoal Bay! We ended up spending all that time on Zenith Beach. Surrounded by green hills and forests, it also has fine sand and crystal clear water. Currents were a bit strong, but the water is shallow enough so that we could enjoy the large waves. 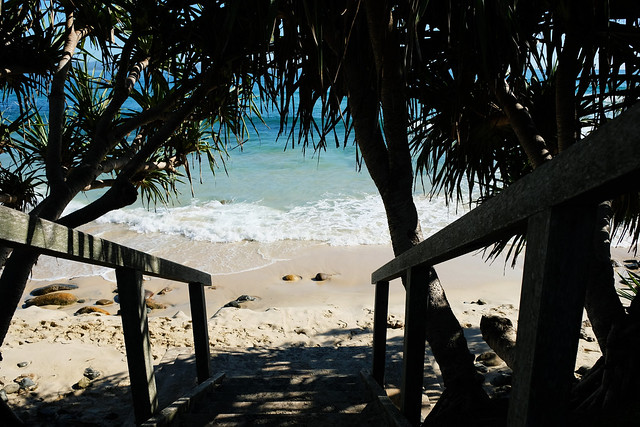 Byron Bay is famous for a good reason: it offers some of the best swimming beaches in whole Australia (also, the most expensive holiday homes). Wategos Beach is not the biggest and busiest beach in Byron Bay, and probably that’s why we loved it so much. 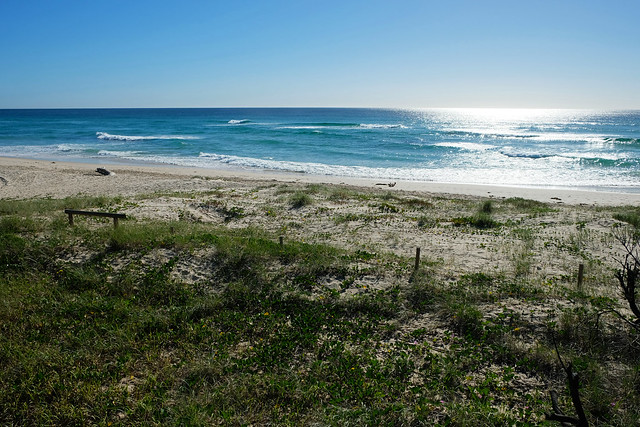 We stopped quite often on our way from Sydney to Brisbane. The reason was usually a wonderful beach we couldn’t resist. Fingal Head Beach was one of them. Though only a few people were present on the beach, it was patrolled, and we enjoyed swimming in the giant waves very much. Well, swimming is maybe an exaggeration, currents rather just carried us, but we had fun. 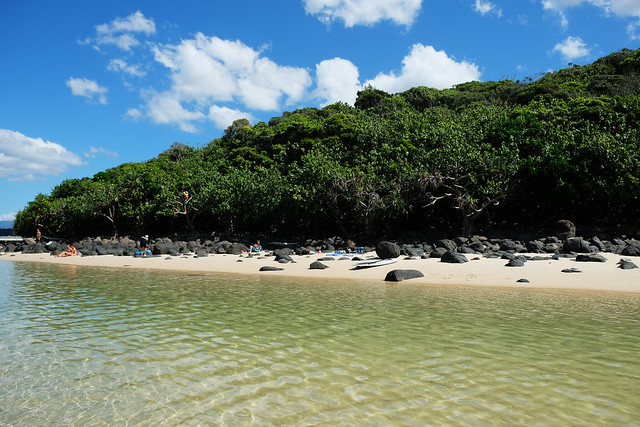 Burleigh Head National Park is worth a visit in any case. It offers a nice and easy coastal walk, and also some beautiful beaches. The usual. 😛 Echo Beach is actually located at an estuary, and it doesn’t face the ocean but the river. Because of that the water is quite calm (except where the river currents are strong), and it’s an easy place to swim. Water is shallow in the beginning, it’s an ideal playground for kids. 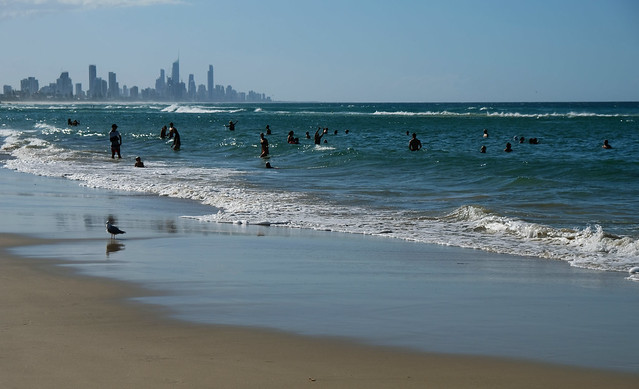 Burleigh Heads Beach is a large and busy one (well, compared to other beaches, because I’m telling you, we haven’t found any truly busy beach in Australia). It has a pleasantly lively vibe and great views of some large skyscrapers as a backdrop. The big bay is relatively well-protected. 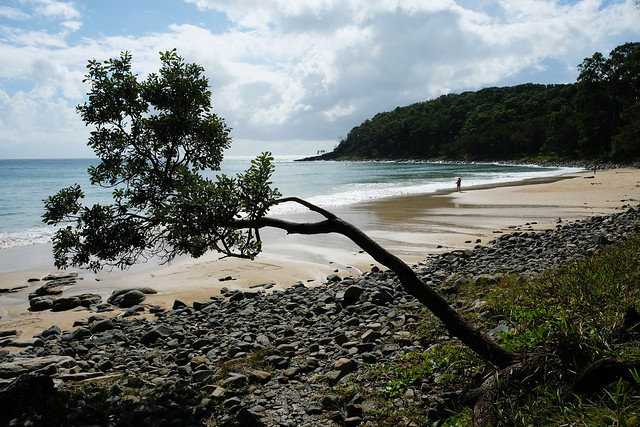 Noosa National Park is the gem of the Sunshine Coast (and the only place where we got soaked in a real tropical downpour – life doesn’t lack humour). Our favorite was not the (otherwise long and perfect) Main Beach, but a smaller, cosier one called Little Cove. Unlike on Noosa Main Beach, there was no lifeguard here, but quite some people swam, and we happily joined them. 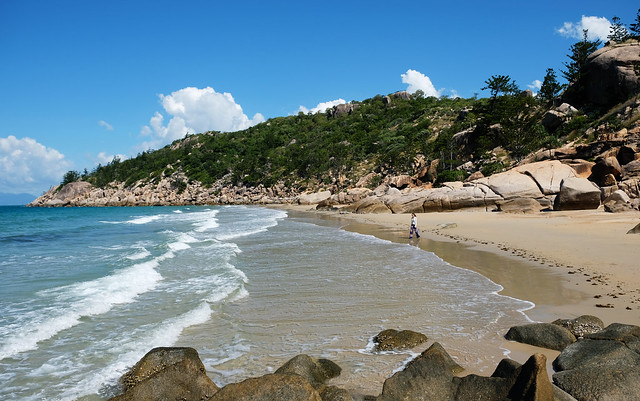 Magnetic Island is accessible by regular ferry from Townsville. We spent a day exploring this pretty little island and its beaches. Rocky Bay was our favorite. It requires a short, but steep hike, and it’s the kind of beach that even Australians would call abandoned. We were alone on the beach all afternoon – and it was a hot and sunny Saturday! Rocky Bay was our romantic little corner with impressive rock formations towering above us.

Have you found such an abundance of wonderful beaches anywhere else in the world? Share them in the comments!